The Oculus Quest is sleek, powerful, simple to use and – as of recently – totally defunct

Not that the Oculus Go isn’t a great little headset – we remain convinced that it makes real progress in the race to make VR accessible. In theory, however, the beefed-up Oculus Quest ought to blow any previous efforts right out of the water. It promises the same totally wireless, put-on-and-play experience as the Go, albeit with extra power and some seriously impressive new tech to help make those VR experiences even more entertaining.

Oculus Quest review: What you need to know 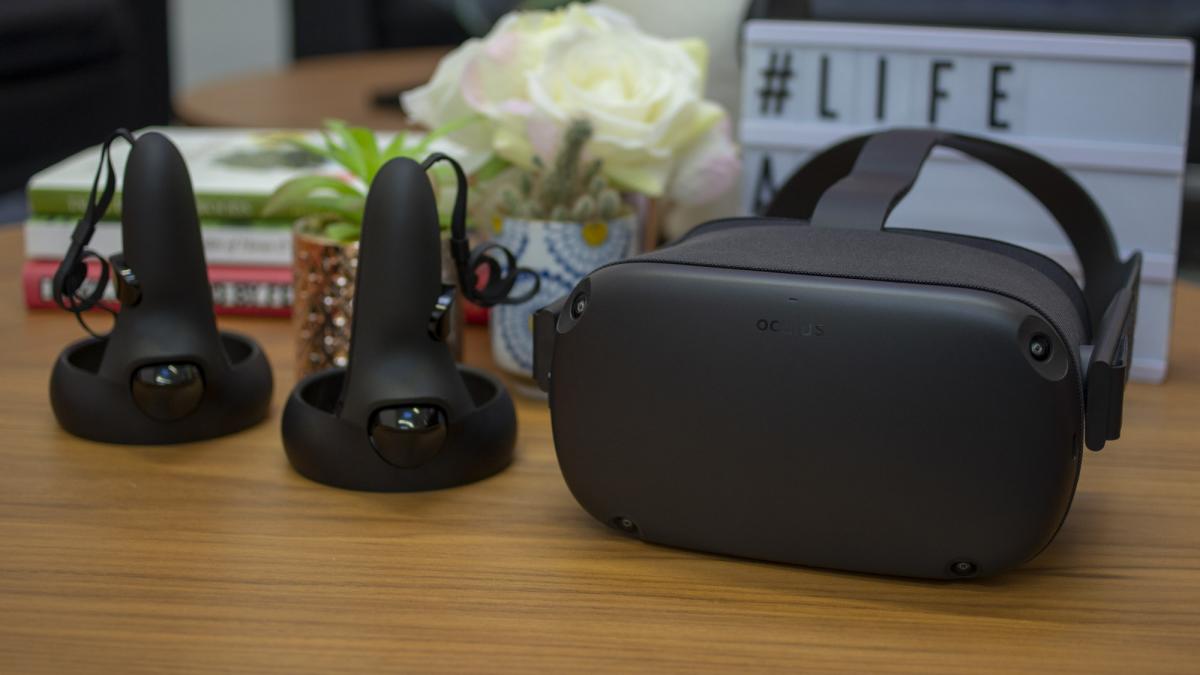 The package contains the headset and two controllers, plus a power lead and plug, two AA batteries and a spacer for users who wear glasses. There’s no such thing as a totally wireless VR headset – the Quest must be charged – but this is as close as you’ll get.

With a Qualcomm Snapdragon 835 and a 2,880 x 1,600 OLED display inside, the Quest is no slouch, although it obviously won’t play games as demanding as Skyrim or Doom. I reviewed the 64GB version here, the smaller of the two storage sizes available (128GB being the larger option).

The 64GB version of the Oculus Quest costs £400, which is the same price that the original Oculus Rift launched at back in 2016. If you’re planning on downloading the entire Oculus game library, the 128GB model costs £100 more. It might sound like a lot of money, but remember you don’t need a souped-up gaming PC to run it, and it’s certainly not the most expensive VR headset you can buy. That honour goes to the HTC Vive Pro, which costs an alarming £800. 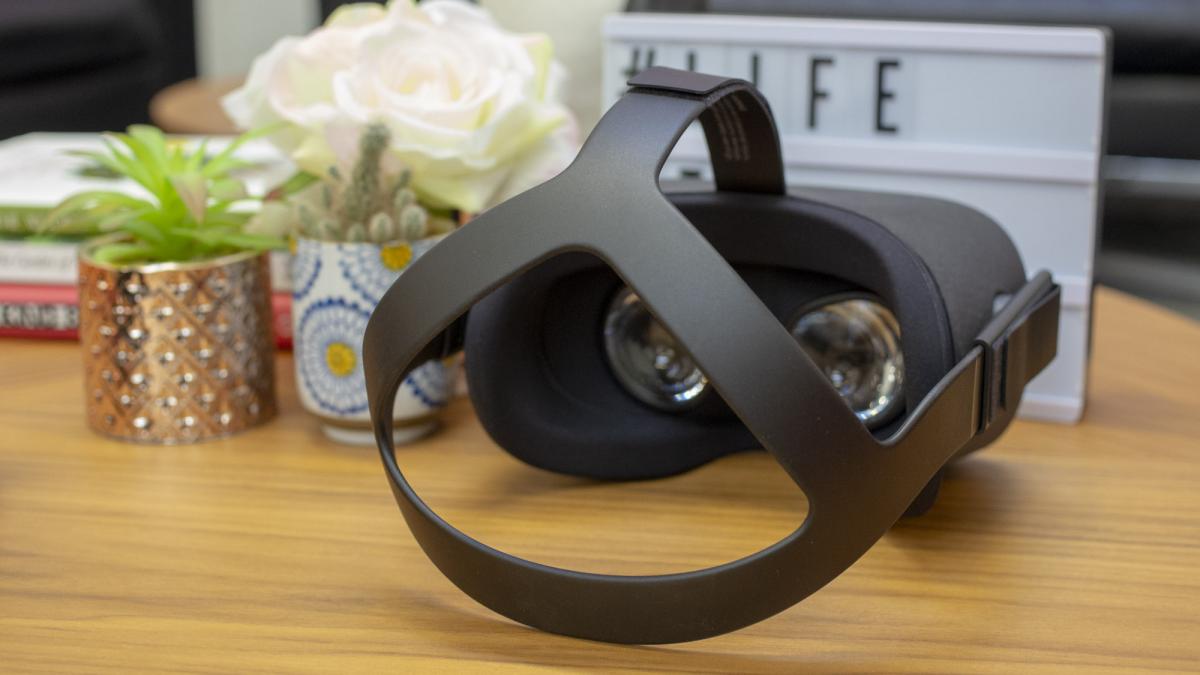 For the same amount of money as the Quest (64GB), you can buy the venerable Oculus Rift or a Windows Mixed Reality headset such as the Lenovo Explorer. Of course, the Quest differs from headsets like this by being totally wireless, so the nearest competition actually comes from the likes of the phone-powered Samsung Gear VR (£120), Google Daydream (£99) and Oculus Go (£200) headsets. They might be a lot cheaper, but none of these headsets put up a particularly fierce contest.

Oculus makes good-looking stuff, I’ll give them that. The Quest is a particularly handsome machine: the all-black finish and textured fabric exterior contribute to the feeling that you’re wearing the tech equivalent of a brand-new car. There’s something particularly striking about the front panel, a matte-black affair with four external cameras inlaid into each corner. 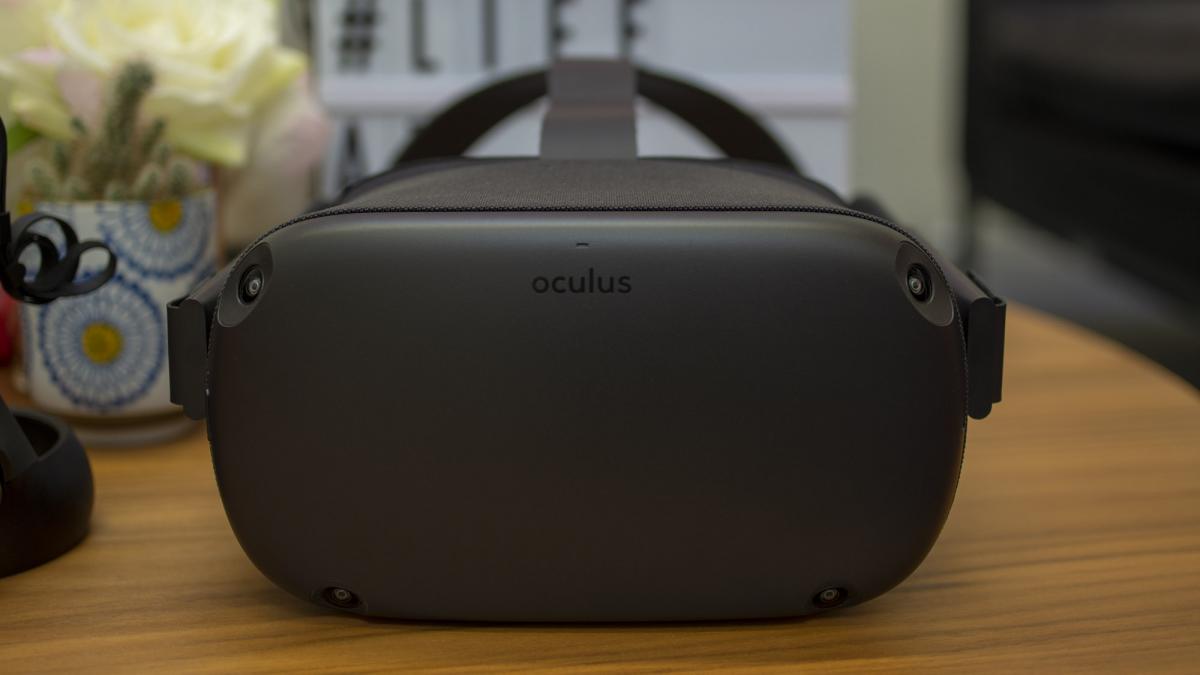 The rubber headband does feel a bit cheap in comparison, however, and there’s no denying that it can be a bit unwieldy; the velcro adjustment mechanism at the top of the headset requires two hands and a fair amount of patience. That said, the Quest certainly isn’t lightweight – weighing in at 571g – so the headband does a very good job at keeping the headset strapped to your face.

The two motion controllers that come with the Quest are equally stylish, although it’s their functionality that marks them as a cut above the competition (more on that later). The only downside is that they’re each powered by a single AA battery. They’re far from power-hungry, but whenever they do need changing, this comes with an added cost. 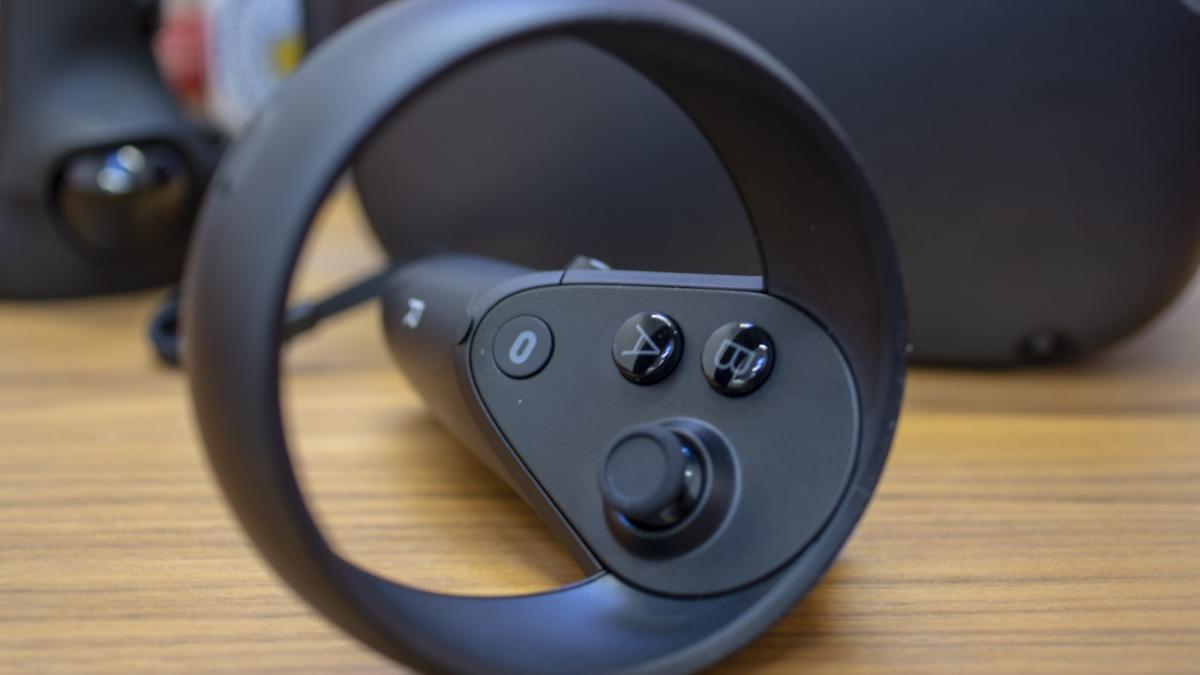 Lined by foam, the eyepiece is comfortable, although tight straps invariably result in the much-maligned “ski goggle” effect. The nose arch is weirdly angular and so, unless you’re blessed with a sizeable snout, you’re likely to notice a bit of light bleeding through the gap. Otherwise, the combination of the complex adjustable headband and foam-lined eyepiece keeps the darkness at maximum.

On the lower edge of the headset, you’ll find a volume rocker and slider. The slider adjusts the distance between each lens, a function introduced by the original Rift – it might not be new, but I was smitten with the fact that I didn’t need to wiggle the headset about constantly to find a decent viewing position. 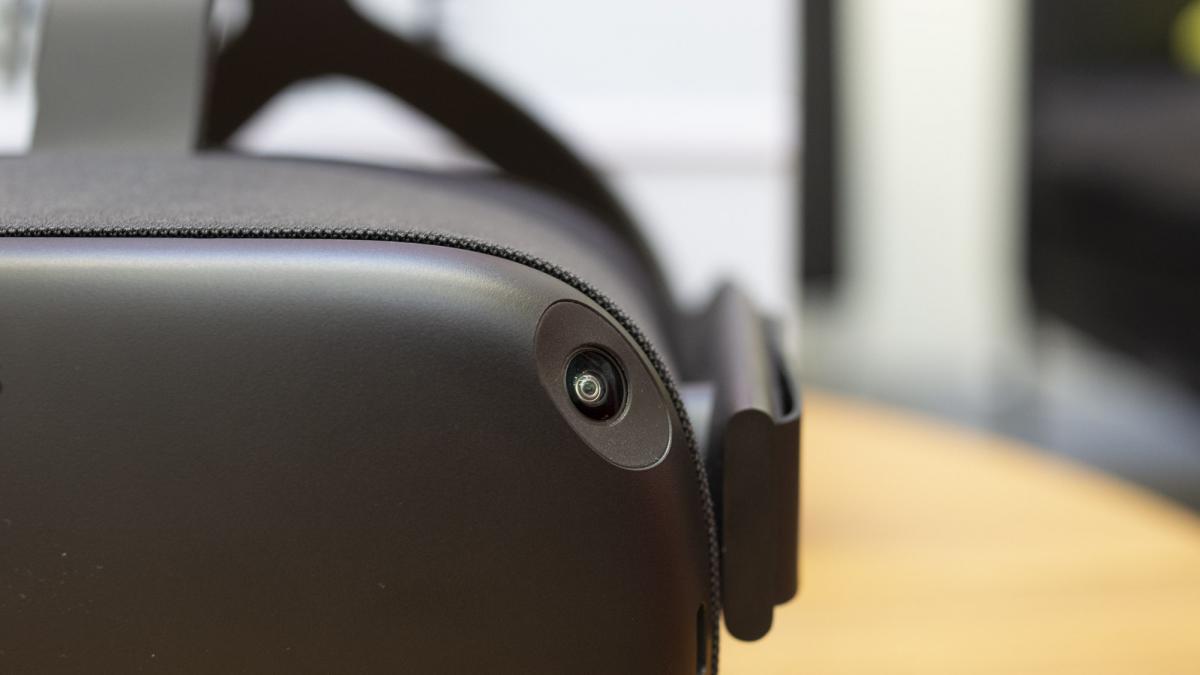 Thanks to the four tracking cameras, the Oculus Quest has a nifty “see-through” feature that allows the user to see their surroundings in real(ish) time without removing the headset. It’s never going to be a pristine image – the Quest displays your surroundings in grainy black and white – but it’s a helpful feature nonetheless, particularly when you’re trying to map out your play area or take a brief pause. 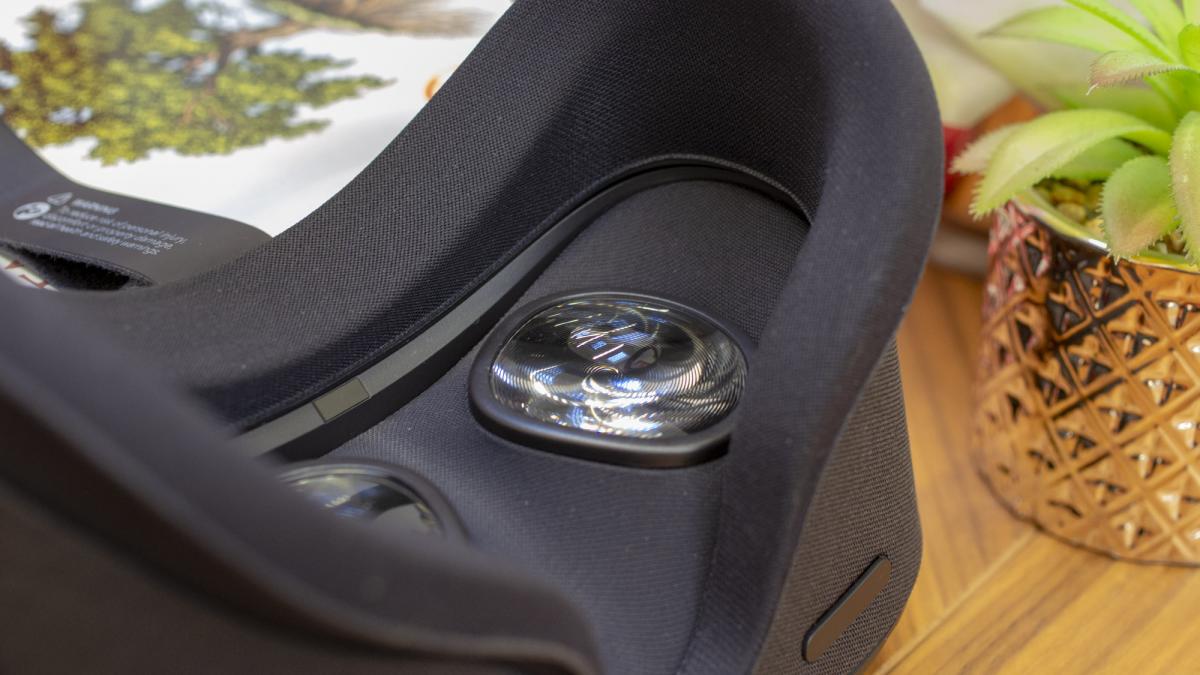 A respectable resolution means that the “screen door” effect (whereby individual pixels produce a visible grid onscreen) is as minimal as you might hope. The viewing angles are wide enough that the black rims disappear from sight quickly and, as I’ve already mentioned, the snug straps and adjustable lens distancing make finding a clear image incredibly simple.

The display might not be entirely faultless, but it still provides an effortlessly impressive viewing experience. And better still, it isn’t the only thing that makes the Oculus Quest so unique.

Oculus is dedicated to providing a sizeable library of cracking VR games and, at long last, it’s starting to deliver. The choice of games on the Oculus Store is comfortably better than the dismal offering on the Microsoft Store, although it can’t quite match the SteamVR section for sheer quantity.

A Snapdragon 835 processor means that the Quest can run more advanced VR titles without needing a compatible PC/laptop. This is undoubtedly where the Quest shines: titles that involve plenty of movement such as Superhot VR work best without the cables. Of course, you’ll likely run into some limitations, but a wireless VR headset will have to make some sacrifices and Oculus still hosts the best selection of VR games this side of Steam. 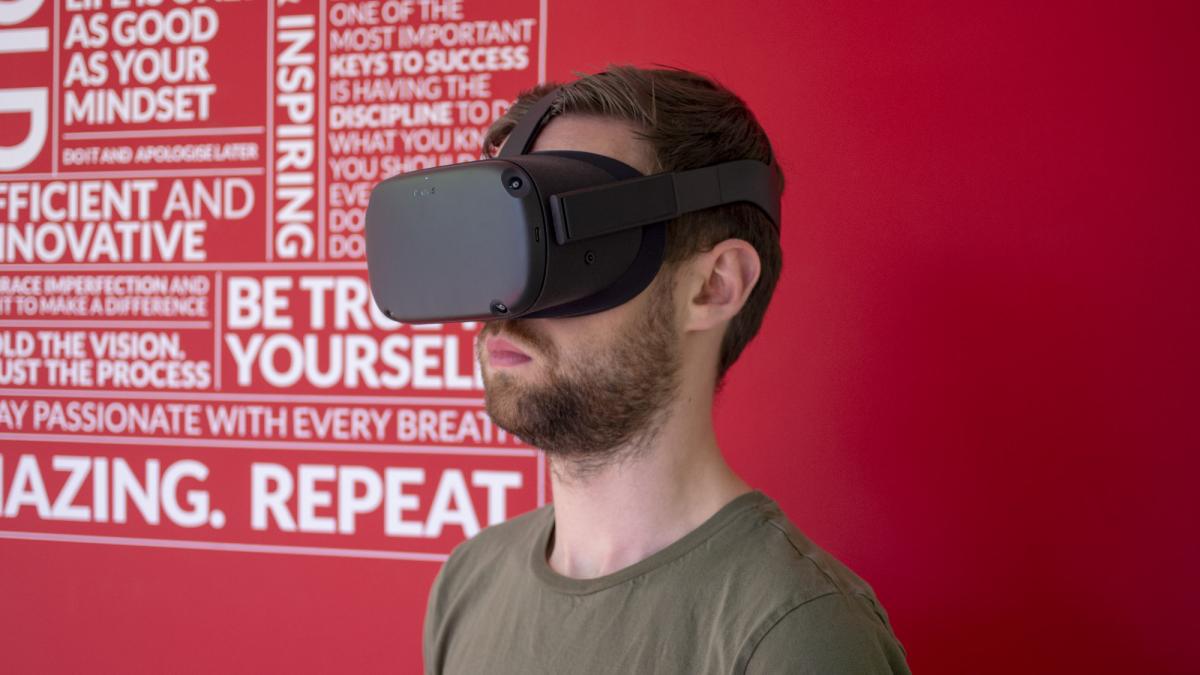 There are currently around 50 games on offer, with plenty more – such as Star Wars’ impressive-looking Vader Immortal – well on the way. And, of course, there’s nothing like knowing you can twirl and spin and make a fool of yourself without fear of ending up coiled in a mass of wires.

And you really can twirl and spin (and duck and dodge). The Oculus Quest supports six degrees of freedom (DoF), which is pretty standard stuff for more advanced VR headsets; all it means is that the headset is capable of tracking your movement in a three-dimensional area – like moving side-to-side or forwards/backwards. But in a space of your own choosing, without cables to limit your movement, VR becomes a wonderfully energetic experience.

Complementing the fun is the Oculus controller, which translates your inputs into something a little more human. The controllers appear on-screen as a pair of hands, which means your interactions with objects in-game take on a more tactile edge. This is not new technology, of course, but it’s still fascinating to engage with and is a cut above the competition.

As well as the usual platter of VR games, the Oculus user interface also gives you access to social media, web browsing and catch-up TV. It’s really down to personal preference as to whether or not you want to watch Game of Thrones in VR; there’s something to be said for the cinematic experience VR offers, but it’s not exactly sociable.

It should be clear by now that the Oculus Quest has one crucial selling point. The display is suitably impressive, the software is intuitive and content-rich and the build quality is as high as you could hope for – but none of these things are revolutionary on their own. Instead, it’s the lack of hindrances (be that cables, sensors or gaming PCs) that marks the Quest as unique. It’s not perfect, but it’s far and away the very best VR has to offer.

Don't miss a deal at Brian Tracy
Best offers at Boohoo
Discounts, Sales and Deals at Surfdome
Save your money with Nike DE
Online-Shopping with The Home Depot
Best products at Marks and Spencer
Latest Posts