Google’s first streaming stick took a moribund industry and made it cool again when it was first launched back in 2013 but, despite introducing several new versions in the intervening years, the basic premise has remained unchanged. Now, Google has finally given in to the streaming traditionalists and is launching a version with not only a remote control, but also its very own user interface: Google TV.

The new streamer streams TV and movies at up to 4K as standard – a feature previously reserved for the Chromecast Ultra – and it supports both HDR 10 and Dolby Vision. The new Chromecast also introduces a new look. Instead of the small circular puck of old, it’s now thinner and more stretched out and it’s available in three colours: blue, pink and white. 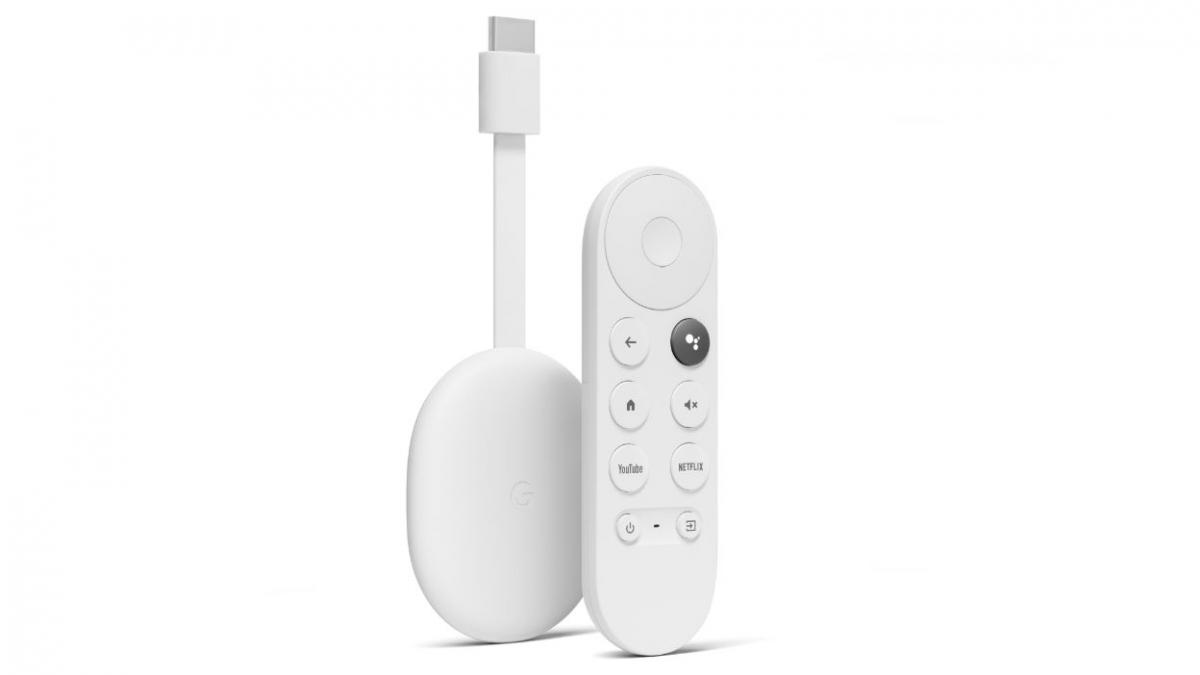 It connects to your TV in a similar way to previous Chromecast devices: you simply plug it directly into the HDMI port on the rear of your TV and then hook it up to USB power. A mains adapter is supplied, which Google recommends you use, but you can power it via a USB port on your TV if it’s powerful enough. And, despite the new remote, you’ll still be able to cast movies, TV and audio in the same way as you could with previous versions.

The remote control does make this a very different device, however. Like the Amazon Fire Stick’s voice remote it has a button to activate voice control – here Google Assistant instead of Alexa – and you can use this to search for content or control video playback. 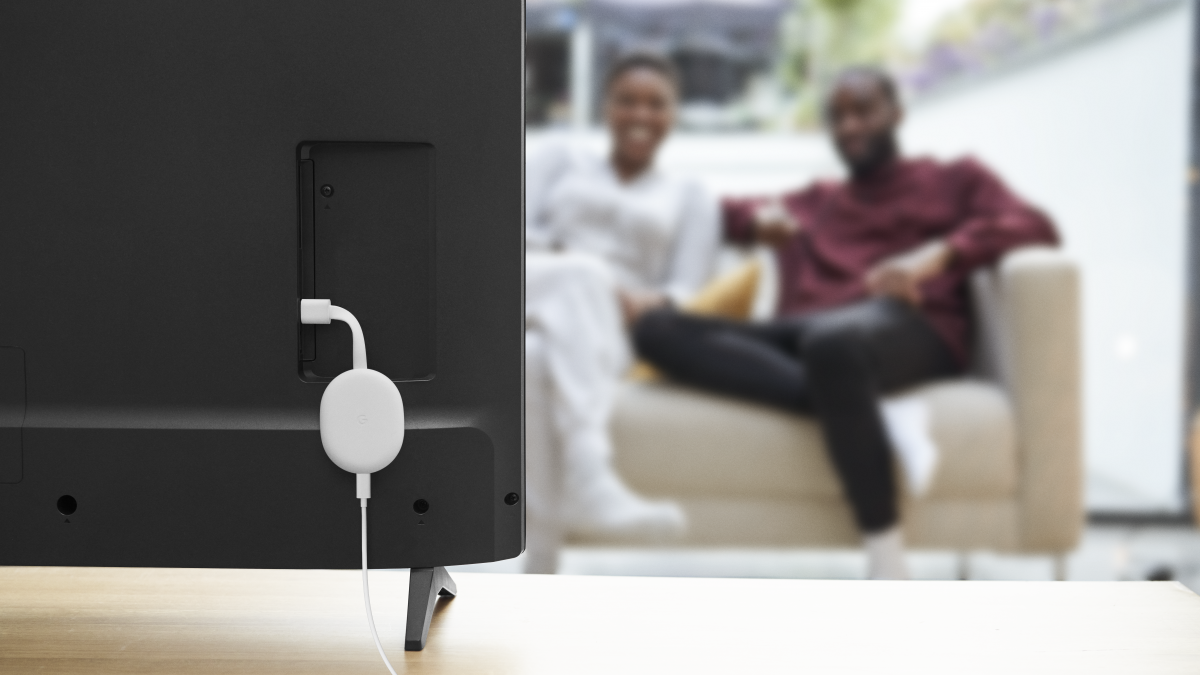 And the voice button sits alongside a number of other handy controls. At the top is a circular clicker for navigating and selecting options, below this is the Back and Google Assistant buttons, and these are accompanied by Home and Mute plus shortcut buttons for YouTube and Netflix.

The remote control also has an infrared transmitter built-in, enabling it to turn your TV on and off and switch inputs. Essentially, there’s no longer any need to use your phone at all if you don’t want to. 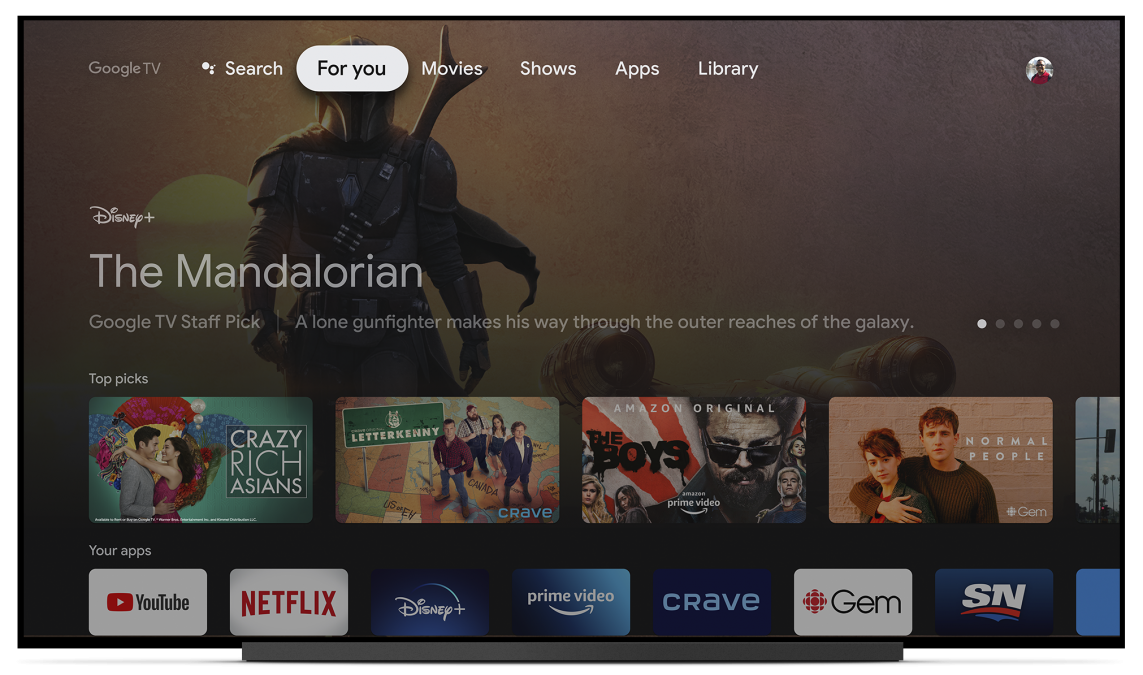 The all-new Google TV UI (which is based on the Android TV OS) is perhaps what’s most interesting here, though, and it’s geared towards “finding and choosing something to watch” from the streaming services you already subscribe to. As such, Google supplies personalised recommendations based on what you’ve watched previously in its “For You” section.

In appearance, the UI looks similar to umpteen other streaming services: a big image sits at the top of the screen with horizontally scrollable carousels offering various categories of content situated below it. You could be looking at Netflix, Disney+ or the Amazon Fire Stick interface – it’s that similar. 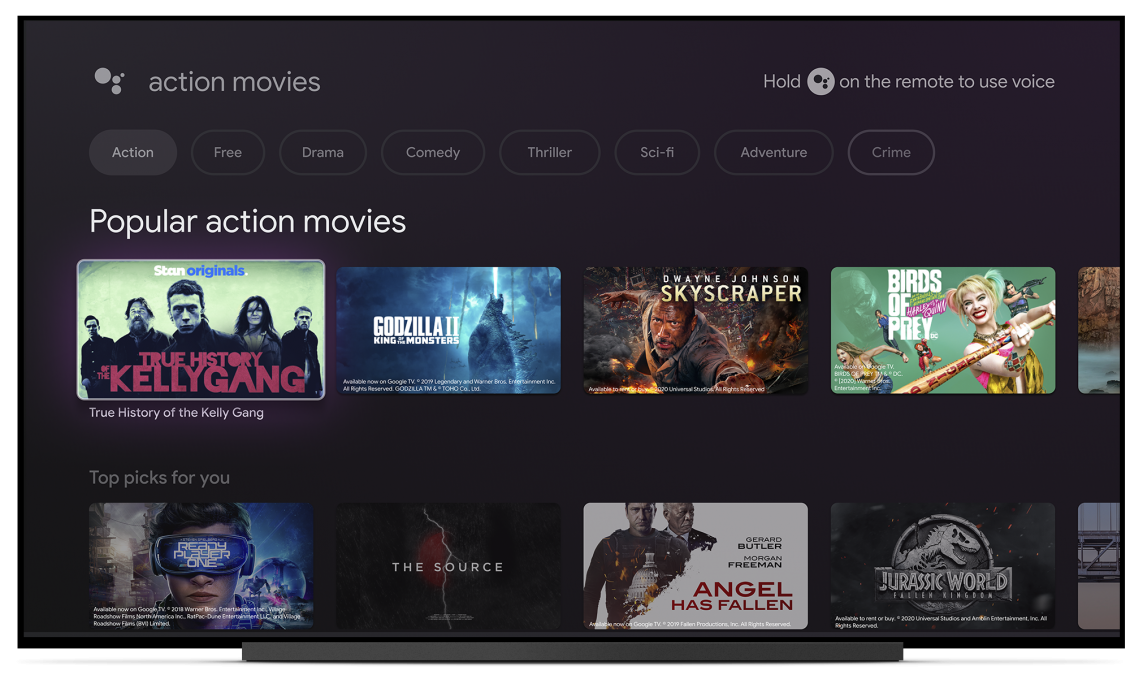 As you’d expect, the new Chromecast focuses on using Google Assistant to allow you to search for the stuff you want, and across multiple sources as well. And it will have access to all the services the regular Chromecast and Chromecast Ultra and Android TV devices have access to. All4 will not be available from launch but support for other services is pretty good and includes most of the core services, including Amazon Prime Video, YouTube, Netflix, Disney+ and My5.

Surprisingly, however, Google won’t be building support for its Stadia games streaming service from the get-go. The company tells us that’s coming in the first half of next year.

The new Chromecast is available to pre-order from 30 September for £60, with shipments delivered from mid-October.

Don't miss a deal at Marks and Spencer
Best offers at Ancestry
Discounts, Sales and Deals at Carphone Warehouse
Save your money with Boohoo
Online-Shopping with Virgin Media
Best products at John Lewis
Latest Posts