Xiaomi-backed Huami is set to bring its Amazfit-Series of smartwatches to India. The company has revealed through its newly emerged social media presence in the country that it is launching the Amazfit Bip and Stratos models in India on July 24. Both smartwatches are compatible with both Android and iOS devices and powered by Bluetooth connectivity. While the Amazfit Bip with a square always-on display was launched in February at $99 (approximately Rs. 6,800), the Amazfit Stratos with a traditional-looking round dial comes at $199.99 (nearly Rs. 13,600).

As suggested through the header image showcased on the official Amazfit India Twitter account, Huami is in development to launch both Amazfit Bip and Amazfit Stratos in the country. The image doesn’t specify the smartwatch models, though it shows the round dial and the square display to highlight the arrival of the two new models. Furthermore, the Chinese company also tweeted a teaser image to put emphasis on its launch plans. “When power, performance, and innovation unite, a revolution takes place. Watch it unveil in India on 24th July,” the company said in the tweet. 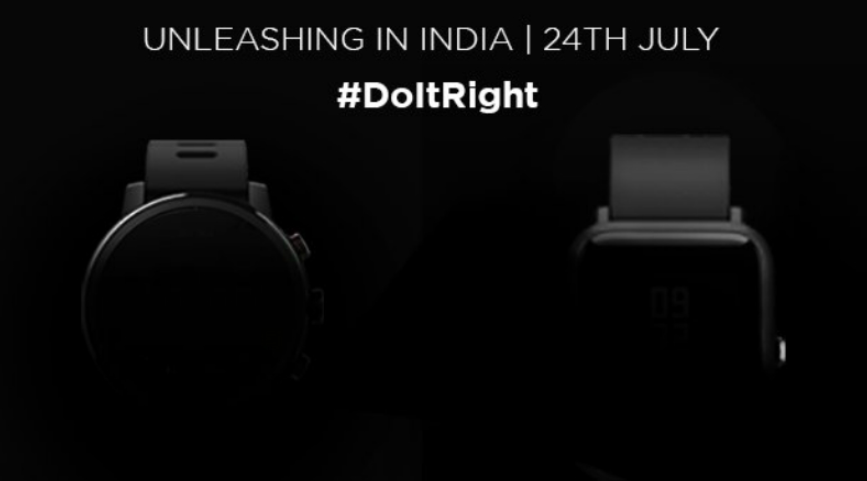 The Amazfit Bip features a 1.28-inch transflective always-on colour display that comes with a 176×176 pixels of resolution and is protected with a 2.5D curved Gorilla Glass 3. The smartwatch has an IP68-certified build that includes PPG heart rate sensor, triaxial acceleration sensor, geomagnetic sensor, barometric pressure sensor, and GPS + GLONASS among other sensors. It also packs a 190mAh battery lithium polymer battery that is touted to offer as much as four months of usage under the watch mode on a single charge. On regular use, the smartwatch is rated to have a battery life of up to 30 days.

Unlike the Amazfit Bip, Amazfit Stratos has a 1.34-inch (320×300 pixels) always-on circular LCD panel with a 2.5D curved Corning Gorilla protection. The smartwatch is powered by a 1.2GHz dual-core SoC, coupled with 512MB of RAM and 4GB of onboard storage. It comes with an array of sensors, including air pressure sensor, ambient light, geomagnetic sensor, gyroscope, optical heart rate sensor (PPG), and tri-axis accelerometer. There is a 5 ATM water-resistant build and a 290mAh lithium polymer battery that is touted to offer up to five days of battery life on a single charge.

Don't miss a deal at Adobe
Best offers at Argos
Discounts, Sales and Deals at Surfdome
Save your money with Ancestry
Online-Shopping with Sky
Best products at House of Fraser
Latest Posts