Vaio SX14 review: A welcome return for the Vaio brand, but sorely overpriced

Five years ago, Sony sold the majority of its Vaio subsidiary to Japan Industrial Partners – and the brand vanished from the market, in the UK at least. Now, the new owner has revived it with two premium laptops. One is the Vaio A12, a slimline laptop-tablet hybrid with a detachable keyboard that takes after the design of the Microsoft Surface Book 2.

The other, which I’m reviewing here, is the more conventional Vaio SX14. Billed by Vaio as a “daily performer”, it’s a very light and attractive laptop with a 4K display and great connectivity. But is it a worthy inheritor of the Vaio name?

Vaio SX14 review: What you need to know

There are a few configurations of the Vaio SX14 out there; the one I tested is the top-end UK model. It has a 14in non-touch IPS display with a native 4K resolution and runs Windows 10 Pro. 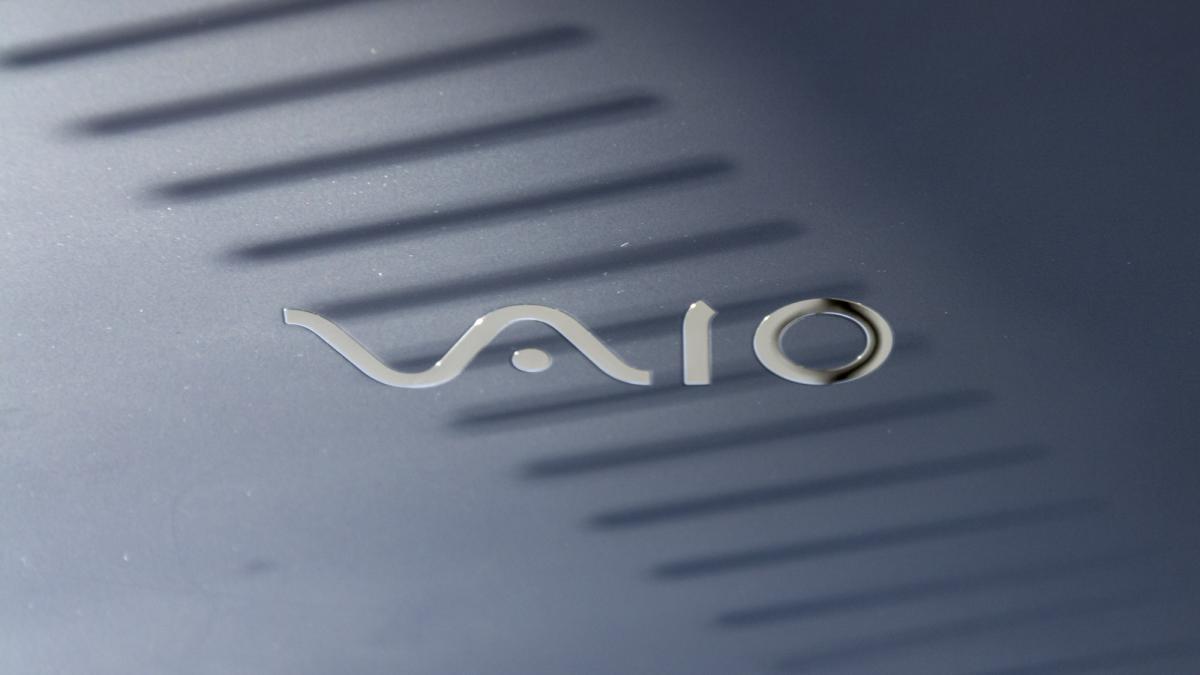 Inside there’s an Intel Core i7-8565U – a familiar chipset in the Expert Reviews labs – backed up by 16GB RAM and a 512GB PCIe SSD. It’s a good spec, but there are plenty of laptops out there right now offering very similar internals for a lot less money.

The UK pricing of the Vaio SX14 feels unreasonable, especially since US shoppers can buy it for considerably less. The model I’m reviewing here costs £2,249, while in the US it goes for a rather more reasonable $1,899 – equivalent to roughly £1,470 before tax. Even the cheapest variant, with a Full HD display, Intel Core i5-8265U processor, 8GB RAM and 256GB SSD costs £1,700 over here. American buyers get access to additional configurations too, including a 1TB NVMe SSD option.

For British consumers, therefore, the SX14 competes with some much cheaper alternatives. The Asus ZenBook 14 UX433FA, which I reviewed at just £999, packs the same Core i7 chipset and comes with the same-sized 512GB PCIe SSD to boot. It has 8GB RAM, which is half as much as the SX14, but that’ll be enough for most people – and it’s not much of a compromise for a saving of £1,250. What’s more, the ZenBook currently holds the title of world’s smallest 14in laptop.

Pricing aside, the Vaio SX14 is an excellent piece of kit. The sturdy, lightweight chassis is a fusion of carbon and aluminium, and the black finish is extremely stylish (the copper brown and silver finishes are nice too, but the black looks the most appealing in my opinion). What’s more, somehow it all weighs only 999g, making it the lightest conventional laptop I’ve encountered. That’s great for people who work on the move, and its trim dimensions (320 x 223 x 18 mm) will slot into any rucksack with ease. 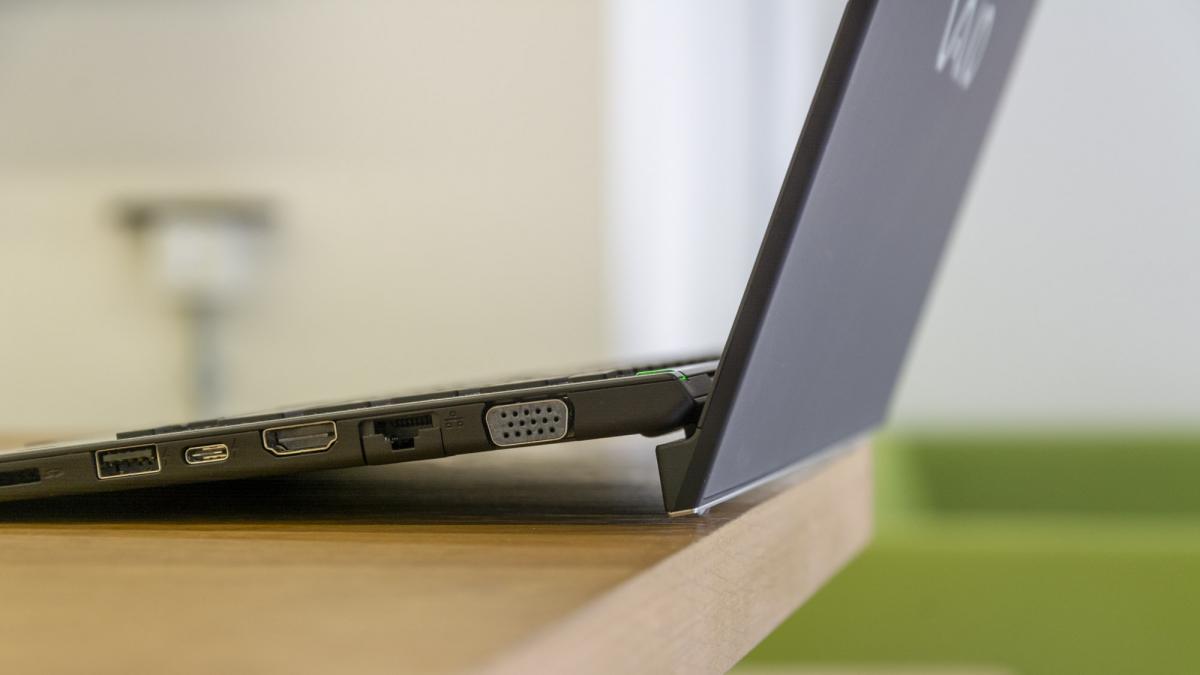 While the SX14 boasts a 90% display-to-bezel ratio, the forehead bezel is bigger than I’d like – larger indeed than the one-megapixel webcam requires. There’s also a rubberised ridge that extends about a millimetre from the top of the bezel, which ensures the screen doesn’t press against the keyboard when the lid is closed. It provides a good bit of protection from grime, but it’s a little unsightly – and the lid itself could do with a tad more reinforcement as it’s too bendy for my liking. 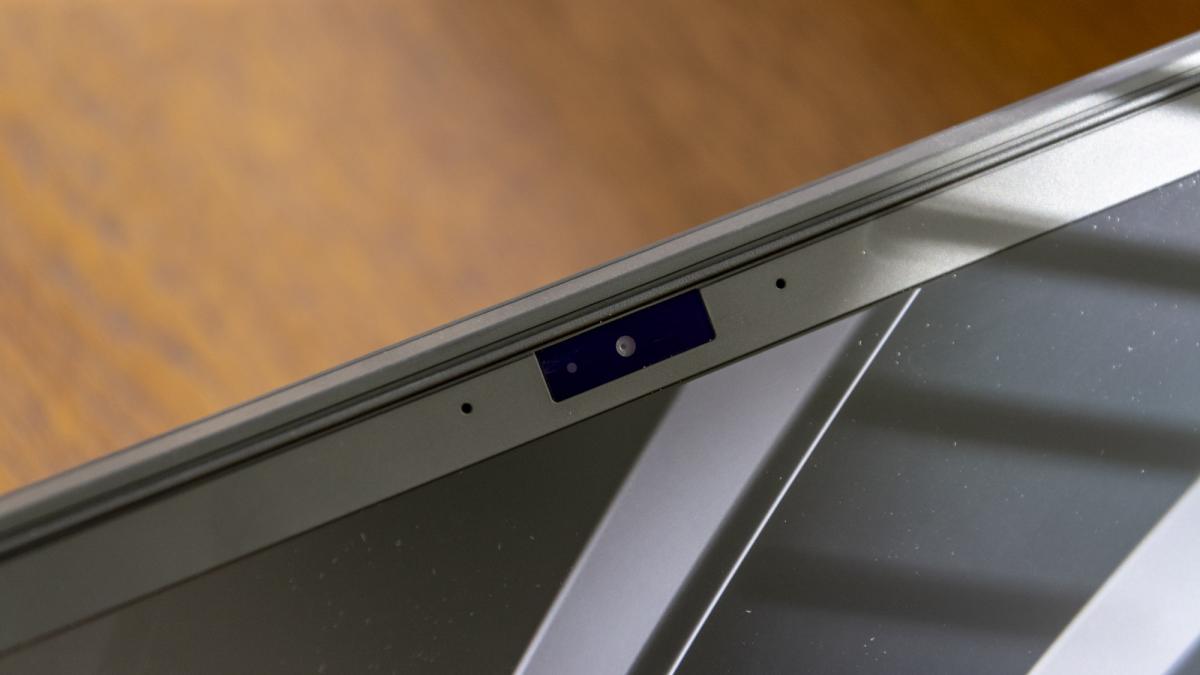 The lid also features a self-raising mechanism that bears a remarkable resemblance to the one found on the latest Asus ZenBooks (such as the ZenBook 14), only more exaggerated. It works very simply: into a curved lip at the base of the lid are moulded two small plastic feet, and these push the back of the keyboard up to quite a steep angle when it’s open. It’s comfortable to type on, and eye-catching too – plus, it helps the base of the laptop breathe and keep cool. 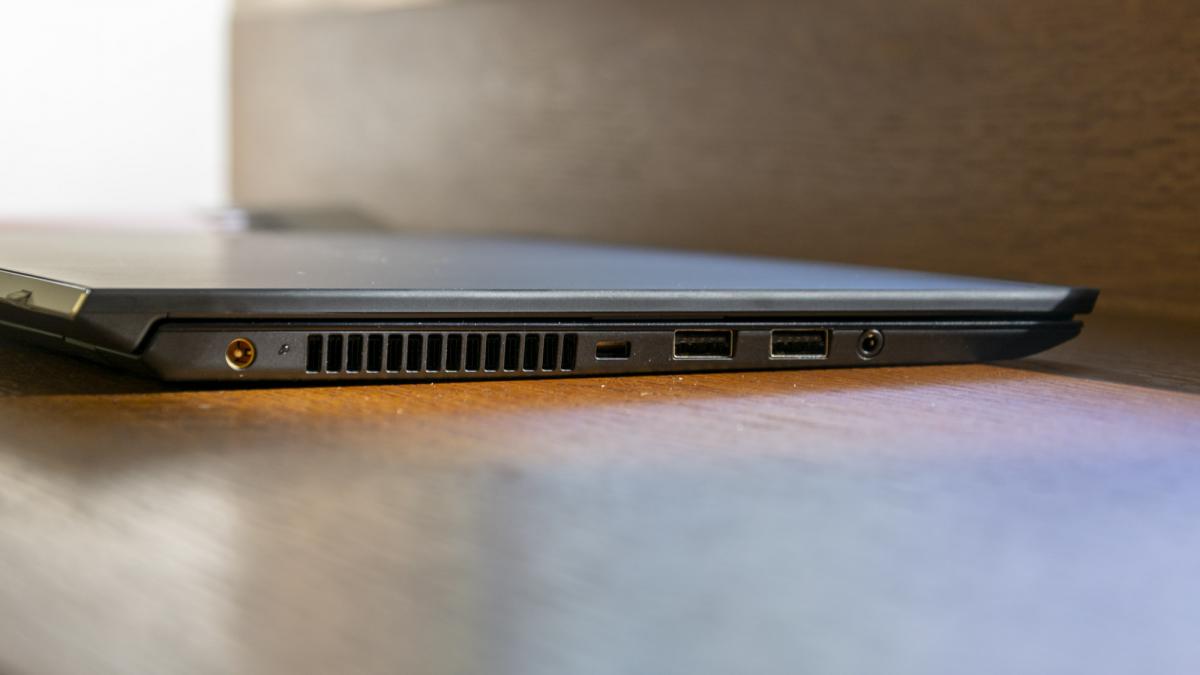 Perhaps the Vaio SX14’s biggest strength is connectivity. On the left edge, there’s a 3.5mm headphone/mic combo jack, two USB 3 Type-A ports and a proprietary power connector; on the right you’ll find an SD card reader, a USB 3.1 Type-A port, a USB 3.1 Type-C port (with DisplayPort), an HDMI input, a fold-out RJ45 Ethernet port and, lastly, a VGA connector. All of this makes the Vaio SX14 supremely practical as a business laptop – much more so than you’d expect from its exceptionally lightweight design. 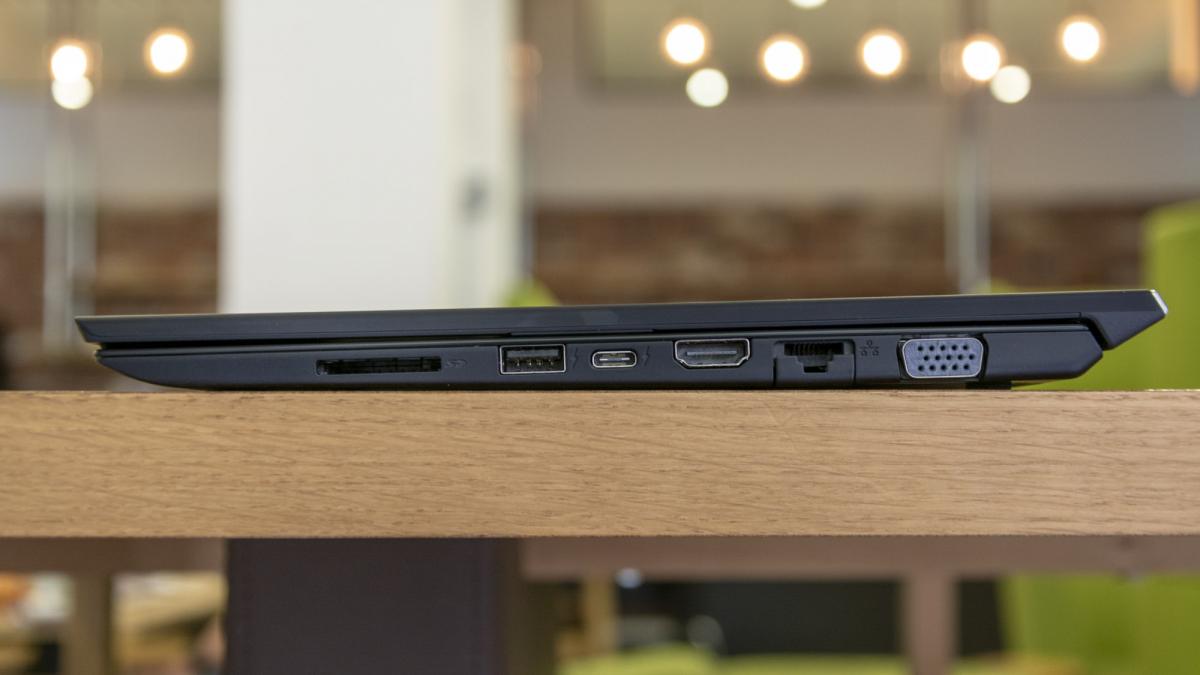 It’s worth noting that the little lightning-bolt symbols beside the USB Type-A and Type-C ports indicate charging capabilities – not Thunderbolt 3. That’s a shame considering the price; Vaio’s explanation is that with so many other connectors and controllers on board, there simply weren’t enough PCI Express lanes available for Thunderbolt and that not many external devices use it anyway. At any rate, the plethora of other ports go a long way towards making up for it.

Before discussing the merits of the keyboard and mouse I must mention what I call “the hum” – or electrovibration, as it’s more commonly known. This is a phenomenon that manifests as a gentle humming or buzzing feeling in your fingers when they touch the base of the laptop while it’s plugged in. It’s not dangerous, but it does point to a grounding issue with the power supply; hopefully it won’t be an issue on production hardware, but I certainly felt it while testing the SX14 and found it somewhat distracting – especially when typing, as you constantly feel the buzzing in the palms of your hands. 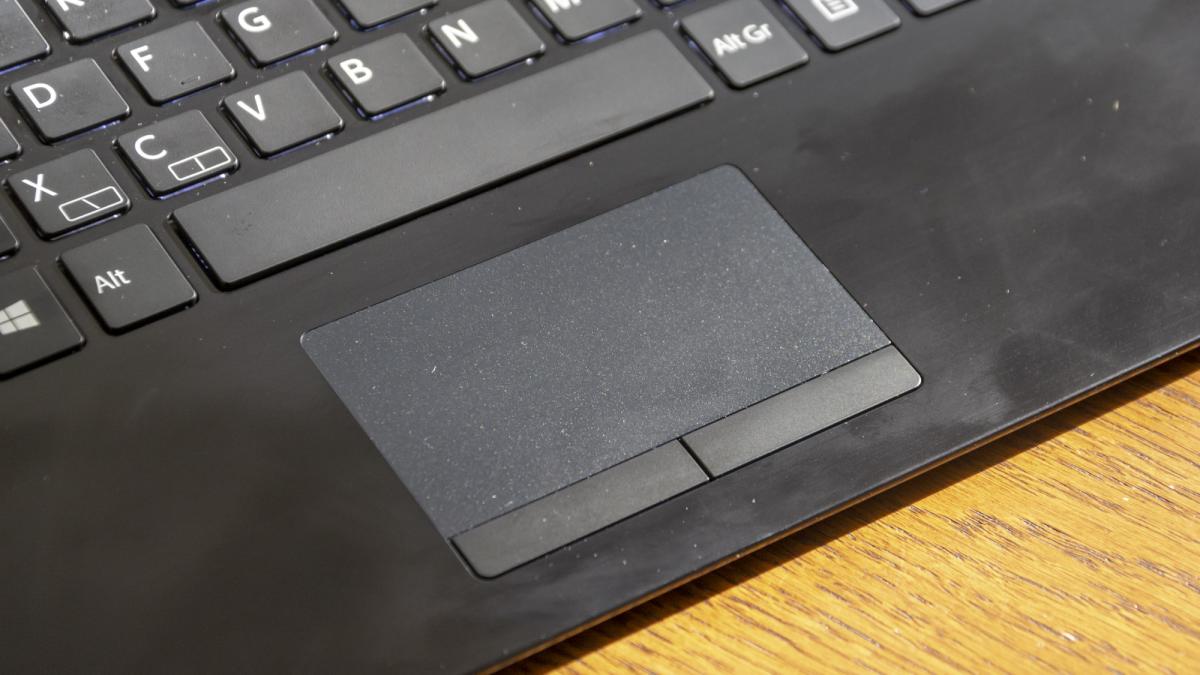 Aside from that, the chiclet-style keyboard is quite ordinary. I do appreciate a healthy amount of key travel in a keyboard, though, and the SX14 didn’t quite meet my standards. The chassis could be sturdier around the keys too, as it depresses a fair way when you push it down. The keyboard backlight at first looks like a nice premium touch, but annoyingly, there’s no way to disable or dim it: it activates whenever you type and fades out after about ten seconds of inactivity.

The touchpad, meanwhile, is perhaps my least favourite part of the SX14, chiefly because it’s about two-thirds of the size I’m used to; as Derek Zoolander might say, “What is this, a touchpad for ants?!” The left and right clickers beneath the touchpad are proportionately smaller as well. Palm-rejection hardly works either, so if you plan to use the Vaio SX14 for long periods of time I’d recommend you turn off the touchpad (using the Fn+ F1 shortcut) and plug in a mouse instead.

The 14in IPS display on the SX14 looks superb, with a native 4K resolution and a fantastically high maximum luminance of 440cd/m2. That’s way brighter than you’ll ever need for indoor use, even under harsh lights – it’ll even serve you happily outdoors in all but the most glaring conditions. A 1,327:1 contrast ratio, meanwhile, means that images are both vibrant and solid, and the panel has excellent viewing angles, with a matte finish that mutes reflections. 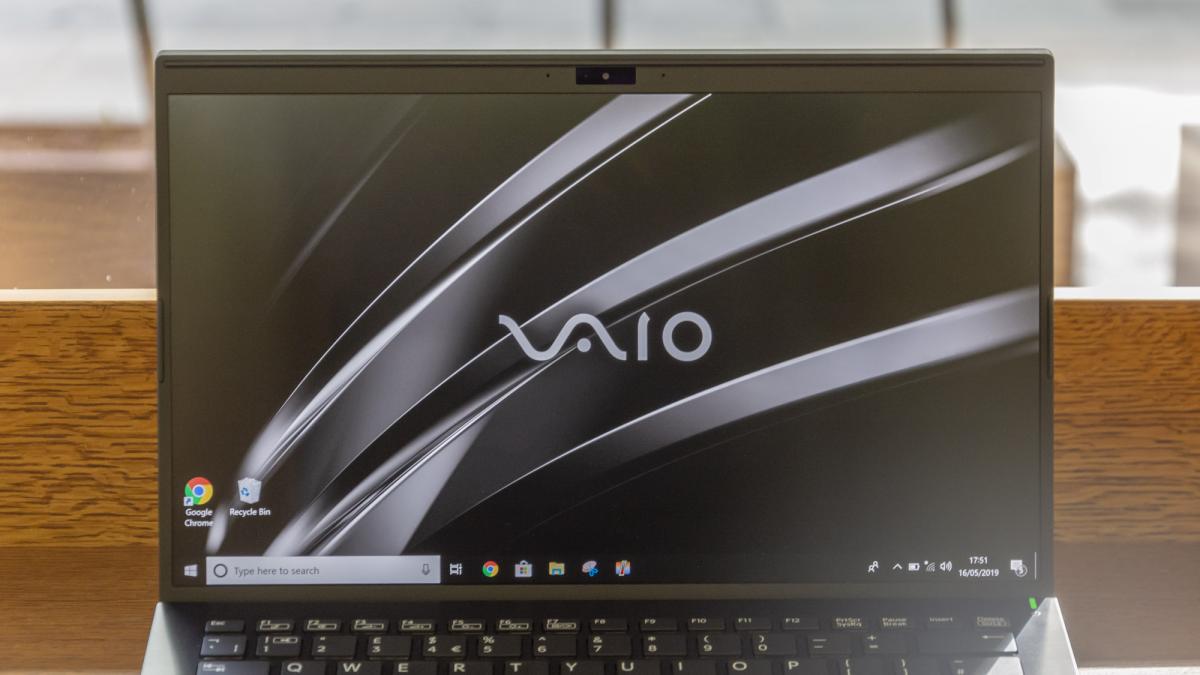 It does a decent job of colour reproduction as well. I measured an sRGB gamut volume of 105% and an sRGB coverage of 93.5%, which means that the colours it produces correspond quite closely to the sRGB range that’s used across all web content and the majority of computer applications. It’s even capable of HDR video streaming, though this doesn’t extend to games and apps. An average Delta E of 2.54 indicates about the degree of colour accuracy I’d expect from a premium laptop – not quite up to professional photo-editing standards, but by no means bad.

We’ve already reviewed several other laptops built around the quad-core Intel Core i7-8565U chipset, so the SX14’s benchmark results were no surprise. It achieved an overall score of 97 in our in-house CPU test, exactly matching the Huawei MateBook 14, which uses the same CPU with 16GB RAM. And as the chart below shows, the Asus ZenBook 14 and Dell XPS 13 with their 8GB RAM setups aren’t far behind. 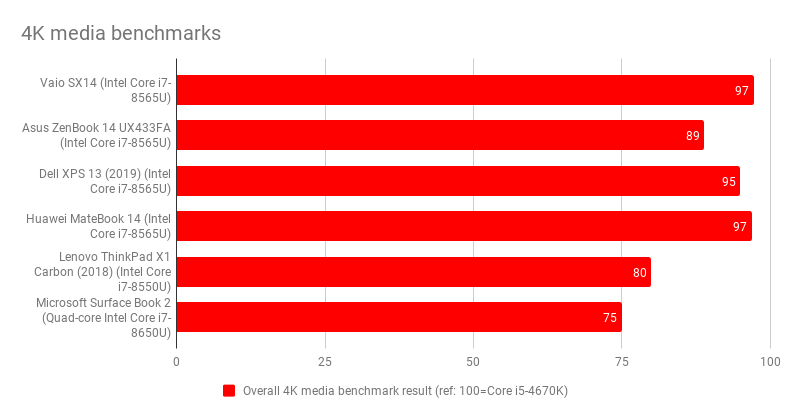 In use, the Vaio SX14 feels nice and quick in everyday tasks, and applications and games open up with great speed. It does, however, pump out a fair bit of hot air from the exhaust grille on the left-hand side when it’s working hard: during the benchmarking process all four cores reached at least 94º Celsius, and one hit 96º – not far off the maximum safe temperature of 100º. However, I didn’t notice any hot spots on the undercarriage or around the keyboard, which tend to be problem areas in laptops with poor heat management. 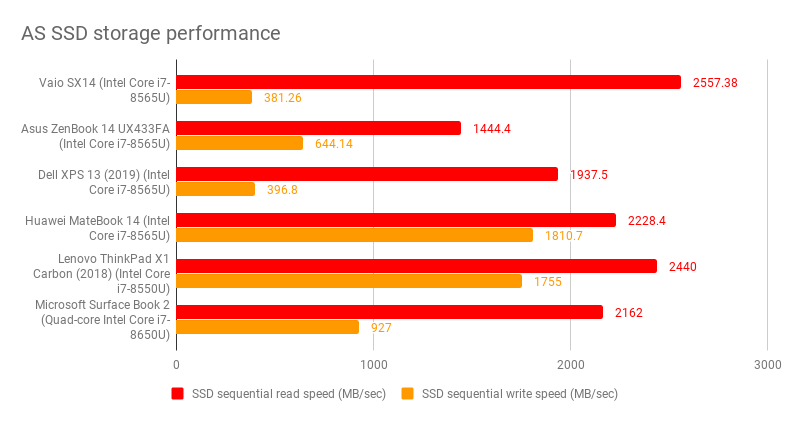 Storage performance is generally good – but uneven. In the AS SSD benchmark, the SX14’s 512GB PCIe SSD read sequential files at an excellent speed of 2,557MB/sec, beating out competitors including the business-oriented ThinkPad X1 Carbon. That’s no doubt part of the reason it feels so quick in use – but sequential writing was far slower, at just 314MB/sec. That’s the worst performance of all the laptops we compared, although only just behind the Dell XPS 13. 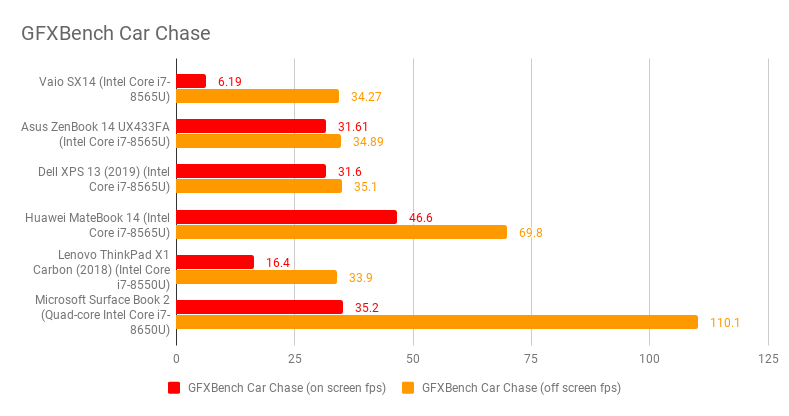 The Vaio SX14 also lagged behind the pack in the GFXBench OpenGL graphics benchmark, managing an average of just 6.2fps in the Car Chase onscreen test. However, the off-screen test completed at a much more persuasive average of 34.3fps, which suggests that the onscreen test might have been affected by a display driver issue. If that’s the case, there’s hope that a future update could improve things significantly. 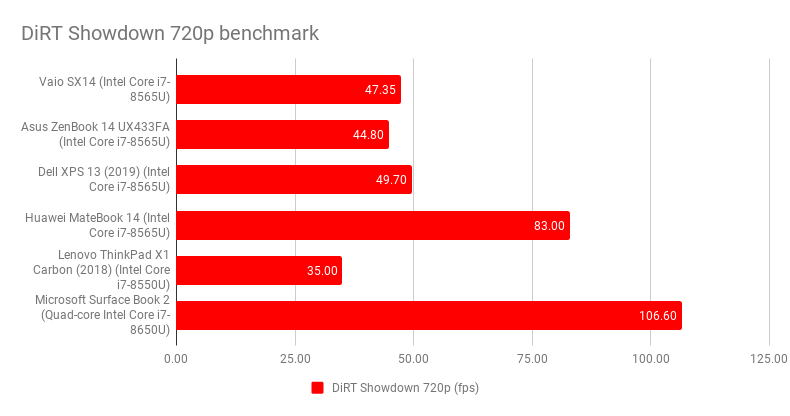 Results in DiRT Showdown were up to par as well, with the Vaio SX14 putting down an average frame rate of 47.4fps in the 720p benchmark – about the same as its rivals. Naturally, though, it can’t keep up with the dedicated GPUs in the Huawei MateBook 14 and Microsoft Surface Book 2. Indeed, for the price, the integrated Intel UHD Graphics 620 GPU is pretty disappointing: if you want a decent frame rate, you have to set the resolution a long way below what that 4K screen is capable of. 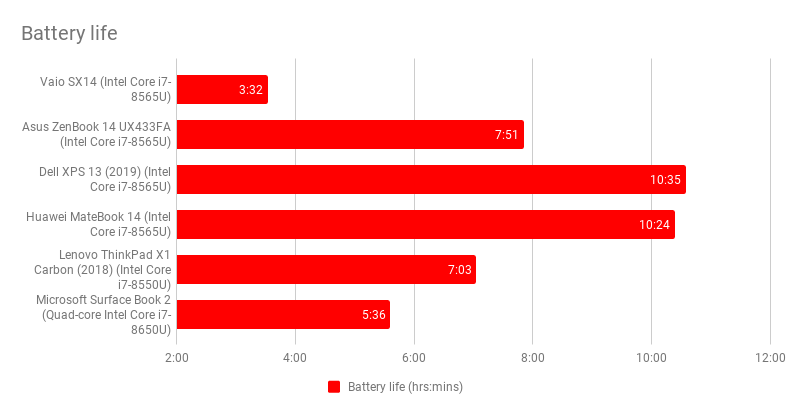 Still, one advantage of integrated graphics is low power consumption – and that’s just as well because here the SX14 needs all the help it can get. Vaio claims that it will see you through the working day without needing a top-up, but we found the 35Wh battery gave us only 3hrs 32mins of continuous video playback from a full charge. That’s very disappointing, especially for a laptop that’s clearly designed for portability: the Dell XPS 13 and Huawei MateBook 14 both lasted around seven hours longer in the same test. FHD variants of the SX14 will probably do better, however, as 4K displays are never great for power efficiency.

Many of us have fond memories of the old Sony Vaio laptop range. The logo was synonymous with stylish design and solid performance, even becoming the tech brand of choice for James Bond. Sadly, the reborn Vaio is a bit of a let-down.

That’s not to say that the SX14 is a bad laptop, not by any means. It’s a sleek, lightweight machine with a fantastic display and great connectivity. Performance is top notch too. 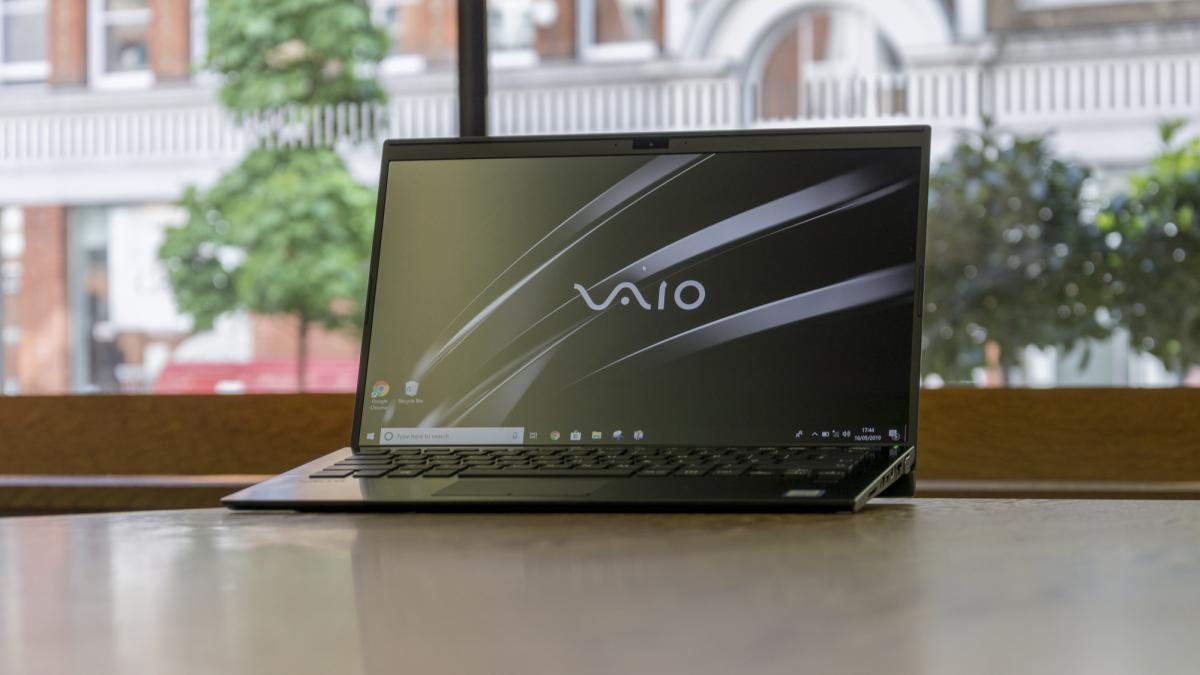 But it certainly has shortcomings, such as the undersized touchpad and woeful battery life. And the biggest problem by far is that price: it’s just not on to ask £2,249 for a laptop with this specification, no matter how nice it may look and feel, when you can pick up the Dell XPS 13 (2019) for £850 less – or choose the Asus ZenBook 14 and save over a grand,

Don't miss a deal at Adobe
Best offers at Groupon
Discounts, Sales and Deals at Ancestry
Save your money with Myprotein
Online-Shopping with Surfdome
Best products at H&R Block
Latest Posts