TCL Alto 7+ soundbar review: You’ll get more than you paid for, but less than you might wish for

If you’re buying (or have bought) one of the supremely cheap 4K TVs on the market these days, the TCL Alto 7+ soundbar is the audio partner that TV needs. This 2.1-channel powered speaker system will pump up the sonic pleasures of watching movies and playing video games, and it’s not bad for casual music listening sessions, either. With a street price at press time of just $130, it’s a stupendous value for anyone willing to make some sonic compromises in the name of staying within budget.

TCL would be happy as a dog with two tails if you paired the Alto 7+ with one of its inexpensive 6-series quantum-dot smart TVs, but you should be able to connect any TV to this soundbar’s one and only HDMI ARC (audio return channel) port. The speaker clicks on automatically when it senses an incoming signal from the telly, though you might need to use the soundbar’s minimalist remote for volume control if that TV is an older model (like my six-year-old 55-inch Panasonic plasma). And if your TV (or A/V receiver, as the case may be) predates HDMI, the Alto 7+ has optical digital and 3.5mm analog inputs, too.

TCL provides all the cables you might need, including one for infrared pass-through in case the 36-inch-wide by 2.5-inch-high speaker cabinet blocks the IR receiver on your TV. An infrared emitter at one end of the cable relays the signals that the speaker’s own IR receiver picks up from your remote—even when the soundbar itself is in standby mode. Also in the box: Screws for hanging this thing on the wall, using the keyhole slots molded into the back plastic of the enclosure. (A paper template for hole placement would have been nice to include, too, but is hardly essential.) 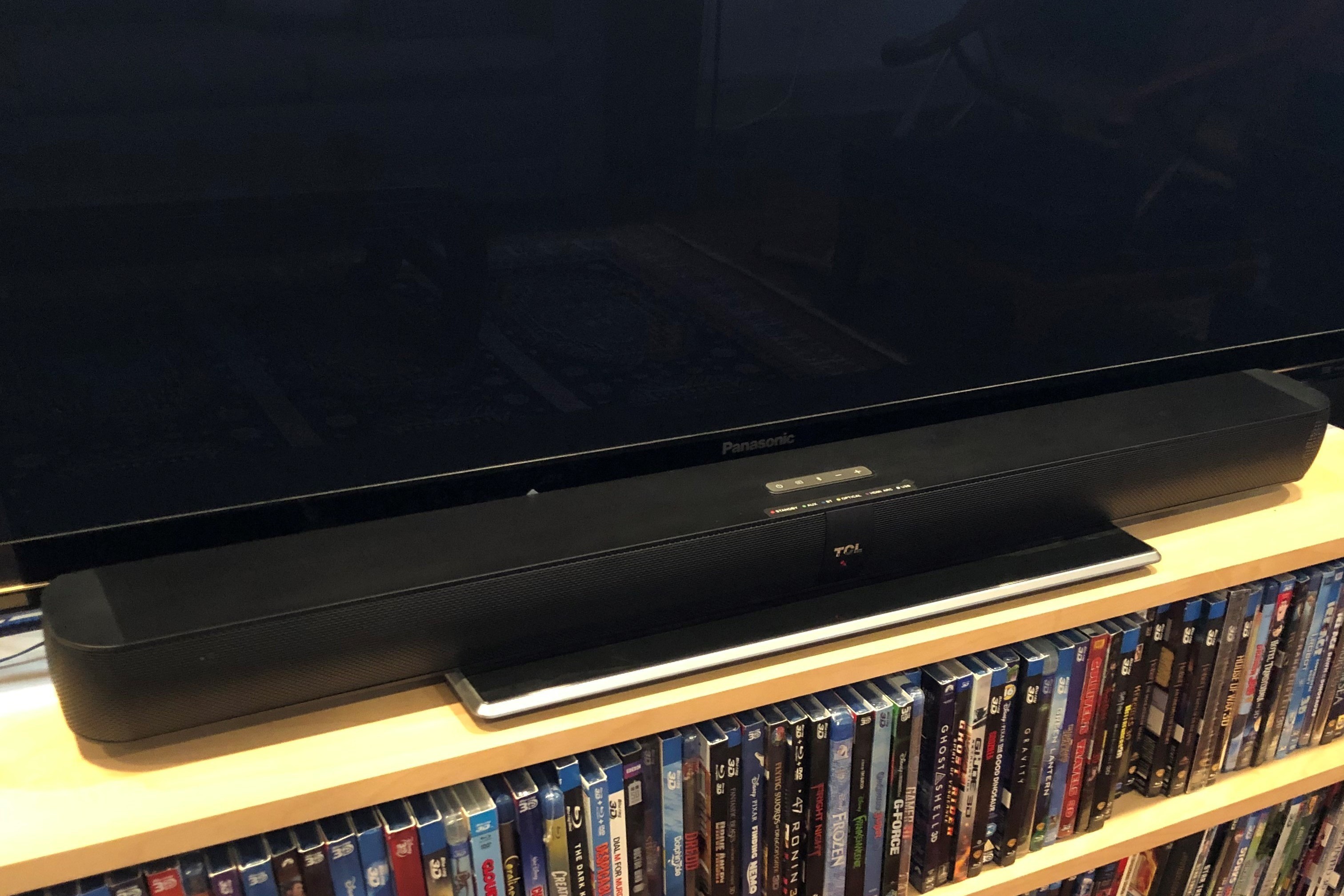 There are dual 1.5-inch tweeters and two 4.5-inch midrange drivers in the soundbar itself. The companion wireless subwoofer, which measures 12.9 x 8.3 x 9.8 inches (HxWxD), houses a 6-inch polypropylene woofer and an oval bass reflex port. If you have curious toddlers at home, be aware that there is no grill protecting the subwoofer’s active driver, although that situation is somewhat ameliorated by the fact that it’s a rear-facing driver.

In theory, the three EQ buttons on the remote—Movie, Music, and News—should cover the bases. In practice, not so much. I found it best to leave the EQ on the Movie setting for everything, as that mode delivers the warmest, fullest sound, with just as much clarity and even more bass response than I heard on the Music setting. I had no problem breaking through the London fog and accents of The Crown, Season 3 on Netflix—even when lush orchestral scoring swept through the palace, lending a posh impression. 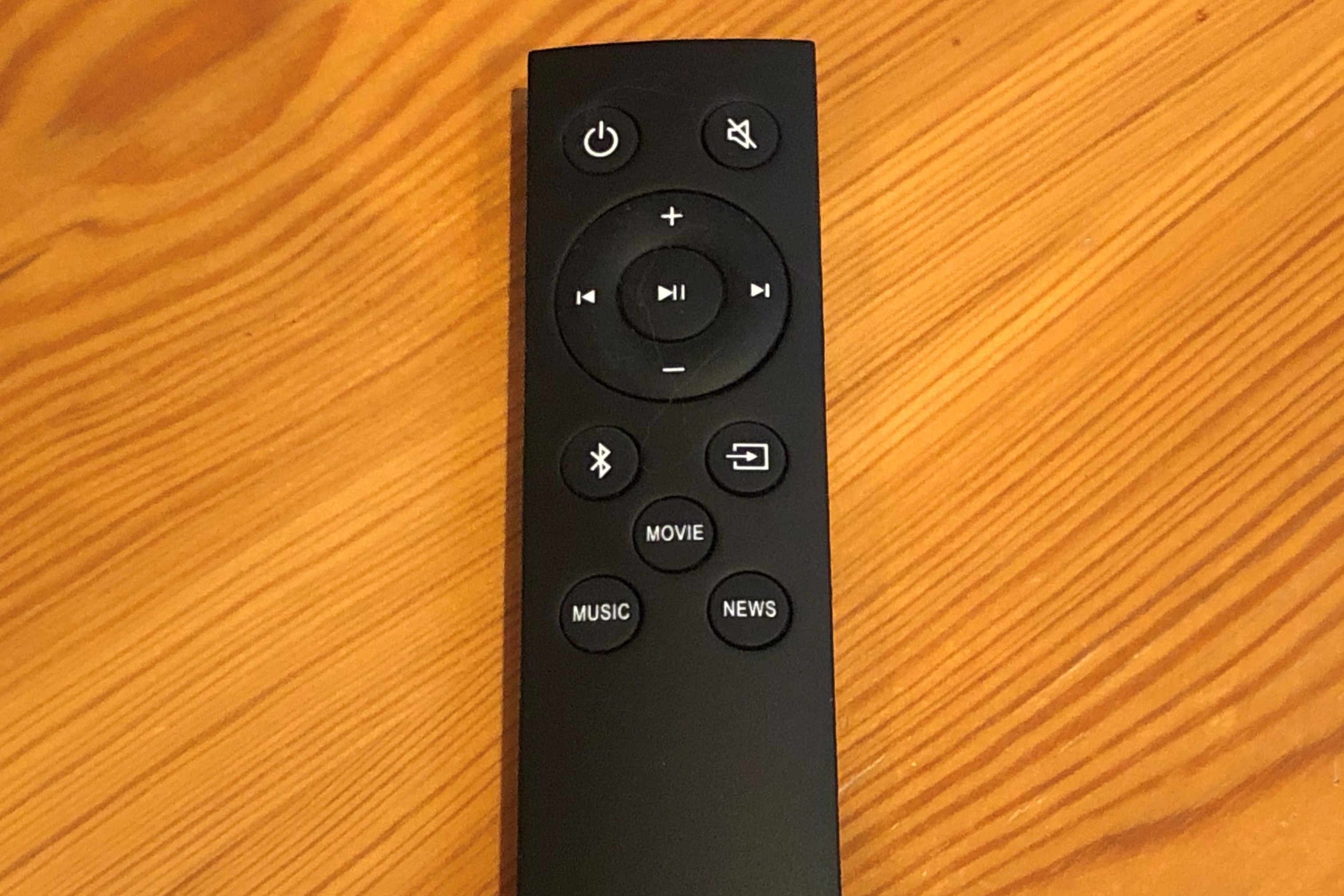 When the band actually deigned to play (rather than talk and gawk), The Rolling Stones’ 2016 tour doc Olé Olé Olé!: A Trip Across Latin America offered plenty of cranked up “Satisfaction.” And I made a great stopover at Showtime, revisiting John Singleton’s Poetic Justice, that Tupac Shakur/Janet Jackson romance flavored with all manner of solid urban music: Classic R&B to hip-hop playing in the background.

As for the third EQ option, which really should be labeled “Talk,” the so-called News setting pushes voices forward in an odd, blunt fashion that suppresses virtually everything else on the soundtrack. It’s also worth noting that there is no “off” or “flat” setting for the EQ. 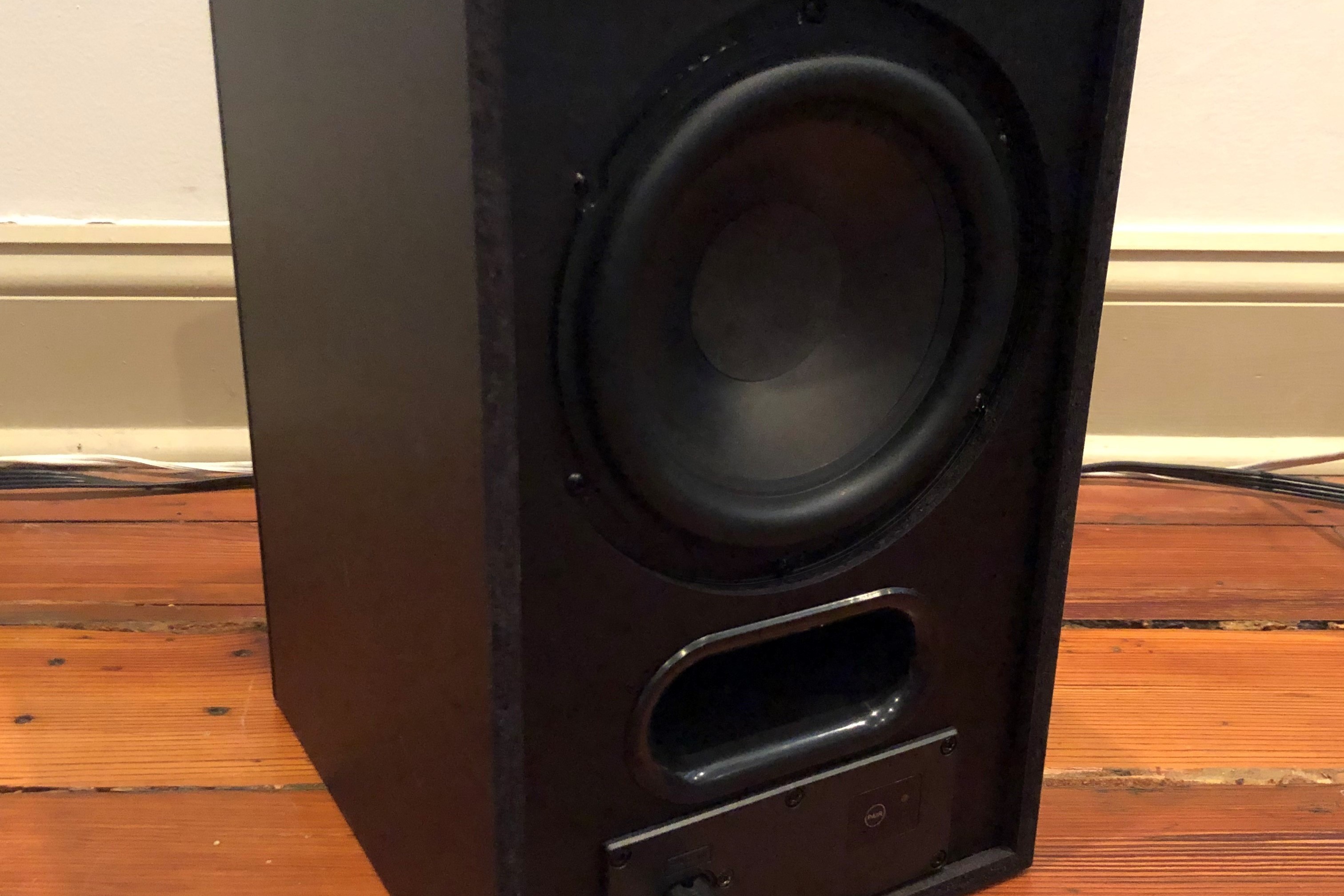 Looking to adjust the companion subwoofer’s medium-strong bass pumping? Fuhgeddaboudit. I couldn’t even adjust the sub’s volume separately. Your only “tuning” options are to move the box closer or farther from a corner or backing wall.

The Alto 7+ likewise lacks accommodations for optional rear speakers and overhead drivers for Dolby Atmos soundtracks. Nor is there sophisticated, phantom-surround DTS-Virtual X processing that works black magic in the much pricier—but clearly superior—Yamaha YAS-209. But not all is lost atmospherically with the multichannel mixdowns deployed in the TCL soundbar via plain vanilla Dolby Digital processing. During the family picnic scene of Poetic Justice, I could swear I heard crickets chirping and kids cavorting several feet out to the left and right of the soundbar. 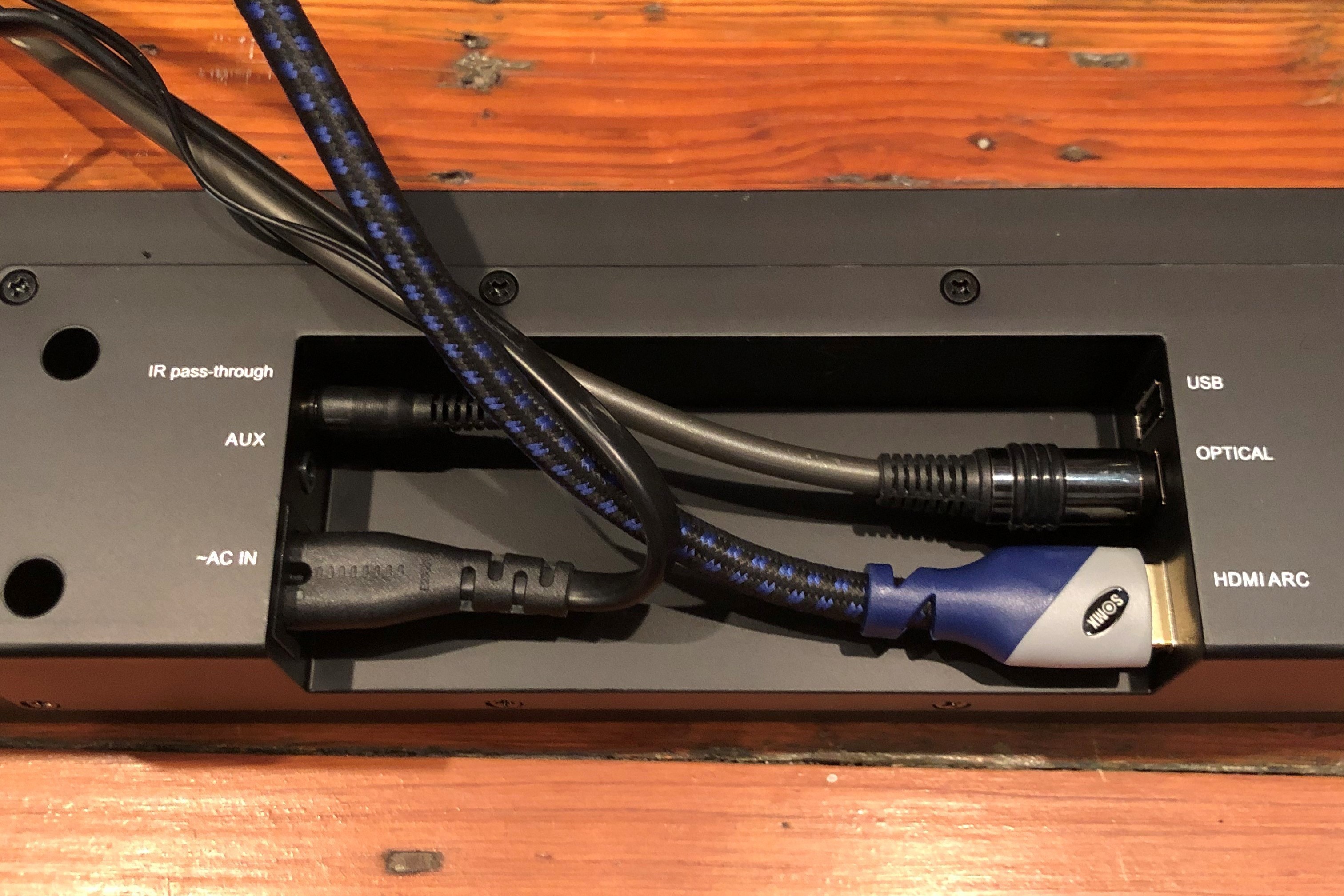 While a pleasing, “I could live well with this soundbar” feeling lingers on with TV and movie content, the Alto 7+ starts to wear out its welcome as a pure music player. There’s no Wi-Fi receiver on-board, so no direct streaming of internet content is possible. Chromecast isn’t supported, either. And the Bluetooth connectivity that is provided has a primitive, compressed air about it. Streaming the newly remastered (and extras-rich) celebration of Prince’s 1999 on my iPhone X, the title track sounded more like 1955 jukebox rock. “Little Red Corvette,” meanwhile, could barely hit 60 MPH. The skin-tingling polyphonic synthesizer buzz that should be driving this vehicle just wasn’t there.

Shifting gears, Roger Daltrey’s vocals seemed reasonably robust, but Pete Townshend’s guitar work was a smudged mess on the duo’s first new album in ages, simply called Who—and you know it didn’t go down like that in the studio. Modifying the internal music EQ on my mobile phone hardly helped matters: Jazz and Late Nite settings just proved the least of the evils. Frankly, I was less annoyed when listening to Bluetooth-delivered music I didn’t know at all. 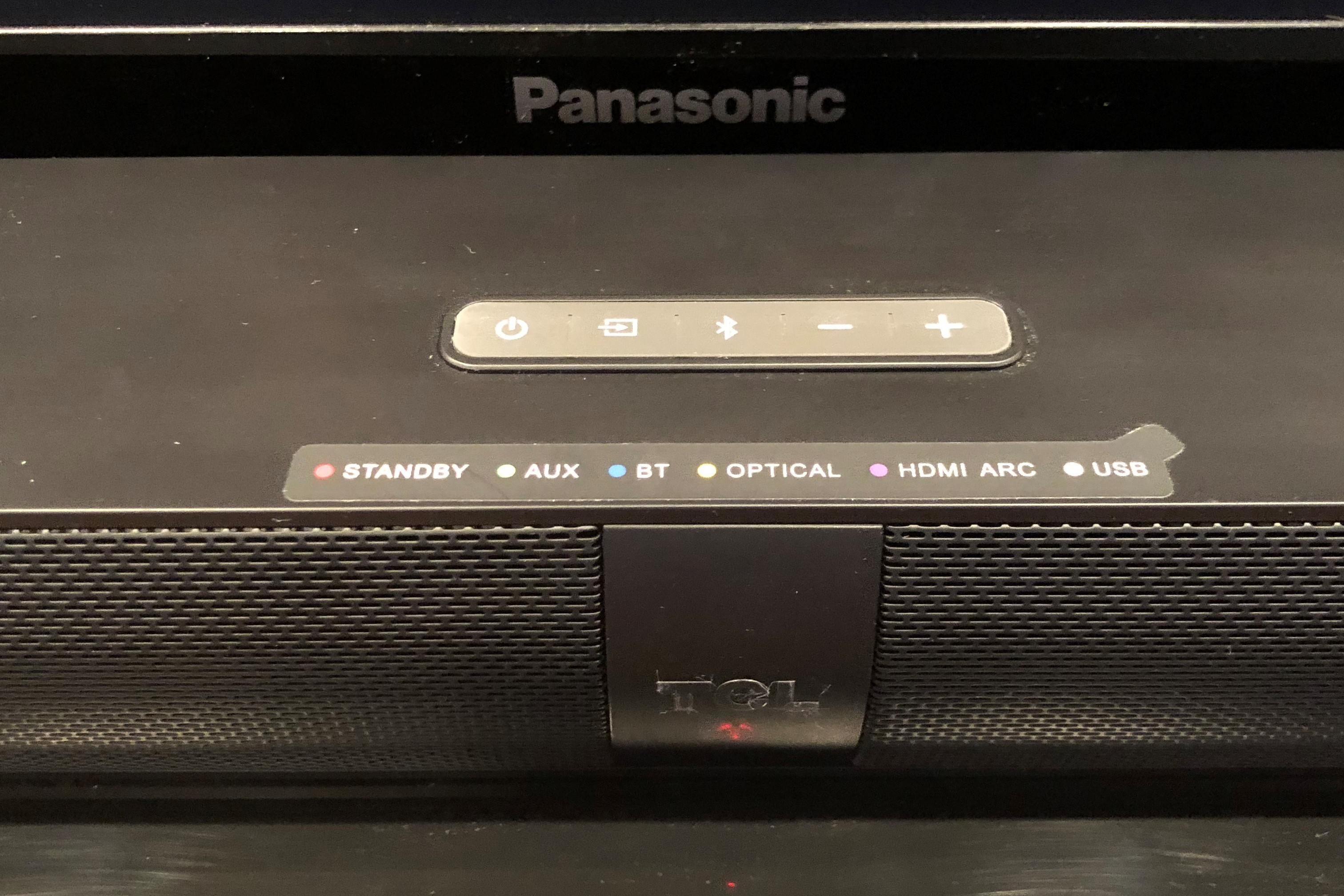 Things did improve some (but not enough) with disc-based material played via an optical cable connected to a Yamaha Blu-Ray player. The new Jimi Hendrix and Grateful Dead box sets—Songs for Groovy Children and Giants Stadium, 1989, 189, 1991 respectively—had a fair sense of life about them, though hardly the pinpoint articulation and airiness I’ve enjoyed with better earphones and speaker rigs.

Bang for the buck

Don’t ask TCL’s Alto 7+ to play outside its comfort zone and you’ll be pleased to have it around. It’s especially telling when you power down this soundbar and suffer the consequences of an inexpensive TV’s internal speakers. Geez, even the picture seems to shrink!

TCL’s super-affordable Alto 7+ soundbar is easy on the ears and wallet and slugs well above its weight zone with movie and TV soundtracks. It’s much less capable delivering just music.

Don't miss a deal at O2 Mobile
Best offers at Marks and Spencer
Discounts, Sales and Deals at Vodafone UK
Save your money with Nike DE
Online-Shopping with Newegg
Best products at H&R Block
Latest Posts