First the good news: Unlike the new SmartThings Smart Bulb (which was announced at the same time as this plug earlier this year), the Samsung SmartThings Wifi Smart Plug does not require the SmartThings Hub in order to work. That’s a little confusing since SmartThings is in the name of the product, but the tip-off is actually the inclusion of the word “Wifi.” (The SmartThings hub is a bridge for smart home devices based on Z-Wave and Zigbee technologies.)

Now the bad news: The plug just didn’t work all that well in my testing, making it a distant also-ran in a busy category filled with better options.

The hardware at least looks good. It’s a compact, rectangular, single-outlet design that neither extends much beyond the width of a standard outlet nor blocks the adjacent socket. That means you can use this plug in either the top or bottom outlet without interfering with the other one, a welcome touch. Manual operation can be achieved via pressing a small power button on the left side of the device. A green LED on the face of the plug indicates whether the unit is on or off. 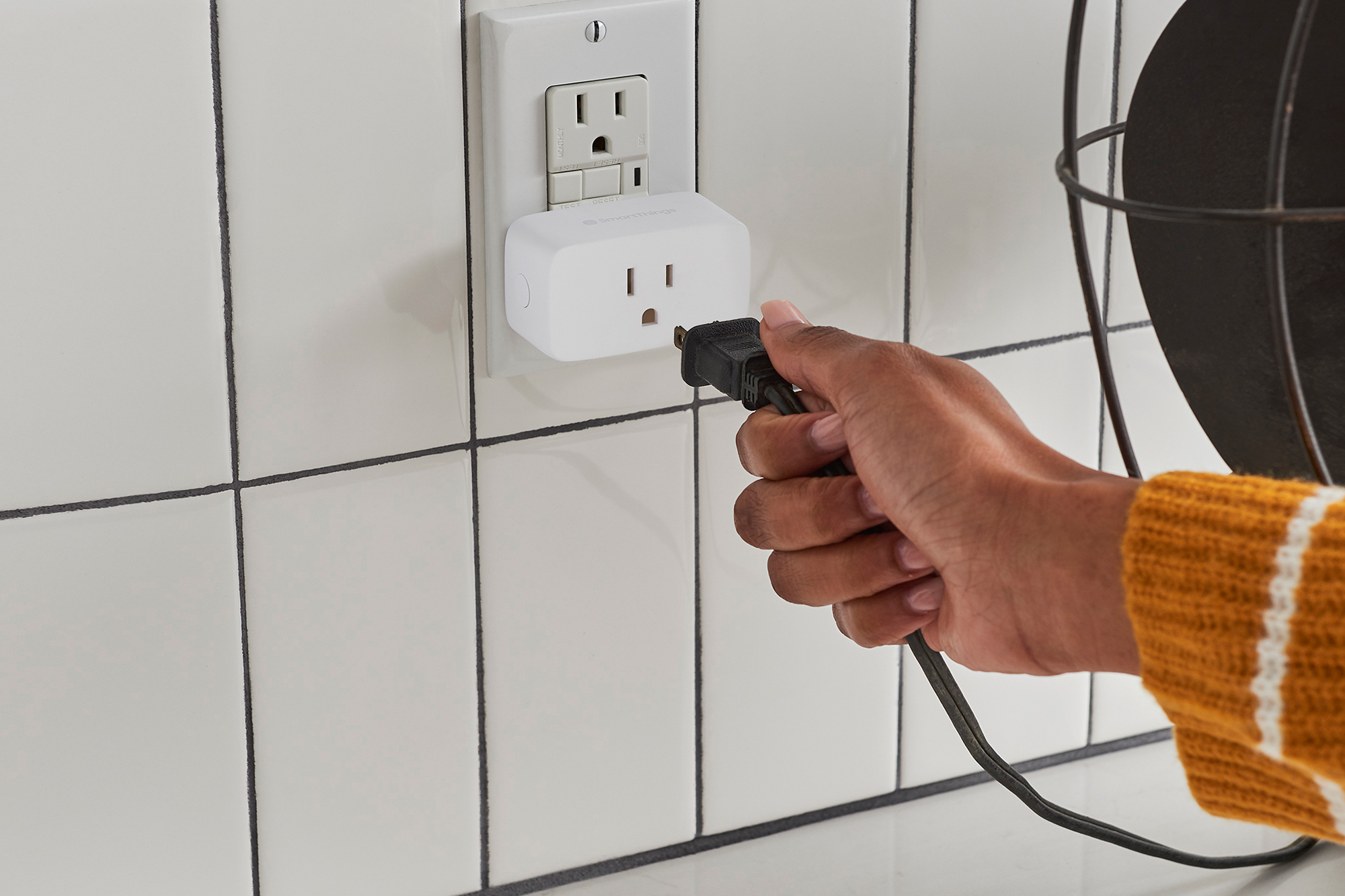 While you don’t need the SmartThings Hub to use the Wifi Smart Plug, you do need the SmartThings app. Setup requires scanning a QR code, which is printed on the reverse of the device as well as provided in a sheet of stickers, and then connecting to the plug’s temporary network, and finally stepping through the usual steps of tethering the plug to your home network.

I had significant trouble with much of this, beginning with my phone’s failure to find the plug’s temporary Wi-Fi network at all. A hard reset of the plug (by holding down the power button for a few seconds) ultimately got things going. After that, the pairing process is slow and overly convoluted—a password is even required to connect to the temporary network—and just as I thought I was finally done, trouble struck a second time. The unit refused to connect to my home network, insisting it was running at 5GHz. 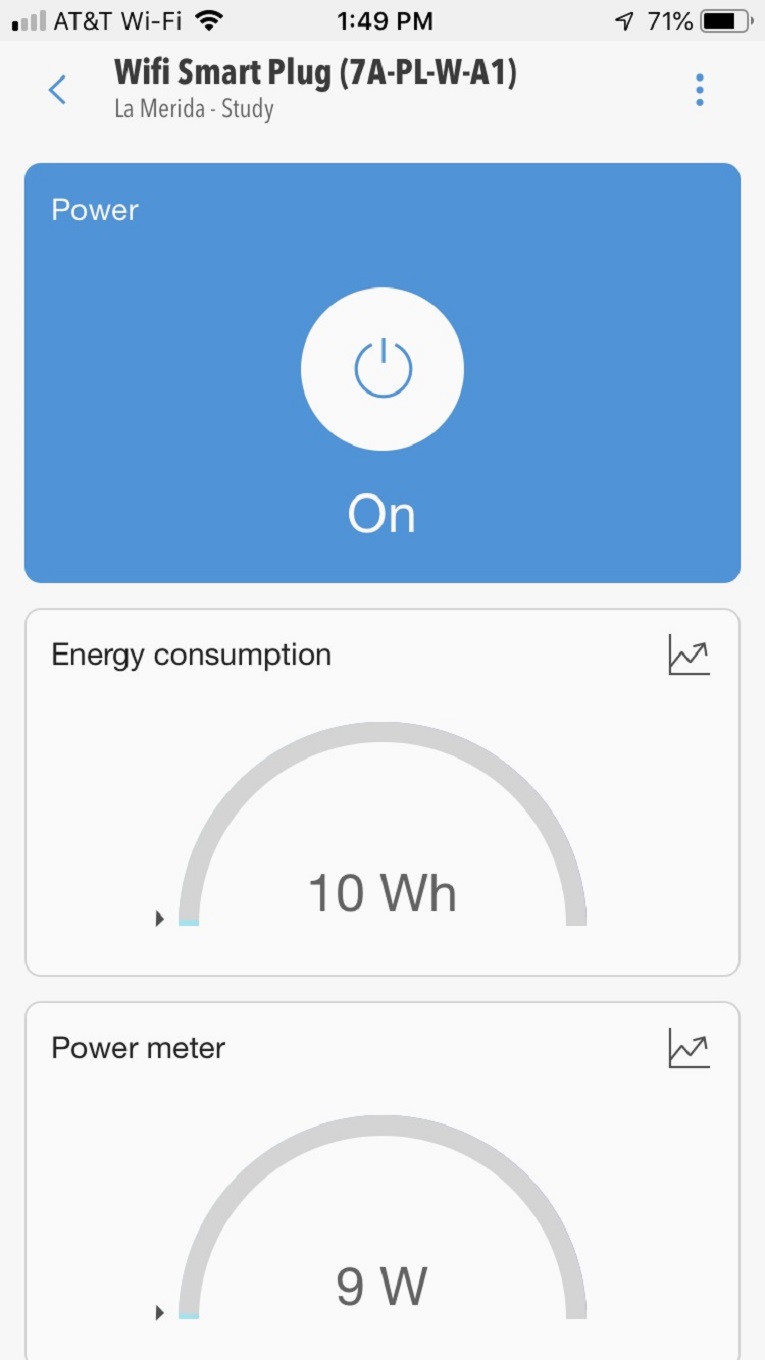 My Xfinity mesh network actually operates networks on both frequencies using the same SSID, and it occasionally causes trouble like this, but I was able to work around the problem by manually entering the network name, password, and wireless security type into the app’s user interface, after which everything connected normally. All told, I spent at least twice as long connecting to this plug than I did competing models. That would be a significant issue if you were trying to outfit your entire house with Samsung’s.

Within the app, managing the plug is largely as expected, with “on” and “off” your primary options. There are two convenient extras within the app in the form of a power meter (showing real-time power draw) and an energy consumption meter (which shows power used over time). These are helpful looks at real-time usage, but every time I clicked through to the historical graphs they were completely blank. Similarly, beneath these readouts is a box marked “Activity history,” but this was invariably blank too, save for a caption reading “No activity.” Presumably, history recording is simply not supported on this device. It’s also worth noting that the power meter doesn’t always reliably update in real time, often requiring you exit to the SmartThings home screen, then re-entering the plug management system to get a new readout.

I’ve noted my trouble getting multi-device automations to work in the SmartThings Smart Bulb review, but, as with the bulb, I didn’t have any issue with standard time-based scheduling on this device. As well, an Alexa connection worked fine for voice control. (Google Assistant and Bixby are also supported.)

At a mere $18, the SmartThings Smart Plug is a fairly low-priced option in this market. If it weren’t so maddeningly buggy, particularly during setup, it could have been a worthwhile product to consider, but as it stands, you’ll find plenty of more capable alternatives available.

Samsung’s SmartThings Wi-Fi plug doesn’t need its eponymous hub to operate, but it’s simply too riddled with bugs to recommend.