Google falls even further behind Amazon in the smart speaker race

Smart speaker sales are booming. In the second quarter of this year, 26.1 million were sold globally – over 55% more speakers than were sold during the first three months of 2019, and there is a standout winner: Amazon.

According to research from technology analyst firm, Canalys, Amazon is leading the way, having shipped 6.6 million units of its Echo smart speakers worldwide in Q2. This is up from 4.1 million during the same period in 2018 and means Jeff Bezo’s firm now holds 25.4% of the market – a growth of 61% in 12 months.

Google, on the other hand, has slipped into third behind Chinese brand Baidu. In Q2 2018, Google owned a third of the global market and sold more than 5 million of its Google Home speakers. Just a year later, this figure has dropped to 4.3 million and its market share has halved to 16%.

Baidu has seen the greatest year-on-year growth, however, jumping a staggering 3700%; shipping 4.5 million smart speakers in three months and snatching 17% of the market share. This huge growth is, in part, due to the fact Baidu only entered the smart speaker market in December 2017 when it launched the Baidu Raven H speaker, 10 months after acquiring the Raven Tech company. In Q2 2018, only 0.1 million of these Baidu Ravens had been sold. Since then, a strong marketing campaign has seen sales soar. 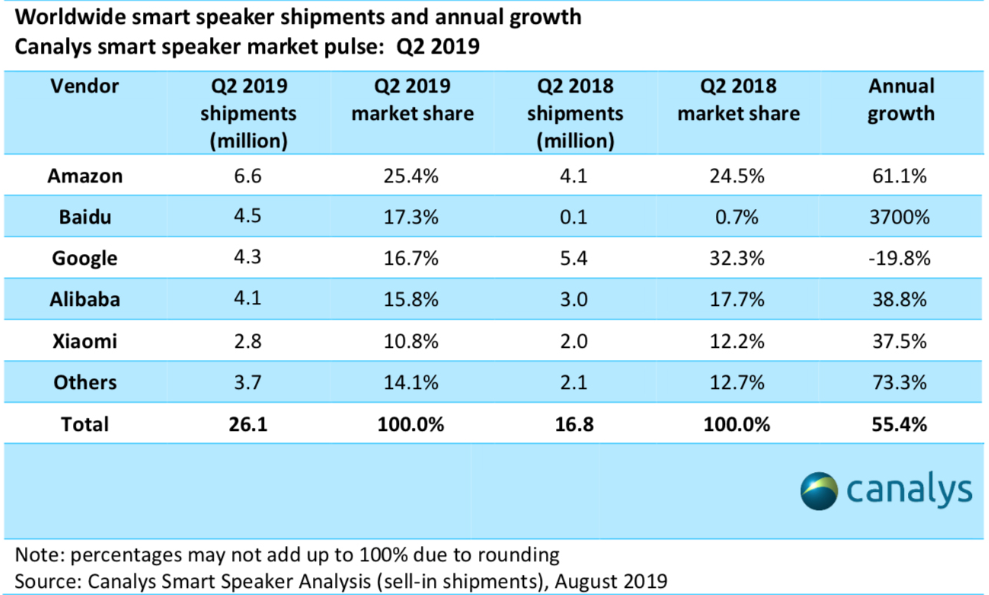 We can also likely attribute a large part of Amazon’s quarterly growth, as well as the growth of smart speakers generally, to Prime Day in July. Although Amazon hasn’t revealed exact sales figures, it said after the event that this year’s sale “was the biggest event ever on Amazon for Alexa devices with screens, such as Echo Show and Echo Show 5,” and members worldwide purchased more than 175 million items across the entire site.

It should be noted that Baidu and Google operate in entirely exclusive markets, so one can’t steal sales from the other as such, but as a general trend, the Chinese smart speaker market (which also includes shipments from Xiaomi and Alibaba) was twice the size of the US market.

In fact, the US market showed slight weakness, dropping 2.4% with a total of 6.1 million units shipped. “Amazon and Google are focused on growing their business outside the US,” said Canalys Senior Analyst Jason Low. “Google’s transition to the Nest branding while pivoting to smart displays proved to be a challenge, especially as it has begun rolling out its Nest Hub smart display globally. Google urgently requires a revamped non-display smart speaker portfolio to rekindle consumer interest, as well as a robust marketing strategy to build its Nest branding outside of the US.”

In 2018, only a third (32%) of Amazon smart speakers were sold outside of the US. This year, this figure is 50/50. Google has similarly increased sales outside of its home region, with 45% of its smart speakers being bought beyond the US compared to 58% last year.

It will be interesting to see if the market continues to grow through Q3 and into Q4 with Black Friday and the Christmas sales period approaching.

Don't miss a deal at Surfdome
Best offers at Newegg
Discounts, Sales and Deals at Virgin Media
Save your money with Sephora
Online-Shopping with John Lewis
Best products at Microsoft Store
Latest Posts