How much is that Doogee in the window? Cheap, but not cheap enough

You probably haven’t heard of Doogee before. In fact, most people haven’t, but all you really need to know is that the company is one of the smaller Chinese phone manufacturers, pushing out even cheaper handsets than the usual fare from the east.

In particular, the Doogee S40 is a rugged phone, designed for protection from the elements and to be impervious to bumps and drops. Is that overkill for a £100 smartphone? Let’s find out.

Doogee S40 review: What you need to know

It’s pretty normal to be paranoid about damaging your £500+ smartphone, but does one this cheap really need the same kind of assurances? I suppose if you value your data, and are on a tight budget then there’s possibly room for justification.

In any case, Doogee sees a gap in the market, and as such claims that the S40 has endured the extreme testing required for military-grade MIL-STD-810G certification. This means that the phone has been dropped from a height of 1.21m a total of 26 times, been exposed to temperatures ranging from -25°C and 55°C for hours at a time, and vibrated at 10-500Hz for two hours. Despite all this, the Doogee S40 has lived to tell the tale. 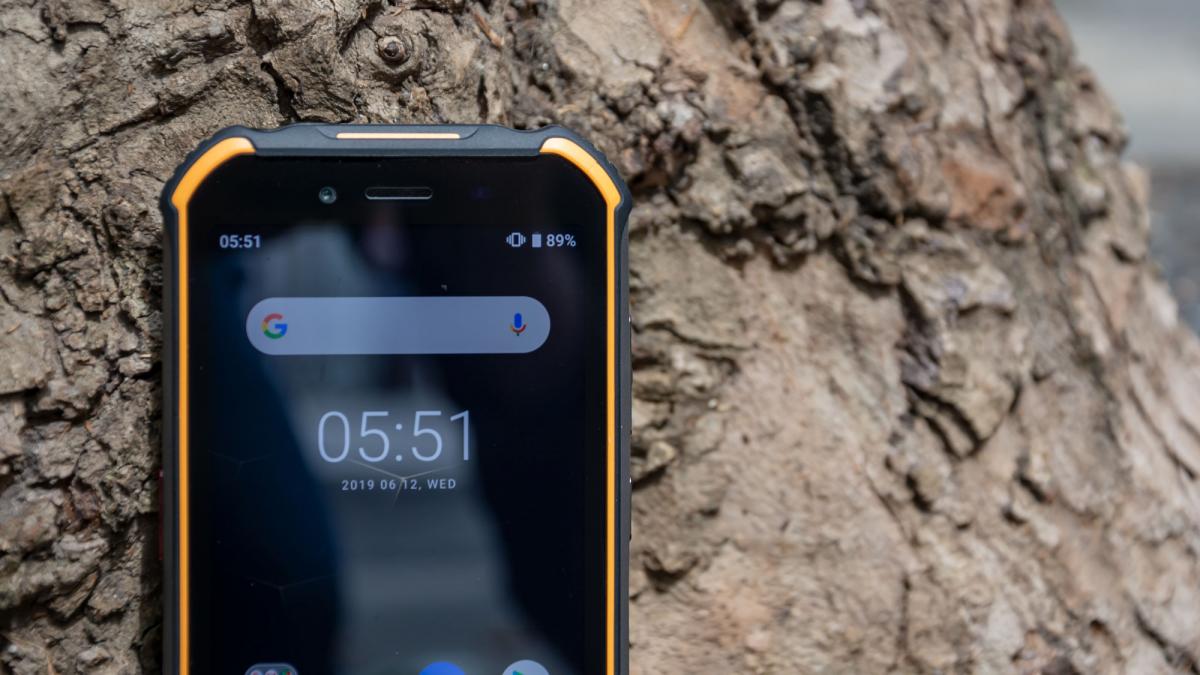 This should provide reassurances that its innards will be safe, but the precious cargo inside isn’t really all that precious. You’re looking at low-powered MediaTek MT6739 processor, backed by 2GB of RAM. Doogee makes a big deal of this as a power-efficient solution, but given the MT6739 was last seen powering the distinctly underwhelming Alcatel 1X, the early signs aren’t too encouraging, even if the S40’s 4,650mAh battery should keep it ticking along for hours.

The Doogee S40 is a rugged phone that costs just £100. That’s an unusual combination, and means we’re left looking for rivals that are either cheap or rugged. In the Venn diagram of the two, the Doogee stands alone.

Let’s start with rugged first, as it’s a significantly shorter list. Our current favourite is the AGM X3, a powerful rugged phone that comes with a Snapdragon 845 for £560. It’s let down by a weak camera, but that’s a fairly common refrain in this space. The Land Rover Explore (£600) and CAT S61 (£799) are also solid choices. 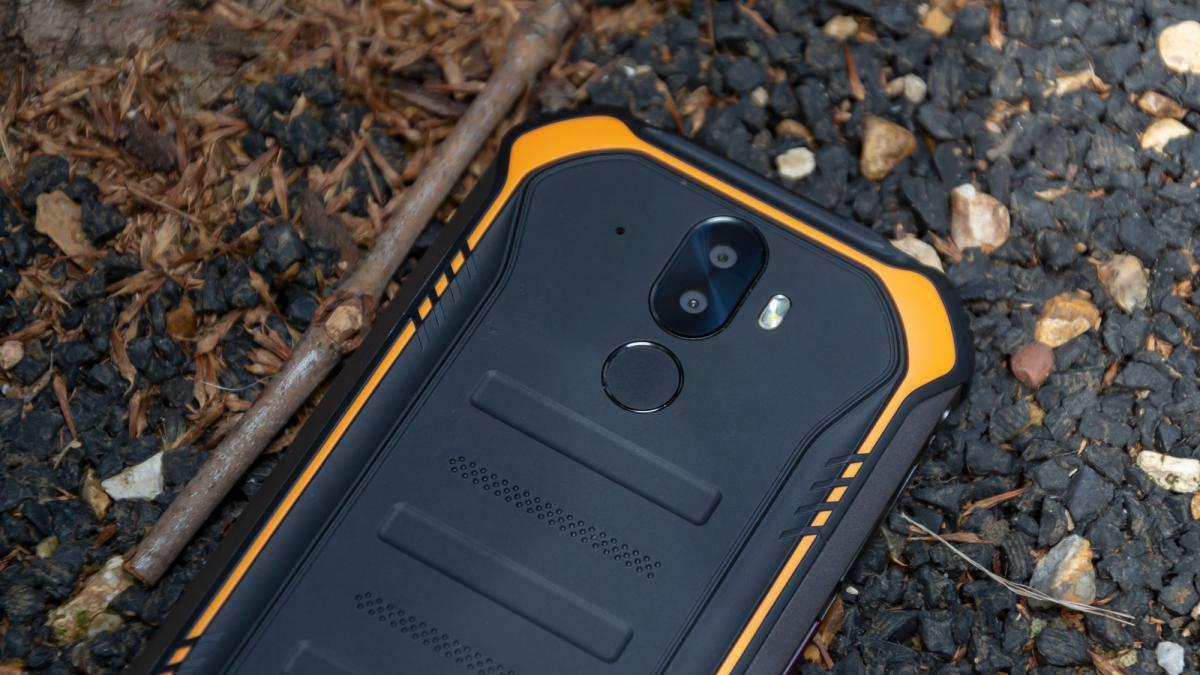 Cheap phones are much easier to spot. For £100, your best bet is absolutely the Vodafone Smart X9, but if you can reach £180 then the Moto G7 Power is well worth stretching to.

Look, rugged phones are never going to win any beauty contests and the Doogee S40 doesn’t even try. It’s angular, bulky and with a tinge of hazard-warning yellow around the frame. But good looks aren’t the point of rugged phones, their raison d’être is that they survive the kind of fall that would otherwise tarnish a handset with delicate and smooth glass-coated exteriors.

And in that regard, it’s certainly hard to fault. The Doogee S40 feels reassuringly chunky in the hand, and with a rubberised back, there’s little risk of dropping it unexpectedly. But hey, if you did it would almost certainly survive to tell the tale.

It’s also worth highlighting a couple of very good points for a £100 handset. Firstly, it has a fingerprint reader. Yes, that’s been a staple of flagships for some time, but it’s still a bit of a luxury at this price, so good on Doogee for including it. 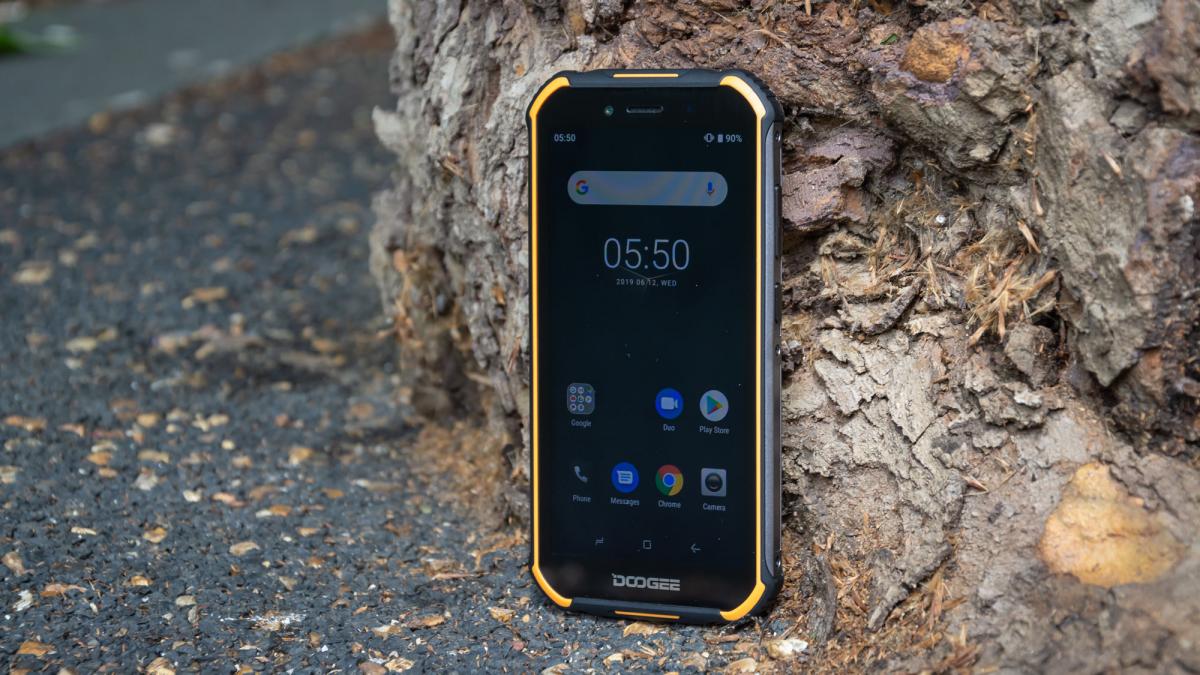 Secondly, its minuscule 16GB of internal storage can be expanded with a microSD card, and it maintains the headphone jack too. Both of these (and the micro-USB charging port) are plugged by rubber covers to maintain that IP68 level of waterproofing, meaning it can survive a dunking of up to 1.5 metres (assuming you remember to keep the caps closed).

The Doogee S40’s screen measures 5.5in across the diagonal and is encased in thick black bezels all the way around. It’s frankly not that great with pretty weak viewing angles and somewhat washed-out colours, but it does the job for the most part.

As for technical specifications, it’s an LED panel with a resolution of just 480×960, so you’re looking at a rather grainy pixel density of 195ppi. It gets bright enough, reaching 431cd/m2 in bright conditions and covers 83.7% of the sRGB spectrum, but colour accuracy is weak and it all looks a bit faint and unimpressive, despite its 1,285:1 contrast. In short, it’s a much weaker screen than both the Alcatel 1X and the Vodafone Smart X9.

Phones like Xiaomi’s Pocophone F1 and the OnePlus 7 have proven that Chinese handsets can undercut more established brands without compromising on performance. But the Doogee S40 proves that this approach has limits. The S40 isn’t a strong performer, not by any means, and actually aligns more closely with handsets in the same price bracket, to an extent.

As you can see, the MediaTek MT6739 does a similar job here as it did when powering the Alcatel 1X, which is far from ideal. By contrast, the Vodafone Smart X9 is significantly stronger, especially in the multi-core benchmark. For £80 more, the Moto G7 Power is stronger still.

Graphically, there aren’t really any winners here. Three frames per second for the Doogee S40 and Alcatel 1X is simply dire, and once again the Vodafone Smart X9 and Moto G7 Power are significant improvements. But to be honest, none of these will be good for much more than simple 2D games.

Battery life is where the Doogee S40 comes into its own – which isn’t surprising given it packs a whopping 4,650mAh-capacity battery. That translates into stamina of 15hrs 12mins in our standardised video rundown test, putting it leagues ahead of pretty much everything. That’s aside from the G7 Power, of course, but that’s because the ‘Power’ part of its name refers to the massive 5,000mAh cell that keeps things ticking along for well over 26 hours.

Unusually at this price point, the Doogee S40 comes with two cameras on the back. The main snapper is an 8-megapixel, f/2.8 affair which is supported by a 5-megapixel depth-sensing lens. Incredibly for a modern smartphone, it doesn’t seem to have any form of HDR that neither myself nor my colleagues could find, but that could be down to the somewhat unhelpful camera interface as much as anything. This a moot point anyway because this camera isn’t going to win any prizes any time soon. In decent lighting conditions, pictures can look okay, but still somewhat worse than you can do for the same price. Here it is against the £100 Alcatel 1X which, if you recall, was inferior still to the Vodafone Smart X9. As you can see, while both phones try their best at capturing the detail of the plaster above the windows, the Doogee S40 can’t manage it without an awful lot of fuzzy noise. Yes, it was a wet June day when the photo was taken, but if Alcatel can manage without noise for under £100, then so can Doogee.

In low light conditions, there are no winners here. The Alcatel 1X was one of the worst performers I’d seen for low-light shots, and by golly the Doogee has it beat. 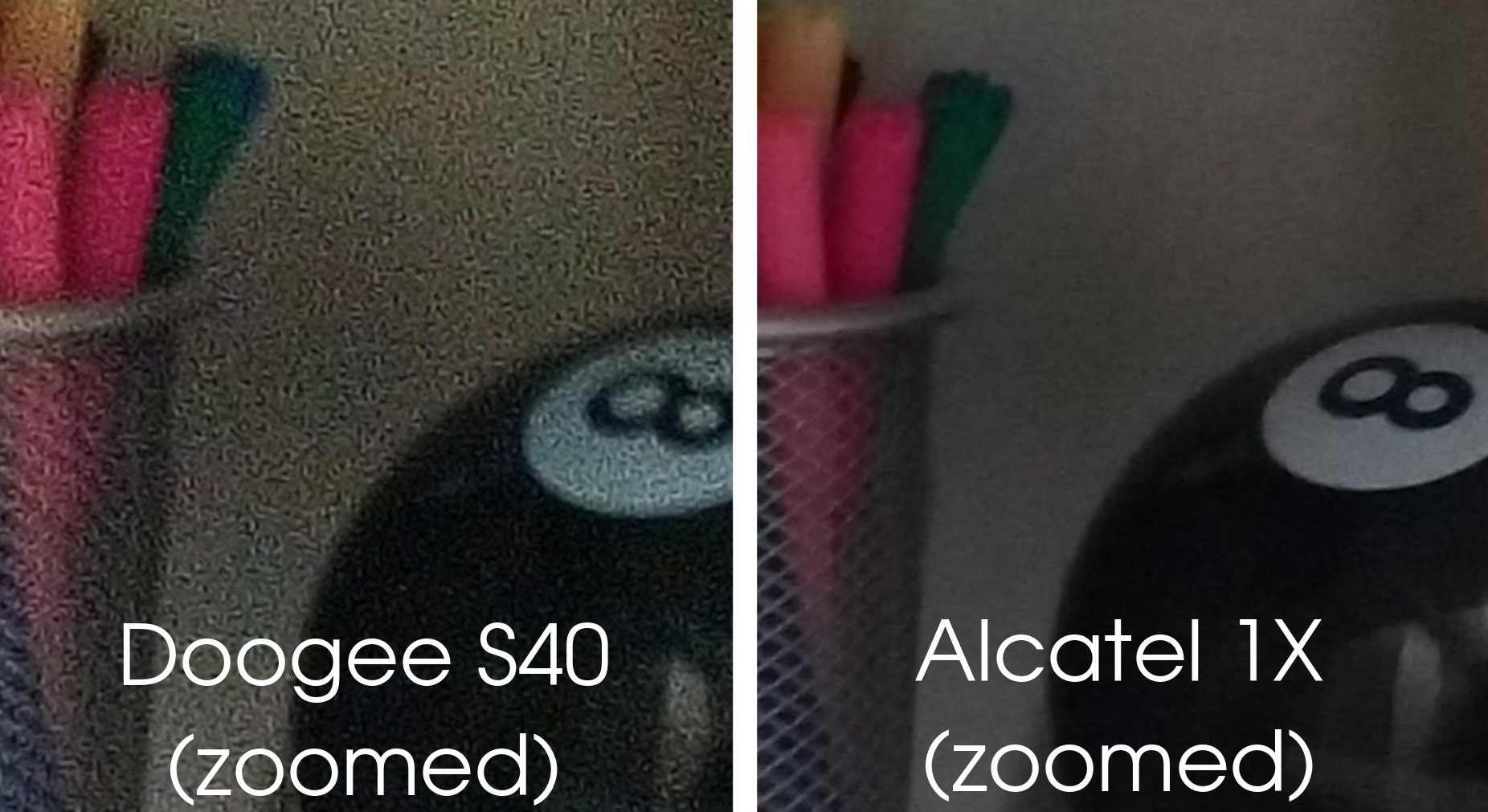 Both are noisy messes, but the Doogee S40 takes things to an entirely new level, managing to look more like a rushed pointillist painting than anything that should come from the camera of a 2019 smartphone. Also, thanks to the god awful 1/10 second shutter speed, handshake is very noticeable. 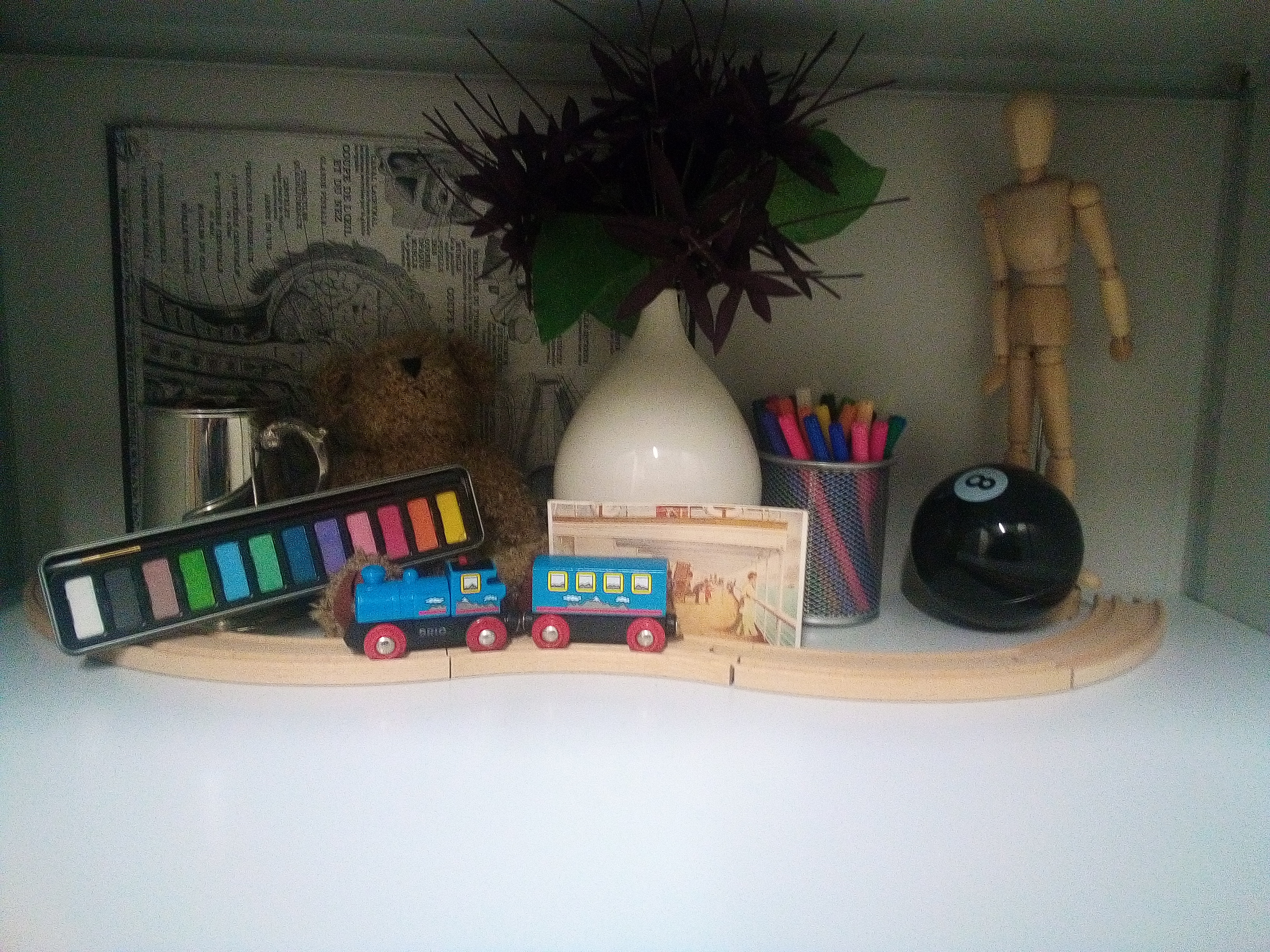 The front-facing camera is another 5-megapixel affair, also with an f/2.2 aperture. Results are fine, and the beauty mode is actually more understated than usual, provided you manage to look past the comically large bug eyes. 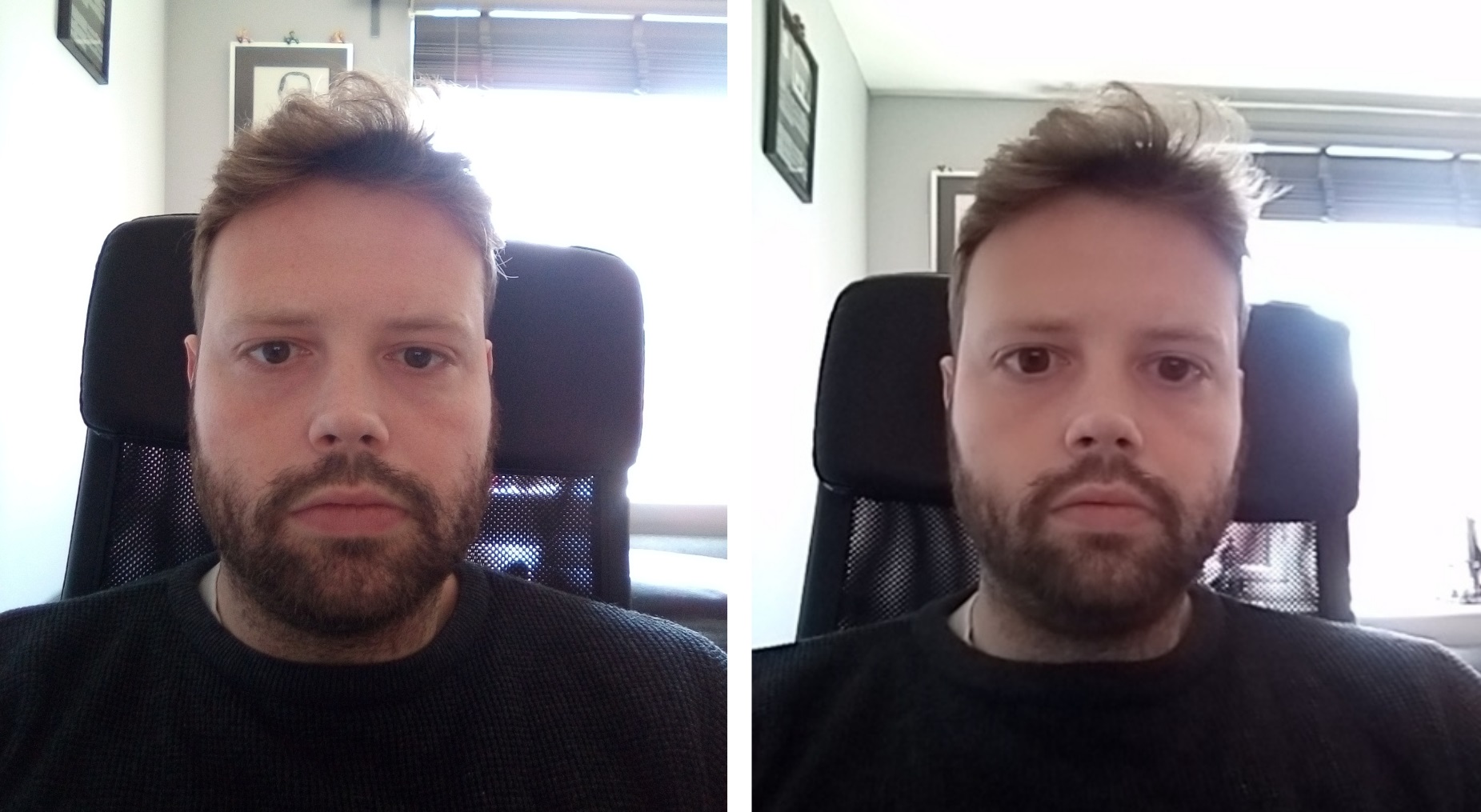 You’ve got to credit Doogee for trying something new. This is the first rugged phone I’ve seen for such a cheap price, but the question is why it needs to exist in the first place. If your phone is so important that you need military-grade protection then, bluntly, shouldn’t you be paying over £100 for it?

In any case, the Doogee S40 offers very little in the way of recommending other than its price, battery life and ruggedness. It’s slow, the screen is weak and the camera is pretty dreadful. If you have £100 to spend, get the Vodafone Smart X9 instead and if you have a few more pennies lying around, then opt for the Moto G7 Power. If you still have your heart set on a rugged phone, then the AGM X3 remains the best of the bunch.

Don't miss a deal at Ancestry
Best offers at John Lewis
Discounts, Sales and Deals at Marks and Spencer
Save your money with Vodafone UK
Online-Shopping with TalkTalk Phone and Broadband
Best products at Bodybuilding
Latest Posts