Small, compact and simple to fly, DJI’s latest drone is a real crowd-pleaser

Drones have been the next big thing for ages it seems, but flying one has always been a bit of a pain. That’s something DJI is aiming to fix with its latest flying wonder – the DJI Spark – a portable drone you can control with the wave of your hand.

By coupling the magic of live image analytics with front-facing object-avoidance sensors, the DJI Spark can tell if a human is standing in front of it, and recognise when that human is holding up a hand in front and whether they’re waving it left, right, up or down.

The drone can even land gently on your palm if you hold out your hand beneath it. Sounds impressive.

Well, sure it does, but doesn’t every selfie drone you’ve read about recently? The question is, does it actually work? The big surprise is that the answer to this question is yes. 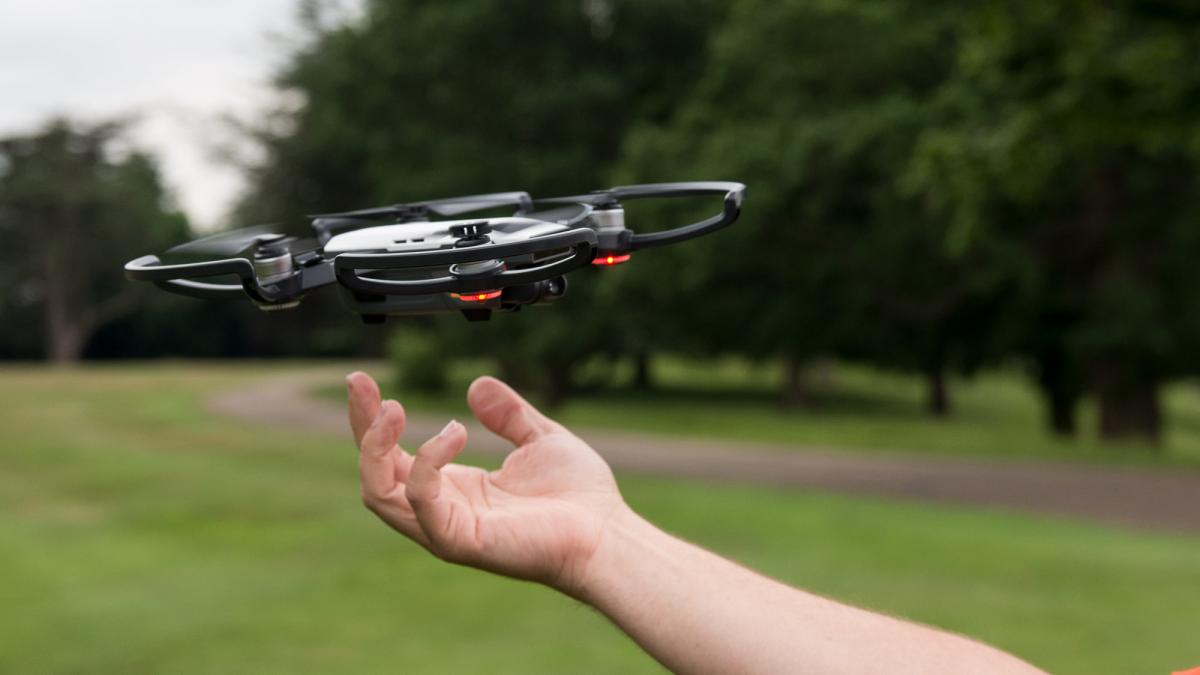 First, though, let me get one thing out of the way. This isn’t going to rock your world and neither will gesture-based flight replace the physical remote control as the most effective means of controlling a drone. It’s incredibly clever, though.

You don’t even need to pair the drone with your phone or the remote control to take off and snap a selfie or track you as you walk around. Once you’ve powered on the drone, all you need to do is hold it at the tips of your fingers and double-tap the power button on the rear.

After steadily spinning up its rotors, the drone tugs free of your grip and floats in front of your face like an oversized wasp. You can then go about the business of controlling it with your hand, which DJI calls “palm control”.

There isn’t much you can do in this mode, to be brutally honest: you can wipe your palm slowly left, right up and down to move the Spark in those directions. You can form a rectangle shape with your thumbs and forefinger to trigger photo capture. 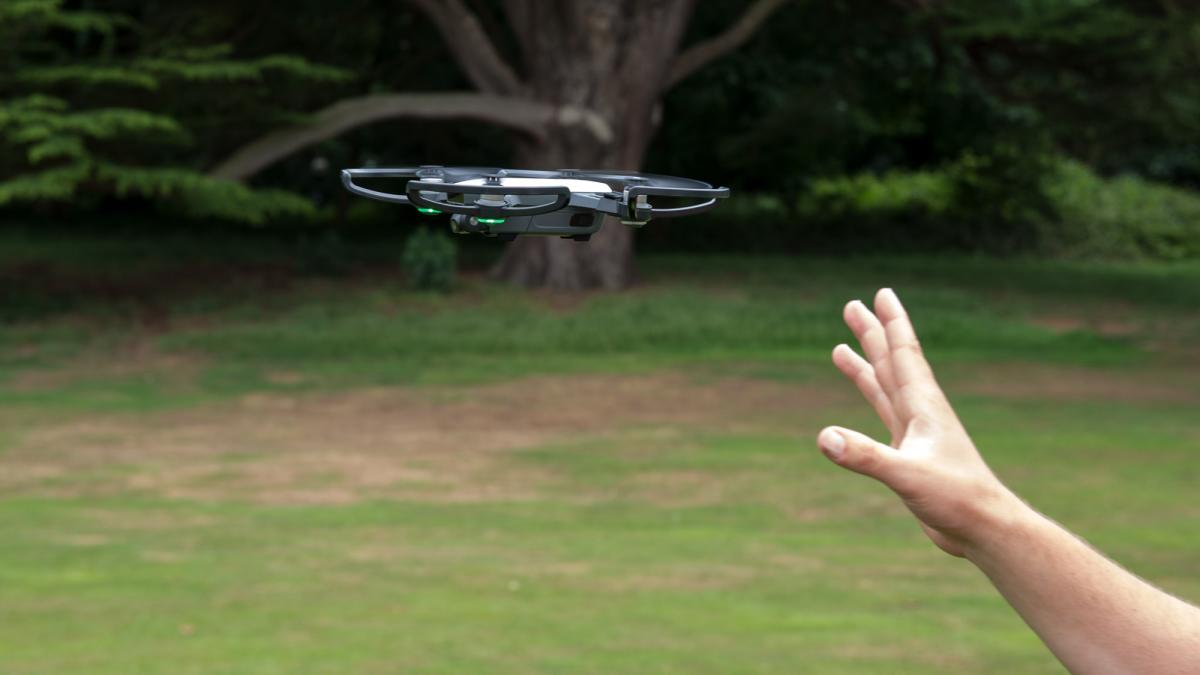 That’s not all, though. Wave your hand left and right for a couple of seconds in front of the Spark and the drone will fly steadily backwards and up for a wider view while simultaneously entering object-tracking. This allows it to follow you around like some faithful airborne canine, again without you having to touch a controller.

You can still snap a selfie by making a rectangle while it’s tracking you, and you can summon the Spark back to you by holding your arms in a “V”. To land, approach the drone with your palm facing up – imagine you’re feeding sugar to a donkey on Blackpool beach – and the Spark’s downwards-facing sensors will land with delicate precision on your hand.

The only thing that doesn’t work 100% of the time is the waving gesture to send the drone away from you; half the time the drone seemed to simply move manically from side to side. And you’ll need to watch your fingers, too, because there’s nothing physical to prevent you from poking your digits through to the blades. 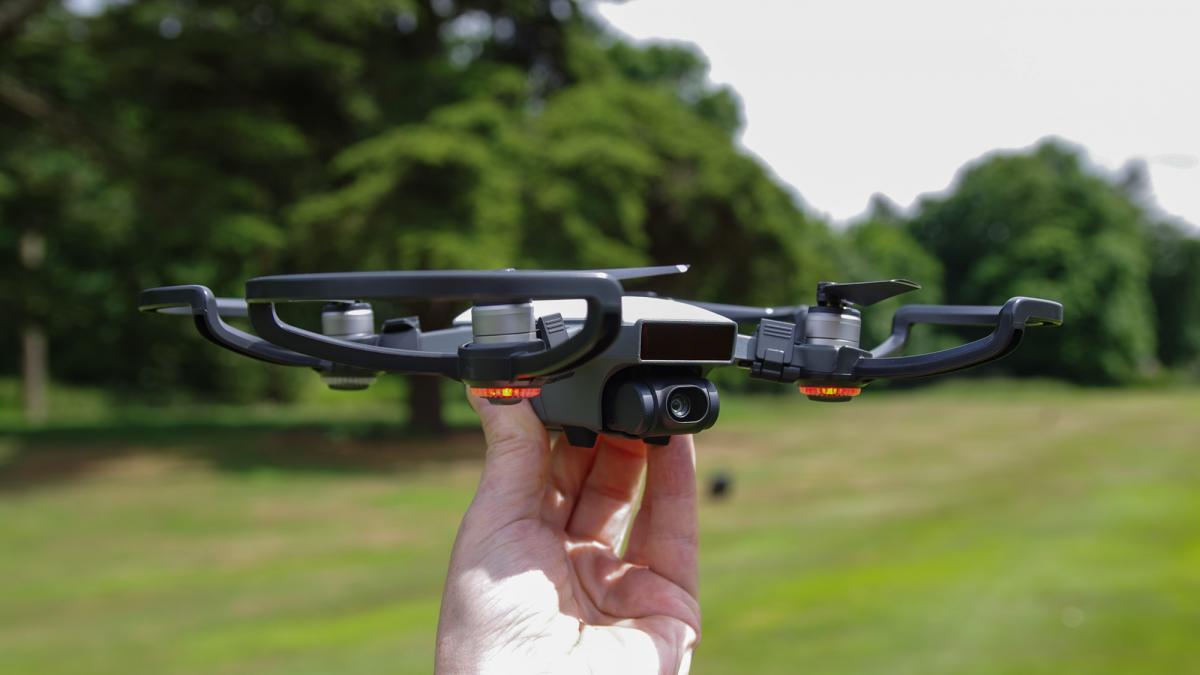 It’s all clever stuff. The reality, though, is that the appeal of the DJI Spark doesn’t lie in gesture flight, but in its small size and light weight.

This isn’t the first time DJI has produced a compact drone. I tested the DJI Mavic Pro last year, and that packed all the camera tech and the sheer flyability of the company’s larger Phantom models into a package the size of a small loaf of artisan bread.

The Spark is even more compact, though. At 300g it weighs less than a couple of smartphones and, although its rotor arms don’t fold in like on the Mavic Pro, the rotors themselves hinge in the middle, so it stows away very neatly indeed. In fact, when stashed in its square polystyrene case, the whole thing is around the size of one of those old-fashioned CD storage cases and eminently baggable.

DJI includes this case plus a pair of spare rotor blades, a USB cable, charger and one battery (with 16-minute flight time) in the basic kit for £519. There’s also a more expensive “Fly More Combo” package available, which costs £699 and includes rotor guards, an extra battery, a multi-battery “hub” that can top up three batteries at once and a physical remote control, plus a full set of spare rotor blades and a tote bag to carry everything around. 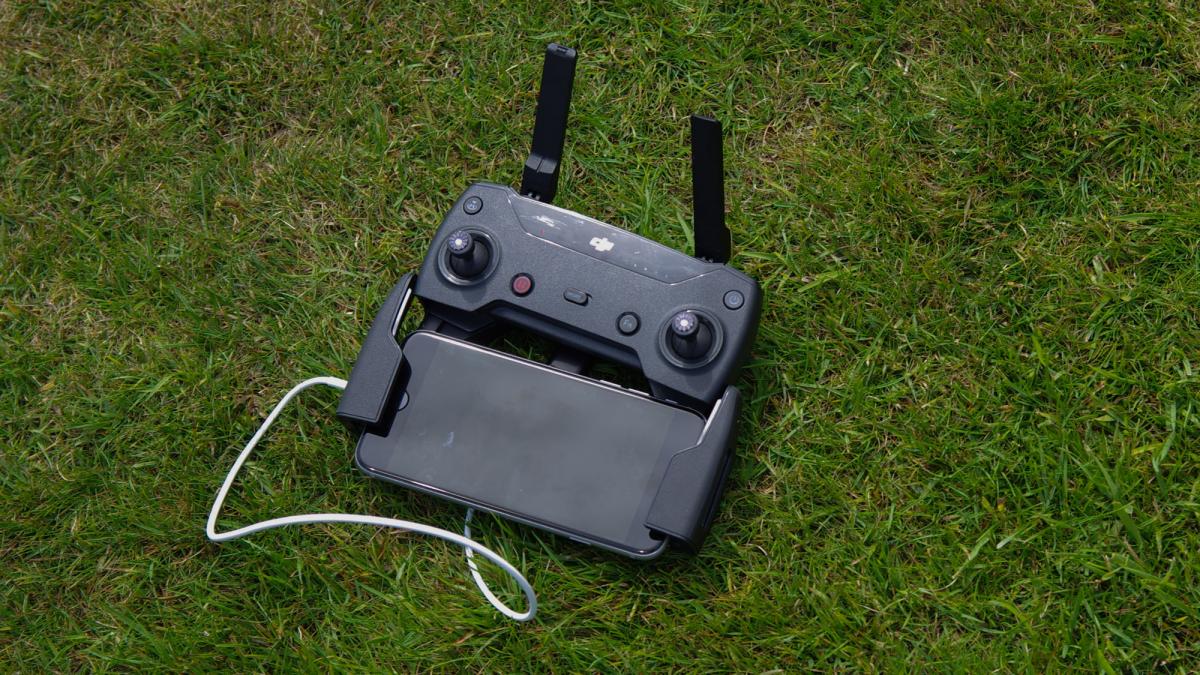 The drone itself is a work of art and beautifully put together. On the belly of the drone is a pair of sonar sensors and a positional camera, which allow you to safely fly the Spark indoors and keep it flying in a stable manner at low altitude.

At the front, behind a deep-red transparent rectangular panel, lies the drone’s “3D sensing” system, which it uses for object avoidance and tracking. Beneath that is a 1080p/12-megapixel camera with a 1/2.3in CMOS sensor, mounted on a fully functioning, mechanically stabilised gimbal for smooth video shots and crisp photos.

Finally, a flap on the rear covers the Spark’s micro-USB slot and charging points. There’s also 2GB of internal storage for the temporary storage of pictures and video. 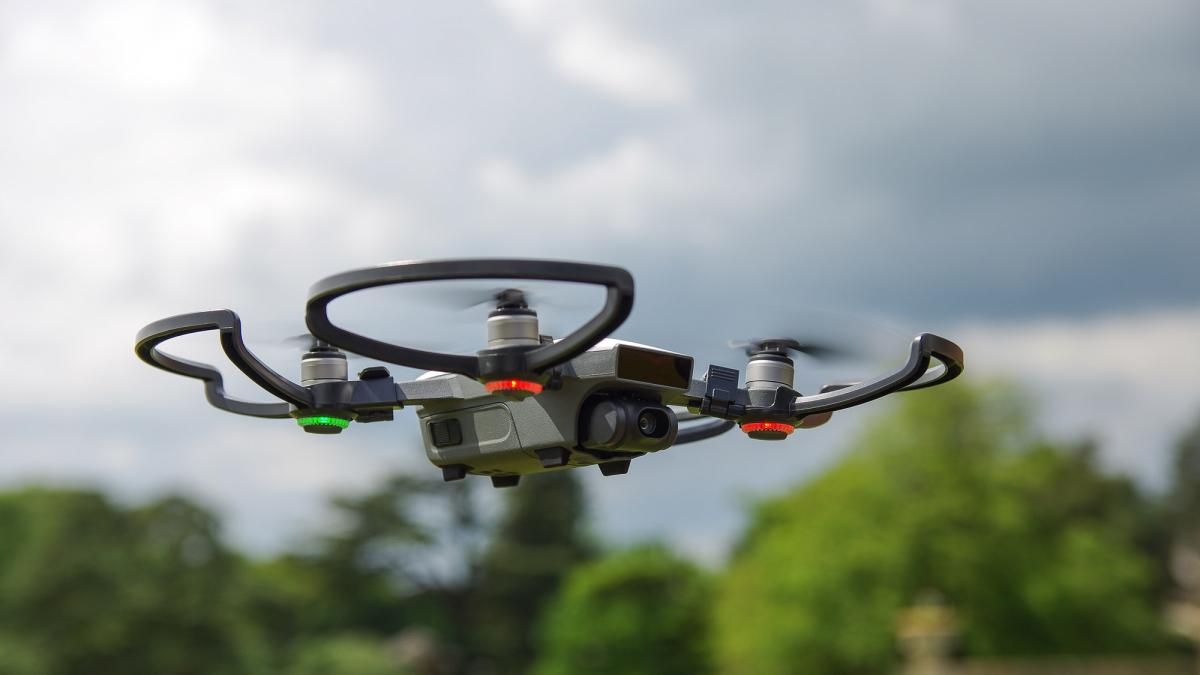 The Spark is just like one of its bigger brothers, in other words; the key difference being that you don’t get a physical remote control in the box and the camera shoots 1080p (at 30fps) rather than 4K footage.

Still, that’s not bad for £519 and, although it’s a thing I’m not particularly fond of, flying via the touchscreen of your tablet or smartphone does work rather well. It’s essential, in fact, if you haven’t purchased the physical remote control and you want to fly the drone further afield.

Like other drones in the DJI range, the Spark is replete with safety features. It won’t let you take off if it senses you’re near an airport, for instance, and it will tell you if you’re flying in what might be a restricted area. The app’s Academy section even includes a flight simulator so you can practise your skills before actually taking to the skies. 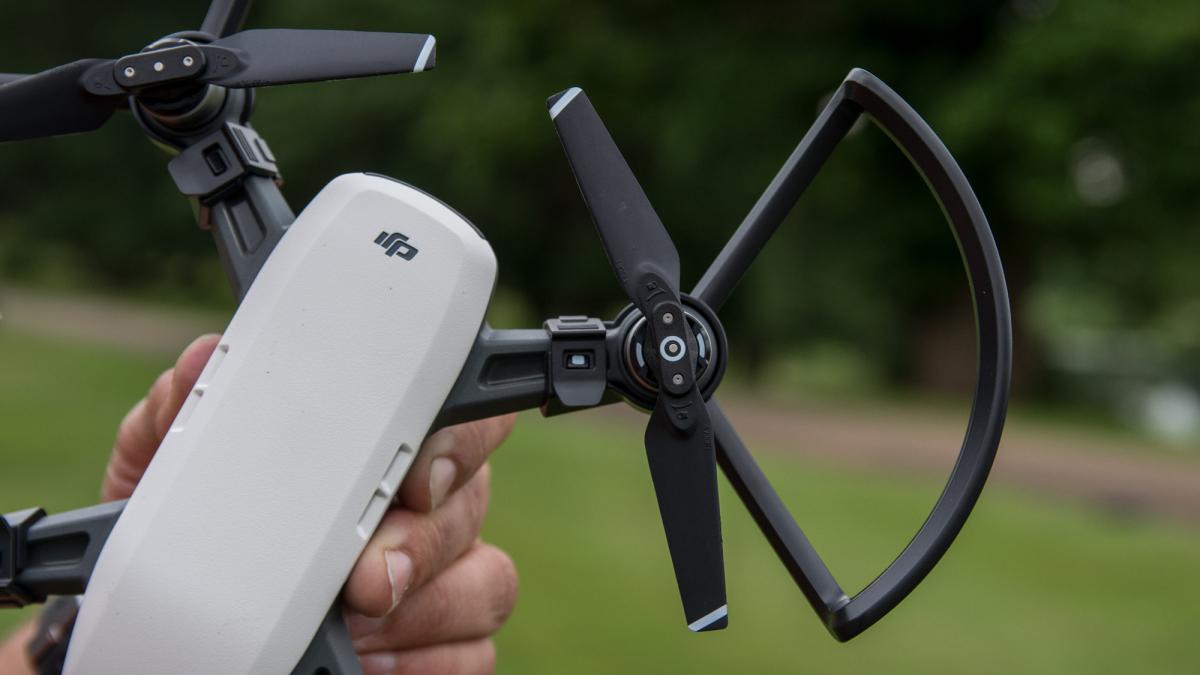 As well as training, the smartphone app provides access to the drone’s full range of camera functions. For most of my testing, I left the camera in automatic mode, but there’s also a fully manual mode that lets you adjust ISO, shutter speed and white balance manually. There’s a bunch of other shooting modes to choose from as well, including multi-shot, auto-bracketing, timer photos, shallow focus and panoramas.

Another thing that the app lets you do is install new firmware to the drone. This isn’t an academic point: DJI recently released an update to fix a power-management bug which had the potential to cause a disastrous mid-air shutdown. That’s a bit embarrassing, but it’s good to see the company actively addressing the issue. To ensure no dangerous units are left out in the wild, any Sparks that are still running the old, buggy firmware will refuse to fly after 1 September.

Once you’re safely in the air, you can simply take control manually, or choose one of the semi-automatic modes: there’s tripod mode, object tracking, tap to fly (where you point to a point on the map onscreen and the drone flies directly to that point), gesture mode and quick shot mode.

And flying is responsive and fun, even via the touchscreen. I’m particularly fond of the way the phone confirms changes of direction and altitude a with a buzz of haptic confirmation – it gives more of a sense of physical control than I’ve had with other touchscreen-control systems.

The Spark is seriously quick. It can reach speeds of up to 31mph (50km/h), but it isn’t quite as stable in breezy conditions as the Mavic Pro or the DJI Phantom 4. 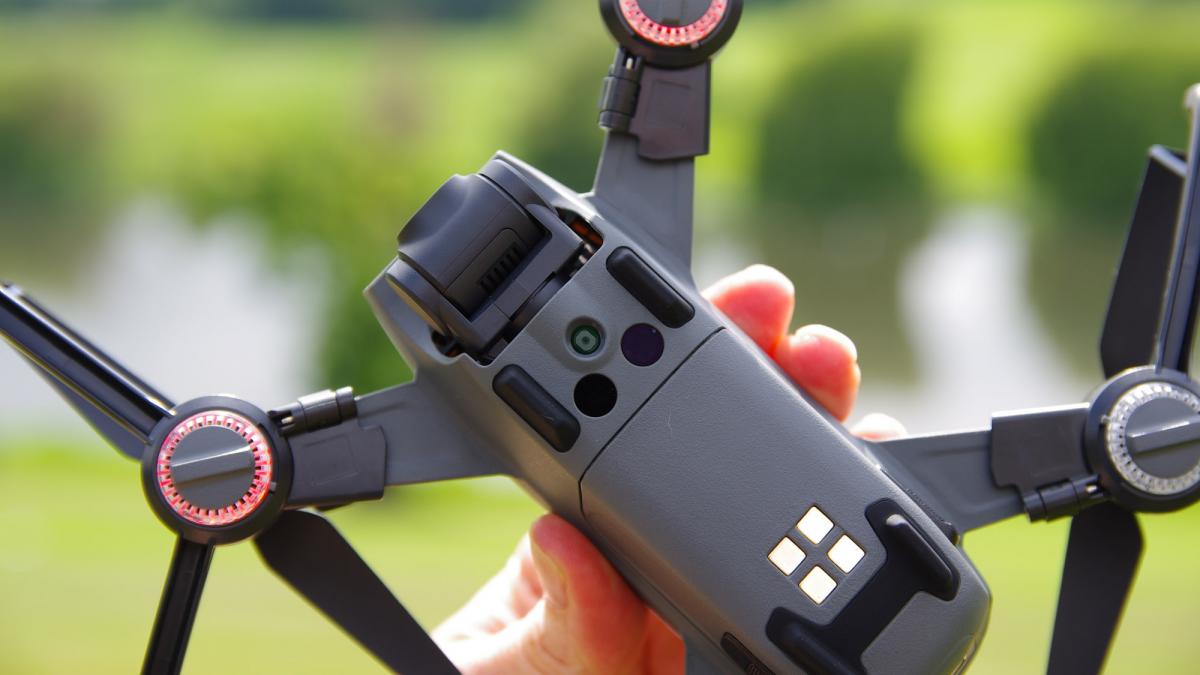 Image quality is pretty good, though. There’s plenty of detail and smooth auto-exposure adjustment in video mode, and the stills are decent, too, although you should expect smartphone quality rather than DSLR levels of dynamic range.

DJI also throws in a basic automatic video-editing app that compiles a highlights reel for you and puts it to music, but this is rather basic, and not a patch on the tools provided with the GoPro Hero5 Black camera, for instance. You’re better off sucking the media down onto your phone and importing them directly into Quik or similar if you want quick, effective auto-editing.

The main weakness of flying a drone with a phone, however, is that usually range is restricted compared with the remote control. In this case, though, it’s not too bad. Transmission range extends to 100m horizontally (50m in altitude) compared with 500m with the remote controller. In fact, the maximum limit is 2km with the controller, but this isn’t available in Europe due to radio-frequency regulations.

The Spark is a bit of a mishmash. On the one hand, it’s a highly capable drone capable of capturing top-quality aerial video and photos. It flies well, it’s packed with features and it’s incredibly compact for a drone that packs in so many serious features.

However, with a flight time of 16 minutes, I’d want at least one spare battery and, although the smartphone and gesture controls both work well, I’d always want to be able to use a physical remote controller in a pinch. Adding these items pushes the cost up significantly.

Still, though, the Spark does add a different choice for those who need the option of being able to capture high-quality aerial video and can’t – or don’t want to – take a full-sized drone with them. It’s a fantastic achievement technologically, and an immensely satisfying thing to fly.

Don't miss a deal at Mobiles
Best offers at Vimeo
Discounts, Sales and Deals at Argos
Save your money with Go Daddy
Online-Shopping with Surfdome
Best products at Nike DE
Latest Posts