A superb convertible Chromebook at a price most can afford and it packs all the power you’ll need, too

Asus, Acer and HP long ago worked out that there was a market for Chromebooks that were as sleek and stylish as their macOS and Windows equivalents, but it’s taken a while for Dell and Lenovo to join the party. The Inspiron Chromebook 14 makes the wait feel worth it. With a premium, all-metal chassis and a narrow-bezel 14in screen, it’s the kind of Chromebook that can sell to both executives and the high-end home market in competition with the best Windows devices. 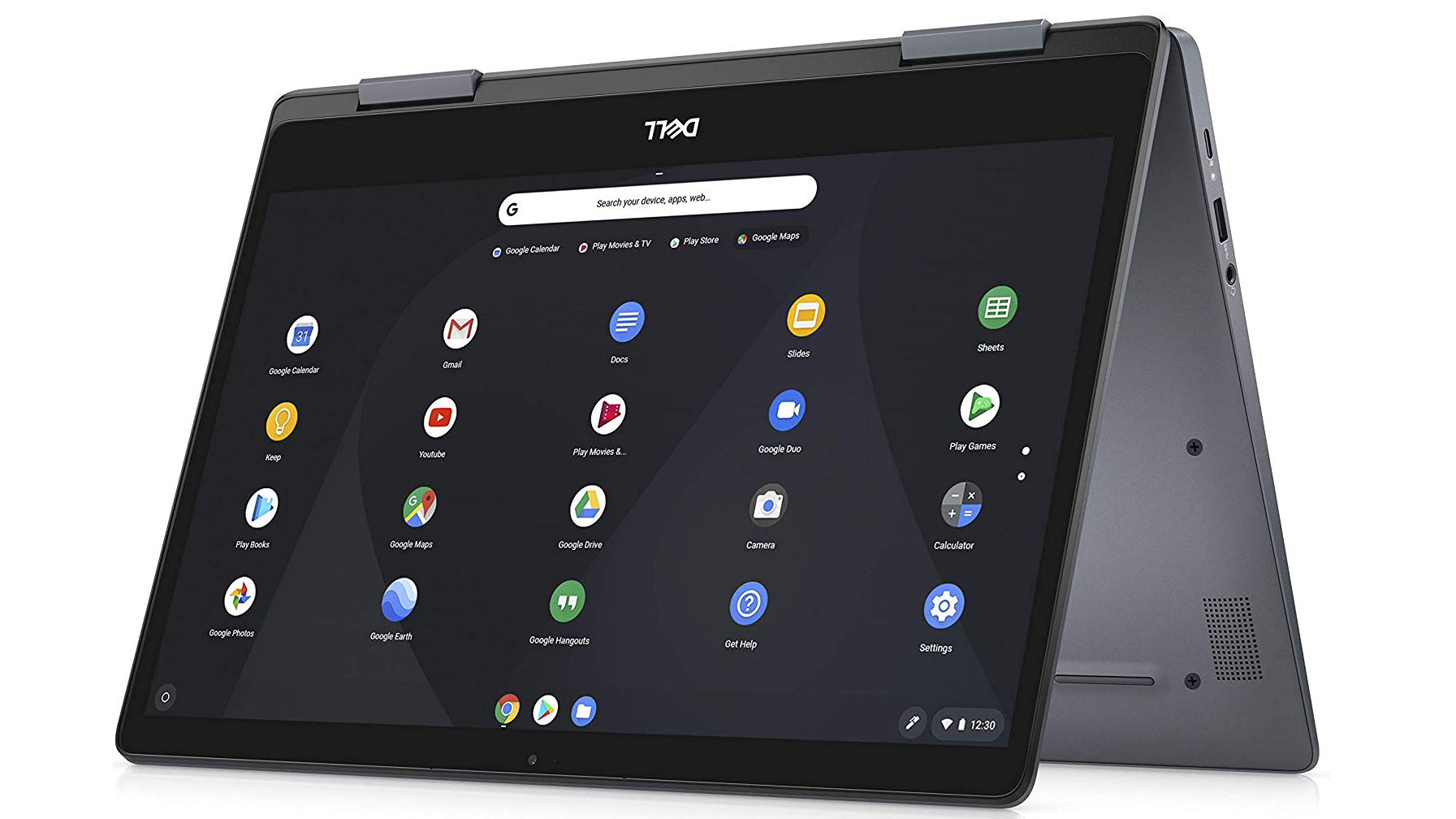 Photos can’t do full justice to its beautiful design, with this 2-in-1 convertible dressed in a cool grey gunmetal finish and matching lid. At a glance, it looks like a unibody design, but there is a seam at the bottom where the base meets the keyboard surround. All the same, it feels solid, light and it’s eminently portable, too: less than 18mm at its thickest point, and weighing 1.8kg. We’ve seen lighter 14in Chromebooks, but not one that feels so robust.

The 360-degree hinge means you can use it in tablet or tent mode, and while it’s a little too heavy for a super-sized slate, there is a good reason to use it in this orientation. Tucked away at the front of the base you’ll find a passive stylus, and while it’s neither as pen-like or as convincing as the EMR stylus in the Lenovo Chromebook 500e, with a little lag as you scrawl and jot, it’s still great for quick sketches or taking notes in meetings – or indeed doodling offensive pictures when you’re sitting bored in one (that may just be us).

We also like Dell’s backlit keyboard. It’s a little on the light side, but it’s fast with a reasonable amount of travel, and the only things that let it down are the shrunk-down Shift key on the left-hand side and Ctrl key on the right. The touchpad is just as good; it’s always accurate with a nice smooth feel. Crucially, it’s generously sized too, which is useful for Chrome OS. 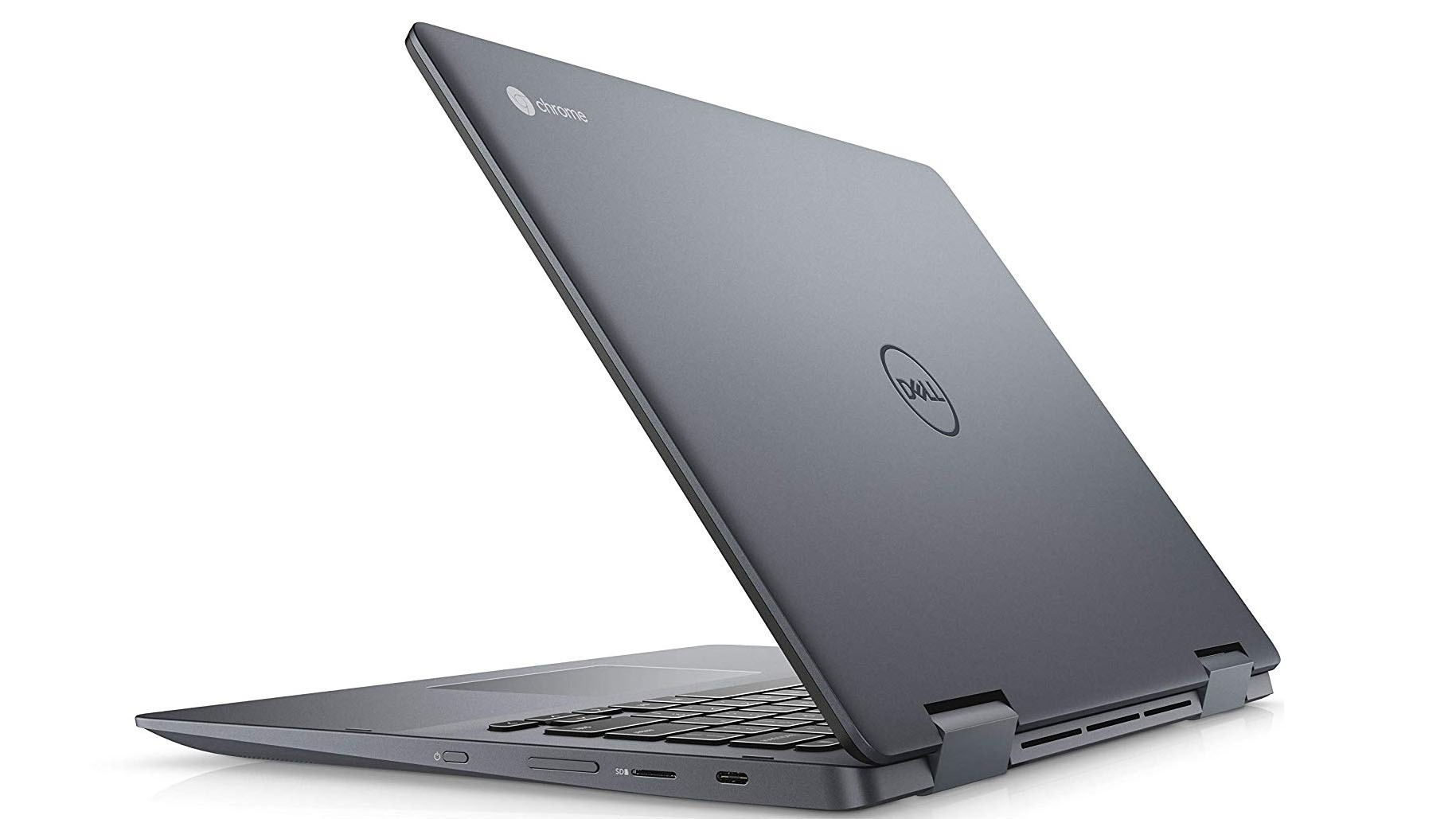 Chromebook screens used to be an embarrassment. Even if you had a Full HD 1,920 x 1,080 panel, as opposed to plain HD, it was often dim with a woeful grasp of colour. The Inspiron shows how much this has changed, however, with its 1080p resolution, a maximum brightness of 323cd/m2 and coverage of 86% of the sRGB gamut.

It’s close to being colour-accurate and really crisp, vibrant and punchy when chaining Netflix TV episodes or watching movies. If only the sound was as good; it’s tinny and quite hard to listen to at any volume. Dell ships the Inspiron Chromebook 14 with an Intel Core i3-8130U processor, where the two cores can run four threads at speeds of up to 3.4GHz. With a Windows laptop this wouldn’t be special, but Chromebooks fly on a relatively lowly Core i3, and the Inspiron came second only to the Lenovo C630 across all our tests, even in the most demanding multitasking benchmarks.

Provided you can realistically do a particular task on Chrome OS, you’ll be able to do it on this Chromebook, even with just 4GB of RAM. What’s more, you can do it in peace and quiet, as fan noise is negligible until you push the Inspiron Chromebook 14 hard.

What really surprised us, though, was the battery life. The Dell survived over nine-and-a-half-hours of video playback before the screen conked out, putting it ahead of every other Chromebook apart from the Acer Chromebook 11.

This isn’t the fastest Chromebook on test or the most luxurious. It’s not quite as ultra-mobile and versatile as Google’s own flagship Pixelbook. Yet it’s fantastic value, great-looking and practical, giving you a near-perfect balance between ergonomics, mobility and power. Given limitless budgets, we’d pick the Pixelbook. Back in the real-world, spending our own money, we’d buy the Chromebook 14.

Don't miss a deal at Turbo Tax
Best offers at Sephora
Discounts, Sales and Deals at Surfdome
Save your money with EBay DE
Online-Shopping with Groupon
Best products at H&R Block
Latest Posts