Cyberpower PFC Sinewave CP1000PFCLCD UPS review: This is the perfect power backup for most PCs and Macs

The CyberPower PFC Sinewave CP1000PFCLCD has many of the features necessary for acting as a stable uninterruptible power supply (UPS) for modern PCs and Macs, including gaming systems and those used by creative professionals. This 600-watt capacity unit can keep a fairly high-end computer system with external drives and monitor running for the few minutes necessary for safe shutdown when maxed out. A more modest setup that draws just 300 watts could chug along for nearly 10 minutes, letting you bridge a short, but sustained outage.

It’s a surprisingly compact unit, at 4 x 9 x 10.4 inches (WxDxH) and weighing just under 16 pounds, and is sleekly designed and styled without looking too fancy for a UPS’s quotidian function. Its front-panel LCD display contains a fair amount of information by default, and a Display button to cycle through more of it.

Some features can be programmed through the front panel, though it requires a long panel in a large folded instruction manual to explain the indicators and a separate letter-sized sheet with programming instructions if you want to change settings. This unit has a USB connection and CyberPower provides Windows, macOS, and Linux software for handling most settings more easily, as well as monitoring. (There’s even a serial port for older computers.) This model also works with UPS features built into some operating systems. 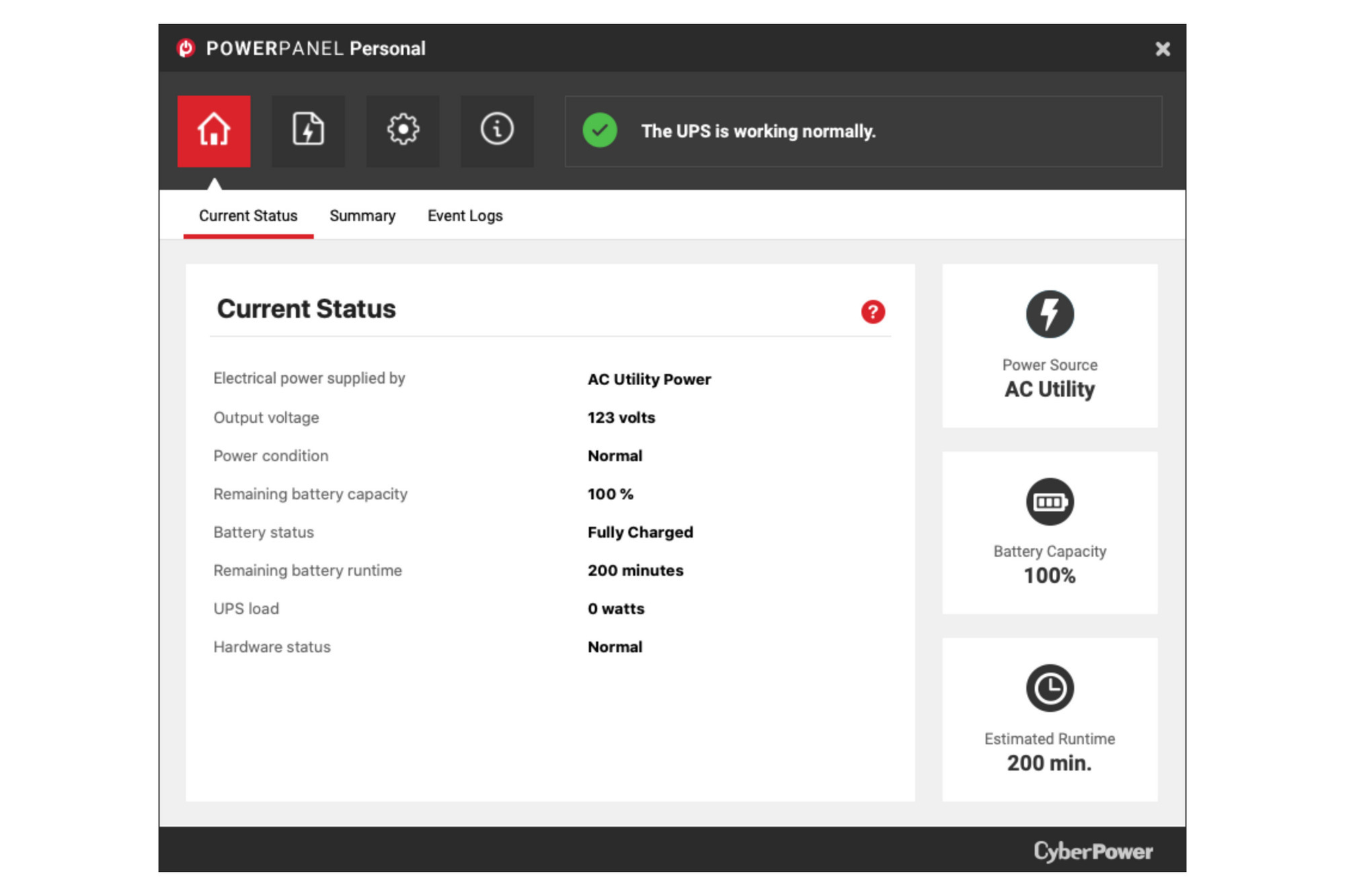 Via the OS or using CyberPower’s PowerPanel Personal, you can set parameters for how long before attempting an automatic shutdown when the UPS switches to battery power, among other settings, including scheduling power off and on times.

This CP1000PFCLCD produces enough power for the price that it could be useful and affordable to provide a power backup for home or small-office network hardware that totals 50 to 100 watts, with a runtime of more than an hour on the lowest end, if you have frequent or longer outages, and want to keep your network online while using laptops and mobile devices that have their own batteries to keep them going.

This model, however—and the UPS tower series of which it’s part—has features specifically designed for modern computers, attempting to ensure that the power it outputs is as clean as possible no matter the power variation and outages that occur. Modern PC power supplies are sophisticated, working over a variety of different power systems in different countries. With that flexibility comes fragility, as they rely on cleaner power. 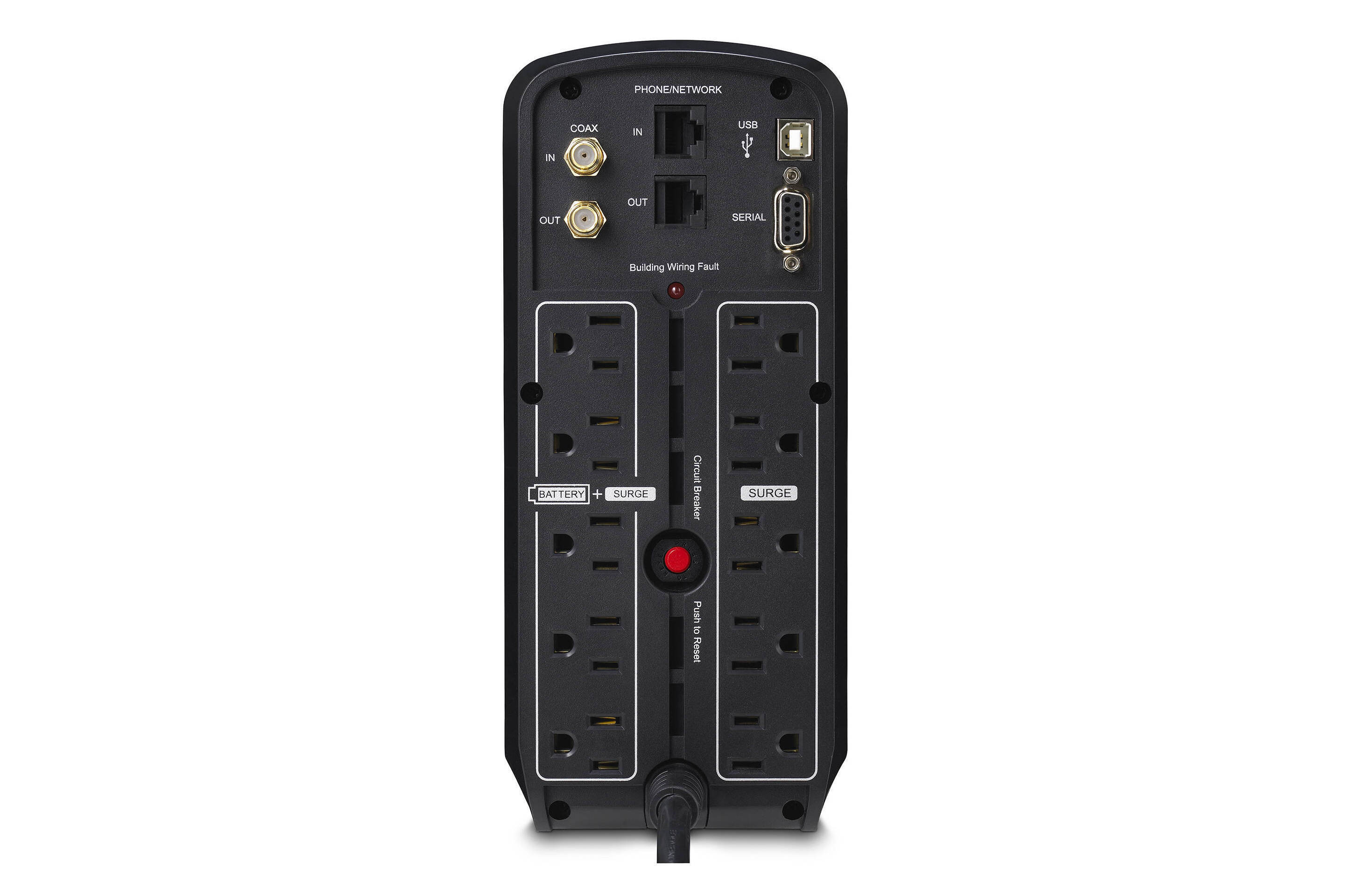 Most computers of the last several years feature power supplies with active power factor correction (PFC), which requires a fairly pure sine wave, or the visualization of the speed of change of power in alternating current as it cycles back and forth, reversing direction like pivoting a small basin left to right to left.

Power lines produce a pure sine wave that’s extremely smooth. UPSes can produce either a pure one or a simulated sine wave, which is rough and chunky, but works fine with older power supplies and solid-state hardware.

The CP1000PFCLCD has a pure sine-wave feature, and that lets it not damage or impose wear on an active PFC power supply when it’s feeding power from its internal battery, as well as avoiding making the power supply buzz or hum, which it can if running off a chunky sine wave.

This UPS model is also line interactive, which means that it is always conditioning power, raising sags (down to 90 volts) and reformatting higher voltages (up to 140 volt), as well as correcting any irregularities in the AC cycle—those are rarer, but can damage devices, too. These corrections happen using internal circuitry that don’t draw on the battery at all, as long as sufficient power is present to smooth out the problems. That keeps the battery from being used unnecessarily, extending its life. 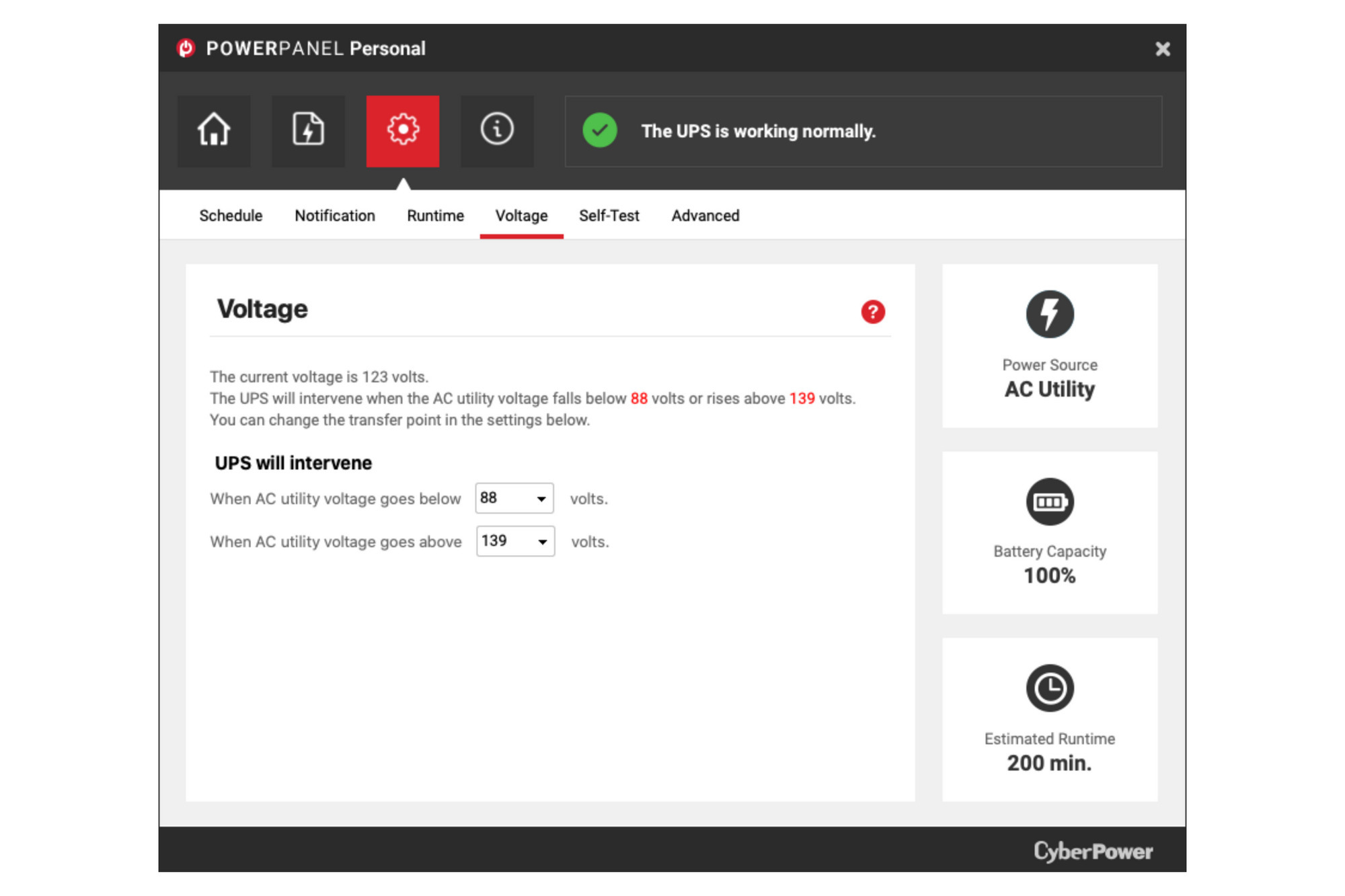 When the battery does need to kick in, CyberPower says it takes just 4 milliseconds (ms), well within what’s needed to avoid a computer or other device losing the continuous pulse of electricity that keeps it processing and not stumbling. The cheaper standby kind of UPS takes from 5 to 25ms to provide power, depending on the model, which might be too long.

CyberPower equipped the CP1000PFCLCD with 10 outlets, spaced a little tightly together; I wouldn’t try to get many wall warts to fit in there. Five of the outlets are connected to the battery and power conditioning, while the other five receive protection against surges, or high-voltage transients, as on a standalone surge protector.

The front display provides quite a lot of information and the unit also produces beeps and alarm sounds based on what’s happening internally with its battery and externally with incoming power. You can mute the sounds thankfully, and one indicator counts the number of power outages if you want to check after the fact.

The CP1000PFCLCD has a wiring fault light on the unit’s back, which you should check when first plugging it in. The LED illuminates red if there’s any wiring issue, such as a missing ground, bad ground, or reversed wiring. If you were to buy this unit and see a red light when plugging this UPS in to power, disconnect it and call an electrician immediately.

CyberPower provides quite a lot of information about the CP1000PFCLCD, and includes a legitimate and useful manual and front-panel programming sheet in the box. However, nowhere online or in the manual does it explain what happens next, if in the course of a power outage the battery fully depletes: does the unit power back up immediately or require a manual restart? It’s likely the latter, as that’s the common approach, but it would be good to state it explicitly or even offer a way to select that option given how much configuration the unit enjoys.

Unlike many UPS makers, CyberPower includes a legible warranty in the box (as part of its instruction manual). The company offers three years’ worth of protection against an unexpected failure of the UPS and a perpetual $350,000 worth of insurance against repairs or destruction of attached equipment. Both the UPS and attached-equipment warranties are available only for the original purchaser, who needs to report a failure within 10 days of the incident and provide the original dated purchase receipt.

There only fly in the ointment with this model was that I could not get CyberSource’s PowerPanel Personal software for macOS (10.14 Mojave) to recognize the UPS, even though it appeared in macOS’s built-in UPS support in the Energy Saver preferences, meaning it was communicating correctly with the computer. On a different Mac running 10.15 Catalina, the software connected after a couple of tries.

The Mac software is also “unsigned,” which means CyberPower doesn’t pay the paltry $99-per-year fee to Apple as a developer to add cryptographic integrity to it, meaning a malicious party could release or modify the software without a user being aware. Users also must take an extra, non-obvious step to bypass macOS protections and install the software, which many Mac users will not know to do.

There’s nothing not to like about the CP1000PFCLCD, if you ignore its wonky Mac software, a minor issue since all the features are available through the front panel and macOS’s Energy Saver preference pane. Well designed, with the right set of features all around, it’s the ideal solution for most modern computer owners, particularly if you live in an area that has frequent power dips, surges, and short outages.

If this unit is too low or too high-wattage for your needs, good news: it’s part of a line of very similar PFC Sinewave models, which run from 510 watts ($134.95) to 1,050 watts ($329.95), and have slightly different front displays and numbers of outlets, with higher-wattage units offering front-panel USB charging ports, too. Any in this series should fit the bill as well as this one.

The PFC Sinewave CP1000PFCLCD packs in the right high-end features for PC and Mac power supplies without scrimping on design, compactness, or outlets.

Don't miss a deal at Adobe
Best offers at Surfdome
Discounts, Sales and Deals at Go Daddy
Save your money with Argos
Online-Shopping with Ticketmaster UK
Best products at Brian Tracy
Latest Posts