When we reviewed the original Creative Outlier Air, we described them as “astonishingly good value for money” at £75. In fact, their only real drawback was fiddly physical controls. The company later released a revamped version, the Outlier Air Gold, offering improved battery life in a fetching champagne colour but touch controls remained notably absent.

The third entry in the series, the Outlier Air V2, finally add touch controls while Creative has also improved the built-in microphones. Perhaps the best news of all, however, is that they’ve released the headphones with a list price of £75, the same price as the originals were at launch.

Creative Outlier Air V2 review: What do you get for the money?

For £75 you get a pair of IPX5-rated true wireless earbuds that operate over Bluetooth 5 and support the AAC, SBC and aptX audio codecs. They’re also certified “Super X-Fi Ready”, which means that they’re compatible with Creative’s SXFI holographic audio technology.

Included with the earbuds are the charging case, which offers just short of two full charges of the buds, a USB-C charging cable and three sets of eartips to help you achieve a secure fit.

The V2 are very similar in design to the original Outlier Air. The earbud housings are drum-shaped with the sections that rest against your ear curved to fit the contours of your lugholes. They now weigh a fair bit less, however, at 6g per bud versus 10g and come in a metallic blue hue rather than metallic black.

The biggest change comes with the addition of touch controls, which replace physical buttons and these are implemented simply and effectively. There are three contextually sensitive modes – Playback, Pause and Call – and the actions assigned to touch controls differ depending on which mode you’re using.

With audio playing, a double tap on either bud pauses whatever you’re listening to, while the left bud can be used to return the start of the current track via a triple tap or long-pressed to reduce volume. The same actions on the right bud skip you forward a track and increase volume. 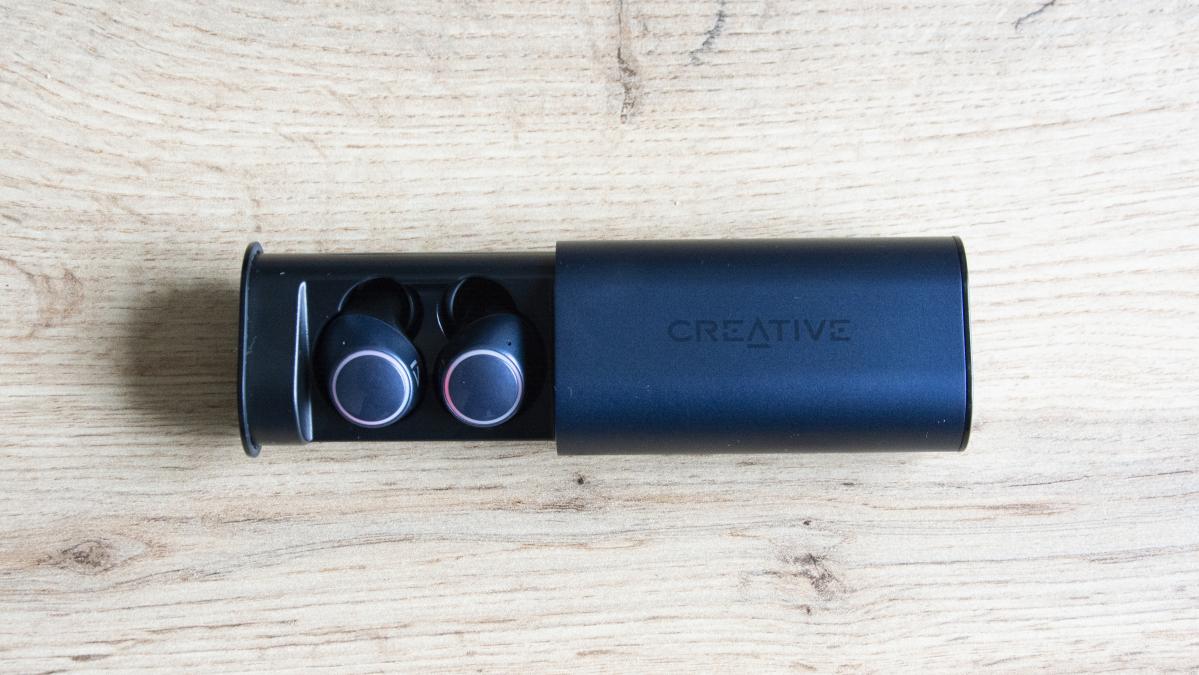 When audio is paused, a triple tap activates your voice assistant and holding your finger on either bud for six seconds puts the earbuds into Bluetooth pairing mode. Call mode controls use a double tap to answer or end calls, a three-second press to reject calls and long presses on the left and right buds to control volume.

The touch-sensitive surfaces are large, which makes locating them a breeze, and they’re perfectly responsive. I like that Creative has chosen to go for double and triple taps over a single tap as this means you’re less likely to accidentally activate commands when adjusting the buds in your ear.

The other upgrades Creative has made are to battery life and microphone quality. The buds now last up to 12 hours on a single charge, up from 10 hours on the original. Taking the charging case into account, the V2 deliver up to 34 hours audio playback, four hours more than the original Outlier Air. That’s an impressive figure, although it does fall short of the total 39 hours that the more expensive Outlier Air Gold deliver.

Without either the original Outlier Air or Air Gold to compare microphone quality with, I can’t comment on how significant an improvement has been made in that area, but I had no issues during phone calls. Those I spoke to reported that the single mics in each bud picked up my voice clearly without any distortion or echo and Qualcomm’s cVc 8, noise-cancelling technology did an admirable job at suppressing external sounds.

Creative Outlier Air V2 review: How do they sound?

The V2 use the same 5.6mm graphene drivers as the original Outlier Air and it’s hard to find fault with how they sound given their price. Audio is energetically communicated and there’s plenty of bass underpinning pleasingly crisp mids and trebles. Not one aspect of the sonic profile dominates, resulting in a balance that lends itself well to pretty much every musical genre.

The overall audio experience benefits tremendously from how well the V2’s eartips seal off your ear canals. Passive noise cancellation is right up there with some of the best headphones around, including those costing in excess of £200. This allows you to enjoy the richness of the V2’s full-bodied bass while still being able to pick up on the more granular details of a song’s arrangement. 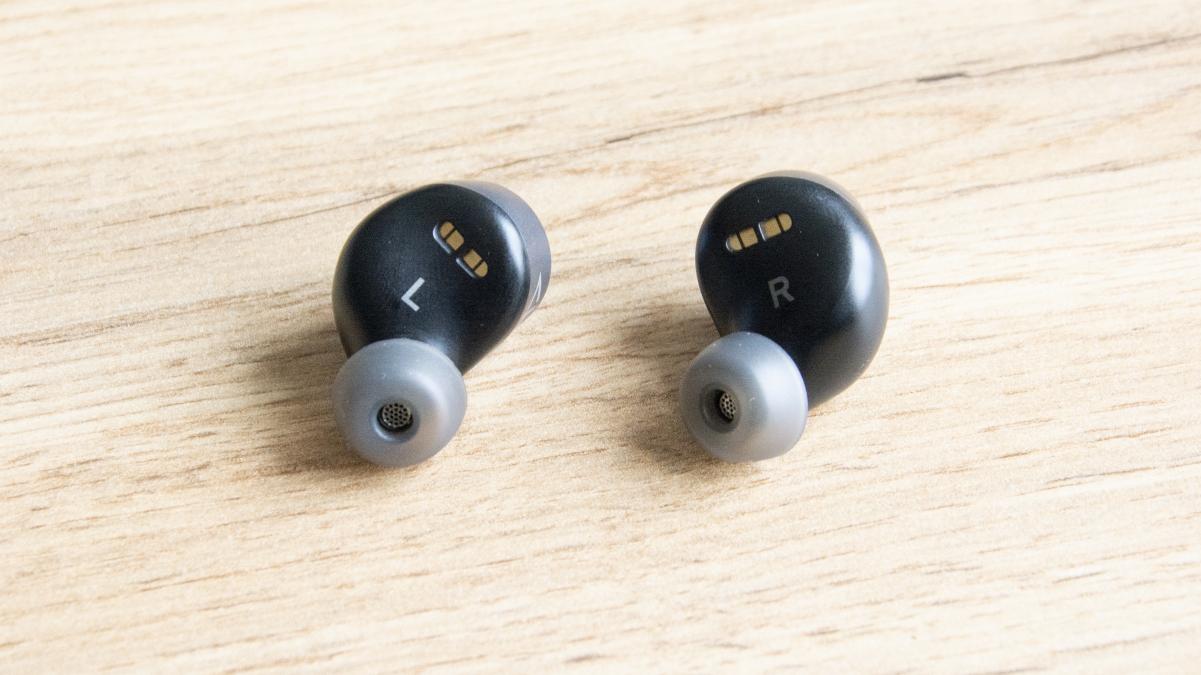 SXFI uses head- and ear-mapping to construct a personalised sound profile that feels like it’s coming from multiple speakers positioned around your head. Numerous Creative products utilise it, including the Creative SXFI Theater, which features on our Best wireless gaming headset list and the Creative SXFI Trio, our favourite wired headphones under £200.

Setting SXFI up is simple, although it does require the assistance of another person. Once you’ve downloaded the iOS or Android app you’ll need to get someone to take photos of your right ear, left ear and face so the technology can map your head in 3D. Once this has been done you’ll have your very own holographic audio profile ready to use.

Having used it before I knew what to expect but couldn’t help but be impressed by how well the tech works. The sense of space you get when it’s active is exceptional and you’re able to pinpoint different elements of songs extremely accurately.

Creative Outlier Air V2 review: What could they do better?

Having just sung the praises of SXFI I’m now the bearer of some bad news: it can only be used when listening to locally stored audio files through the SXFI app.

That’s not a big deal for those with extensive music libraries downloaded to their devices but those that favour streaming audio from Spotify, TIDAL or similar services will miss out. Given how good the Outlier Air V2 sound anyway, it’s not a dealbreaker but here’s hoping V3 will feature SXFI compatibility across the board. 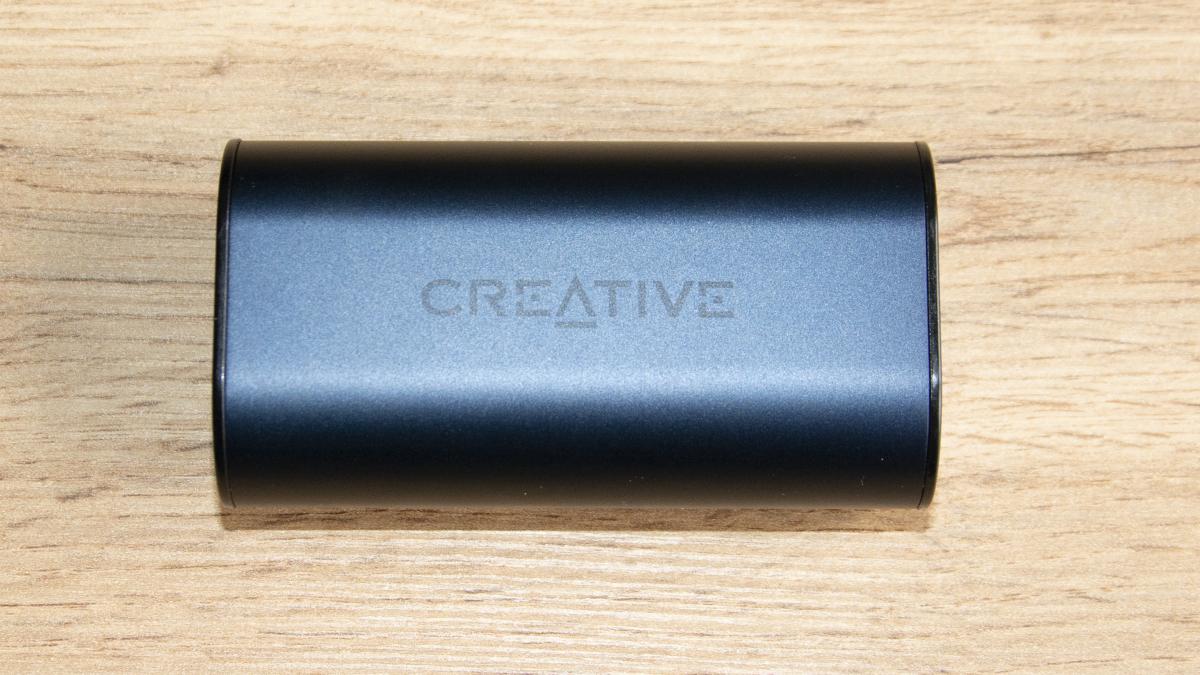 The Outlier Air V2 also lack one of the key features I’ve come to rely on when using true wireless earbuds: ear detection. The buds don’t automatically pause when you take them out of your ears so you either need to pause them manually or pop them straight back in the charging case.

On the subject of the charging case, the V2’s is rather chunky. It has a neat slide-out tray to house the buds but is over 8cm long and 4cm wide as a result, which some may find off-putting. A more petite case would be preferable but would likely come at the expense of reduced charging capacity, so it’s a case of picking your poison.

Creative Outlier Air V2 review: Should you buy them?

You’ll have probably guessed by now, but the answer is a resounding yes. The original Outlier Air were already excellent and Creative has improved them by adding intuitive touch controls and extending battery life.

They’re exceptional value for money at their RRP but are currently available for a frankly staggering promotional price of £60. At that kind of money, you just won’t find true wireless earbuds that sound as good, fit as comfortably or implement touch controls as effectively as the Outlier Air V2.

Don't miss a deal at Nike DE
Best offers at Virgin Media
Discounts, Sales and Deals at Myprotein
Save your money with House of Fraser
Online-Shopping with Udemy
Best products at Farfetch
Latest Posts