If you game on a PC in 2019, chances are you have a controller hooked up. Not for every game, or even most maybe, but there are certain genres where the beloved mouse-and-keyboard combo struggles. Racing games, platformers, and even the occasional third-person adventure benefit from analog sticks, a finesse and precision you can’t get with a keyboard switch.

Or can’t get from your average keyboard switch, anyway. Cooler Master’s MK850 is an interesting hybrid. Using what it calls “Aimpad” technology, the MK850 integrates analog sensors into the traditionally binary on/off keyboard switch. Lay terms? You can use the MK850 as a controller substitute—at least, in theory.

The reality? Let’s take a look.

Before we get into Aimpad, it’s worth noting that Cooler Master’s designed a relatively unique-looking keyboard in the MK850. No mean feat, in my opinion.

Two elements help the MK850 stand out. First off, it’s octagonal. Only slightly, mind you, but lopping the corners off certainly gives the MK850 a look. I can’t say it’s my favorite styling, especially where the keyboard and wrist rest meet. There’s a triangle of negative space at those intersections that just looks…weird. But it’s recognizable, at least. 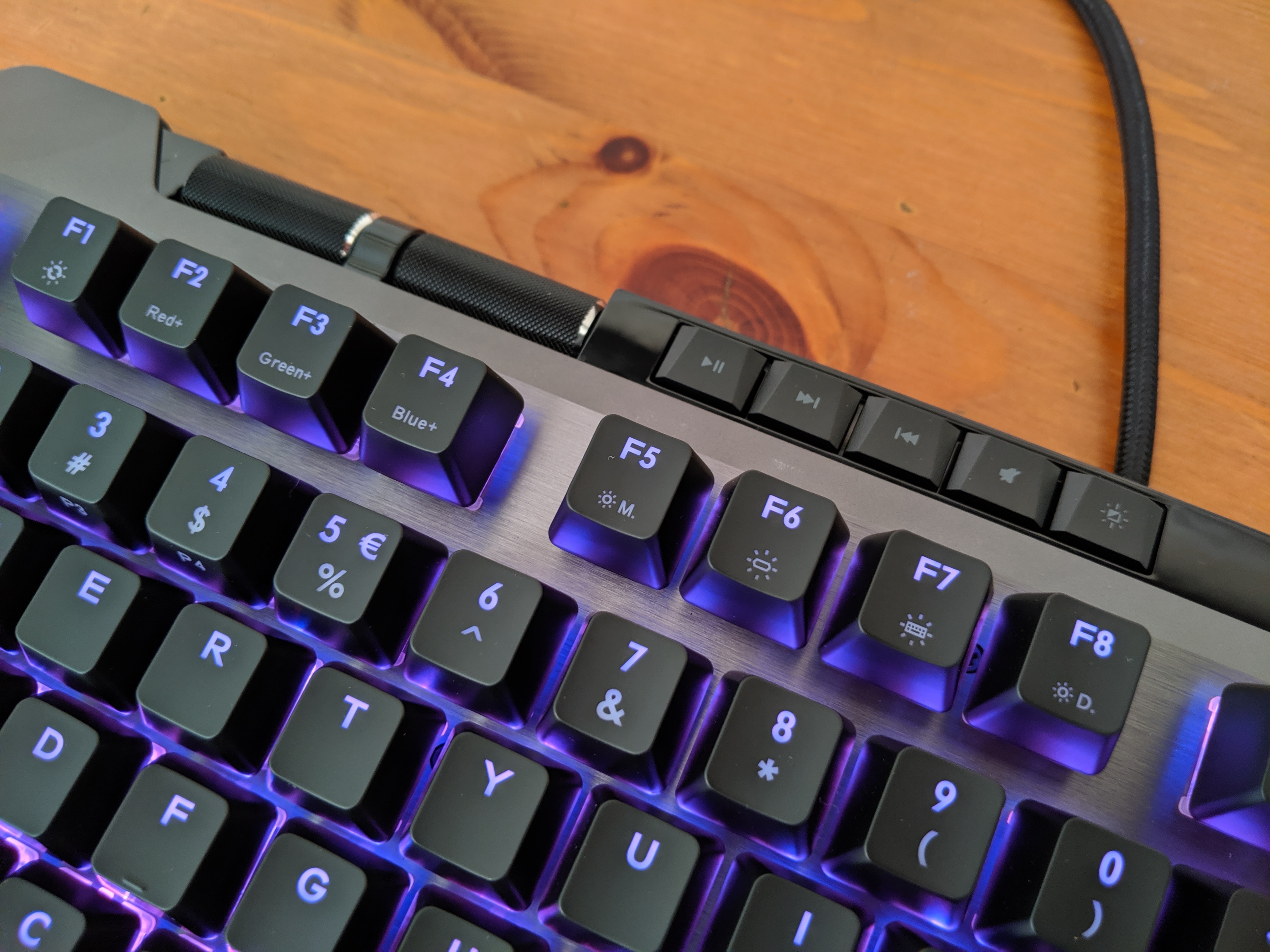 The other unique element: Not one but two volume rollers, and they’re arrayed in the middle of the keyboard instead of relegated to the right edge. I called them both volume rollers because that’s what I associate that style of wheel with, but only the right-hand roller deserves that label. The other controls the brightness of the MK850’s backlight by default.

It looks neat, though unfortunately panache comes at the expense of usability. Both the rollers and a set of standalone media keys are tucked down behind the keyboard’s Function row. It makes accessing them way more difficult than if they were in the standard top-right spot, which has more clearance—and is easier to find without looking, as well.

There are mechanical reasons for the change I think, which we’ll cover when we get to Aimpad. But if media keys are important to you, the best you can say about the MK850 is, “it has them.” That’s better than abstention perhaps, but only barely given how difficult it is to take advantage. 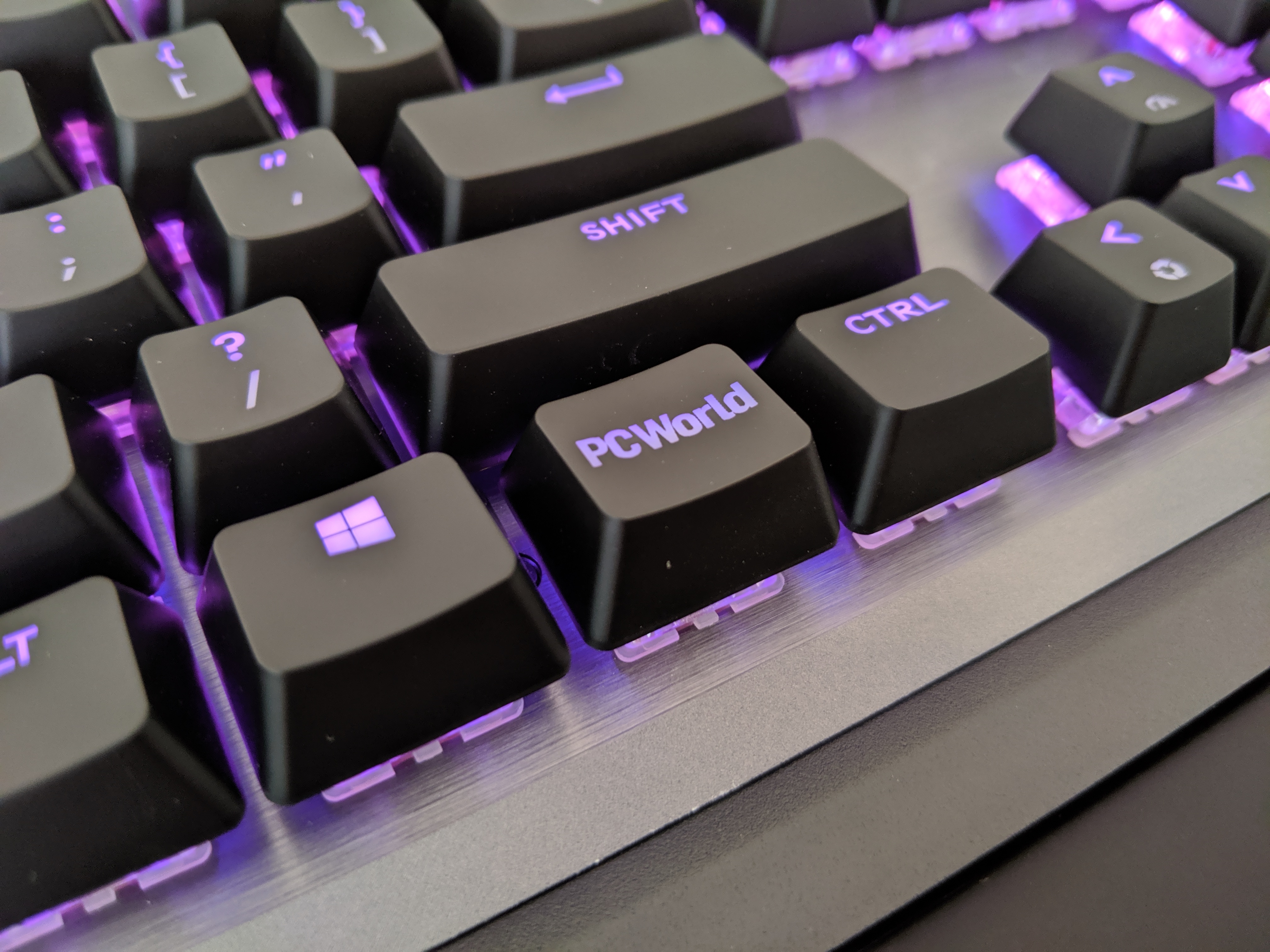 Still, the MK850 looks pretty decent sitting on a desk, even if somewhat oversized and overdesigned. I’m a big fan of the slim typeface Cooler Master uses on its keycaps, and the backlighting is bright and uniform. The wrist rest is fantastic as well. We’ve officially entered an era where every flagship keyboard ships with a plush leatherette-bound wrist rest, and I love it. (Kudos to Razer for starting this trend.)

But let’s get into Aimpad, because it’s the gimmick the MK850 is built around. It affects pretty much every facet of the keyboard, including the design.

Case in point: The reason the media keys are in the center is because the Aimpad controls take the top-right spot. There you’ll find three buttons. One toggles Aimpad on and off. The others increase and decrease the sensitivity of Aimpad, just as you would adjust the dead zones on analog sticks.

Because that’s the idea, really: Aimpad turns your WASD block into an analog stick. 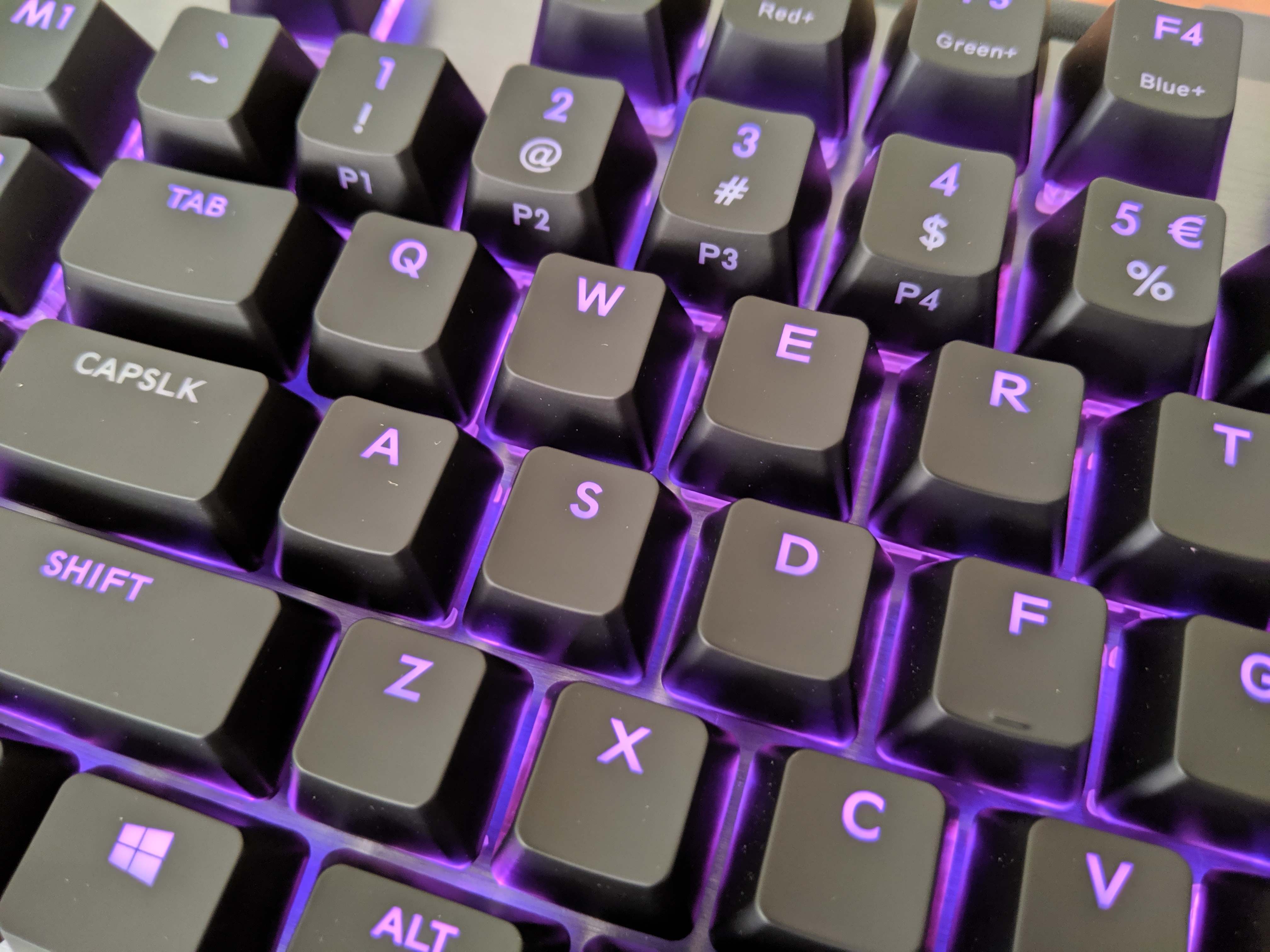 Problem is, it’s not nearly as simple in real life as it sounds on paper. Up to now, there’s been no crossover between gamepads and mouse-and-keyboard. Plenty of games can handle both, and many can seamlessly switch back and forth. Touch your mouse, the game knows you’re using a mouse. Touch your controller, it automatically switches.

The MK850 is both, though. On a technical level what’s happening is that a game reads mouse-and-keyboard inputs from your mouse and various non-analog keys like Ctrl and the Spacebar. Then it gets controller inputs from WASD.

As I said, plenty of games can handle both without a hitch. Most change the controls that display on-screen depending on your input device. Thus the “A” button on an Xbox controller might correspond to the “E” key on your keyboard. You don’t really notice or even need to know this usually, because you choose an input and stick to it.

But when you use Aimpad, the game constantly changes between the two. Use WASD to move and you’ll see Xbox controller prompts. Pan the camera with your mouse and it will switch back to mouse-and-keyboard. Do both, and try not to get distracted by the constant flickering as the interface desperately switches back and forth. 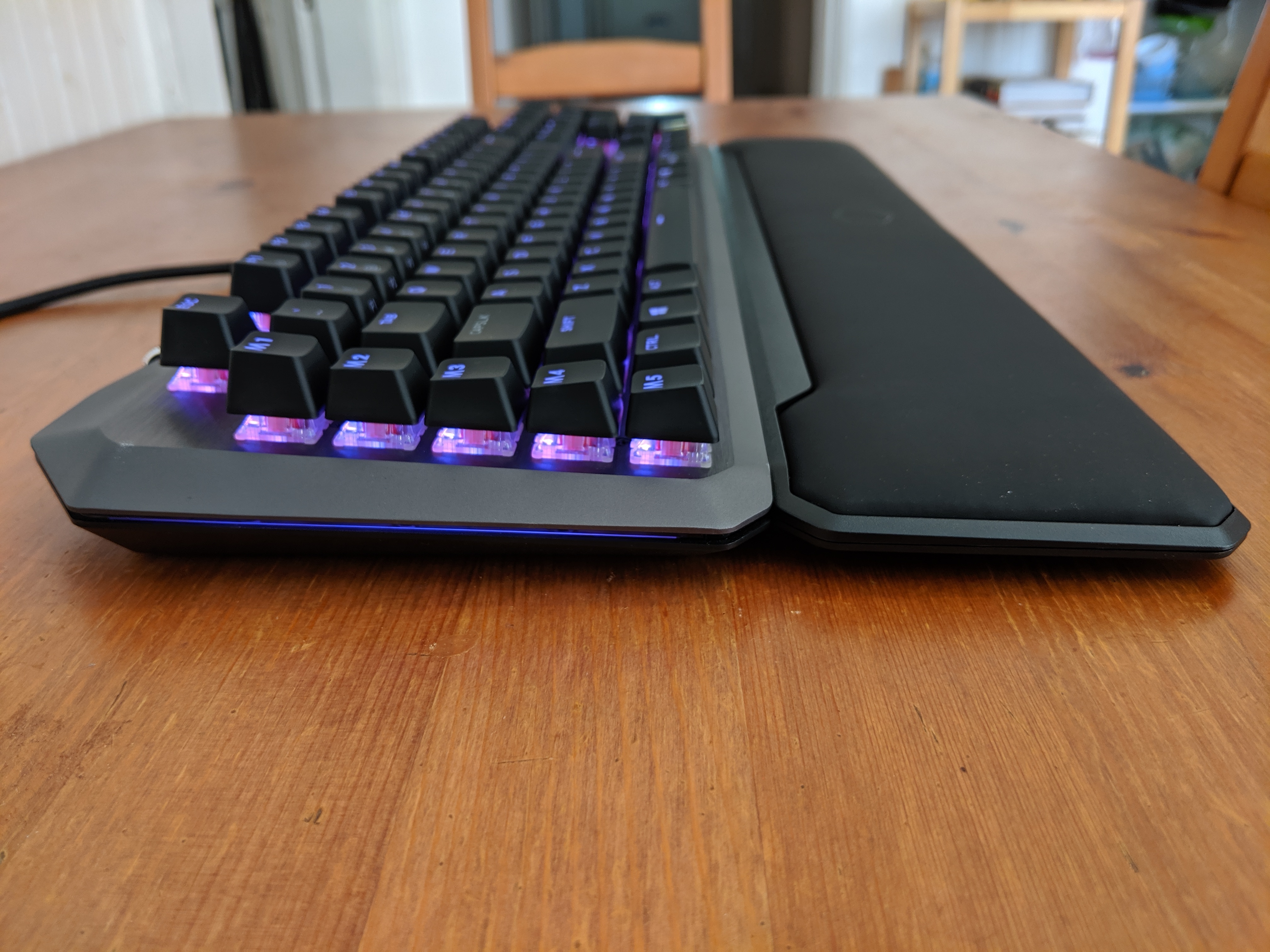 I’ve used Aimpad for a bunch of games now—some on Cooler Master’s “officially supported” list, others that I simply know have controller support, including Gears 5, Borderlands 3, Metro, Doom, Ghost Recon. Sure, the games are playable. Aimpad works as advertised, and it’s kind-of neat to half-depress the W key and watch my character walk. In a PC game. Without any modifier keys!

It’s a cool proof of concept, and if properly supported by developers I could see analog keyboard tech taking off. A proper controller and analog stick is still preferable for some games I think, but racing games and the like are way more playable on the MK850 than on standard keyboards.

At the moment it feels more like a hack than a proper technological leap, though. Games simply aren’t built to support this hybrid input system. Even games like Borderlands 3, where I know the controls by heart because they’re stock-standard shooter controls, the constant UI flickering was enough to get me to disable Aimpad eventually.

And that’s before we get into Aimpad’s weirdly high-maintenance setup. 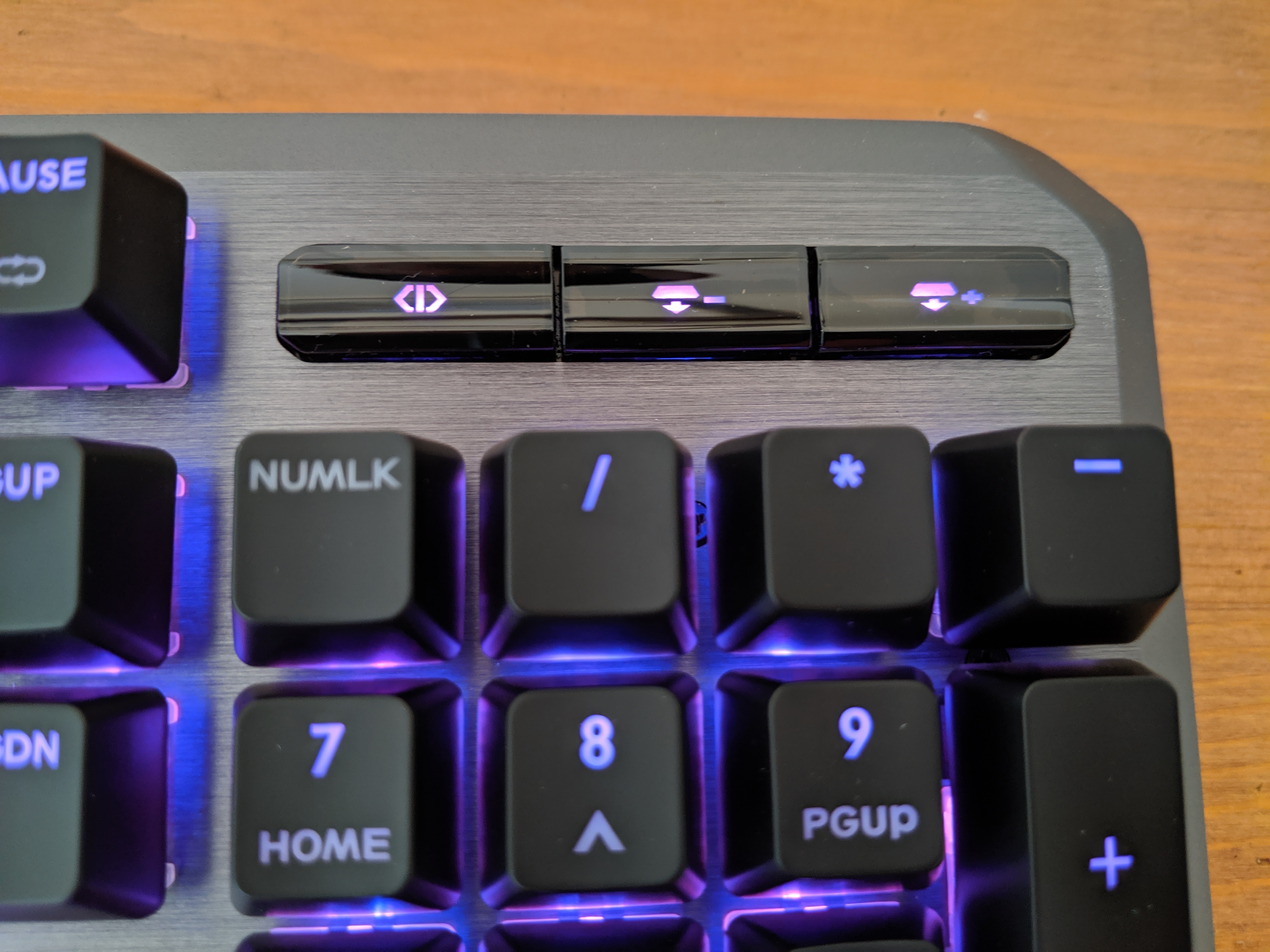 The MK850 ships with Aimpad disabled. Thus your first step out of the box is to hit the button in the top-right to turn it on. You then need to calibrate all eight keys—Q, W, E, R, A, S, D, and F—by holding down each key until a corresponding LED turns from green to red. Once all eight are calibrated, you’ll be in Aimpad mode.

Or…well, sort-of. As I said, games aren’t built to support Aimpad. Whenever it’s enabled? The corresponding keyboard inputs are disabled.

Put simply, if you’re using one of the Aimpad profiles you won’t be able to type using the aforementioned WASD block. The rest of your keyboard works as normal, but those keys don’t. Thus Cooler Master includes a profile without Aimpad functionality enabled so you can type.

Switching among various MK850 profiles is fairly easy. There are five slots mapped to the five macro keys arrayed down the left side. In the documentation M1 is for typing, the other four for various game genres. M2 for instance uses WASD as an analog stick, while M3 (for “racing”) maps right trigger and left trigger to W and D respectively. At some point the documentation also diverged from reality, so in actuality M5 is the default “Typing” profile now, though it’s easy enough to switch it back to M1. 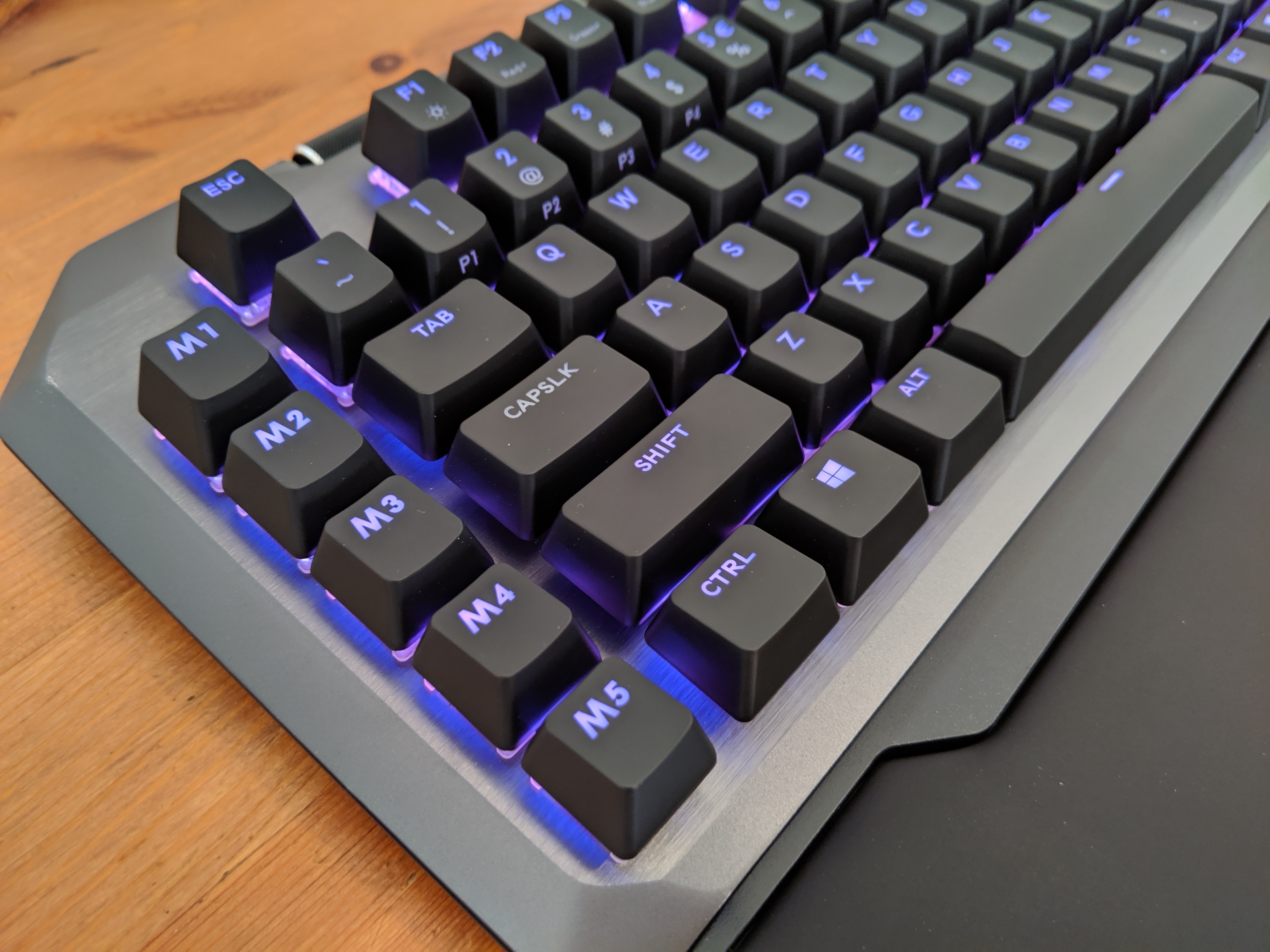 Regardless, it’s not hard to enable or disable Aimpad. You don’t need to go through that whole calibration routine again each time, so long as you just use the profiles to swap instead of turning off Aimpad entirely.

But again, it feels like a hack. I’ve found it frustrating, Alt-Tabbing out of a game to chat with friends only to realize midway through a message that eight keys are still disabled. Or rather: “I’v foun it utting.” You can’t even read that final word as “frustrating,” it’s so butchered. I’ve found it just as annoying going the other direction as well, trying to remember to turn my analog controls back on every time I launch a game. That’s not a great user experience.

There’s an aesthetic concern as well. In order for Aimpad to work, those eight keys need to have full LED brightness enabled. Or at least that’s what I assume is happening, because no matter what you set the rest of your keyboard to, that one block will always display bright white. It’s an ugly compromise.

Aimpad is an idea ahead of its time. There’s nothing but good intentions here, trying to close the divide between mouse-and-keyboard and controller. As someone who regularly uses both and thinks each excels in certain genres, I’m all for developing a device that integrates the best aspects of both.

Support simply isn’t there though, either at the operating system or the game level. The MK850 “works,” but only in the loosest fashion. It feels more like a CES tech demo than a proper, consumer-facing product. A fantastic tech demo, a very forward-thinking tech demo, but not necessarily one I want to put up with on a day-to-day basis. There are simply too many caveats to make the few advantages worthwhile.

Cooler Master’s Aimpad technology has a lot of promise, but at the moment it feels more like a tech demo than a fully realized product.

Don't miss a deal at Bodybuilding
Best offers at Argos
Discounts, Sales and Deals at Surfdome
Save your money with Myprotein
Online-Shopping with EE Mobile
Best products at Vodafone UK
Latest Posts