There’s much to like about the BenQ Mobiuz EX2510. All the main gaming features you’d want are present, like 144Hz, emulated HDR and a matte screen. It looks good and interacting with it is simple too.

The world of gaming monitors is far from commoditized, to the point where most models offer something different to everything else on the market. In the case of BenQ’s Mobiuz EX2510, its feature set places it somewhere around the top-end of the budget market and the bottom end of the mid-range market. So how does it stack up against 2020’s best gaming monitors and, who, if anyone, should buy it?

The BenQ EX2510 is available in the US, UK, Australia and other regions, at street prices of around $249 / £240 / AU$359 at the time of testing. That places it significantly higher than our favored and similarly specced ViewSonic XG2401 recommendation, but the latter doesn’t have HDR and is not available in all territories, such as Australia. 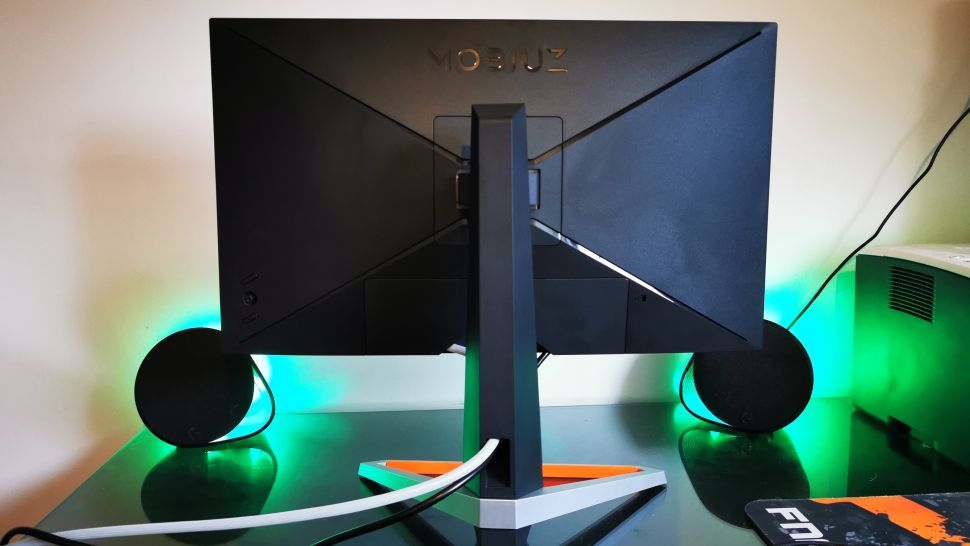 In terms of top-line specs, the EX2510 is a 24.5-inch, Full HD, IPS, 144Hz gaming monitor with ‘HDR’ technology. The Mobiuz is also much smarter-looking than most budget monitors (especially that aforementioned ViewSonic), thanks to a solid, classy stand, sharp lines, a colorful design flourish and a very thin bezel. The stand itself can be manipulated to generous degrees, offering -5°/+20° tilt, 20°/20° swivel and a height adjustment of 130mm. However, it rotates only to only a negligible degree – one that helps slightly with cable insertion but little else.

Those connections consist of two DisplayPort 1.2 sockets, an HDMI 2.0 port and a 3.5mm audio jack. They’re hidden behind a removable panel at the back and cables can be tidily channeled through a gap in the stand. Unsurprisingly for a monitor with this price tag, there are no RGB lights adorning it. 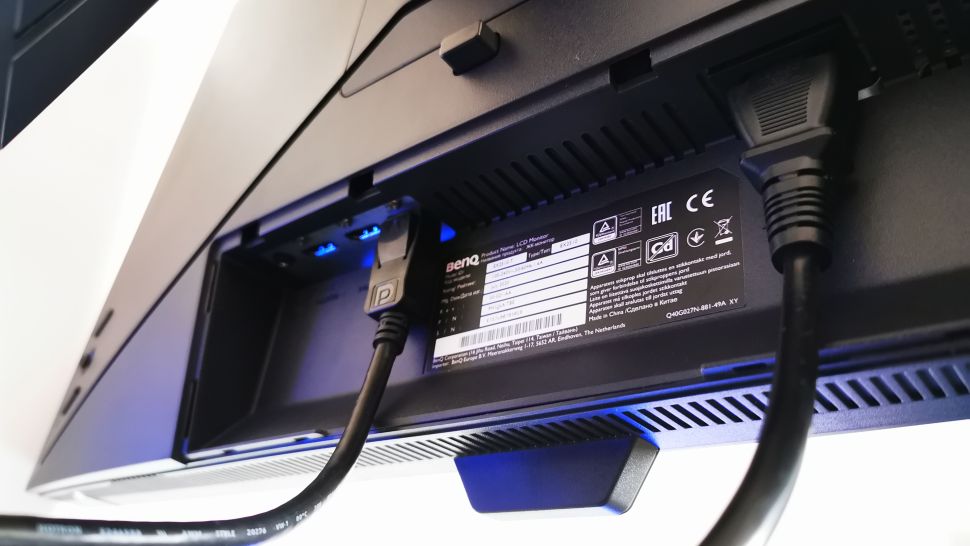 It houses two 2.5-watt speakers, which get surprisingly loud. They offer well-rounded audio too, which is great for casual YouTube videos and casual gaming. BenQ goes into some detail on how everything has been tailored for audiophiles by utilizing its in-house treVolo technology. However, playing music at any serious volume exposes their near-total lack of bass. Changing the equalizer from Pop/Live mode to Cinema mode merely muddies the lower frequencies, while Game mode removes them altogether – highlighting top-end, scratchy sounds of frequencies favored by approaching footsteps and gun-cocking sounds, helping battlefield awareness. Still, they’re significantly superior to most other built-in monitor speakers that we’ve ever used.

In theory, a headline feature that elevates the Mobiuz above many similarly-priced rivals is the incorporation of HDR. Not surprisingly, it can’t nearly match the stunning imagery of more expensive and premium 1,000-nit rivals, but BenQ’s emulated ‘HDRi’ system offers a little more than the usual, low-end, ‘high-contrast’ excuse for HDR that’s occasionally seen around this level of the market. In practice, a small button in the bottom right-hand corner of the screen cycles between HDR, Game, Cinema and Off modes. They all make the screen noticeably brighter and improve color vibrancy – just with slight variances in color temperature. 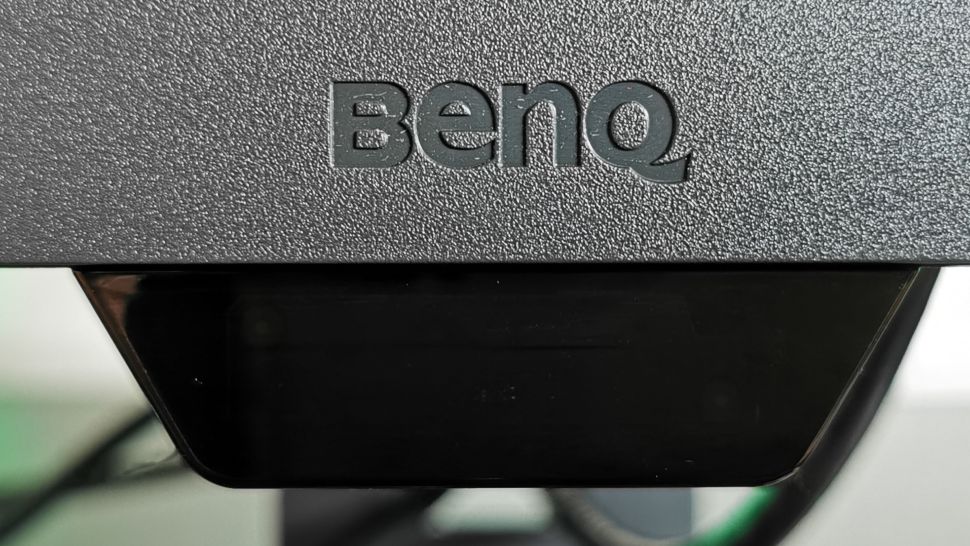 The Mobius EX2510 also has an ambient light sensor for dynamic image ‘improvement’ that it describes thus, “A discrete sensor detects ambient light levels and assesses then refines on-screen HDR images for ideal display… Dark corners show what they’re hiding while bright areas are not overexposed… color balance and saturation are adapted for a mind-blowing visual experience.” The discrete sensor is actually that large, front-and-center glossy box affixed to the base of the screen. When activated it will adjust brightness and color saturation depending on your environment. It effectively works as described, but some may find the small on-screen icon, which appears in the corner when the screen is being adjusted, a touch distracting. If you find it changing the screen’s brightness too often, you can adjust sensitivity in the OSD.

When gaming, the HDRi technology can combine with the IPS panel’s 1,000:1 contrast ratio and impressive 400-nit brightness to produce a pleasing picture. However, while we liked seeing sneaky blighters hiding in dark areas, it was rather easy for detail to get lost in bright skies and such like. It was still possible to produce impressive, near-black dark areas in cinematic situations, but IPS panels only get so dark and, consequently, true-black performance is off the table.

The screen is matte-finished rather than glossy. But while those unflattering ‘Black Mirror’ reflections are cut out, we felt it reflected more-than-usual ambient glare in a bright room. 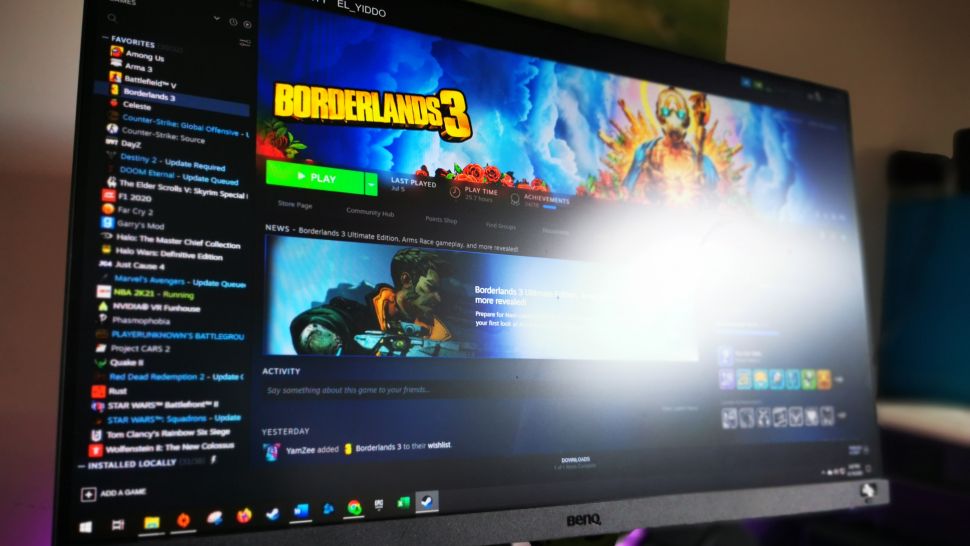 The 144Hz refresh rate keeps everything buttery smooth and there was minimal ghosting. Pixels have a low 1ms MPRT response time (Motion Picture Response Time standard) and are capable of 2ms grey-to grey flexing – very fast for an IPS panel. It’s all supposedly enhanced by an overdrive technology called Advanced Motion Accelerator but, in this reviewer’s experience, it did nothing noticeable beyond changing the setting number from one to three. Your mileage may vary. The monitor also supports FreeSync but, if you’re using an Nvidia graphics card, we discovered that if the refresh rate was set differently in Windows to the game, when framerates fluctuated significantly, it would literally turn the screen off for a few seconds on each occasion. It took us a while to figure that nightmarish bug out. Ensuring everything is set to 144Hz fixes the problem.

The OSD isn’t the most intuitive at first glance, however, we were quickly cycling through all the settings using the responsive, mini joystick at the back on the right (a button above this quickly cycles between inputs while the one beneath it turns the monitor off). It offers the standard range of image adjustment functions with some more-advanced options. The latter include a Black Equalizer adjustment in the FPS settings which adjusts the gamma to further reveal dark objects lurking in the shadows. You can also adjust light filters including blue light to comfort your eyes plus, you can adjust what appears in the quick menu settings when you first click the OSD button before entering the main menu.

Some gaming monitors can be hopeless at displaying a Windows Desktop: butchering the contrast and detail in office documents to the point where extensive messing around with settings is required just to see text in a document. Mercifully, the Mobius’ picture quality is also very well suited to office work. It makes a decent fist at high-quality video thanks to good color performance and contrast. However, there is some light leakage noticeable in the corners when letterbox bars are present and the ability to display true black is noticeably absent.

At $249 / £240 / AU$359 the BenQ Mobiuz EX2510 represents decent value and is a worthy choice at its level in the market. While many of the advertised features are somewhat gimmicky, it’s good at displaying gaming content and more besides. While its ability to display detail in bright areas isn’t great, only those who play very bright games should steer clear.

You want important gaming features without the fuss

If you’re playing fast-paced games the standard 60Hz monitors just aren’t going to cut it: you’ll be at a competitive disadvantage and frantic mouse movements can make you giddy. Once you try 144Hz for FPS games (especially) there’s no going back.

You want a stand that’s solid, adjustable and pretty

There are few more-dispiriting things than staring at an ugly hunk of plastic for hours on end: one that’s balanced on a bunch of boxes and books in a desperate attempt to stave off neck strain, to boot. The Mobiuz has classy lines, doesn’t look cheap and can be adjusted a great deal.

You’re fed up of enemies jumping out of shadows

The Mobius has many settings that allow you to stop shadowy objects jumping out of the dark. It might spoil a lifelike picture but that’s competitive gaming for you: many of your competitors will be doing similar and gaining an edge over you if you don’t reciprocate.

When you play games on a super-premium gaming monitor with top-quality HDR technology, it appears as though lights are shining out of the screen: the picture can be jaw dropping. While the emulated HDRi technology of the mobius is better than normal, it’s ultimately a high contrast setting.

You want a screen that rotates

There are many ergonomic options afforded by the Mobius’ stand, but rotating isn’t one of them. If you ever like to work in portrait mode, make another choice: this monitor only rotates a few millimeters to facilitate the wrestling that goes on with signal cable insertion.

You play games with many bright scenes

The emulated HDR is good at displaying a wide dynamic range with enriched colors, but in bright areas, you’ll struggle to see details without serious manipulation of the image settings.

Don't miss a deal at Currys
Best offers at O2 Mobile
Discounts, Sales and Deals at House of Fraser
Save your money with Myprotein
Online-Shopping with Groupon
Best products at Go Daddy
Latest Posts