Android tablet makers have struggled for years to topple the unrelenting might of Apple’s ever-popular iPad lineup. From Huawei to Acer, many Android alternatives aren’t much more than characterless iPad copycats, and they’ve failed to make even the smallest dent on Apple’s sky-high sales so far.

Things might be looking up for Android, however, with the arrival of the Samsung Galaxy Tab S7 Plus. Launching alongside the Galaxy Note 20, Galaxy Watch 3 and Galaxy Buds Live, Samsung’s latest high-end Android tablet is quite impressive, and even manages to beat Apple to the starting line when it comes to 5G connectivity.

Samsung Galaxy Tab S7 Plus review: What you need to know

The Galaxy Tab S7 is clearly intended as a direct competitor to the recently refreshed iPad Pro (2020). Just like the iPad, it comes in two different screen sizes depending on how much you’re willing to spend. The S7 Plus has a 12.4in display and the regular S7 has an 11in screen. There’s around a £100 price gap between the two. 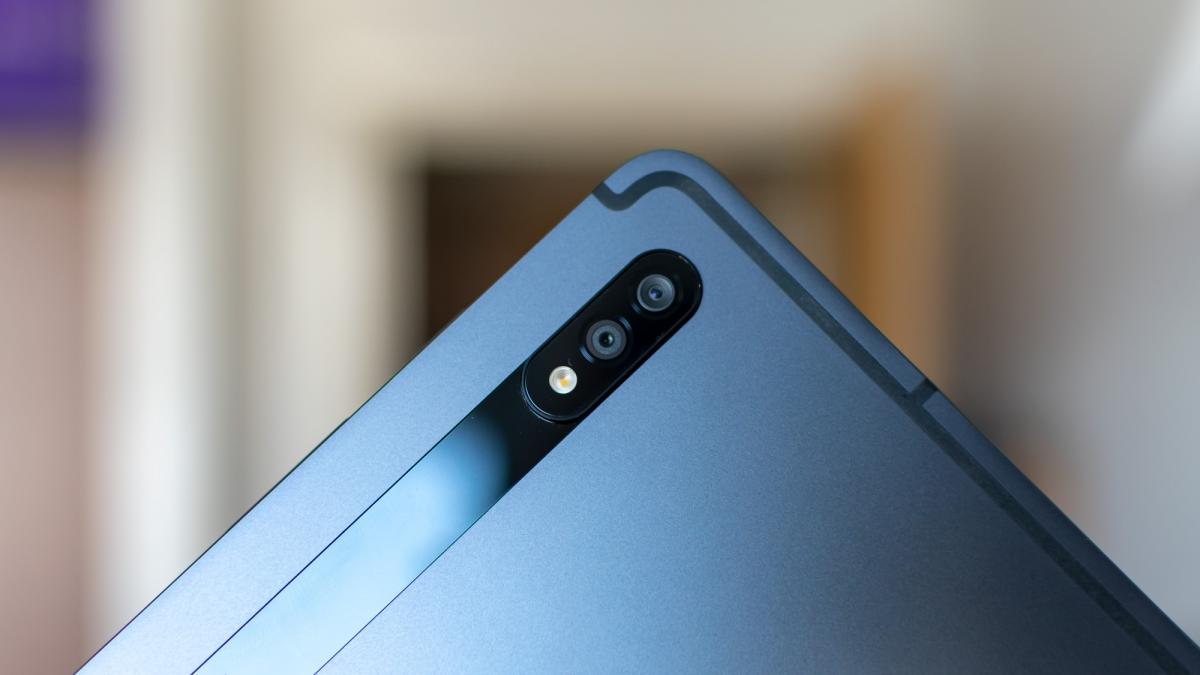 This review is for the Samsung Galaxy Tab S7 Plus, which not only has a larger screen but also has a bigger 10,090mAh battery and is the only model with the potential for 5G connectivity, something the iPad Pro doesn’t offer. The cellular version costs extra, of course, but I’ll get to that discussion in a bit.

Elsewhere, the Tab S7 Plus has a number of other advantages against the iPad. It also comes with a bundled stylus and the tablet can be used in DeX mode, a desktop-like user interface that transforms the Tab S7 Plus into a makeshift laptop.

The Wi-Fi-only version of the Tab S7 Plus costs £799 and comes with 128GB of storage, which can be expanded via microSD up to a further 1TB. The 5G LTE variant costs £999.

Compare these prices with the iPad Pro (2020), and Samsung finds itself in a remarkably strong position. The entry-level 11in iPad Pro starts at £769, while the 12.9in variant costs £969. Neither Apple tablets come with 5G, with the 4G LTE versions costing £919 and £1,119 respectively, neither has storage expansion and neither includes a stylus in the box like the Tab S7 does.

The iPad Pro isn’t the Tab S7 Plus’ sole rival, of course, but other tablets aren’t quite in the same league. The Huawei MatePad Pro, for instance, while technically capable with an impressive specs list, doesn’t run the fully supported version of Android, and thus lacks Google applications such as YouTube, Drive, Gmail and others.

As for looks, the design hasn’t changed much with the Tab S7 Plus since the Tab S6. It has a large screen, skinny bezels, flat sides and feels surprisingly lightweight, despite its rather monstrous physical dimensions (285 x 185 x 5.7mm). The Tab S7 Plus can be picked up in a choice of three colours: “Mystic Bronze”, “Mystic Black” and “Mystic Silver”. 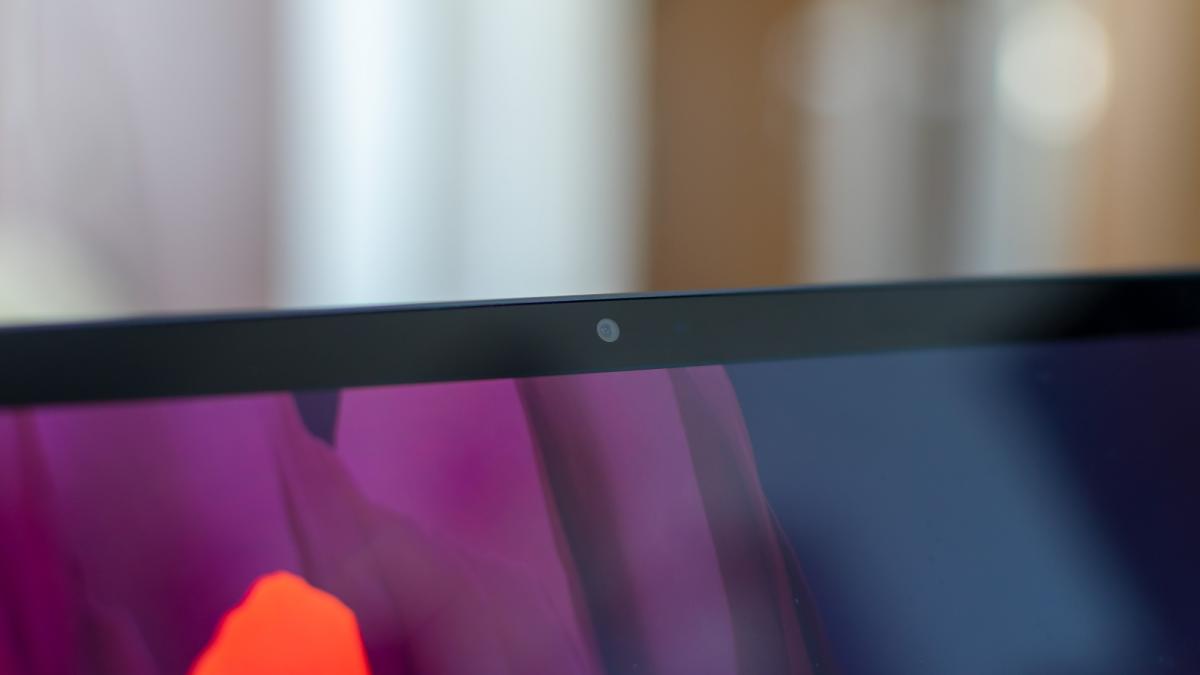 There is, however, one quite visible difference between this model and the Tab S6. The selfie camera, which can also be used for unlocking with your face, is now situated on one of the tablet’s long edges. This makes sense when you consider that Samsung is trying to position the Tab S7 as a quasi-laptop for working on the go.

Speaking of which, if you’re hoping to use the Tab S7 like a conventional laptop, then there’s also an optional two-part keyboard cover available to buy. The first part comprises a cover that magnetically snaps to the back of the tablet. This has an integrated kickstand and a smooth hinge that allows you to angle the tablet up to almost 180-degrees plus a handy slot to neatly store the S Pen stylus. The keyboard part simply attaches to the magnetic three-pin connector on the tablet’s bottom edge, includes a touchpad and doubles up as a protective cover for the screen.

It’s a very comfortable keyboard to type on. I’ve been tapping away on it while writing this review, and each key has a decent amount of travel and good feedback. The spacing between each letter is just right, too. You’re probably not going to get up to your full touch-typing speed on it straight away but you won’t be making loads of mistakes from the get-go either. You have to pay £190 for this new keyboard, though, which is a bit disappointing. 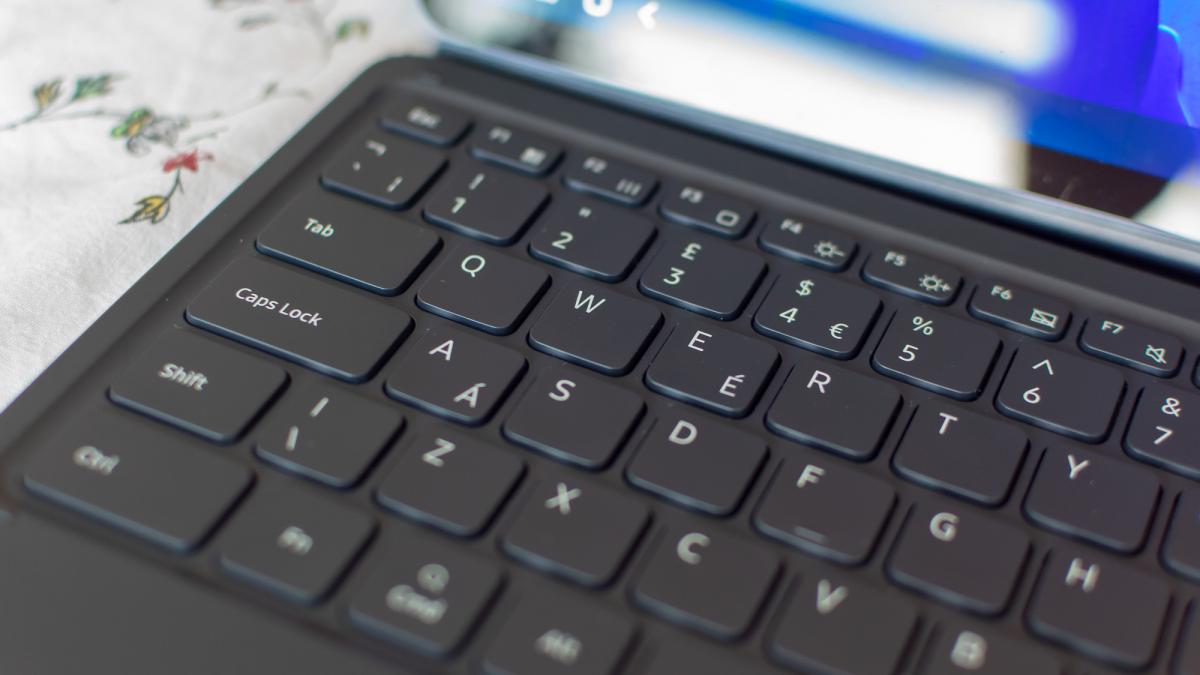 What you do get for free, however, is DeX mode, a desktop-style interface that’s designed to work with a keyboard and mouse and can even be displayed on an external monitor. The latter can now be done wirelessly if you happen to have a TV or monitor that supports screen-mirroring.

DeX mode automatically activates when you connect the keyboard cover, or it can be manually enabled by pulling down the notification drawer and tapping the DeX icon.

In DeX mode, you can use your tablet (almost) like a fully fledged laptop, with the ability to open multiple windows at once, drag and drop, and right-click for context-sensitive options. I liked that you can easily access an on-screen keyboard with a simple tap of the taskbar icon, and I was particularly impressed with how DeX managed incoming notifications – they neatly appear in the bottom-right corner of the screen, just like they would in Windows 10. 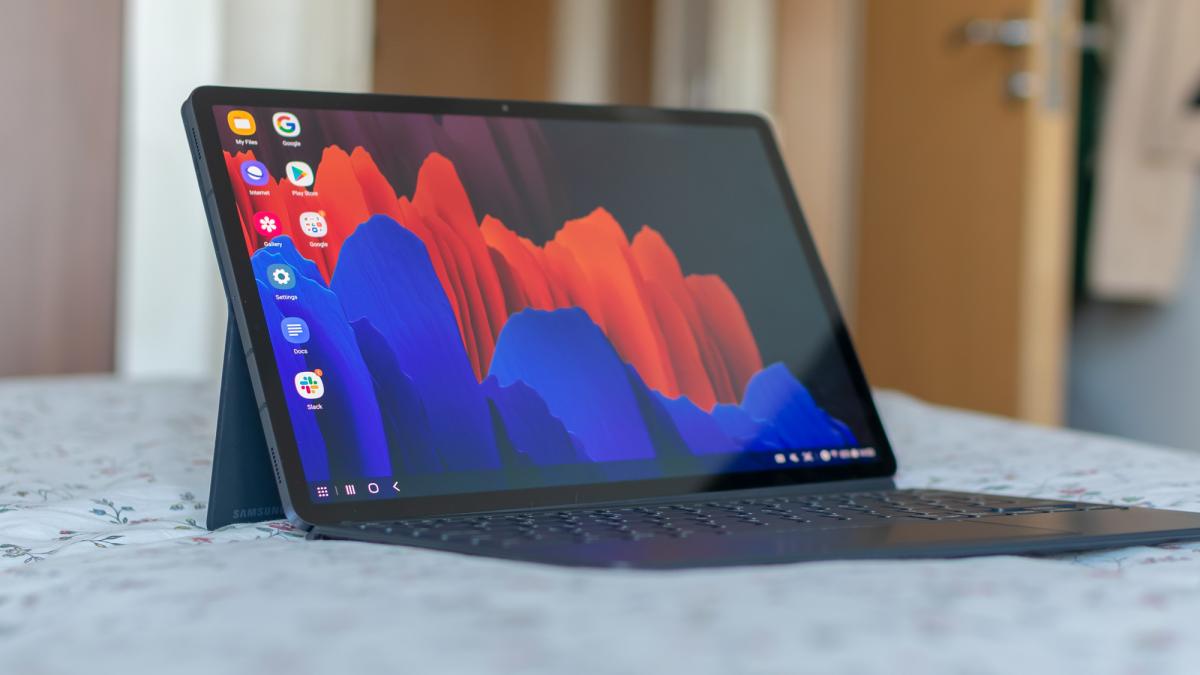 The Tab S7 Plus isn’t just a work machine, however, as it’s also one of the first mobile devices to support Microsoft’s Project xCloud game-streaming service. The service isn’t live just yet, so I haven’t been able to test it out for the purposes of this review but so long as you have an Xbox Game Pass Ultimate subscription (£11/mth), then as long as you have a strong enough internet connection, you’ll be able to stream and play over 100 Xbox games straight to the tablet.

As for the included S Pen stylus, not much has changed when it comes to the design, but the writing latency has been improved thanks to the new high-refresh screen. Pressure and tilt sensitivity work well, and I can only imagine this would be a useful tool for the more artistically inclined. It’s still bundled at no extra cost, too, which is nice when the 2nd-gen Apple Pencil costs an extra £119 to add to the already pricey iPad Pro. 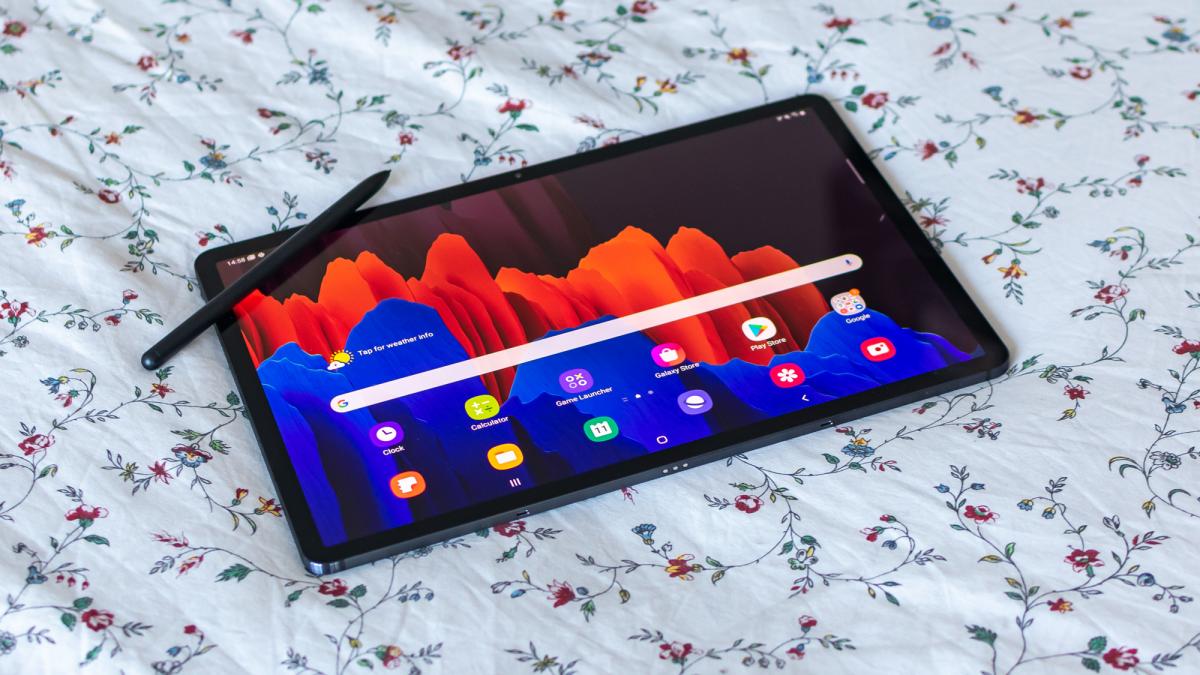 It’s worth mentioning that the screen on the 2020 iPad Pro is also technically capable of reaching up to 120Hz but this is an automatic setting that changes depending on whether the app supports it or not. With the Tab S7 Plus, you’re able to toggle between 120Hz or 60Hz whenever you wish.

The Samsung Galaxy Tab S7 Plus gives you two colour profiles to choose from, “Natural” and “Vivid”: both deliver delightfully rich, bold colours, no matter the viewing angle. In testing, I found that the most colour accurate of the two (compared with sRGB) was the “Natural” mode with a measured average Delta E of 2 (the lower the better). In this mode, the Tab S7 Plus covered 93.5% of the sRGB colour space, with a total volume of 94.5%, and brightness peaked at 367cd/m².

Powering the Tab S7 Plus is the Qualcomm Snapdragon 865 Plus, which is strange considering Samsung could have used its own Exynos 990 chipset and saved a few quid in the manufacturing process. Still, this is a welcome move on Samsung’s part, since the Snapdragon 865 Plus is actually a slightly more powerful CPU. 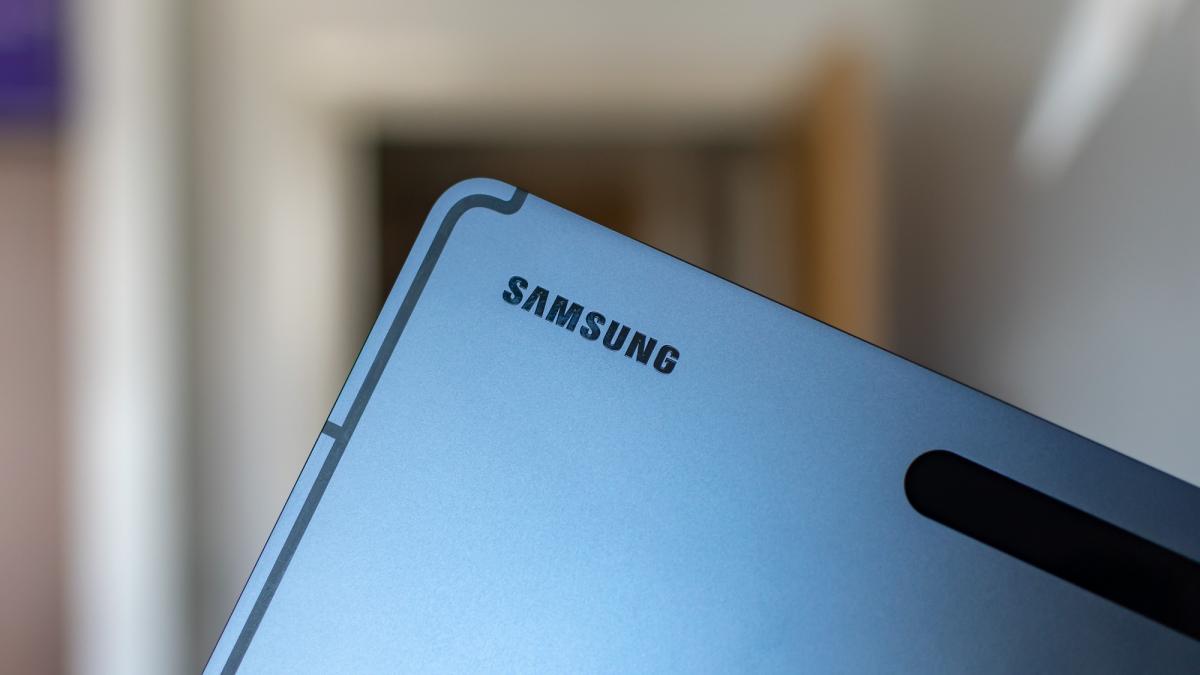 And it performed exceptionally well in our tests. In the Geekbench 5 CPU benchmark, the Tab S7 Plus achieved a single-core result of 965, and a multi-core score of 2814, which is twice as fast in multi-core processing than my current work laptop, a 2016 MacBook Pro with a 3.1GHz dual-core Intel Core i5 7267U.

Considering my faithful MacBook Pro hasn’t failed me yet, I can’t imagine the Tab S7 Plus will cause much frustration in the processing department. Sure, with it being Android you’re slightly more restricted with the type of apps you can run but whatever you do decide to throw at it, the Tab S7 Plus will just about shrug anything off without breaking a sweat.

As for the rest of the internals, the Galaxy Tab S7 Plus comes with 8GB of RAM and a beefier 10,090mAh battery. This lasted 11hrs 5mins in our standardised video rundown test, which is a 36% decrease on the Tab S6’s (15hrs 6mins) but the battery should last a full work day without needing to be charged. If you’re away from a wall socket for a longer stretch of time, you can squeeze out an extra 22% of juice if you dial the screen refresh rate down to 60Hz.

Both Tab S7 models also come with a microSD slot, which can take cards up to 1TB in capacity. Both tablets come with 13MP and 5MP (wide-angle) cameras and an 8MP selfie snapper, which work well in a pinch, and they both support Wi-Fi 6 as well as the aforementioned 5G capability.

In the end, whichever variant of the Samsung Galaxy Tab S7 you go for, you’re going to get an absolute belter of a tablet. The keyboard cover is nice (if you buy one), the tablet itself is lovely, DeX mode works well and the stylus is included in the box at no extra cost.

Pair all that with the fastest Qualcomm processor to date, a slick 120Hz screen and the potential for 5G connectivity, and the Tab S7 Plus is a great tablet for everything from working on Word documents to watching Netflix. And the price, which is considerably less than the equivalent Apple iPad Pro, makes for an exceedingly tempting purchase.

Previous ArticleIntel Ice Lake release date, news and features
Next ArticleWe’ve got a first look at Honor’s new smartwatch, with a hint at its features
Comments (0)

Don't miss a deal at Vodafone UK
Best offers at Bodybuilding
Discounts, Sales and Deals at Newegg
Save your money with Surfdome
Online-Shopping with Nike DE
Best products at Go Daddy
Latest Posts