The Samsung Galaxy S20 FE undercuts the S20 on price but with similar specifications, where are the cutbacks?

The end of 2020 might (finally) be upon us but Samsung’s never-ending launch strategy continues at pace. The Samsung Galaxy S20 FE is, however, a bit different from the 11 we’ve reviewed previously.

Unveiled during Samsung’s “Unpacked for every fan” event on 23 September, the Galaxy S20 FE is a cheaper alternative to the rest of the S20 range, delivering mostly similar specifications with only a few cutbacks.

The big question, however, is whether the arrival of the S20 FE softens the appeal of the regular Galaxy S20. With the option to pay less with minimal sacrifice when it comes to important features, why would you pay more?

Samsung Galaxy S20 FE review: What you need to know

Before we dive into specifics, it’s worth mentioning that the FE stands for “Fan Edition” and not “Flippin’ ‘eck”. Samsung says this new name is used to distinguish the S20 FE from the rest of the lineup, since it specifically includes “fan-favourite features” for a cheaper price.

With that issue addressed, what is it that makes the S20 FE a better value proposition than the S20, S20 Plus and S20 Ultra? Despite costing less, the Samsung Galaxy S20 FE has more in common than not: it shares Samsung’s top-end Exynos 990 CPU (or the Snapdragon 865 in the 5G model), includes a 120Hz screen and runs Android 10. 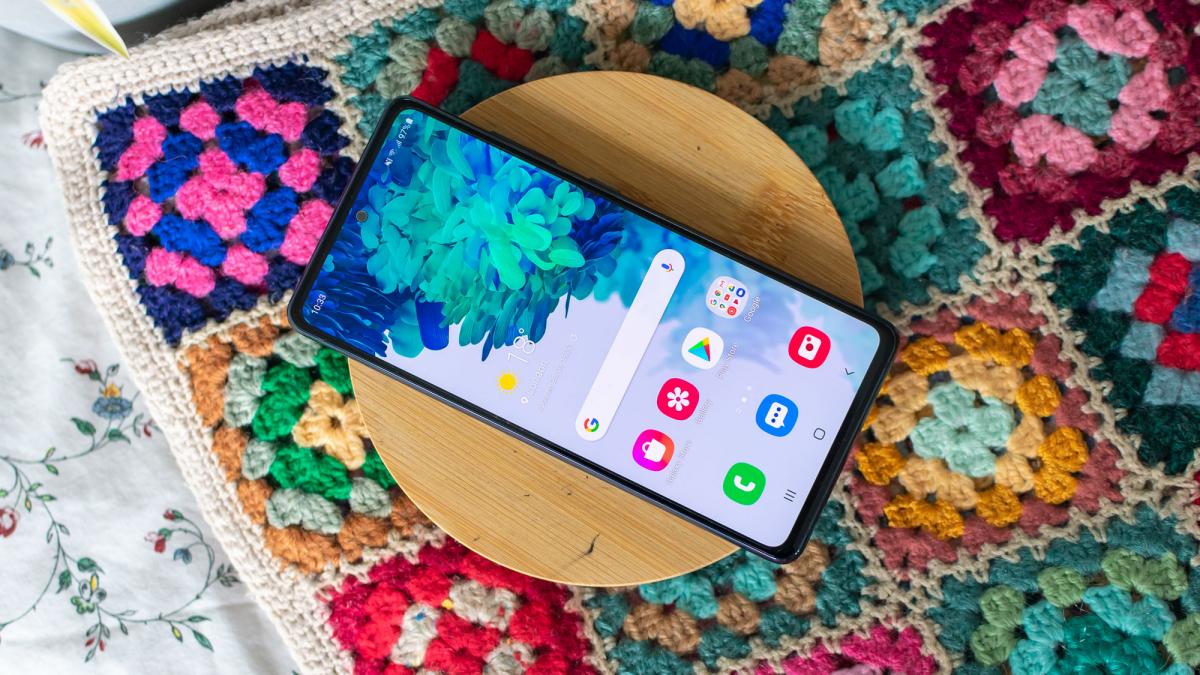 As for the differences, the S20 FE has a plastic design and, although it has the same number of cameras on the rear (three), it lacks the 64MP telephoto zoom as well as the ability to record 8K video. Its 6.5in Super AMOLED screen is also lower in resolution (FHD+) and it has 6GB of LPDDR5 RAM to the Galaxy S20’s 12GB. 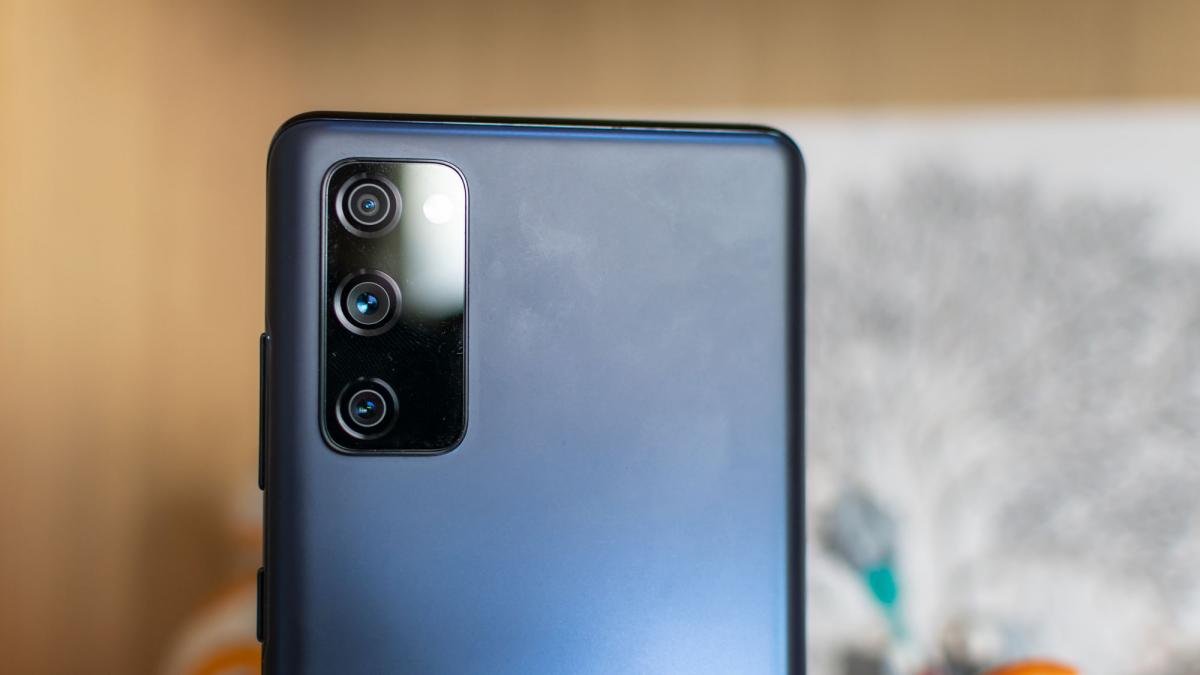 It isn’t the cheapest handset in Samsung’s arsenal, though. We’ve also reviewed a handful of budget Galaxy smartphones in recent months, with notable releases such as the Galaxy M31 (£245) and Galaxy A21s (£149) earning high praise.

Arguably its biggest competitor, however, comes from Apple. Starting at £729, the iPhone 11 isn’t quite as appealing, however, with a smaller, lower-resolution display, dual cameras and 64GB of non-expandable storage.

At first glance, there isn’t much difference between the Samsung Galaxy S20 FE and the regular S20 when it comes to design. The S20 FE retains the rectangular camera housing on the back and it looks familiar from the front as well with a neat pinhole selfie camera located centrally near the top edge of its mostly bezel-free 6.5in display.

Pick the phone up, though, and it’s immediately clear that something has changed. In an attempt to keep manufacturing costs to a minimum, the Galaxy S20 FE has ditched the aluminium/glass combo of the original in favour of a cheaper plastic build. A chief benefit of a plastic construction, of course, is that the phone is quite light – it’s only 190g – but there’s no denying that the S20 FE feels less premium than the rest of the S20 range. 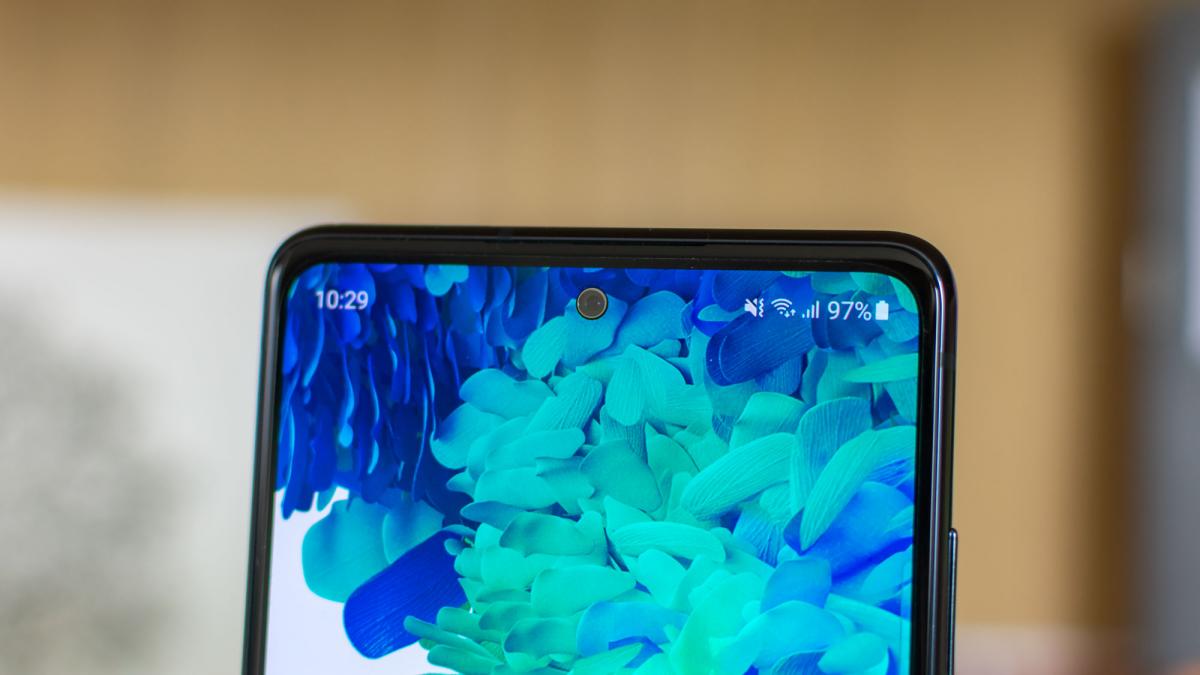 Thankfully, that’s the only major change when it comes to design and features. The Galaxy S20 FE still supports wired 25W charging via USB-C, although yet again Samsung isn’t supplying a 25W charger in the box. The phone also supports 15W wireless charging, is IP68 rated for dust and water ingress protection, has an in-display fingerprint sensor and comes in a wider range of colours: ‘Cloud Navy’, ‘Cloud Red’, ‘Cloud Lavender’, ‘Cloud Mint’, ‘Cloud White’ and ‘Cloud Orange’.

As for the display, the Samsung Galaxy S20 FE’s Super AMOLED screen retains the buttery-smooth refresh rate of 120Hz, although the resolution is lowered slightly to FHD+ (2,400 x 1,080). The screen is actually bigger on the S20 FE, however, measuring 6.5in across the diagonal compared to the S20’s 6.2in.

It’s not just large, it’s also a technically capable display. In our tests, the Galaxy S20 FE’s panel covered 93% of the sRGB colour gamut, with a total coverage of 97% in the phone’s ‘Natural’ display setting. On a general note, colours looked as they should, with only a few inconsistencies with some dark red, brown and green tones. An average Delta E (colour accuracy) of 2.01 is better than the 2.64 of the regular S20, too.

Maximum brightness is superb, too, peaking at 722cd/m2 with the automatic brightness setting engaged. On that note, HDR content on Netflix and Amazon Prime Video looks exceptional, too, with dazzling specular highlights and noticeably prominent darker tones.

Depending on which model you decide to buy in the UK, the Galaxy S20 FE is powered by either the Exynos 990 (4G) or Snapdragon 865 (5G). Both chipsets can also be found in the Galaxy S20 as well as the more recent Note 20 (conditional on your region) and there are some slight architectural differences between the two.

Samsung sent us the 5G variant of the S20 FE for this review, which means we can finally judge whether or not non-UK Samsung owners have been getting the better end of the deal until now.

In order to directly compare CPU performance, we put the S20 (Exynos 990) and S20 FE 5G (Snapdragon 865) against each other using the Geekbench 5 test on the Google Play Store. This rigorous benchmark tests the single- and multi-core performance of each chipset, displaying separate scores at the end, which helps judge which CPU comes out on top when it comes to raw speeds.

So, how did the two phones fare? As it turns out, single-core performance is largely similar between the two chipsets, but the multi-core result highlights a serious advantage for the Snapdragon 865. With a final score of 3,167, compared with the Exynos 990’s 2,779, the S20 FE 5G is roughly 18% faster with regards to multi-core processing.

This doesn’t mean much when it comes to real-world performance, though. I’ve been using a Note 20 Ultra (with an Exynos 990) as my daily driver for the last month or so and I haven’t noticed any performance issues. Both phones are blisteringly fast to boot-up, whizz across the user interface without any stuttering (even at 120Hz) and neither grinds to a halt when running CPU-heavy applications such as Adobe Lightroom and Xbox Game Pass.

Speaking of which, the two phones are closer in performance when it comes to graphics processing. In the GFXBench Manhattan 3 offscreen test it was a dead heat between the S20 FE and S20, with the phones producing off-screen results of 129fps and 122fps, respectively.

Elsewhere, the Galaxy S20 FE’s battery is the same size as the beefy 4,500mAh capacity unit found inside the £1,179 Note 20 Ultra. However, due to its smaller, lower-resolution screen, the Galaxy S20 FE is the clear winner where stamina is concerned.

In our video rundown test, the Samsung Galaxy S20 FE lasted for 20hrs 39mins before battery levels dropped to zero, which is 11% longer when compared against the Galaxy S20’s FHD+ score and a whopping 30% longer than the Note 20 Ultra.

Shifting the focus to the cameras before we wrap things up, the Galaxy S20 FE has seen a slight downgrade in this department. The S20 FE lacks the S20’s 8K video recording capabilities as well as the 64MP telephoto camera.

These are two niche features, of course, and it isn’t that much of a step down in any case. The triple-camera array on the back still consists of a 12MP (f/1.8) primary camera, 12MP (f/2.2) wide-angle unit and an 8MP (f/2.4) 3x telephoto zoom sensor. The S20 FE also shares the S20’s hybrid optical and digital ‘Space Zoom’ that magnifies a scene by up to 30x, as well as the ‘Single Take’ shooting mode, which allows you to capture up to 10 different photos and 4 videos whenever you press the shutter button. 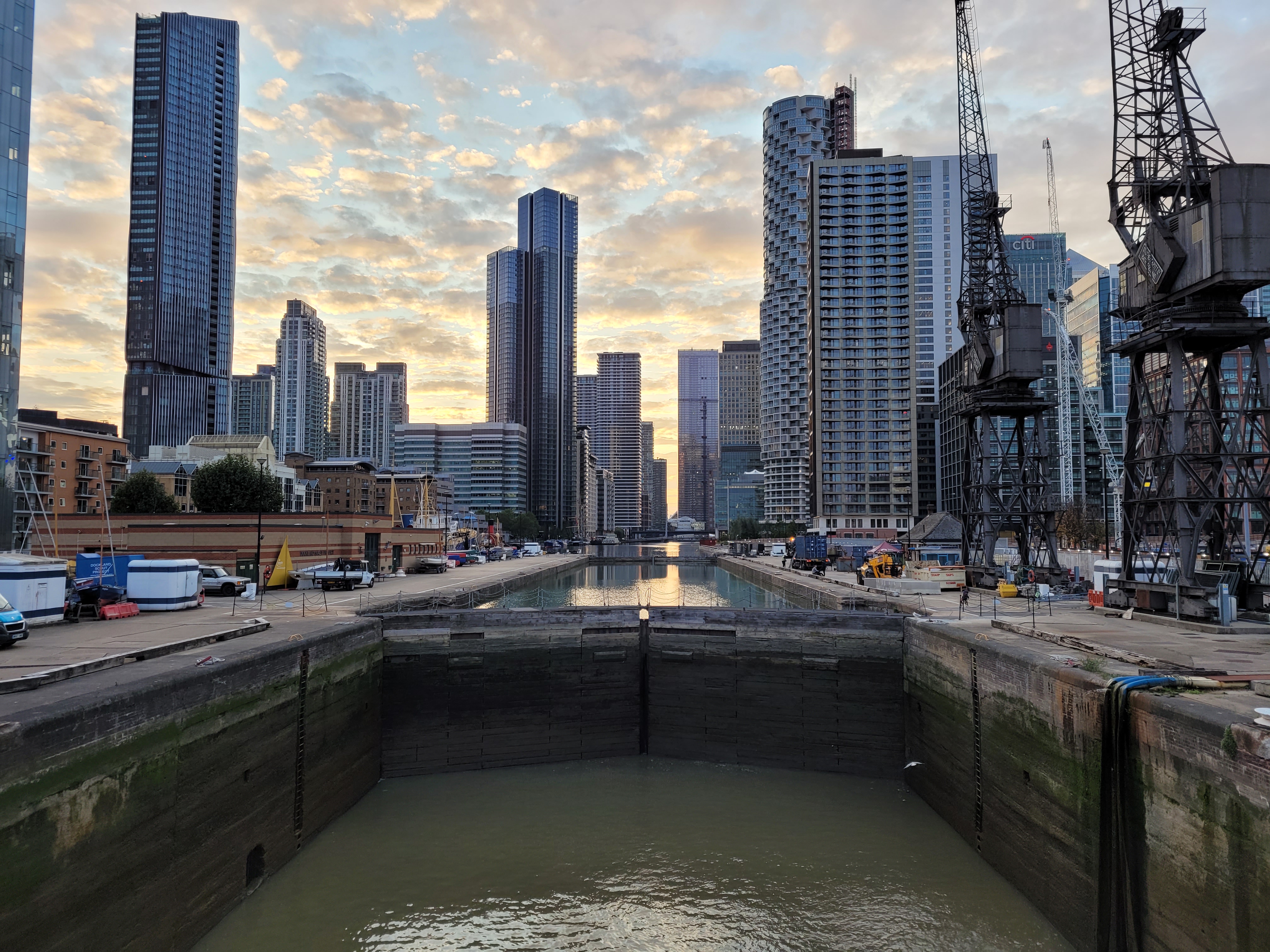 Since the Galaxy S20 FE’s main sensor is identical to the one found on the normal Galaxy S20, image quality in most situations remains practically unchanged. This means that the S20 FE shares its sibling’s shortcomings, most notably with occasionally artificial-looking colours and drab night shots compared to the same images taken on the iPhone 11

Still, the Galaxy S20 FE excels in a few key areas. Pictures taken in daylight are filled with intricate details and they have a little more contrast and less visual noise than the iPhone 11. Likewise, the S20 FE’s 3x zoom camera is an added bonus, since the iPhone 11 only has a dual-camera array, consisting of just a pair of 12MP wide and ultra-wide sensors. 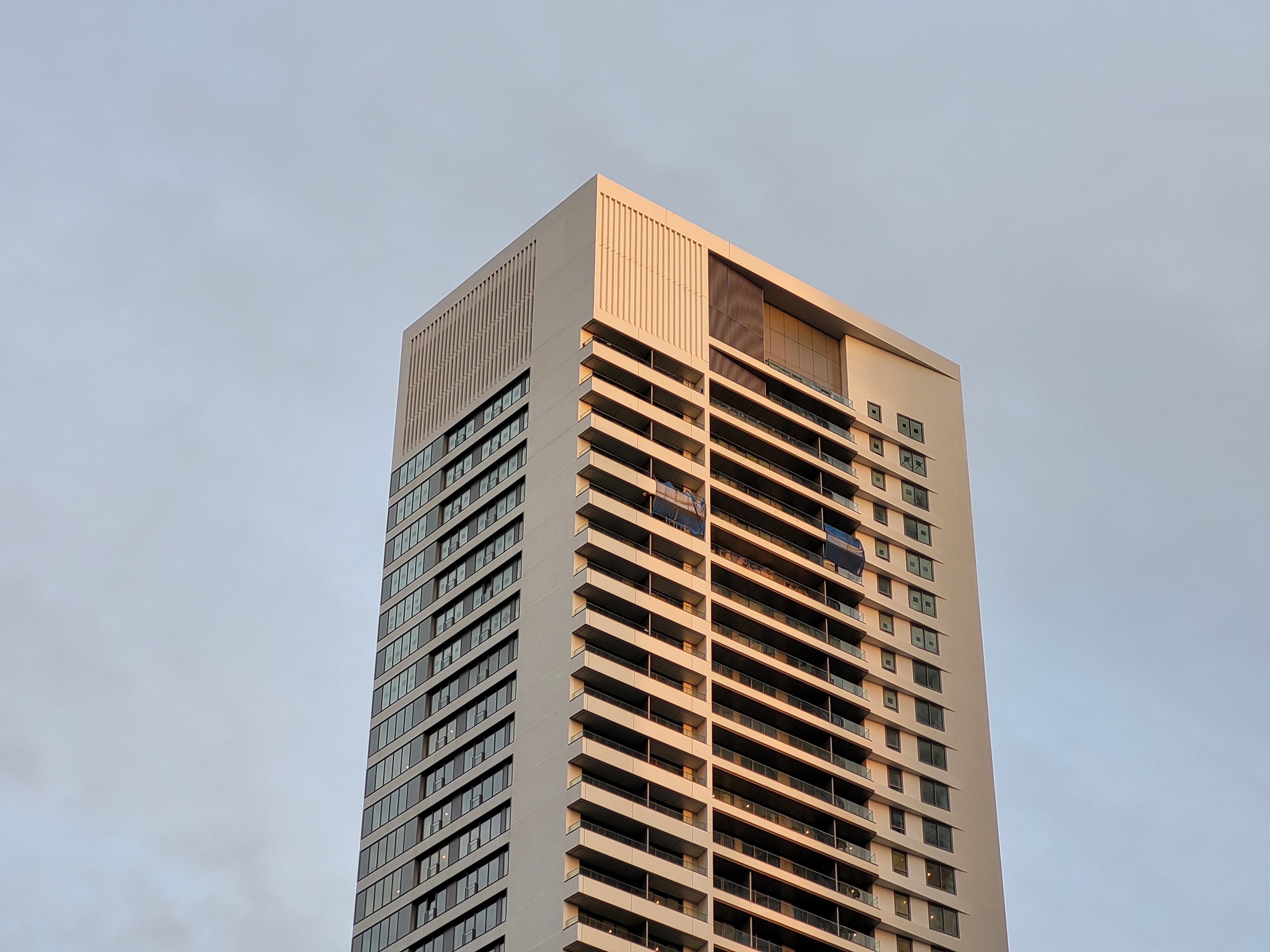 That said, the iPhone 11 just about edges it when it comes to video. The Samsung Galaxy S20 FE gives you the option to record at up to 4K resolution at 60fps but you have to dial the settings down to 30fps in order to enable image stabilisation. The iPhone 11 doesn’t have this problem: image stabilisation is available across all different shooting modes and resolution options.

In my view, it doesn’t make much business sense to launch an almost like-for-like handset for less, mere months after the original versions first launched. Despite the (few) differences, if I bought the regular Galaxy S20 on day one, I would be a bit peeved to see Samsung launch a near-identical handset within the same year for £200 cheaper.

Regardless, If you’re in the market for a Samsung flagship but aren’t too keen on spending close to £1,000 for one, and you definitely don’t mind marginal sacrifices for a sizable saving, then the Galaxy S20 FE is clearly the next best thing.

If you aren’t a Samsung devotee, though, and you’re comfortable with pointing your wallet in a different direction, then it’s possible to save even more money with other flagship-beating options from the likes of OnePlus, Google and Nokia. It’s still a solid choice, but since it doesn’t quite offer the best value, the Samsung Galaxy S20 FE narrowly misses out on a perfect score.

Don't miss a deal at Surfdome
Best offers at Intuit Small Business
Discounts, Sales and Deals at House of Fraser
Save your money with Sky
Online-Shopping with TalkTalk Phone and Broadband
Best products at EBay DE
Latest Posts