The Air is back! Apple unexpectedly revived its old iPad Air branding (formally discontinued in March 2017) in a surprise announcement in March 2019, unveiling a powerful, mid-priced, mid-sized tablet with an A12 processor and support for the Apple Pencil.

But will the Air float your boat? In this review we put it through our rigorous speed, graphics and battery tests, and evaluate design, specs and pricing, to find out if Apple has hit the sweet spot.

The iPad 9.7in (2018) is still on sale, starting at £319/$329 – and that remains the benchmark for a budget iPad. The new iPad Air is pitched a little higher, while remaining markedly more affordable than the iPad Pro models further up the scale.

The iPad Air is available to buy now, direct from Apple and from the usual resellers (such as Amazon and Best Buy), but for its first month or two on sale you should expect high demand and limited supply.

Continuing the inbetweener theme, the Air features an improved design compared to the iPad 9.7in, with among other improvements a larger screen and thinner body, but stops short of the radical changes in the Pro models. 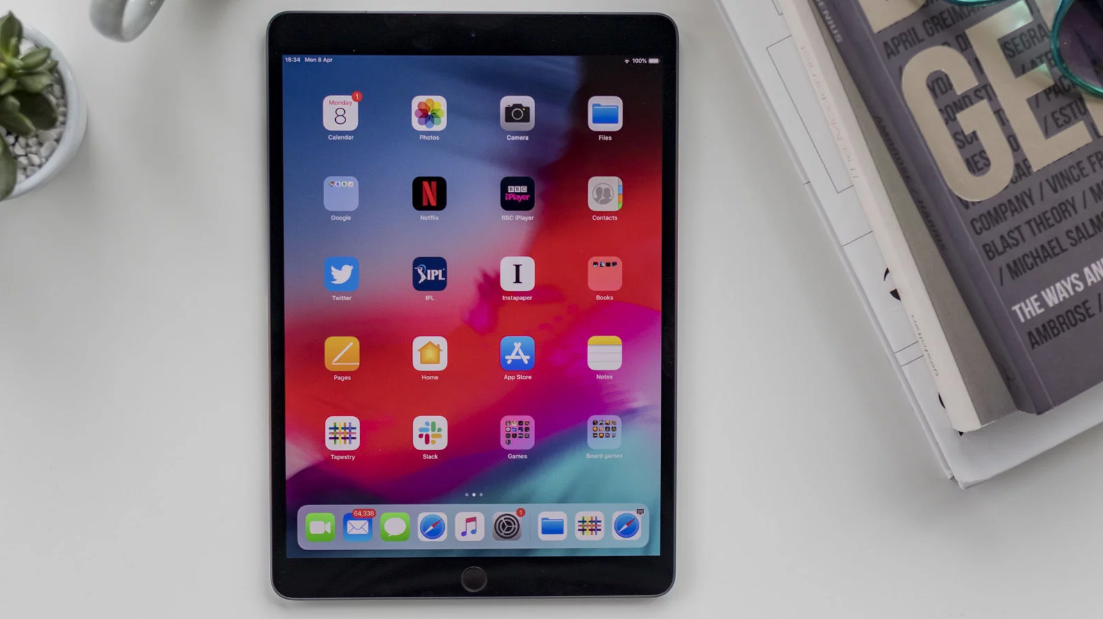 So the bezels around the edge have shrunk slightly, enabling a higher screen-to-body ratio and allowing Apple to squeeze in a noticeably larger display without bulking out the chassis too much. But the Home button remains – whereas the 2018 Pro models ditched the Home button (and Touch ID, replaced by Face ID), which made possible an almost all-screen design. In other words, this is a compromise between the triple ideals of low price, familiarity, and optimum design.

A bezel tweak can only achieve so much, and to accommodate the bigger screen the Air has been made taller and a little wider than the 2018 iPad, although the far slimmer profile (6.1mm, down from 7.5mm) means it’s actually 13-14g lighter. Note that the 11in iPad Pro is 5.9mm, so this isn’t the slimmest mid-size tablet on Apple’s books – although it is the lightest.

A less immediately obvious change from the 9.7in iPad – but one we’re very happy to report – is the restoration of the laminated screen. For cost reasons the 2017 and 2018 iPad 9.7in models both have unlaminated screens, which bend inwards very slightly when pressed and feel a bit cheap. 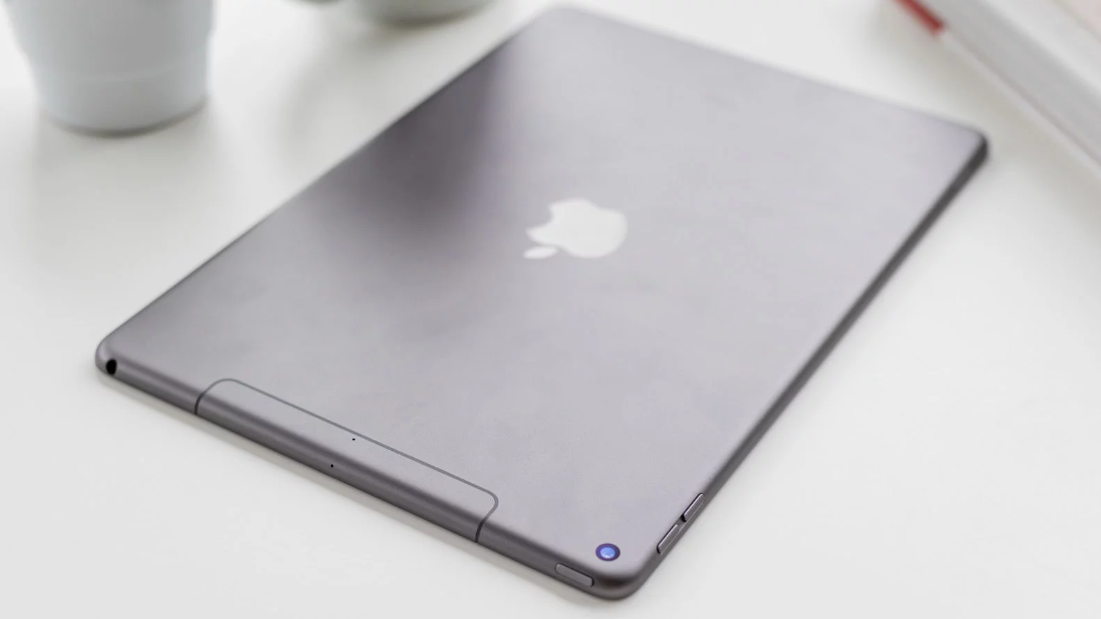 The antenna unit on the cellular model now matches the colour of the rest of the back, rather than being a cheap-looking matt black as on the 2018 iPad. And Apple has included a Pro-style Smart Connector for the Smart Keyboard.

We find the Smart Keyboard quite hard to type on at this size (the 12.9in version is much more comfortable) but it’s still a quantum leap forward from onscreen typing and a big benefit for business types on the go – especially considering how much cheaper this device is than the Pro models you previously had to buy to get a Smart Connector.

But other than the changes outlined above, and a couple of seemingly inconsequential tweaks to the position of ports and buttons, the Air follows the same design as the iPad 9.7in. To be clear, that’s not a bad thing! It’s a beautiful and practical design that looks brilliant and feels great in the hand (and, because you get the curved under-edges rather than the newer squared-off design, it’s actually easier to pick up than the Pro).

And you get a headphone port, which is something Pro owners have to manage without. 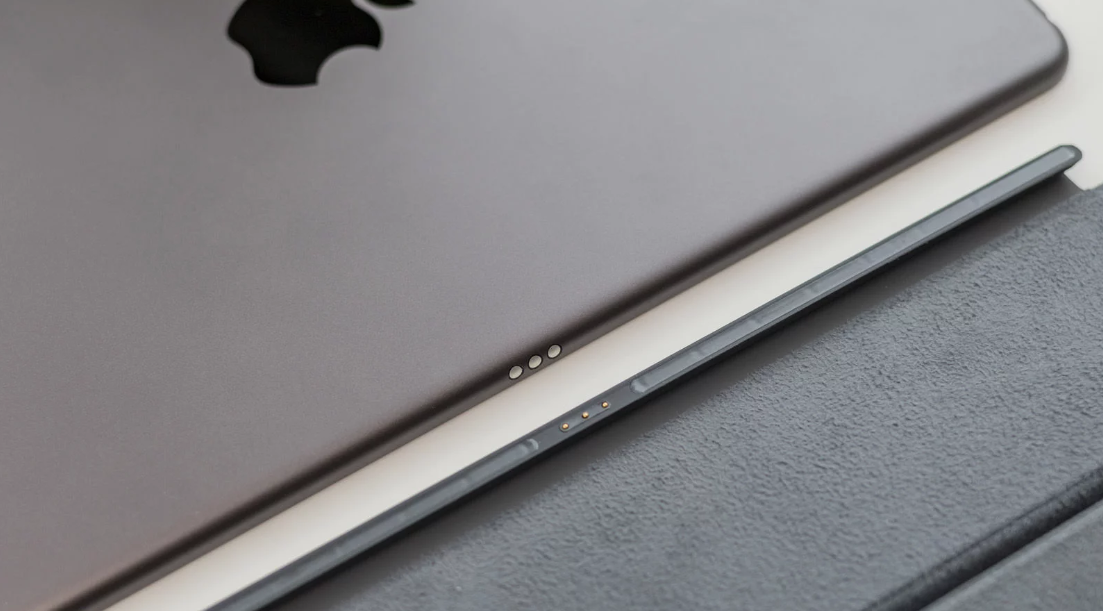 As is standard for iPads currently, the Air comes in silver, gold and Space Grey. We tested a Space Grey unit, but would always vote for gold given the choice.

So much for the iPad Air’s aesthetics. Let’s take a look at how well it performs.

Apple has equipped the Air with an A12 Bionic chip – the latest generation of its mobile processor line. As before this is a compromise, since the souped-up A12X version in the Pro iPads is even faster, but it’s still an impressive inclusion at this price and a big step up from the A10 Fusion in the iPad 9.7in.

To evaluate graphical processing power we use the GFXBench Metal app, and here again we saw a huge step up in performance from the iPad 9.7in and playable frame rates right up to the hardest benchmarks. Performance was admittedly not comparable to the iPad Pro 11in, which was streets ahead throughout, but in most of the tests the Air was able to beat the 2017 Pro convincingly.

If you’re a creative professional looking to use the most demanding video and image processing apps, or a gamer with an eye on the most graphically advanced titles, then you might be advised to plump for an A12X device (or even wait for the next round of iPad Pros, which will presumably get A13X chips). But for almost all of us the iPad Air’s excellent performance will be more than enough, and offers plenty of future-proofing.

The Air has a 30.2Wh rechargeable battery, and Apple reckons this is good for around 10 hours of Wi-Fi browsing. This was borne out in testing: it lasted 9 hours 24 mins in Geekbench 4’s battery benchmark, which is considerably more demanding than real-world use.

That’s almost identical performance to the iPad Pro 11in (9 hours 32 mins), and much better than the iPad 9.7in, which lasted 6 hours 1 min.

Our Air was bundled with a 10W charger, with which it went from empty to 13% power in 30 minutes – pretty slow going. We’ve heard that in some areas the Air is supplied with a 12W charger, which will yield better speed.

Despite the continuing presence of fairly large bezels around edge, the iPad Air’s screen is a pleasure and a triumph, with numerous improvements from the iPad 9.7in.

Resolution is up, albeit only by enough to maintain Retina-standard pixel density (264ppi) across a larger area. It looks fantastic: sharp, bright, colourful. Thanks to the new inclusion of True Tone it provides a consistent output in varied conditions, and the antireflective coating means you have less to fear from bright overhead lighting. 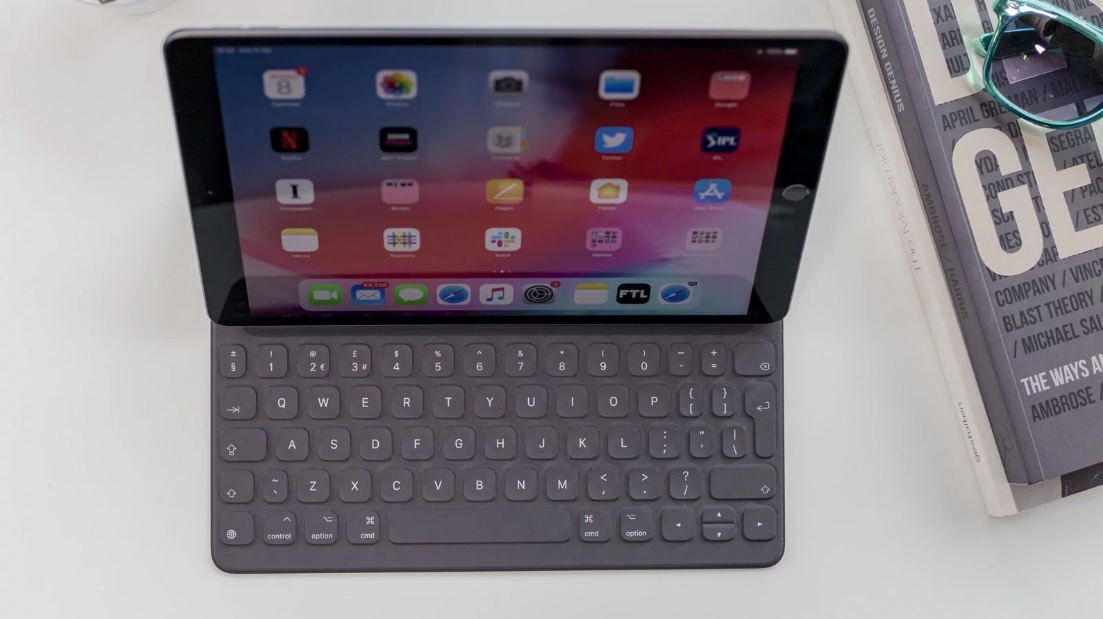 Interacting with the screen feels great, thanks to the lamination already mentioned and the virtually instant response. It would be easy for Apple fans to take this for granted, but not all tablets give such a convincing illusion that you are physically moving around the onscreen elements.

The Air has an 8Mp rear camera, same as on the iPad 9.7in – a respectable inclusion that provides reliably decent images rather than anything spectacular. (We asked Apple if the A12’s neural engine would provide any of the same algorithmic photographic benefits as on the iPhone XS, but the company played this down.) 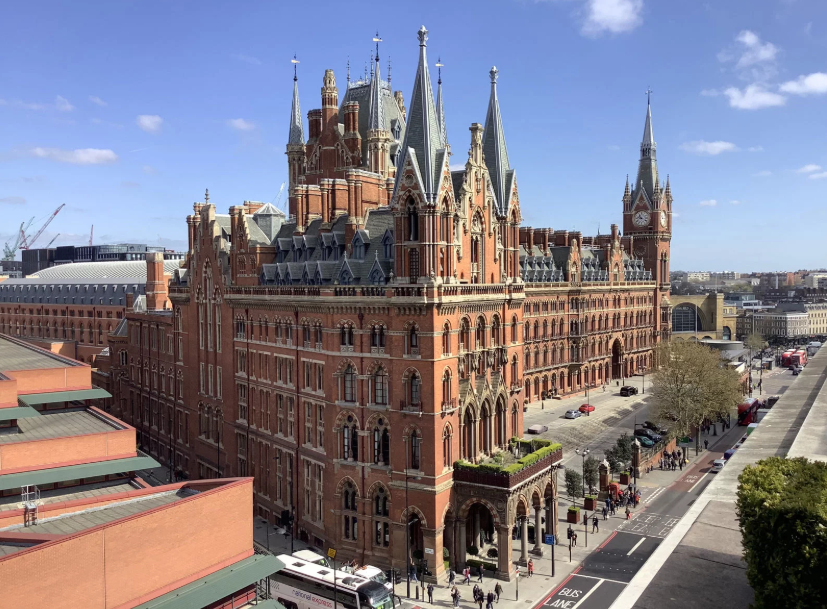 The front camera, on the other hand, is vastly improved: 7Mp and 1080p video, up from 1.2Mp and 720p video in the iPad 9.7in. Which makes sense; few people use a mid-size tablet to take pictures of nice views, but most iPad owners will enjoy the benefit of an improved front camera for FaceTime and selfies. 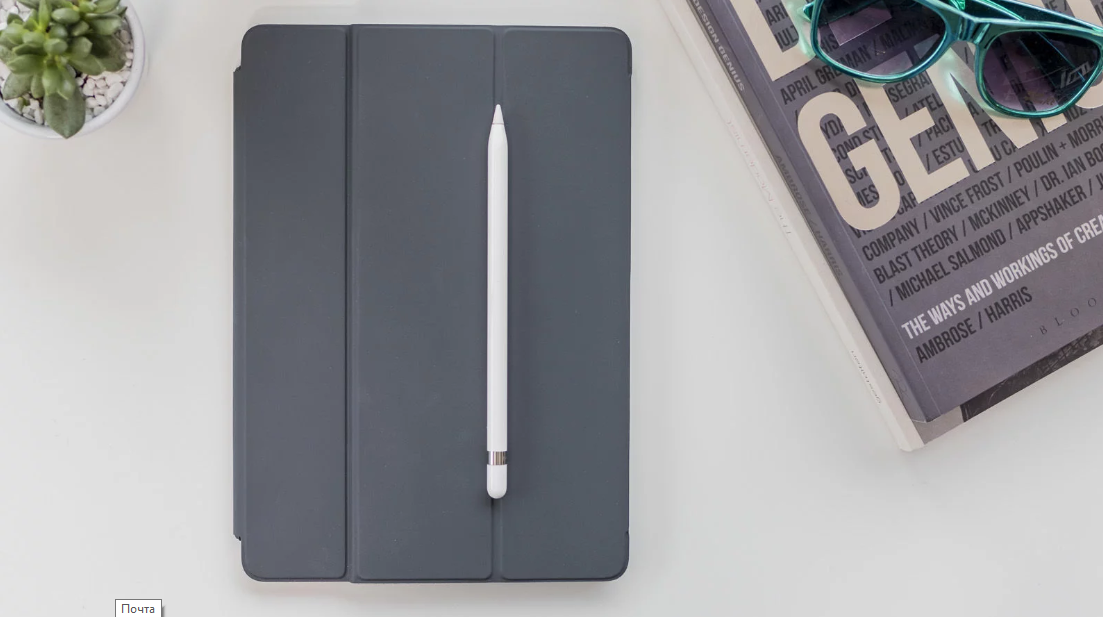 Good news/bad news: the Air is Pencil-compatible, but only with the less good first-gen model, which charges awkwardly via the Lightning port. We prefer the Apple Pencil (2018), which attaches magnetically and charges wirelessly, but that remains exclusive to the 2018 iPad Pro models. 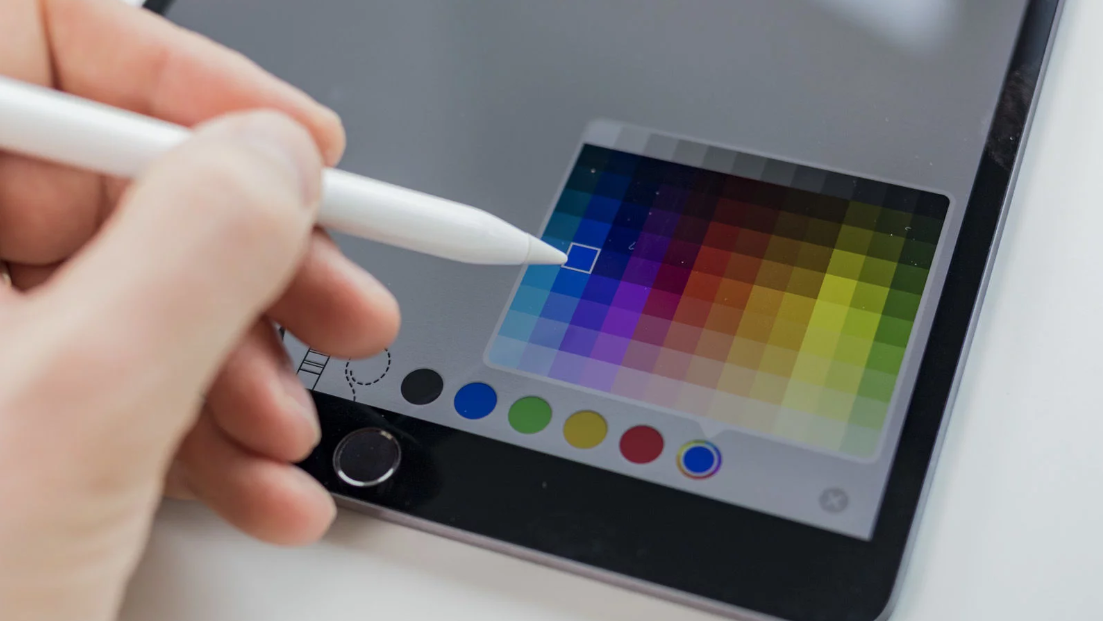 That’s most of the specs & features worth highlighting, but we’ll spare a few words for the storage allocation, which has been doubled at each tier from last year: 64GB and 256GB, up from 32GB and 128GB. That’s perhaps more significant than it sounds, because it means the entry-level model has plenty of storage for the average user, whereas last year we tended to recommend paying extra for the upper tier.

Touch ID is now second-gen, which is faster and more reliable than the first-gen version used previously; eSIM is supported; Bluetooth has been bumped from 4.2 to 5.0, and you now get gigabit LTE. All of these changes are from the iPad 9.7in (2018), and are matched by the iPad Pro 11in. 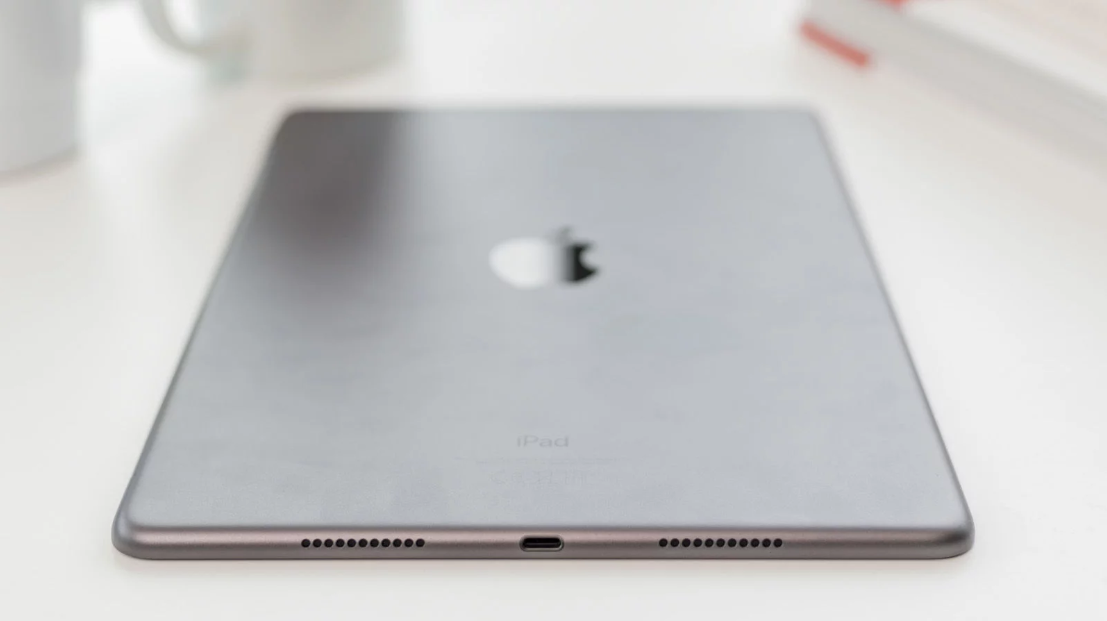 The iPad Air comes with the latest version of Apple’s iOS operating system preinstalled: at time of writing, that means iOS 12.2. iOS is slick and fast – slicker and faster than ever, thanks to optimisation in the version 12 update – and known for its robust security. iOS is a little harder to customise than Android, but the default setup is easier and in our opinion more enjoyable to use.

Unless you’re willing to jailbreak your device, you’ll only be able to download software from the official App Store; still, there’s more than a million vetted, iPad-optimised apps on there. Premium and big-name apps are likely to come to iOS before Android because iPad owners are more willing to spend money.

As well as the speed boost (of interest mainly to owners of older devices), iOS 12 added Screen Time, a feature to help you monitor and limit app and device usage. And group FaceTime calls were added in iOS 12.1.

The iPad Air is a collection of compromises, and in almost every area there’s another tablet out there that’s better: the iPad 9.7in is cheaper, the iPad mini more portable, the iPad Pro 11in more future-proofed for very demanding apps. But as an all-round package this is vastly appealing and quite possibly the best (or at least best-value) Apple has to offer.

It’s a fast machine with a large and well-specced screen, long battery life and attractive (if old-fashioned) design – the old familiar Home button and particularly the headphone port will be seen as plus points by many. The front-facing camera provides high-quality FaceTime video and selfies, and while the rear camera is less impressive this is a sensible area for a mid-size tablet to cut costs.

Talking of which, £479/$499 (for the perfectly adequate base storage allocation) is good value for all the goodies just mentioned. Those on a tight budget should choose the iPad 9.7in, and a Pro model is probably better for a creative professional, but for most people this is now the iPad to pick.

Don't miss a deal at Currys
Best offers at Microsoft Store
Discounts, Sales and Deals at Argos
Save your money with Marks and Spencer
Online-Shopping with Go Daddy
Best products at Brian Tracy
Latest Posts