Despite 2021’s CES being all-virtual. Asus has pulled out the stops and shipped us an early example of one of its new laptops to have a play around with. Alas, they weren’t able to get enough of their ducks in a row to secure us a Flow X13 with its mobile eGPU; but the 14in Asus Zenbook Duo UX482 isn’t a bad alternative.

This is one of Asus’ new generation dual-screen laptops. Like the Zephyrus Duo GX550 I reviewed in 2020, its main 14in display is complemented by a 12.6in, letterbox-shaped, “ScreenPad” situated just above the keyboard.

It’s an ingenious approach and this year’s Zenbook Duo UX482 has a number of improvements. Chief among these is that the second screen now lifts out of the laptop chassis from the rear as you open the lid. That’s a feature only the top-end Zephyrus Duo had last year.

The purpose of the Duo’s UX482 elaborate screen tilting mechanism is two-fold. First, to make the ScreenPad easier to read and, second, to open the chassis to airflow and improve cooling.

My overall impressions of the new ZenBook are very positive indeed. With the lid closed, you wouldn’t know there was a second display secreted inside. It looks like a very nicely designed premium laptop, just like so many others. It’s a touch on the chunky side and heavier than regular ultraportables but a thickness of 17mm and weight of 1.6kg is hardly what you’d call portly. 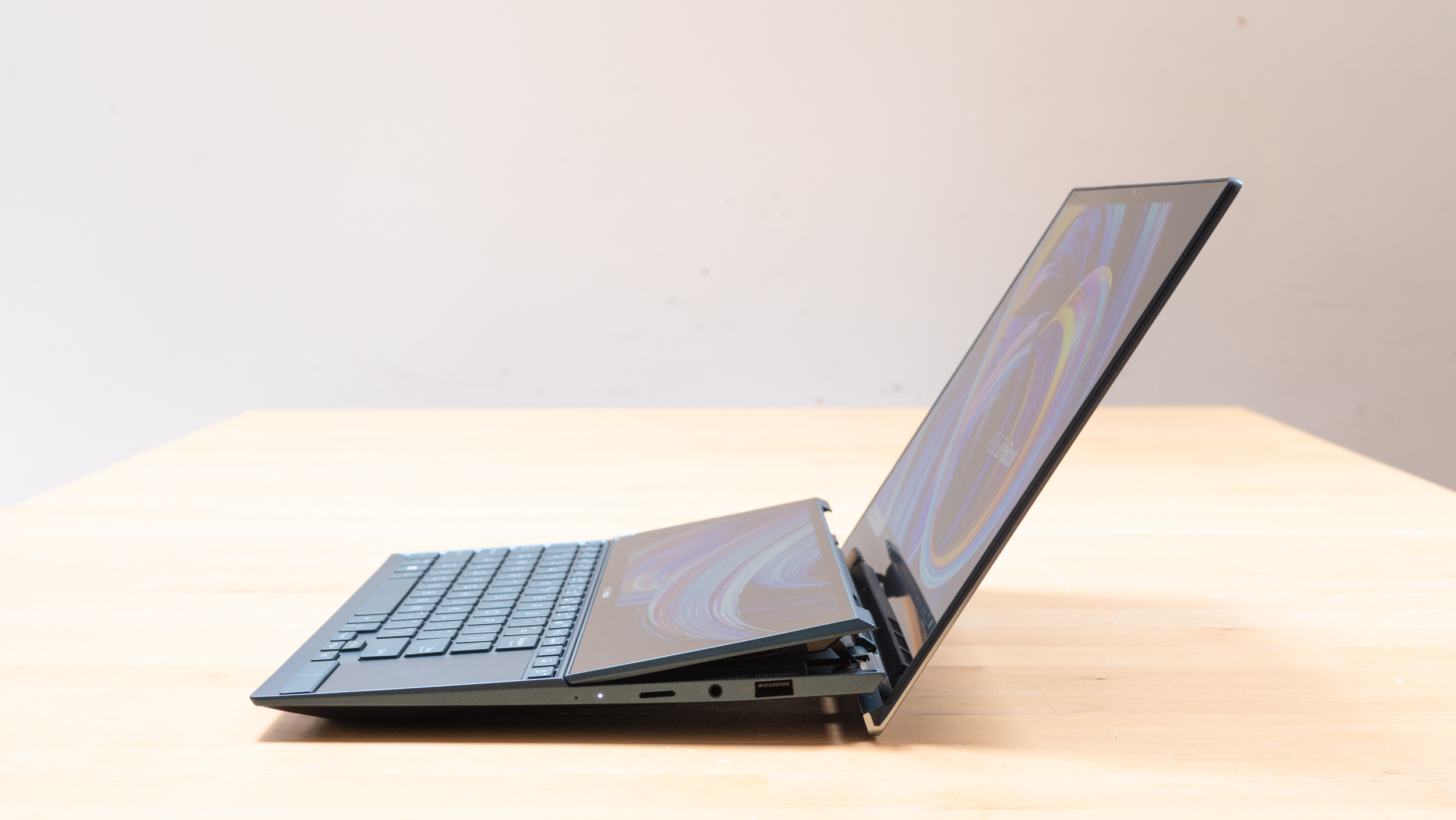 Indeed, with a cool-to-the touch metal lid, an attractive dark-blue colourway and a pattern of concentric circles on the lid that brings to mind the grooves on a coloured vinyl disc, it’s a rather fetching machine as well.

Lever open the lid, however, and the Duo’s party trick slaps you right in the chops. Unlike most normal laptops, the keyboard is situated towards the bottom of the laptop and the touchpad just to the right, while that 12.6in ScreenPad Plus occupies the full width of the chassis just above.

The result is rather smaller keys than you might otherwise expect on a 14in laptop and a rather cramped feel to the compact touchpad on the right. I found the latter particularly difficult to get on with, especially the positioning of the mouse buttons below it. With the left button immediately next to the cursor cluster, I found myself frequently dabbing one when I had meant to hit the other. 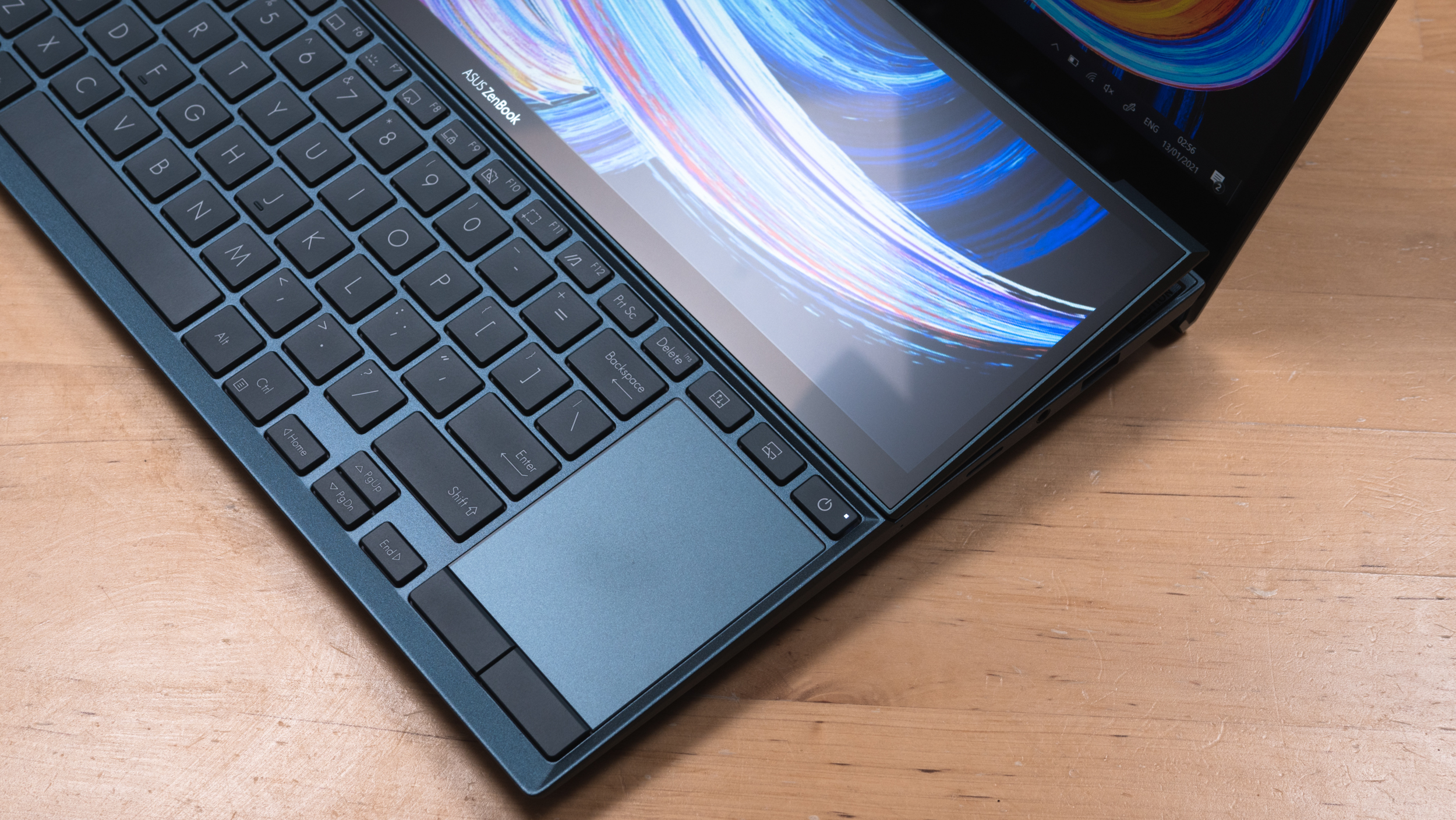 It’s rather easier to get used to the lack of wristrest and the peculiar forward location of the keyboard, however. The lip of the keyboard sits low enough that you’re not reaching up too far with your fingers, although I can see that it might prove problematic if you’re trying to work on the Duo on an aeroplane or train table.

If you’re willing to compromise on those things, the payback is that extra display, which measures 12.6in across the diagonal and increases your screen real estate by almost 50%. Handily in this year’s ZenBook Duo, peak brightness has been improved to match that of the main screen above. It doesn’t look quite as saturated and vibrant as the main Pantone validated 14in screen but it is pretty good and resists fingerprints nicely. Both screens are touch compatible and the ScreenPad Plus is also stylus compatible.

As for connectivity, that’s respectable, too, with one USB-A port, a pair of USB-C Thunderbolt 4 ports and a full sized HDMI output, alongside a 3.5mm headset jack and a microSD card reader. 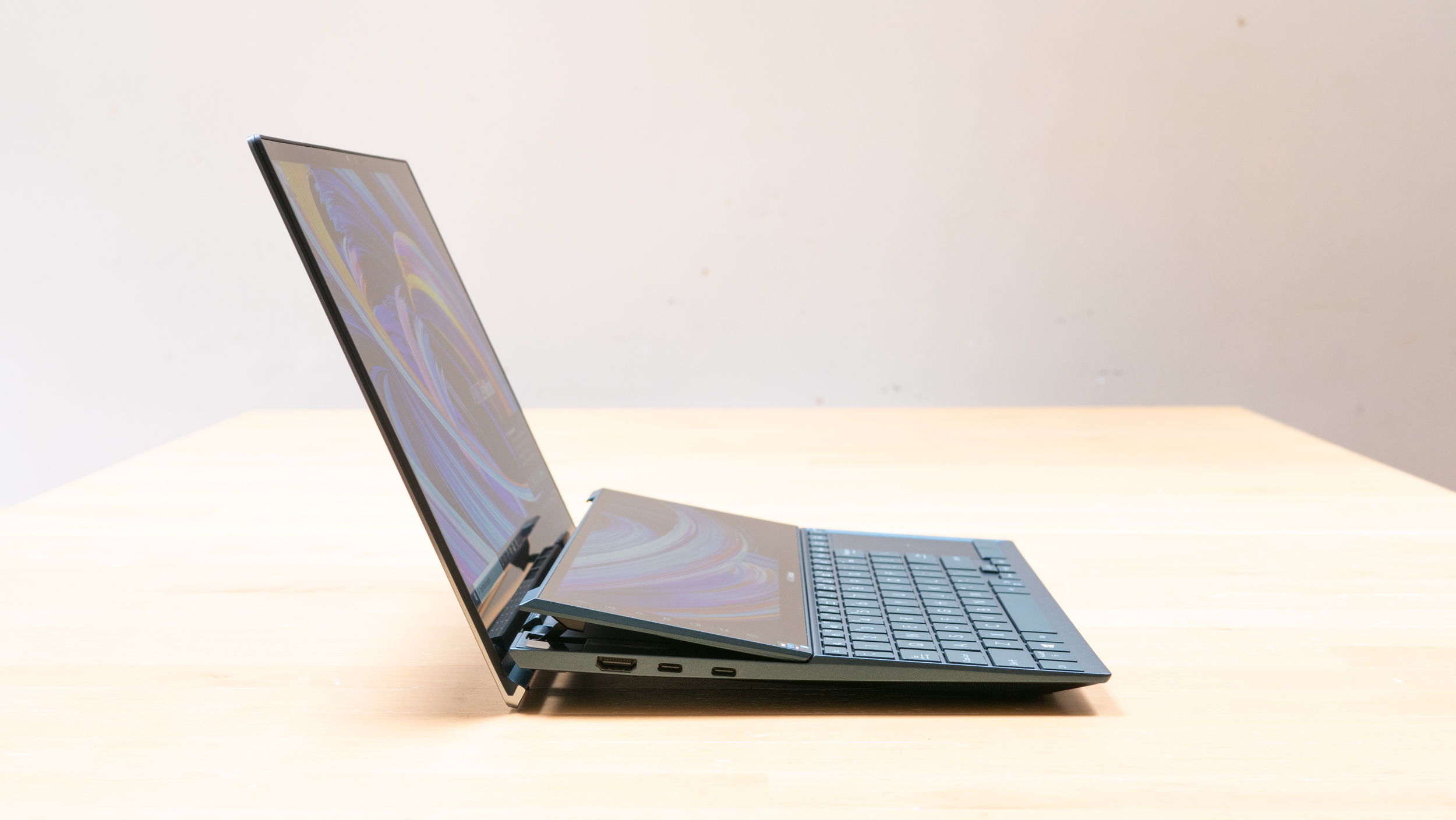 Alas, the ZenBook Duo UX482 doesn’t play host to the latest high-power, H-series 11th-gen Intel CPUs, nor does it have the new 5000-series AMD Ryzen chips inside like some of the other 2021 ZenBooks. Instead, what we have is a choice of either a Core i5-1135G7 or Core i7-1165G7, the latter of which is used in my test subject.

This is backed up by either 8GB, 16GB or 32GB of LPDDR4X RAM and a variety of storage options up to 1TB, including the top-end model, which has a 1TB SSD with 32GB of integrated Intel Optane Memory. The review sample here has 32GB of RAM and a 1TB drive.

I’ve run initial benchmarks – our in-house 4K media tests, Geekbench 5 and GFXBench to give the Intel Iris Xe Graphics a workout – and everything seems to be in order, certainly in comparison to the Dell XPS 13 (note the 4K media benchmark result for the MacBook Pro isn’t directly comparable as it was run under emulation): 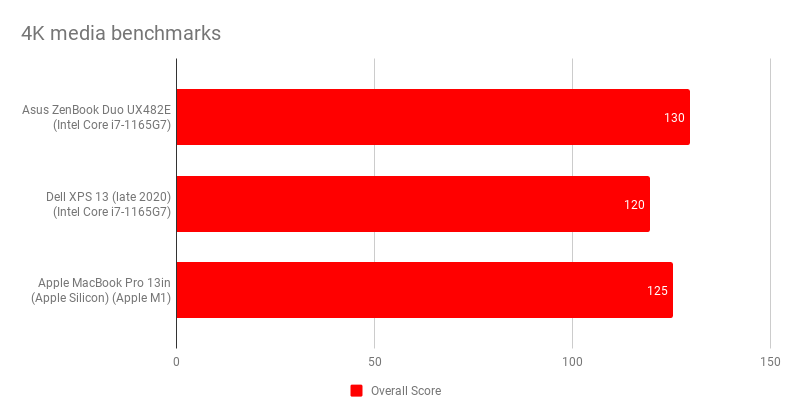 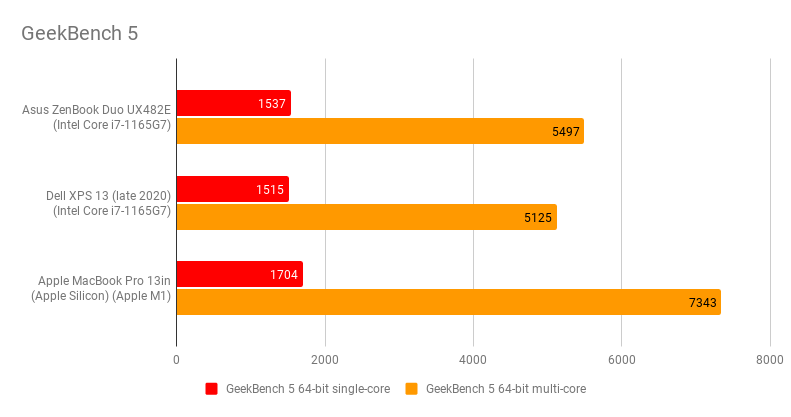 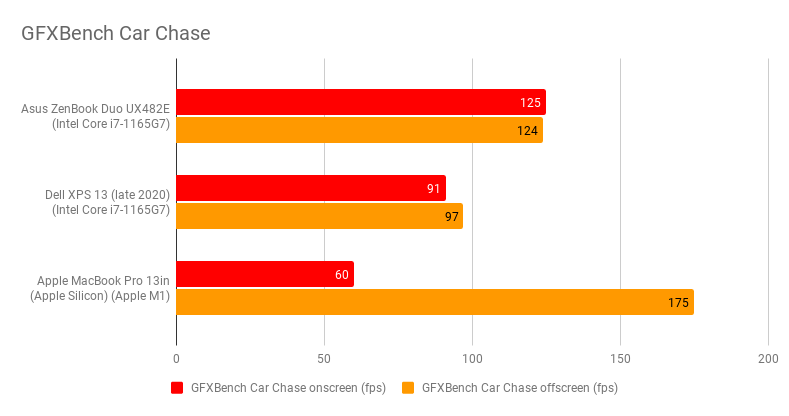 It’s no gaming machine, clearly, but the ZenBook Duo UX 482 is powerful enough to run lightweight titles and there’s easily enough oomph here to run most serious creative applications, such as Photoshop or or Adobe Premiere Pro.

Since this is an early first look, I haven’t had the time to run our full array of battery tests or gaming benchmarks yet, but I’ll be adding details on those as and when they’re complete.

The ZenBook Duo UX482 is certainly unusual and having that extra screen real estate comes in handy for certain tasks. With the lifting mechanism, it’s now a lot easier to read without craning your neck and, remarkably, the mechanism and, surprisingly, the extra screen don’t add hugely to the weight and heft of the laptop.

If that all appeals to you, I can see the new Asus ZenBook Duo 482 tempting a good few buyers. It’s a solidly made machine, compact and reasonably light with the unique appeal of that second screen. There’s nothing else quite like it. 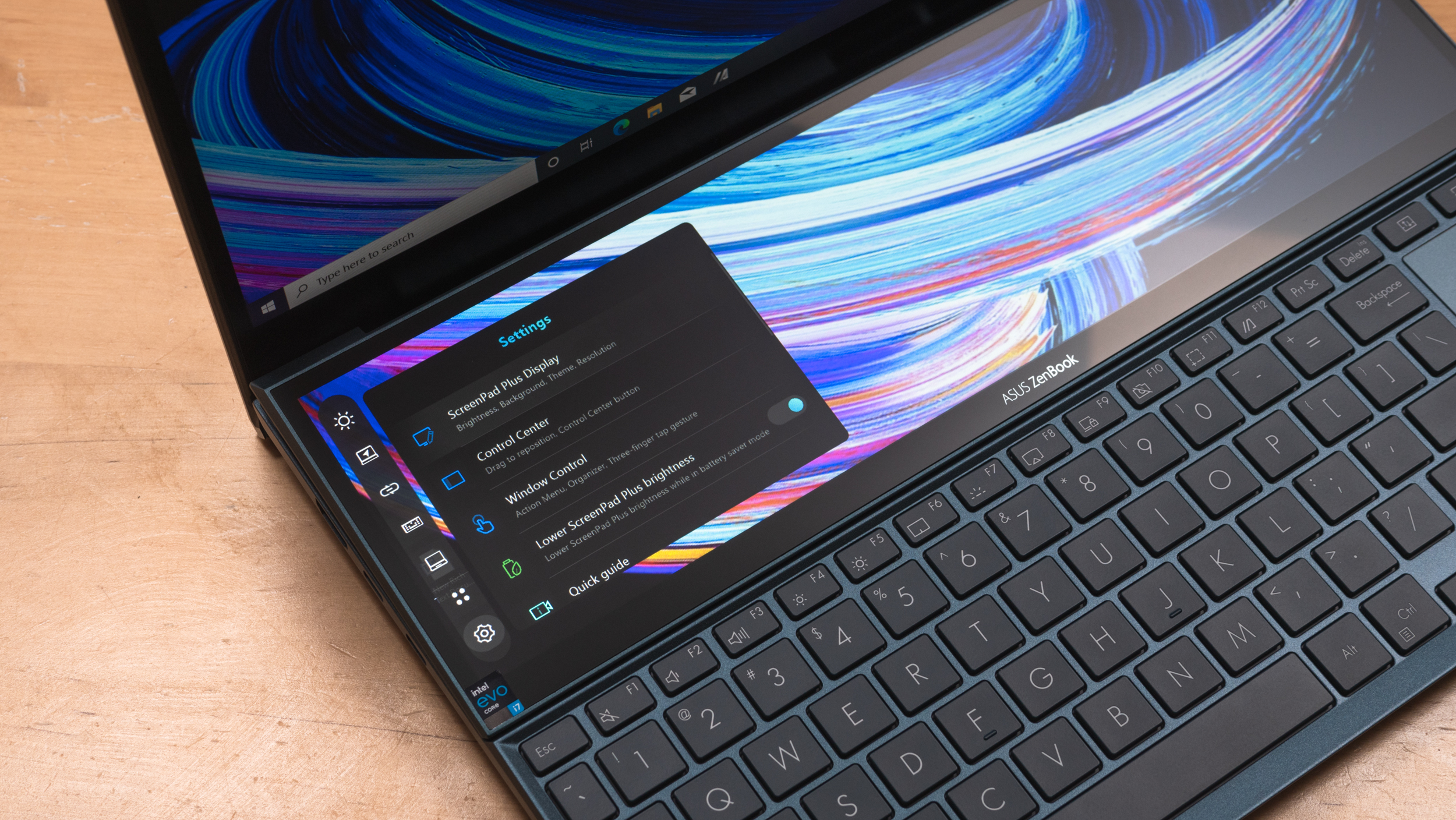 Previous ArticleCES 2021: the Intel Z590 motherboards are here, and they're looking pretty
Next ArticleApple could be planning a premium podcast subscription service
Comments (0)

Don't miss a deal at Boohoo
Best offers at TalkTalk Phone and Broadband
Discounts, Sales and Deals at House of Fraser
Save your money with Ancestry
Online-Shopping with Newegg
Best products at Udemy
Latest Posts