The new Xiaomi 1S retains many of the same features as its predecessor – the M365 – and it’s now at its cheapest price ever!

The Xiaomi M365 was one of the first e-scooters I reviewed last year and I immediately fell in love with it for its perfect balance of weight, range and ease of use. Four years on, however, Xiaomi has decided to give its worldwide best selling e-scooter a much-needed upgrade – and the result is the Xiaomi 1S.

When the Chinese electronics company announced the Xiaomi 1S earlier this year, many were curious as to what changes the new version would bring. Thankfully, the new e-scooter retains most of the features of the popular M365, with just a few much-needed tweaks to bring it up to speed with today’s competition.

Xiaomi 1S review: What you need to know

Even though the Xiaomi M365 e-scooter is still available to buy for £469, we’d now recommend the new Xiaomi 1S because the standard version costs £479, or £499 if you choose to get yours with pre-inserted puncture-prevention fluid. Both scooters weigh 12.5kg, have the same top speed (15.5 mph), range (18.5 miles), maximum rider weight (100kg) and they also share the same 8.5in pneumatic tyres that we prefer over solid rubber ones. 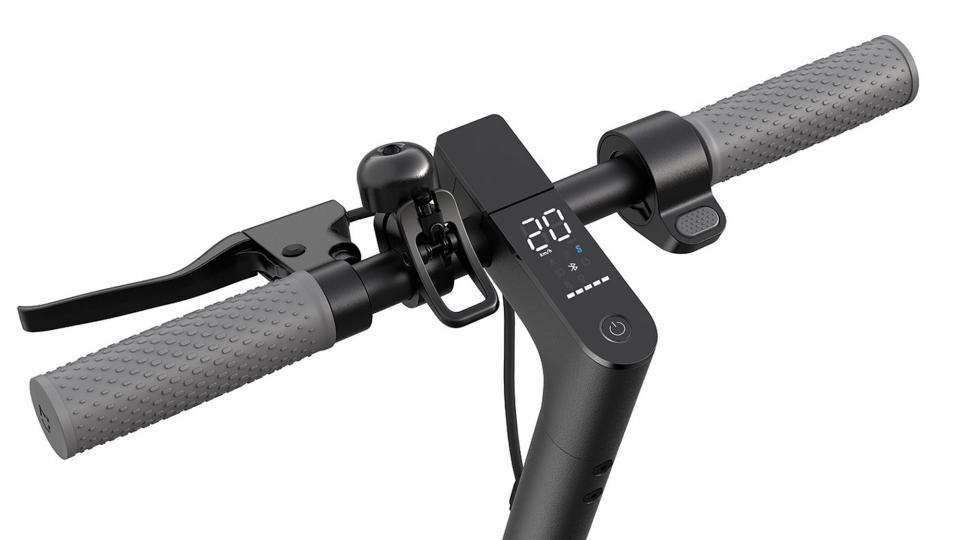 The biggest upgrade on the Xiaomi 1S is its LED display and three riding modes. The M365 has only two riding modes and four battery indicator dots, making it the only e-scooter I’ve reviewed without a display. The 1S also seems to have ironed out any kinks with the patchy Bluetooth connectivity I experienced when I rode the M365.

Before diving into the review, we must stress that it’s illegal to ride a personal e-scooter on both roads and pavements in the UK. You’re only permitted to ride them on private land with the landowner’s permission. The government has recently legalised the use of rental e-scooters in some UK cities, with a view to reducing traffic congestion on shorter journeys. While there is an ongoing bid to legalise private e-scooters, they remain illegal for now.

It was easy to crown the Xiaomi M365 our unanimous ‘best budget e-scooter’ last year because of limited competition, but that isn’t the case this year. The UK’s leading e-scooter retailer Pure Electric have launched their own budget e-scooter – the Pure Air – that now holds that crown. While both the Pure Air and Xiaomi 1S share the same top speed, maximum range, motor wattage and charge time, the Pure Air costs £399, making it £100 cheaper than the 1S.

That being said, both e-scooters have their strengths and weaknesses. The Pure Air can be ridden on wet roads and in rain, and it can accommodate a maximum rider weight of 120kg. By comparison, the Xiaomi 1S is only IP54-rated, which means that riding in rain or puddles will void your two-year warranty and it can only accommodate 100kg, so it’s not suitable for heavier riders. 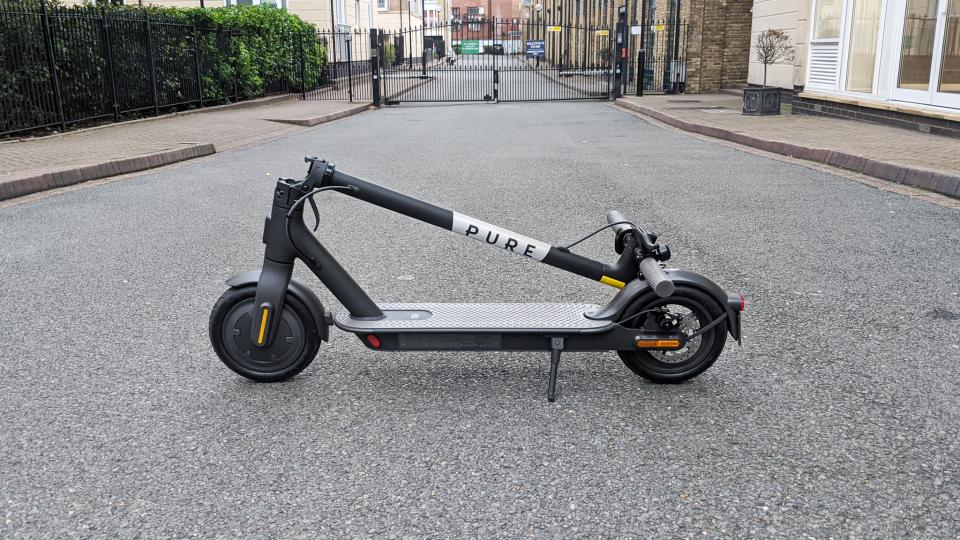 On the flipside, Xiaomi’s offering weighs only 12.5kg, compared to the Pure Air’s chunky 16.5kg and it has Bluetooth features like Motor Lock and Cruise Control built-in, which the Pure Air lacks. Even with the imminent arrival of Bluetooth, the Pure Air won’t get Cruise Control – a useful feature that lets you release the accelerator throttle after you’ve been riding at a constant speed for about 10 seconds.

All e-scooters purchased from Pure Electric come with air pre-filled in their tyres, so even though you’ll need to buy an air pump, you can manage without one when you first get the Xiaomi 1S. The box includes a spare tyre and an extension nozzle for the pump.

After carefully removing the e-scooter from the box, pull up the steerer tube until it’s upright, then secure it in place by pulling up the latch at the bottom of the steerer tube; finally, secure this latch with the release that you simply drag across. It’s all fairly intuitive even though it may sound complex. Next, you need to attach the handlebar to the stem using the four screws and Allen key provided.

The Xiaomi 1S has a 42V rechargeable lithium-ion battery that takes about 5.5 hours to fully charge from empty. The scooter’s charging port is concealed under a red rubber flap beneath the front wheel. Simply connect the power adapter provided into this port and turns green once it’s fully charged.

To fold the e-scooter, slide the release securing the latch on the steerer tube, pull down the latch until the steerer tube starts to fold, then secure it in place by attaching the lever on the bell to the protrusion on the rear mudguard. Again, it’s simple enough to do without even referring to the manual and you can fold or unfold the e-scooter in under five seconds once you get the hang of it. 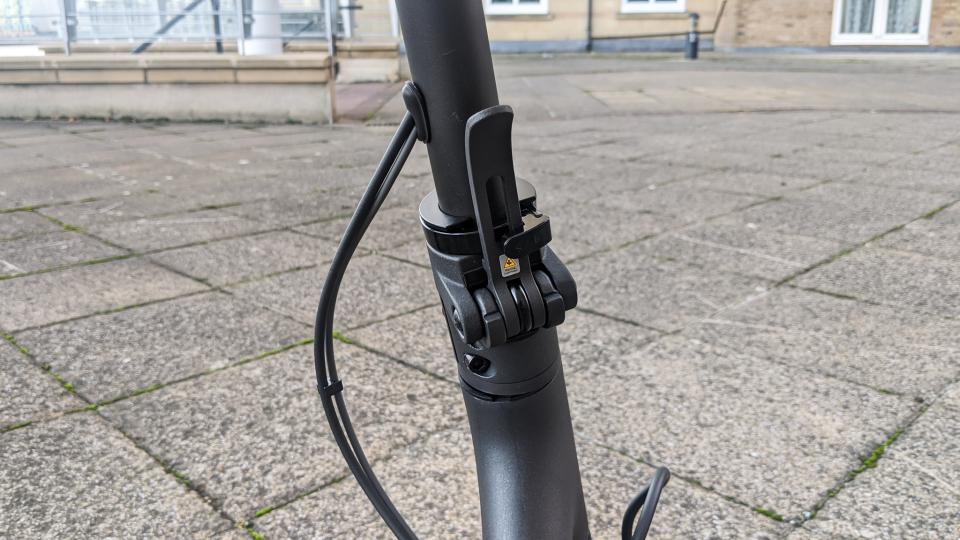 The Xiaomi 1S has a mechanical brake and bell within easy reach of the left handle grip and an accelerator throttle just below the right handle grip. It also has front and backlights, and orange reflectors on both sides (left and right) of the tyres. One tiny but noteworthy new feature unique to this model is that the rear fender is attached to the scooter’s base. This stops the fender from vibrating when you’re riding on uneven surfaces but, more importantly, it prevents riders from stepping on the rear fender to use it as a brake.

Pedestrian mode is indicated by a walking man icon and it tops out at 3mph; ideal for when you’re walking with your e-scooter because the throttle doesn’t activate in this mode. Drive mode is denoted by a blue “d” icon and has a top speed of 12.5mph. The fastest is Sport mode, denoted by a blue “s” icon, with a maximum speed of 15.5mph.

Before taking your Xiaomi 1S for its first ride, you should first update its firmware. To do this, simply install the free Xiaomi Home app (available for both Android and iOS), turn on your phone’s Bluetooth, create a Xiaomi account or login to your existing one, and follow the onscreen instructions. As soon as you pair the app with your e-scooter, you’ll see a Bluetooth icon on your scooter display, and the app will automatically update its firmware. 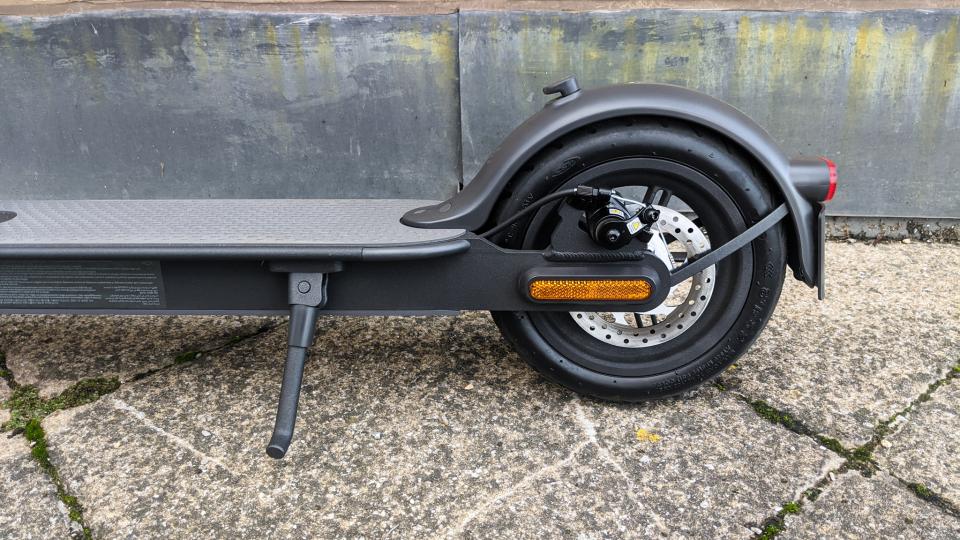 The app’s main screen displays your riding mode, speed, battery level as a percentage, your average speed and current trip mileage. It also gives you the option to lock the motor on your Xiaomi 1S, which is great if you’re leaving it unattended for a few minutes. We like that this main screen is kept simple and doesn’t include any unwanted settings or social elements.

You can delve further into the e-scooter’s settings using the three dots at the top-right of the main app screen. This section lets you activate cruise control, choose whether you want to keep your taillight on all the time, update your firmware and even change the scooter’s units of measurement (both on the LED display and within the app) from the default kmph to mph.

Before riding the Xiaomi 1S, it’s important to set your riding mode and toggle the headlight on or off depending on the conditions outside. One of the best features of Xiaomi e-scooters is that you don’t need to pair the app with your e-scooter before riding unless you want to lock it. Cruise control works by default, provided you’ve turned it on within the app beforehand.

To ride, kick-off from the ground to set the e-scooter in motion, then gently press the accelerator throttle. Usually, I prefer riding in the fastest mode and varying the pressure I apply to the accelerator to control my speed, but on the 1S I actually prefer riding in Drive mode. That’s because there isn’t a big difference between the maximum speed in this mode and the Sports mode, which is a bigger battery hog. The slightly lower top speed also gives you more control of the e-scooter. 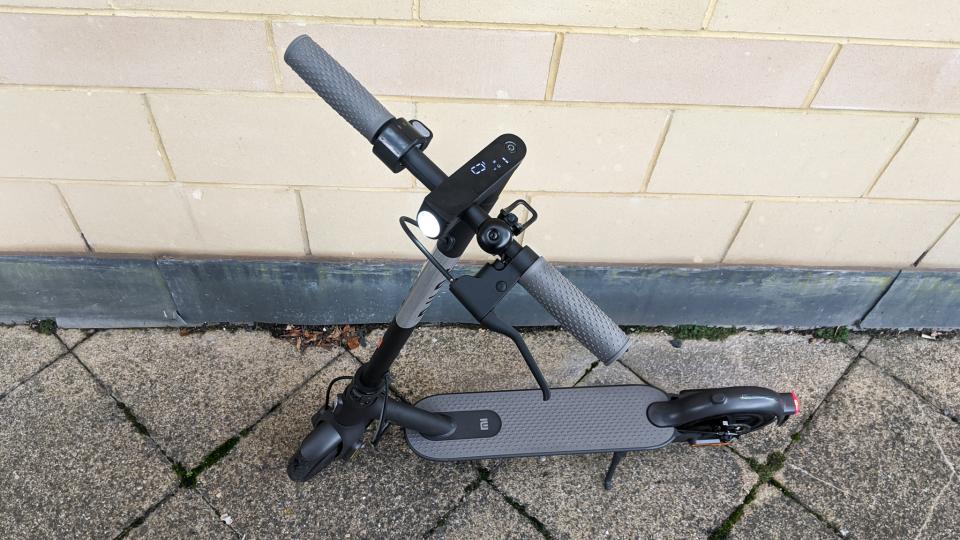 The 250W motor on the 1S is almost completely silent; so silent in fact that I had to use the bell on more than a few occasions because pedestrians couldn’t hear me approach even when I was less than two feet behind them. The pneumatic tyres provide great grip on every road surface, but you will notice slight jarring if the terrain gets rough.

The 1S’ combination of front and rear disc brakes do a great job of smoothly and quickly bringing you to a halt. I tried braking at full speed and even though this produced a sharp sound from the rear brake, the scooter brought me to a controlled stop in under two seconds. As an added bonus, the regenerative front brake harnesses the braking forces to top up the battery, too.

The Xiaomi 1S is an absolute pleasure to ride. It retains all the best features of the M365, while making a few vital upgrades mainly to the LED display. The only reason this e-scooter falls short of taking the best budget e-scooter crown – as worn by its predecessor – is because of the Pure Air. Even though Pure Electric’s budget e-scooter is heavier and doesn’t have Bluetooth integration, it’s £100 cheaper, you can ride in rainy British weather without worrying, and it’s ideal for heavier people. Because of that, the Xiaomi 1S will just have to settle for second place this time around.