Snapdragon 8cx could finally compete with an Intel Core i5 – will Windows on Snapdragon laptops no longer suck?

Benchmark results have leaked that apparently show that the upcoming Qualcomm Snapdragon 8cx will have a considerable leap in power over its predecessors, and can even rival the mid-range Intel Core i5 family of processors.

Previous Snapdragon chipsets included in Windows 10 laptops have offered long battery lives (over 20 hours) and smartphone-like features such as instant boot times and always-connected cellular data, but they have suffered from poor performance compared to laptops with more traditional processors from Intel and AMD – while also being pretty expensive.

So, the fact that the upcoming Snapdragon 8cx will apparently offer hugely improved performance is incredibly exciting, and means future Windows 10 on Snapdragon devices could finally deliver on the promises Qualcomm and Microsoft have made about the platform. 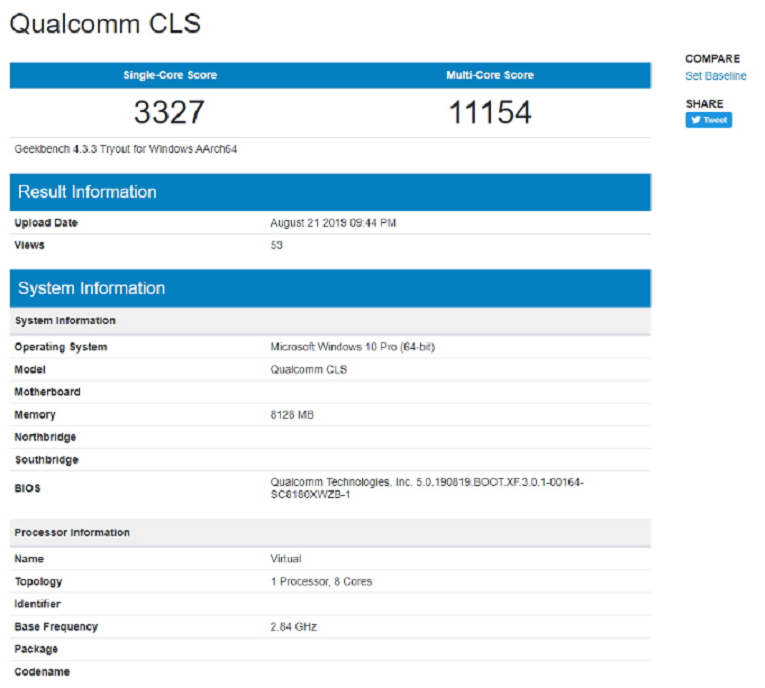 According to the Geekbench benchmark results, the Qualcomm Snapdragon 8cx is clocked at 2.84GHz and has eight cores. It managed a single-core score of 3,327 and a multi-core score of 11,154.

As MSPowerUser points out, this compares favorably with the Intel Core i5-8250U, which manages 3,659 single-core and 11,192 multi-core.

Unlike previous Snapdragon chips, which were designed primarily for smartphones and tablets and then ported to laptops, the Snapdragon 8cx is Qualcomm’s first chipset that’s been built from the ground up for computers first and foremost – and it looks like that has paid off with a big leap in performance.

We’ll be seeing an influx of Snapdragon 8cx-powered laptops later this year – with Lenovo announcing Project Limitless back at Computex, which it claims will be the first 5G Snapdragon 8cx laptop.

If these benchmarks are correct, it means we’ll finally see Snapdragon laptops that offer huge battery lives without compromising on performance – and they could even play the odd game. The future of laptops is getting very exciting indeed.

Don't miss a deal at Intuit Small Business
Best offers at Vodafone UK
Discounts, Sales and Deals at Currys
Save your money with Sky
Online-Shopping with Marks and Spencer
Best products at Nike DE
Latest Posts