Motorola has managed to hit a rich vein of form with its budget smartphone line-up. With the latest flagship prices steadily spiralling into four figures, Moto’s wallet-friendly alternatives are a safe choice for consumers put off by how much Samsung and Apple are charging for their own top-end smartphones.

In recent months we’ve seen Motorola change course slightly, dipping its toes into the mid-tier and further away from its budget roots with a new range, which includes the Motorola One and One Vision. These souped-up budget phones typically cost slightly more than Moto’s usual output but provide fancy features more closely aligned with their flagship counterparts.

The freshly squeezed Motorola One Action is the cheapest of the bunch, although confusingly costs exactly the same as the Moto G7. With a few extra bells and whistles, is the G7’s affordable smartphone crown about to slip?

Motorola One Action review: What you need to know

You might want to pick up the Motorola One Action for its video recording capabilities. Bringing a triple camera setup to its budget range for the first time, Motorola has packed the One Action with a long list of recording features, most notably the ability to film landscape footage while holding your phone vertically. 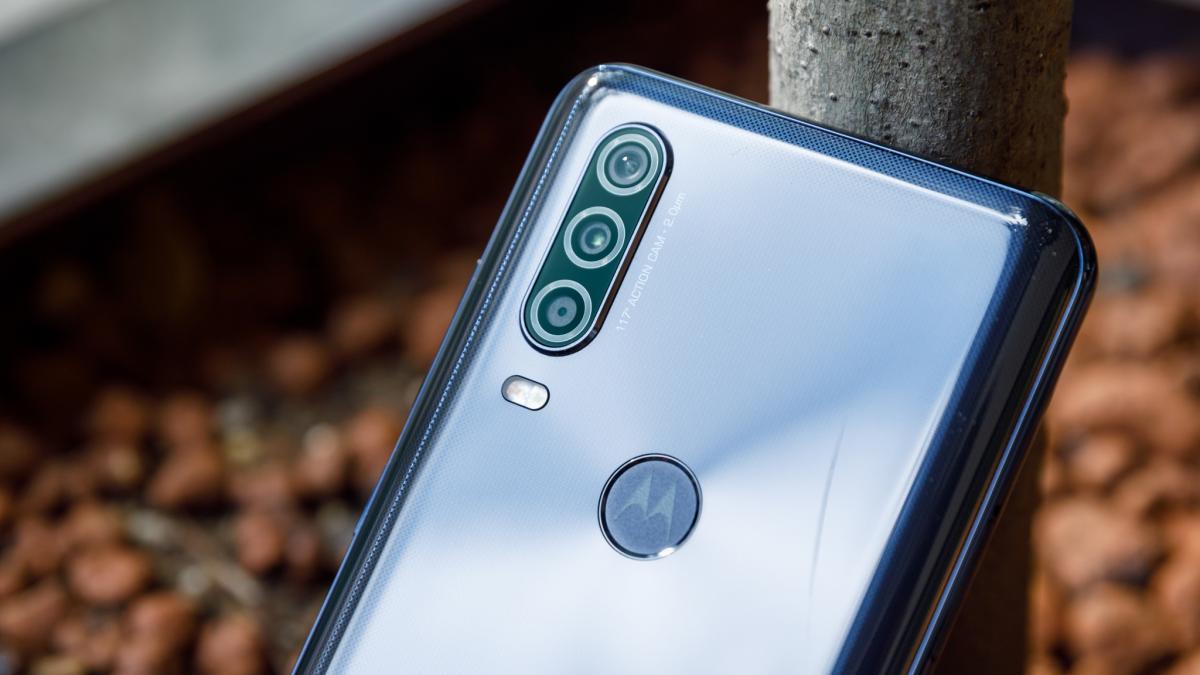 The good stuff doesn’t stop there, either. The One Action also benefits from a 21:9 aspect ratio screen, with a 2.2GHz Samsung Exynos 9609 chipset powering the phone, along with 4GB of RAM and 128GB of expandable storage. Moto’s latest budget handset also runs the special “Android One’ version of Android 9 Pie, which ensures the phone receives crucial software updates on a monthly basis for at least two years after its release.

At £219, the Motorola One Action hits exactly the same price as the Moto G7, planting it firmly into the budget category. There’s certainly a lot more on offer here than what we saw with the Moto G7, but it’s still worth considering its similarly-priced counterparts.

Aside from the G7, our pick of the bunch around this price includes the Honor Play, primarily because it squeezes in a surprisingly fast Kirin 970 processor. There’s also the Huawei P Smart – which is slightly cheaper – although this isn’t necessarily the smart choice, as it struggled in our photography and video tests.

Motorola isn’t setting out on a radical departure on the aesthetics front, but that’s certainly not to the Action’s detriment. The contoured “4D” glass-coated design is an industry-standard at this point, but the One Action looks as swish as ever, fitting snugly in the hand despite its large size. Meanwhile, the pin-hole notch in the top-left corner of the screen, which houses the 12-megapixel selfie camera, helps with a nicely tidy viewing experience. 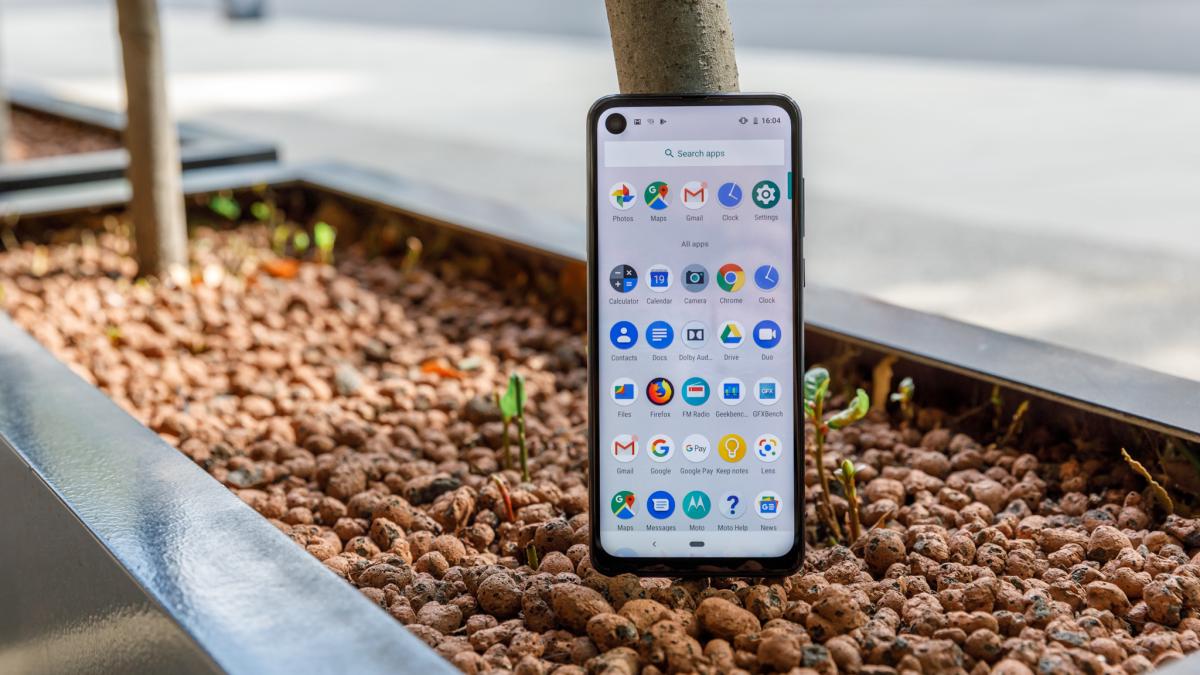 Likewise, the One Action’s two stylish colour choices – Denim Blue and Pearl White – softly glisten whenever the light catches the rear panel and sides of the phone, looking more like something you’ve paid twice, perhaps even three times as much for.

There are no surprises when it comes to the phone’s various physical elements, either. The left edge hosts the nano-SIM card slot, which also includes a space for a microSD card if you wanted to increase the phone’s 128GB of internal storage. The USB Type-C charging port is in the usual place at the bottom of the phone, the power and volume rocker keys are on the right edge, and a 3.5mm audio jack sits on the top.

The One Action benefits from a 6.3in FHD+ (2,520 x 1,080) IPS screen. By comparison, the Samsung Galaxy Note 10 uses a display that’s the same size and resolution, but costs almost four times the price. This further diminishes the Note 10’s phablet credentials, and I certainly know which phone I’d rather spend my money on.

Still, because this is an IPS panel, you aren’t getting the same level of high-quality viewing experience as its OLED-fitted counterparts (which, incidentally, includes the Note 10). Regardless, the Action’s screen is pretty good for the price – covering 93% of the sRGB colour gamut on the phone’s default ‘Natural’ display mode. Aside from a few issues of oversaturation in some of the dark-red and light-green tones, the One Action manages to produce wholly accurate colours across the entire palette. The screen’s contrast ratio of 1,253:1 is also pretty good, while the maximum screen brightness of 418cd/m2 also helps boost readability in bright environments.

Just like the One Vision, this display is also stretched out to an elongated aspect ratio of 21:9. This means you should be able to squeeze more of your Facebook and Twitter feeds onto the screen, and you can also watch 21:9 content on Netflix and Amazon Prime Video without having those pesky black bars above and below the footage.

The Samsung comparison from earlier is even more relevant when you begin to look at the One Action’s internal components. See, rather than sticking with the Qualcomm standard, the Moto One Action uses one of Samsung’s homebrew mid-tier chipsets, more specifically the octa-core Exynos 9609.

This isn’t the first time we’ve seen this processor, which first powered the Moto One Vision, though we’re yet to spot this mobile CPU inside one of Samsung’s own handsets, which is odd.

Regardless, as we initially saw with the Vision, it’s a remarkably nippy handset for the price. Running Geekbench 4’s single- and multi-core CPU tests, we found that the One Action reached scores of 1,606 and 5,362, which plants it firmly in the midst of its rivals.

In fact, we found that performance was slightly better than some of its more expensive contemporaries, including both the Xperia 10 and Moto G7 Plus. In real-world testing, the Moto One Action managed to keep up with pretty much any application we threw at it, and handled multitasking without any hiccups too.

Gaming performance is equally remarkable, with the GFXBench on-screen Manhattan 3.0 test returning an average frame rate of 21fps. That might not sound like much, but this is a pretty demanding test of a phone’s GPU, so you shouldn’t encounter any glaring issues when running graphically intensive titles such as PUBG: Mobile or Fortnite.

The Moto One Action’s battery life isn’t quite as good, though, managing just 14hrs 21mins during our video rundown test. Don’t get me wrong; that’s certainly not a bad score, but we’ve recently seen plenty of phones reach well into the 20-hour mark, so this is a bit of a shame.

Motorola is finally following the multi-camera trend, equipping the One Action with a trio of rear cameras. Rather than use the Vision’s 48-megapixel sensor, Motorola’s latest handset incorporates a 12-megapixel (f/2.2) camera, alongside a 5-megapixel depth-sensing lens for more effective blurred background portrait photography.

The third camera is what makes the Moto One Action slightly special. This ‘action’ camera uses an ultra-wide, 117-degree lens to squeeze four times more of the scene into one frame. This camera has also been rotated by 90-degrees, allowing you to film landscape video while holding your phone in portrait mode. 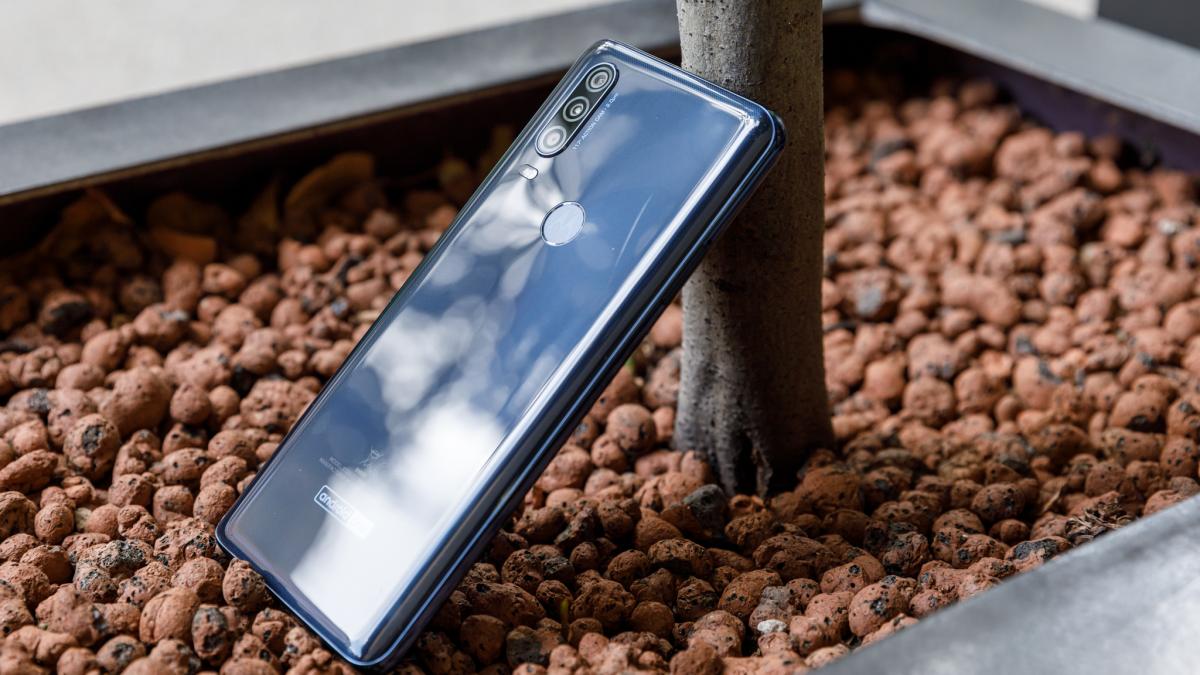 It’s a unique proposition of course, but I don’t think portrait video will go completely extinct because of it, and I can’t imagine many smartphone manufacturers will want to adopt a similar approach. Likewise, if you did want to film in portrait using this camera, you’re forced to hold the phone horizontally. That’s awkward.

Nevertheless, the Moto One Action benefits from a long list of recording features. This is perhaps the most feature-rich budget phone yet, allowing you to record 4K video in 21:9 format and Full HD footage at a silky smooth 60fps. Rock-steady video stabilisation is available for Full HD shooting modes with either camera, too.

It comes as a bit of a shame, then, that the video quality of this ‘Action’ camera isn’t entirely what it was hyped up to be. I must say that the footage does look nice and smooth, and having the opportunity to squeeze in more stuff in the frame is most welcome, but the detail is sorely lacking. The Moto G7’s video introduces punchy, vibrant-looking colours, while the One Action’s output looks unremarkably drab.

Mercifully, the One Action is more adept at taking pictures. In fact, I’d go so far as to say that the Action does a better job at capturing the scene than the Moto G7 – images are filled to the brim with detail, with superb colour rendition and a well-judged HDR mode. In low-light, everything looks just as good, without the excess noise that spoils image-quality on the Moto G7.

Despite the gimmick, and the few issues with video recording, the Moto One Action successfully delivers the death knell for the Moto G7. Filled to the brim with niceties, but costing the same price, the One Action is Motorola’s most well-rounded phone yet, possessing all the credentials to go toe-to-toe with smartphones that cost much, much more.

Don't miss a deal at Carphone Warehouse
Best offers at Bodybuilding
Discounts, Sales and Deals at Mobiles
Save your money with Marks and Spencer
Online-Shopping with The Home Depot
Best products at TalkTalk Phone and Broadband
Latest Posts