Creative people! Microsoft wants you to know that it has your back. The Surface Studio, which I’ve finally managed to get some hands-on time with, is the biggest statement yet that the company believes it can woo away creatives, both amateur and professional, from the platform that they have always favoured: the Mac.

Of course, plenty of hardware makers have attempted to ape the iMac’s all-in-one format, with lesser and greater degrees of success. HP, for example, makes a really nice range of machines, including ones with studio-tuned audio. But, still, the iMac is seen as the definitive all-in-one.

But the Surface Studio doesn’t just imitate the iMac: in some keys ways, it goes past it. Essentially, what Microsoft has created is a huge 28in drawing board, perfectly poised for artistic projects with support for both Surface Pen and the new Surface Dial.

At the top end, should you want to throw as much money at Microsoft as possible, there’s a Surface Studio equipped with an Intel Core i7, a generous 32GB of RAM, 2TB SSD and a 4GB GPU for £4,249. This is an all-in-one for the super-rich.

By this point, Apple’s Retina 5K iMac is beginning to look like a more attractive purchase. The top-specced model, sporting a seventh-generation Intel Core i7 CPU clocked at 3.8GHz, 2TB storage (admittedly not an SSD) and 8GB of RAM will set you back £2,249. That’s £750 cheaper than Microsoft’s entry-level offering. Of course, you can’t tilt the iMac back and draw on it but, for that price, you could buy yourself a 10.5in iPad and Pencil and draw wherever you wanted.

All-in-one Windows PCs, at least recently, have been uninspiring to look at. Microsoft’s Surface Studio is no such thing: its 28in, 3:2 PixelSense display is positively dominating, and its svelte, minimalistic design really draws the eye.

All of its core internals lie in the base, so you get a display that’s just a few millimetres thick, with clean, well-defined edges and rounded corners. It’s all very Apple.

The hinge is what steals the show, though. With it, you can manipulate the screen to whichever angle you see fit, down to just 20 degrees. At this angle, it’s surprisingly comfortable to lean and draw on and the Surface Pen feels just as responsive as it does on the other Surface devices, which means it’s a highly responsive canvas for drawing on. 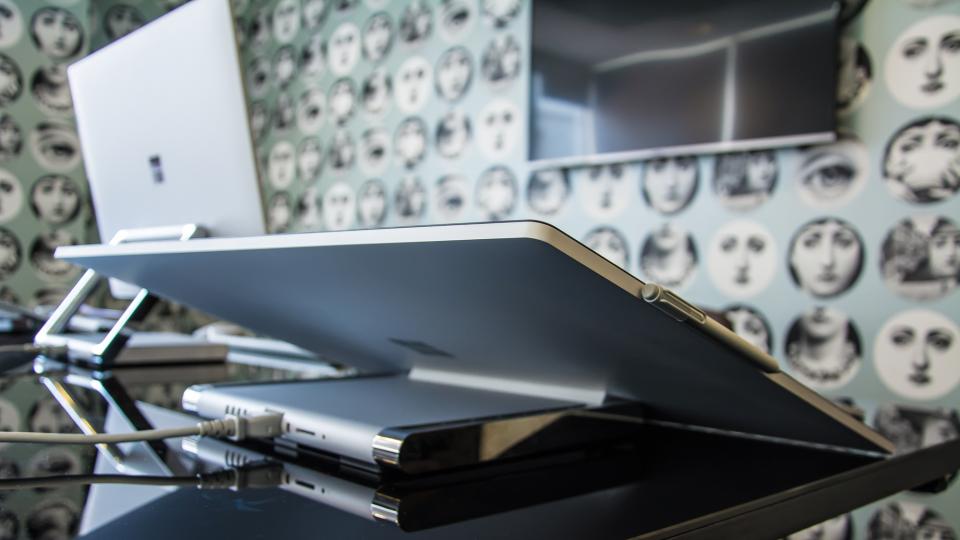 The Studio comes with the Surface Pen and also supports the new Surface Dial. The former has recently seen an upgrade and now has tilt support for shading, matching one of the Apple Pencil’s standout features.

The £89 Dial, too, is a companion worth thinking about. It’s a little knob you place on the screen that twists to provide context-sensitive features in supported apps. You can use it to scroll through a colour wheel, change pencil thickness, zoom in and out, and flit between drawing modes. The best thing about it is that applications can display options around its circumference, showing colour wheels, palettes and other option tools, making it a much more integral part of the experience than anything similar that’s come before it.

Note however that bit about support: applications need to explicitly support the Dial to get the most out of it, although simple stuff such as zooming and scrolling should be supported in most Windows 10 apps. Crucially, although Adobe has demonstrated full support for the Dial, it’s not out yet: once it is, the Surface Studio may well be the best platform for running Photoshop ever created.

The 192ppi, 4,500 x 3,000 display is pixel-perfect – a priceless attribute when digging into the more intricate details of your creations – although it’s not quite as sharp as the 5K iMac’s display. Display modes can be switched on the fly for the picky graphic artist, with sRGB, DCI-P3 and a special Super Vivid colour profile on offer.

The Surface Studio is a classic case of a machine I’d buy in a heartbeat if I could use someone else’s money to do it. Even though I’m by no means a creative type, having a big canvas on which to sketch out ideas really appeals. That it’s also a top-notch, well-designed PC is also a big plus. 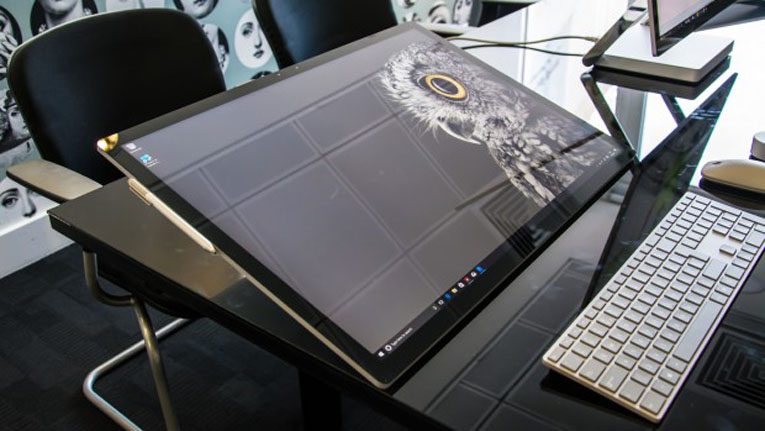 There are two problems, though. First is the price: there’s simply no ignoring the fact that the Surface Studio is expensive. The touch and drawing capabilities mean you’re getting a lot for the money but, if you don’t need to draw, this isn’t the machine for you.

The second drawback is that the iMac still exists and it remains a better option for 95% of people. And that’s principally because it’s the better-value machine.

Overall, my early verdict is that the Surface Studio is a brilliant Windows all-in-one, but unless you’re going to be using the drawing capabilities every single day, you’re better off looking elsewhere. It’s a great attempt, but the iMac is still the king of this category.

Don't miss a deal at Farfetch
Best offers at Mobiles
Discounts, Sales and Deals at Currys
Save your money with Microsoft Store
Online-Shopping with O2 Mobile
Best products at Brian Tracy
Latest Posts