To some, the HDFury Arcana will seem like an overpriced gadget that doesn’t add anything to their home theater setup. For everyone who owns a pre-2019 smart TV and a relatively high-end soundbar capable of decoding object-based soundtracks (i.e., Dolby Atmos or DTS:X), it will be nothing short of a miracle.

The $199 4K Arcana fills a very specific need: As described by the company, the small box enables “full audio to any eARC sound system for up to Dolby Atmos, Dolby TrueHD, Dolby MAT Atmos, DTS:X, DTS-HD Master Audio and older formats.” In layman’s terms, it means a high-end soundbar such as the Sonos Arc will deliver full lossless audio to your soundbar even if your TV doesn’t support eARC.

This is not a rare problem for people who value high-quality audio. While most modern televisions support HDMI ARC (the Audio Return Channel that sends sound from your TV to your audio system over an HDMI cable), ARC doesn’t provide enough bandwidth to carry high-resolution lossless audio formats such as Dolby True HD and DTS-HD Master Audio. A new standard called eARC (Enhanced Audio Return Channel) delivers more than enough bandwidth, but only newer TVs—starting with high-end models sold in 2019—support eARC. Read this story for a deep dive into the two standards. 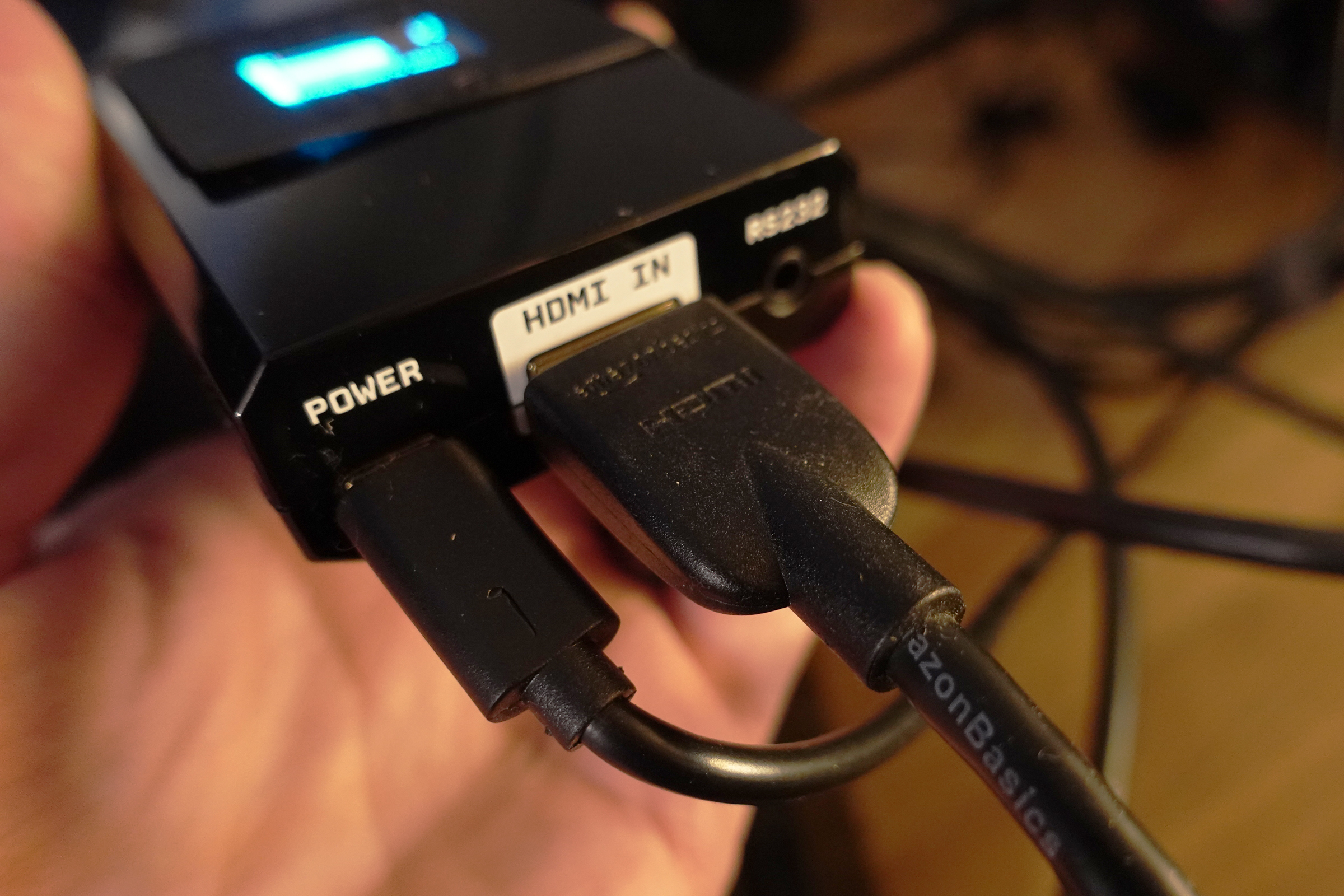 If you’re like me, you’re going to find out the hard way that your home theater system isn’t all that it could be—after you’ve invested hundreds of dollars in a new soundbar. Few things are more frustrating than splurging on an expensive new device only to discover that another component in the chain prevents it from delivering all that it’s capable of. That’s exactly what happened to me: I excitedly set up my new Sonos Arc, put on a movie with a Dolby Atmos soundtrack, and heard only lower-resolution, Dolby Digital Plus. (This Sonos support article explains what’s needed for each audio format).

Granted, it still sounded much better than the five-year-old Sonos Playbar I replaced, but for the price I paid, I wanted nothing less than full 3D spatial sound. And I wasn’t about to replace the 82-inch TV I bought last year just to get eARC support.

That’s when I found the HDFury Arcana, a box specifically designed to address my issue. It has one input and two outputs, one that goes to the Sonos Arc’s HDMI port, and one that goes to my TV’s ARC port. It’s not unlike an external GPU for a laptop—the Arcana upgrades your TV’s ARC port to an eARC one as if you had purchased a brand new set. It’ll even work with TVs or projectors that don’t have a dedicated ARC port, and it solved the occasional lip-sync issues I was having with regular ARC. 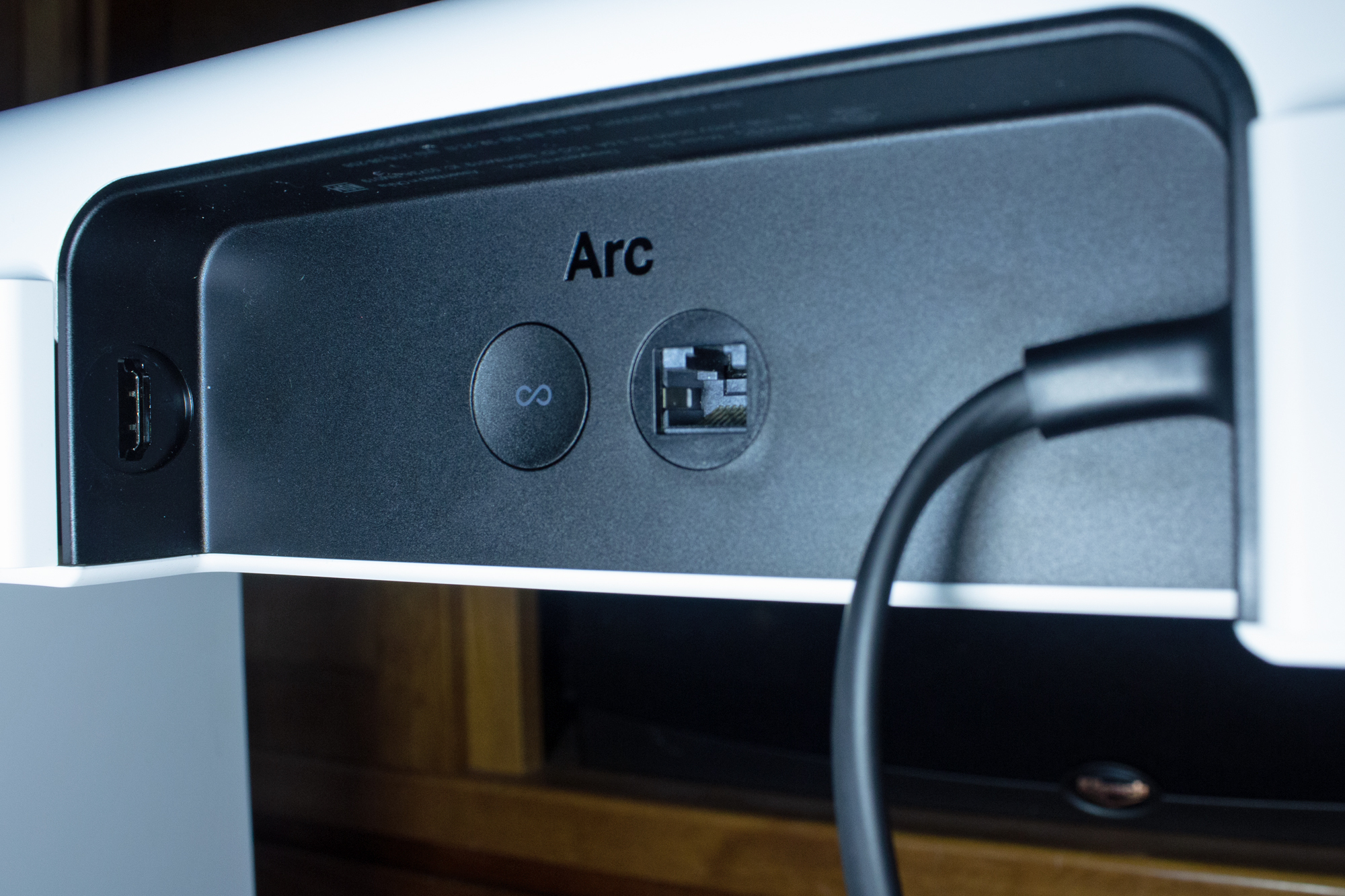 But if you’re reading this, your situation is likely the same as mine: You bought a Sonos Arc to go along with your kinda-new big-screen 4K TV that can’t deliver full lossless Atmos sound to it. And for that alone, The HDFury is well worth its $199 price tag.

Setting up the Arcana is incredibly simple, though it’ll obviously add to the cable clutter behind your TV. The box is small enough to hide, but you’ll need to provide AC power to the Arcana and add another HDMI cable to your collection.

Keep in mind that the Arcana doesn’t come with any HDMI cables, so you’ll need to bring your own; specifically, one labeled Premium High-Speed HDMI, which provides bandwidth of 18Gbps. The cable that comes with the Arc will do the trick, but if you have any issues with sound or picture quality, try swapping out one of your other cables before running other diagnostic fixes. The box has a small OLED display with various menu options and a somewhat clunky navigation wheel, but you shouldn’t have to venture beyond the Audio menu (which will likely stay set to “eArc Only”). There’s also an option for firmware updates when you insert a USB stick. Mine arrived up to date, so I haven’t used it.

If you have only one device to connect, you’ll plug the HDMI cable directly into the Arcana and you’re done. Since that’s not realistic and you probably have more than one device in your setup, the Arcana supports HDMI switches between the box and your TV. I was able to integrate my existing Caavo Control Center and use the full functionality of its remote without an issue. 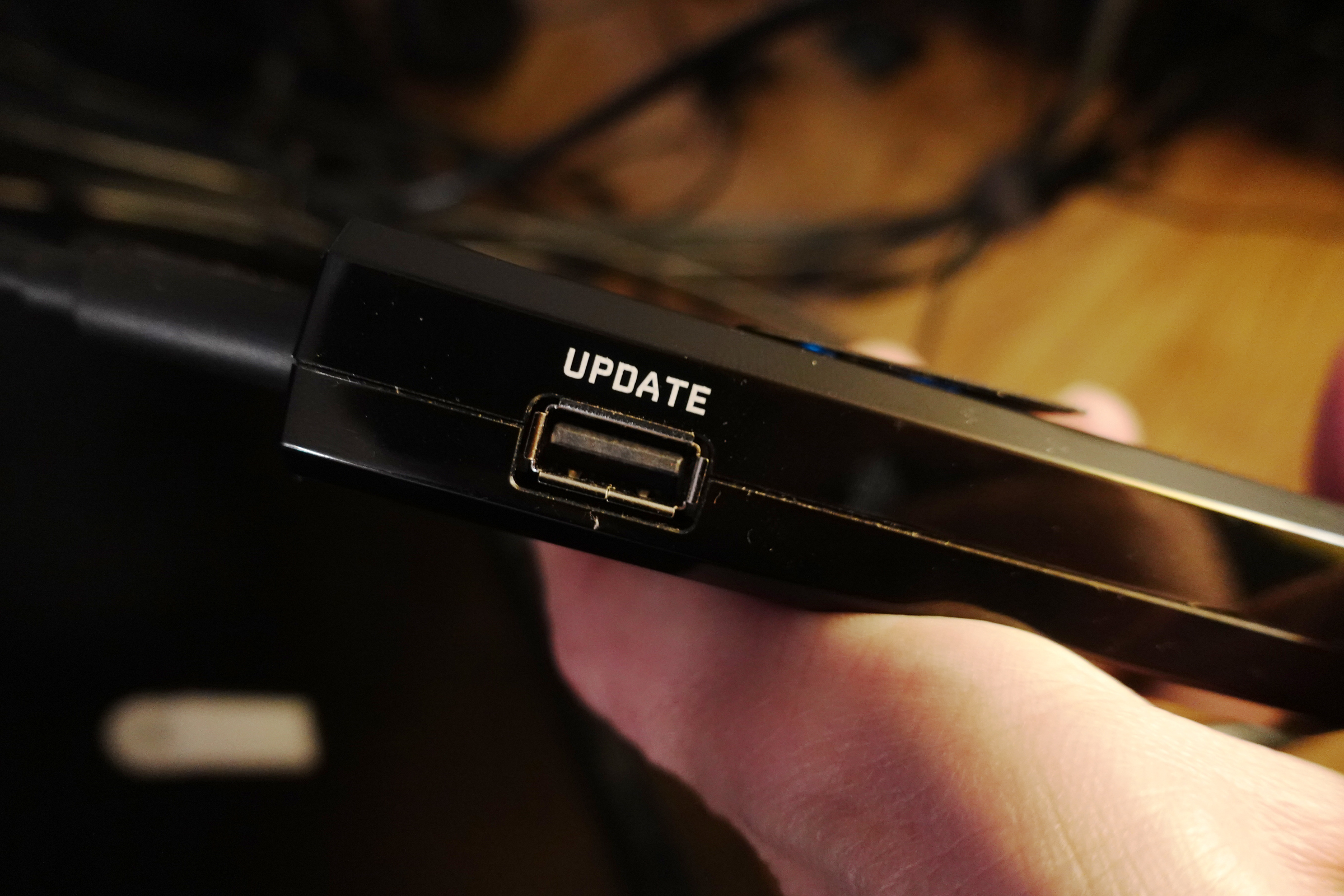 You might also need to reconfigure your 4K UHD Blu-ray player to send the correct audio bitstream to your soundbar. My Sony UBP-X800 player defaulted to PCM 7.1 sound (which is still better than I got without the Arcana), but a quick trip to the settings fixed it. All I needed to do was turn BD Audio Mix off to tell the player the Arc would handle audio decoding.

I have experienced a few quirks with my setup that you might also encounter, but nothing was a deal-breaker. Each time I power on my system, a message from the Arcana appears on the bottom of the TV screen for a few seconds. (Update: HDFury points out that this readout can be turned off by selecting “Off” in the OSD settings menu.) Also, when I play or stop a show within some apps, the screen goes black for a second or so. I’ve tried various settings on the Arcana to fix it, but nothing has helped, so it could be due to my Caavo. At any rate, it’s a minor nuisance. 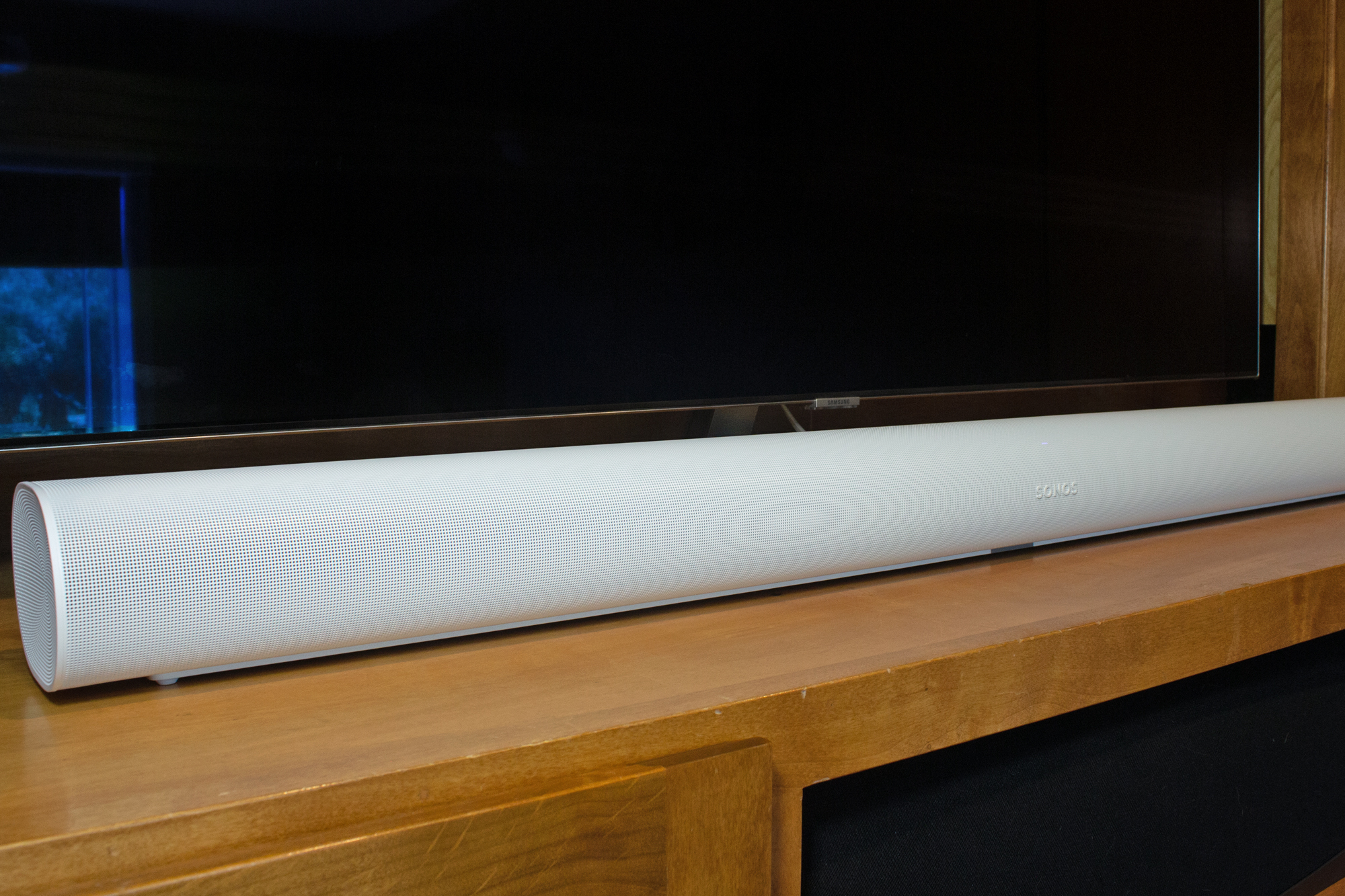 I also lost the ability to control the Sonos Arc using my Caavo remote. My Samsung TV doesn’t recognize the Arc as a receiver like it did when the speaker was plugged directly into an HDMI port on the set, so the TV thinks I’m controlling its internal speakers (and displays “TV speaker” on its screen). All I needed to do was reconfigure the Caavo remote to control the Arc’s volume instead of the TV’s. That took seconds in the Sonos app.

I’ve been using the Arcana as part of my home theater setup for a couple of weeks now, and I haven’t had any issues with connectivity. Nor have I needed to adjust settings or fiddle with anything. When I power on my Caavo, the Arcana sends the proper signals, and when I play an Atmos movie or show, the Dolby Atmos logo appears and I get fully lossless sound from my Blu-ray player. It’s a beautiful thing to see. And hear.

At $199, the HDFury Arcana isn’t cheap, but it’s well worth every penny to unlock the Sonos Arc’s full potential on non-eARC TVs.

Don't miss a deal at Vodafone UK
Best offers at Carphone Warehouse
Discounts, Sales and Deals at House of Fraser
Save your money with Vimeo
Online-Shopping with Currys
Best products at Argos
Latest Posts