The Moto Z2 Force is back with its guaranteed shatter-resistant glass screen and even more MotoMods like a gamepad and 360-degree camera. But this time it’s much thinner and available on more carriers. You’re going to pay a price to upgrade to this Android phone, but it’s the only modular phone in town these days.

The Moto Z2 Force stands out in a world of status quo Android phones in 2017, successfully delivering more MotoMod accessories to upgrade your phone.

It’s a combination of last year’s ultra-thin Moto Z and the shatter-resistant Moto Z Force. It remains thin and light, but still includes that hard-to-break screen.

Remarkably, it’s redesigned 13% thinner and 12% lighter than last year’s Z Force and has been given a 7000 series aluminum unibody design. It comes in colors Lunar Gray, Super Black and Fine Gold, each with a brush metal finish. 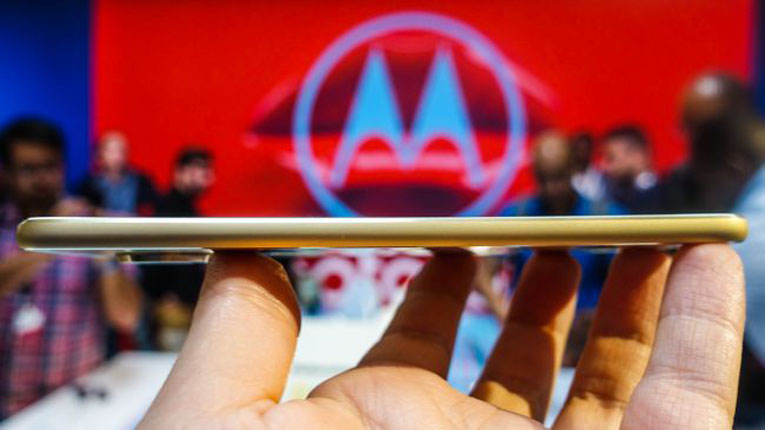 Stronger metal goes hand-in-hand with the five-layer assembly that gives this phone its shatter shield glass powers. The fingerprint sensor, the other form of protection, is now wider and can double as the back and recent buttons with swipes for clever one finger operation. 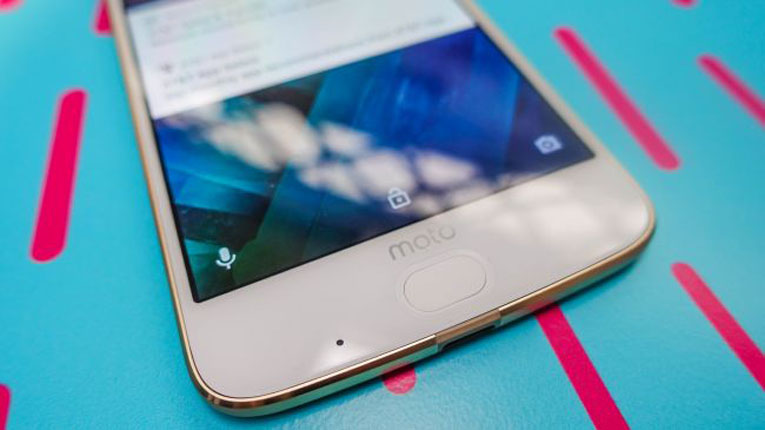 However, you’re not going to find a waterproof phone here. Motorola touts a hydrophobic nanocoating inside and out, but it’s meant to protect against the ran, not accidental dips in the pool like a Samsung Galaxy S8.

You’re also going to miss out on any sort of normal headphone jack. While the Moto Z Play and Moto Z2 Play both have one, this port is absent on the Z2 Force.

In our brief time with the Moto Z2 Force, the 5.5-inch Super AMOLED display looks just as good as it did last year with a Quad HD resolution that’s fit for Google Daydream VR.

On the inside, it’s equipped with the latest Qualcomm chipset, the Snapdragon 835 with 4GB of RAM (it’s 6GB in UK and Australia). The battery is touted as all-day battery life, so we’ll have to confirm the size and longevity in additional tests. 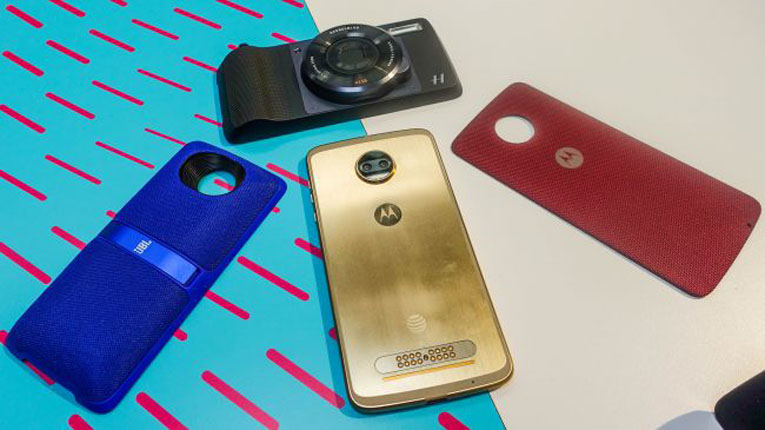 The Moto Z2 Force has dual rear cameras with two 12MP cameras that include two forms of rapid focus technology: both phase detection and laser autofocus. It’s supposed to work at 5m, even in the dark. 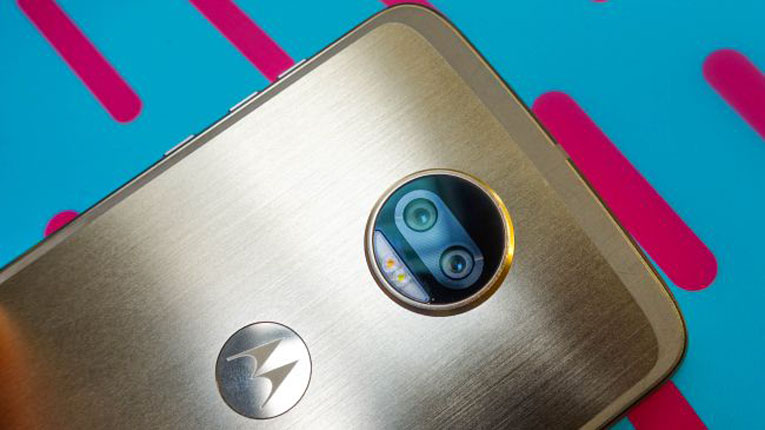 Moto Display lets you preview and interact with notifications and wave your hand over the display to wake the screen. New this year is quick reply, so you can interact with messaging notification and reply without opening up an app. You can also open up a map if someone stick an address in a message, sort of like 3D Touch.

Here’s where you might find the Moto Z2 Force to be better than the Samsung Galaxy S8 and Galaxy S8 Plus – MotoMods. 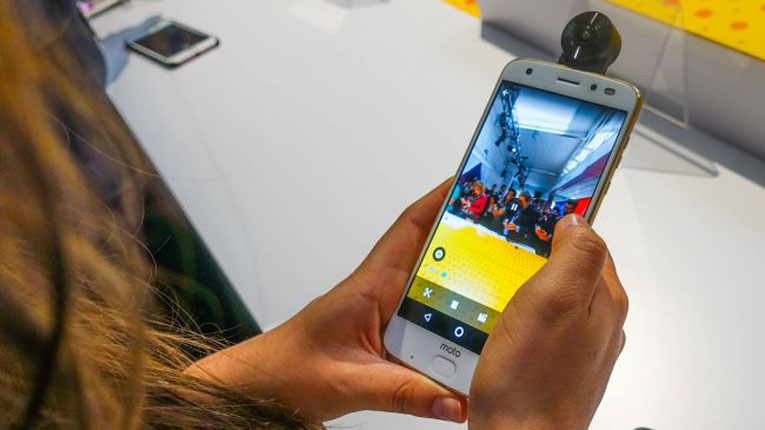 These are magnetically connected accessories that snap onto the back of the Moto Z2 Force, just like they did on last year’s phones. The Z2 Force is backward compatible with older Mods, including the Insta Projector (that’s the fun pico projector), 10x Hasselblad camera and JBL speaker. 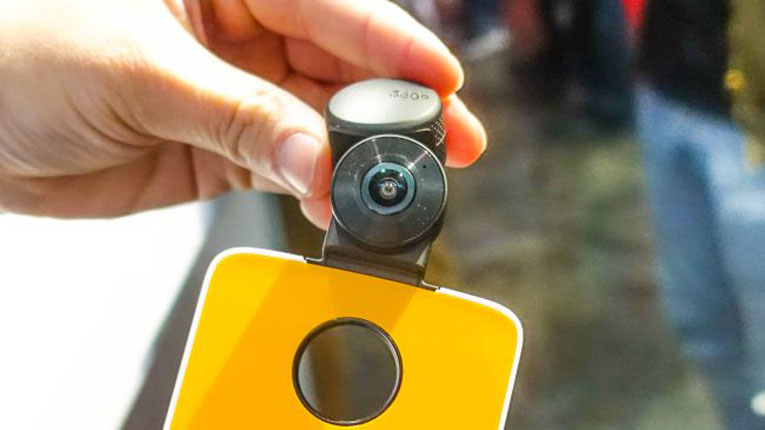 There are two new MotoMods alongisde the new Moto Z2 Force launch: an easy-to-use 360 camera and gamepad. Both are great.

The Moto Z2 Force gamepad wants to turn your Android phone into a Nintendo Switch of sorts, and it already has a built in library of games thanks to the Google Play Store. Heck, there’s even Super Mario Run if you want to get as close as possible to a Nintendo console. 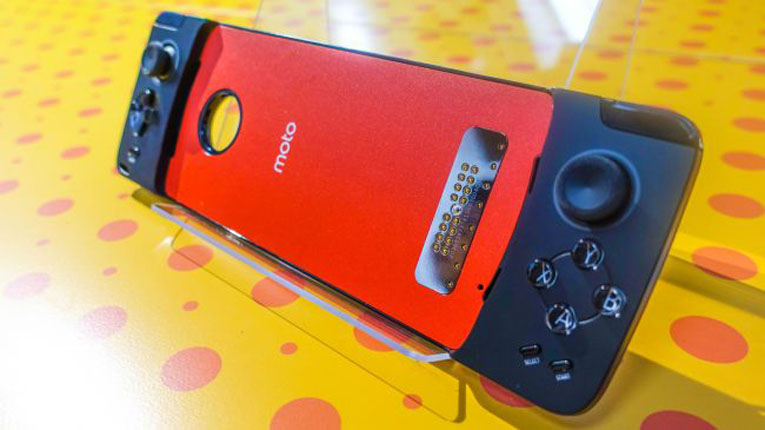 The 360 camera is a trendy new piece of tech that can take pictures and video all around you. It puts a little camera head on the top of the phone with lenses on both sides and instantly connects to the phone.

We like this for two reasons. There’s no Bluetooth pairing issues this way and the power is drawn from the phone. Syncing 360 cameras and keeping them charges is a pain, and with the Essential Phone delayed, MotoMod may be the first phone maker to launch this idea.

Moto Z2 Force is coming to the US first, with broader carrier availability than before. The first Force phone was a US Verizon exclusive. 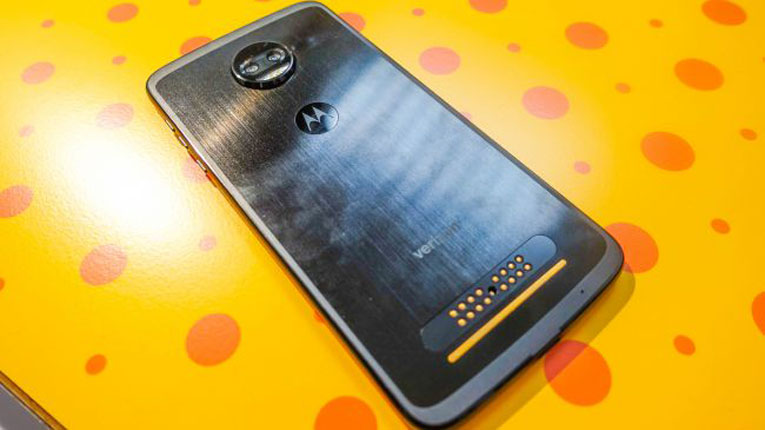 Motorola is doing the exact oppsite of that in 2017, launching it on August 10 on US carriers AT&T, Sprint, Verizon, T-Mobile, US Cellar as well as at Best Buy.

The Moto Z2 Force UK release date is slated for “later this summer,” according to Motorola, and we should see the same launch window for Australia. 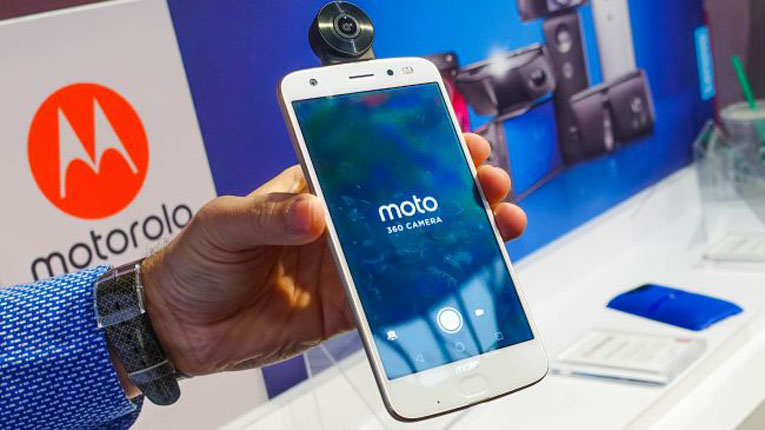 It’ll cost $30 a month through carriers and through Motorola it’ll be $799 unlocked through their website. Yes, you’ll have to pay more for the unlocked version. You can however, get a free MotoMods credit with pre-order and snag yourself an Insta Projector MotoMod.

Don't miss a deal at Marks and Spencer
Best offers at Argos
Discounts, Sales and Deals at EE Mobile
Save your money with Argos
Online-Shopping with Groupon
Best products at Virgin Media
Latest Posts