The Apple AirPods Max are the tech giant’s first over-ear headphones, and so far we’re impressed with the audio quality and noise cancellation – but we’re not entirely sure that the design, and the absence of a 3.5mm audio port justifies the high price tag.

The Apple AirPods Max are the most hotly-anticipated headphones launch of 2020, and after years of speculation and rumor, they’re finally here.

They were quietly announced via a press release posted on the Apple newsroom. According to Apple, the AirPods Max boast “incredible high-fidelity audio, Adaptive EQ, Active Noise Cancellation, and spatial audio”, like the AirPods Pro.

Since their launch, the unusual design of the Apple AirPods Max and their accompanying case have divided opinion – but then again, so did the original AirPods when they launched in 2016.

We’ve spent a little time getting to know the wireless headphones, and we’ll be updating this guide as we uncover more in the run up to our full AirPods Max review; and so far, while we’re impressed by the sound quality and the noise cancellation, we’re not entirely convinced that they justify their high price tag.

However, expected stock shortages mean you may struggle to get the AirPods Max before the end of the year, whether you’re buying from the Apple Store or third-party retailers.

That price makes the AirPods Max far more expensive than many of the best over-ear headphones on the market, including our current favorite cans, the Sony WH-1000XM4; anyone hoping for a budget-friendly price, as we saw with the recently-launched HomePod mini, will be disappointed.

There are rumors that Apple is planning to release a cheaper, sports-friendly variant of the AirPods Max, but even then you can expect those to cost a pretty penny. 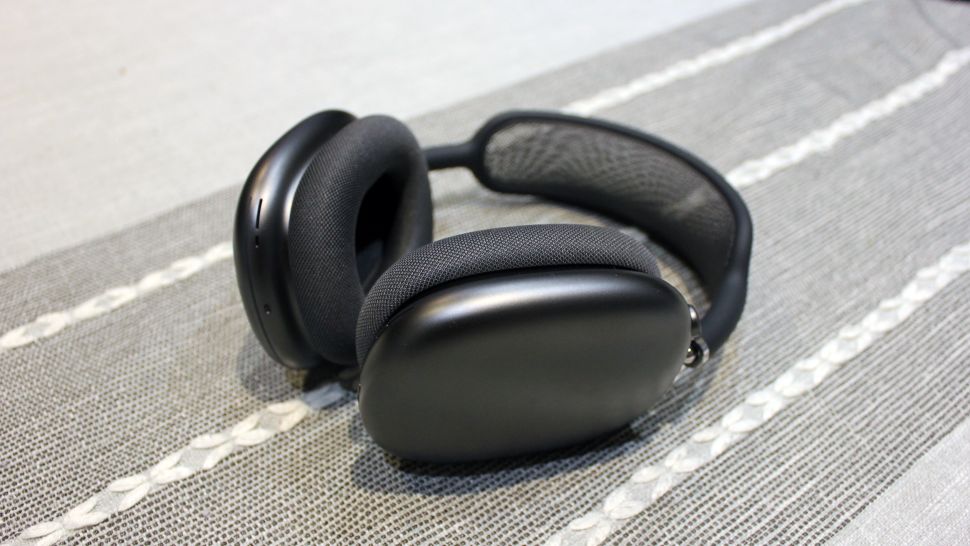 The Apple AirPods Max come with a minimalist design that’s typical of the tech giant, with sleek lines and a stainless steel build. They come in a range of stylish colors, including space gray, silver, sky blue, green, and pink.

We tested out the space gray model, and we think they look nicely understated – aside from the rather unusual headband.

The headband is made from a knitted mesh fabric, which Apple says is “designed to distribute weight and reduce on-head pressure”. While we’re not entirely sold on the look of the mesh headband, but we can’t deny that the AirPods Max did feel comfortable to wear – and the headband isn’t nearly as conspicuous when the headphones are actually on your head, which is the most important thing.

The headband frame itself is made from stainless steel, with telescoping arms that you can adjust to find a good fit. The frame feels sturdy and well-made, but it’s not so heavy as to put pressure on your head.

The memory foam earcups also feel quite comfortable. Apple says they’re attached to the headband with a mechanism that “balances and distributes ear cup pressure, and allows it to independently pivot and rotate to fit the unique contours of a user’s head”. 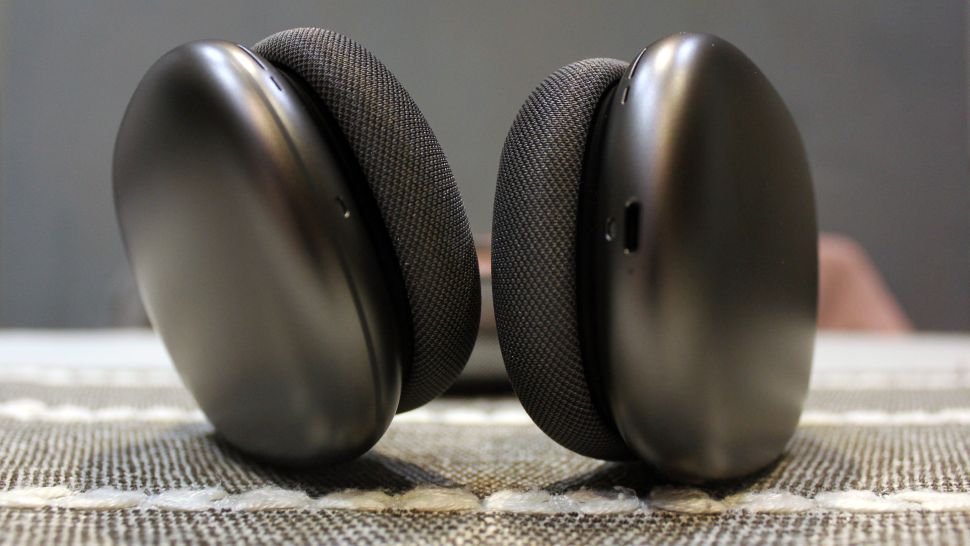 The on-ear controls on the AirPods Max are minimal; interestingly, Apple has reprised the Digital Crown dial of the Apple Watch, which it says enables precise volume control, as well as allowing you to play or pause audio, skip tracks, answer or end phone calls, and activate Siri.

You can simply turn the dial on the top of the right earcup to adjust the volume, or press once to play / pause your music, press once to answer and end phone calls, press twice to skip to the next track, and press three times to skip backwards.

We liked the tactility a dial provides, and it definitely feels like a more precise way of adjusting the volume as opposed to a button or swipe controls. In fact, we’re quite pleased that Apple hasn’t opted for touch-sensitive housings; in our experience, they can be temperamental, and it’s tricky to remember all those different gestures.

The right earcup also houses a noise control button that allows you to switch between active noise cancellation and Transparency mode, which allows some environmental noise to pass through the headphones, while the bottom of the earcup houses an Apple Lightning port for charging.

It’s annoying that this doesn’t come included with the headphones when you consider how expensive they are. 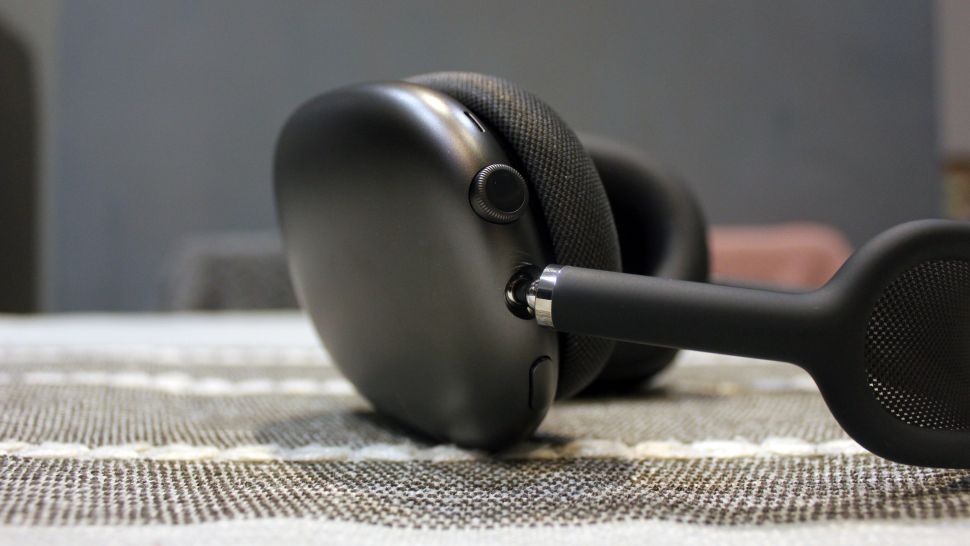 Included with the AirPods Max is an unusual-looking Smart Case, which puts the headphones in an ‘ultralow power state’ which Apple says helps to preserve battery charge when the headphones are being used. The Smart Case has so far been compared to a bra, a sleeping mask, and a handbag by bemused Twitter users.

It’s made from a rubberized material, and it wraps around the earcups of the AirPods Max and snaps in place magnetically, leaving the headband exposed, which adds to the ‘handbag’ look. The case also leaves the Lightning port exposed, so you can charge the AirPods Max without taking them out of it.

While we appreciate the fact that the case puts the AirPods Max into a low-power state, we’re not sure it will do much to protect them if you want to pop them in a backpack while not in use. There’s nothing to stop debris from reaching the headphones, and at this price we’d really expect a hard case that will reliably protect the AirPods Max from damage. 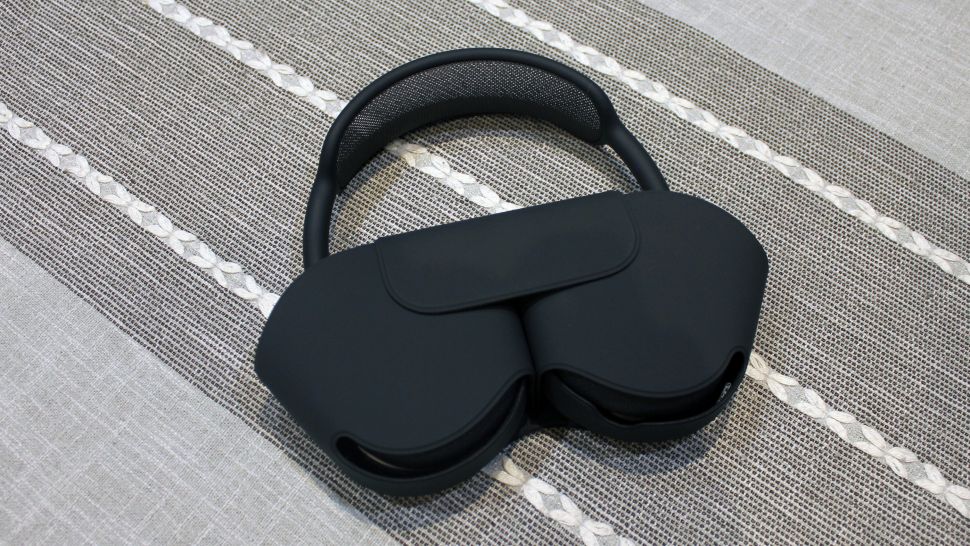 While we’ll need to spend a little more time with the Apple AirPods Max to make a true assessment of the audio quality on offer, we’re impressed by what we’ve heard so far.

Listening to Little Simz’ Selfish, we found the bass was warm and powerful, but tightly controlled enough so as not to bleed into the other frequencies. Romantic sweeping violin flourishes sounded sweet and clear, while Simz’ vocal was smooth and prominent in the mix.

The soundstage generally feels quite wide, with room for all the instruments to really shine; you don’t get that ‘closed-off’ sensation that over-ear headphones sometimes impart. There’s plenty of detail, great imaging, and we didn’t notice any issues with rhythmic accuracy in the short time we spent listening with the AirPods Max.

Inside the headphones are 40mm dynamic drivers, which are powered by a dual neodymium ring magnet motor that, says Apple, allows the AirPods Max to “maintain total harmonic distortion of less than 1% across the entire audible range”. They certainly sound clear, and we didn’t notice any distortion, even at higher volumes. 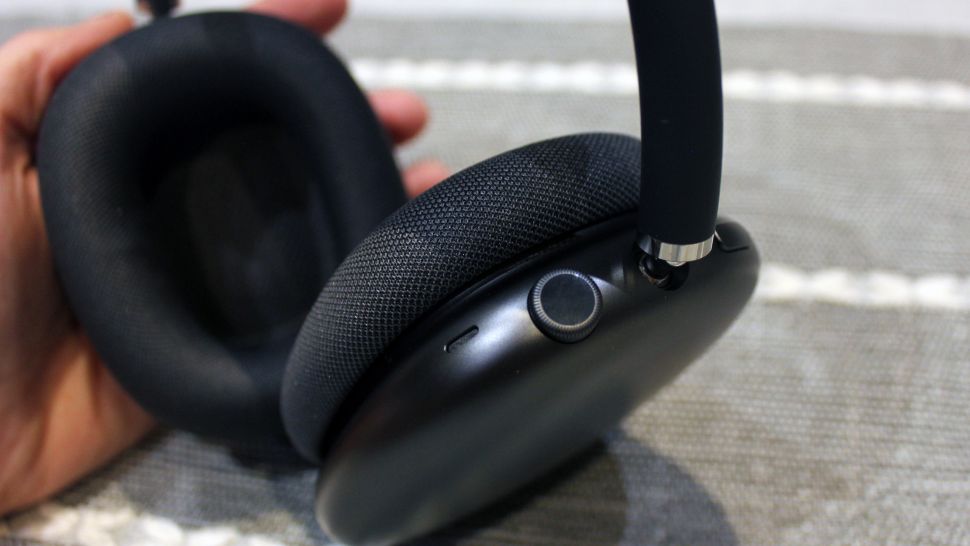 Despite the high price of the AirPods Max, support for Hi-Res Audio files is limited to Apple’s own Apple Digital Masters tracks, which are only available via Apple Music. Again, this makes it feel as though we’re being somewhat shortchanged, as we’d expect comprehensive codec support at this price.

Like the AirPods and AirPods Pro, the AirPods Max come with the Apple H1 chip in each earcup, which features no less than 10 audio cores to allow for Adaptive EQ, active noise cancellation, Transparency mode, and spatial audio.

Released as part of iOS 14, the Spatial Audio feature first came to the AirPods Pro, and works in 5.1, 7.1 and Dolby Atmos, which positions sound all around you within a virtual sphere – this means that, for example, if you’re watching a Dolby Atmos film that shows a plane flying overheard, it will sound as though the plane really is passing above you.

We’re yet to test this feature out, but it could give the AirPods Max an edge over other premium headphones that don’t offer support for object-based audio, as well as making them ideal for watching movies. 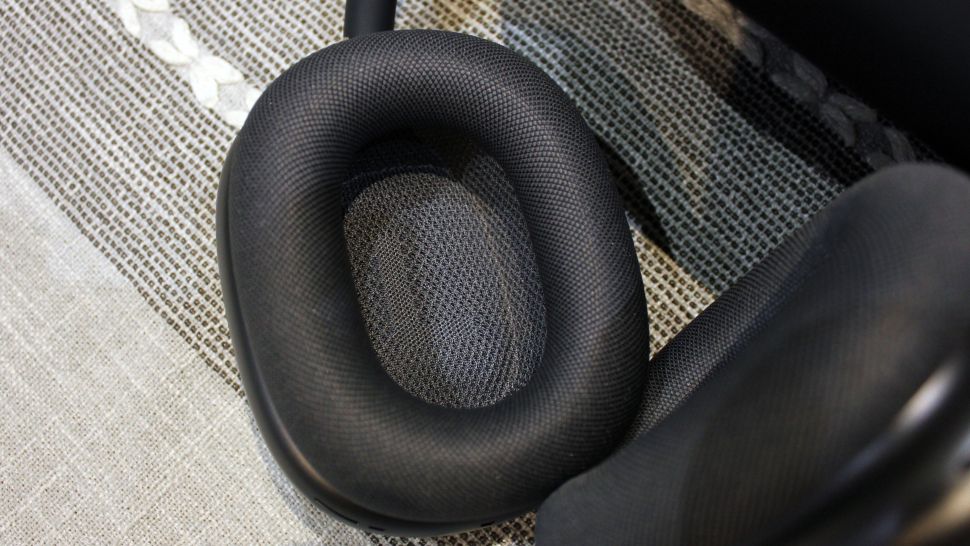 Apple says the AirPods Max provide up to 20 hours of high-fidelity audio, talk time, or movie playback, which ordinarily wouldn’t seem a huge amount; however, given that this is with Active Noise Cancellation enabled, it’s a pretty respectable figure.

The best over-ear headphones will usually hit around 30 hours of battery life, although many very good models only make it to around 20 – either way it’s enough for a full day or two’s use, depending on how wedded they’ll be to your ears.

Connectivity comes courtesy of Bluetooth 5, so you can expect pairing times to be fast, and you shouldn’t lose your connection as you move away from your source device (as long as you don’t go further than 800 feet / 420 meters, or put several thick walls between the AirPods Max and your phone). 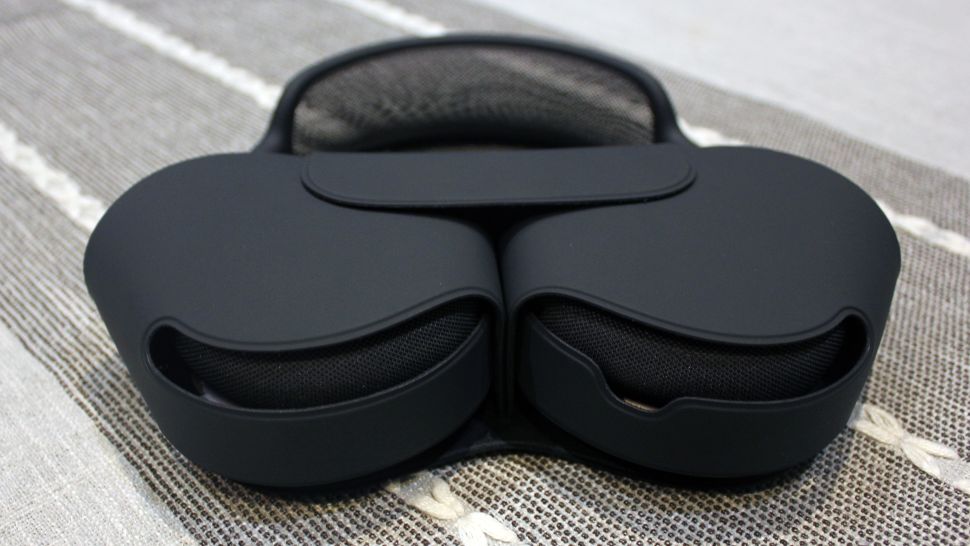 As we’re initially testing the AirPods Max using an Android phone, we weren’t able to try out some of the Apple-specific features that come with the H1 headphone chip.

The Automatic Switching feature will enable users to easily switch between iPhone, iPad and Mac when jumping between music listening and taking calls, while one-tap setup will mean you can get up and running with your new cans pretty swiftly. You’ll also be able to share audio between two sets of AirPods from pretty much any Apple source device – even Apple TV 4K or the iPod Touch – so you and a friend can listen to the same music simultaneously.

As ever, Apple has included support for its smart assistant Siri too, meaning you can use voice commands to play music, make phone calls, adjust the volume and get directions when you’re on the move, among other things. Siri can also read your incoming messages. 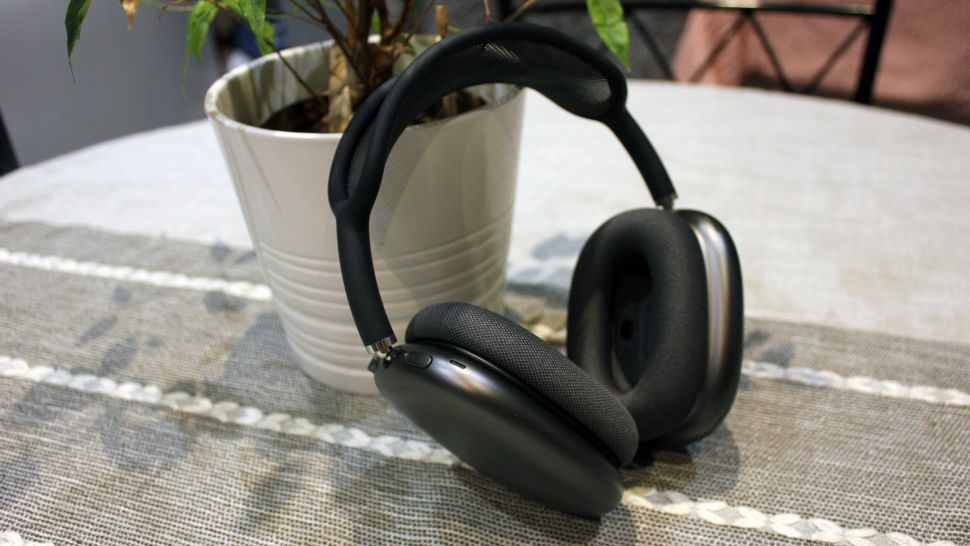 The noise cancellation provided by the Apple AirPods Max seems strong based on the short time we’ve spent with them.

Each ear cup features three outward-facing microphones to detect environmental noise, while one microphone inside the ear cup monitors the sound reaching your ear.

Apple says the AirPods Max use computational audio to continuously adapt their noise cancellation performance based on “the headphone fit and movement in real time”.

Sitting in our kitchen, we were unable to hear the roar of our washing machine or the noise of builders drilling in the road outside – a little environmental noise came through, but it wasn’t enough to ruin the listening experience.

We also tested the AirPods Max out during a commute; most of the rumble form the train was blocked out, and with music playing, we couldn’t hear it at all.

The Transparency mode is useful, too; you just need to press the noise cancellation button on the right earcup to allow environmental noise to pass through the headphones, allowing you to tap into your surroundings. It’s certainly handy if you need to have a quick conversation with someone without having to stop your music, and it worked really well in our tests.

Until we’ve been able to spend more time testing the Apple AirPods Max, it’s hard to give a true assessment of their performance – and whether that performance justifies their high price tag. In particular we’re yet to try out the Spatial Audio feature.

So far the audio quality has impressed us, with a wide, well-balanced soundstage, rich bass, and detailed trebles. We’ve also found the noise cancellation to be very effective, and the inclusion of a Transparency mode is certainly useful.

Design-wise, we’re less convinced. We like the sleek feel of the earcups, and the mesh headband does feel comfortable, but we’re not sure the AirPods Max have the stye credentials of other high-end models like the Bowers & Wilkins PX7 or the Bose Noise Cancelling Headphones 700. Still, we do appreciate the use of physical controls, and the nod to the Apple Watch with the Digital Crown is a nice touch.

Is that enough to convince people to part with $550 / £550 / AU$899? Like we say, we’ll have to spend more time with the AirPods Max to find out, but our gut instinct tells us that these headphones will probably only appeal to hardcore Apple fans, while brand-agnostic audiophiles will likely spend their money on cans that come with all the fixings, cables and all.

Don't miss a deal at Argos
Best offers at Intuit Small Business
Discounts, Sales and Deals at Ticketmaster UK
Save your money with Surfdome
Online-Shopping with Myprotein
Best products at Udemy
Latest Posts