The Beats Flex bring the brand-name wireless headphones to the masses at a lower price, but it’s not without making some big sacrifices in sound quality and design. We don’t love them as much as the top-tier AirPods Pro or even the Powerbeats Pro, but if you just bought a new iPhone and want a pair of affordable Beats earbuds to go with it, the Flex could fit the bill.

Six months out from the launch of the Beats Flex and we still feel the same way about them: they’re affordable, but still premium, earbuds from Beats. They have traditional Beats sound with a traditional Beats design and many of the same features of other Beats headphones, but at a quintessentially non-Beats price.

Some of those included features are the Apple W1 Wireless Chip; a built-in sensor for auto-play/pause; a 12-hour battery life with Fast Fuel and, our personal favorite, a laser cut micro-venting chamber to reduce in-ear pressure.

On paper, the Beats Flex are a great deal – but, spend some time with them, and you’ll understand why the price is what it is.

The Beats Flex were announced on September 13 2020, the same day as Apple’s iPhone 12 event, and launched in two colors – Beats Black and Yuzu Yellow – on Apple’s website October 21, before hitting all retailers on November 20.

The price for the Beats Flex is set at $49.99 (£50, around AU$70) which makes them the cheapest wireless earbuds the company’s ever launched, costing even less than the wired urBeats3. There are still some decent alternatives out there in that price range (see: Optoma Nuforce BE4 or OnePlus Bullets 2) but they’re pretty affordable for the usually premium brand.

It’s also worth noting that, with Apple removing the pack-in headphones from the latest iPhones, the Beats Flex are the obvious choice for folks who need a pair of earbuds – and if you’re only buying them for that reason, well, the Flex are a decent alternative to Apple’s usually lackluster pack-in earbuds. 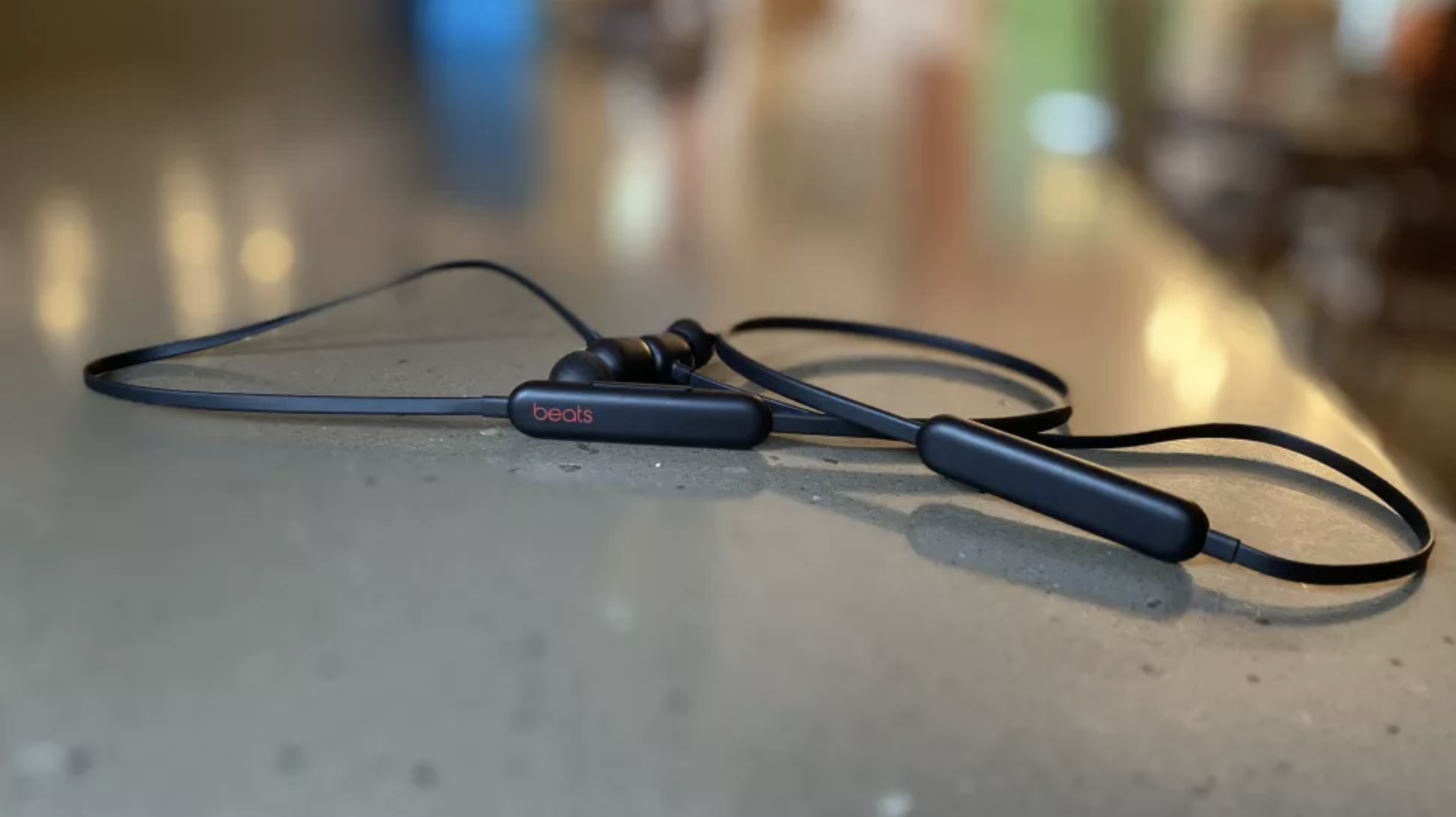 Although Beats hasn’t said it to us directly, the Beats Flex seems to be a direct sequel to the older BeatsX Headphones that it released in 2016. Both are wireless (but not truly wireless like the Powerbeats Pro or Apple AirPods) and look identical.

The earbuds themselves are actually fairly light (18.6g), but the cord that runs between them is about 32 inches and wraps around the back of your neck. It’s a bit cumbersome having such a long cord wrap around your neck and, admittedly, having the two earbuds connected via a cable isn’t exactly what we’d consider the ideal solution in 2020.

That said, the cable isn’t without its advantages: first and foremost is the fact that they’re harder to lose than fully wireless earbuds. The second is that the wire between the two buds can provide a home to in-line volume controls, a multi-feature button and a bigger battery, allowing the headphones to last longer between charges.

What about a play/pause button? Well, you can use the multi-feature button, but the Beats Flex are also equipped with a sensor that will automatically pause the music when you take them off, and resume the music when you put them back on. Not only is that handy, but it can save you a ton of battery life, too. 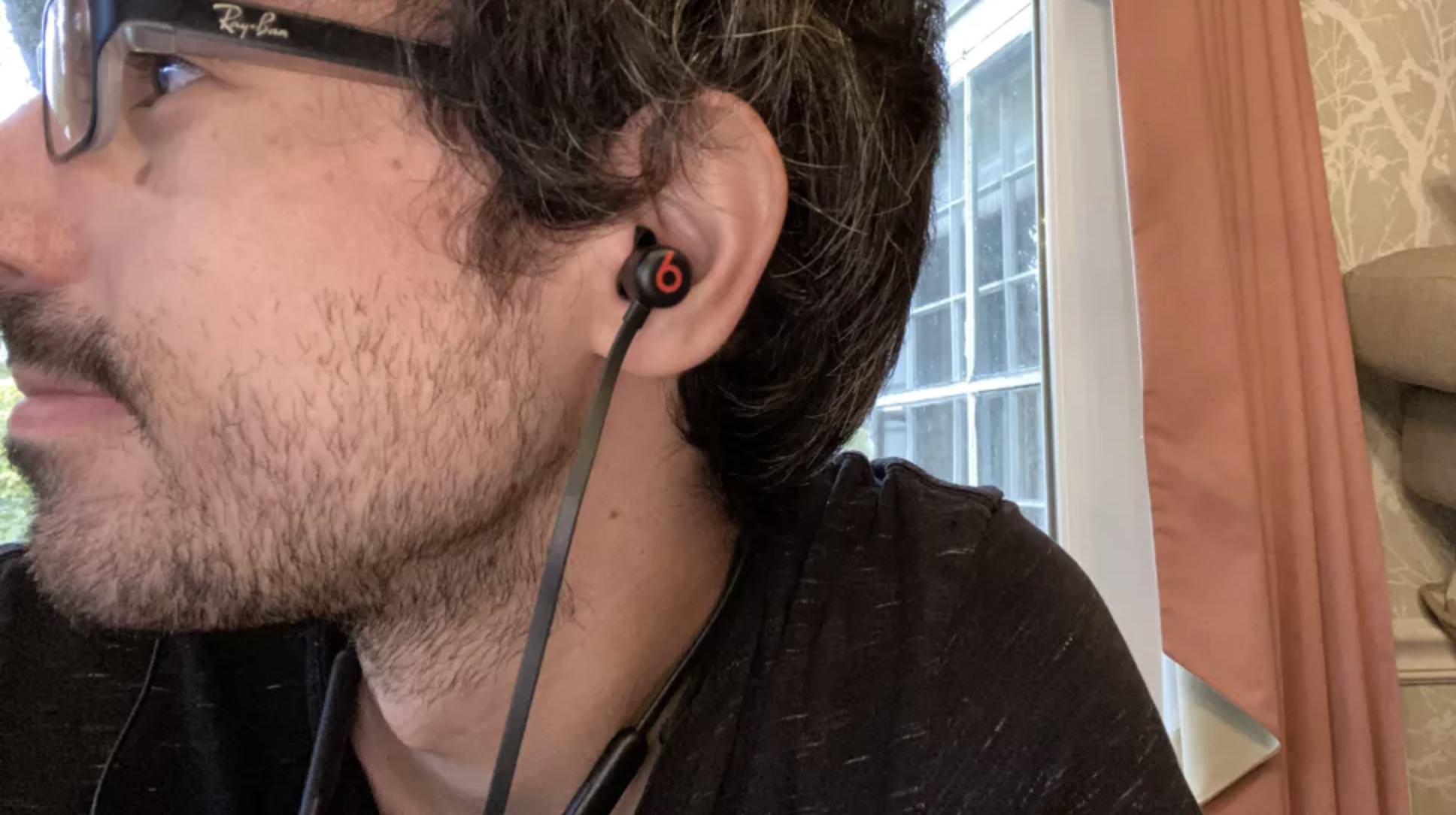 Speaking of, charging is done through a USB-C port on the left side of the earbuds near the volume controls. According to Beats, the headphones have a 12-hour battery life and fast charging that can provide an hour-and-a-half of playback off a 10-minute charge.

The difference between the Beats Flex and more expensive Apple wireless earbuds like the AirPods Pro is that the latter uses the newer H1 Wireless Chip that enables hands-free Siri while the former uses the older W1 Chip. Besides hands-free Siri, the more expensive H1 Chip supports Bluetooth 5 versus the W1’s Bluetooth 4.2, which means you’ll get a slightly longer battery life with the H1 Chip, too.

Surprisingly, though, we didn’t find any of that to be a deal-breaker. The W1 Chip is less advanced than the H1 but it still gets the job done, and the semi-wireless form factor is manageable if a little unwieldy. In fact, so far, the biggest fault of the Beats Flex’s design is that they don’t come with wing tips to secure them in your ear – without them, getting that perfect seal can be finicky and can come undone easily.

On a positive note, the Beats Flex does come with a few different eartips – including some large and double-flange tips – that can help make finding the perfect fit a little easier. 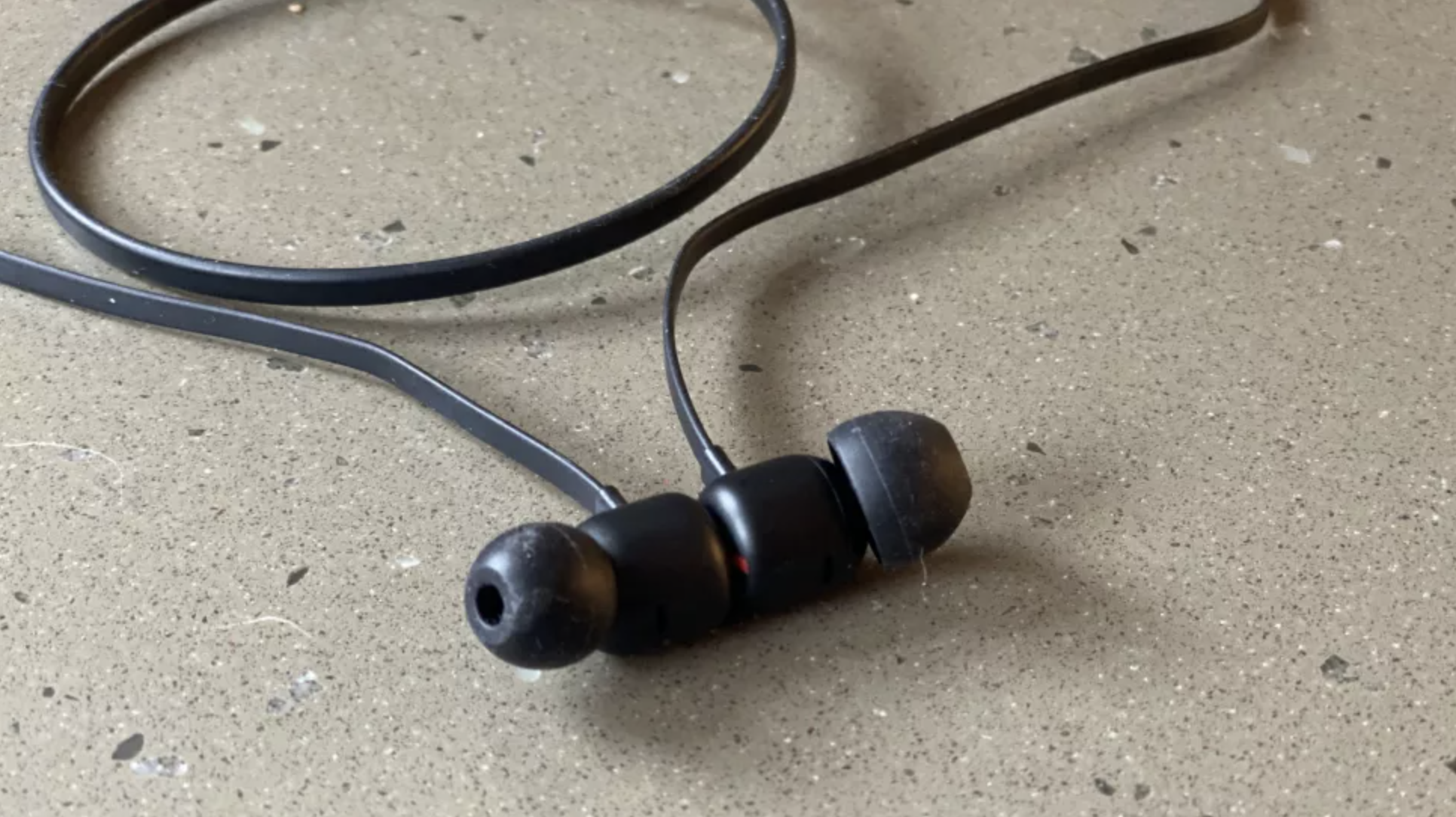 After trying a few combinations of eartips we eventually landed on a decent seal and were finally able to test out the Beats Flex’s audio quality. What we heard is pretty much what you’d expect – a deep v-shaped sound that accentuates the highs and lows of the audio spectrum at the expense of the mids.

In our two weeks with the headphones we listened to a bunch of songs on Amazon Prime Music and Spotify, and have a good idea of what you can expect in terms of sound quality. What we found was that the sound quality was actually relatively clear for a pair of in-ear drivers, however they don’t have a very large soundstage to the audio. Thankfully, there wasn’t any drop out or delay in the audio during our testing, which can be a problem with wireless models, so that stability is a huge boon for the Beats Flex.

While all songs mostly had the same steep v-shape, a few examples worth calling out were bass-heavy classics like Rick James’ Super Freak and the treble-rich Jackson 5’s ABC that truly exemplified the rich treble and chunky bass. Unfortunately these songs also highlight how anemic the mids sound, so proceed with caution. On that note, there’s also no real way to tweak the EQ if you’re not happy with the default sound – which is a bit of a bummer.

Now, if you’re using the Beats Flex with an iOS device, you’ll get prompts to sync them to your Apple ID and iCloud – which, in total, takes under a minute. But if you use Android, you’ll have to pair them like a regular pair of Bluetooth earbuds which not only takes a bit longer but will impact the sound quality as the Beats Flex doesn’t support high-end audio codecs like aptX or aptX HD –all you’ll find here is SBC and AAC. 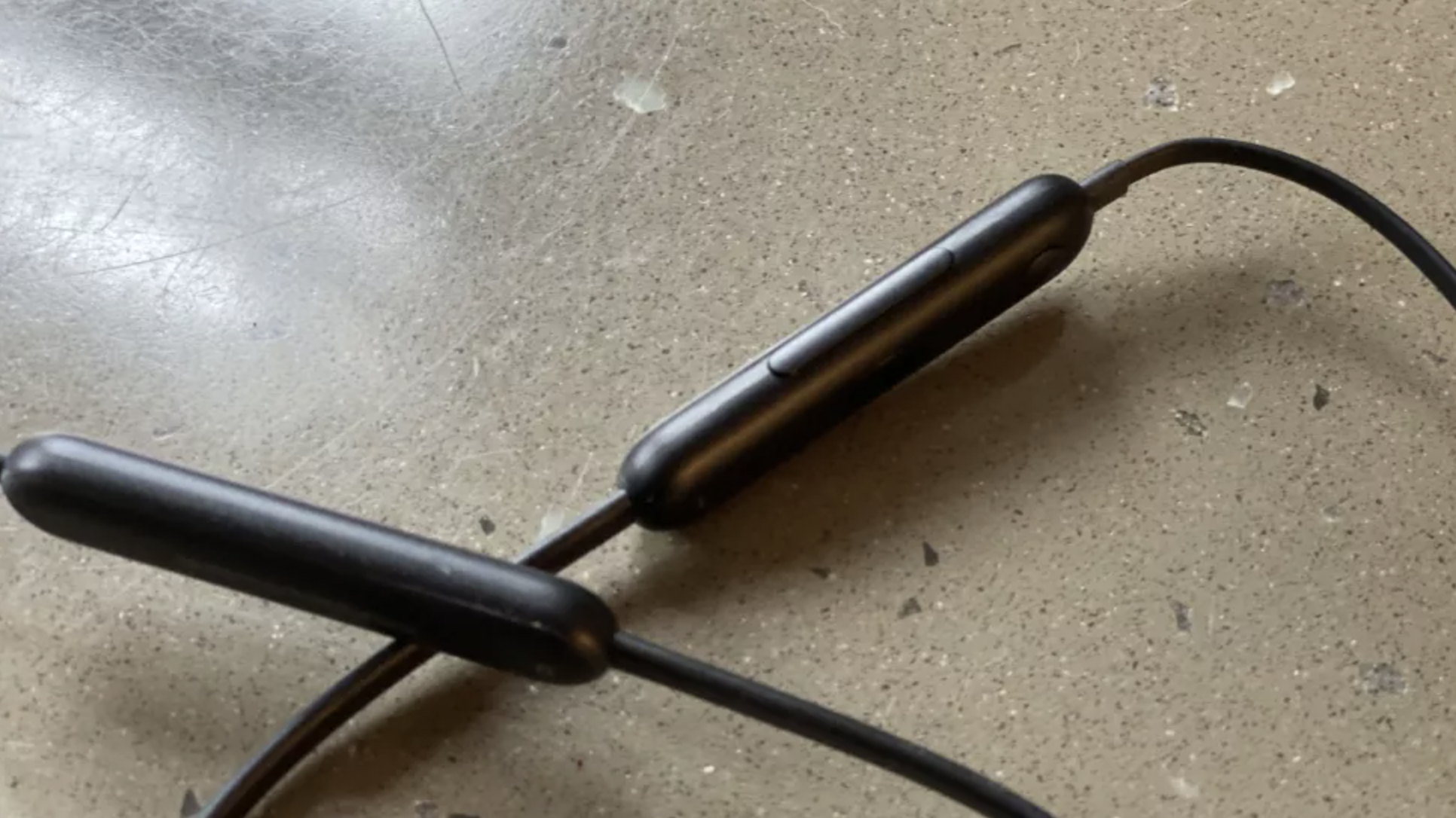 It goes without saying, but at this price the Beats Flex also doesn’t offer noise cancellation, either. The right eartips can help provide some passive noise isolation by sealing off your ear canal, but there’s no fancy noise-cancellation tech inside of them to block out unwanted noise on your next plane flight.

The good news here is that people we spoke to with the earbuds on said we sounded great – even better than we did over speakerphone or other headsets. That’s a huge feather in the Flex’s cap and could make them great work-from-home or out-on-the-town headphones.

You also can’t knock them for their battery life: you’ll get a little less than 12 hours of use per charge, and charging only takes about an hour or two. That said, if you need some quick charge just to get from work back to the house, Fast Fuel (Beats’ name for fast charging) does provide an hour-and-a-half of battery life from only a 10-minute charge.

The last feature that’s worth pointing out is that the Beats Flex – like all W1 or H1 Chip headphones – will have iOS’s new audio sharing feature that allows you to share music between two pairs of headphones. It’s not a killer app by any means, but it is nice if you’re in a house with multiple Apple or Beats headphones and like to share music.

Should you buy the Beats Flex?

You need a cheap pair of headphones for your new iPhone

With Apple removing pack-in earbuds from new iPhone boxes, the Beats Flex are a fairly obvious replacement if you need a pair of headphones.

You love Beats and want a second pair of wireless earbuds

If you know you love Beats’ sound quality and already own a pair of better earbuds from the brand, the Flex are a solid second alternative that you can throw in a bag and take with you. At $50 (£50, around AU$70), you won’t feel bad if you lose them, and they offer most of the same features as other, more expensive Beats buds.

If you can’t remember to charge your headphones, the Beats Flex with Fast Fuel is a good idea to pick up. Because they can provide an hour-and-a-half of battery life from only a 10-minute charge, it’s no problem attaching them to the charger when you’re in the shower and having them ready to go as soon as you’re done.

Don’t buy them if…

You want the best sound quality or premium features

It shouldn’t surprise you that, at $50 (£50, around AU$70), the Beats Flex doesn’t have every cutting-edge feature like hands-free Siri or active noise cancellation and the sound quality is just OK compared to some higher-end earbuds. If that stuff matters to you more than the name, then maybe the Beats Flex aren’t right for you.

We test dozens of earbuds every year, and few of them offered as poor of a fit as the new Beats Flex. Without wingtips to hold them in, the Flex can easily fall out, making them a poor choice for the workout crowd and anyone who’s ever had problems keeping earbuds seated properly. If you fall into that camp, we can’t recommend the Beats Flex for you.

Don't miss a deal at Currys
Best offers at Nike DE
Discounts, Sales and Deals at Surfdome
Save your money with Intuit Small Business
Online-Shopping with Boohoo
Best products at Udemy
Latest Posts