Avita isn’t likely to be a laptop brand you’ll have heard of, as the Hong Kong-based company is only just launching in the UK, with its Liber 14 laptop leading the charge.

In a market crowded with thin and light laptops, the company is aiming to bring a ‘premium’ ultraportable laptop to British shores at a wallet-friendly price. And it’s also trying to mix up laptop aesthetics a tad, offering models with eye-catching designs on their lids. It certainly achieves the latter and goes some way to creating a solid laptop for well below the cost of many Windows 10 ultraportables.

Avita Liber review: What you need to know

The Liber 14 is essentially a low-ish end Windows 10 ultraportable, powered by an eighth-generation Intel Core i3 laptop-grade processor, 8GB of RAM, 128GB of storage, and a Full HD display; hardly a spec to get the heart racing. Currently, it only comes in this specification, though I’m told Avita will likely release more options once the brand builds its UK presence. 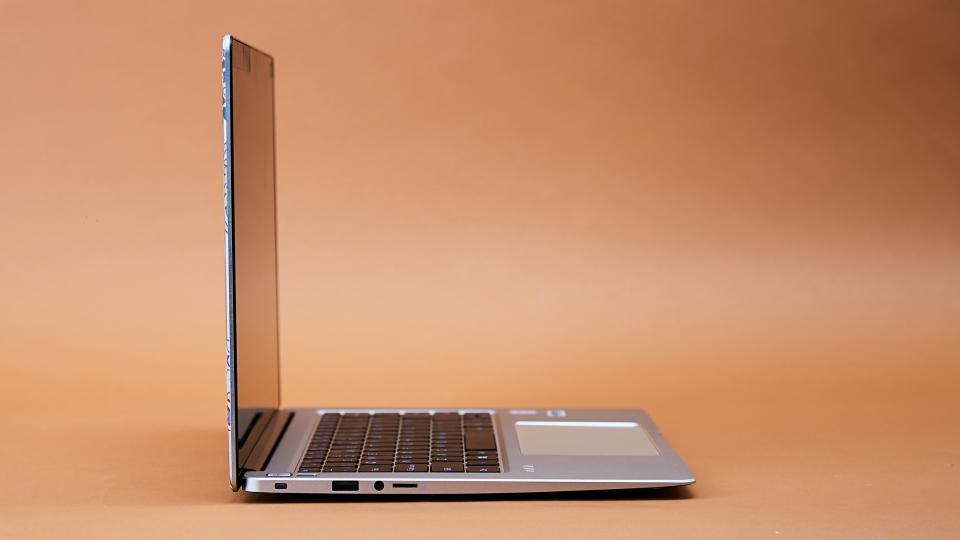 Where the Liber attempts stands out is with its aesthetics, packing the electronic innards into an aluminium chassis with somewhat striking finishes; Pearl White, Angel Blue, Ornament on Gold, and Paisley on Lilac. The first colour is a fairly standard white, but the light blue is certainly vivid, while the other two finishes add a textured design to the laptop’s lid that sits somewhere between a rug pattern and an intricate tattoo.

At £530, the Avita Liber is aiming to compete on price rather than power in the ultraportable arena.

High-end machines like the Razer Blade Stealth and Microsoft Surface Laptop 2 offer much better specs but come at a price more than double that of the Liber.

Really its main competition is from laptops such as the Asus ZenBook UX410UA, which has an older seventh-generation Core i3 processor, but otherwise comparable specs, for £565. Lenovo also has a horse in the race in the form of the IdeaPad S340, with £550 serving up a 14in laptop with a Core i5-8265U, 8GB of RAM, and 256GB of storage, somewhat trumping the Liber’s lesser spec.

There are also plenty of Chromebooks like the £349 Acer Chromebook 514, that present very affordable ultraportable options providing you’re happy to eschew Windows 10 and more powerful processors.

But the Liber is trying to blend aesthetics with a solid, if lower-end, specification. And below the £600 mark not many laptop makers are doing the same, so it does stand somewhat alone for better or worse.

The selling point of the Libra is its aesthetics, mainly with the two lid pattern adorned models. My ‘Ornament on Gold’ model certainly drew the gaze of colleagues, but the reaction was mixed. While the actual design is done to a neat standard, whether you find the ornamental pseudo-flower pattern attractive or ostentatious will be a matter of taste; I’m more of a fan of cleaner minimalist laptop aesthetics.

What won’t divide opinion is the build quality of the Libra with its aluminium chassis feeling pleasant to the touch and solidly formed. There’s no real flex in the lid or other surfaces, with the exception of the underside panel near where it meets the hinge, though that’s nothing to worry about.

Aside from the lid design and colour scheme, the Liber is a fairly standard lower-end laptop; there’s no slick bezel-slimming display design or pop up webcams; the rather meagre 720p webcam sits in the traditional spot above the display.

At 333 x 222mm and 16mm thick, the Avita Liber isn’t the thinnest 14in laptop around, nor is it the lightest at 1.46kg, but it still presents a neat package that’s no strain to carry around. 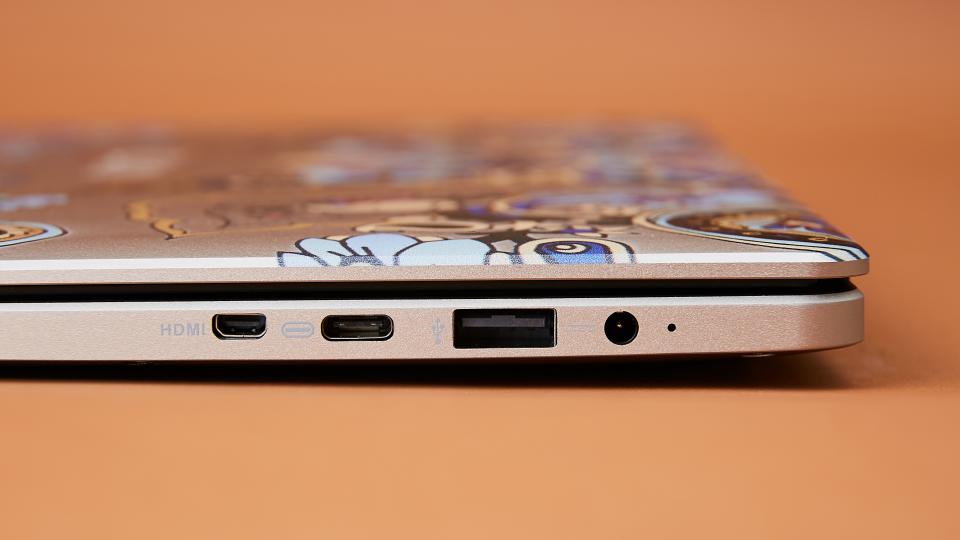 A pair of USB 3.0 Type-A ports – one and the left and one on the right – offer connectivity to most popular peripherals, while a USB Type-C connector offers fast charging of the PD 2.0 standard; Thunderbolt 3 is missing, but that’s par for the course on budget laptops. There also a standard barrel DC connection for charging and 3.5mm headphone jack.

The ports then get a little odd, with the addition of a micro-HDMI and microSD card slot, neither of which are particularly widely used, at least in the Expert Reviews offices. And given laptops of a similar dimension can fit in full-sized versions of these ports, it’s a little disappointing the Liber only has the smaller versions.

It manages to include a fingerprint reader, oddly located to the left of the keyboard, which is unusual given how such scanners normally favour right-handers. Wi-Fi covers 802.11ac – no Wi-Fi 6 though that’s to be expected at this price – and Bluetooth 4.2 is supported rather than Bluetooth 5.0; again not a big deal.

Finally, there’s a pair of stereo speakers on the bottom of the laptop, which are on par with most ultraportables in that they deliver clear sound that’s lacking in any real punch; fine for watching YouTube, less so for the latest HBO extravaganza.

All in all, the Liber is a decently designed and built laptop for its price, which is a pleasant surprise.

The Avita Liber’s backlit island-style keyboard delivers a pretty vanilla typing experience, with keys that have just enough travel to allow for speedy touch typing but feel a tad spongy for a truly tactile experience, such as that found on the Surface Laptop 2’s keyboard.

Given the Liber’s price, I didn’t expect it to deliver the same keyboard quality as a machine around double its price. At the same time the keyboard’s quality is a notch down from the rest of the Liber’s more premium feel.

I’m not a fan of the letters on the keys being orientated off centre, or their slightly textured finish – both feel cheap and pointless. And on the review unit I had, the backlighting under the ‘C’ key was bleeding out from the keycap thanks to it being placed a little askew in the keyboard deck. It’s a good enough keyboard, but it certainly doesn’t punch above its class. 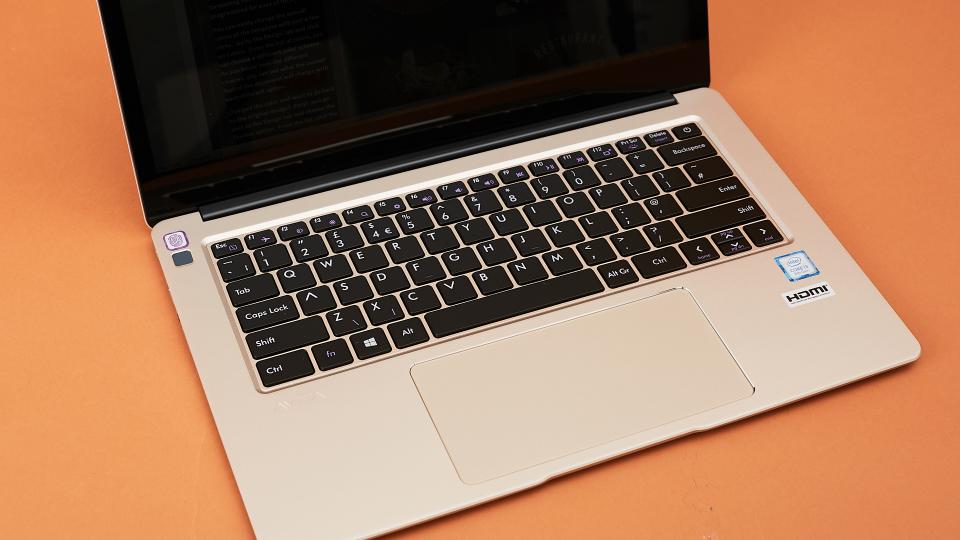 The trackpad puts on a better performance offering a large horizontal footprint that’s some half the length of the keyboard, with plenty of height as well. While a bit more sensitivity wouldn’t go amiss, thanks to the use of Windows Precision drivers the trackpad is reasonably accurate too, especially compared to laptops that use Synaptics drivers – looking at you HP Spectre Folio.

The diveboard mechanism delivers a solid, precise click as well, which isn’t something I expected from a laptop at this price. Granted the trackpad can’t hold a candle to Apple’s Force Touch pad on its MacBooks, but then nothing can at the moment.

The Liber’s 14in IPS display with a 1,920 x 1,080 resolution is pretty much the bare minimum an ultraportable can get away with these days. The bezels around that display haven’t been subjected to the diets of those on more expensive ultraportables, but they aren’t horribly thick like the frames on some Chromebooks.

I’m not going to lambast the Liber’s noticeable bezels, but had Avita managed to slim them down, it would have given the laptop a more premium screen to match its build and design. Instead the display’s design feels like a missed opportunity.

As for the IPS panel’s performance, it’s decent rather than stellar. I measured a brightness of 373cd/m2, which is good if not retina-searing, and a contrast ratio of 1095:1 is also perfectly acceptable, at least for web browsing; video content lacks a little something especially in dark scenes. 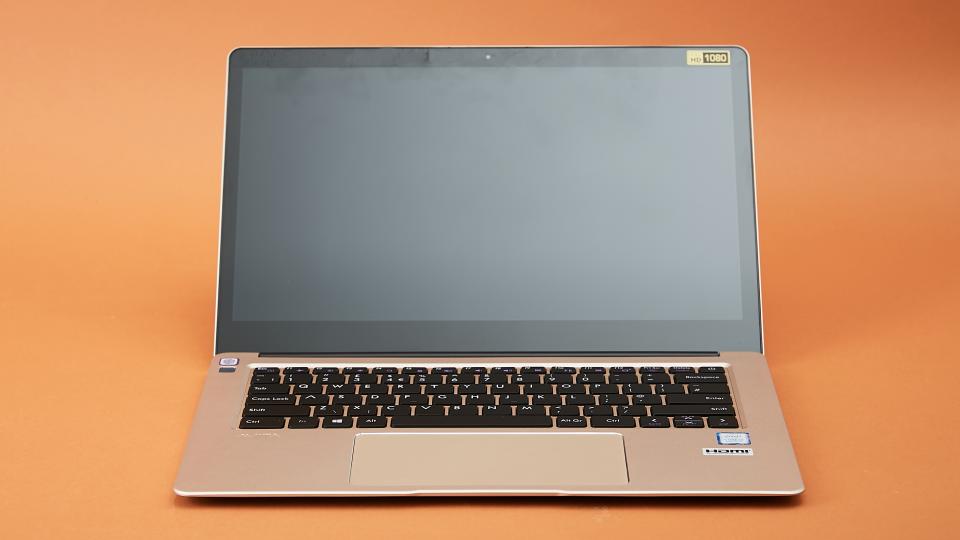 Things take a turn for the worst when it comes to colour performance, with the display covering 81.8% of the sRGB gamut, though its gamut volume hits 98.2%. This means photo editing on the Liber is off the cards, and I noticed greens in particular are lacking in punch and depth.

Yet again I have to go back to the Liber’s price: for a little over £500, the display is nothing to complain about as I’ve seen a lot worse on laptops costing much more. And for everyday tasks the screen is fine.

A dual-core Intel Core i3-8130U processor isn’t going to set pulses racing, what with many ultraportables we’ve reviewed sporting Core i5 and i7 chips.

When it comes to our in-house benchmarks, the Liber scored a rather lacklustre 47, which is some way behind other 14in and 13in laptops we’ve seen recently. This isn’t helped by the laptop’s 4GB of RAM, which is really a bare minimum for Windows 10, and doesn’t leave the Liber with much memory headroom.

Like many U-Series Core chips, the graphics accelerator is integrated in the form of the Intel UHD Graphics 620. It’s a pretty common ultrabook GPU, but given it’s paired with a slower CPU and smaller amount of RAM, the Liber’s graphical grunt falls behind that of the Dell XPS 13 and Huawei MateBook 13 for example. In the GFXBench car chase test, the Liber managed 18fps, which isn’t brilliant but is only just behind the Surface Laptop 2.

However, benchmarks are only half the story here. It’s easy to forget that many programs and apps still rely on single-core performance and the Liber’s CPU runs from 2.2GHz to 3.4GHz, which is plenty of power for such software.

Sure, web pages are a little slower to load, especially those with embedded videos, and 4GB of RAM will fill up if you open too many Chrome tabs. But I didn’t encounter any major hiccups with the Liber’s performance; just don’t expect to do any hefty video encoding work or anything more than very light gaming.

Storage comes in the form of 128GB M.2 SATA SSD, which delivered a sequential read speed of 26.6MB/s and a sequential write speed of 52.4MB/s in the AS SSD 4K benchmark, which isn’t the nippiest around, with the MateBook 13 and Blade Stealth 13 serving up faster drive speeds. I suspect Avita is using a cheaper SSD that those found in pricier machines, which is probably why it’s a lot cheaper than the aforementioned ultraportables.

Not that the Libra loads things up particularly slowly, it’s just not going to be fast at transferring large files in a pinch. That said, I’d avoid popping too many large files on the laptop’s SSD as 128GB can fill up pretty sharpish, especially when some 20GB or so is already taken up by Windows 10.

Our looping video rundown test saw the Liber eke out seven hours and 14 minutes from its battery, which is decent, if not up there with the ten hours that the XPS 13 manages. But it should last most of a working day before it starts gasping out for power.

If the Liber made its UK debut targeting £1,000+ ultraportables, it would get laughed out of the market, given the compromises in some of its hardware. But for £530 it’s actually a reasonably compelling 14in laptop. 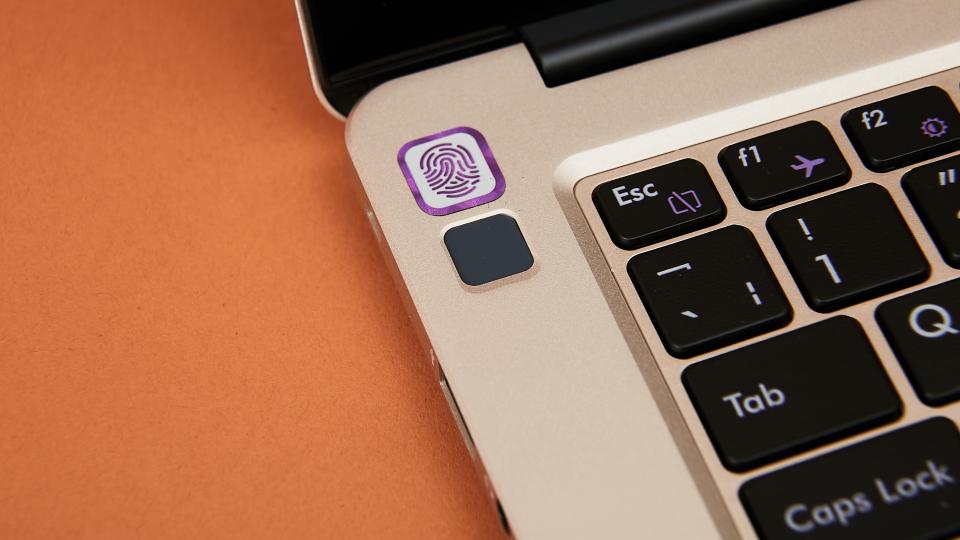 A Core i3 processor is more than enough for web browsing, berating colleagues in emails, and whiling away time ogling YouTube videos, and 4GB of memory is just about acceptable at this price.

The Lenovo IdeaPad S340 offers better value for money, as well as a brand with some laptop heritage behind it. But it lacks the aesthetic flair of the Liber, which makes it a contender if you’re after a decent affordable laptop that stands out from the crowd. And for Avita, the Liber marks a solid British debut and one that the brand can build on if nothing else.

Don't miss a deal at Vimeo
Best offers at H&R Block
Discounts, Sales and Deals at Go Daddy
Save your money with House of Fraser
Online-Shopping with Sky
Best products at Sephora
Latest Posts