It’s expensive, and not everyone will need the sheer speed of Wi-Fi 6, but the new ZenWifi AX mesh networking system provides top-of-the-range performance for streaming video, gaming and other online activities. The Asus app also impresses with a good set of advanced controls, security features, and content filtering for parents of young children.

The Asus ZenWifi AX (XT8) is quite possibly the best router the company has produced, and it’s one of the best mesh router systems, and best Wi-Fi 6 routers, we’ve tested.

You can’t buy the Asus ZenWifi AX (XT8) directly from Asus, but it’s widely available online. If you’re in the UK and just need a Wi-Fi 6 upgrade for your existing router then you can buy a single ZenWifi AX for £219.99, which can cover an area of up to 2475sq.ft – although that single router option doesn’t currently seem to be available in other countries.

The two-piece mesh system that we review here covers a more extensive 4400sq.ft and costs a rather hefty £399.99/US $449.99/AU $899.00. It’s available in either black or white – but be careful not to confuse it with the less expensive Asus ZenWifi AC (CT8), which is virtually identical but, as the name suggests, still uses the older 802.11ac version of Wi-Fi. 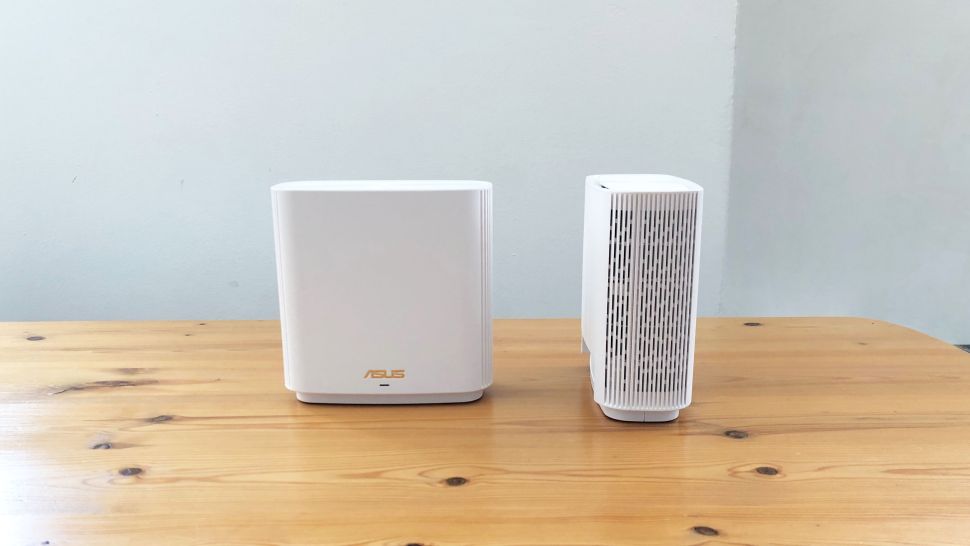 It’s expensive, even by the standards of new Wi-Fi 6 routers, but the Asus ZenWiFi AX earns its keep with an impressive combination of features and performance.

However, Wi-Fi 6 is still compatible with millions of devices that use 802.11ac Wi-Fi, so you shouldn’t have any problem using it with your existing computers and mobile devices.

There are few home broadband services that come anywhere near the speeds supported by Wi-Fi 6, so Asus sets aside one of the 5.0GHz bands to be used as a ‘backhaul’ that provides a high-speed link between the two mesh routers, while still leaving the remaining 2.4GHz and 5.0GHz bands to transmit data to your computers and mobile devices. 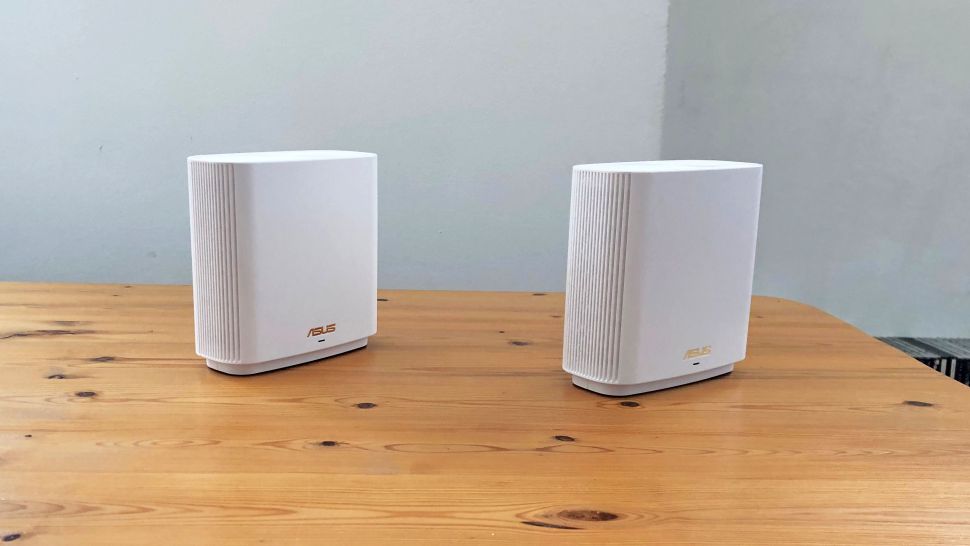 The Asus Router app and set-up procedure aren’t quite as straightforward as we’ve seen from other mesh systems, but once you’ve got everything running the app does provide an impressive range of features.

Most mesh systems start by using an Ethernet cable to connect the first mesh router to your existing broadband router, and you then place the other mesh routers further away in other rooms around your home. The Asus app doesn’t tell you anything at this point at all, so you have to read ye olde printed manual to find out how to get started. And, somewhat unusually, both routers initially have to be plugged in and set up together in the same room – preferably sitting within three metres of each other.

The Asus app then uses a Bluetooth connection on your iOS or Android mobile device to set up your new mesh network. And, unlike many routers and mesh systems, we were pleased to see that it starts off straight away by asking if you want to create a single network that combines the 2.4GHz and 5.0GHz bands, or create two separate networks with different names and passwords. Once that’s done you can unplug the second ZenWifi router and move it into another room to complete your new network.

Again, though, the app doesn’t help you here, leaving you to flick through the printed manual to find that information. It also has a tendency to throw jargon around, such as ‘dynamic DNS’, without explaining what it means, so Asus could do a bit more to clarify the set-up process for people who aren’t too familiar with mesh technology.

Thankfully, though, the Asus app is more straightforward once you’ve got your new mesh networking up and running, and includes a good set of parental controls and other features. You can create profiles for family members under the age of 18, which are linked to the devices they use. These profiles allow you to create a schedule for Internet access, as well as using content filters to block unsuitable adult material, gambling or messaging apps for younger children.

There’s also a simple option for ‘QoS’ – quality of service – that allows you to prioritise bandwidth for specific services, such as streaming video or gaming, and even a bandwidth ‘limiter’ that can restrict the bandwidth used by individual devices.

The app also includes Asus’ AiProtection features, which keep an eye out for malicious websites, malware, and other outside attempts to hack into your home network. Many routers and mesh systems charge additional subscription fees for security features and parental controls such as these, so it’s good to see Asus providing these features without any additional charge.

We weren’t disappointed by the performance of the ZenWifi AX either. It’s not cheap, of course, but it pushed our 50Mbps Internet connection all the way – even squeezing it up to 60Mbps at one point (which sometimes happens when the weather is good for some reason). And, crucially, it was able to maintain that speed even in our back office, which often struggles to get a good wi-fi signal. Downloads from Steam hit 7.4MB/s for devices in the same room as the first ZenWifi, and barely flickered as we moved into the back office, with download speeds holding steady at 7.3MB/s even on the slower 2.4GHz band. 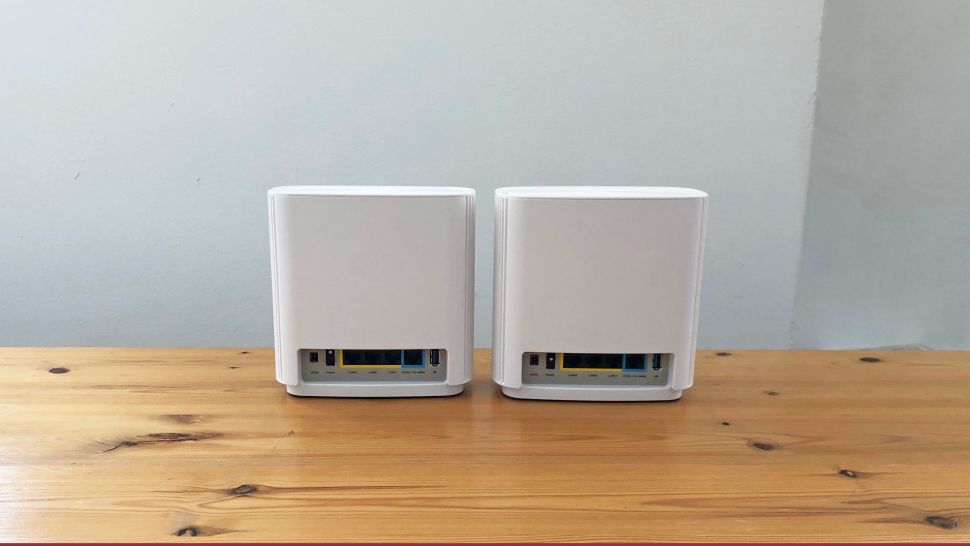 With tri-band Wi-Fi 6, the ZenWiFi AX is able to create a high-speed ‘backhaul’ that connects the two mesh routers, while still providing 2.4GHz and 5.0Ghz bands for high-speed video streaming, music, and gaming.

You have weak Wi-Fi in some rooms

Mesh networking systems aren’t just about speed – they’re also designed to eliminate ‘deadspots’ in rooms or other locations that normally struggle to get a good wi-fi signal. The ZenWiFi AX is expensive, but it really impressed us with its ability to maintain fast wi-fi even in the most remote corners of our office.

You’re on a budget

The ZenWiFi AX is a top-of-the-range Wi-Fi mesh system that runs far faster than most home broadband services. There are plenty of less expensive mesh systems that can still handle streaming video and gaming with no trouble at all.

You live in a palace

Most mesh systems are available with either two or three routers in order to accommodate homes of different sizes. Somewhat oddly, the expensive ZenWiFi AX is only available with two routers that cover up to 4400 sq.ft, with no three-router option for even larger homes.

The Asus Router app is full of useful features and parental controls. However, its set-up process is a little long-winded and it tends to throw quite a bit of jargon around, so it could be a bit daunting for newcomers to mesh technology.

Don't miss a deal at Boohoo
Best offers at Microsoft Store
Discounts, Sales and Deals at Turbo Tax
Save your money with Sky
Online-Shopping with The Home Depot
Best products at Argos
Latest Posts