An Asus GeForce RTX 3080 Ti has been spotted online, and this could be our first glimpse of a next-gen flagship Ampere graphics card, although there are doubts about the image, as we’ll discuss.

On the face of it, then, this is allegedly the incoming RTX 3080 Ti from Asus – you can see the model name in the bottom-left corner – labeled as the ‘next-generation ROG Strix’ as published by Videocardz. As you can see, it’s a triple-fan design, and it has a more premium air about it compared to the existing 2080 Ti from Asus.

According to Videocardz, the leaked image comes from an internal Asus meeting – hence the presenter standing in front of it (also in the bottom-left) – and it could represent a possible design for the 3080 Ti, or indeed it might just be an accurate representation of the final GPU. 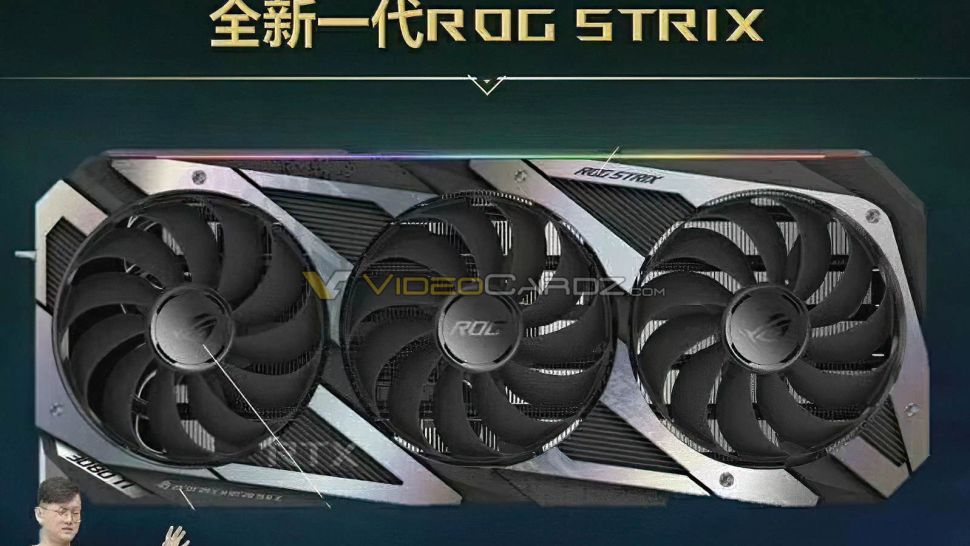 Obviously we can’t be sure about any of that, and there are certainly folks out there who have doubts about this being some kind of a fake or Photoshop trickery – but Videocardz recently updated its news story to say that it’s quite confident the image is real, and it comes from an ‘internal design proofing’.

This means it may just be one of a number of concepts, and not necessarily representative of the final product, but we’ll just have to see – and as ever, treat these kind of leaks with an appropriate amount of caution.

Even if this is just a concept shot that isn’t indicative of the final incarnation of the Asus Rog Strix GeForce RTX 3080 Ti, what is interesting here is that the 3080 Ti designation is employed.

That’s because in recent times there have been rumors about Nvidia producing an RTX 3090 as a consumer GPU, and while we weren’t convinced by that speculation – and indeed one of our colleagues argued strongly against it for various reasons – this leak, if accurate, would seem to be the final nail in the coffin for the idea.

With no RTX 3090, there will seemingly be an RTX 3080, 3080 Ti and an Ampere-based Titan, as more recent speculation from the GPU grapevine has insisted (the rumor mill contends that Nvida will make three cards based on the top-end GA102 chip, and interestingly the 3080 will be one of those).

In other words, in terms of model names, the situation will be the same as current-gen 2000-series graphics cards. Of course, the other thing this seems to confirm is that Ampere will be the 3000-series (while that was obviously expected, Nvidia could have potentially gone off on a tangent with its naming scheme).

Another point here is that with more and more RTX 3000-related leaks popping up, including this glimpse of a potential 3080 Ti design, all this suggests that the launch of Nvidia’s next-gen Ampere products is indeed coming closer – an exciting prospect.

That’s backed up by the fact that we’ve seen prices dropping with RTX 2000 graphics cards recently, and the glimpse we’ve had of Nvidia’s RTX 3080 in another leak. The theory is that we could see Nvidia’s new graphics cards launching as soon as September – potentially in a direct head-to-head battle with AMD’s Big Navi which could be released at the same time.

Don't miss a deal at Newegg
Best offers at Ancestry
Discounts, Sales and Deals at Nike DE
Save your money with EBay DE
Online-Shopping with John Lewis
Best products at The Home Depot
Latest Posts