Slick, lightweight and incredibly powerful, the 10.5-inch iPad Pro is the perfect ultraportable

The Apple 10.5-inch iPad Pro represents a turning point in the history of the iPad tablet. Having cut the price of its 9.7-inch, non-pro tablet earlier in the year, the strategy for the iPad Pro is clear: Apple wants its customers to view its new 10.5-inch tablet principally as a laptop replacement – no longer a companion product to a “proper” laptop, but a fully fledged device in its own right.

The 10.5-inch iPad Pro is the company’s first new product since the appearance of the cheaper, dumber 9.7-inch model, and it’s clear from the outset that this is a very different tablet from the many that have preceded it. It has a larger screen, more powerful internals and slimmer bezels, and it now works seamlessly with the Apple Pencil.

It’s the laptop-bothering price that truly signifies this is no longer a tablet in the traditional sense, though. Add the keyboard to the base-specification 10.5-inch iPad Pro and you have a machine that costs £778 inc VAT. That puts it in the same price bracket as the old MacBook Air 11.6-inch.

You can see where Apple is going with its Pro range of tablets, and the 10.5-inch model represents another step along the way. It should be viewed, then, not as a tablet with an optional keyboard, but as a full-blown portable computer in the same vein as the firm’s larger 12.5-inch MacBook. In that context, the price looks a little more palatable. 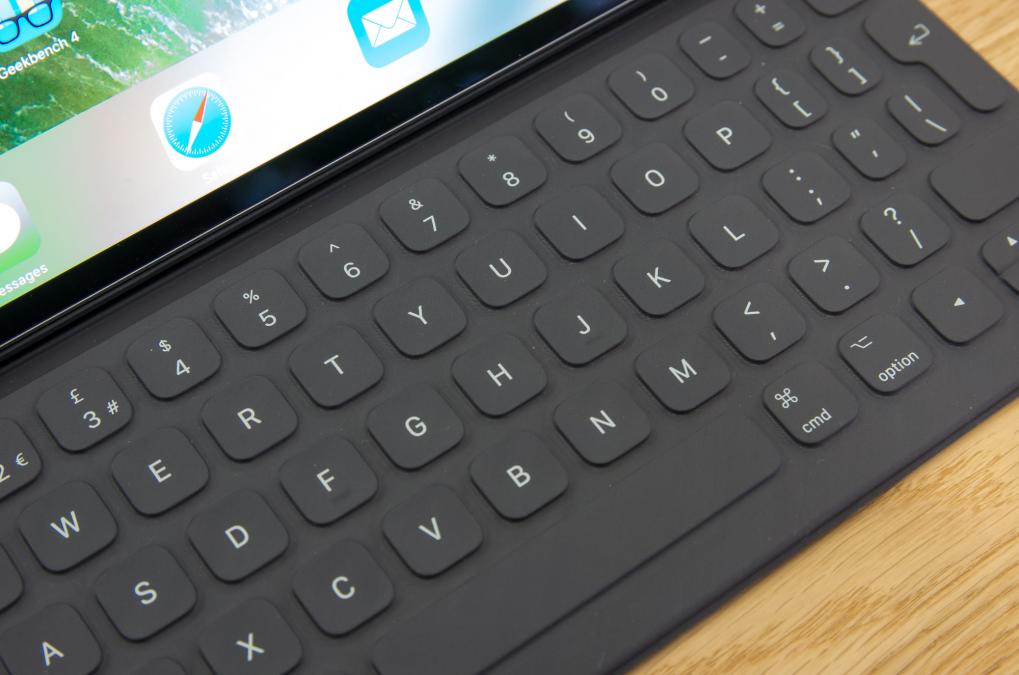 In short, the newest iPad Pro is an incredibly powerful computer with the very latest Apple has to offer under the bonnet. It has a larger 10.5-inch screen and slimmer bezels than the outgoing 9.7-inch model; a faster, more powerful CPU and graphics; and it remains much lighter than the equivalent ultraportable laptop. It’s the best tablet around and, for many people, it could well be the best ultraportable laptop, too.

The 10.5-inch iPad Pro has little competition outside of Apple’s own stable of products, but what little there is comes from Samsung and its Galaxy Tab S3. This a lovely tablet with a slightly smaller, but still sumptuous, 9.7-inch AMOLED screen and, like the 10.5-inch iPad Pro, it’s also available with an optional keyboard cover. It’s slightly cheaper, costing £738 with the keyboard, and Samsung includes a pressure-sensitive stylus in the box, where Apple charges an extra £100. 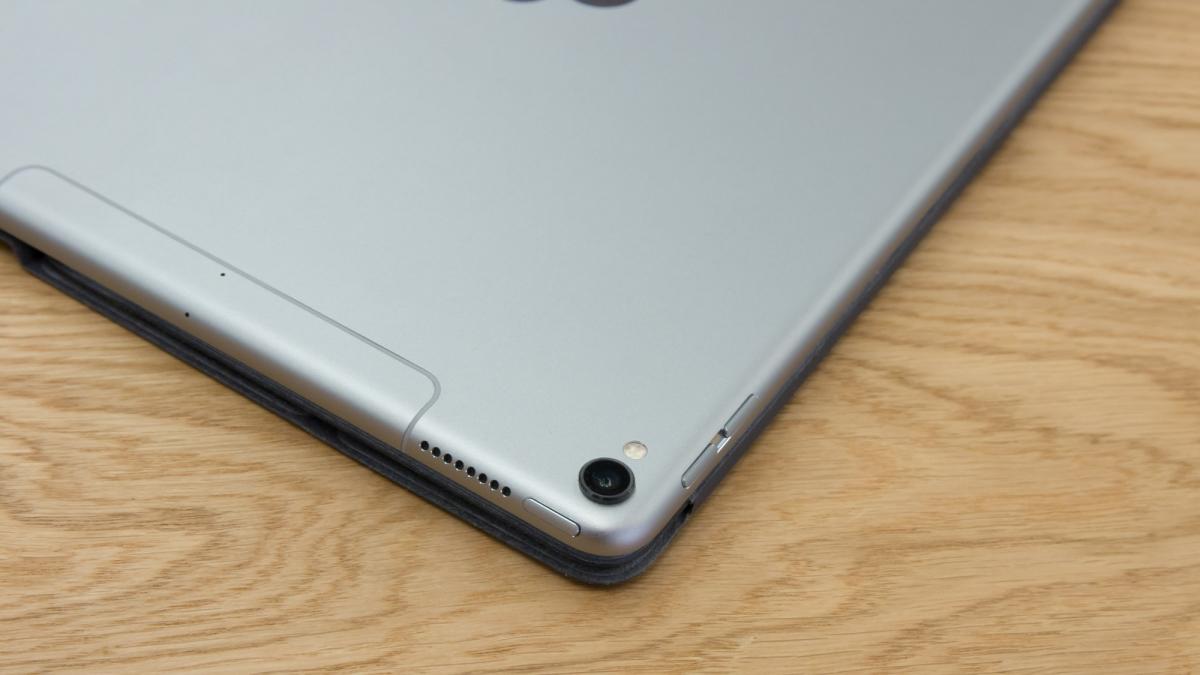 That’s one thing in favour of the Samsung tablet. Do bear in mind, though, that Android still doesn’t have the same broad range of tablet-specific apps that the iPad has, despite years of trying. If you want to do proper work, the iPad still represents the better option, despite being slightly more expensive.

Despite growing from 9.7-inch to 10.5-inch in size, the new iPad Pro isn’t significantly larger than the tablet it replaces. It’s 16mm taller, half a centimetre wider and 32g heavier but unless you set the two side by side, you’re not going to notice a difference.

That’s thanks, in the main, to the narrower bezels surrounding the display – proportionally, the 10.5-inch iPad Pro looks more like its bigger 12.9-inch cousin now – but the bezels aren’t thin enough to get in the way of usability. There’s also a change in resolution, to a higher 2,224 x 1,668, although Apple has kept the pixel density exactly the same at 264ppi. 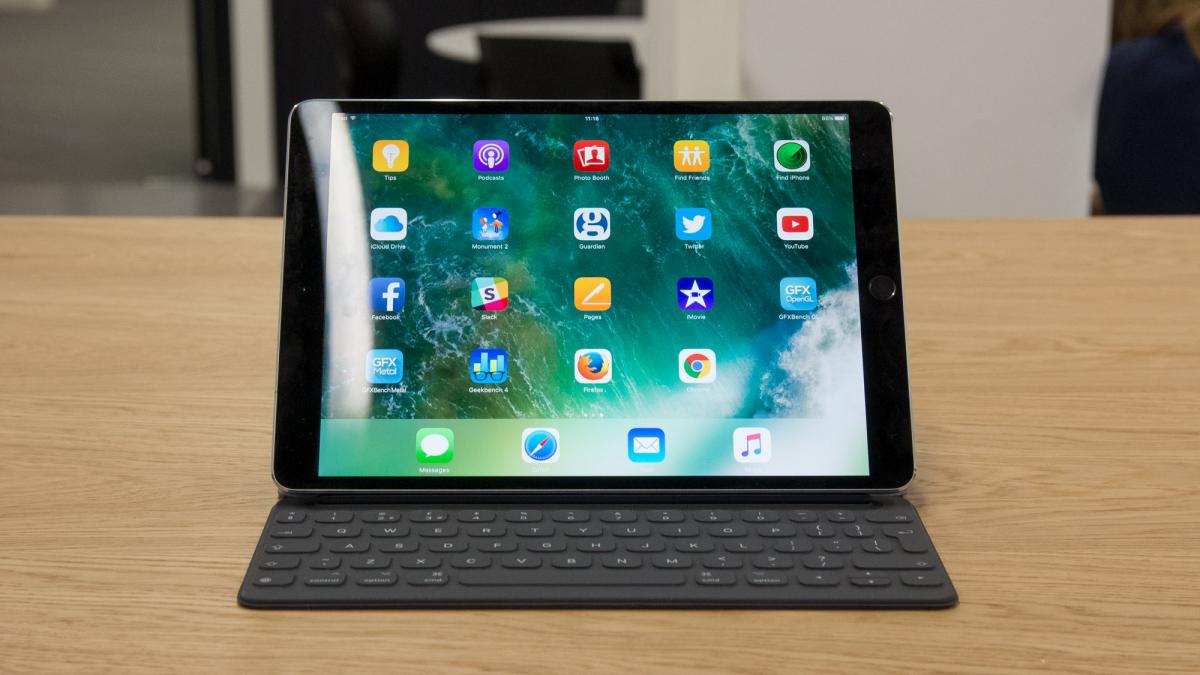 That means it’s just as sharp as the old display and it has been treated with the same anti-reflective coating, so it’s just as easy to read in tricky, sunlit conditions. But Apple hasn’t left it at that. The new screen has a faster refresh rate (it’s double at 120Hz) and, although you might expect this not to make that much of a difference, in fact it does, lending everything a slightly smoother, less smeary feel onscreen, especially when scrolling rapidly through long web pages.

Turn it on and you may spot a difference between it and its predecessor, too. Apple says the 10.5in iPad Pro’s display is 50% brighter than older models but the difference isn’t that stark between it and the 9.7-inch iPad Pro – in fact the 10.5-inch iPad Pro checks in at a maximum brightness of 528cd/m2, where the 9.7in model reached 495cd/m2. As usual, both colour accuracy and contrast are beyond reproach – if you’ve laid eyes on the 9.7-inch iPad Pro’s display, this is slightly better, but you’d have to look pretty close to see it.

Other than the screen and slight size change, there’s not much that’s physically different here. The volume and power buttons are in the same locations, as are the speaker grilles, and the Smart Keyboard connects in exactly the same way – via three magnetic contacts along one of the tablet’s long edges. 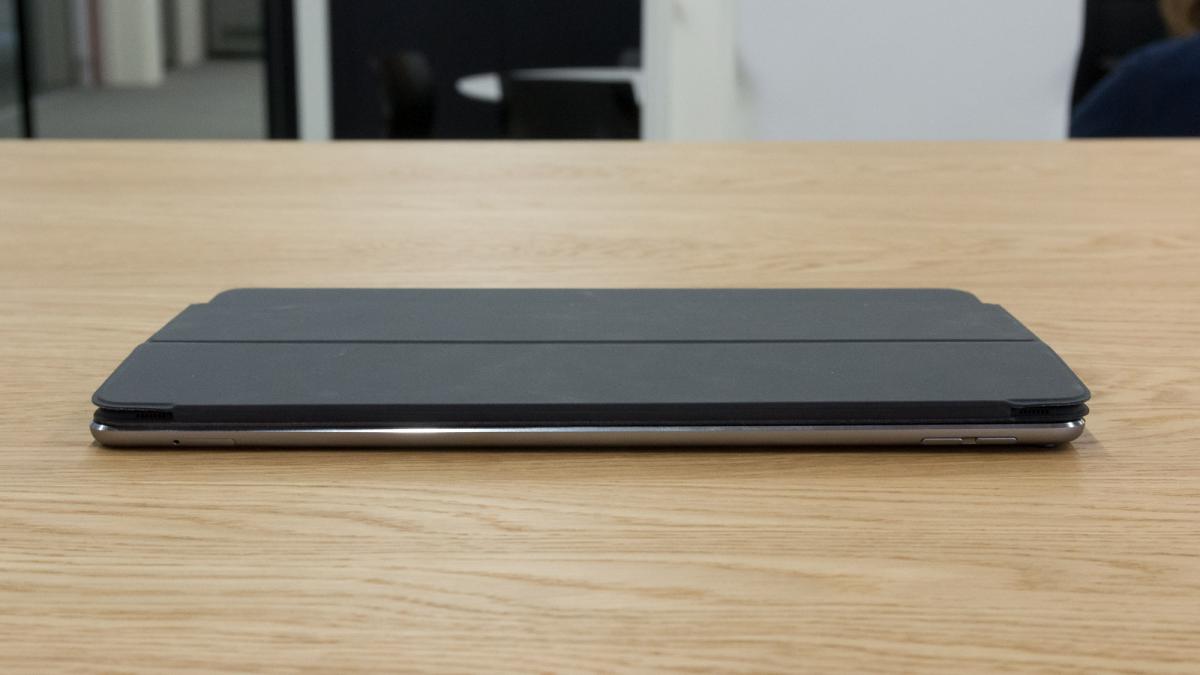 The rear camera is in the same location, too, with near-identical specifications to the previous model. It’s a 12-megapixel unit with phase-detect autofocus, the only big difference being a brighter f/1.8 aperture than before, which makes for less noisy, cleaner images in low light. And the 10.5-inch iPad Pro remains compatible with the Apple Pencil for those who like to use their tablet as a sketch pad or note-taking device.

The only other change you might notice if you’ve bought the keyboard in the UK is that it now comes with a proper UK layout, complete with double-height Enter key and a dedicated £ key. The keyboard cover with its fabric-covered design is just as cramped as before, though, and not as comfortable for typing on as the larger 12.9-inch iPad Pro or a full-size 13-inch laptop keyboard as you’ll find on the MateBook X and Dell XPS 13.

As usual with a new iPad, the 10.5-inch Pro has upgraded internals, which is nice. However, you have to question whether this particular upgrade is strictly necessary this time around. The A9X in the previous iPad Pro made it faster than any other tablet on the market by an order of magnitude and, had Apple simply stuck with the same silicon, this would still be the fastest tablet around.

Apple is not one to rest on its laurels, however, and this year’s CPU of choice is the new 64-bit A10X Fusion. Understandably, there’s no problem navigating around the environs of iOS 10 (soon to become iOS 11), and it will play any game you care to throw at it with dismissive ease – but Apple is playing a different game here. It wants customers to consider the 10.5-inch iPad Pro as a proper laptop replacement and, in order to convince customers that it’s capable of doing proper work, it needs to show it has enough power to do that.

And power is one thing this tablet is most certainly not short of. A short glance at the benchmark graphs above should be enough to convince you that there’s nothing this compact tablet can’t take in its stride. It’s almost twice as fast for multi-core CPU tasks as the 9.7-inch iPad Pro and a third faster for single-core duties.

And when it comes to graphics, the picture looks even more impressive, with the new Pro delivering double the frame rate of its predecessor in the graphically intensive GFXBench Manhattan test.

That increased performance will soon be put to good use once iOS 11 arrives in September. One of the key improvements Apple has made in latest OS update is to its multitasking capabilities. iOS 11 will bring a macOS-style Dock to the tablet OS; the multitasking view switches to a more manageable grid-style view; and you’ll be able to drag and drop between apps as well as manipulate documents, photos and videos via a new Files app. It all adds up to a much more desktop-like experience, in keeping with the 10.5in iPad Pro’s pretensions as a replacement for your ultraportable laptop.

The worry around such an increase in performance is that it has the potential to hit battery life negatively, but that’s not the case here. Lasting 12hrs 59mins away from the wall socket during our continuous video playback test wit the screen brightness set to 170cd/m2 and Flight Mode engaged, that’s a significantly leg-up on the 9.7in iPad Pro’s 8hrs 56mins longevity. Upgrade to the 10.5in model if you’re in dire need to squeeze some extra juice out of that battery.

The tablet in the traditional sense is all but dead in 2017, but the 10.5-inch iPad Pro proves that it still has its place. Add a keyboard, boost performance to near laptop levels and tweak the software so it feels more like a desktop – suddenly you have a machine that’s no longer a companion device, but one that’s ready to be your main computer.

It’s at this point that I usually ask myself whether I’d actually want to give up my MacBook Pro and move over fully to an iOS device like the 10.5-inch iPad Pro instead. And this is the point at which Apple’s utopian idea of the iPad as laptop replacement usually comes unstuck. I’m perfectly happy doing most things on an iPad, but when it comes to humdrum tasks such as copying files to and fro, the iPad has always fallen short.

But the promise of iOS 11, complete with its proper file manipulation and improved multitasking, is set to remove that long-standing shortcoming and with it one of the last barriers to the iPad becoming a proper computing tool. It’s also helpful that there are now higher-capacity options than ever before, with storage choices beginning at 64GB, rising to 256GB and finishing at a huge 512GB.

The new problem for Apple, however, will be convincing consumers to pay proper laptop prices for its new tablet. With prices starting at £619 for the 64GB alone, £159 extra for the keyboard and £99 for the Apple pencil it’s going to be a tough old sell.

Don't miss a deal at Nike DE
Best offers at Go Daddy
Discounts, Sales and Deals at Carphone Warehouse
Save your money with EE Mobile
Online-Shopping with Groupon
Best products at The Home Depot
Latest Posts