Acer Revo One RL85 review: Mini-PC wants to be a media streamer, NAS and console in one

Acer’s Revo One is a micro-PC which wants to be a media streamer, console, NAS drive and more. Here’s our Acer Revo One RL85 review.

Acer’s latest gadget for the home is the Revo One which is a micro-PC, media streamer and NAS drive in one. Here’s our Acer Revo One RL85 PC review.

Announced at CES 2015, the Acer Revo One is now available across the UK with the gadget aiming to be the hub of your home, no matter which room you decide to use it in. See also: Hannspree PC on a Stick review.

Although the Acer Revo One is a PC, its pint-sized form factor means that it’s also taking on the media streamers which are extremely popular. Under the covers it’s a very different piece of kit but must still, to some extent, take on the Apple TV, Google Chromecast, Roku players and Amazon Fire TV. Read: What’s the best media steamer 2015?

Compared to those gadgets, the Acer Revo One is pretty expensive. They are all under pounds 100 and the Revo starts at pounds 239 and the top of the range model will set you back pounds 599.

You’ll see why when we come to the hardware and specifications. This means it also has to compete with mini PCs like the Mac mini. 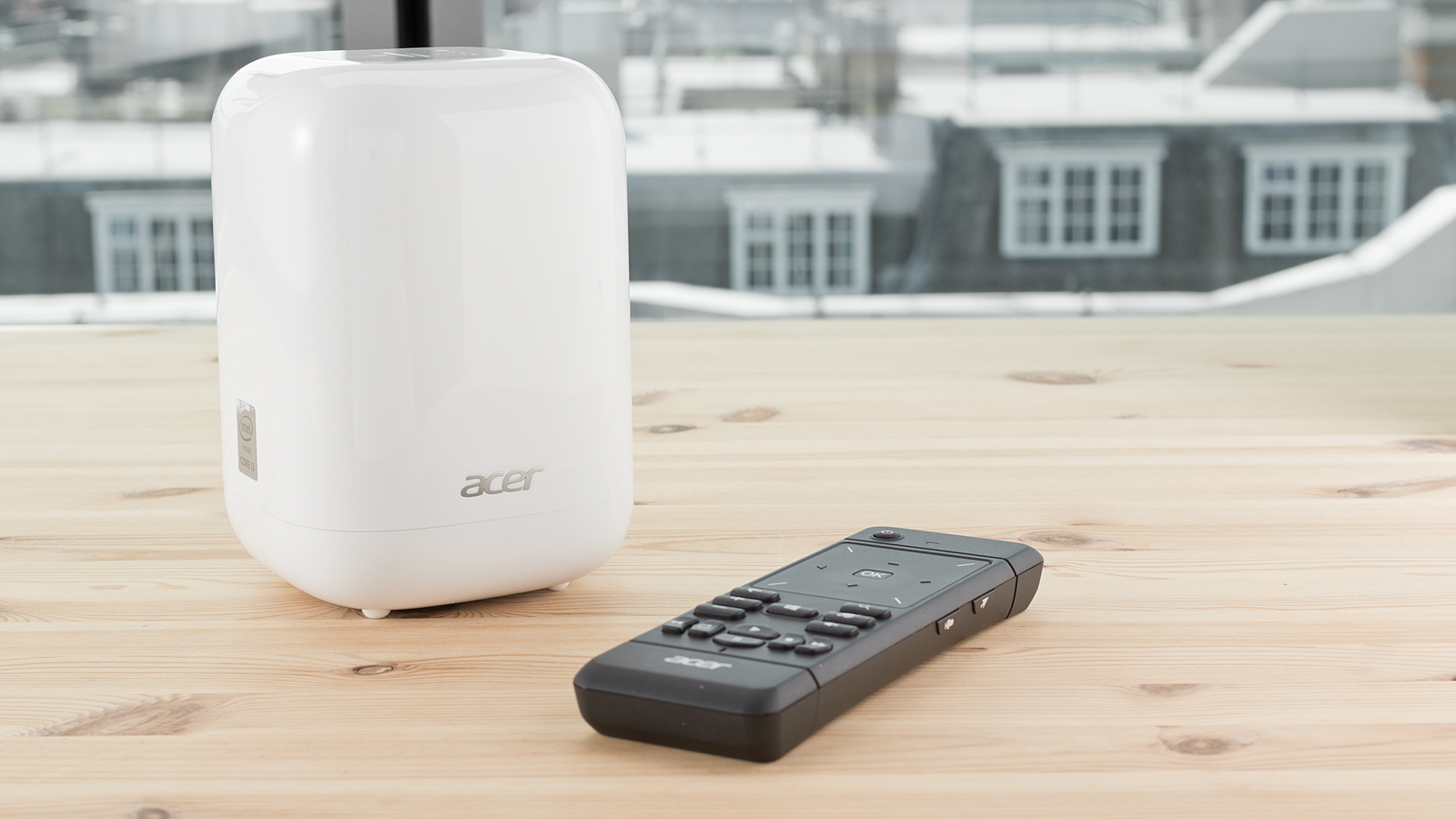 Acer Revo One RL85 review: what’s it for?

Why would you want to pay so much more than those affordable gadgets? Well since the Revo One is a PC, it’s not limited to certain apps. For example, Roku players don’t have Amazon Prime Instant Video and the Apple TV has no native support for BBC iPlayer. Using the web browser of your choice, you can watch essentially anything via the Revo One – Blinkbox, Sky Go, Google Play, you name it.

Since it’s running the Microsoft Bing version of Windows 8 you can do all the other things you’d normally do too. You won’t be able to run full blown PC games at a decent framerate (see our benchmark results below) but there is plenty of scope for casual gaming if you connected a wireless controller.
Acer is not touting the Revo One for a particular room in the house and quite rightly so.

You can easily plug it into your TV like a regular set-top box, put it in your study as a space saving PC or use it in the bedroom or even the kitchen. It wouldn’t be too hard to move it between rooms if you only move the device itself and the power lead.

If you are going to use it in the living room connected to a TV you’ll want the remote control in order to interact. It has a touchpad to move the cursor as well as handy buttons such as one to launch the web browser. There’s also a Qwerty keyboard on the rear. Most retailers will be shipping the Revo One with this controller but some will supply a Bluetooth keyboard and mouse so check before you buy. The controller doesn’t connect directly to the machine so you’ll need to use one of the USB ports for the receiver.

The remote control takes a little time to get used to but you do get the hang of the way it works eventually. For general navigation it’s quick but does get pretty fiddly when you need to interact with something like the EPG on Sky Go. Our main issues are that the keyboard is awkward to use with small buttons which need pressing very firmly and the trackpad can be frustrating at times making you wish you has a regular remote or a mouse.

Inside the small plastic housing of the Acer Revo One is an Intel Celeron processor. The entry level model will come with 2 GB of RAM and a 60 GB hard drive but that’s not it.

You’ll be able to choose models with an Intel Core i3 or i5, up to 8 GB of RAM and up to 2 TB of storage.
Despite being so small the Revo One has the potentially to handle 6 TB since it has three bays which can take 2 TB each. It can double up as a NAS drive and also supports RAID 0- 1- and 5. 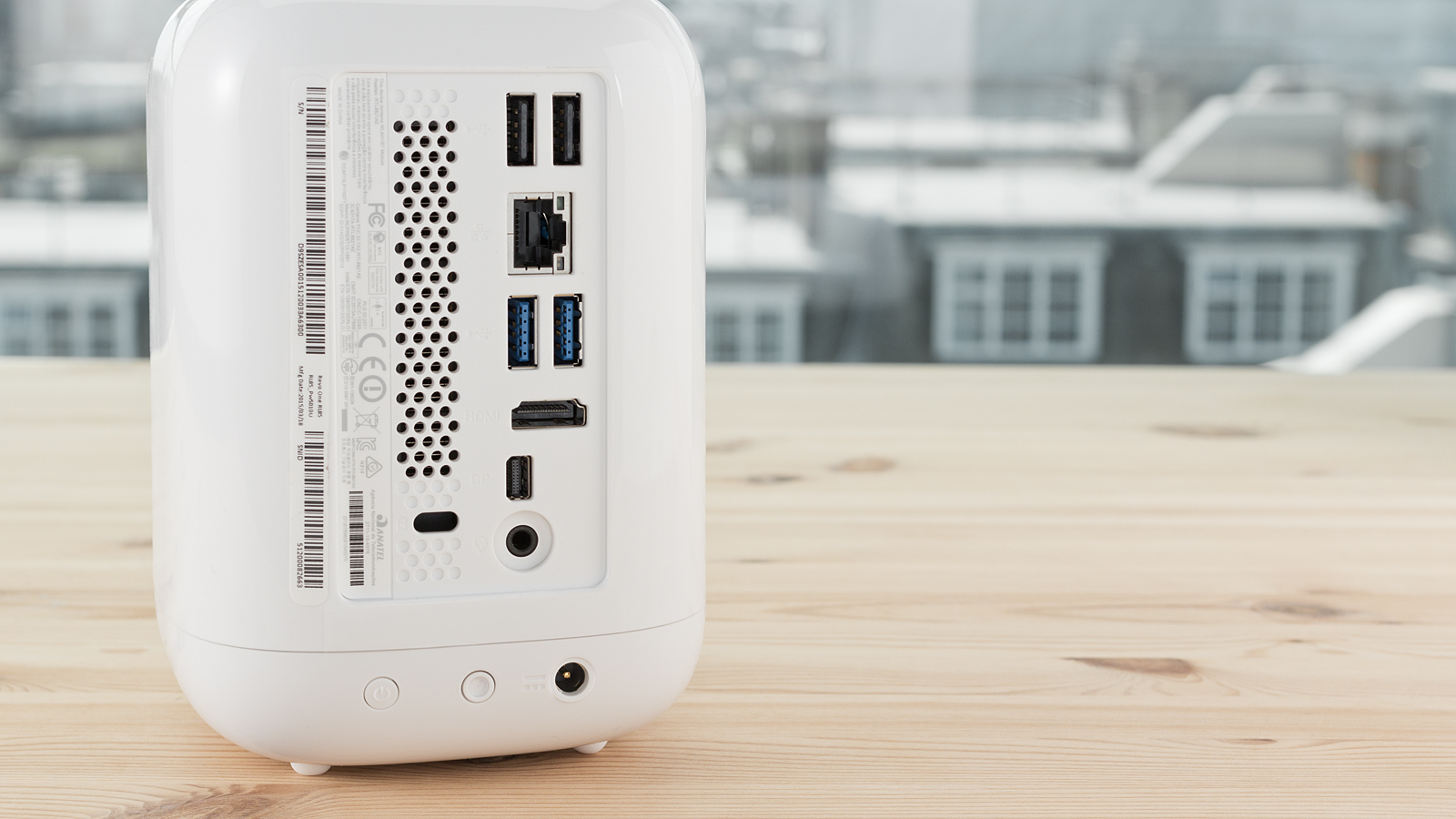 Inside is 11ac Wi-Fi (single stream) and Bluetooth and there are plenty of ports on the back including HDMI, Mini DisplayPort (version 1.2 which supports 60Hz 4K output), two USB 2.0 ports, two USB 3.0 ports and Ethernet. An SD card slot sits hidden on the top beside the notifications LEDs (three for each hard drive and one for network).

It does get a little confusing as there are various SKUs available depending on what chip you want, amount of RAM and storage so have a think about what you want before buying.

Unfortunately, the model we’ve been sent for review won’t be on sale in the UK but is close(ish) to the pounds 399 model above. It has a 2.1GHz Core i3-5010U, three 1.5TB SATA hard drives (2.5in) in a RAID 5 configuration and 8GB of RAM. Our benchmark results are for this model only and note that both are mobile processors which are really with power consumption in mind rather than focussing on performance.

In our Geekbench 3 processor and memory test, the Revo One manages scores of 1937 and 4106 for single- and multi-core speed respectively. This is a little way off the most recent Mac mini which has a 1.4GHz Core i5 and 4GB of RAM – it scored 2803 and 5401 points. In PCMark 8, we recorded scores of 1829 for the conventional test and 2200 for accelerated. Both are middle of the road for a device with an Intel Core processor.

Although the Revo has a newer 5th generation mobile Broadwell chip, these do not have a Turbo mode to hit higher clock speeds and that’s likely to be the reason for lower scores compared to the Mac mini.

As mentioned, our sample is configured in RAID 5 meaning that one of the three drives can go wrong and no data will be lost. We like the way two can be removed without tools by simply popping the case off and pulling a drive out but if the drive which isn’t visible goes then you’re in for a much trickier job removing various screws and casing. 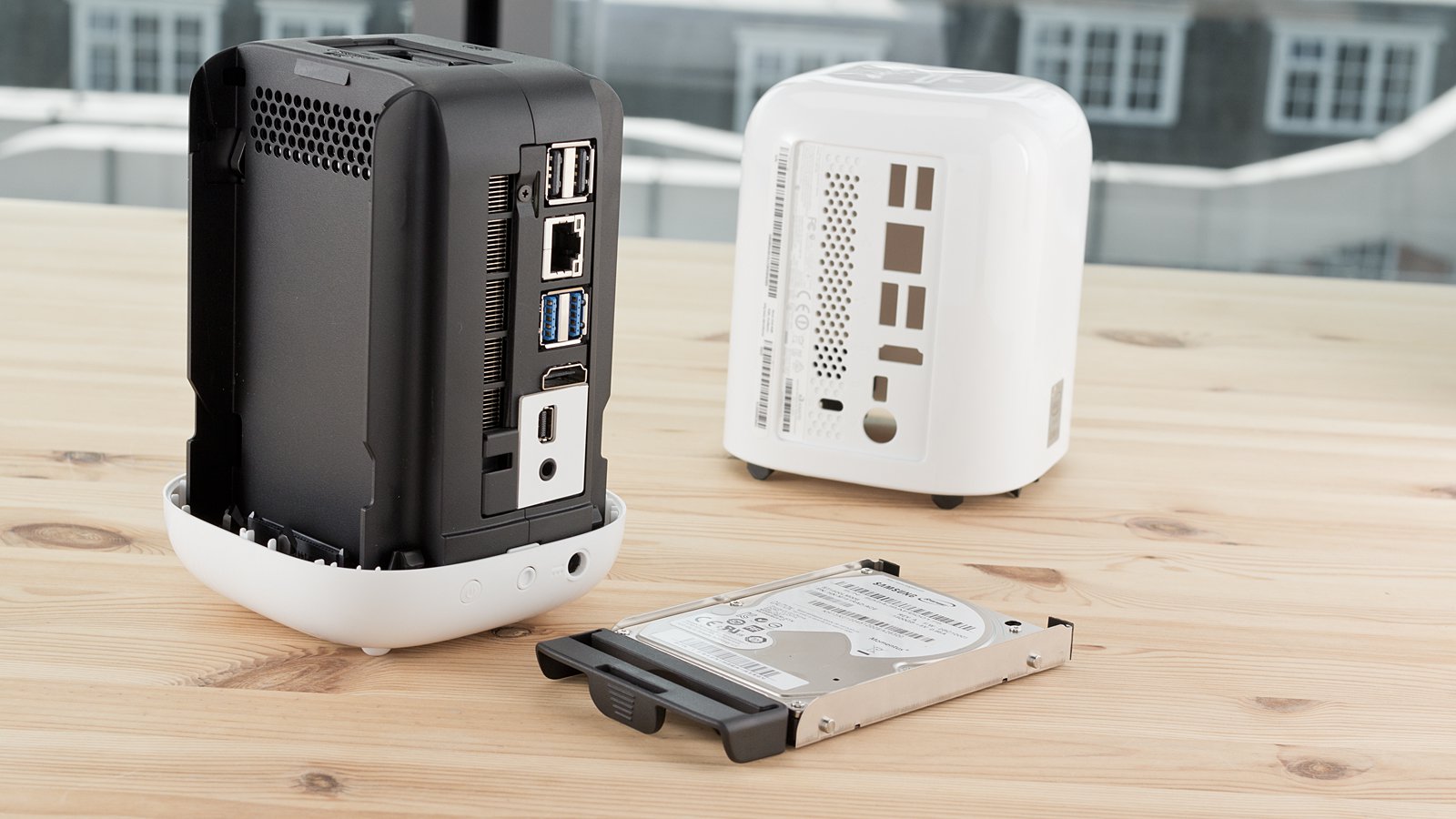 Our hard drive tests show the Revo One can read and write sequentially at 183- and 56MBps, dropping to 99- and 52MBps for network file transfer. It’s the write speed which is the main worry here which we’d hope to be double. So using the Revo as a NAS drive will be fine for streaming content but you’ll be in for some finger drumming while waiting for files to be uploaded. It’s also worrying to see low speeds for small files which Windows uses a lot. 4K files read and write at 0.38- and 0.35MBps respectively.

Whether it’s down to the processor or the RAID 5 configuration of the hard drives (or both) the Revo One RL85 feels sluggish in use quite often which is a real shame. We recommend you opt for a model with an SSD which should solve this issue but as mentioned we can only comment on the one we tested.

On the graphics side of things, using the built-in Intel HD Graphics 5500 (which will be 4400 on the UK Core i3 mode), we found the Acer Revo One could manage an average of 29fps in Batman Arkham City at Medium detail and 720p resolution – a very similar result to the Mac mini mentioned above. That sounds promising but the minimum framerate was just 16 so there will be stutter. Even lowering the detail to low only raised these figures by one or two frames so this really shouldn’t be viewed as a gaming machine.

Before you click through to the verdict, it’s worth pointing out that the Revo One runs essentially silently. There’s a fan for cooling but we never heard any audible sound from the pint-sized PC which is great for use as a media device or just keeping your study quietly calm.

The Acer Revo One is one of the most interesting PCs we’ve seen a while packing a lot of hardware into a tiny space. It’s so small you could use it anywhere in the house without a problem. The remote control is a little fiddly and you’re going to be better off with a cheap streamer for accessing catch-up and on-demand content. Unfortunately, lower than expected performance (for our sample SKU at least) means that this isn’t the best PC around either so a model with an SSD is probably a good move to provide more zip.

Don't miss a deal at Groupon
Best offers at Carphone Warehouse
Discounts, Sales and Deals at Boohoo
Save your money with TalkTalk Phone and Broadband
Online-Shopping with Brian Tracy
Best products at Myprotein
Latest Posts