The XPG Gammix S50 Lite didn’t benchmark the fastest of the 4th-gen PCIe M.2 NVMe SSDs we’ve reviewed, but it proved nearly as quick as the best of them with real-world transfers. It’s also considerably cheaper than previous PCIe 4 drives, which hopefully portends the end of early-adopter (read: high) pricing in this segment of the SSD market.

The XPG Gammix S50 Lite is an x4 PCIe gen 4 using 96-layer TLC (Triple-Level Cell/3-bit) NAND and a Silicon Motion SM2267 controller. The drive sports a dark-silver heat spreader, with the XPG logo featured prominently on the top side.

The S50 Lite comes in two flavors: 1TB for $140 on Amazon and 2TB (the capacity we tested) for $260 on Amazon. Both drives are also available on parent company Adata’s website for the same prices currently: $140 for 1TB and $260 for 2TB. Those are very low prices for a PCIe 4 SSD. 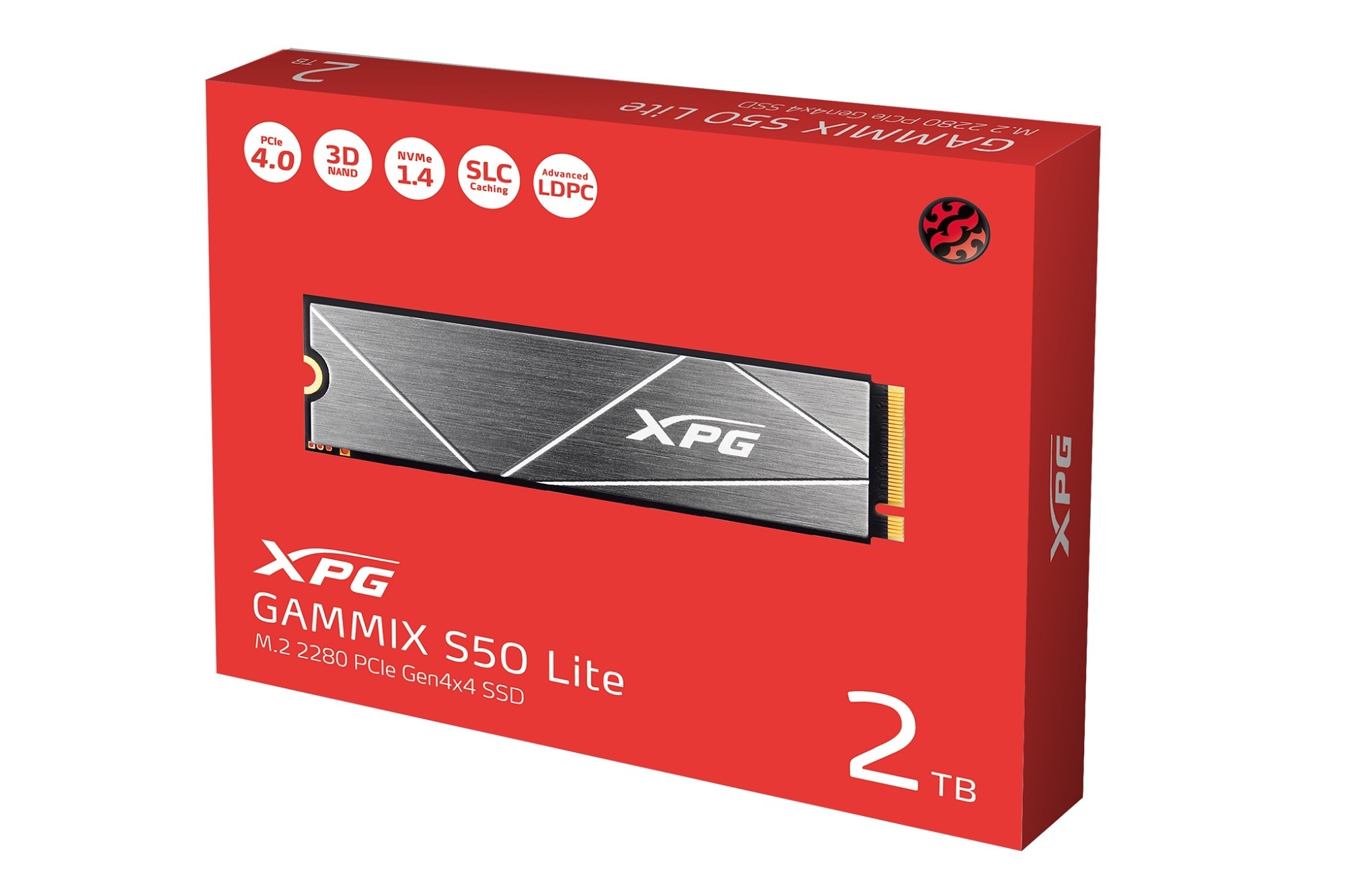 XPG warranties the S50 Lite drive for five years, and it’s rated for 740TBW per 1TB of capacity, i.e. TeraBytes Written over the life of the drive. That’s a somewhat low rating in the grand scheme, but in line with that of similarly priced PCIe 3 drives. In truth, you’re unlikely to write (reads don’t count) that much data to the drive in a decade.

Okay, the S50 Lite is no Samsung 980 Pro. But neither is anything else. We tested it using both the PCIe 4 (yellow bar) and PCIe 3 (green bar) interfaces. It got smoked in the synthetic benchmarks, but when it came to real-world performance the S50 Lite was surprisingly competitive. Considering the price differential, value-conscious users will likely opt to give up a few seconds here or there. 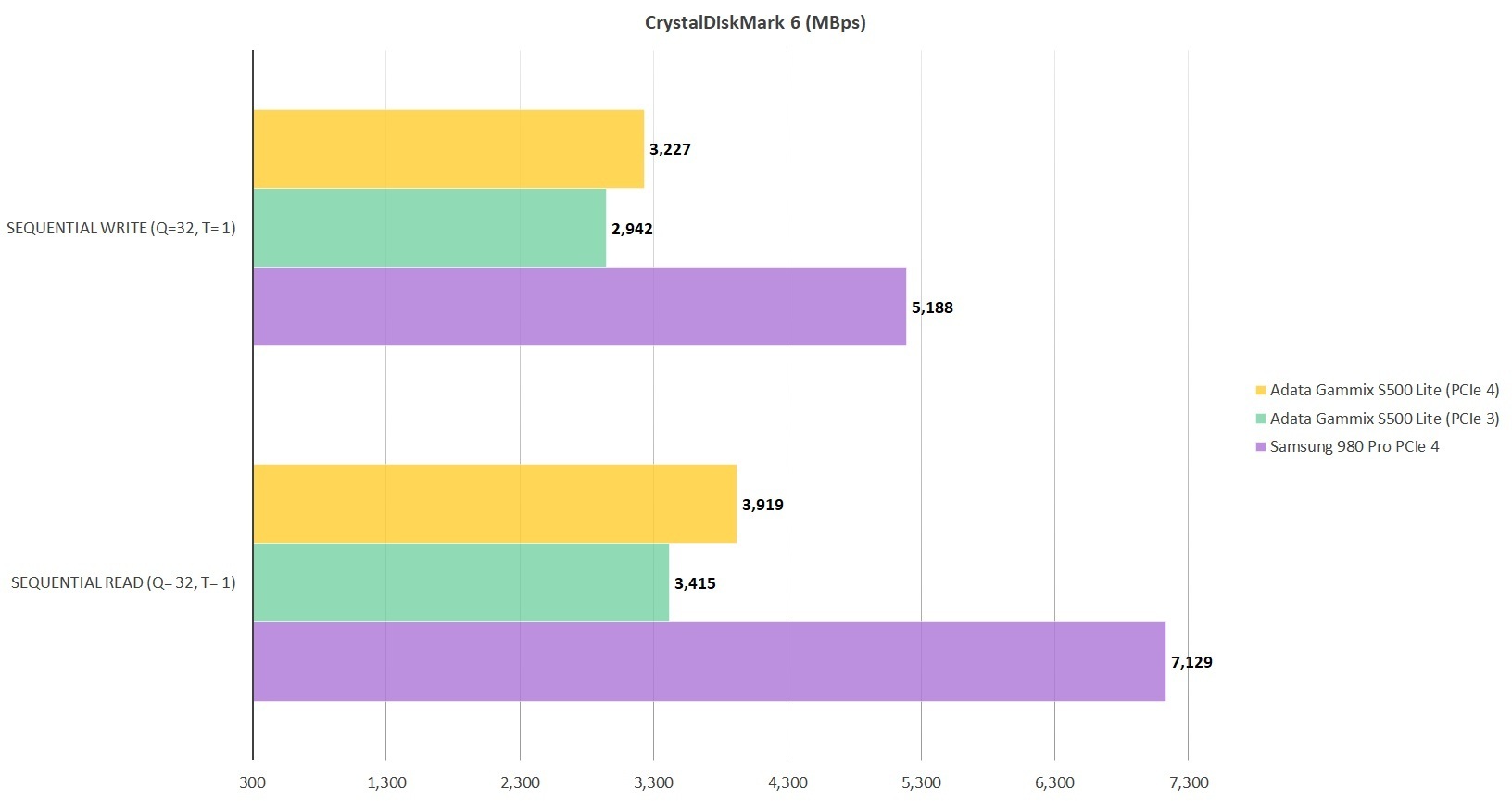 As you can see above, the S50 Lite doesn’t deliver nearly the CrystalDiskMark 6 numbers than the Samsung 980 Pro does. Neither do other PCIe 4 SSDs. However, when it came to our 48GB transfers, the S50 Lite hung in there—and then some. 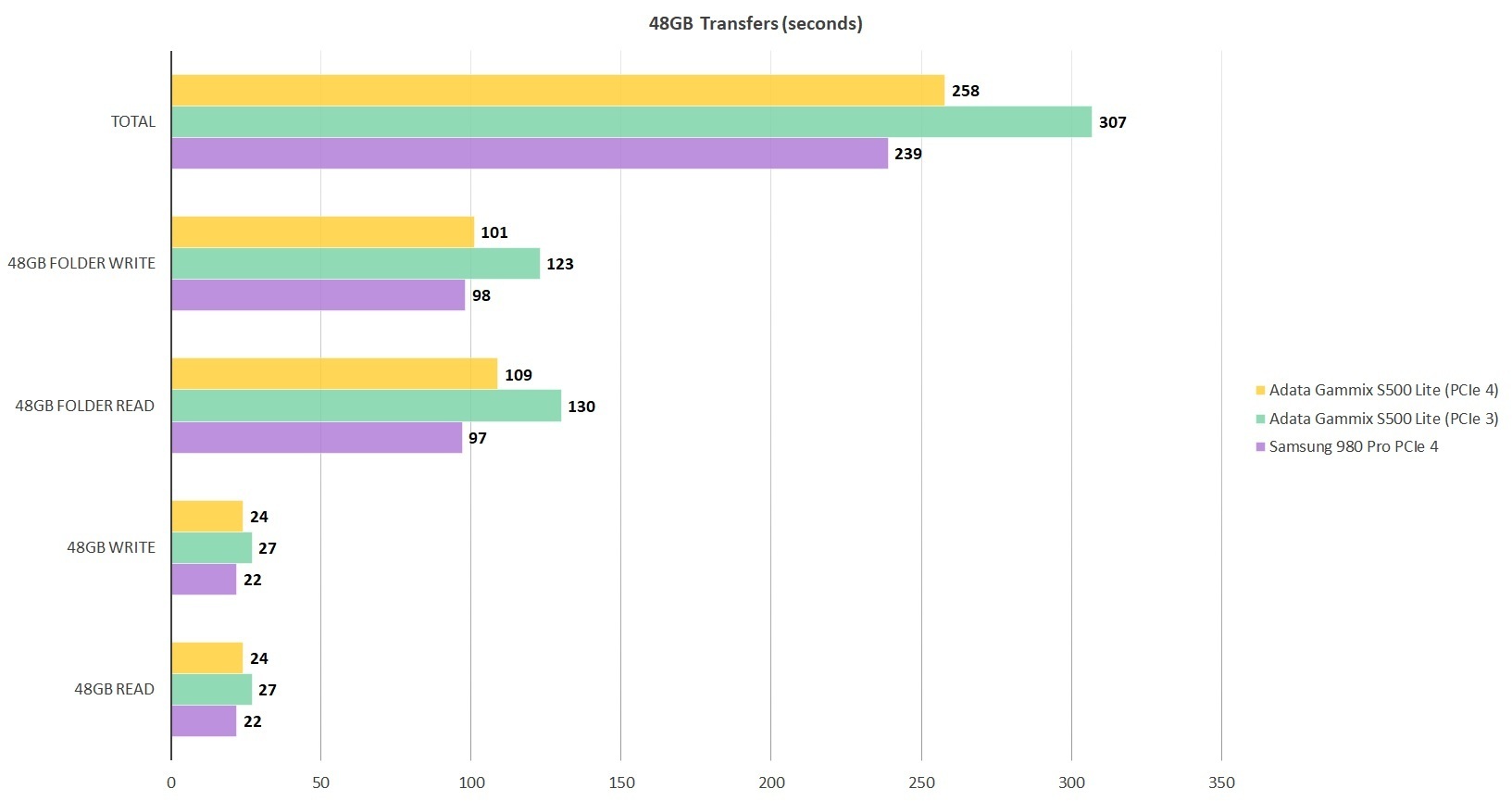 The S50 Lite maintained well over 1.5GBps during the majority of our 450GB write test, then with around 100GB to go, it fell to around 500MBps. It will likely drop in speed sooner with the 1TB drive, thanks to less NAND being available for caching. I did not have a 1TB model to test.

It also proved somewhat inconsistent at where it dropped in speed. Once it was at the beginning and then at the end. With most affordable SSDs, the controller is trying to allocate NAND as SLC secondary cache as necessary. It doesn’t always crystal-ball it correctly.

The S50 Lite never equaled its initial 450GB write performance (PCIe 3 was tested first) of just over 8 minutes, falling somewhere between 9 and 10 during all subsequent iterations. That said, I’m not sure why it was so much slower on our PCIe 4 test bed described below. 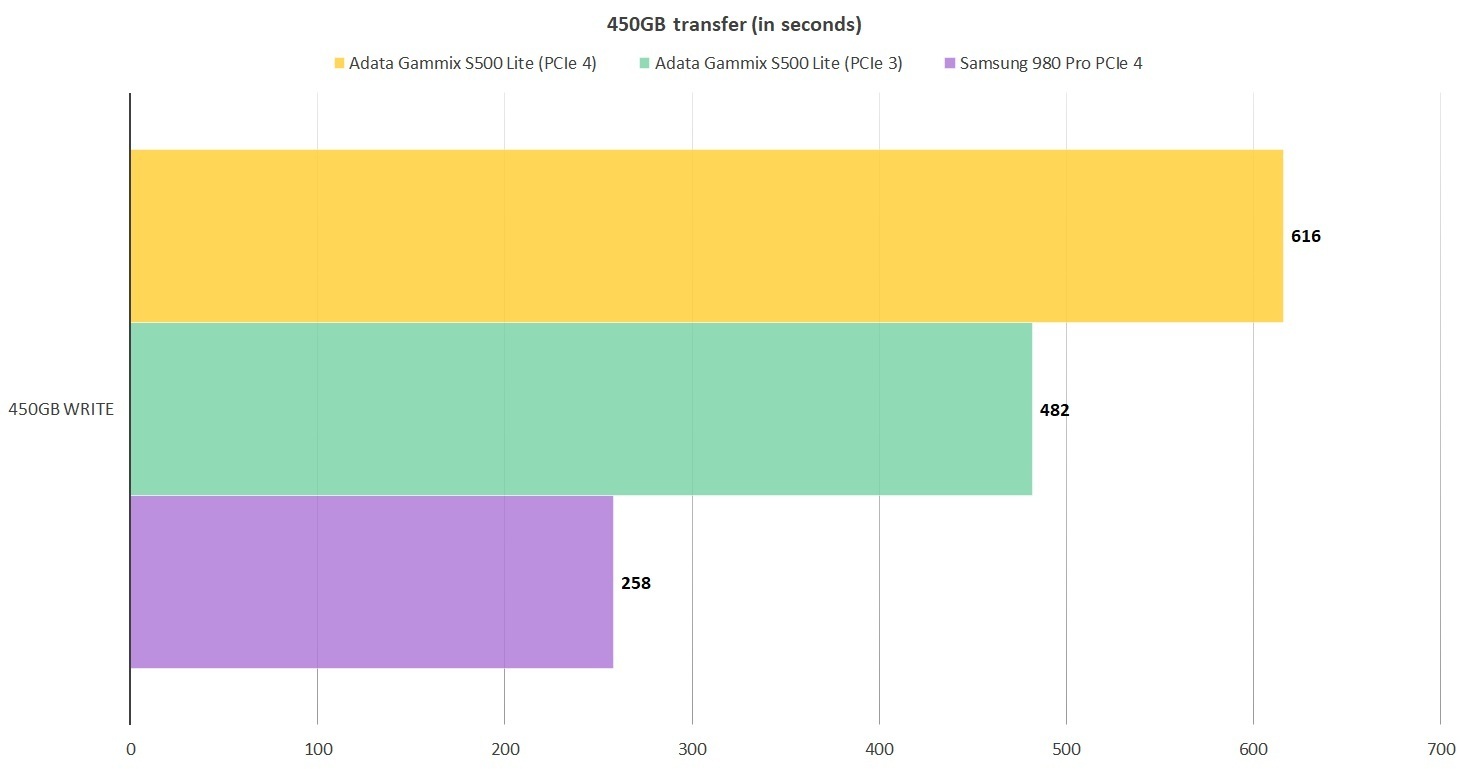 The S50 Lite formatted a bit slower than many SSDs, taking nearly 30 seconds (5 seconds is the norm). It was also particularly slow during the Windows Optimize/TRIM operation. Many drives aren’t actually doing their housekeeping during the Windows optimize countdown, but simply noting that it should be done, then deferring it until later. It seems the S50 Lite may have actually been performing the necessary housekeeping in real time. When asked, XPG neither confirmed nor denied our hypothesis.

PCIe 4 performance on the cheap

The XPG Gammix S50 Lite is the first PCIe 4 SSD we’ve tested that doesn’t carry a hefty next-gen surcharge. In the real world, you’d be hard-pressed to tell the difference between a system running it, and one running the far more expensive Samsung 980 Pro. Very long transfers aside, it’s a very good deal.

If the Samsung 980 Pro is too rich for your blood, the XPG Gammix S50 Lite is an excellent real-world PCIe 4 performer that costs less than half the price of such leading drives. For the average user, it’s the better deal.

Don't miss a deal at Go Daddy
Best offers at John Lewis
Discounts, Sales and Deals at Farfetch
Save your money with House of Fraser
Online-Shopping with Argos
Best products at Mobiles
Latest Posts