Xiaomi might be best known for its value-packed smartphones, but in 2017 it released a more affordable mimic of Apple’s much-loved MacBook Air laptop. The Xiaomi Mi Laptop Air obviously attracted plenty of ‘Apple clone’ comments, just like some of Xiaomi’s handsets, although I’m guessing that the Chinese giant was quite happy with this comparison. Even the naming of this notebook seemed to welcome such parallels, while the design appeared to draw more than a little inspiration from those premium machines.

Well, Xiaomi is back at it again in 2018, with a refreshed version of the Mi Laptop Air 13.3 hitting stores this August. This new model boasts updated specs, thankfully with no compromise to the slim and light design. But is the Mi Laptop still a respectable alternative to the Macbook Air and other rivals like the LG Gram and Huawei’s Matebook X Pro?

Editor’s note: We’ve yet to give the Mi Laptop Air 13.3 a score until Xiaomi announces UK pricing and availability. 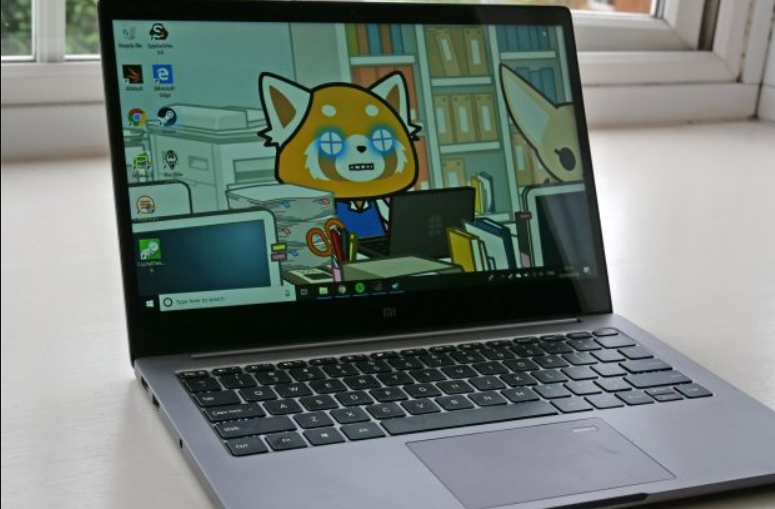 My first moments with the new Mi Laptop Air were kind of an emotional rollercoaster. Immediately after pulling it out of the box, I couldn’t help but be impressed by the reasonably slender and super-light 1.3kg chassis. This notebook weighs more or less the same as rivals like the Matebook X Pro and Dell’s XPS 13, with a compact finish for slipping into pretty much any bag.

Intrigue and delight gave way to confusion, however, when I realised that the Mi Laptop Air’s lid was completely plain. No logo, no design, no nothing. That in itself isn’t a bad thing of course, just very unusual – and it meant that every time I pulled the thing from my backpack, I had no idea which way it opened. A minor gripe, but one that could have been easily avoided.

Some costs certainly appear to have been cut when it comes to the overall design, but the Mi Laptop Air doesn’t feel cheap. It’s solidly constructed throughout, from the firm lid and chassis to the fluid-yet-rigid hinge. Just don’t expect any seductive curves or stylish flourishes. There’s no tapering as you move from hinge to lip, no frills or fancy bits to speak of. Basically, this notebook feels like it was invented by the same machine that punched it out of a solid slab of aluminium.

Like Apple’s Macbook Air machines and most other compact laptops, Xiaomi’s notebook suffers a little when it comes to connectivity. This chassis is a little thicker than many rivals, so the manufacturer has managed to cram an HDMI port onto the left edge, which is great to see. Besides that however, you only get two USB 3.0 ports and a solitary USB Type-C 3.1. If you’re using this to charge the Mi Laptop Air, that means you’ll have to keep yanking out the power cable to attach other Type-C peripherals like an external drive.

Still, considering the slim port pickings on most of the competition, it’s hard to complain. 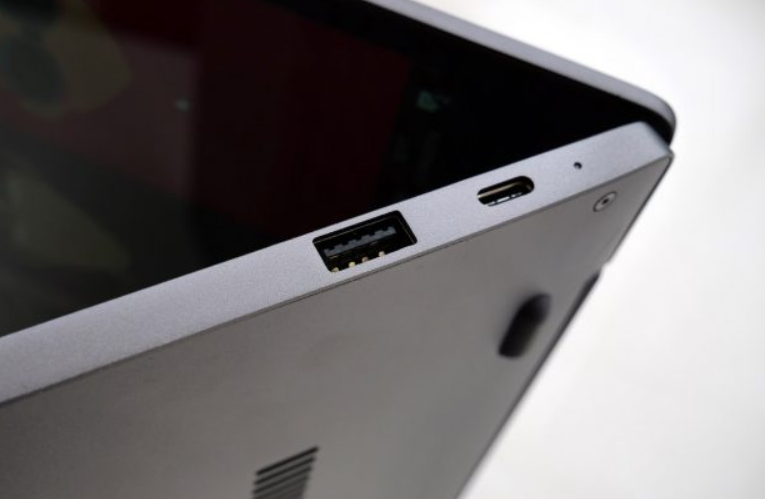 As far as the keyboard goes, this laptop once again shares a lot of DNA with Apple’s Macbooks. Unsurprisingly, it’s a chiclet-style board, offering well-spaced keys that are a good size and distribution for ultra-fast touch typing. Coming straight from a Macbook Pro, there was no adjustment period; I was smashing out scripts and reviews at top speed from the off.

At first the keyboard was surprisingly noisy, a particularly jarring experience when using the Mi Laptop Air at night. Thankfully after a day or so of using the device, this problem seemed to cure itself.

However, while the majority of the keys are a good size considering the 13.3-inch dimensions, Xiaomi has committed a cardinal sin. Namely, squashing the Enter key into a single row. As with the Huawei Matebook X Pro, I found myself constantly bashing the key above by accident. Also, our review model used a non-standard layout, with functions such as “ and @ swapped around. Here’s hoping that a proper UK version which lets one type in the Queen’s English is released to these shores.

The keyboard is fully backlit, so you can graft over that werewolf romance novel in the wee hours without disturbing your bed partner much. You don’t get different levels of backlighting however, beyond ‘on’ and ‘off’.

Xiaomi hasn’t included touchscreen controls, although the spacious touchpad is absolutely fine. From the smooth action to the responsive multi-touch, this is certainly one of the better pads I’ve used lately. Even pushing the corners for left and right mouse clicks doesn’t send the cursor skidding across the screen like a teenage joyrider.

Built into the top-right corner of the pad is a narrow fingerprint sensor, which offers a decent alternative to inputting a password each time you want to unlock the Mi Laptop Air. Quite often I had to press my fingertip against the pad a couple of times before it recognised me, possibly because it’s so tiny and in a less convenient position than the Macbook’s TouchID. Still, even with a double-tap, it’s a faster method than passwords. 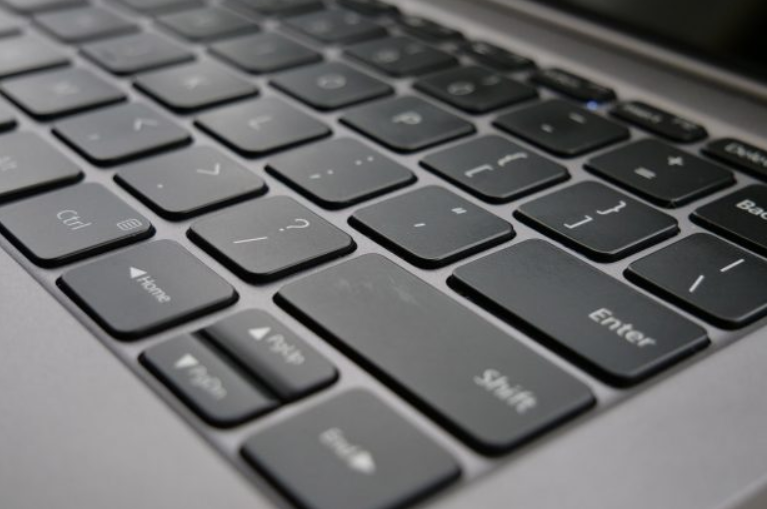 One area where Apple’s Macbooks are clearly the superior machine is the display. The Mi Laptop Air struggles to match its premium-priced rival when it comes to producing realistic images and punchy visuals, although this screen is perfectly fine for everyday tasks.

As far as realism goes, 95% of the sRGB gamut is covered by Xiaomi’s panel. That’s good, although many rivals such as the LG Gram and XPS 13 offer pretty much full coverage. If you’re into AdobeRGB for photography, you can expect 74% coverage – not so good.

Contrast levels on the default display settings were recorded as 870:1, while the 6708k colour temperature is close to the ideal daytime setting of 6500k. As always, you can manually tweak this for a warmer output in low light situations.

On maximum brightness the Mi Laptop Air only reaches 230 nits, well short of what we’d like for outdoor use. Sure enough, it’s a struggle to see what you’re doing when you’re sat in the garden on a sunny day, and that’s before you even consider kicking back with a murky, moody horror movie on Netflix.

Still, the Full HD resolution means crisp visuals, and I was happy enough with the performance for movie streaming. It’s not a premium panel, but it’s no slouch either. 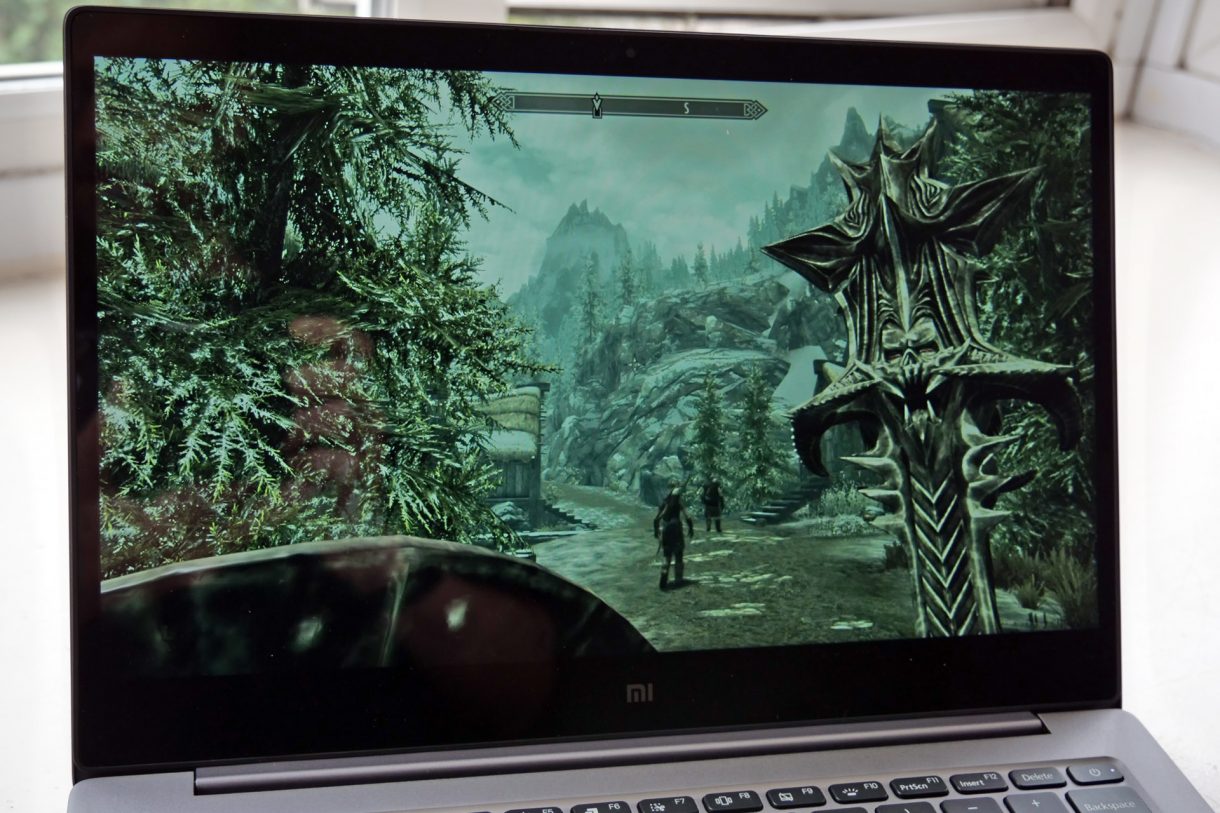 While the new Macbook laptops feature top-facing speakers to blast audio at your face, the Mi Laptop Air 13.3 packs them down below. Yet while these fire sound directly into your desk or lap, they pack enough power to compensate. Audio is slightly muffled of course, but I had no trouble making out quiet dialogue scenes in movies and the like.

On top volume, music does sound rather garbled, as with most dedicated laptop speakers. You’ll want to connect to some decent headphones or a separate speaker to rock out to your tunes.

When it comes to performance, the Mi Laptop Air 13.3 holds its own against similarly-priced rivals and more expensive machines.

Packed inside is an 8th-gen Intel Core i5-8250U chipset, with a 1.6GHz clock speed. This is backed by 8GB of memory, and the result is a smooth everyday experience. Multi-tasking with lots of applications, or messing around with a couple dozen Chrome tabs open at once, won’t bring the laptop crashing to a halt.

Like the Matebook X Pro before it, this notebook also packs Nvidia’s GeForce MX150 dedicated graphics, which is definitely impressive considering the sub-£1000 asking price. While this can’t exactly play the latest titles with a silky smooth frame rate, it’s absolutely fine for older games – even ones that were demanding at the time. Skyrim plays on high detail levels with a perfect frame rate, even when battling those pesky dragons.

That’s helped by the swift 256GB SSD packed into the Mi Laptop Air. Our benchmarking tests registered write speeds of just over 3100Mbps, although the write speeds were significantly less at 329.2Mbps.

While the Mi Laptop Air is certainly portable in terms of its size and weight, this notebook stumbles somewhat when it comes to battery life.

With standard use (working in a web browser while streaming music), I found that the notebook was drained in under five hours. Certainly a surprise, given that rivals such as the Matebook X Pro and the LG Gram tend to last for a full working day.

The standard Trusted Reviews battery test threw up an identical result. With a non-stop loop of web browsing and video playback, Xiaomi’s laptop lasted a meagre four hours and 40 minutes. It’s the kind of performance we’d expect from a more powerful machine, and it seriously hampers the portability. If you’re taking the Mi Laptop Air to work each day, you’ll need to remember the adapter too.

If you always fancied an Apple MacBook Air but balked at the ridiculous asking price, Xiaomi’s second-gen Mi Laptop Air 13.3 could be the answer. This compact notebook isn’t as sexy, the display isn’t quite as stunning and the battery life won’t see you through a full day, but there’s still plenty to like here if you can live with these compromises.

From the solid and dependable performance, complete with dedicated graphics, to the strong usability, the Mi Laptop Air frequently punches above its weight. I enjoyed using it for everyday work and play, substandard battery life aside.

Xiaomi’s latest laptop looks the business, boasting dedicated graphics and a stylish design, but our final verdict is really going to be decided by the price; this will either be a killer bargain or an overpriced clonebook.

Don't miss a deal at John Lewis
Best offers at Marks and Spencer
Discounts, Sales and Deals at Vimeo
Save your money with Ticketmaster UK
Online-Shopping with Argos
Best products at Vodafone UK
Latest Posts