When it comes to data storage, faster is the name of the game. WD is currently at the top of that game. Not only is the company’s 2020 My Passport SSD twice as fast as its like-named predecessor, it’s a shade faster than the USB 10Gbps competition.

It’s also extremely light in your pocket—its feathery heft was the first thing I noticed about it. Marry those two best-in-class attributes to affordable pricing, and you might say that WD has itself a winner. You might, I am.

The My Passport SSD sports rounded corners and seashell sculpting across half the drive. It adds grip and style to an otherwise smooth, low-friction body. It’s on the small side at approximately 4 x 2 x 0.3 inches, and it weighs a feathery 1.6 ounces. That’s a boon for travelers, but if I’m completely honest, I like things with a bit more heft to them.

The drive utilizes a Type-C connector, and a Type-C to Type-C cable with Type-C to Type-A adapter are included in the box. The USB implementation is USB 3.2 Gen 2, also known as SuperSpeed 10Gbps, depending on which of the USB Forum’s ludicrous naming conventions you prefer.

The older WD My Passport SSD was also 10Gbps, but WD upgraded the internals from SATA (550MBps max over any bus) to far faster NVMe with its own SN550 SSD to deliver a more than two-fold improvement in performance. 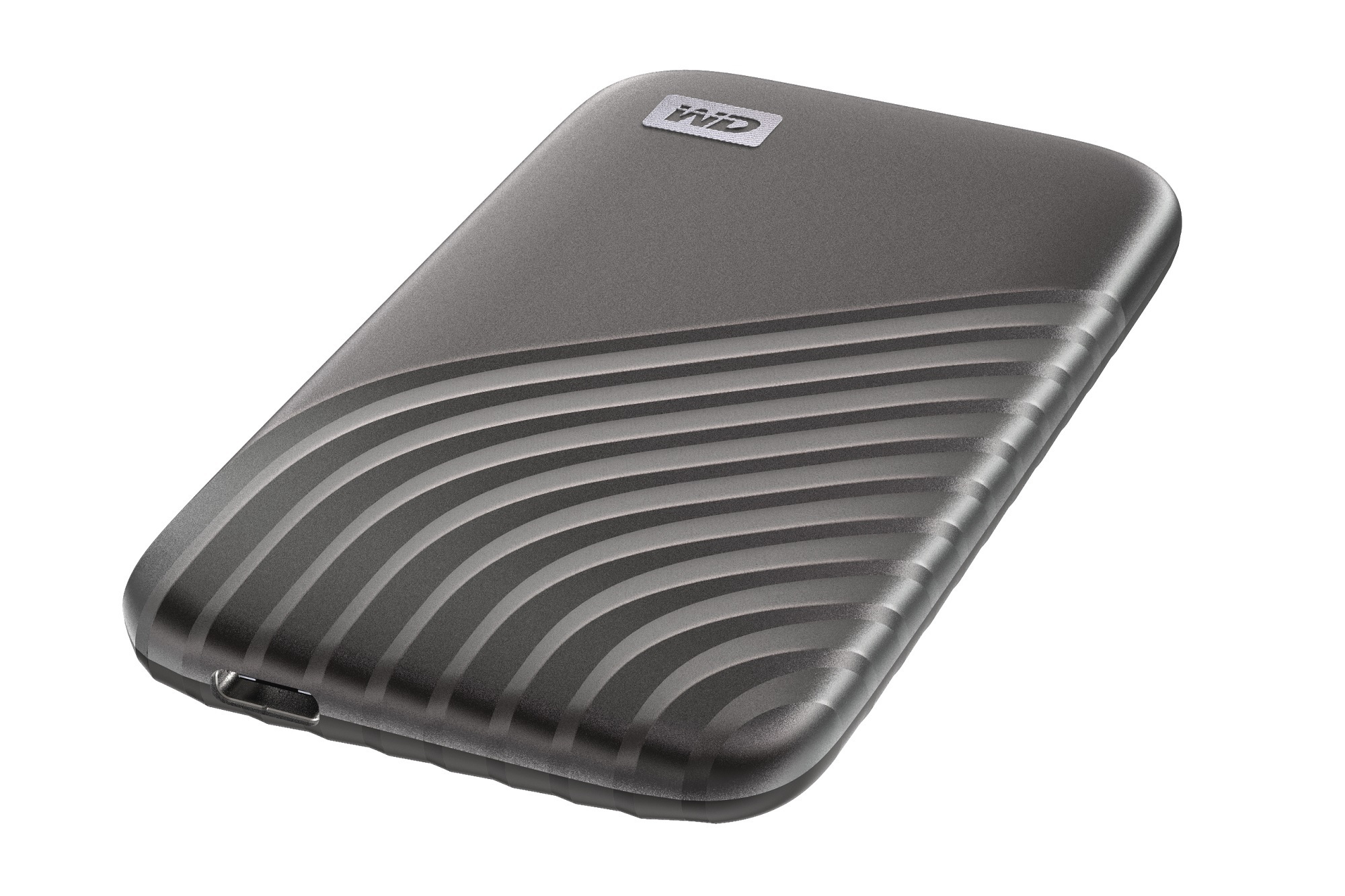 The warranty is a reassuring five years, though there’s no TBW rating, i.e., TeraBytes that may be Written over the life of the drive. When sold separately, SN550 SSD inside the My Passport SSD is rated fr 300TBW per 500GB of capacity. That’s more data than the average user is likely to write to an external drive in two decades.In other words, don’t worry about it.

Don’t worry about dropping the My Passport SSD, either. With no moving parts, you’d have to hit most portable SSDs with a hammer to damage them. Even then it’s not a given. Liquid won’t damage them either if they’re not plugged in, assuming you give them time to dry completely before further use.

I already gave away the majority of the performance story, but by the numbers, the My Passport SSD 2020 (gold bars in the charts) scored just over 1GBps reading and writing under CrystalDiskMark 6. As you can see below, that’s actually more than twice as fast as the pre-2020 version. 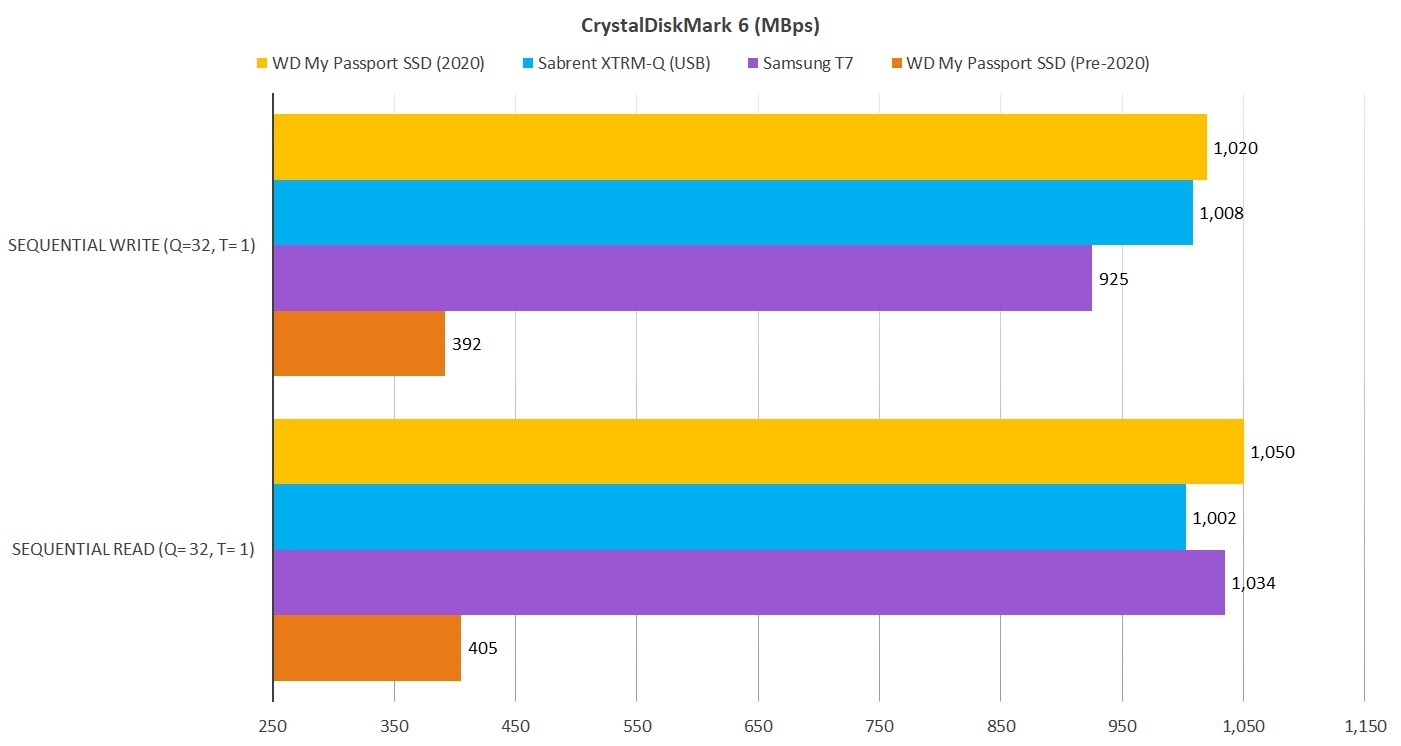 The 2020 WD My Passport SSD not only aced the synthetic benchmarks, it also proved cream-of-the-crop in our real-world 48GB transfers. Note that real world performance is always slower than what you see with synthetic benchmarks. Largely due to file system and operating system overhead. The 48GB large file performance still works out to a cool 550MBps writing and 750MBps reading.

The My Passport SSD also averaged around 564MBps during our 450GB write test, meaning it doesn’t slow down off cache. It also delivered 0.08-millisecond seeks while reading and 0.8 ms when writing. By way of comparison, external hard drives average around 10 ms to 12 ms these days.

A great drive for the majority of users

The 2020 My Passport SSD is the fastest, lightest 10Gbps USB drive we’ve ever tested. It hits the nail on the head for the average user.

The only faster external USB drives are 20Gbps units such as the WD Black P50 Game SSD or Seagate FireCuda Gaming SSD. Alas, those require the rare USB 3.2 Gen 2X2 (Superspeed 20Gbps) bus, cost twice as much, and don’t fare much better in our 48GB transfer tests. Stick with the 2020 My Passport SSD unless you’ve got money to burn.

The My Passport SSD is fast, super-light, and nicely priced. You can get a faster drive if you go USB Gen 2×2 (20Gbps), but you’ll also pay a whole lot more. For the average user, this is currently the portable SSD to buy.

Previous ArticleThis is the cheapest 6-core PC on the market, but it has one big flaw
Next ArticleThis Xbox Series X feature gives more control over storage – if developers opt in
Comments (0)

Don't miss a deal at Microsoft Store
Best offers at The Home Depot
Discounts, Sales and Deals at Boohoo
Save your money with Farfetch
Online-Shopping with Nike DE
Best products at Ancestry
Latest Posts