Late last year Turtle Beach stunned me with the Elite Atlas. After years of frankly unimpressive budget headsets, here was a truly beautiful bit of design work—and a PC-first headset, too. It gave me hope for the brand, and some interest in what would come next.

And what came next turns out to be a wireless version, the Turtle Beach Elite Atlas Aero. It’s a mouthful of a name, sure, but can it overcome that unfortunate stumbling block and recapture the magic of its wired predecessor? I put it through its paces to find out.

Despite the name, the Elite Atlas Aero isn’t quite a one-to-one reproduction of the Elite Atlas. It’s similar though, with generally the same elements as its wired compatriot—piano black earcups, minimal branding, floating headband. 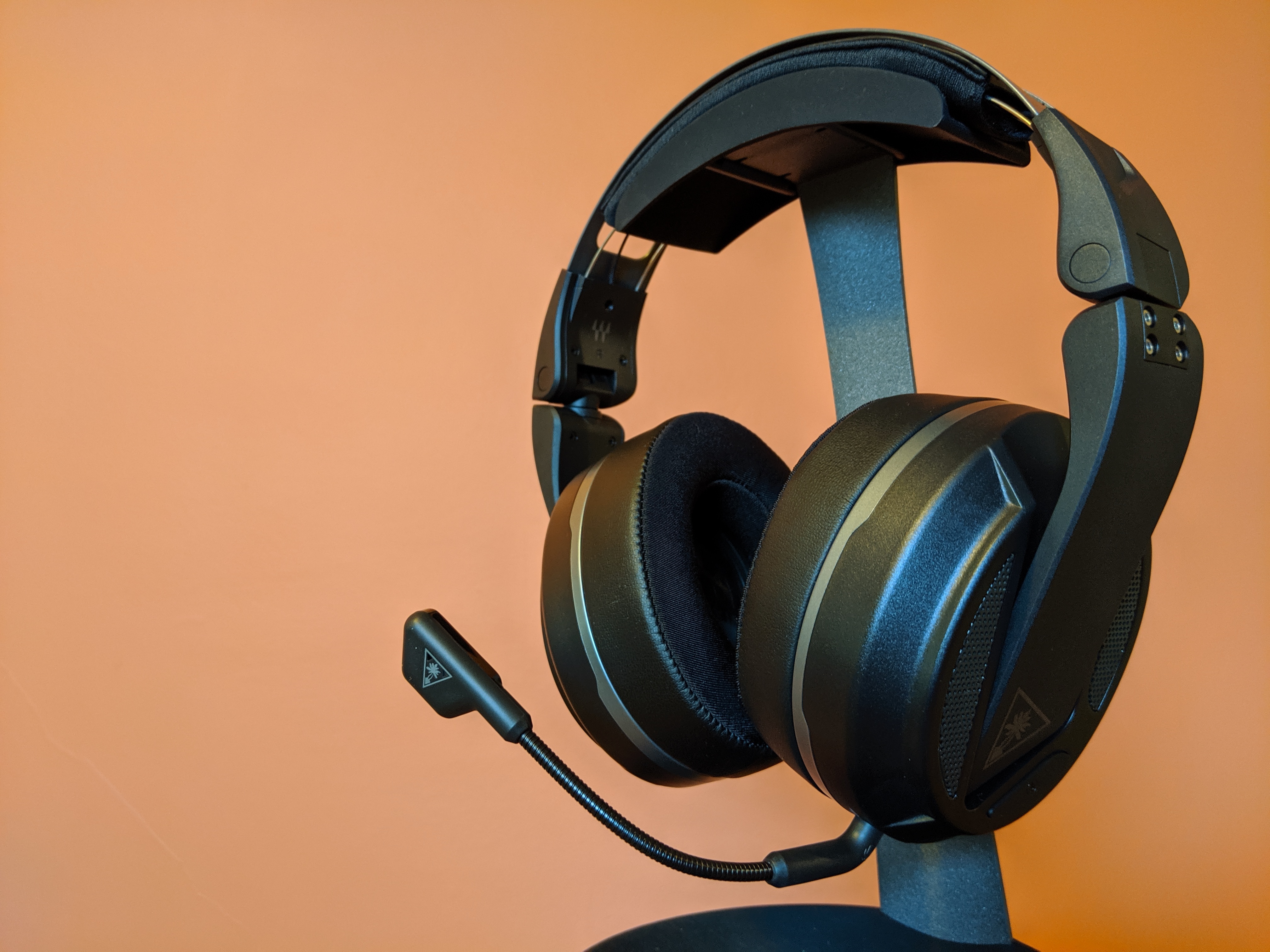 A year in, I still really like the Atlas. It punches well above its weight as a $100 wired headset, and the design’s only slightly less remarkable repurposed for a $150 wireless model. And again, it’s doubly impressive coming from Turtle Beach. The last wireless Turtle Beach model we tested was the Stealth 700, which cost almost as much as the Atlas Aero ($130) but which, as I said in our review, suffered from “an abundance of plastic.”

The Atlas Aero uses metal sparingly, but even so it improves the look and feel immensely. It’s solid, durable, and without the rattling I associate with Turtle Beach’s chintzier plastic headsets. The silver headband is a slick contrast to the rest, and the grills on the earcups lend them some much-needed texture.

Is it my all-time favorite? No, but the Aero stands up perfectly fine next to Turtle Beach’s peers and that’s what matters. After many years spent lagging behind, Turtle Beach is making a compelling case for itself again. 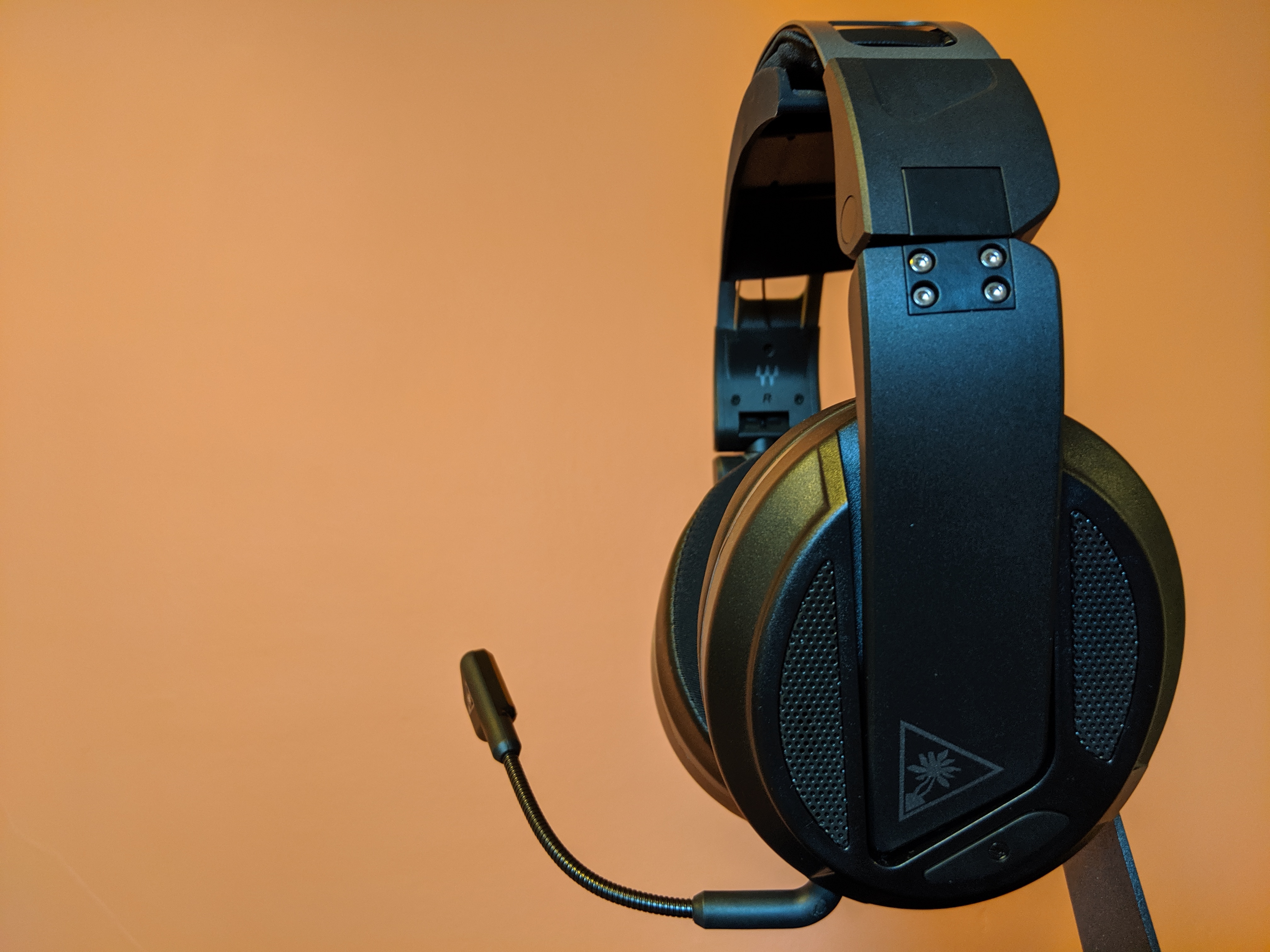 And like the original Atlas, the Aero is surprisingly comfortable as well. One of the few noteworthy design changes, the Aero’s earcups attach to the headband with a new pivoting hinge, which allows it to fold up small when not in use. The hinge hasn’t had any negative impact on comfort though. Like the Elite Atlas, the Atlas Aero is snug without squeezing too hard.

The earcups are also a credit to Turtle Beach. Sheathed in microfiber and packed with cooling gel, they’re generously padded and have kept relatively cool even during San Francisco’s hottest October weather. And while I don’t wear glasses, I remain impressed by Turtle Beach’s ProSpecs tech, which creates a channel through the padding to alleviate pressure on the temples. It’s a smart idea, and almost a shame Turtle Beach has a patent on it, as I wish it were more widespread. I hear a lot of complaints about headsets and glasses. If that applies to you, the Atlas Aero might be your best option.

Peel off the right ear pad and you’ll find a spot for the USB dongle. Dongle storage is always one of my favorite features, as someone who ends up with a bunch of headsets kicking around. It’s hard not to lose those little sticks. Turtle Beach’s solution is a bit awkward and overly hidden, but it exists and that’s what matters. 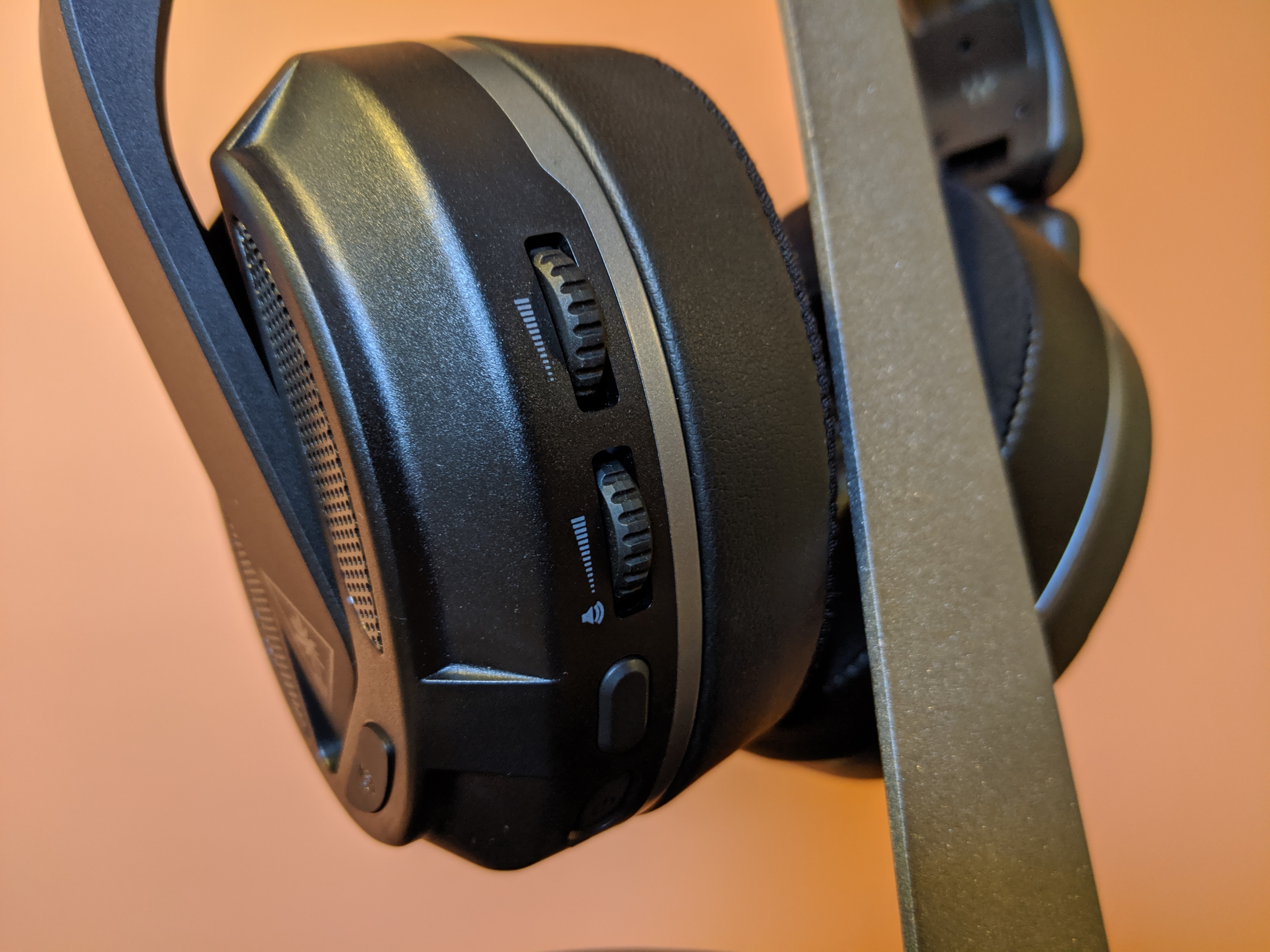 Wireless headsets also need built-in controls, which happens to be the key difference—or rather, improvement—between the Atlas Aero and its wired sibling. The cheap in-line controls felt like a compromise on the wired Elite Atlas, so I’m happy to see a more bespoke solution on the Atlas Aero.

Arrayed down the back of the left ear you’ll find a volume wheel, power button, and a remappable button that defaults to activating Turtle Beach’s “Superhuman Hearing” mode (more on that later). There’s a second wheel, also remappable, but which defaults to adjusting the amount of sidetone, or how much you can hear yourself in the headset as you talk. Having that mapped to a wheel is a bit odd, given it’s a feature I basically set once and forget. There are plenty of other options though, including a “Game/Chat Mix” function—a coup for Turtle Beach, given that’s a feature associated mostly with Astro’s high-end A50 headset. You’ll find it here for half the price.

The Atlas Aero’s USB connection opens up all sorts of options, actually. The original Elite Atlas’s cabling ended in a 3.5mm connection, an oddly low-key decision for a flagship release. But with USB comes a whole world of sound tuning on the software side.

And Turtle Beach benefits, in my opinion. The Atlas Aero defaults to Turtle Beach’s “Signature Sound” preset, a treble-heavy profile that emphasizes that this is a gaming headset first and foremost. Gunshots, footsteps, and other “tactical” sounds are pushed to the forefront—and activating the aforementioned Superhuman Hearing mode boosts these frequencies even more. 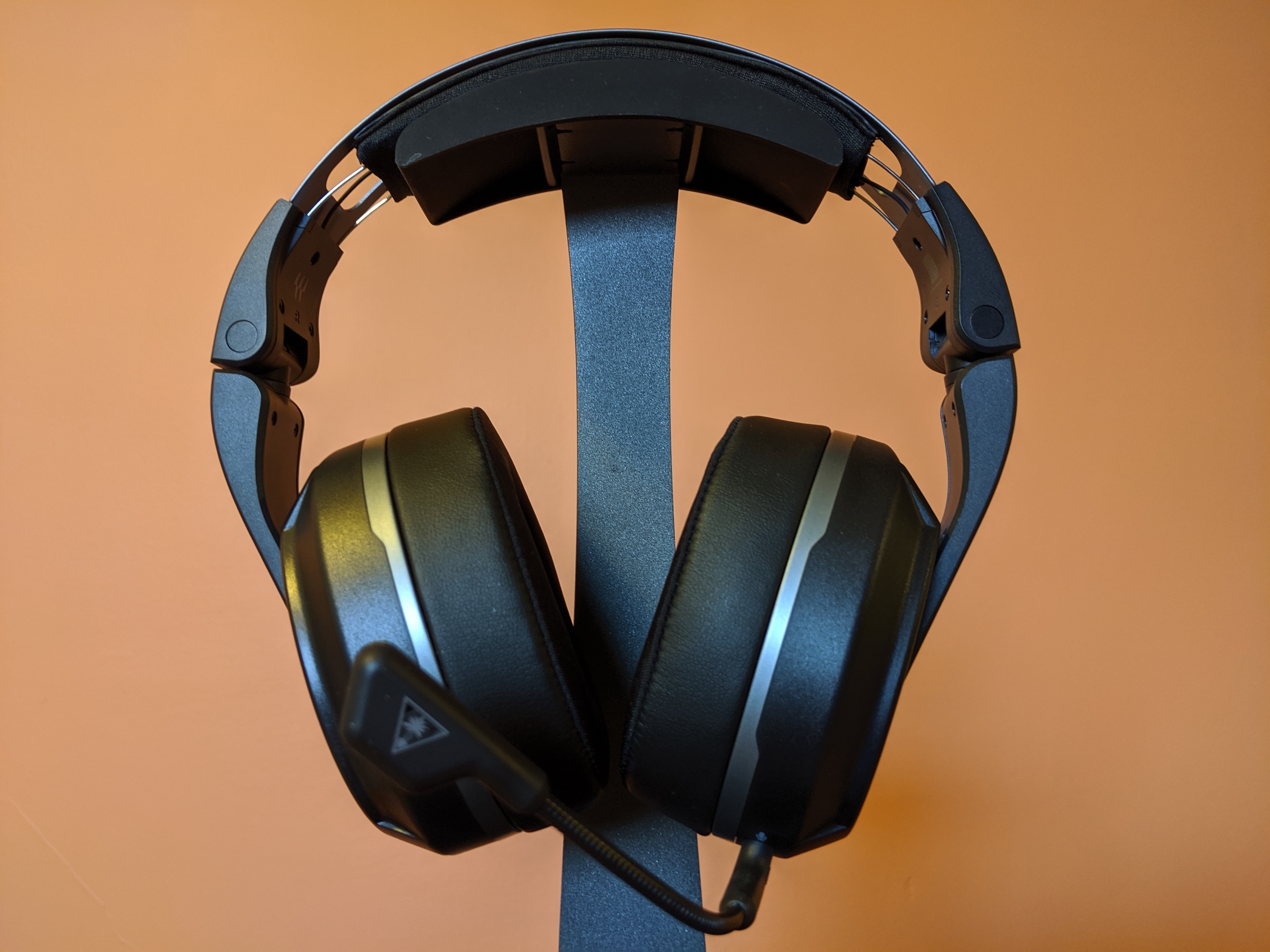 Trouble is, treble-heavy mixes are good for short-burst competitive scenarios and not much else. That tracks with Turtle Beach’s target audience, but the Atlas Aero is still a pretty harsh and exhausting listening experience for day-to-day use, both with and without Superhuman Hearing active.

Luckily the Atlas Aero’s software side comes with a full EQ suite that gives you some less grating options. And the truth is, the Atlas Aero is a decent-sounding headset with that treble focus stripped away. Roll on the bass, scale back the upper range, and the Atlas Aero takes on a much warmer feel. It’s even surprisingly good for music listening after a few minor tweaks.

Per usual, I’ll note that I give more weight to a headset that sounds great right out the box. That said, the Atlas Aero’s flexibility did impress me. Changes, even minor, are immediately noticeable, and there’s a lot of headroom to mold the Atlas Aero to your preference. The stereo width is above-average too, with a spacious soundstage that helps the mix breathe once you have the EQ dialed in. I’d stick to the basics though. Turtle Beach inundates you with fancy-sounding options, but most are just EQ adjustments of some sort, like “Game Treble Boost” and “Game Dialog Level.” The exceptions are the Game Spatializer and 3D Audio, the latter of which is done in partnership with Waves.

Only one can be active at a time. Really though, neither should be active. The Game Spatializer is the more natural of the two, broadening the mix without doing too much damage—but it does change the texture of the sound, giving voices a hollower feel while fattening up the bass. I don’t hate it, but I don’t like it either.

The 3D Audio option is worse. There are three presets—Music, Movies, and Games—but all three give the source that “slick” sound that comes from applying heavy compression. Maybe it’s for people who need a tactical edge at all costs, the same as the Superhuman Hearing functionality. I would never touch it though. 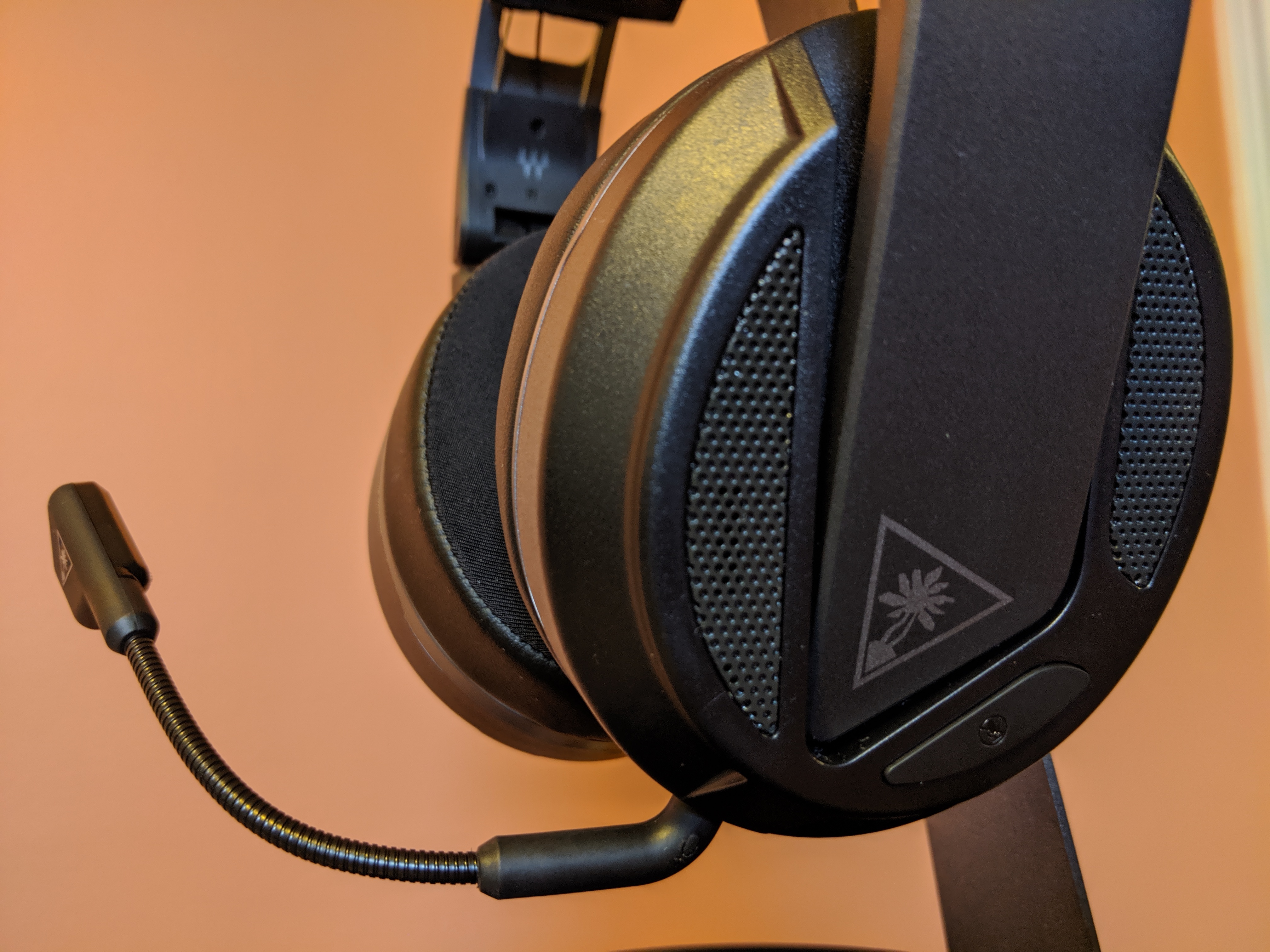 As for the microphone, it appears to be the same slinky boom found on the original Elite Atlas. Voice reproduction was pretty solid even then, but the Atlas Aero’s USB connection allows you to set up a noise gate and filter even more background noise, which is great for noisy environments. No complaints.

The Elite Atlas Aero is a better headset than its predecessor for many reasons. The built-in controls are a huge improvement, as is the option to EQ out the worst of Turtle Beach’s tendencies. That said, it’s also nearly twice as expensive. I’m a fan of wireless myself, but the higher price tag does undercut the Atlas Aero somewhat.

The Elite Atlas had that “Wow, this is amazing for a budget headset” underdog appeal. The Atlas Aero is on a par with what I’d expect in the $150 range, a well-built and fairly powerful device that doesn’t really stand out. In other words, it’s a milestone for Turtle Beach, but only insofar as they’ve caught up to the competition.

Turtle Beach’s wireless take on the Elite Atlas improves on the original, with built-in controls, software-side support, and more. At twice the price though, this upgrade doesn’t have the same breakout appeal.

Don't miss a deal at EE Mobile
Best offers at Surfdome
Discounts, Sales and Deals at Myprotein
Save your money with Groupon
Online-Shopping with Microsoft Store
Best products at Nike DE
Latest Posts