An open source development kit that houses a Raspberry Pi CM3+ Lite inside a keyboard chassis, pretty much like the Raspberry Pi 400, is available for pre-order.

Named the DevTerm, the upcoming device is a more complete all-in-one PC than the Raspberry Pi 400, as it ships with an integrated display and several other accessories.

Developed by Minnesota-based Clockwork Tech LLC, the DIY-friendly DevTerm is built around a Raspberry Pi Compute Module 3+, and in addition to the gamepad-equipped keyboard also includes a 6.8-inch IPS screen, a thermal printer, and a battery holder. 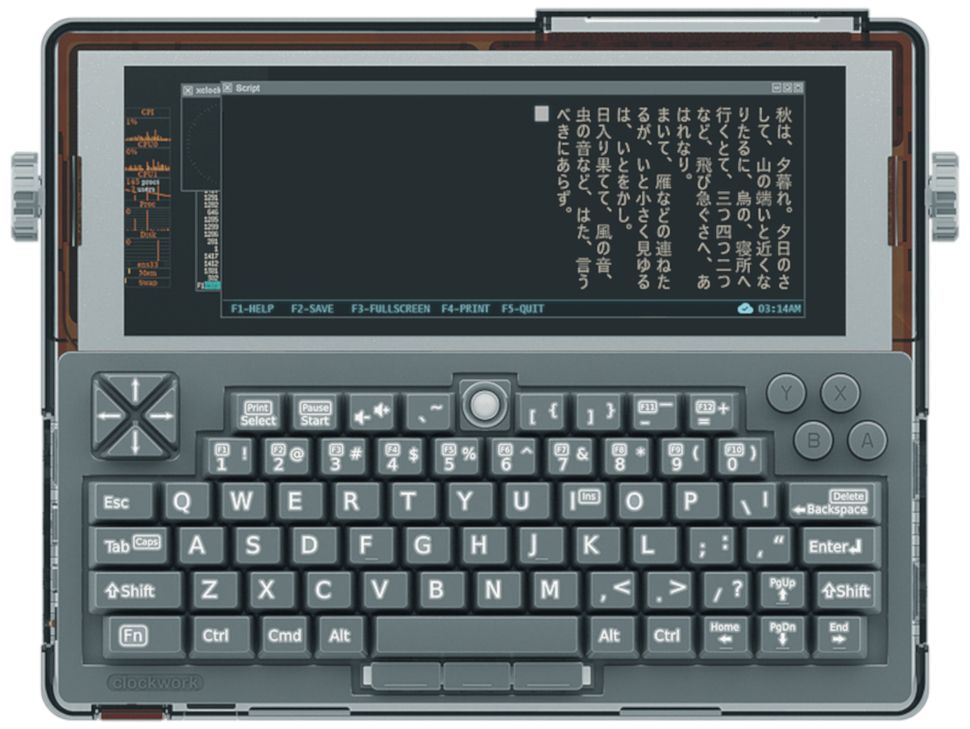 Clockwork is known for its GameShell handheld retro gaming console.

Like the GameShell, the DevTerm runs Linux atop a smart hardware design that’s modular, and open source. As its name suggests, the DevTerm is designed for doing development, though it does include a retro-style gamepad built into the 67-key keyboard, which also has a mini-trackball and three mouse click-buttons.

What really sets it apart though is the ultra-wide, 1280 x 480-pixel IPS screen that you can scroll using knobs on either side.

The initial DevTerm Kit RPI-CM3 model is built around the ClockworkPi v3.14 mainboard that’s equipped with a port to add the CM3+ Lite module.

The device includes a micro-HDMI port, 3.5mm audio I/O jack, a 40-pin GPIO connector, and though it lacks a LAN port it does offer 802.11ac WiFi with Bluetooth 5.0 along with an antenna.

Also note that while the device will take various 18650 battery sizes, the DevTerm doesn’t include the batteries, primarily due to the logistical complexities for shipping lithium batteries.

Clockwork will publish schematics for the device on GitHub under a GPL v3 license. You can pre-order the DevTerm for $219 and up depending on the core module, and the company expects to begin shipping in April 2021.

Don't miss a deal at Sephora
Best offers at Myprotein
Discounts, Sales and Deals at Groupon
Save your money with Sky
Online-Shopping with Bodybuilding
Best products at H&R Block
Latest Posts