If you like thump, you’re bound to like Sony’s Extra Bass series of speakers and headphones. The name tells you exactly what the company is aiming for with the sound, and the SRS-XB32 fulfills the mission nicely—there is indeed, quite a bit of bass response. Whether it’s extra or not is a matter of taste.

And here’s the kicker: The SRS-XB32 is waterproof. Its IP67 rating means it’s not only dust tight, but that it can safely withstand being immersed in up to three feet of water. That’s something I completely forgot while listening to it, due to the overall quality of its audio performance. Trust me, that’s never happened to me before.

The version of the SRS-XB32 I tested was black and measured approximately 9.3 inches wide, 3.3 inches deep and high, and weighs just about two pounds. As I mentioned, it carries an IP67 rating, which means you can take it in the pool if you don’t drag it more than three feet down. Generally, there’s always one friend who’ll dive to the bottom anyway. Don’t invite them. 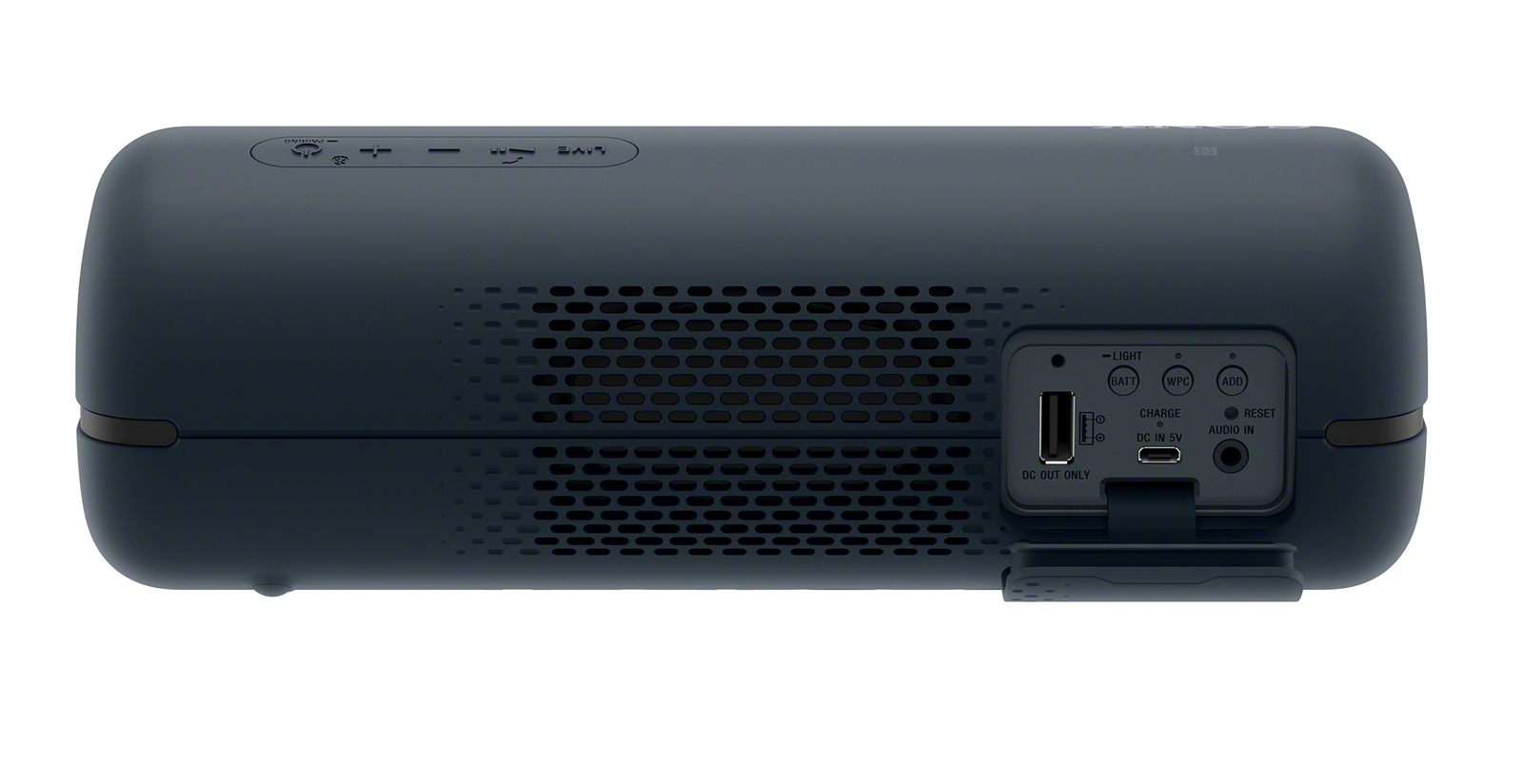 There’s a captive rubber plug on the back of the SRS-XB32, that when removed, reveals a Type A USB port for charging other devices, a micro-USB port for charging the SRS-XB32 itself, and a 3.5mm analog audio input. There’s also a recessed reset button and three buttons for battery-level reporting, enabling WPC (Wireless Party Chain—up to 100 Sony Bluetooth speakers all playing the same thing), and Add respectively. The Save feature will stereo pair the SRS-XB32 with another Sony Bluetooth speaker. The battery level feedback is provided via a pleasant female voice.

The speaker’s main controls are on top, including the Bluetooth pairing button, volume up and down, play/pause, and Live. Pressing that last button invokes psychoacoustic processing that gives audio material more of a sense of space.

My only complaint about the controls, which also handle phone calls, is that there’s no dedicated button for the Extra Bass effect. Instead, to turn it on and off, you press and hold both the play/lower volume buttons for three seconds. You’re likely buying the SRS-XB32 for extra bass and won’t be toggling it on and off, but still.

The XB32 brings the bling in the form a ring of colored LEDs lining the sides and front of the unit, as well as two flashing lights behind the grill. In fact, the company lists “Flashy lights” as one of the speaker’s features. Marketing folks with a sense of humor. Who knew? You can configure the lighting using the Sony Fiestable app as well as control them in real time with the app.

Sony also provides a Party Booster mode, invoked by pressing and holding the up/down volume buttons for three seconds. Tapping the unit makes a percussion sound, but it takes a forceful rap to get a sound out of it. It’s even velocity sensitive; i.e., the harder you hit it, the louder the sound. It’s kind of fun, but it’s probably also why Sony talks in the reviewer’s guide about the unit being shockproof.

The run time for the 2700mAh battery is about a full day unless you employ the Live mode and Extra Bass. It drops to about 16 hours with those enabled. That’s still enough for all but the most die-hard party-goers.

Sitting in front of me as I type this review, listening to Toto’s “Africa” at a modest level, I find it hard to imagine a more pleasant-sounding portable speaker. Loud and from a distance, I wasn’t as quite as enamored, as the low mid-range didn’t quite hold up, but the bottom line is—this is the best darn waterproof speaker of its size that I’ve ever heard.

The XB32’s “Live” button is roughly the equivalent of a surround effect, and it worked far better than I anticipated—not at all artificial. It adds some much-needed separation to audio material, which every single-box stereo setup needs. Props to Sony for the implementation.

Of the three Extra Bass products I’ve heard—which includes the larger SRS-XB41 speaker and the MDR-XB950 headphones—the SRS-XB32 comes the closest to my ideal—with thump that’s apparent, but overwhelming. That’s less than many might like, so bear that in mind.

Tastes vary, and mid-range aficionados might prefer a JBL, but I’m sticking with this Sony. It’s no mean feat getting sound of this quality out of a waterproof speaker.

There’s not a lot more to add to about the SRS-XB32. I have yet to hear another price- and size-comparable speaker that matches it for audio quality at reasonable volumes and it has all the fun features the party requires. Good stuff from Sony.

For a waterproof (to 3-feet immersion) speaker, Sony’s SRS-XB32 sounds great. In fact it doesn’t sound like an IP67 speaker, which is a high compliment. It’s also fun to watch.

Don't miss a deal at EE Mobile
Best offers at Sky
Discounts, Sales and Deals at Adobe
Save your money with Vodafone UK
Online-Shopping with Turbo Tax
Best products at Udemy
Latest Posts