Lifestyle audio maker SOL Republic has released a new headphone model as part of its Sountrack series. The $200 Soundtrack Pro ANC is an over-the-ear wireless headphone with active noise-cancelling technology and Bluetooth 5.0 on board.

The Soundtrack Pro ANC (a similar model without ANC is also available at Amazon for $170) comes in three colors: black, gray, and champagne. The acoustically transparent colored fabric covering the drivers changes depending on which headphone color you choose. My review pair happened to be black.

Like its recent competition, the Soundtrack Pro ANC delivers enough battery to last more than a full day. Its 500mAh battery is rated to deliver 32 hours of wireless playback. Thanks to rapid charging technology, you’ll get a full charge in about 3.5 hours. 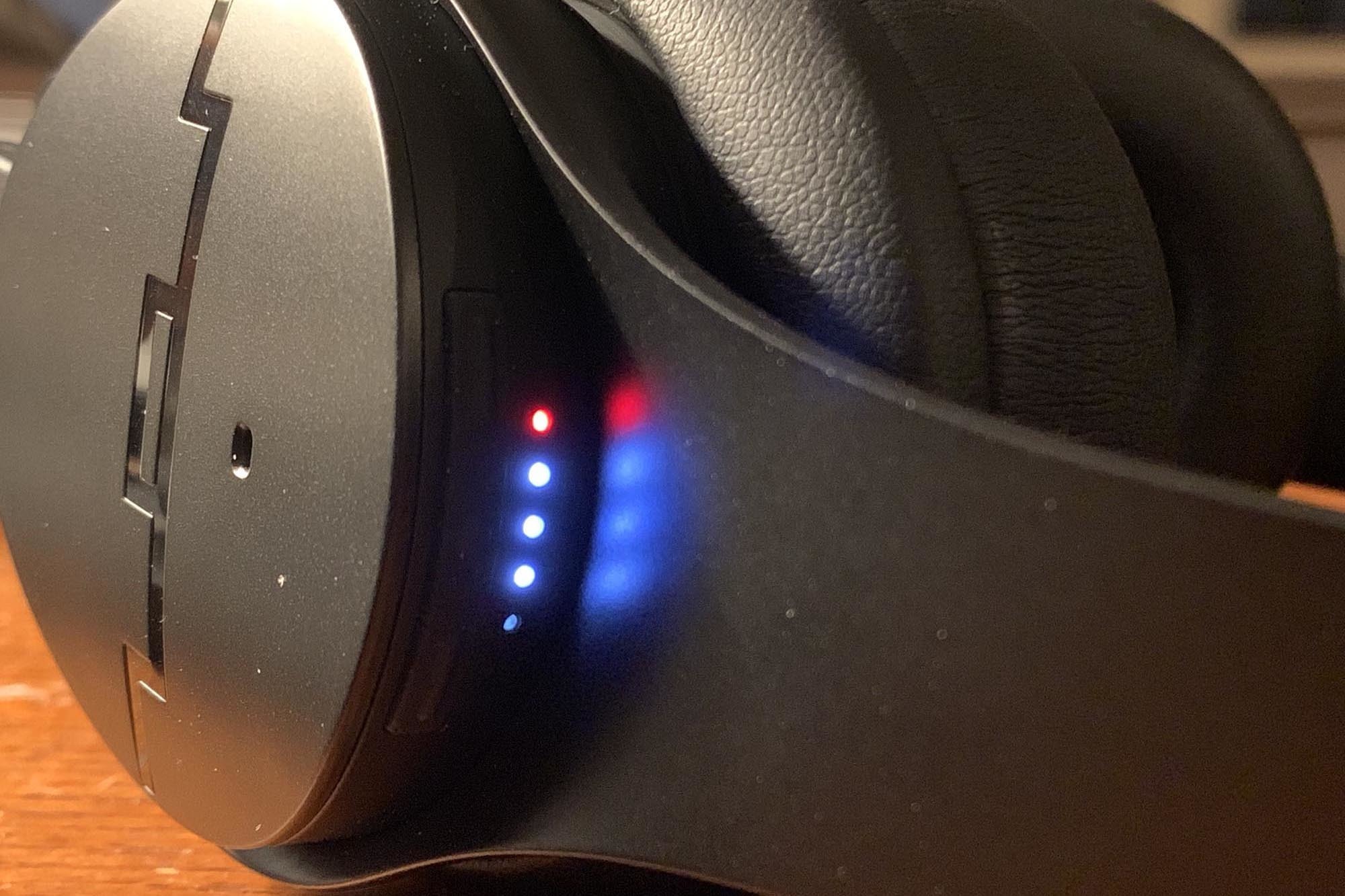 The headphones fold for easy travel, but SOL Republic should have included a carrying case—a pouch, at least—for the price point. Most buyers considering noise-cancelling headphones, after all, are likely planning to take them on the road. Speaking of which, there’s no airline adapter or 1/4-inch adapter included, either.

Traditional three-button controls are located on the top of the right ear cup. The pause/play button has a distinctive protrusion, and the buttons are fairly easy to distinguish by touch. I wasn’t always confident, however, I had my finger on the correct button and needed to move my finger from front to back to get oriented. Manufacturers should make all control buttons tactile-friendly. I prefer the more overt button distinctions you’ll find on V-Moda, AKG, and Bowers & Wilkins headphones.

Plastic is the dominant material in the Soundtrack Pro ANC’s construction, with a click-adjustable metal headband as the sole exception. I didn’t like the headband, finding it more difficult than average to adjust. In fact, I found everything about this headphone’s design to be stiff or tight. If you prefer tight-fitting headphones, you’ll love the Soundtrack Pro ANC. 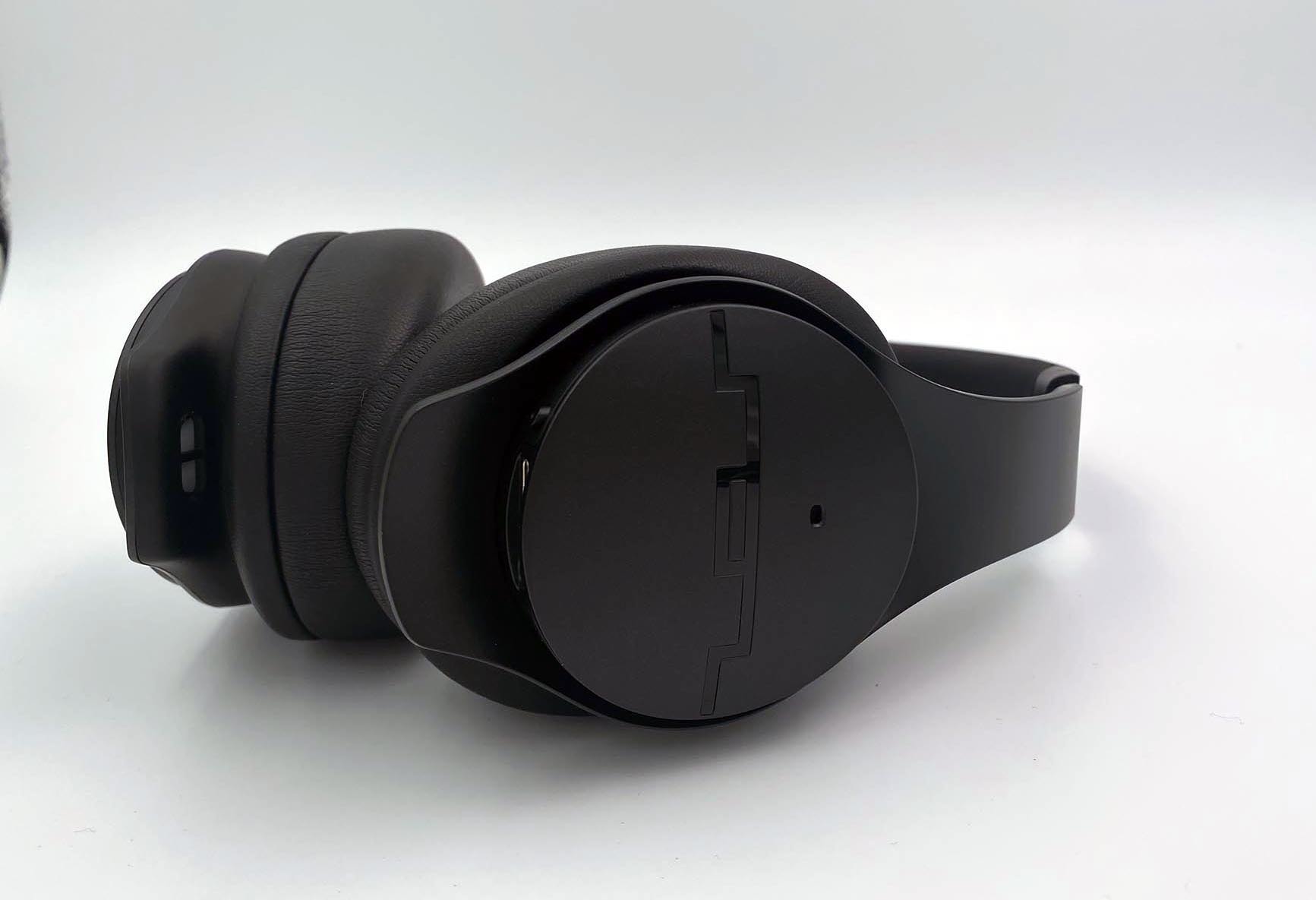 Take the ear cups, for example: Despite being soft yet able to keep their shape to create a stable listening cavity around my ears, they never felt comfortable. B&W’s slightly more-expensive PX headphones create a similar stability with their earcups, but they’re much more pliable.

Consequently, the SOL Republic Sountrack Pro headphones don’t rank among my list of top performers for long listening sessions. The headphones became mildly uncomfortable and I felt relieved when I took them off. The headphones certainly exhibited a higher than average clamping pressure on my head. While that gives you a sense of security that they won’t fall off, the tradeoff is comfort.

I compared the SOL Repubic Soundtrack Pro with the Bowers & Wilkins PX wireless headphones and the Bose Quiet Comfort 35. Those headphones also have a solid clamp, but their headbands are far more flexible and forgiving, and each has much softer ear pads. With any luck, SOL Republic’s cans will loosen up after an extended break-in period, but I can’t say that for certain. 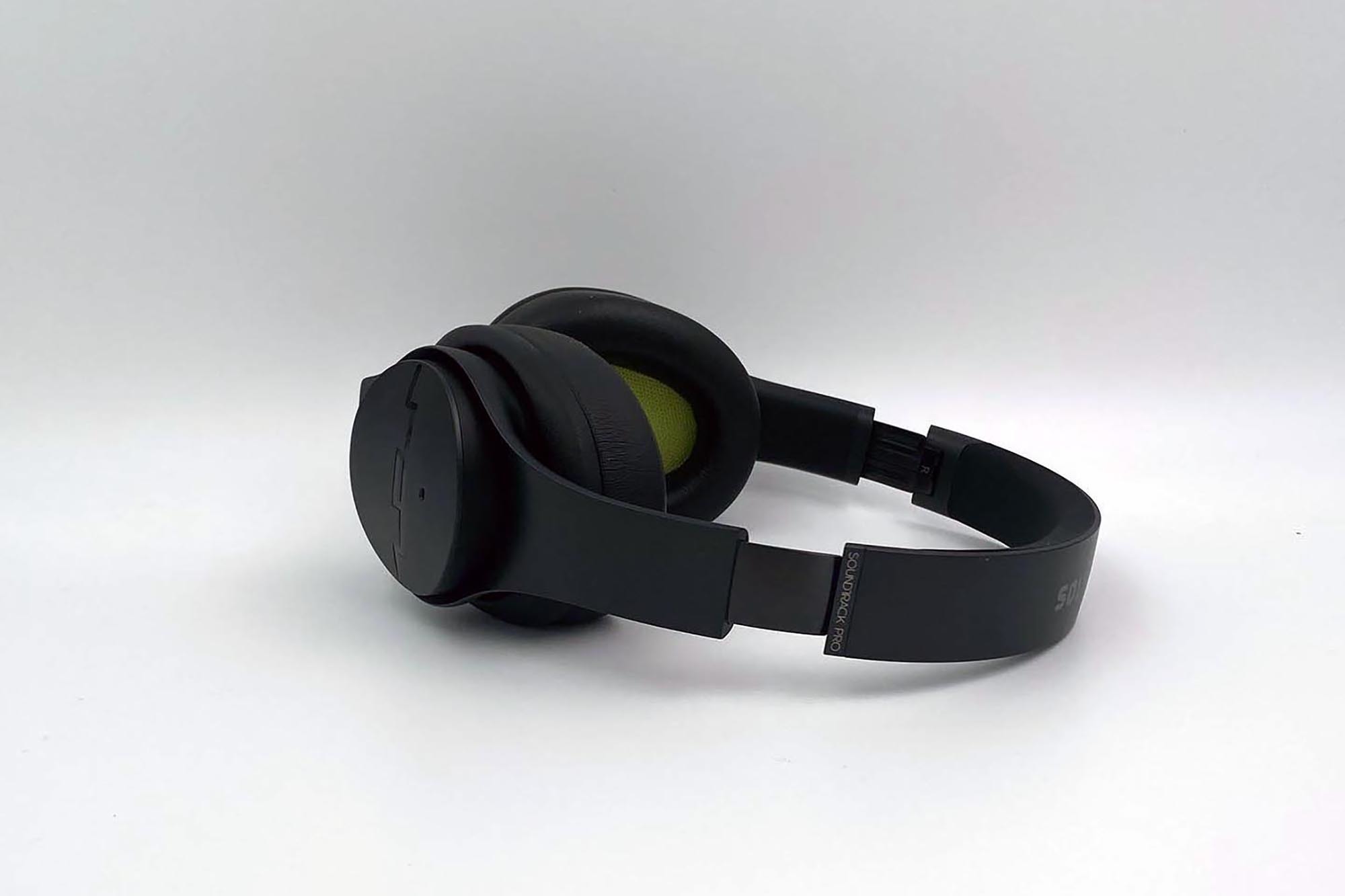 The SOL Republic Sountrack Pro ANC, like other noise-cancelling headphones, work their magic by using microphones mounted outside its earcups to capture the waveform of ambient noise. The headphone then produces an inverse waveform at the same frequency and amplitude and pipes this sound into its ear cups, mixed with the music, to mask the noise.

Alas, with stay-at-home orders and New York City becoming the epicenter of the COVID-19 outbreak, I didn’t have the usual opportunities to put the SOL Republic’s ANC performance to real-world test in noisy mass transit systems or on an airplane. I had to improvise.

For example, I have an air purifier that, when set to “high,” measures 84dB on my sound pressure level meter. I’ve measured airplane cabins, by contrast, that can get as loud as 94dB, which is in the range of permanent hearing loss after prolonged exposure. 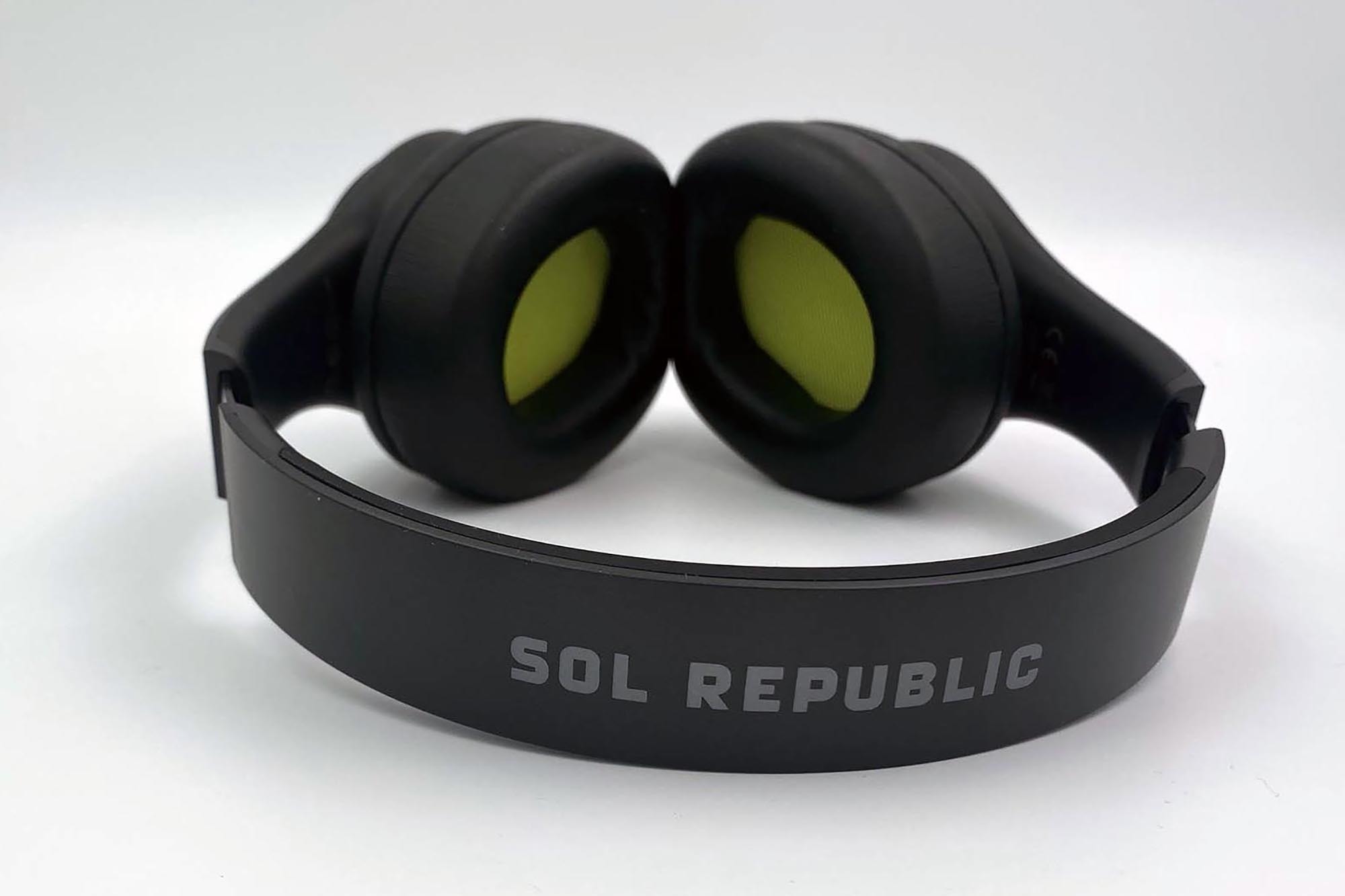 The Soundtrack Pro ANC did a decent job of taking the edge off the air purifier’s fan noise—with the best performance concentrated primarily in the midband—but it couldn’t quite compete with the Bose QC35. Bose and Sony reign supreme when it comes to active noise reduction.

SOL Republic’s ANC headphones also feature an ambient-aware mode that lets you hear the outside world around you without needing to take your headphones off. To enable this mode, simply press the power button twice and you’ll find yourself in monitor mode. The Soundtrack Pro ANC did a good job apart from one glaring drawback: The headphones in monitor mode generated so much hiss I thought I was near a waterfall. But to be fair, even some really big headphone brands have gotten this feature terribly wrong.

I tested SOL Republic’s Soundtrack Pro ANC headphones with an iPhone XS and an Astell&Kern SA700 hi-res DAP. Source material came from the Tidal music-streaming service and various high-res audio files. I played the headphones primarily over Bluetooth, which is what I think the tartget audience will do. On the topic of Bluetooth, I’m disappointed to report that these headphones don’t support either the aptX (near CD-quality) or aptX HD (better-than-CD-quality) codecs, which would have resulted in higher-fidelity audio.

The Sountrack Pro ANC will do double duty as a hands-free headset for your calls, and they delivered excellent results in my limited testing environments. Callers could hear me clearly and I, in turn, could hear them. You’ll get about 30 feet or so of wireless range, just be aware that walls or other obstacles will reduce the distance you can roam from your phone.

Sonically, the Sountrack Pro ANC delivered punchy performances in both wired and wireless modes, with good midbass response. When played wirelessly, however, the overall sound was decidedly veiled. That’s not necessarily unusual at this price-point, but it was noticeable. On Sarah McLachlan’s Afterglow Live, for example, the Sountrack Pro ANC failed to convey the sense of depth and breadth on tracks such as “World on Fire.” Turning ANC on and off didn’t make a big difference in that sensation. The top end was likewise reserved and rolled in wireless mode. These headphones are not what I’d describe as sonic overachievers. 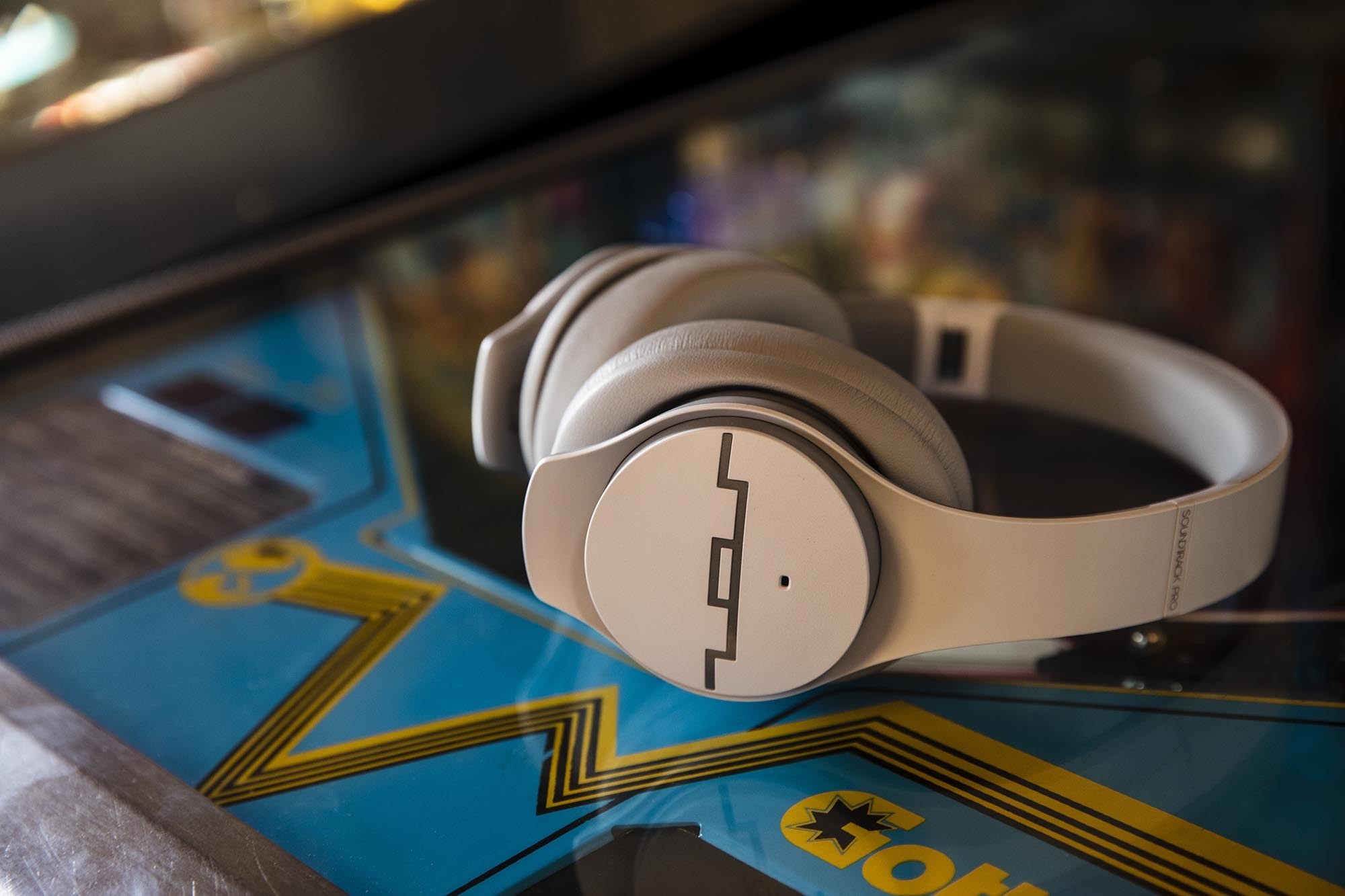 The Soundtrack Pro ANC’s wired performance—played through an Astell&Kern SA700 portable digital audio player—was significantly better, with that veil mostly lifted. The midrange cleared up significantly and the top end was better, too. Playing the 24-bit/48kHz version of Michael Jackson’s Bad, and the 24-bit/96kHz version of Norah Jones’ Come Away with Me showcased the drastic difference between the headphone’s wired and wireless performance. 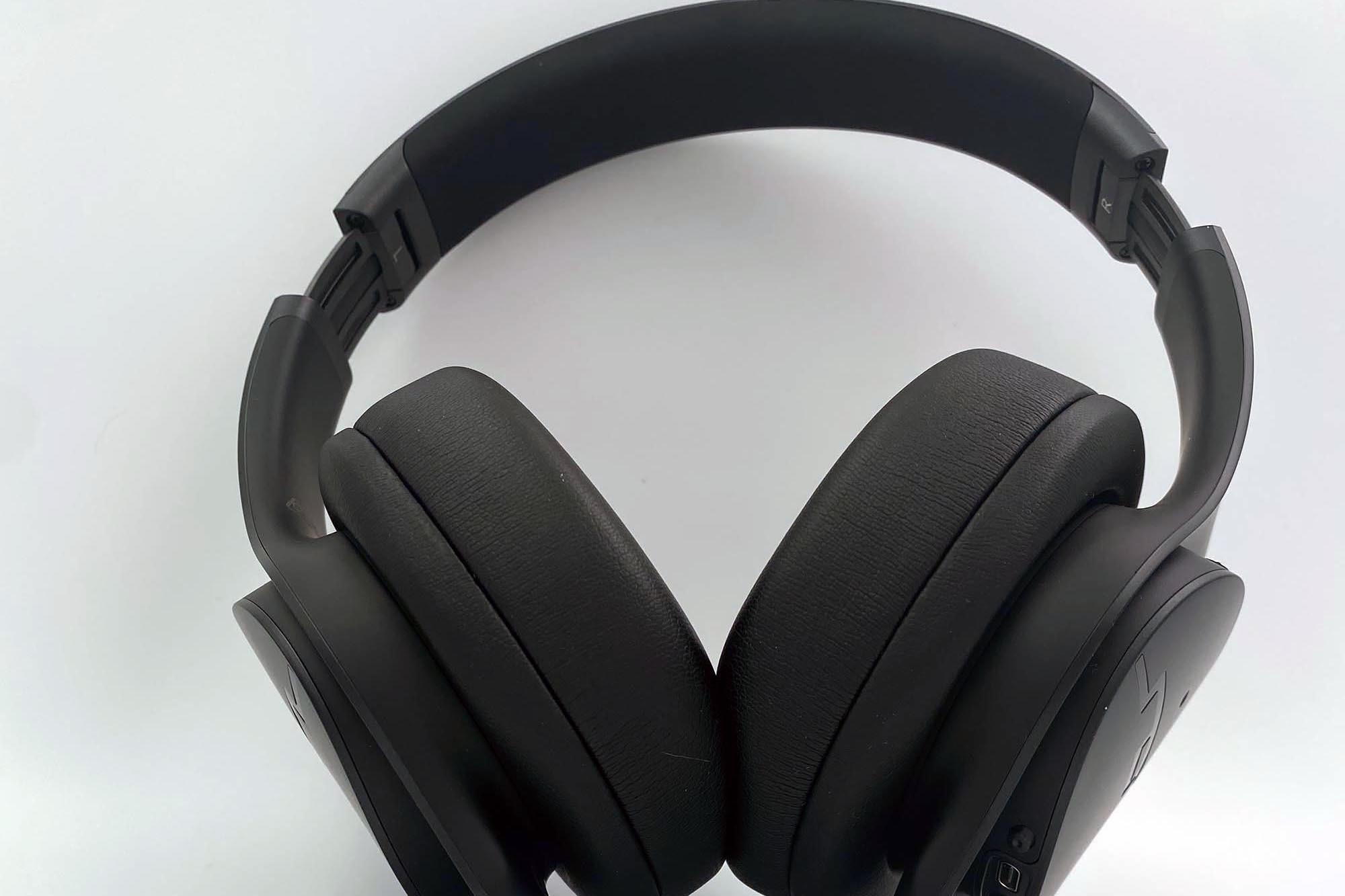 The SOL Republic Soundtrack Pro ANC wireless headphones are an average set of cans for the asking price. I didn’t find them to be an exciting value, but despite their stiff, tight fit, they’re not so sonically deficient that I’d say they’re not worthy of a $200 bill.

If you like their design, battery life. and feature set, and they check all the other boxes you’re looking for in headphones at this price range, I’d say order a pair and audition them for yourself.

$200 is a fair price for these noise-cancelling headphones, just don’t expect them to knock your socks off.

Don't miss a deal at Bodybuilding
Best offers at Sky
Discounts, Sales and Deals at John Lewis
Save your money with Myprotein
Online-Shopping with Go Daddy
Best products at Boohoo
Latest Posts