Seagate’s FireCuda 520 is fast, though only on a par with other premium M.2 NVMe SSDs we’ve tested using commonplace third-generation PCIe. However, if you’re running a late-model AMD system, the 520’s PCIe 4 support will garner you a cool 20-percent jump in sustained transfer rates. We like that.

The FireCuda 520 series uses a Phison 16 controller (the only such beast we’re aware of at the moment) managing 96-layer TLC (Triple-Level Cell/3-bit) NAND. There’s one gigabyte of DRAM cache per terabyte of storage, and up to a third of the drive can be employed as secondary cache by writing only one bit (SLC mode), instead of three (TLC) per cell.

The FireCuda 520 is available in three capacities: 500GB for $125 on Amazon, 1TB (the capacity we tested) for $250 on Amazon, and 2TB for $430 on Amazon. That’s roughly 25 cents per GB, and on a par with the Samsung 970 Pro and other top-tier drives. But you may have noticed that there are M.2 PCIe NVMe drives available for less than 10 cents per gigabyte, so this isn’t a bargain hunter’s drive. There is value in the premium, though.

The drives carry a five-year warranty and are rated for an extremely generous 1,800 TBW (TeraBytes Written—how much data can be written over the life of the drive) for every 1TB of capacity—part of what the extra cash buys you.

To be fair, there isn’t a lot in the way of PCIe 4 hardware out there at the moment (all late-gen AMD), so we haven’t really been able to kick the fourth-tires thoroughly. However, there was a noticeable gain in sustained throughput with PCIe 4 during our testing, as you’ll see in the performance section below. 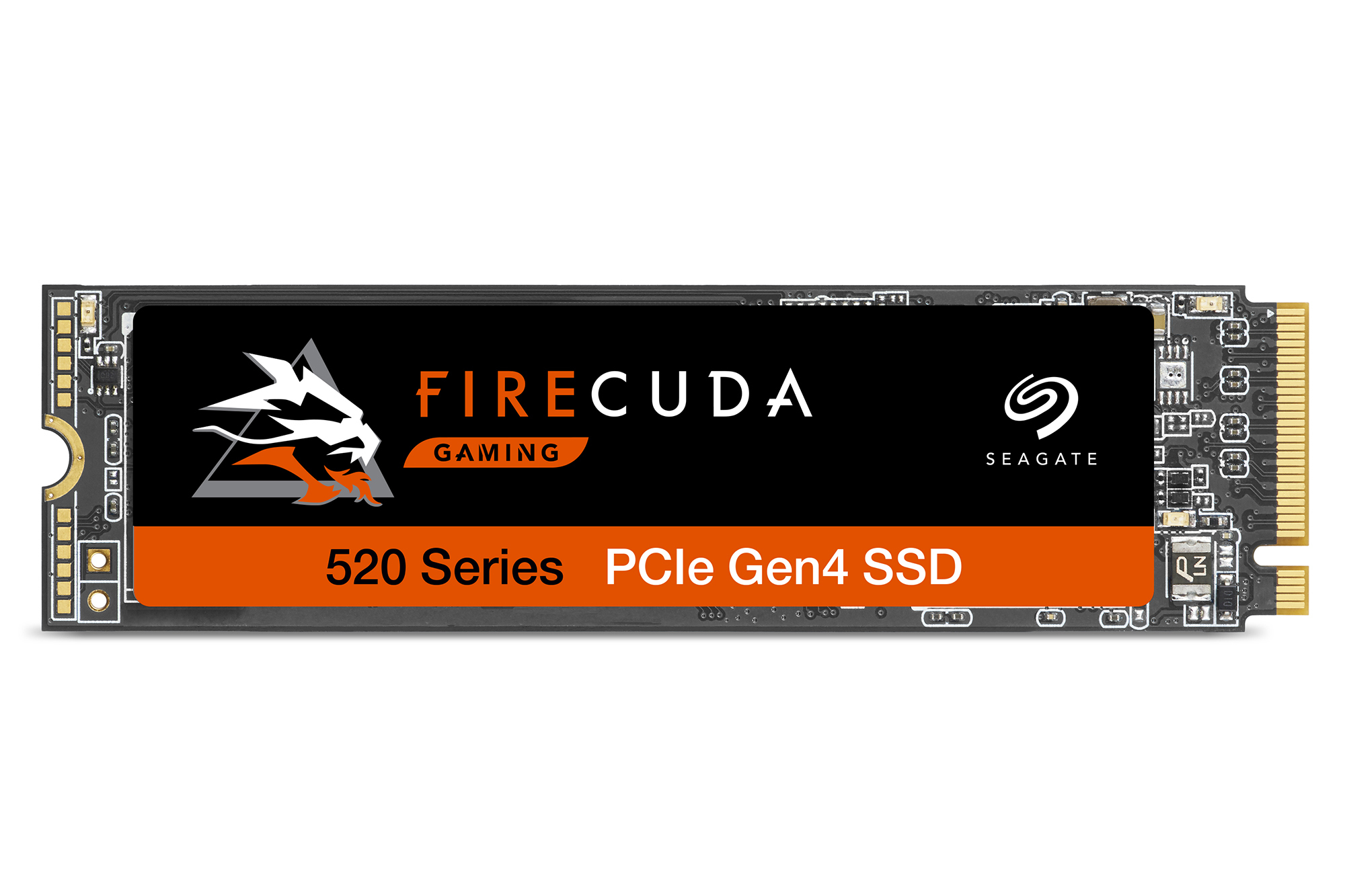 Fast sustained throughput is nice, but much of NVMe’s real and perceived speed comes from its super-fast seek times (the time it takes to locate data before transferring it). There’s seemingly no benefit to be derived from PCIe 4 on that front.

For more on real world versus benchmarks, take a look at our HighPoint RocketStor 6661a NVMe RAID controller review. We’d love to retest that on PCIe 4.

The PCIe 4 testing was done on an AMD Ryzen 7 3700X 8-core mounted on a MSI MEG X570 motherboard with the same software and components, minus the add-in cards.

PCIe 4 will save you time during large file transfers, and it’s also a hoot to see the synthetic benchmark numbers: 4.5GBps reading and 3.8GBps writing with CrystalDiskMark. But at the moment, the vast majority of users as well as our official tests use PCIe 3, so we’ll use the third-generation numbers for the peer-to-peer comparison. If indeed, it can be said that a PCIe 3 SSD is the peer of a PCIe 4 drive.

The CrystalDiskMark 6 test makes it clear that PCIe 4 is capable of delivering much greater raw throughput. In the real world, the differences are still noticeable, though not as great. 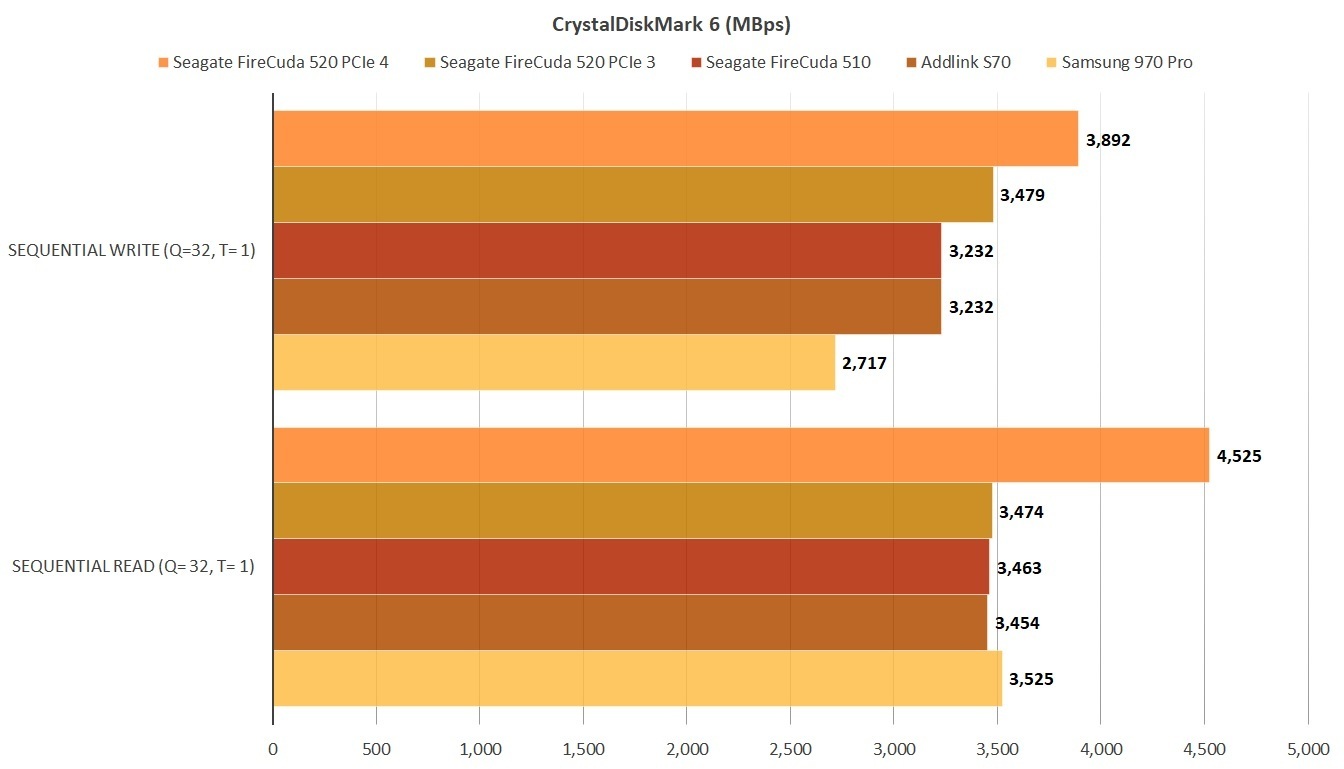 Backing up that last statement are the results of our read-world copy tests shown below. While its overall score wasn’t the best, thanks largely to a deficit writing smaller files, the 520 blew away the other drives with the large 48GB single file. 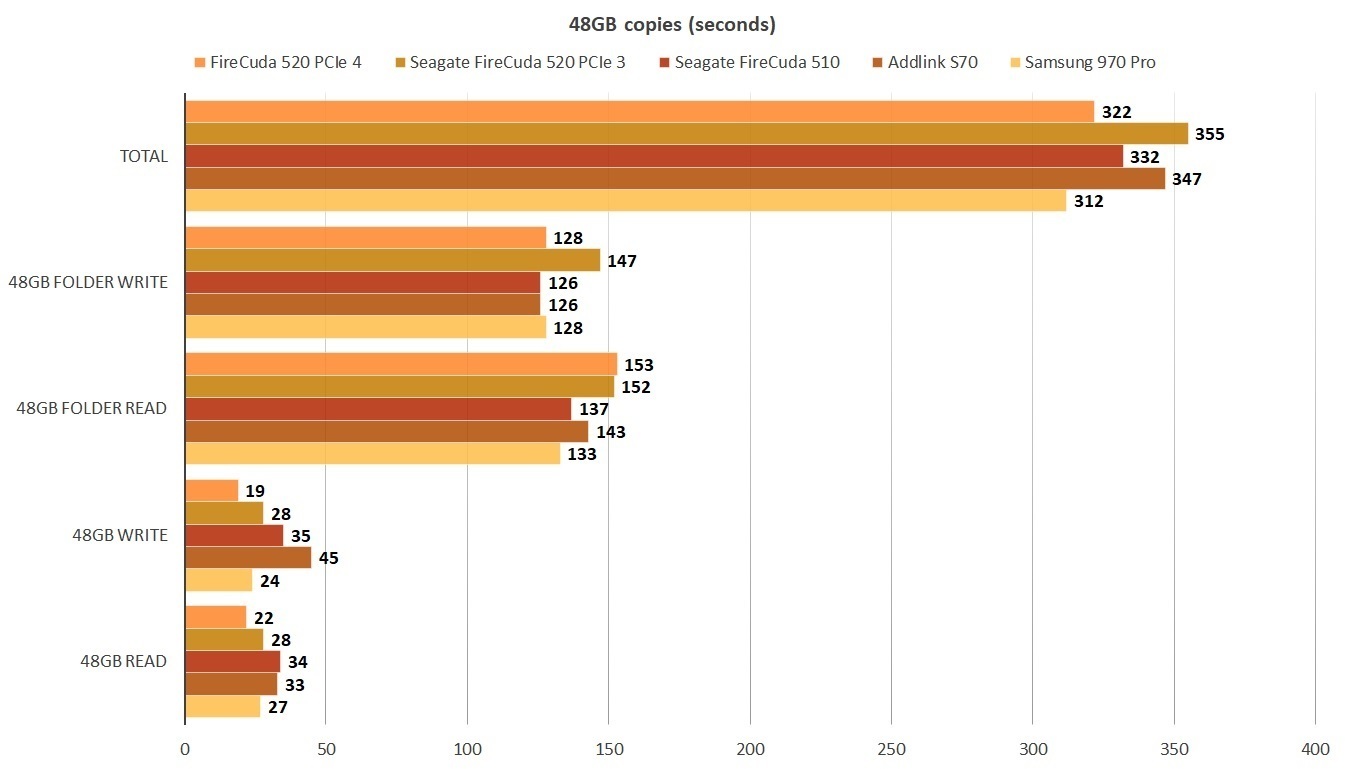 What actually impressed us the most about the FireCuda 520 was that it maintained an almost 1.7GBps pace through our full 450GB copy test over PCIe 3, copying the file in 4 minutes, 10 seconds. We don’t have a chart for that yet, but some bargain NVMe SSDs can take up to 15 minutes. Not that you’ll be copying 450GB very often.

The FireCuda 520 is a great drive, nearly as fast as any we’ve seen in the PCIe 3 benchmarks, and has the added benefit of supporting PCIe 4, which offers a noticeable jump in sustained throughput. If you’re shopping for or own a newer AMD system, it’s the choice in premium M.2 NVMe SSDs.

If on the other hand, you’re one of the vast majority stuck back on plain ‘ole PCIe 3 (sigh), the FireCuda 520 is still worth considering as a premium drive. However, the price to performance delta in the M.2 NVMe market has shifted significantly recently due to such drives as the Addlink S70, which offers the same subjective everyday performance for half the price.

99 percent of the experience for 50 percent off is the way to go for the average user, but I will say this: Our AMD testbed with two FireCuda 520s was one responsive beast, and I could easily get addicted to 2.1GBps transfers. I’m easy that way.

Don't miss a deal at Sephora
Best offers at TalkTalk Phone and Broadband
Discounts, Sales and Deals at Argos
Save your money with Vodafone UK
Online-Shopping with John Lewis
Best products at Marks and Spencer
Latest Posts