Schlage’s Encode smart deadbolt is a robust smart lock that connects to your Wi-Fi network and is compatible with Key by Amazon. That’s the service that allows Amazon delivery people to place packages inside your door, instead of leaving them on the porch. It works with Key by Amazon-compatible security cameras that allow you to watch and record such deliveries. You can also pair the lock with a Ring Video Doorbell, so you can see who’s at your front door and open it remotely if you choose.

Those are some great features, but I quickly discovered that the Schlage Encode exposes an important weakness in Amazon’s approach to the smart home. I recently re-installed a Ring Alarm system so that I could evaluate one of the first products in Ring’s smart lighting series, the Ring Pathlight. Since the Encode works with Ring Video Doorbells and cameras, I assumed it would also work with the Ring Alarm. It doesn’t.

The Schlage Encode, as I’ve already mentioned, joins your Wi-Fi network directly, so there is no bridge required. But Ring Alarm will only work with Z-Wave deadbolts, such as Schlage’s own Schlage Connect. If you only have a Ring Video Doorbell or camera installed, a small lock icon will appear at the bottom right-hand side of the doorbell or camera video window. You can click on that icon to lock and unlock the Encode deadbolt while watching a live video stream. 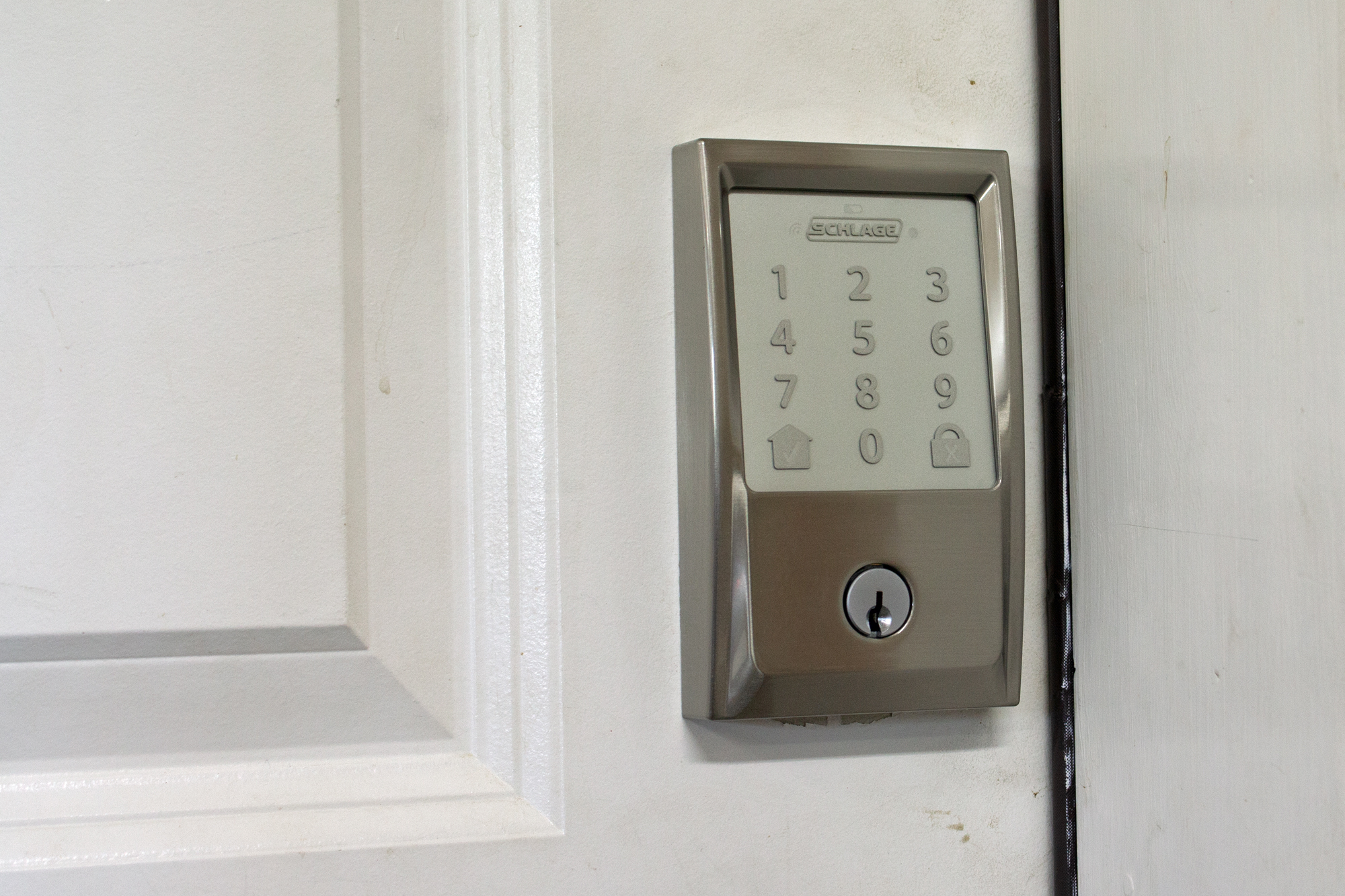 The Schlage Encode is relatively easy to install physically, but configuring it to work with other smart home devices is utterly confusing. I had to reach out to Schlage’s PR team for help on several occasions.

The Encode’s interior escutcheon is considerably smaller than the one that comes with the Connect, which makes it easier to juggle the interior and exterior elements of the lock while you’re installing it, but you’ll still need to thread a too-short power cable from the keypad side of the lock, through the hole in your door, and plug it into the lock’s power supply. Schlage provides the first set of four AA batteries needed to operate the lock, and it comes with one (and just one) mechanical key should the batteries die. 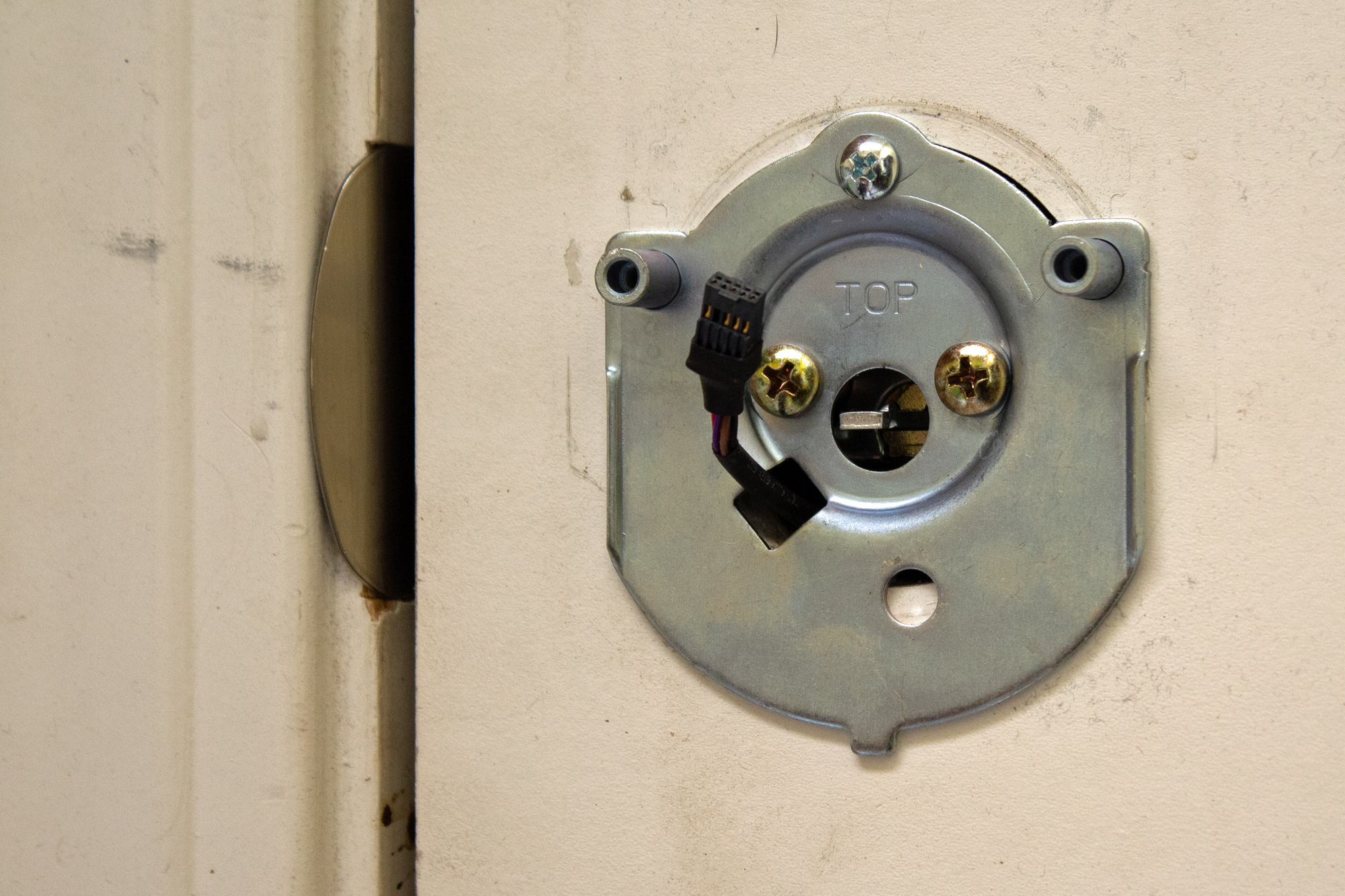 Using the Key by Amazon app

Configuring the lock for ongoing use is a hassle because you’ll need to go through at least two setup processes. To use it with Key by Amazon, Alexa, or a Ring Video Doorbell (or other Ring camera), you’ll install the Key by Amazon software first, and then install the Schlage Home app to access the rest of the lock’s features (and you will want to access those). You’ll also need to install the Schlage Home app if you want to use the lock with Google Assistant (you can configure it to work with Key by Amazon, Alexa, Google Assistant, and Schlage Home if you choose). I’ll throw in here that the Encode is not Apple HomeKit compatible. 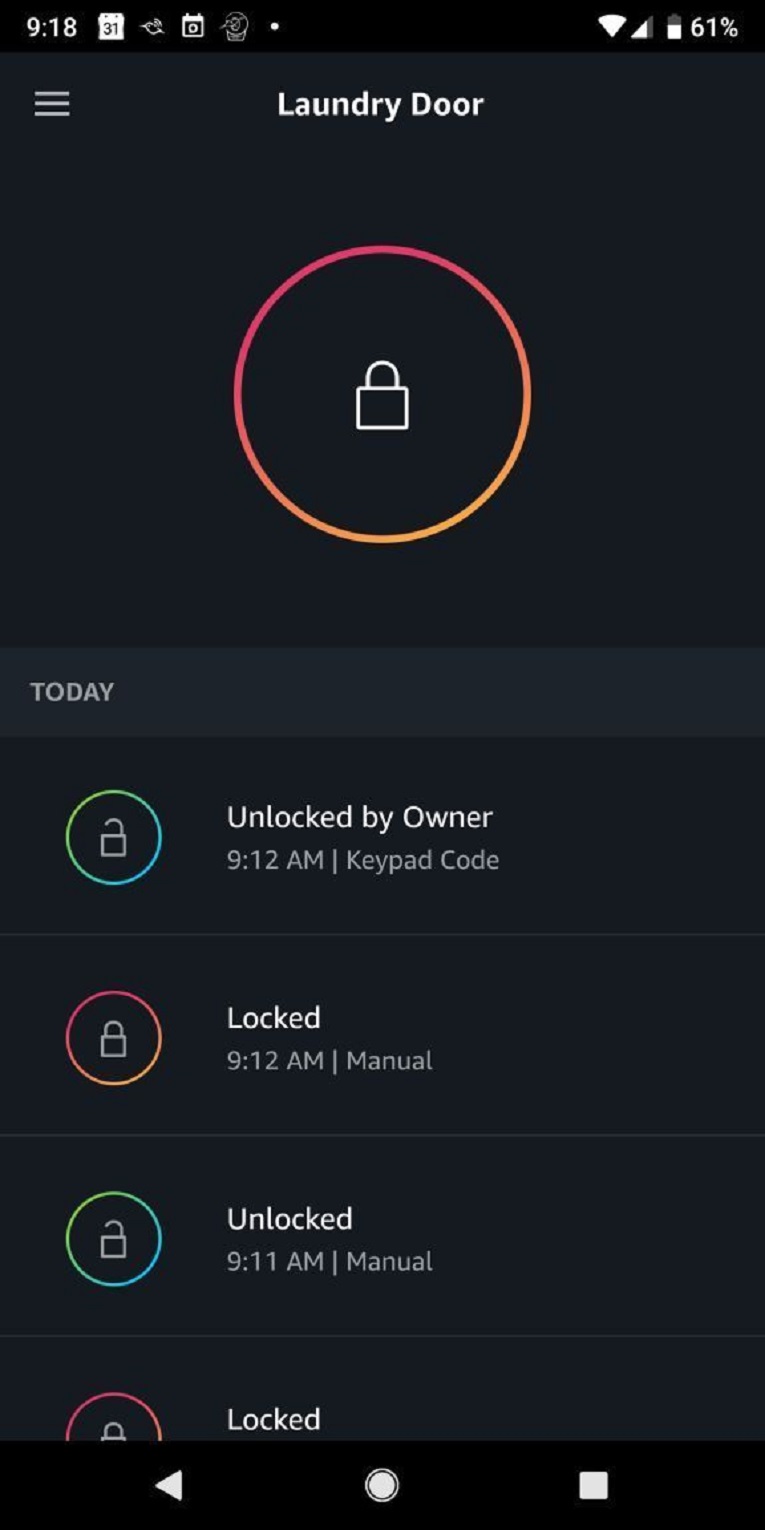 The lock comes from the factory with one six-digit master code and two four-digit user codes, and these are printed on a label that’s exposed when you remove the battery cover. Once you’ve created a new master code with either the Key by Amazon or Schlage Home app, these codes are deleted (they can only be restored by factory-resetting the lock).

When you configure the lock with Key by Amazon on your smartphone, Amazon’s app accesses your contact database during setup to ask for the address where the lock will be installed, listing the addresses that qualify for in-home delivery first.

The Key by Amazon app lets you create a single master code that extends admin privileges within the app. The number of digits you use to create this master code will be the number of digits that will be required to grant future users the ability to unlock the lock. If your master code consists of six digits, for example, all guest codes must also be six digits long (the lock supports up to 100 codes).

Anyone else you create a PIN for in Amazon’s app will be considered a guest, even if they’re a family member. The app will automatically generate a PIN of the required length for each guest, which you can use as is, edit, or delete and in favor of creating your own. Guests don’t have any privileges within the app, but these codes can be deleted where the master PIN cannot. You can add guests from your smartphone’s contact database or do so manually (if you’re granting your child access, for example, who isn’t listed in your contacts because they don’t have a phone). 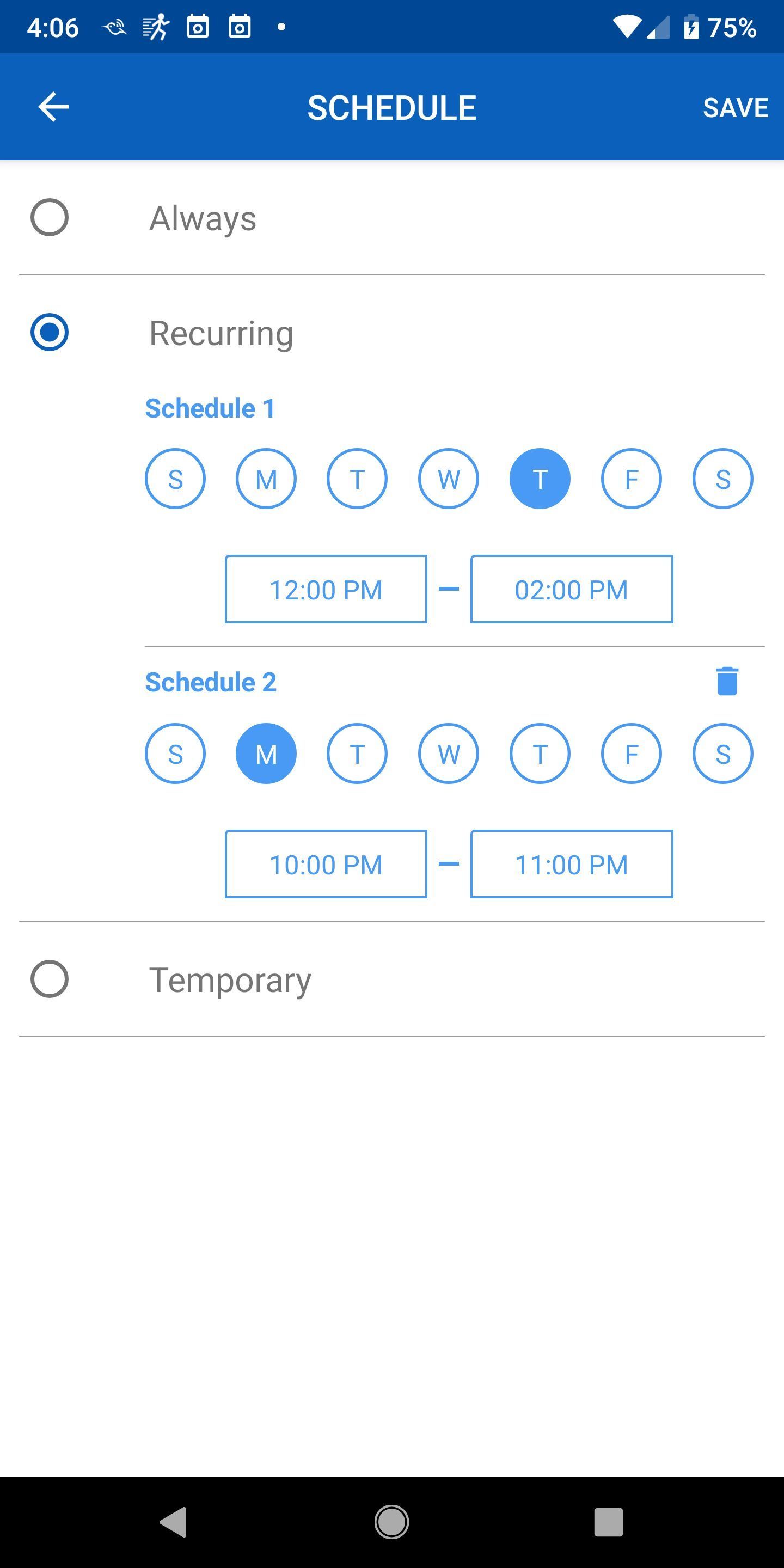 Each guest account can be assigned an access schedule. Your choices here are “always” (as in 24/7), “recurring” (up to two schedules are supported: Every Monday between 3:00 p.m. and 4:30 p.m., for example, and every Thursday between 10:00 a.m. and 11:00 a.m.), or “temporary” (one-time access that you might give a plumber coming to do a repair). If you do provide a phone number, the Key by Amazon app will give you the convenient option of sending that person a text message with their PIN, but not their specific access schedule (Amazon suggests sending that information in a separate message).

I couldn’t test all the features of the Key by Amazon app, because as I mentioned earlier, I don’t live in an area where that service is available. But when it comes to controlling the Schlage Encode, it’s a relatively bare-bones experience. The app links to your Schlage Home account, for cloud-to-cloud communication, and it presents a large lock icon at the top of its main screen that you can tap to remotely lock and unlock the Encode.

Presented beneath that is an event log detailing the lock’s activity. A log entry is generated each time the lock is locked or unlocked. These entries, sorted in reverse chronological order, report the time of the action; the nature of the action (locked or unlocked); if the lock was locked or unlocked via the app; and if a PIN was used to unlock, the name of the person that PIN was assigned to. The log will also inform you if the lock was locked manually (with the inside lever or at the exterior-side keypad) or automatically (if you’ve programmed it to automatically lock after an elapsed time).

It’s a bit of a pain to have to install and operate two different apps to manage the same lock, but the Schlage Home app exposes many more of the Sense’s features than the Key by Amazon app does. And as I mentioned earlier, you’ll need to install Schlage’s app anyway if you want to use the lock with Google Assistant (it’s not absolutely necessary if you’re using just Key by Amazon or Alexa, but you’ll want access to all the lock’s features). 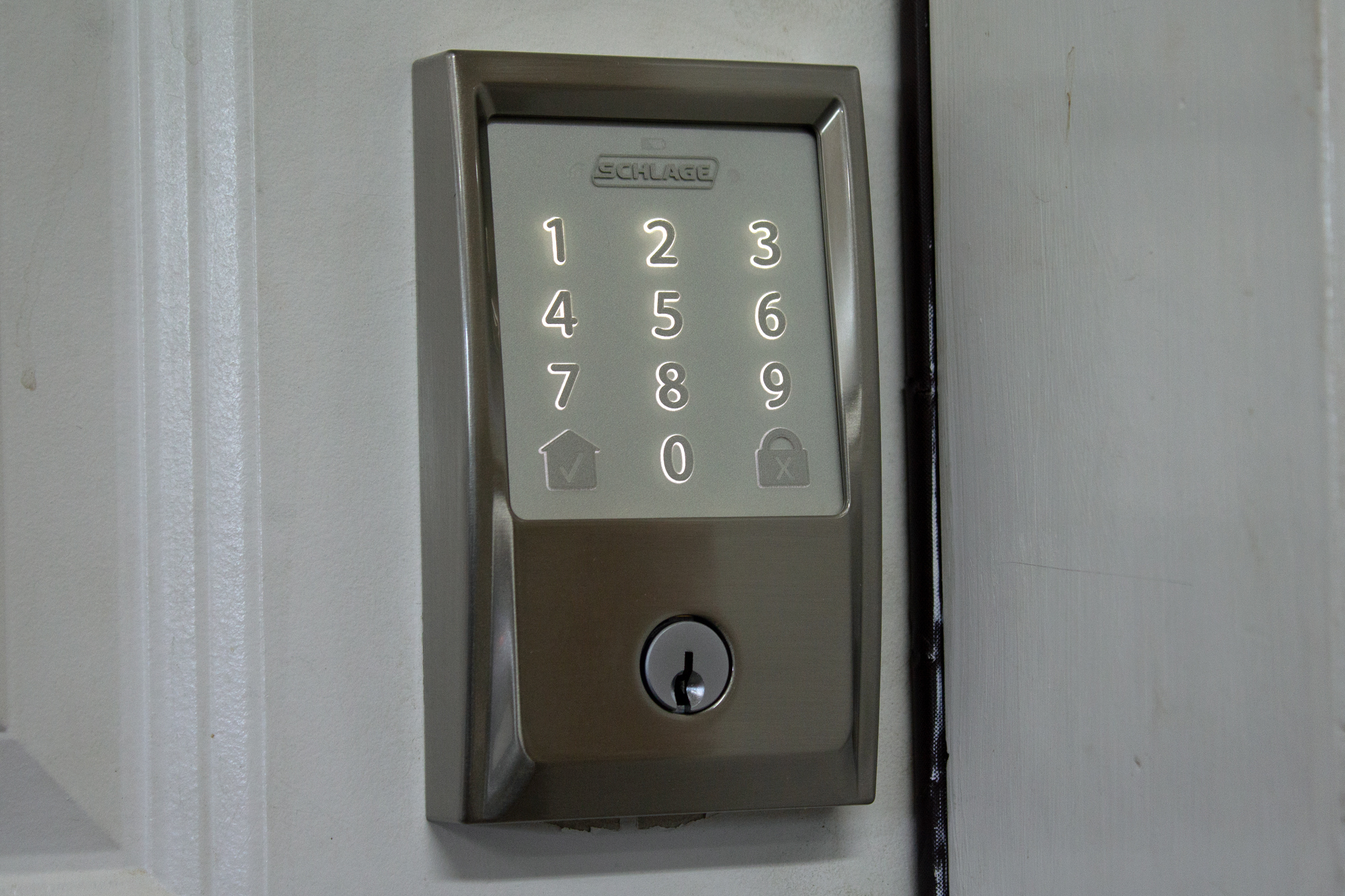 The master and guest accounts you create in the Key by Amazon app carry over to the Schlage Home app, but Schlage’s app offers an optional setting that will notify you with a push message when those guest access codes are used (you can configure this on a per-guest basis). You can also change the access schedule from here.

Schlage’s app also provides the ability to create virtual keys, which grant trusted users the power to use the Schlage Home app to add or remove access codes, change lock settings, and receive notifications. If mom and dad both want access to those settings, one could use the master code and the other could use a virtual key. 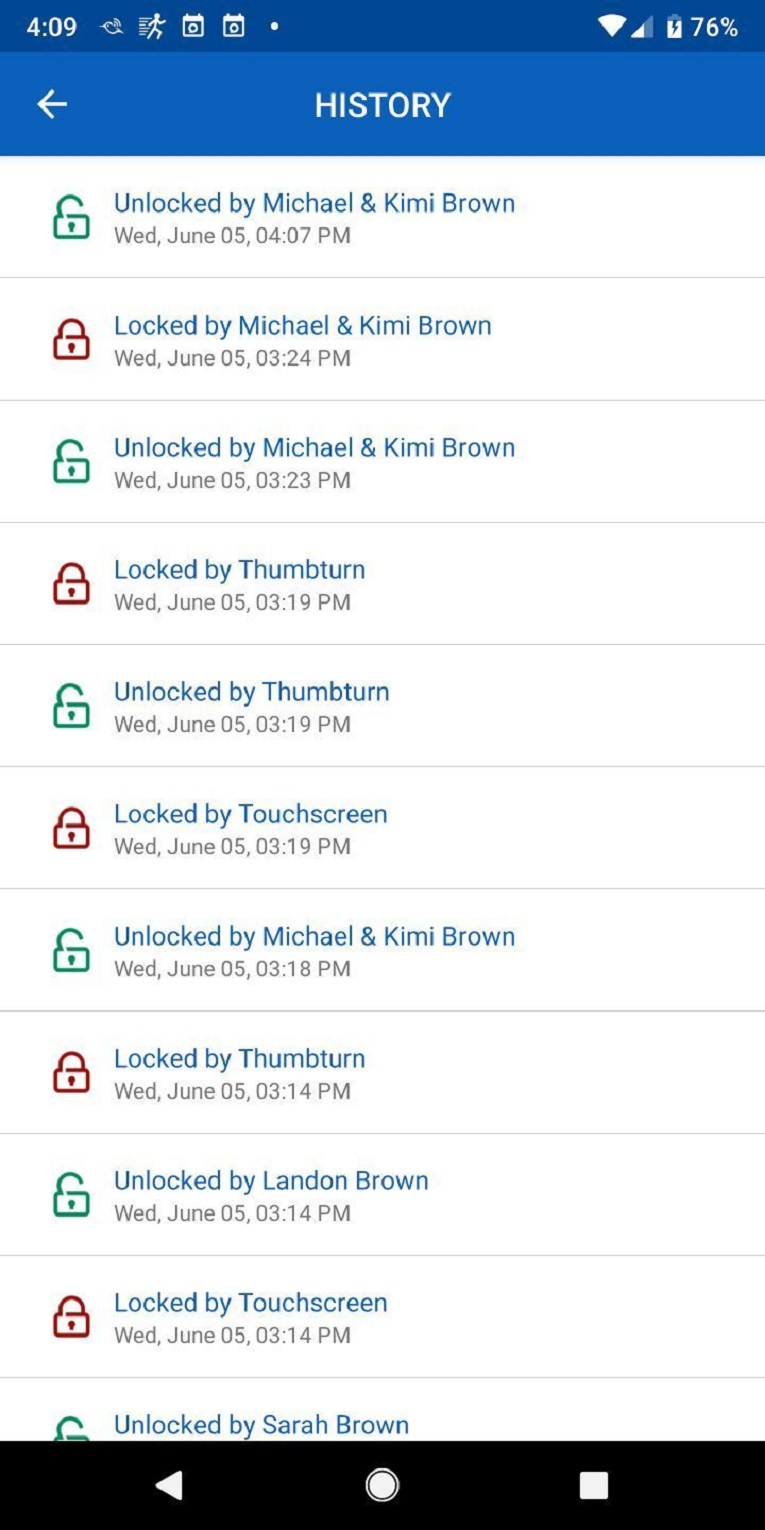 Features in the Schlage Home app include the option to have the lock automatically re-lock itself after an elapsed period of time (ranging from 15 seconds to 4 minutes), enabling or disabling beeping when you touch the numeric keypad, and configuring the aforementioned push notifications (when the door is locked, when it’s unlocked, or both). The Schlage Home app maintains a similar history of events as the Key by Amazon app, but it describes them differently. Where the latter reports “Locked Manual,” for example, the latter tells you “Locked by Thumbturn.”

Once I finally got it set up, I found the Schlage Encode a delight to use. The numeric keypad is well backlit (touch the checkmark icon in the lower left-hand corner to turn it on if it’s dark), the keypad has a textured surface that doesn’t show telltale fingerprints, and the motor is strong enough to slide the bolt into the deadbolt latch even though the door I installed it on is slightly misaligned (the tapered shape of the bolt itself helps in that regard). One minor complaint: The lock’s motor is a bit loud, with a grinding noise that reminds me of teaching my kids how to drive a car with a manual transmission.

This smart deadbolt is a good choice if you’re participating in the Key by Amazon home-delivery service and you’re not also using a Ring Alarm system. On the other hand, if you don’t want to use a smart home hub or home security system at all, the Encode and the Schlage Home app deliver all the features you’ll need in a smart lock.

Very good on its own, but software configuration when pairing with other smart home systems and devices—including Key by Amazon—can be a bewildering experience.

Don't miss a deal at Sky
Best offers at Groupon
Discounts, Sales and Deals at Vodafone UK
Save your money with Farfetch
Online-Shopping with Surfdome
Best products at Boohoo
Latest Posts