Samsung SmartThings Wifi review: A sensible choice for smart homes, but far from the best router

Mesh tech is as beneficial to smart home devices as it is to home networking, so it makes sense to deploy a single product that can handle both missions—provided that single device offers best-in-class performance in both areas. While the second-generation Samsung SmartThings Wifi mesh router is a great smart home hub, it’s far from being a state-of-the-art router. But if you don’t need a top-shelf router, and not everyone does, the SmartThings Wifi’s price tag and its performance as a smart home hub renders it a good enough value.

Like the SmartThings Hub, the SmartThings Wifi router is outfitted with Z-Wave, Zigbee, and Bluetooth radios, so it can control just about any smart home device on the market (although you’ll still need a Philips Hue Bridge to control that brand of lighting; ditto for Lutron hardware). Adding Wi-Fi expands SmartThings’ reach to smart home devices that don’t rely on Z-Wave, Zigbee, or Bluetooth (e.g., LIFX smart bulbs). If your home or apartment is small and you don’t need the range that this $280 three-pack promises, you can buy a single SmartThings Wifi for $120—that should be enough to cover 1,500 square feet. Likewise, if your home is larger than 4,500 square feet, you can buy more satellites to expand the network’s reach. I tested the three-node system in my own 2,800-square-foot smart home. 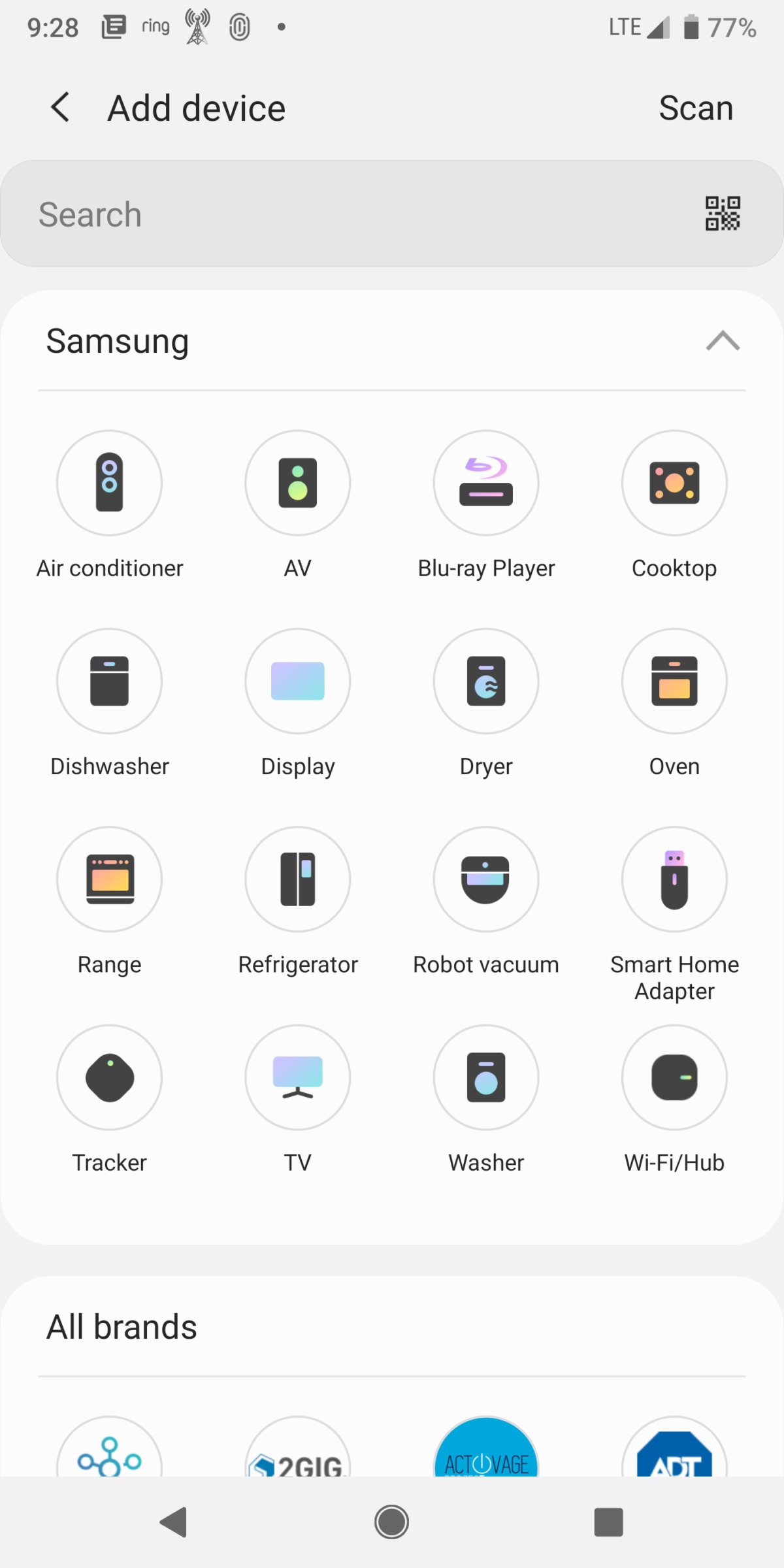 Z-Wave and Zigbee are mesh networks, too, so every smart home device equipped with one of those radios can act as both a client and a repeater. As such, the more compatible devices you deploy around your home, the greater the range of the two networks.

A Z-Wave radio, however, can’t receive and repeat Zigbee traffic, and vice versa. Spread the three SmartThings Wifi nodes around your home, and you’ll effectively blanket it with coverage for all three networks: Z-Wave, Zigbee, and Wi-Fi.

Three downsides you’ll want to be aware of: First, both the SmartThings Wifi and the SmartThings Hub are very much cloud dependent. Many of their smart home features won’t work if you lose your connection to the internet—in the event of a power outage, for instance.

Second, SmartThings isn’t a great home security system because Samsung doesn’t offer a professional monitoring service. If there’s a break-in or a smoke detector goes off in the event of a fire, you’ll need to call the authorities yourself.

Finally, neither SmartThings device includes an LTE module for backup. If an intruder is smart enough to cut your phone or cable line before tripping a sensor, SmartThings won’t be able to alert you.

If you find the last two features important, you might consider a Ring Alarm system as an alternative to SmartThings. To be clear, Ring Alarm does not have an integrated router. And like SmartThings, it is also dependent on the cloud, but signing up for an optional-but-inexpensive professional monitoring service ($10 per month) activates an LTE module for cellular backup. If you sign up for that service and someone breaks in while the system is armed, a Ring representative can dispatch the police to your home (they’ll attempt to contact you first, to avoid reporting a false alarm).

SmartThings Wifi is much less impressive as a router. It’s an AC1300-class, dual-band device, meaning it’s based on the 802.11ac protocol (Wi-Fi 5) and that it operates one network on the 5GHz frequency band delivering up to 866Mbps of bandwidth, and a second network on the 2.4GHz bandwidth offering up to 400Mbps (sum the two numbers and you get 1,266, but Samsung—like every other router manufacturer—rounds up). 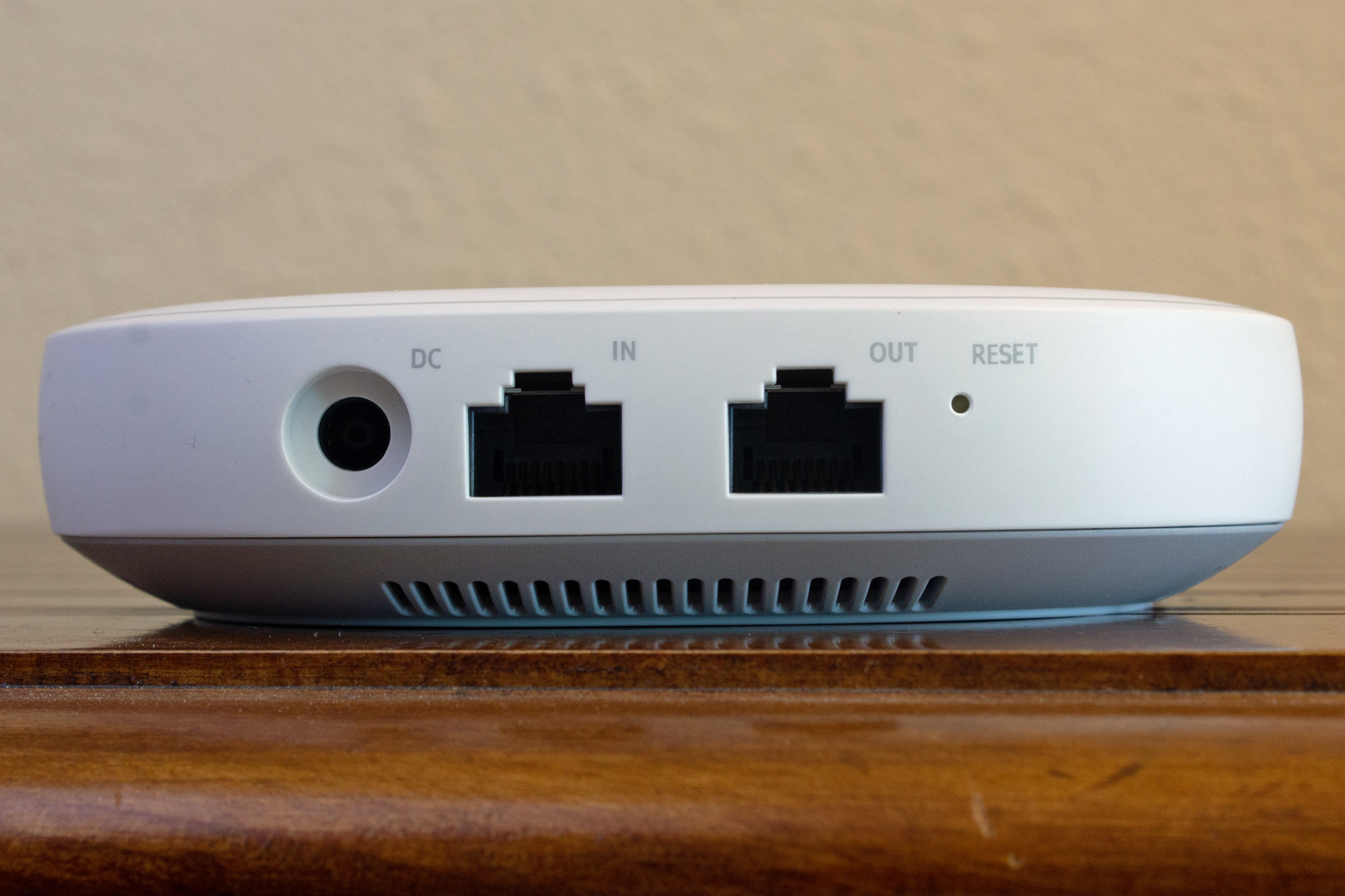 Unlike higher-end mesh routers, such as the Linksys Velop ($385 on Amazon for a three-node system) or Netgear Orbi RBK50 ($295 on Amazon for a two-node system), SmartThings Wifi does not operate a third network that’s dedicated to data backhaul from the satellites to the router. So, in addition to delivering less bandwidth than more expensive routers, some of that bandwidth is consumed by data backhaul. TP-Link’s Deco M9 Plus mesh router also dedicates a third wireless network to data backhaul, and it has an integrated smart home hub. But the Deco M9 Plus supports only Zigbee and not Z-Wave.

All the nodes in the SmartThings Wifi three-pack are identical until you set the system up, at which point the first device that you hardwire to your broadband gateway becomes the router and the other two become satellites when you add them. Installation is handled through a mobile app, and the system is quick and easy to set up.

Each device has a two 1Gbps ethernet ports, so if you have the infrastructure to support it, you can hardwire the satellites directly to your router for wired backhaul that will be much faster than relying on Wi-Fi. This will also render the absence of a dedicated network for wireless backhaul moot, but most homes don’t have ethernet in the walls. (Mine does, but I didn’t benchmark the system that way.) If you have more than one device that you want to hardwire to the router, you’ll need to buy a switch. 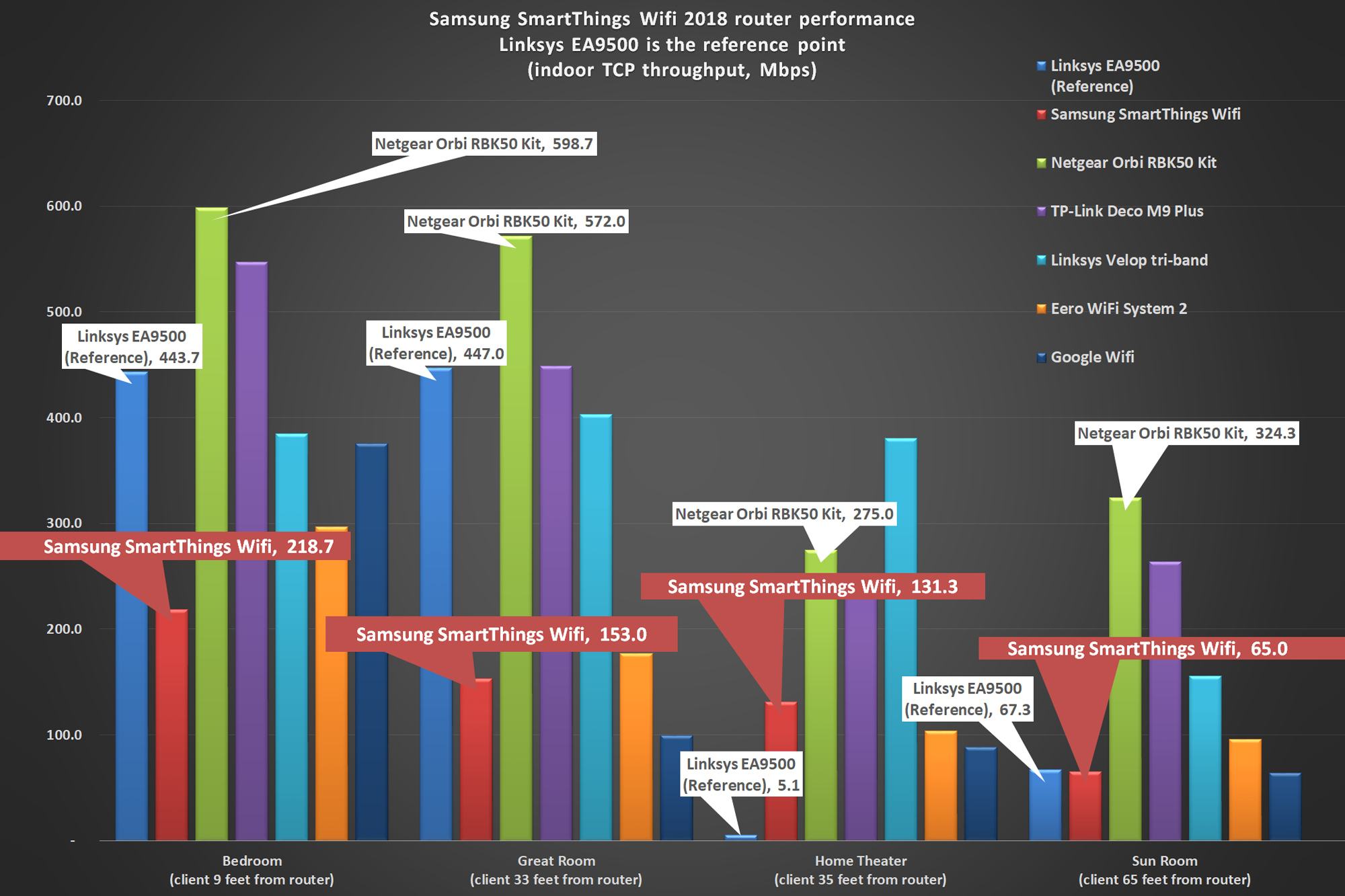 One feature that those more-expensive routers don’t have is Plume’s Adaptive WiFi technology, which Plume says will analyze your network traffic and optimize its performance so that each client connects to the node that will deliver optimal bandwidth for its needs. So, Plume might help make the most of the bandwidth that the SmartThings Wifi can offer, but that doesn’t change the fact that the SmartThings Wifi offers less bandwidth to begin with compared to some other routers. 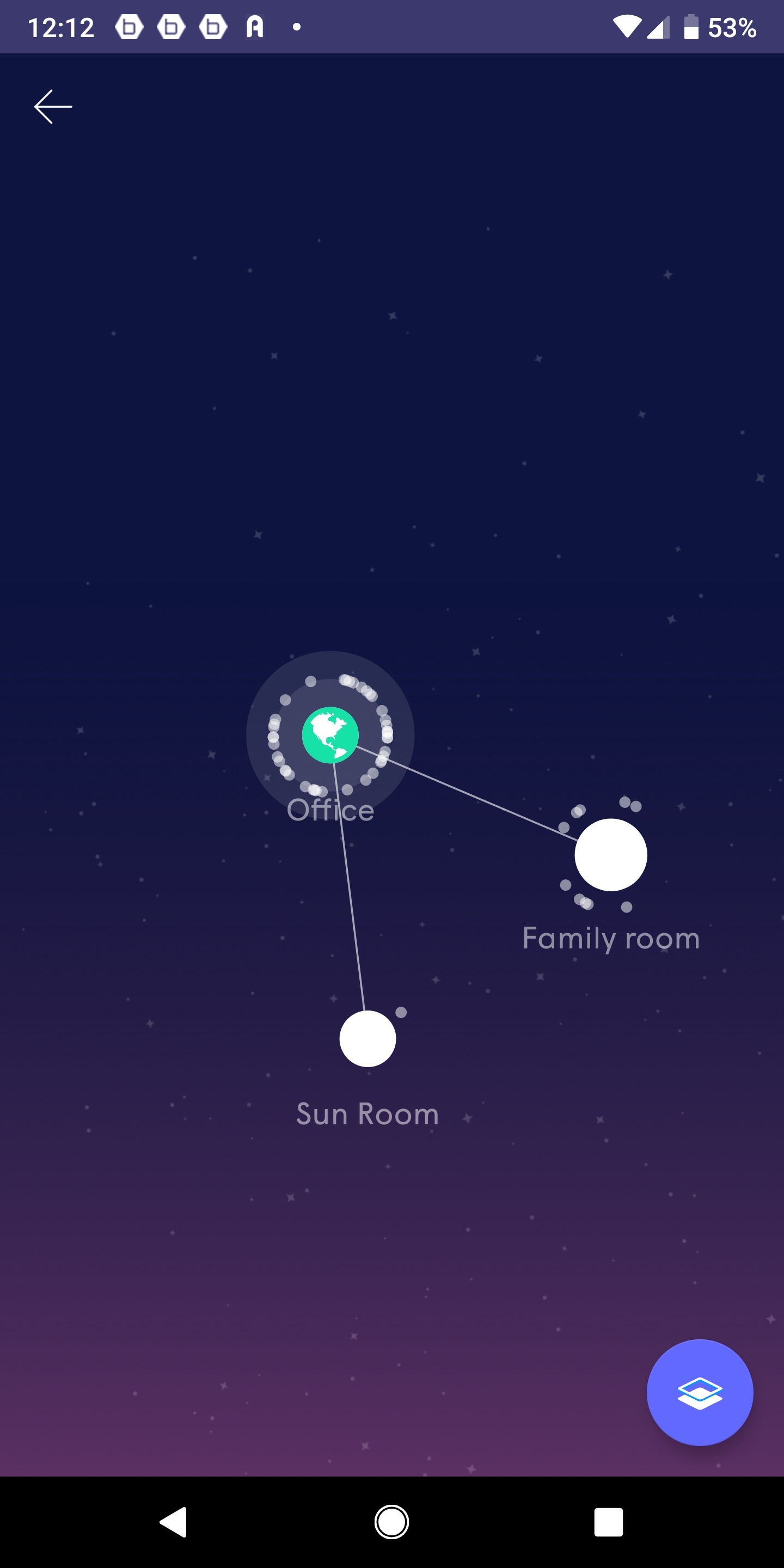 Samsung also relies on Plume for parental controls and anti-malware protection, which means you’ll need to switch back and forth between that and the SmartThings app, depending on what you need to do. (Clicking on the Advanced Settings tab in the SmartThings app launches the Plume app.)

You can assign each device on the network to a family member’s profile, so you can control when that device can access the internet and what it’s allowed to do while online. That type of parental control is increasingly table stakes for consumer routers these days.

Viewed as a smart home hub, SmartThings Wifi is an excellent solution unless you object to its dependence on the cloud, or you’re looking for a home security system that can be professionally monitored. Given that you can deploy it in multiples as part of a mesh network, it’s an even better smart home hub than the latest stand-alone SmartThings Hub. But don’t give up a superior router you might already have just to get a smart home hub. Buy the SmarThings Hub, instead.

SmartThings Wifi is less impressive when viewed as a mesh router, because it doesn’t offer nearly as much bandwidth as many other mesh routers we’ve tested. If you need a smart-home hub and a high-performance home network, you’re better off buying discrete components for each job. If you want to build out a smart home, but you have just a few devices that need Wi-Fi access simultaneously, SmartThings Wifi will save you cash and be easier to manage. After all, there’s no sense in paying for router performance you don’t need.

Samsung SmartThings Wifi is a much better smart home hub than it is a router or a home security system. But that doesn’t mean it’s not a good value for the right buyer.

Don't miss a deal at Farfetch
Best offers at Go Daddy
Discounts, Sales and Deals at The Home Depot
Save your money with Virgin Media
Online-Shopping with Marks and Spencer
Best products at H&R Block
Latest Posts