If you want to bring rich, detailed, and immersive sound into your living room with a minimum of components and fuss, Samsung’s HW-Q70R soundbar should be near the top of your shopping list. At $700, the HW-Q70R is as pricey as some higher-end soundbars we’ve reviewed, but given that Samsung’s top-of-the-line soundbar sells for twice as much, $700 appears to be the new mid-range.

Price tags aside, the HW-Q70R soundbar and its wireless subwoofer make for an easy way to get dazzling Dolby Atmos and DTS:X surround sound, while a convincing pseudo-surround mode adds surprising depth to other content. If you want true surround sound, however, you’ll need to drop an additional $100 for Samsung’s SWA-8500S wireless rear speaker kit (available on Amazon). Samsung did not send the kit for review.

Boasting Harman Kardon-designed audio (Samsung acquired Harman International in 2017), the HW-Q70R is a 3.1.2 soundbar, which means it has dedicated left, right, and center drivers (with the center channel being particularly important for delivering clear dialog); up-firing left and right drivers for immersive, object-based Dolby Atmos and DTS:X with audio height cues achieved by bouncing sound off your ceiling; and a wireless subwoofer for deep bass response and low-frequency effects in movie soundtracks.

On the bottom of the soundbar, you’ll find a pair of cavities where the various ports and buttons sit. A button on the left-hand side lets the soundbar connect to your Wi-Fi network (with a little help from the Samsung SmartThings mobile app), along with a microSD service port and a 19V DC power port. The cavity on the right-hand side hosts one HDMI input, one HDMI-ARC (so your TV can send audio from its onboard tuner and video-streaming apps back to the soundbar), and a TosLink (optical) digital audio input. 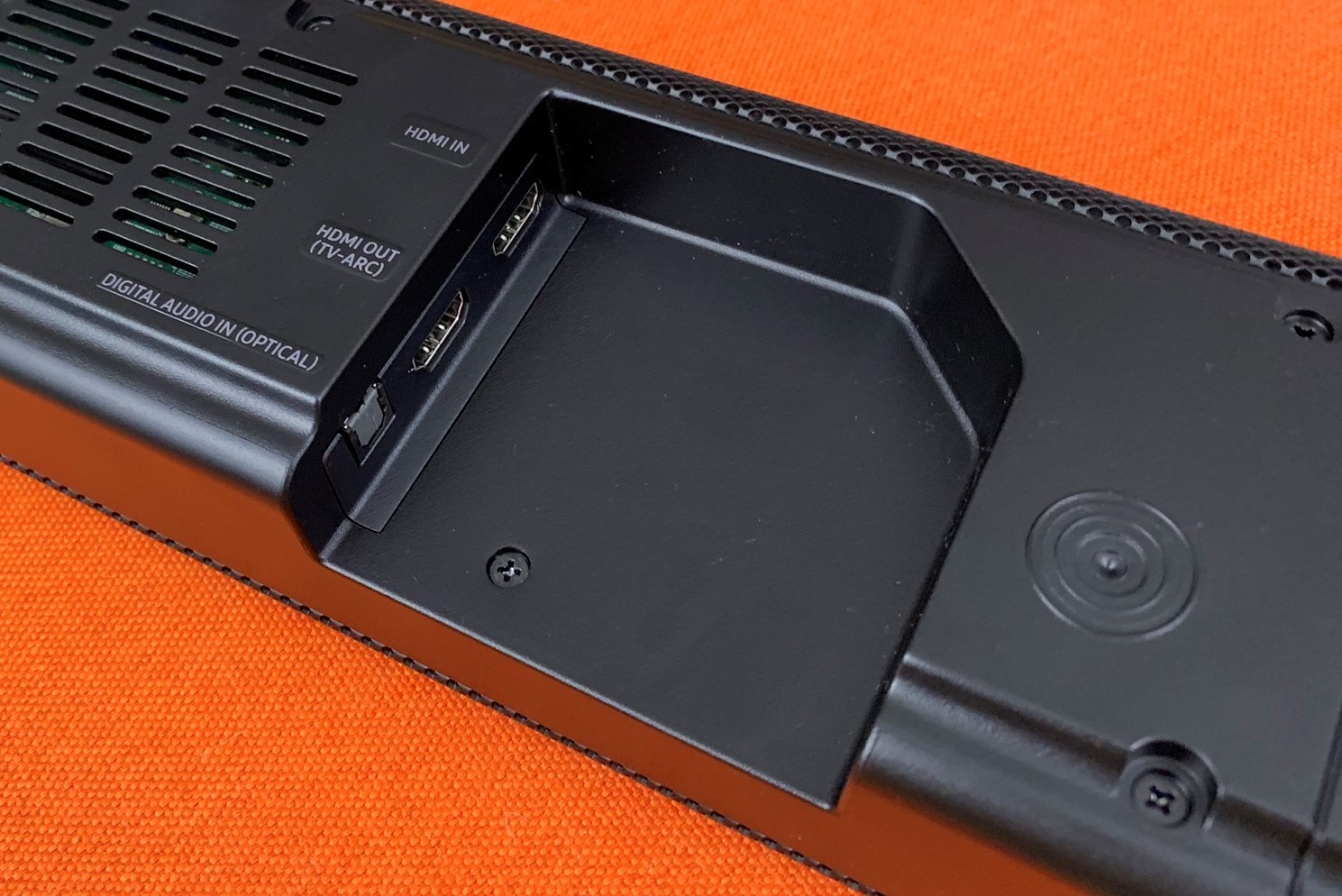 Since the HW-Q70R only has a single HDMI input, you’ll need to manually swap out the cable if you want to switch to another video source (such as a game console or a Blu-ray player).This is essential if you want Dolby Atmos output via the lossless Dolby TrueHD format (a Toslink connection cannot provide enough bandwidth)..

If you don’t want to be switching cables all the time, you can also connect all your video sources to your TV, and then send audio back to the soundbar using HDMI-ARC. The drawback to relying on ARC for audio is that you’ll have to settle for lossy Dolby Atmos via Dolby Digital Plus. If the speaker supported Enhanced Audio Return Channel (eARC, which offers more bandwidth), this wouldn’t be an issue.

Once you have the soundbar connected to your TV and the subwoofer, you can also connect it to your Wi-Fi network using the Samsung SmartThings app. Just install the app on your iOS or Android device, sign into or create a SmartThings account, press the Network button on the soundbar, and then discover it using the app.

Once the SmartThings app has the soundbar on its radar, you can connect it to your Wi-Fi network, add it to a “room” in your smart home, and then control it like any of your other SmartThings devices. You can also control your Wi-Fi-connected soundbar with Amazon Alexa voice commands, or stream music to it via Spotify and other compatible music-streaming services. Last but not least, the SmartThings app lets you fiddle with the soundbar’s EQ settings.

The AA battery-powered remote that comes with the HW-Q70R is pretty much identical to those that come bundled with other Samsung soundbars. Some TechHive contributors have praised this remote; but as a newcomer to Samsung’s ecosystem, I found it a bit confusing, particularly when digging into the HW-Q70R’s various settings.

Pressing the Settings button cycles through a variety of options, such as fiddling with the relative levels of the drivers, tweaking treble and bass, and toggling the Virtual setting on and off (more on the Virtual setting in a moment). But I couldn’t figure out how to change the settings themselves. Turns out you’re supposed to press “Up” on the circular four-way directional control, which is unmarked. 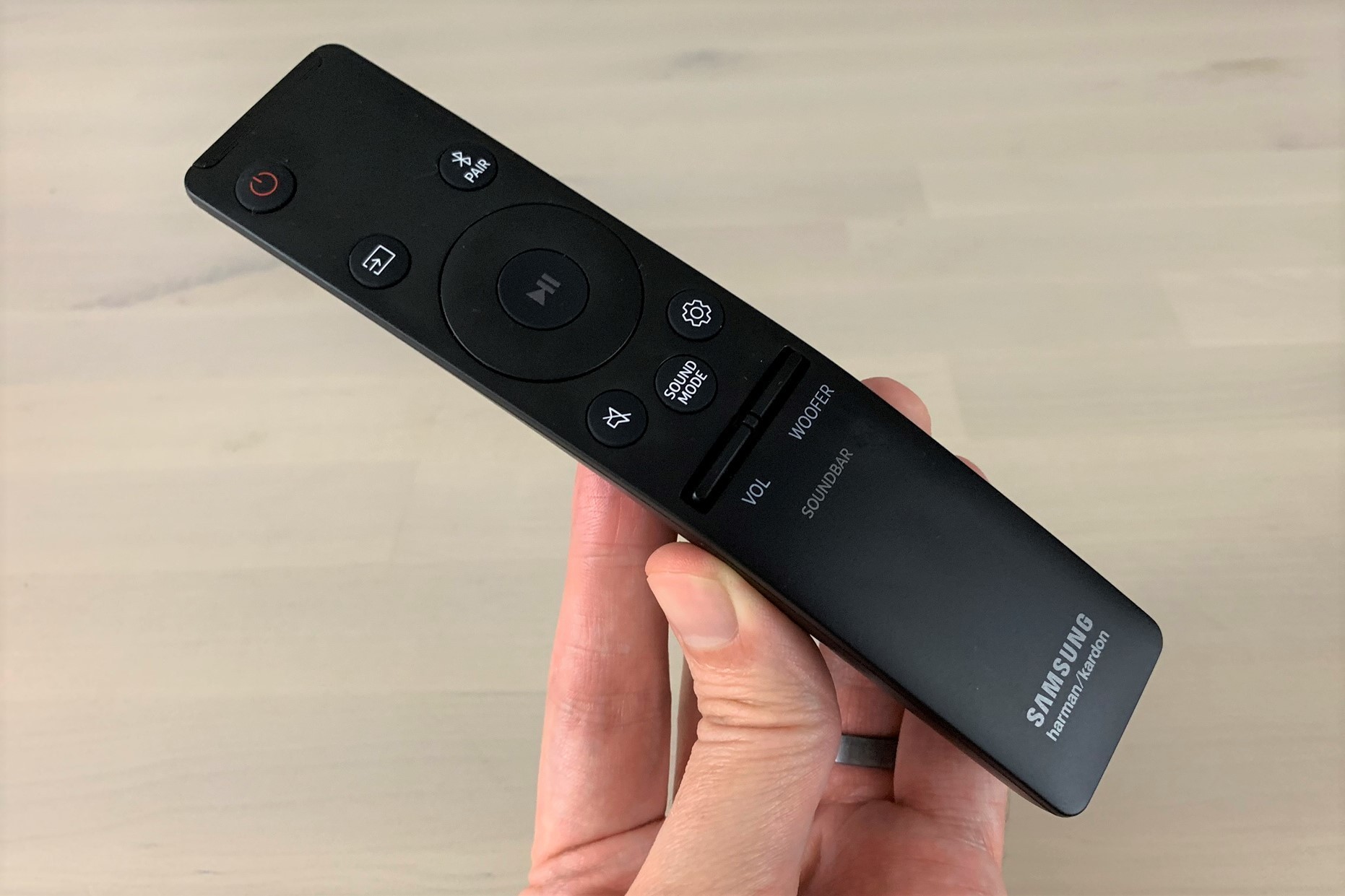 Once I figured that out, the rest of the remote was fairly easy to master, with a pair of thin volume rockers for the main speaker and the subwoofers, a mute button, a Sound Mode button that cycles through a quartet of sound profiles (we’ll get to them in a second), an input button, and a Bluetooth pairing button (which paired the soundbar with my iPhone in a snap). Indeed, one good thing I’ll say about the remote is that it isn’t crammed with a confusing array of buttons.

If you have a 2013 or newer Samsung Smart TV, you can also tinker with the soundbar’s settings using the on-screen Samsung TV menu. Since I have a Sony TV, I wasn’t able to test this feature—and indeed, limiting on-screen setup for the soundbar to a particular brand of TV seems needlessly restrictive.

Once you turn on your TV, the three-character (four-character, in the case of HDMI) display on the right front side of the soundbar lights up, telling you which input it’s using. This display goes dark after a few seconds, and thankfully there are no other distracting lights or indicators to pollute your darkened home theater. As you’re watching TV or listening to music, you can try out the soundbar’s various sound modes by repeatedly pressing the Sound Mode button on the remote.

For starters, Standard puts the soundstage squarely front and center, with little in the way of surround effects. The Standard setting is a sensible choice for listening to music unadulterated with distracting sonic effects, and I wasn’t disappointed as I teed up Carlos Kleiber’s thrilling interpretation of Beethoven’s Fourth Symphony on the Orfeo label, complete with its rich, swelling strings and pulse-quickening timpani. I also tried the title track from Bruce Springsteen’s The Ghost of Tom Joad and soaked in The Boss’s quiet performance with acoustic guitar and harmonica in the spare opening section, eventually accompanied by punchy percussion and a warm synthesizer.

As solid as the Samsung’s Standard mode sounds, the Surround mode manages to dramatically expand the soundstage without sounding gimmicky. With help from Samsung’s Acoustic Beam technology (which channels soundwaves through an array of holes), sound effects convincingly slip to the sides of the soundstage, as if there were left and right speakers placed somewhat forward of the screen.

Virtual rear effects aren’t quite as vivid as on competing soundbars with more aggressive virtual surround modes, but that’s actually a good thing. Instead of overreaching, the HW-Q70R’s surround mode delivers a satisfying rear presence without getting bogged down in distracting, synthetic-sounding surround effects. As a listener who’s accustomed to a traditional 5.1-speaker setup, I could certainly live with Samsung’s virtual surround mode if I had to give up physical rear speakers.

There’s also a Game mode that takes the soundbar’s surround mode up a few notches, which may be fine for gaming but starts heading into distracting territory for movies and TV shows.

Much better is the Adaptive mode, which adjusts the soundbar’s surround effects depending on what’s on the screen. After some initial tinkering, I parked the Samsung’s sound mode in the Adaptive setting and was pretty happy with it, with the surround effects (once again) sounding appealing without calling undue attention to themselves.

Beyond the main sound modes, there’s also a “Virtual” setting that upmixes a height channel for shows, movies, and games with 5.1 or 7.1 soundtracks. Don’t expect dramatic effects swirling around your head with the Virtual setting on; instead, it’s far more subtle, merely filling out the upper region of the soundstage, similar to how the Surround sound mode fills out the rear.

The HW-Q70R is one of many soundbars vying to bring the immersive sound of Dolby Atmos into your living room. A sound format that aims to precisely place “audio objects” (up to 128 at a time) in a 3D space, versus the 2D sounds you’ll hear in standard 5.1 or 7.1 surround systems that lack a height channel, Dolby Atmos (and its competitor, DTS:X) more typically depends on speakers installed in the ceiling to deliver the sense of sound effects coming from above. 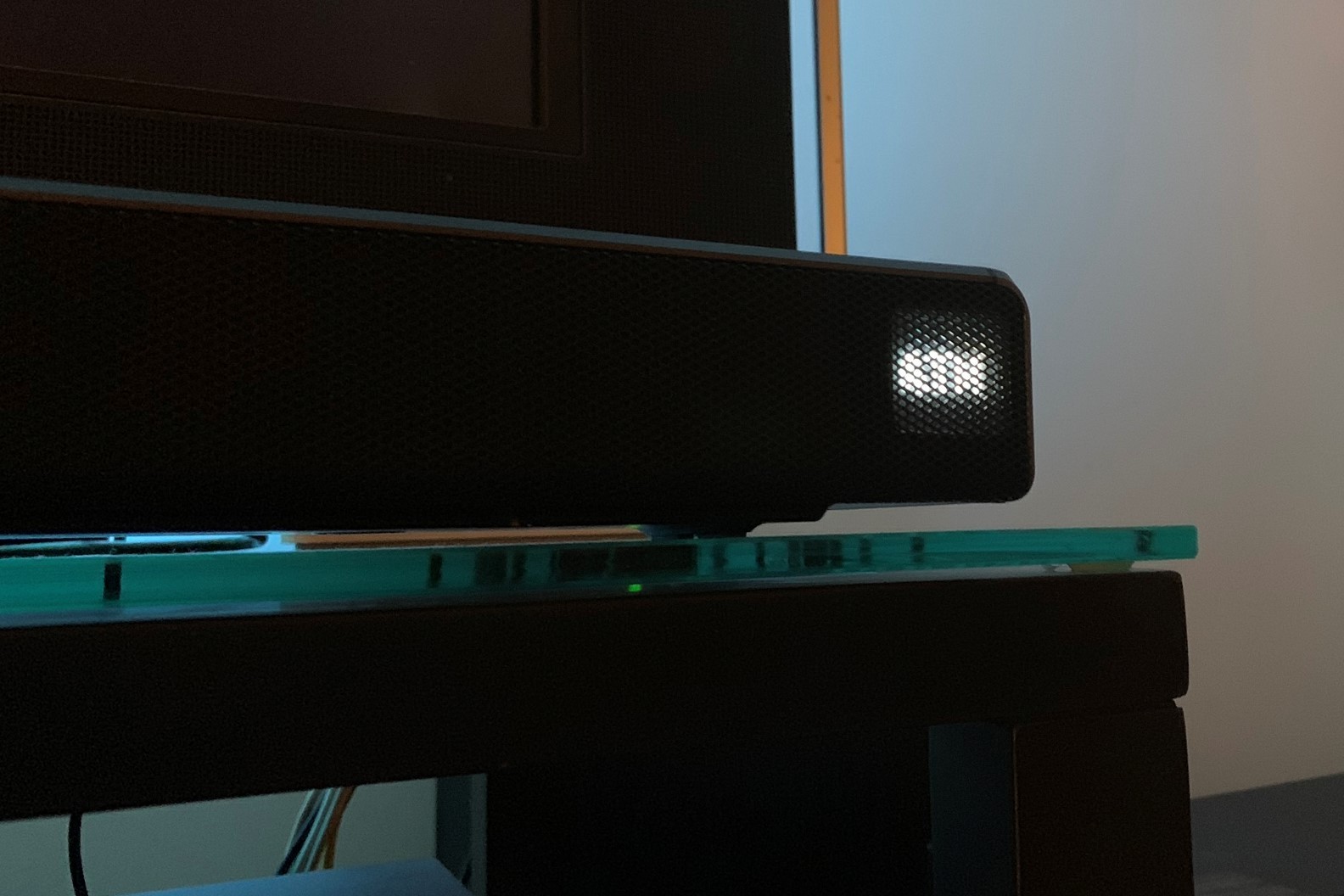 For those of use who don’t have the time, money, or inclination to cut holes in the ceilings, speakers or soundbars with up-firing drivers can simulate a physical height speaker by bouncing sound off the ceiling at about a 20-degree angle. For the effect to work properly, you’re supposed to have a flat ceiling between seven and 14 feet high; no peaked or dropped ceilings will do.

First, I queued up one of our favorite Dolby Atmos demos: the scene in X-Men: Apocalypse where a younger Cyclops (a.k.a. Scott Summers) blows a hole in a bathroom ceiling with the energy beams shooting out of his eyes, which sends debris crashing to the floor (it’s at about the 10:08 mark if you’re interested).

With a good audio system, this scene can make you feel like plaster is falling all around you, and the HW-Q70R does a nice job of putting you in the action, with the clattering debris particles sounding distinct but not too harsh, with a deep bass layered underneath. You certainly get the feeling of sound effects from above, although without a set of rear surround speakers, the sounds behind you are much less distinct—again, think more of a presence rather than clear, specific audio objects.

Next, I dialed up the famous opening credits from the Dolby Atmos-remastered Superman from 1978, and as Marlon Brando’s credit swoops up and over the screen, I could hear the “whoosh” over my head—and yes, I got chills. (I saw Superman during its original run when I was 9, so there’s a nostalgia factor at work.) And when the Superman logo appears, there’s an appropriately deep thump of bass, along with John Williams’s crisp, clean, and triumphant score. Pretty cool.

For something a little more detailed, I streamed an official Dolby Atmos trailer via AirPlay to my Apple TV, which transmitted the Dolby Atmos soundtrack intact. In Dolby’s “Leaf” trailer, the camera snakes through a maze of twigs and branches, finally focusing on a leaf that detaches with a crisp snap and flutters slowly to the ground, swirling side to side and above and below the frame, and you can hear the leaf’s whispers all the way down, although as before, rear details are far less pronounced than they are from the front and above. Again, quite impressive.

Yes, it’s pricey, but the Samsung HW-Q70R soundbar lets you add rich, detailed, and immersive sound, complete with Dolby Atmos and DTS:X support, to your TV in a matter of minutes. The HW-Q70R’s remote takes getting used to, and it’s annoying that you need a compatible Samsung TV for on-screen setup. Still, the soundbar delivers convincing surround sound even without Samsung’s optional rear surround speakers, and you can always sprint for an optional, reasonably priced wireless surround kit to add more rear soundstage detail.

The Samsung HW-Q70R soundbar lets you add rich, detailed, and immersive sound, complete with Dolby Atmos and DTS:X, to your TV in a matter of minutes.

Previous ArticleKingston A2000 NVMe SSD: Fast and cheap, at 10 cents per gigabyte
Next ArticleGoogle Nest camera users can no longer disable the status light
Comments (0)