With the best battery life from a smartphone we’ve ever seen, the Samsung Galaxy M31 keeps on ticking

Aren’t modern smartphones magnificent? They’re already miles better than we ever dreamed possible, with high-powered internals, big high-resolution screens and high-end cameras, but there’s one area that hasn’t improved quite as much in recent years, and that’s battery life.

Some phones have managed to buck the trend, but for the most part, there haven’t been any major advances in the stamina department since the launch of the Lenovo P2 way back in 2016. It also didn’t help that this was mysteriously pulled from shop shelves barely a few months after release.

Back to the present, and we finally have a glimmer of hope. Samsung’s Galaxy M31 has travelled the long journey from India, arriving for the first time on UK shores and packing a gigantic 6,000mAh battery. How did it fare in our tests? Let’s find out.

Samsung Galaxy M31 review: What you need to know

Samsung’s low-end smartphones have quickly become the byword for “quality on the cheap”, but nothing, Samsung or otherwise, has used a battery as big as this. Even the Lenovo P2, which has been sitting at the top of our battery life hierarchy since its release, “only” had a 5,100mAh battery. 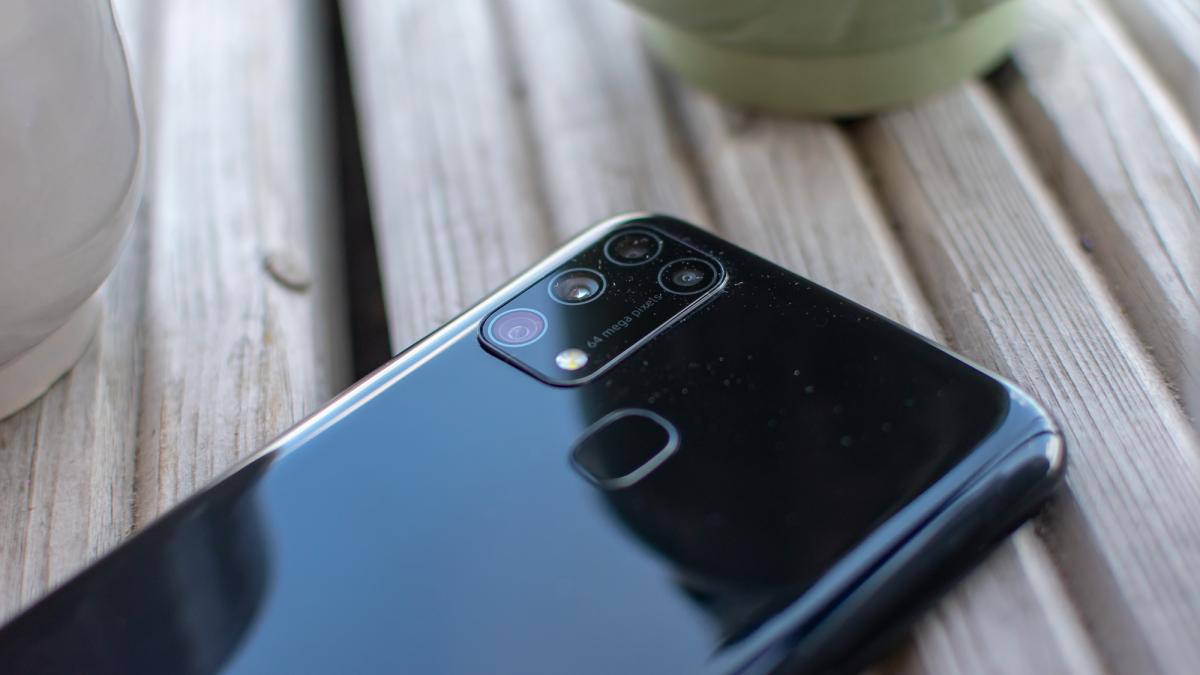 What else has the Galaxy M31 got going for it? Well, it has a 6.4in Super AMOLED display, is powered by Samsung’s own Exynos 9611 processor with 6GB of RAM and 64GB of expandable storage and it runs Android 10. It also has four rear cameras, the main 64-megapixel snapper accompanied by an ultra-wide, macro and depth sensor.

As you might have guessed, yet another positive of note is the price. The Galaxy M31 is exclusive to Amazon in the UK, and only costs £245. This represents stonkingly good value for money, whether or not battery life is your number one priority.

It’s significantly cheaper than most of Samsung’s smartphone range, undercutting stablemates such as the Galaxy S20 by a wide margin and even a couple of Galaxy A-series phones too. 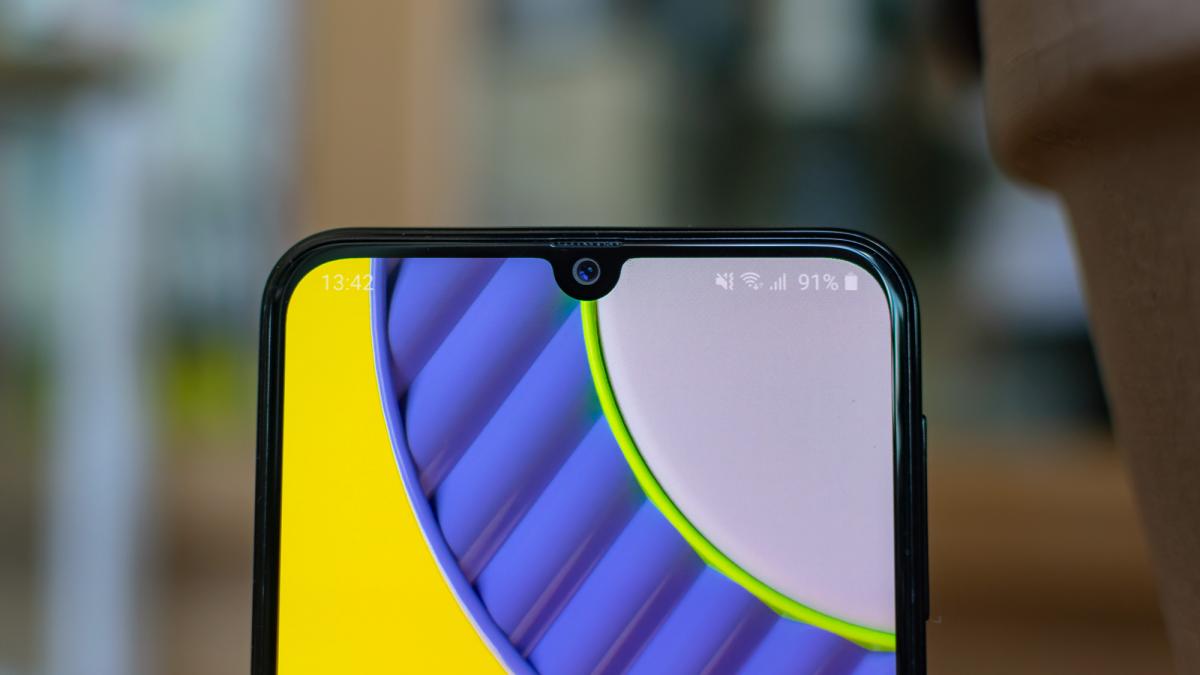 That’s some remarkably strong competition but the Galaxy M31 isn’t exactly off to a flying start when it comes to its looks. Its design could best be described as “functional”; it’s boring to look at with its greasy fingerprint-friendly plastic back and thick, black bezels surrounding the screen. At 8.9mm thick, it’s also a little fatter than flagships such as the Galaxy S20, but that can be excused somewhat considering the extra-large battery. 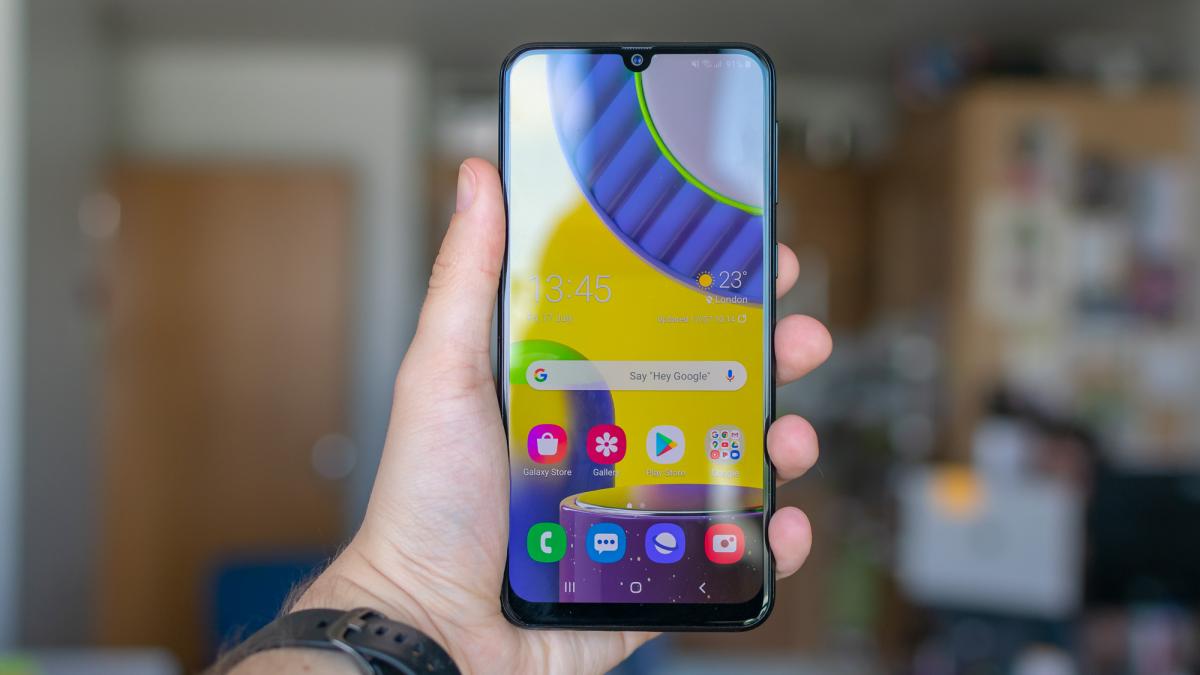 Still, there are a few positives to be found design-wise. The selfie camera is neatly placed in a semi-circular drop-notch at the top of the screen, and the display itself is protected from drops and scrapes to some degree with a layer of Gorilla Glass. I also liked the sensibly-positioned oval fingerprint reader on the back of the phone and the addition of a 3.5mm headphone jack is, likewise, appreciated.

The Galaxy M31 charges via a USB-C port at the bottom, which means its beefy battery should charge nice and fast. The phone also supports contactless payments via NFC and can be unlocked via facial recognition. Unfortunately, there’s no official IP-rating for dust or water protection.

On a happier note, the Galaxy M31 has a lovely-looking Super AMOLED screen. It measures 6.4in across the diagonal, has a resolution of 2,340 x 1,080 and a pin-sharp pixel density of 403ppi.

In technical testing, I measured screen brightness peaking at 568cd/m. in automatic mode, promising readability in most conditions in the UK. The Galaxy M31 has two display modes to choose from, with the phone’s “Natural” profile being the most colour-accurate. According to my colour calibrator it covers 99.7% of the sRGB colour space, with a total volume of 104% with an average Delta E (colour accuracy) of 1.94.

By comparison, that’s actually a better result than the Galaxy S20’s measurements, which costs more than three times the price. If you prefer overly bright, vivid colours, there’s no need to switch from the default “Saturated” colour mode but this certainly isn’t to my taste.

Thanks to that AMOLED panel, the contrast is effectively perfect, meaning images have real presence and “pop” and viewing angles are very good. This is a mighty fine screen for the price, no question about it.

Inside the Samsung Galaxy M31, you’ll find one of Samsung’s homebrew Exynos 9611 chipsets, a generous 6GB of RAM and 64GB of internal storage, which can be expanded up to 1TB via microSD. We’ve already seen this processor make an appearance in the Galaxy A51, as well as the Galaxy Tab S6 Lite, and Android feels every bit as responsive in operation here, as it did on those devices.

Running the Geekbench 4 CPU test, it’s clear that the Galaxy M31 is a bit behind the pace, however; even the Xiaomi Redmi Note 9, which costs less than £200, is faster than it. Real-world performance is far from abysmal but you may well notice the occasional stalled moment when opening up an application, or when booting up the phone.

It’s a similar story when it comes to graphical grunt, with the Galaxy M31 only managing to outperform the much cheaper Galaxy A21s in the GFX Bench Manhattan 3 test. An average frame rate of 24fps isn’t the worst I’ve seen, not by a long stretch, but don’t expect smooth performance during competitive games of Call of Duty Mobile, unless you’re prepared to dial back the visual settings.

As you might have guessed from the first few paragraphs of this review, the Galaxy M31’s battery life is the main reason you’re going to want to pick up this phone. With that gigantic 6,000mAh battery, Samsung’s budget handset lasted a whopping 30hrs 20mins during our continuous video playback test, with all data connections switched off and the screen brightness set to 170cd/m2.

What does this mean for real-world battery life? Well, you should comfortably hit two days of use on a single charge, with perhaps a little bit of wiggle room on day three, too. On a personal note, I accidentally left it switched on in my desk drawer for an entire weekend, and it only dropped 2% of its total charge (without a SIM card inside).

We could easily end there, but of course, we still have to talk about the Galaxy M31’s cameras. The Galaxy M31 has a quadruple-camera array: the 64MP (f/1.8) snapper is chaperoned by an 8MP (f/2.2) ultra-wide lens, 5MP (f/2.4) macro unit and, finally, a 5MP (f/2.2) depth sensor for more effective-looking blurred background portraits.

The Galaxy M31’s cameras are very, very good for the price. No matter the lighting conditions, the Galaxy M31 captures pictures that are filled to the brim with intricate details, with well-judged exposure and pleasingly-accurate colour rendition. There isn’t much visual noise either, even inside when the light isn’t quite so abundant.

The camera software is simple and easy to use and can be navigated with simple left/right swipes to access shooting modes such as hyper-lapse, 960fps slow-motion recording, night and macro settings. The Galaxy M31’s “live-focus” portrait mode is as great as ever, too, allowing you to adjust the level of background blur before or after you capture the image.

Video recording is equally impressive. While you’re limited to 30fps recording, both 4K and 1080p footage looks crisp and detailed, and the image stabilisation is rock solid.

Does any of this really matter, though? It could be argued that even if the Galaxy M31 was a disappointment in other areas, its trend-setting battery life would be worth a recommendation on its own.

Thankfully, it also manages to do a mighty fine job across the board. For £245, you’re getting a pretty impressive smartphone that’s fast enough for most people, with a great screen and an excellent suite of cameras. This is a phone that’ll be more than good enough for the majority, even before you take that monstrous battery life into account.

Yet still we come back to the Galaxy M31’s amazing battery life. There’s honestly nothing quite like it around at the moment, so if you’re fed up with your two-year-old iPhone keeling over after just a few hours, do yourself a favour and ditch that portable battery pack and move over to the Samsung Galaxy M31 instead.

Don't miss a deal at Mobiles
Best offers at EBay DE
Discounts, Sales and Deals at Adobe
Save your money with Udemy
Online-Shopping with Brian Tracy
Best products at Vimeo
Latest Posts