Countless stereo systems could get a supercharge from a Russound MBX-PRE wireless streaming media player. Boasting fine sound, major content partners, and all manner of connectivity, this little black box will carry your treasured vintage stereo equipment into the online-everything age. Multiples of them can bring music into every room in your home. Just bring your own amp and speakers.

In that regard, the MBX-PRE is a lot like the Sonos Connect (since replaced by the Sonos Port, which I reviewed in June). But Russound is no copycat; in fact, the company is one of the pioneers of whole-home audio, having got its start 45 years ago when every speaker pair in every room had to be hardwired to an in-wall volume control harnessed in turn to a matrix switcher or a multi-zone amplifier. Russound still recommends hiring a professional installer to set up its systems, but the company doesn’t freeze DIYers out (I’ll get deeper into that later). You will, however, need to purchase its gear from an authorized dealer (and Amazon is not in that club).

Unlike Sonos’ offering, the MBX-PRE is a Hi-Res Audio certified player that supports audio files encoded with up to 24-bit resolution and at sampling rates as high as 192kHz. The player doesn’t support MQA files, but it can handle AAC and AAC+ (up to 24-bit/192kHz), FLAC (8- and 16-bit), WAV (8- and 16-bit), OGG Vorbis, and MP3 (CBR and VBR) files. Russound recommends connecting its hardware to a UPnP server running on a NAS box (such as the QNAP TS-253D TechHive recently reviewed), but I had great experiences streaming 16-bit/44kHz FLAC files from Tidal and Deezer. They compared very favorably to the CD versions I spun on an Oppo BDP-103 disc player. 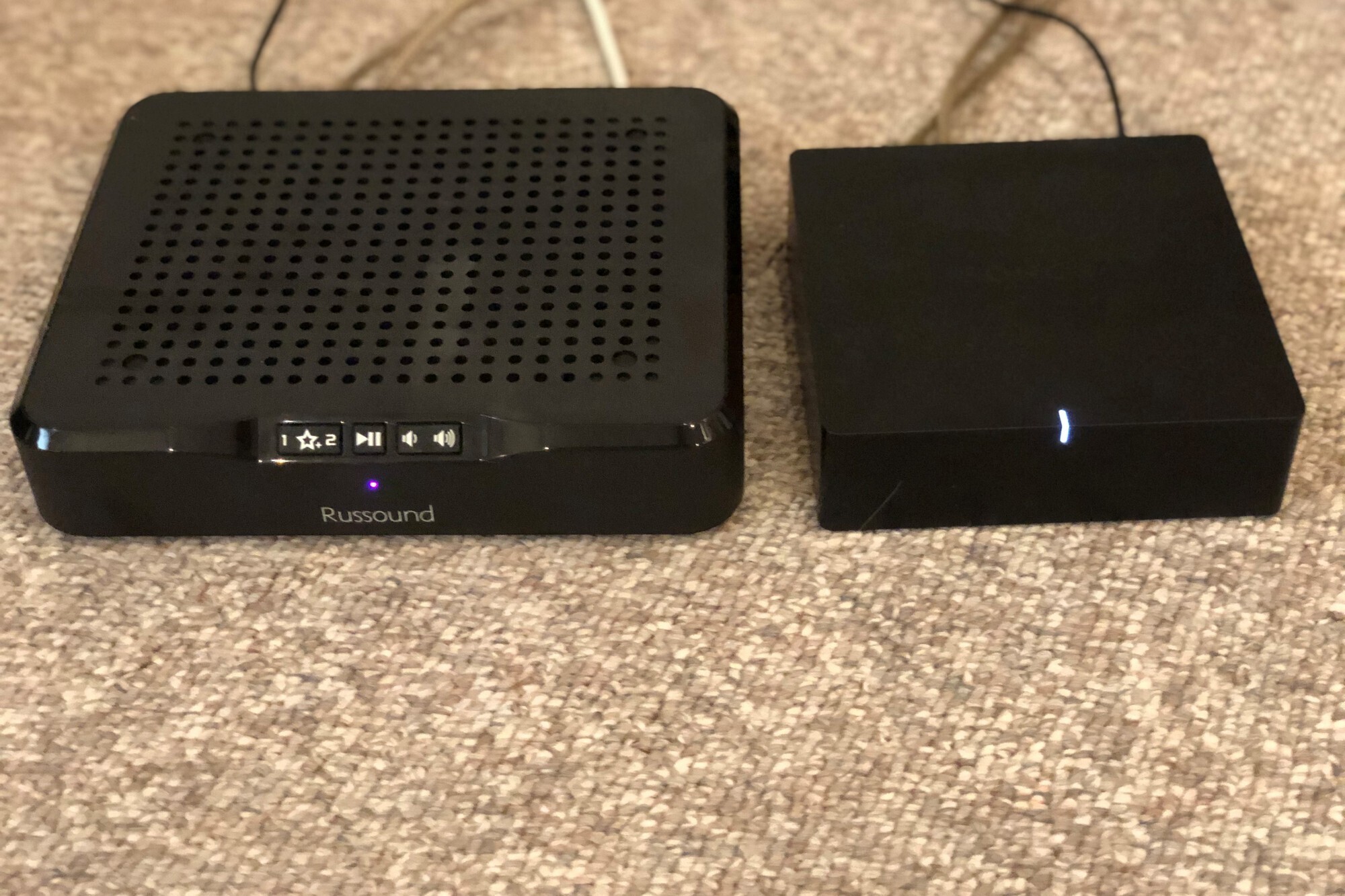 You can also stream music from Android and iOS devices via Bluetooth, Apple AirPlay (AirPlay 2 support is still in the works), and Chromecast. And you can control the system with voice commands spoken to a Google Assistant-compatible smart speaker (I tested it with a first-gen Google Home, a Nest Home Mini, and the recently reviewed JBL Link Music). Training the system to respond to Amazon Alexa commands is also possible, but that software isn’t as baked in.

Russound also offers a version of this streamer with an integrated amplifier (the MBX-AMP), but as this unit’s name implies, the MBX-PRE is a pre-amplifier component. As such, it features a full complement of inputs and outputs, including 3.5mm analog and Toslink optical digital audio inputs; and RCA analog and Toslink digital audio outputs. The absence of coaxial digital audio ports is a little surprising, given Russound’s focus on the custom-installer market, but Sonos doesn’t put any digital audio input on its Port. You’ll find a 12-volt trigger output on both devices for signaling a compatible outboard amp or receiver. 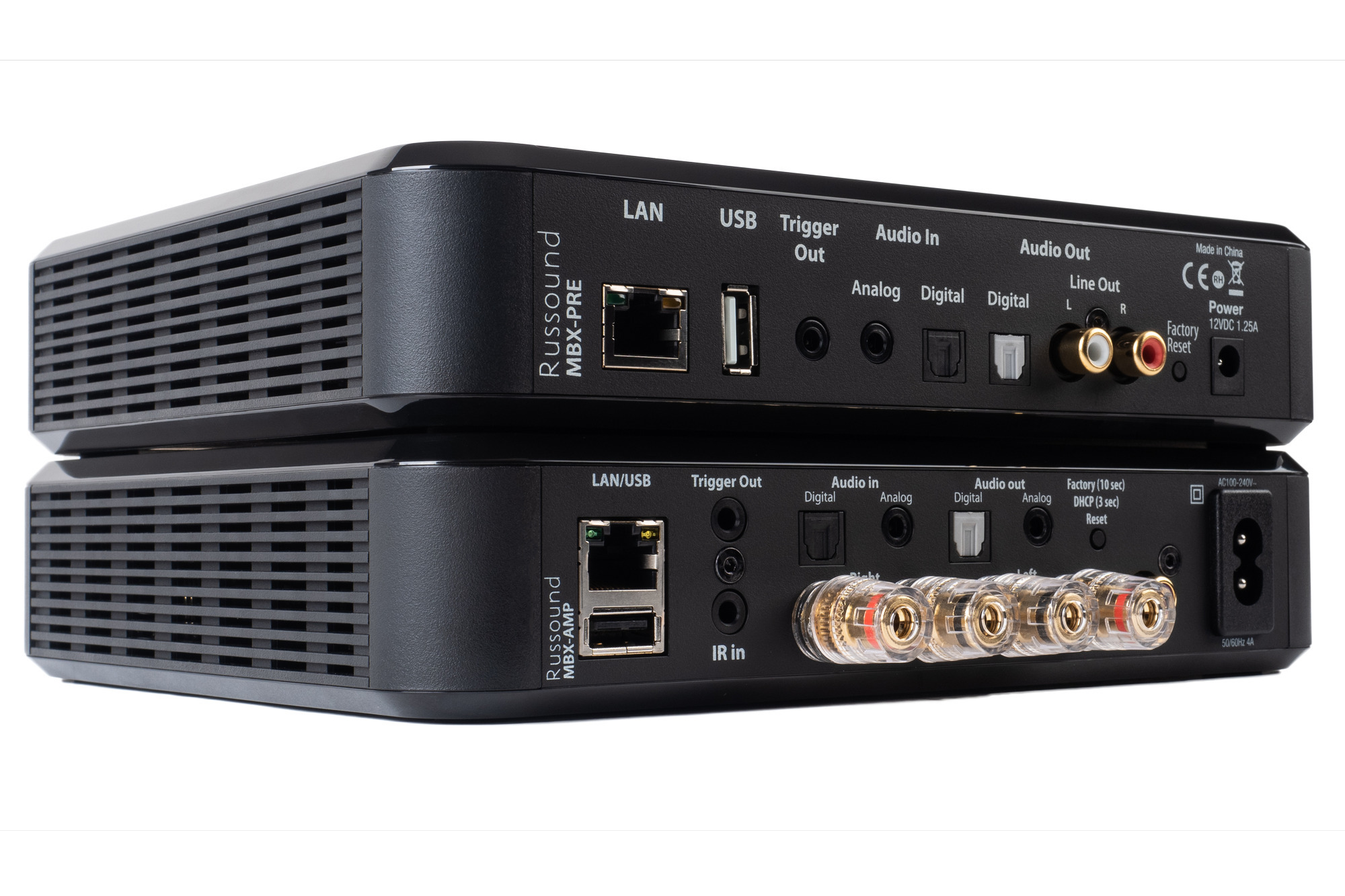 Shoot-out at the streamer corral

MBX-PRE versus Sonos Port comparisons—conducted with Tidal and Deezer-sourced FLAC content played through my Yamaha Aventage receiver and Bowers & Wilkins Nautilus speakers—were also telling. Carefully matching the variable-level analog output signals of both units, I almost invariably preferred the digital-to-analog processing going on inside the Russound.

Some might argue that FLAC Tidal sounds a tad better than FLAC Deezer (which has been shown to roll off faster above 18,000Hz.) So, I tried alternating carefully synched and volume-matched content from each service through the Russound and Sonos players. Still, the only times I ever thought the Port might have the advantage were on a handful of Steely Dan tracks where one content provider had oddly reversed the left/right channels relative to the other presentation, and the vocals popped differently.

I don’t have a NAS box with a DLNA server, but I did have success with a thumb drive of “Mountain Stage” radio shows, shared by show host Larry Groce. I plugged the drive into the USB port on the MBX-PRE on the second floor of my home, which I’d connected to a classic B&O Beocenter 9000 driving a pair of two-way bookshelf speakers from Q Acoustics. I used the MyRussound app on an iPhone and an iPad to stream this unvarnished Americana music show wirelessly to the other MBX-PRE on my first floor. 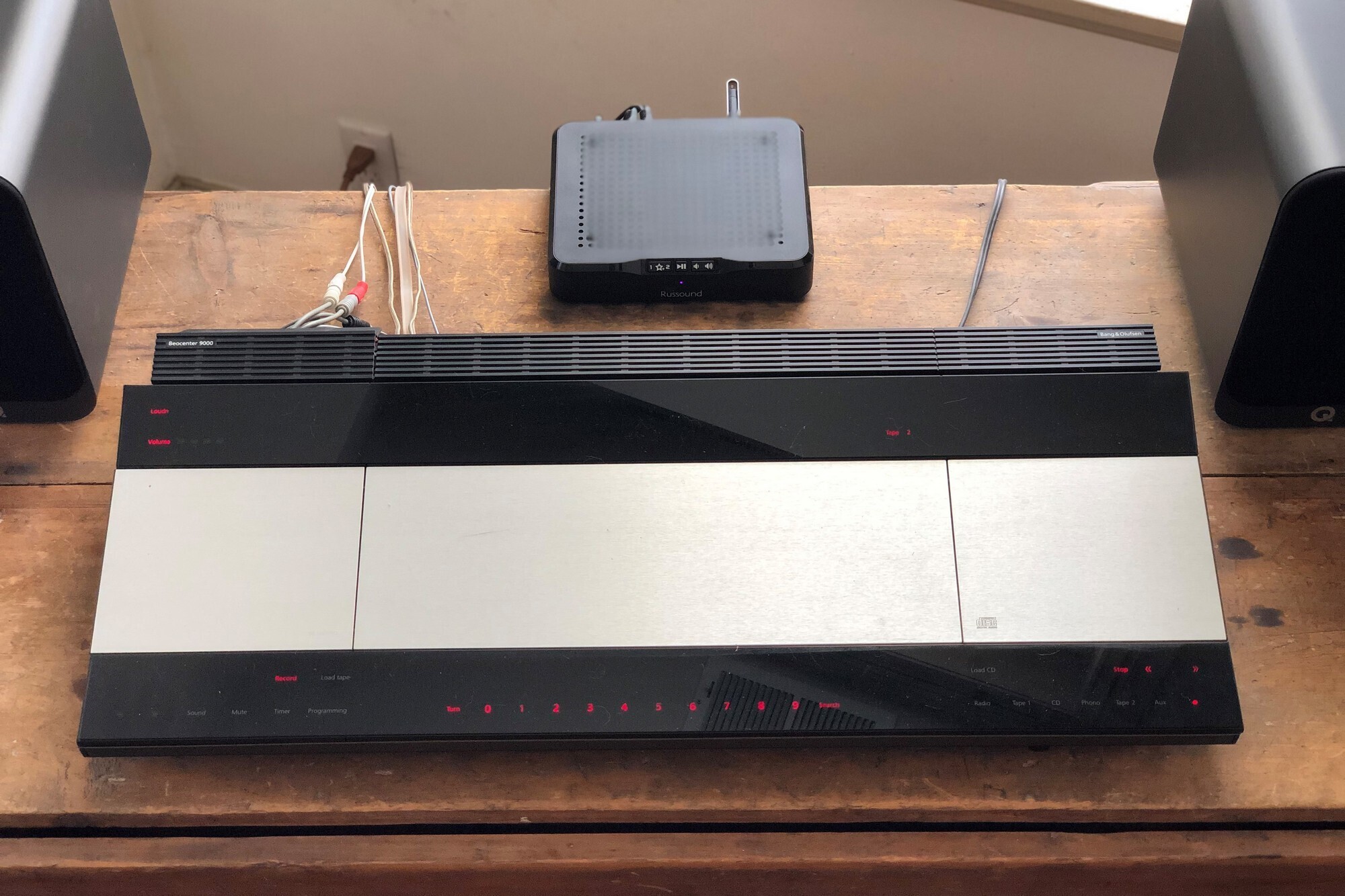 The tablet version of the app takes advantage of the bigger screen to present larger transport-control buttons and a house-shaped “home” button that can quickly pull you out of the weeds of a deep-dig internet radio station search. On the less-finessed smart phone app, the extraction process demands as many as seven left-arrow taps to get back to the main menu.

But when I first installed the devices, I also found the MyRussound app could take as long as 30 seconds to wake up and connect to them. That lag time shortened to just a couple seconds after I dished a complaint with Russound. Maybe reviewers do have a little clout? But controls are still locking up on rare occasion, remedied with reboots all around. And the team still hasn’t fixed another bother with this second-generation (on the market for about a year) streamer.

If there’s a power or internet service outage, you’ll almost certainly need to unplug and then reconnect the boxes to get them back online, after which you might be asked to re-enter the credentials for your subscription services. Don’t bury the power cord where you can’t reach it. It’s worth noting that complaints about the Sonos app have been few and far between. 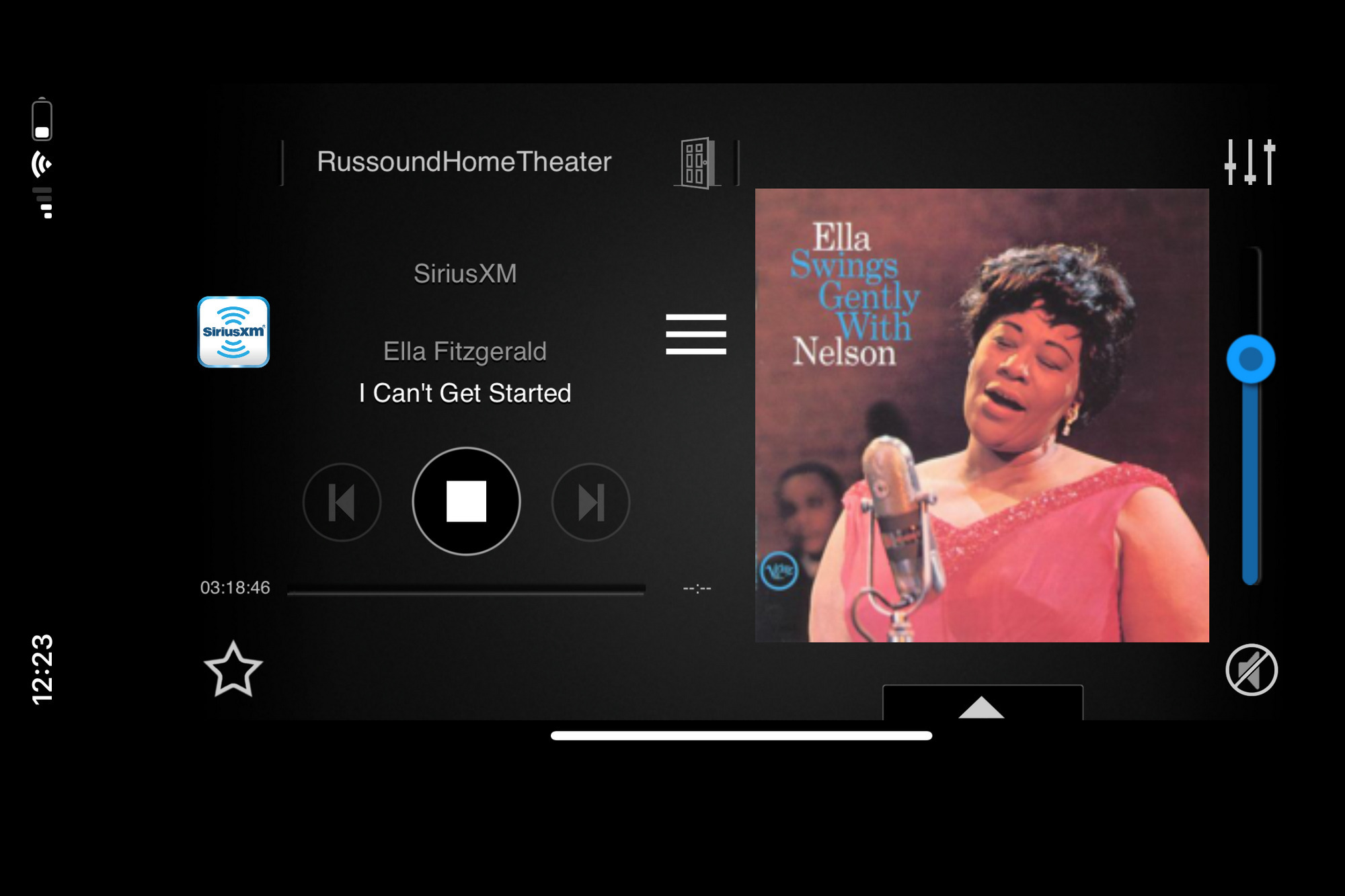 Russound and the DIYer

As I mentioned earlier, Russound sells its gear exclusively through a dealer network. If you don’t buy an MBX-PRE from a Russound-authorized dealer or distributor, you won’t be able to unlock the software needed to operate it. Nor will Russound honor the two-year parts and labor warranty on its hardware. That’s one way of maintaining quality and price control—not to mention guaranteeing dealers’ profit margins. Then again, there are a host of add-ons and accessories that can enable all sorts of sophisticated integrations, and most people probably would want to hire a pro to build out a highly customized audio system.

But Russound doesn’t want to completely alienate DIY-inclined buyers, so it lists three online retailers in its dealer network: Crutchfield, Best Buy, and—in Canada—Visions Electronics. Acquire an MBX-PRE from Crutchfield, for example, and one of its installation specialists will step you through the setup process—by email or by phone—and provide the sign-in name and password you’ll need to get started. “We don’t remotely take over your system, but if you email us smartphone pictures, we work from those to help set up and troubleshoot,” said a congenial Crutchfield phone rep named Cory. 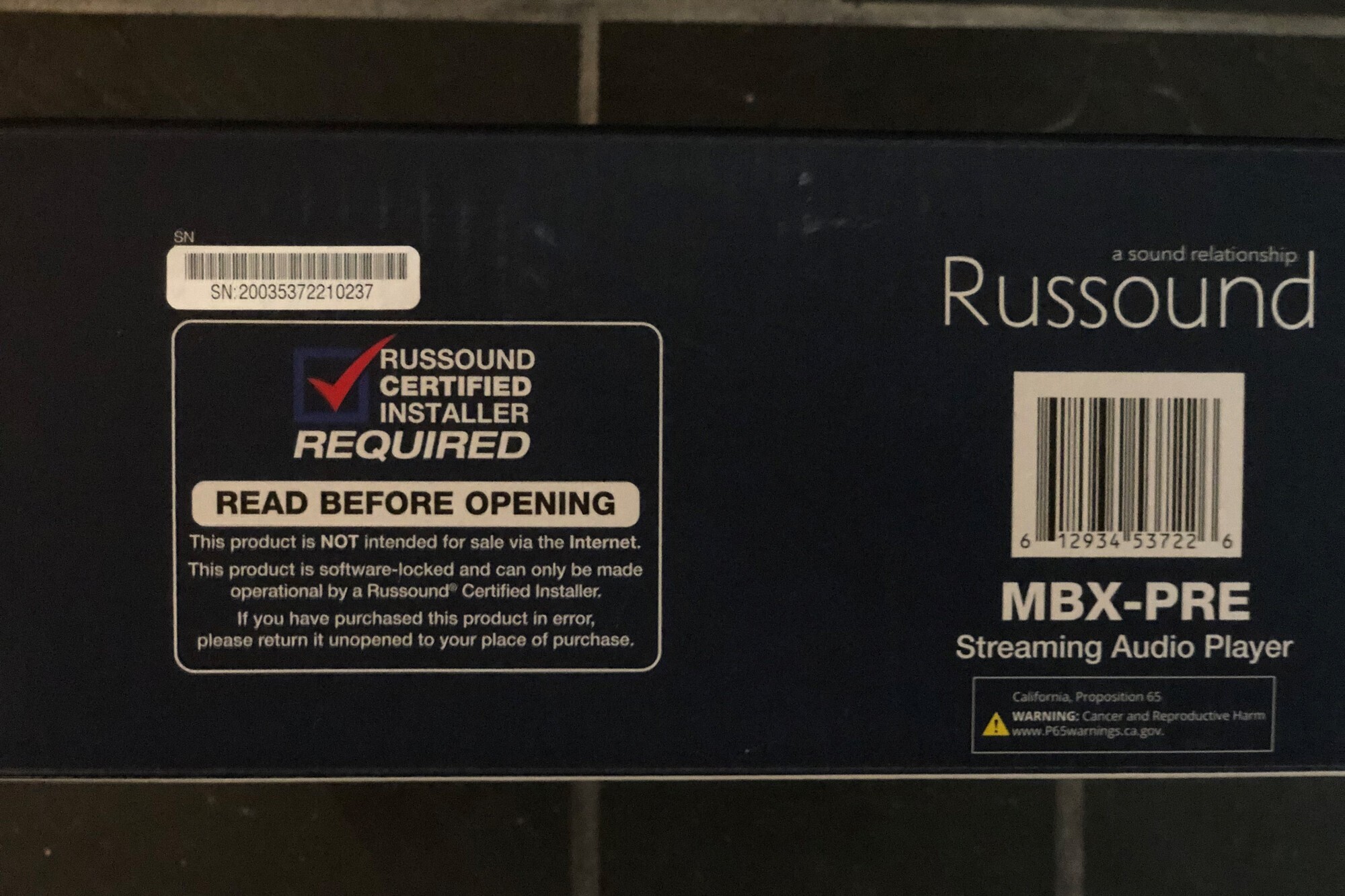 Russound also has its own product support team and online videos that help explain operations like these: Touching the three-bar icon on the home screen opens up the menu. Pressing the slide-levers icon gets you to useful tone controls and (if pressed down for three seconds) to advance settings, including cache clearing. Touch a plus sign adjacent to one device to then group it with another. Tapping the star creates a recallable favorite.

Still, the MBX-PRE is easy enough for a moderately techy person to set up and run—at least when MBX units are just playing amongst themselves and Google Cast speakers (there’s a 32-device limit). The “recommended” setup process for DIYers asks you to first engage the Google Home app on a smart device and then power on your new product. The app recognizes and welcomes your MBX-PRE into the fold on the same Wi-Fi (or ethernet-wired) home network. It also directs you (sort of) to name the speakers, and then establish them by room location and in groups, so you can then easily call up one or several by voice command or menu tap.

The front faceplate on the Russound MBX-PRE also has a few physical buttons, most self-explanatory, for volume, pause/play, Bluetooth pairing, and to establish two content pre-sets (a specific station, playlist, podcast, album, or song, for example). The only user-friendly control you’ll encounter on the Sonos Port is the one for Bluetooth linking.

If your Wi-Fi network is congested or weak, or there are too many physical obstacles between streamers (walls, appliances, etc.), you might experience quarter-note sized music gaps when sharing a stream between two or more MBX-PREs or MBX-AMPs, with those dropouts audible just on the receiving unit. The fix? Establish a hardwired ethernet connection (or do as I did and use a powerline adapter) to one unit. That eliminated 99 percent of the blips for me. I never heard any sputters over Wi-Fi when running separate streams to the two MBX-PRE’s, nor while playing tunes on just one.

Previous ArticleEcobee SmartCamera review: If you can tolerate a subscription, this security cam has more features than most
Next ArticleMarvel’s Avengers Beta to Offer Over 20 Missions, Hawkeye DLC Post-Launch
Comments (0)

Don't miss a deal at Sephora
Best offers at Groupon
Discounts, Sales and Deals at Vimeo
Save your money with Surfdome
Online-Shopping with Ancestry
Best products at O2 Mobile
Latest Posts