The Roccat ELO Air is a great introductory wireless gaming headset that performs well in almost every area. For a budget buy you could certainly do worse, and we were continually impressed by how well the headset holds its own in a competitive sector of the market.

The Roccat ELO 7.1 Air appears to hit a crowd-pleasing sweet spot in the world of gaming headsets. Not only can you experience freedom from cumbersome wires, but you can now do so with the audio quality you get with wired hardware, and at an affordable price to boot.

Everything about the Roccat ELO Air feels nicely balanced. The detachable microphone is great in comparison to mics on rival headsets that simply bend out of the way or stiffly retract into the headset, and the battery life is better than expected for the cost.

The Bluetooth compatibility is PC-only due to a USB 2.0 connection, and the hardware needs either Windows 7,8 or 10 to run, so you can’t use it with consoles.

The Roccat ELO Air sports a typical gaming aesthetic, albeit muted enough that it won’t look like you’re about to open Counter-Strike when you’re supposed to be on a work call. The Roccat logo is emblazoned on one side and provides the obligatory RGB lighting effects, although these can be switched off in the settings should you want a more professional or inconspicuous look.

You can control the RGB lighting via the Roccat Swarm software, but you won’t be able to sync with non-Roccat hardware. The headset also features Roccat AIMO (AI motion) lighting, which allows you to sync your peripherals to respond to whatever visuals are playing on your screen – which is nifty, although you won’t be able to enjoy it yourself, as you’ll be the one wearing the headset.

The headband is the increasingly popular elasticated ‘self-adjusting’ suspension strap seen on products like the Razer Nari Ultimate headset, so you won’t have to mess around with sizing – just stick it on your head and you’re good to go. The frame is also metal, which gives some assurance in terms of build quality, although we experienced some issues with ‘creaking’ noises with rapid head movement and enthusiastic walking. This may bother some folks, but it didn’t prove to be a real issue in our experience, as you can only hear this when the headset isn’t playing any audio.

The earcups are a leatherette covered memory foam and they’re satisfyingly squishy, so users who wear glasses or hearing aids shouldn’t experience any discomfort. We reviewed the Roccat ELO Air on a medium head size, so anyone with a larger head may find the fit a little tight, but a solid eight hours of wear didn’t cause us any discomfort. 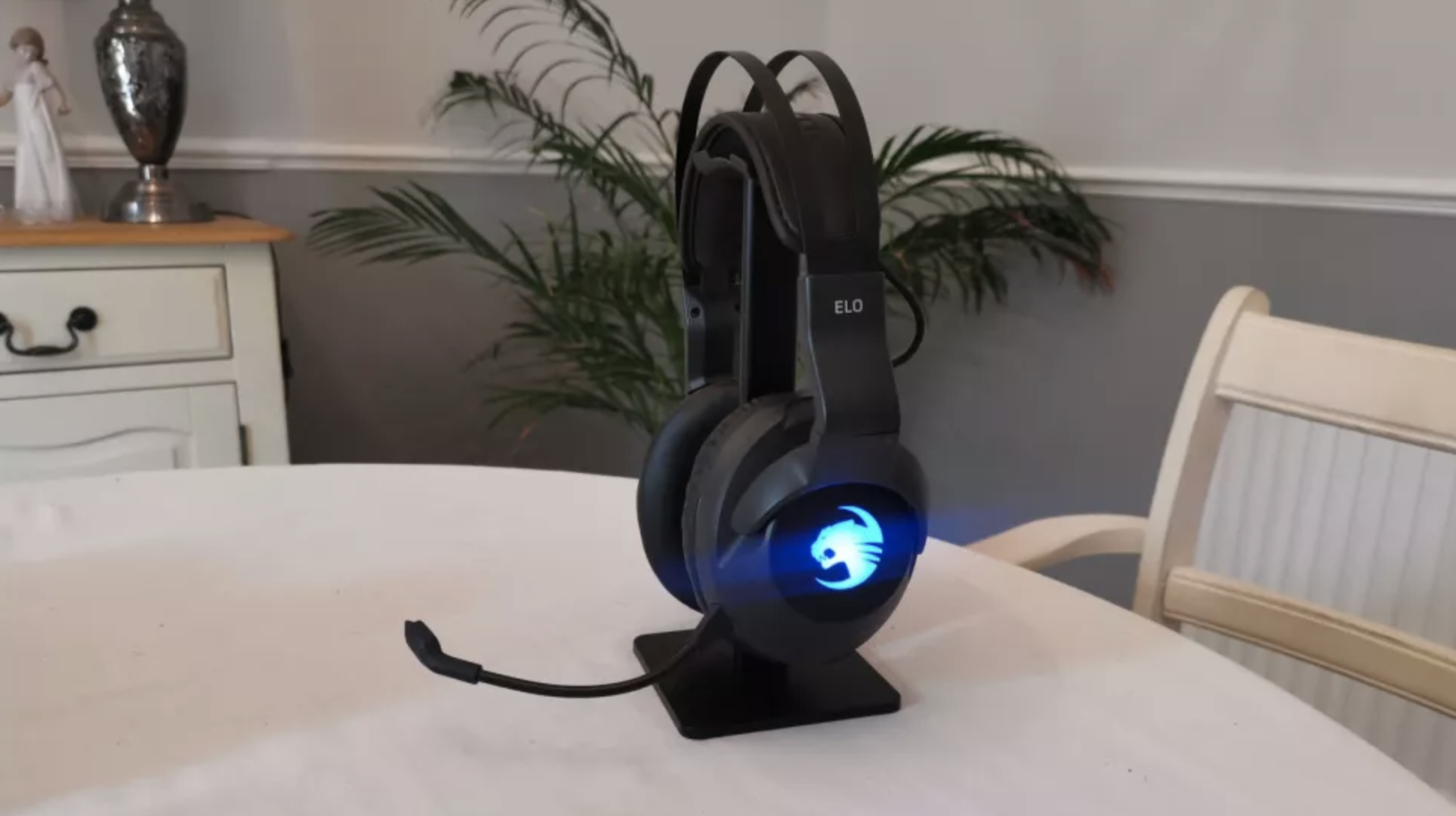 The controls on the Roccat Elo 7.1 Air are a little awkwardly arranged, with the in-game and voice-chat volume controls placed right next to each other. The buttons for mute and power are also awkwardly placed, but we found that after a few accidents it’s easy to develop some muscle memory for the control locations, so you’re not accidentally muting yourself in the team chat (lest your friends think you’re AFK).

The software for the Roccat Elo 7.1 Air has some fun settings, like the Turtle Beach ‘superhuman hearing’ feature, which, assisted by the 7.1 virtual surround sound and 50mm audio drivers, boosts in-game audio such as footsteps to allow for enhanced security against fragging and sneak shots. You can also mess around with various settings to distort your voice into monster, cartoon, male or female. The results are super-fun, and while the gendered settings aren’t entirely accurate, they can help you to hide your identity and provide some anonymity in online games should you require it. 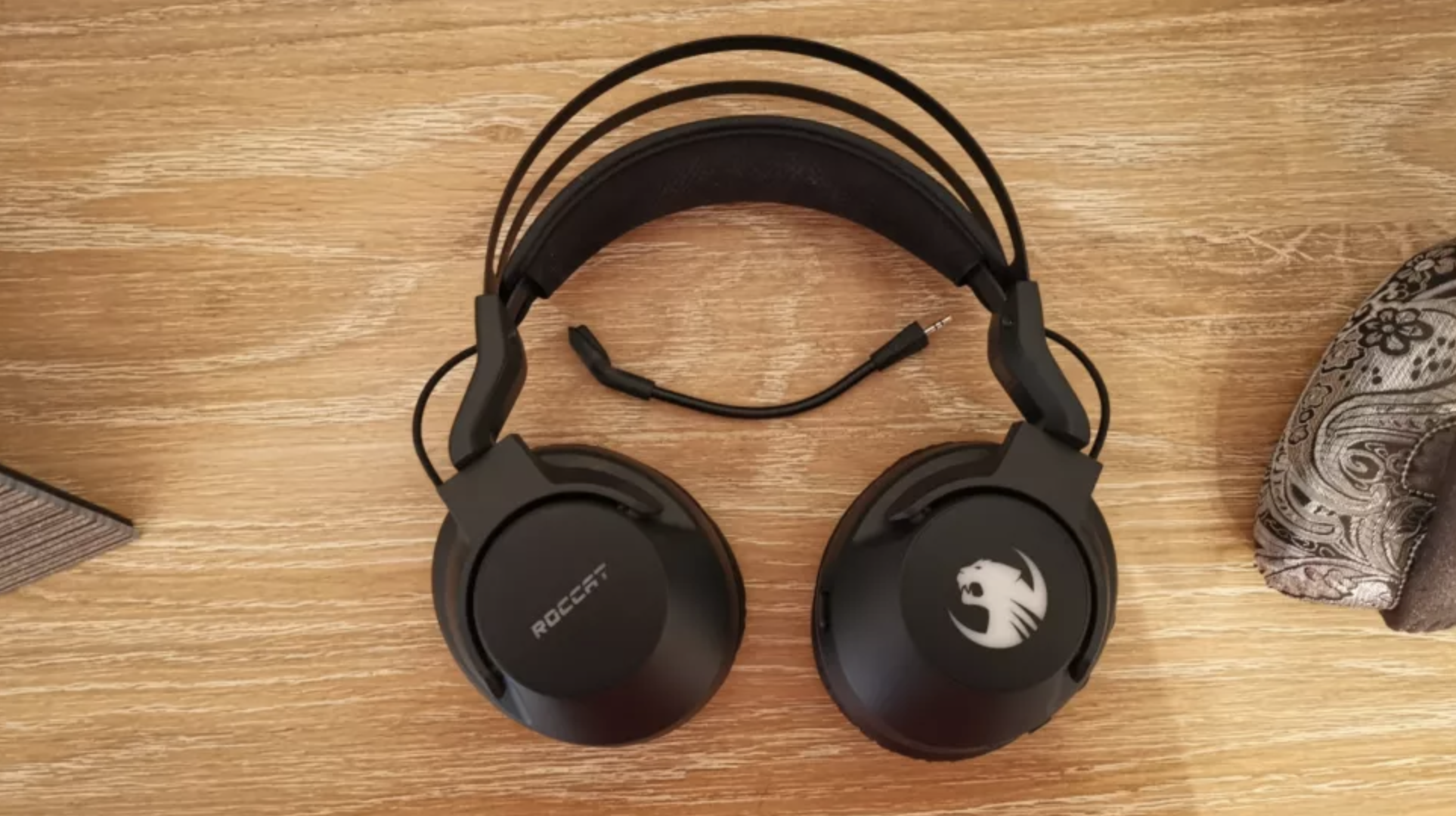 We did notice that the audio isolation isn’t as good as on some other gaming headsets that promise noise cancellation, and you’re still able to hear some muffled background sounds if you’re in a loud environment, but as you’re only going to be using the Roccat Elo 7.1 Air in the comfort of your own home this shouldn’t be a deal-breaker (unless you live somewhere particularly noisy).

The microphone quality is also surprisingly good for a headset in this price range, and features something called TrueVoice technology. This enables you to hear yourself in playback, and actually relays an accurate sample of your own voice, rather than sounding like a bizarre echo. Having the option to fully remove the mic also means that if you choose to upgrade to a USB mic in the future, you can still rock the Roccat Elo 7.1 Air headset as a set of wireless gaming headphones. 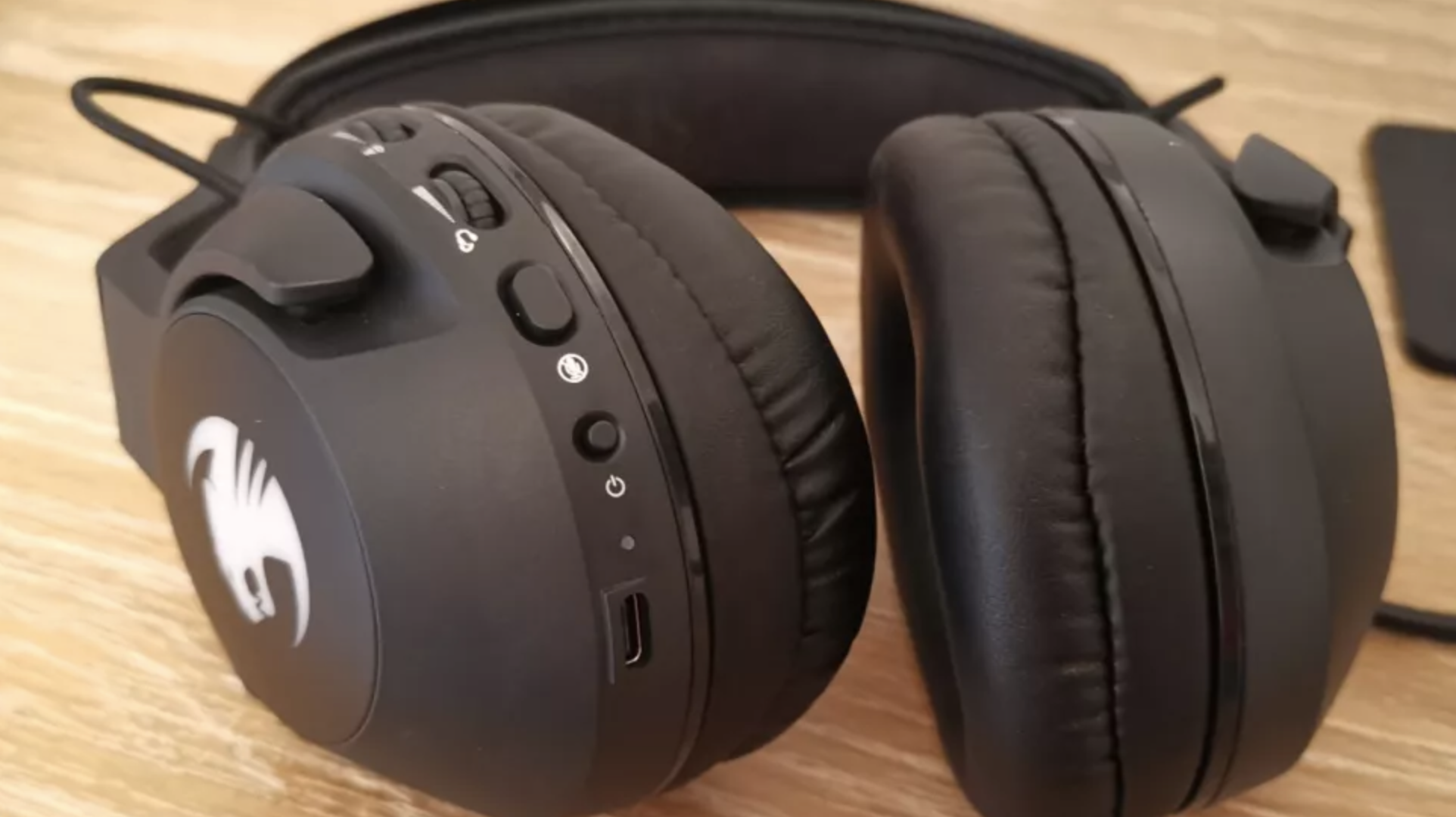 Roccat promises up to 24 hours of battery life, a claim we found to be accurate when testing the device, and even after a night flashing RGB lighting to itself when we forgot to plug it in to charge, still managed a solid few hours of gameplay. The headset charges via a standard USB-C cable, which is much faster than older micro-USB connections, so you’re likely to have one lying around if you misplace the provided cable.

The Roccat Elo 7.1 Air provides lots of small comforts, from the Roccat Swarm software for audio and lighting adjustments, to the earcup mechanism swiveling to softly rest on your collarbones when not in use. The Bluetooth range is fabulous, allowing us to walk around a house whilst maintaining audio, even when downstairs making coffee. Save for a small few issues with creaking metal and oddly placed controls, this is a fantastic buy for anyone looking to rid themselves of pesky wires during gameplay. 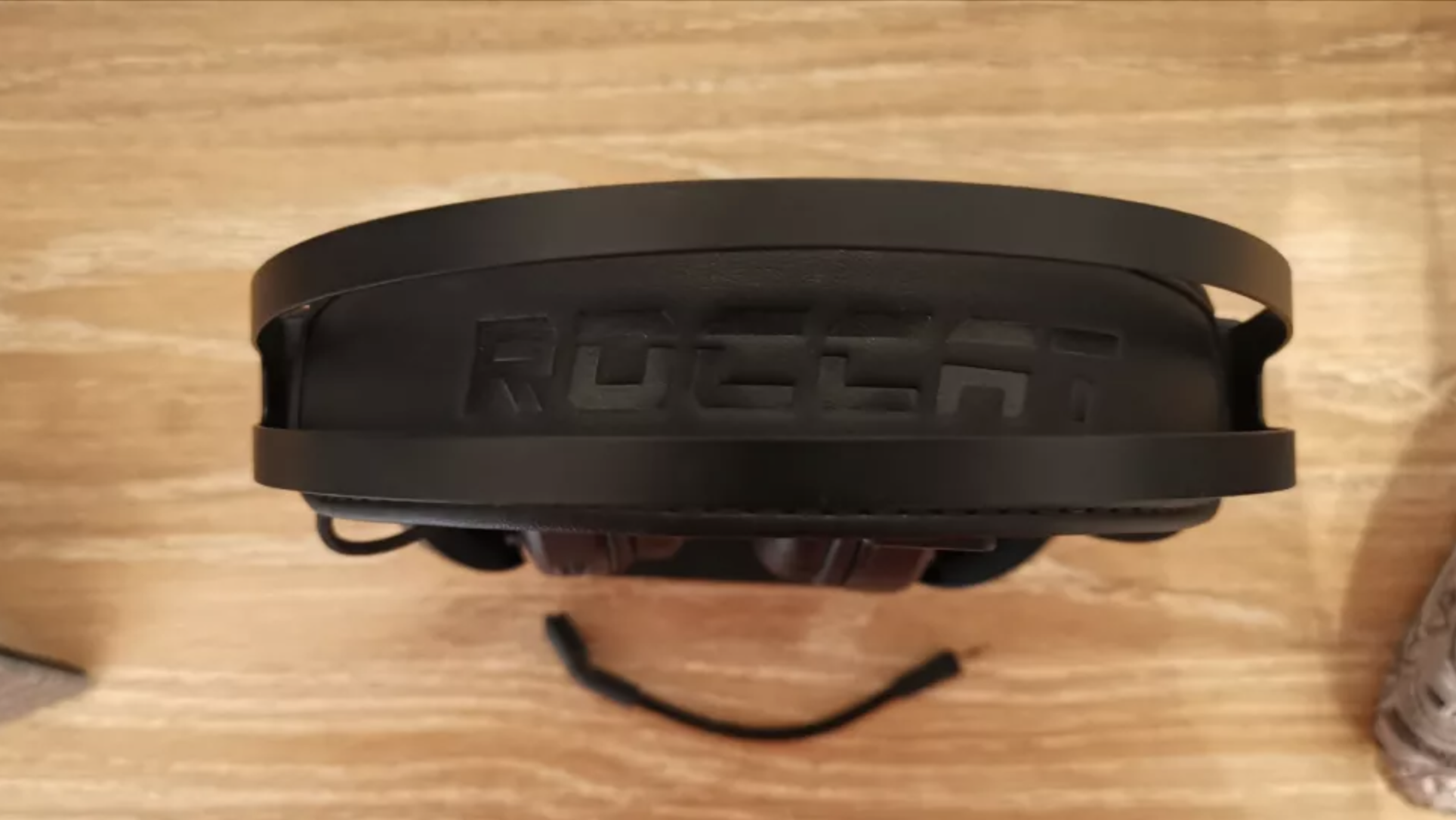 The Roccat Swarm software isn’t comprehensive, but it does offer straightforward adjustments for fine-tuning your game and mic audio. The voice settings are a riot too.

You want great quality for a low price

Who doesn’t like saving some cash? Sure, you can spend more money on other headsets, but the jump in quality will be negligible for most users.

You want a ‘low-key’ gamer aesthetic

Without the mic or RGB lighting, this headset can pass as a chunky pair of headphones; clip on the mic and fire up some rainbow lighting and you have an entirely new look.

The audio quality, and the customization options, are fantastic for the price, but if you’re sensitive to sound quality and have cash to spend, look elsewhere.

The RGB lighting is great, but unless you have an entire Roccat setup you won’t be getting a great synchronization from effects as the Roccat software doesn’t sync with other brands.

You have a larger head or wear chunky glasses

While we found the headset was still comfortable after a solid day of use, those with larger heads, or who have glasses, may find the cups pinch after a time.

Don't miss a deal at TalkTalk Phone and Broadband
Best offers at Marks and Spencer
Discounts, Sales and Deals at Farfetch
Save your money with Microsoft Store
Online-Shopping with EE Mobile
Best products at Sephora
Latest Posts