Having already planted flags in mice, keyboards, headsets, speakers, soundbars and questionably useful light-up mousepads, Razer is continuing its attempts to take over PC hardware with its first-ever desktop monitor.

Revealed at CES 2020, the Raptor 27 liberally applies many of Razer’s design staples – including Chroma RGB lighting – to a conventional yet highly specced gaming panel. The result is a display that performs well and looks superb, but relies on relatively minor features to make up for its astronomical price.

Razer Raptor 27 review: What you need to know

Considering this is Razer’s first crack at a gaming monitor, it’s been wise in targeting the generally accepted sweet spot for serious play: 2,560 x 1,440 resolution, 144Hz refresh rate, 27in in the diagonal. 1440p keeps games sharper than 1080p without the harsh performance hit of 4K, while the high refresh rate smooths out movement. The matte-finish panel also uses IPS tech, which traditionally offers better-looking colours than VA or TN at the cost of higher response time – though Razer claims the default 7ms can be lowered to 4ms with pixel overdrive enabled, and as low as 1ms with the motion blur reduction setting. 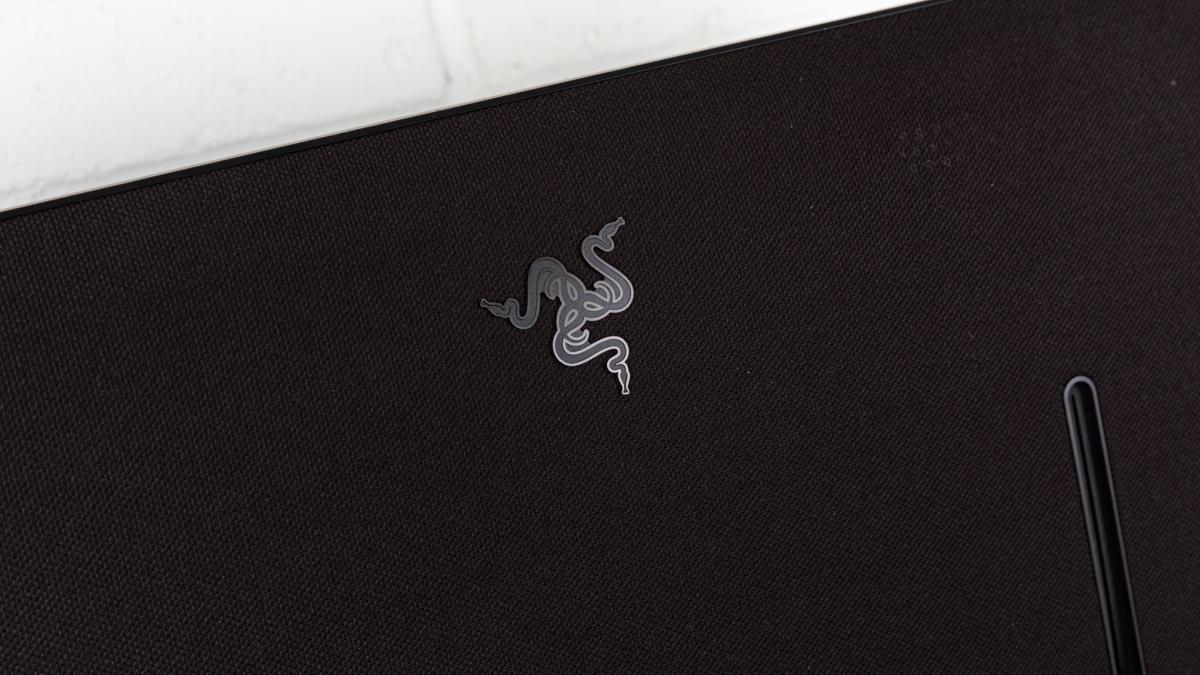 Refresh-rate syncing is also included, in the form of AMD FreeSync 2, and it’s also certified as G-Sync Compatible – so regardless of whether you own an AMD or Nvidia graphics card, you’ll be able to sync the refresh rate to the GPU output, reducing screen tear, right up to the 144fps mark.

The Raptor 27 even promises HDR support, albeit only to the lowest DisplayHDR 400 standard.

The primary excitement-dampener here is the price. At £700, the Raptor 27 is by far one of the most expensive monitors of its size, regardless of resolution.

As we’ll soon see, there are a few decent reasons to pay extra for the Raptor 27, but this combination of price and specs does put it in dangerous territory. There’s no shortage of FreeSync-enabled, 27in, 1440p, 144Hz IPS monitors that put out a great picture for far less cash: Acer alone has two, the XF270HUA and the newer, cheaper Nitro VG270UP. Then there’s the Asus MG279Q, the HDR-supporting Gigabyte Aorus AD27QD and the AOC Agon AG322QC4, which matches the Razer’s refresh rate and resolution while adding a few extra inches of screen space. If you can stretch to £549, you could also consider the Agon AG271QG; this is G-Sync only, but can be overclocked to 165Hz.

There’s tough competition, although none of these monitors are beautifully crafted as the Raptor 27. Imagine the premium feel of a Razer Blade 15 laptop, but bigger: a reassuringly heavy, matte-black aluminium stand holds the screen with outstanding sturdiness, while clean, slim bezels further maintain the modern look.

The base draws attention in any case, as it’s trimmed with customisable RGB lighting. It’s part of Razer’s Chroma system, so can be customised and synced with outer peripherals via desktop software, and since it’s actually within your field of view when gaming, it’s easier to appreciate than the RGB lighting of Razer’s mice, headphones and – yes – mousepads.

What really stands out, however, is build quality. Besides being completely wobble-free, the stand is flexible through its height and tilt adjustment (only pivot adjustment is missing); in fact, the screen can tilt backwards until it’s flat. This grants easy access to the vertically oriented ports on the rear, a position that would normally make connecting cables a pain. Here, though, you can give yourself a good view for making a connection, before resetting the screen position so the sockets are hidden again. 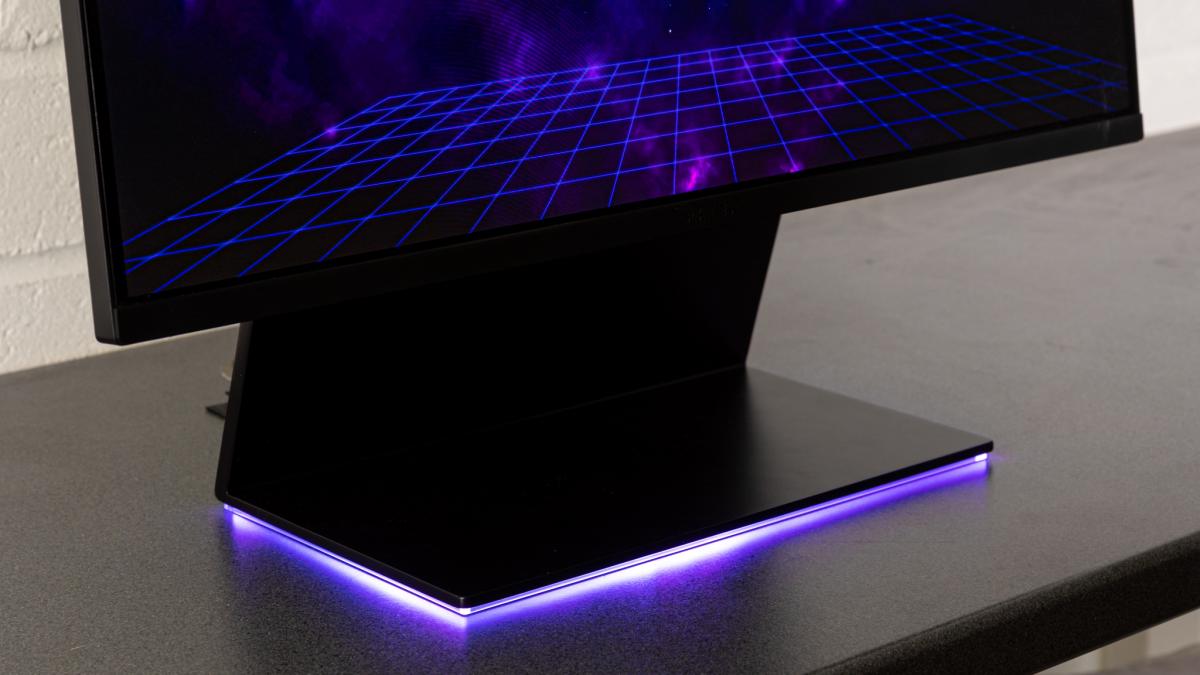 Speaking of which, the Raptor 27 is well equipped with a wide range of ports. Besides the expected HDMI 2b and DisplayPort 1.4 inputs and a 3.5mm combined mic/headphone jack, there’s also a USB Type-C port, which can carry a DisplayPort signal as well as data. If you’ve got this connected to your PC, you can also make use of two USB 2 passthrough ports. There’s one more USB 2 port, although it’s usually filled with the a connection for the Chroma lighting; you can therefore unplug this to act as an “off” switch, if you ever get bored or distracted by the glowing strips.

It’s a happily versatile mix, and the way the cables can be routed – in their own individual channels, cascading down the back of the sloping stand – looks marvellous. If Razer was trying to improve subtlety with this bit of cable-tidying, though, it probably shouldn’t have made all the bundled cables bright green.

Nevertheless, I can’t recall any other monitor with a design that so effectively blends style with practicality. Even the fabric finish on the rear of the screen is a nice touch, and while there are no speakers underneath it, that’s fine – a set of dedicated speakers are always a better investment.

There are no buttons on the Raptor 27; just a single joystick on the rear. Again, that’s fine, as navigating menus with a joystick generally feels more intuitive than having to switch between multiple buttons. A power switch would have been nice, though. 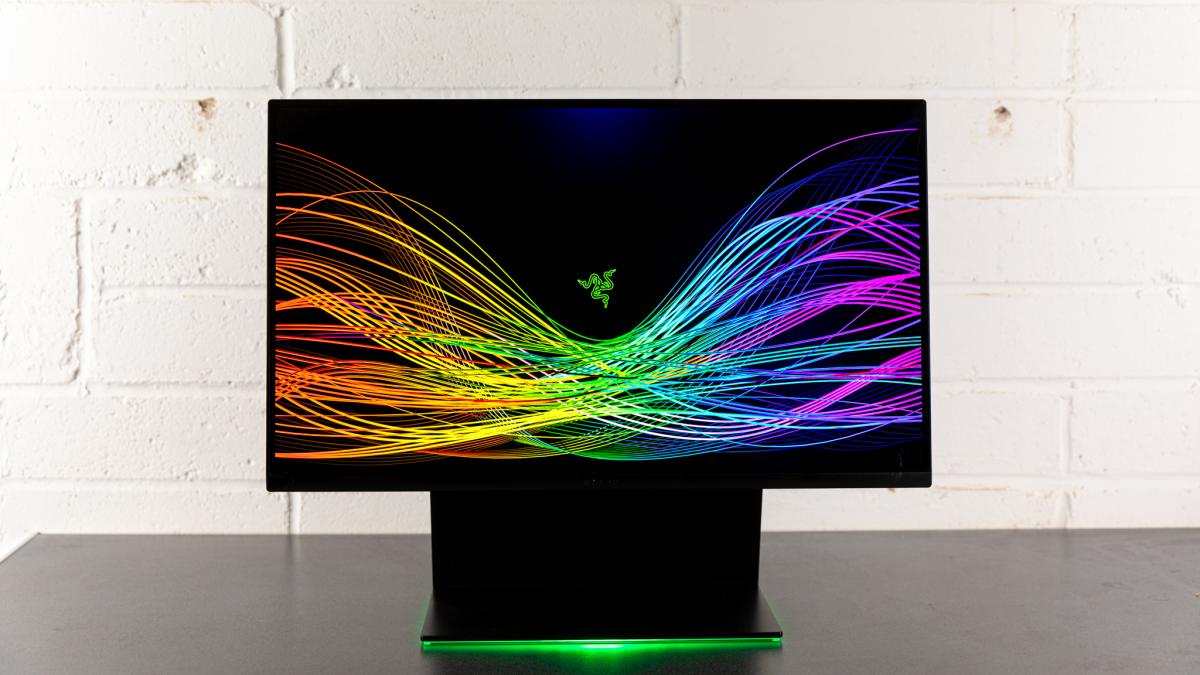 The onscreen display (OSD) is simple enough to use, while also providing a respectable selection of more complex tools. The basics, like brightness and contrast, sit alongside higher-level tweaks like a choice of colour profiles and gamma levels.

The main “Gaming” screen is where the meat of customisation lies. There are toggles for Adaptive Sync, Overdrive, Motion Blur Reduction, HDR (more on this later) and even a built-in refresh rate counter. This may not be as useful as an FPS counter for keeping an eye on performance, but it’s interesting to see how it ticks up and down when using FreeSync or G-Sync.

The overdrive feature is limited to three settings: Off, Weak and Strong – but there’s not much difference between the latter two. A tiny touch of blurring remains – so the Raptor 27 doesn’t entirely escape the drawbacks of using an IPS panel – but both settings are definitely up to the task when gaming. The Strong setting doesn’t suffer the common overdrive-induced issue of high input lag, so we were happy to leave it on.

Sadly, motion-blur reduction is best avoided. It does indeed cut blurring on very fast-moving objects, but it also drastically reduces brightness while adding some hideous strobe crosstalk – a double-image effect – on those same objects. Leaving MBR off with overdrive on sets the response time to 4ms, which is no 1ms but a lot better than the default 7ms.

With this response time and the 144Hz refresh rate, the Raptor 27 has the speed for gaming, but considering the price, it needs to ace image quality as well.

Tested with “Normal” 6500K colour profile and 100% brightness, there’s some good news immediately: sRGB coverage comes in at 99.7%, slightly higher than that of the Acer XF270HUA and on par with the Agon AG322QC4. Contrast is also very good at 1,179:1, helping to keep dark scenes readable. 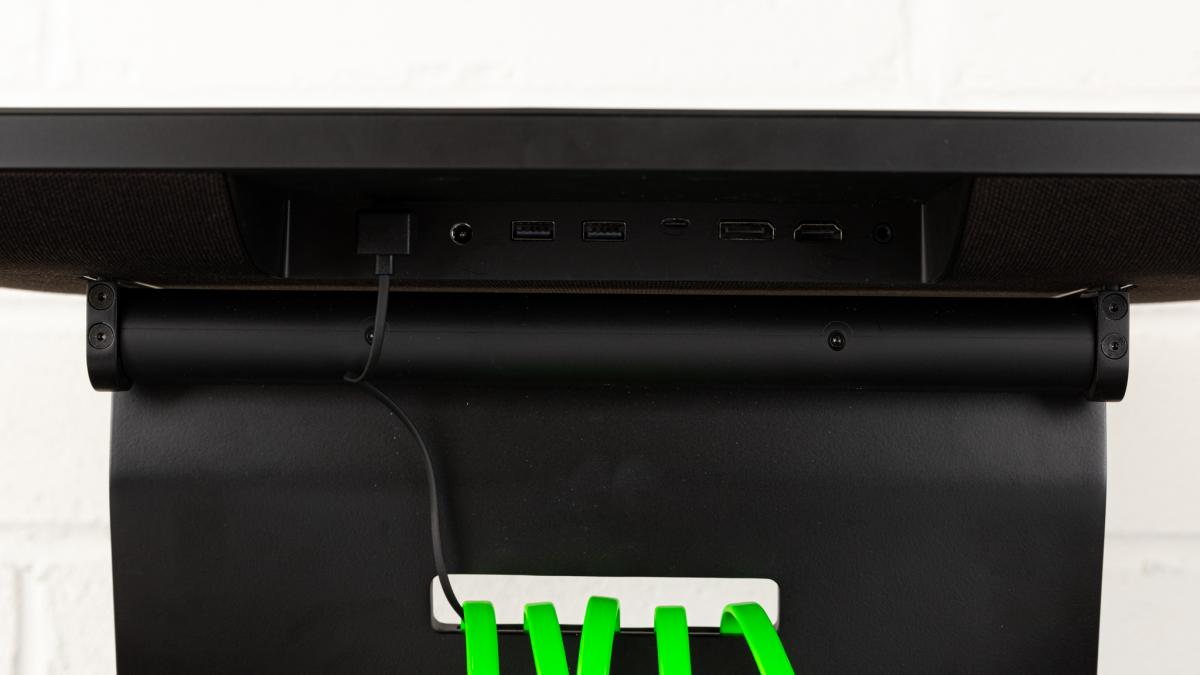 There are a couple of weak spots, however. With an average Delta E of 2.44, the Raptor 27 sits behind its peers on colour accuracy; this is a gaming monitor rather than a professional one, but the XF270HUA, Nitro VG270UP, Aorus AD27QD and Agon AG322QC4 all combined high gamut coverage with excellent accuracy. Brightness peaks at a decent 370cd/m2, though we were still thankful for the matte finish helping deal with reflections.

This is improved to 381cd/m2 by switching to the sRGB profile, which also tightens up accuracy slightly: average Delta E is still very average indeed, at 2.28, but it’s an improvement nonetheless. Contrast gets a tiny boost too, up to 1,209:1, and since the only downside is (ironically) an almost meaninglessly small drop in gamut coverage to 99.5%, it’s the profile we’d recommend.

You might have noticed that none of these peak brightness figures reach the 400cd/m2 required for DisplayHDR 400 certification. That’s because HDR mode needs to be manually activated from the OSD, and doing so negates your ability to make further brightness or colour profile changes.

There is some debate as to whether this particular standard constitutes “true” HDR, and it’s worth noting that the Raptor 27 uses edge-lit backlighting rather than full array local dimming (FALD). Even so, it fulfills what Razer promises: with HDR mode engaged the Raptor 27 can shoot up to 476cd/m2, well past the 400cd/m2 minimum of its chosen standard.

This only occurs in specifically HDR-supportive content; on the desktop and in non-HDR games, you’re looking at a 365cd/m2 peak, lower than when using the sRGB profile with 100% brightness. When it actually does come into play, though, HDR looks nicely bright, bold and punchy, with an appropriately low black level of 0.087cd/m2.

It’s a potent augmentation to the Raptor 27’s imperfect but accomplished picture quality. And, although the Aorus AD27QD still heavily undercuts it, HDR makes for a fairly compelling reason to choose the Raptor 27 over its more numerous and even cheaper HDR-less rivals.

That’s not even to mention screen syncing, which worked very well with a GeForce GTX 1060 despite AMD FreeSync being the true native technology, or how the panel manages to cover an impressive 93.8% of the wider DCI-P3 colour gamut.

Brightness uniformity is pretty good too. The absolute worst it gets is only -10% in the top-right corner, with -8% in the top left; in the middle and towards the bottom, it’s all relatively even.

Performance is king on gaming hardware, and on these grounds the Raptor 27 is an assured debut: it’s responsive and colourful, avoiding the biggest pitfalls of an IPS panel while taking advantage of what the tech does best. HDR, even in this limited state, also gives it an edge over older 1440p/144Hz/27in/Freesync monitors – and a much-needed one, too.

That said, spending £700 on a monitor with these specs requires either an outrageously inflated bank account or an outrageously inflated sense of bravado. The idea is clearly that HDR, the clever stand, the cable-management system and the RGB lighting take the Raptor 27 a level above the usual gaming fare, and it does – just not the extent that spending an extra £300-odd seems like a canny investment.

Don't miss a deal at TalkTalk Phone and Broadband
Best offers at Surfdome
Discounts, Sales and Deals at Ticketmaster UK
Save your money with Virgin Media
Online-Shopping with Bodybuilding
Best products at Turbo Tax
Latest Posts