The Razer Kraken Ultimate is not new, but “new.” What I mean is, Razer’s latest flagship headset is a sizable upgrade over 2016’s Razer Kraken V2, the last proper iteration of the Kraken line. But the Kraken Ultimate’s tentpole features—THX Spatial Audio, better volume controls, cooling gel—debuted with 2018’s esports spin-off, the Kraken Tournament Edition.

Thus the Kraken Ultimate mostly brings the consumer edition up to parity with the competitive edition. And that’s undoubtedly necessary, but not exactly jump-out-of-your-seat exciting for a product labeled “Ultimate.” I thought there’d be more to it.

Still, it’s nice to have everything in one simple, elegant package, yeah?

That’s really the Kraken Ultimate’s raison d’être. The Kraken Tournament Edition is, as I wrote in our review, “a weird proposition.” Sure, it added a bunch of long-requested features to the Kraken line, but it felt cobbled together from spare parts. Redundant controls, a ridiculously long cable with options for both 3.5mm and USB connections, a desk-mounted control box—it made good on the Tournament Edition name, but was hard to imagine using in a home environment.

The Kraken Ultimate is much more refined, the true heir to the Kraken V2. It has a singular purpose, a PC-centric headset with a standard two-meter cable and USB terminus. Easy. 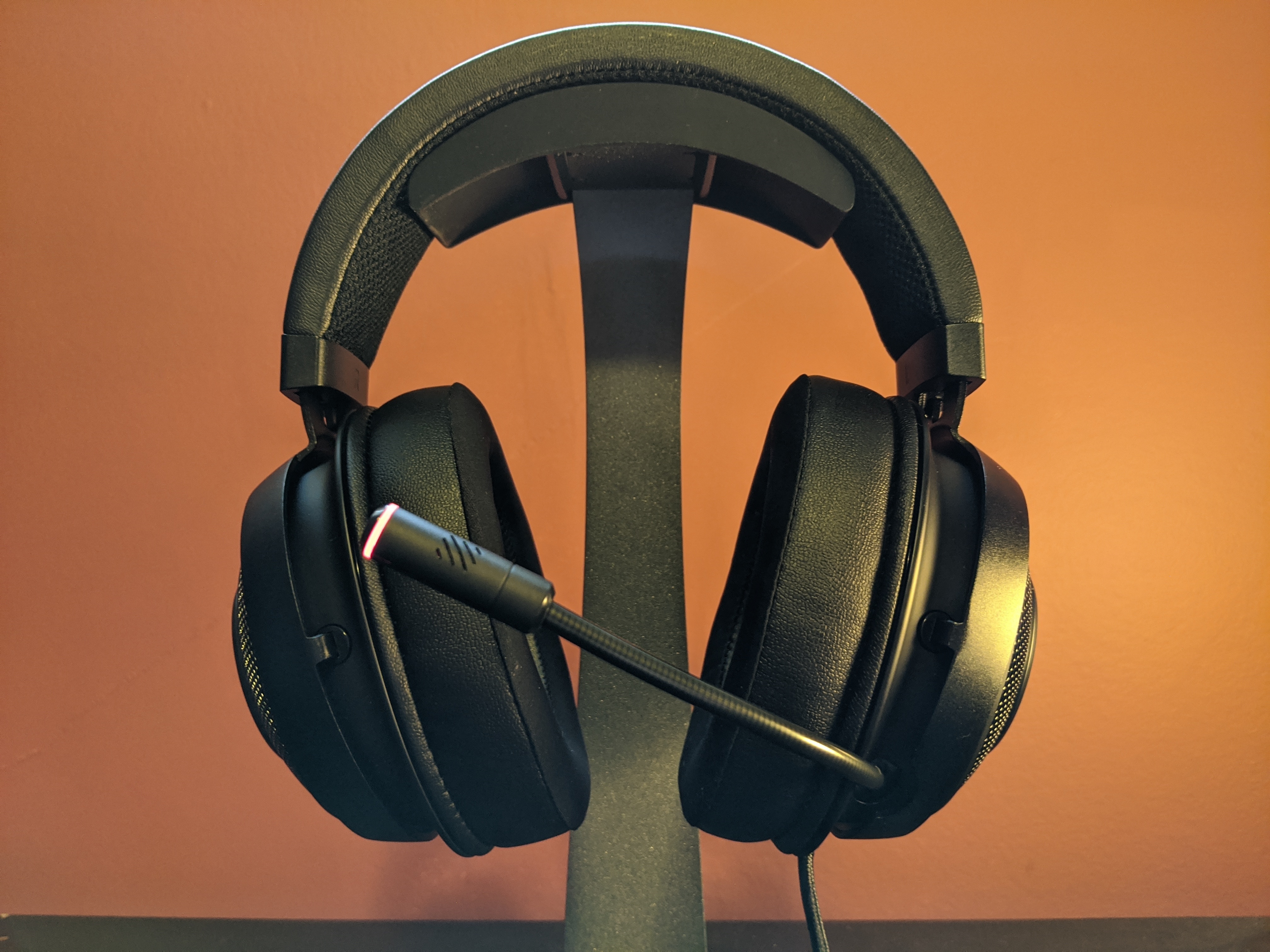 And outwardly, not much has changed in the last three years. No surprise, as Razer completely redesigned the Kraken line with the V2. It’s not time for another overhaul yet. Still, I’m a little disappointed. The Kraken—like all of Razer’s headsets—is bulky, sporting what I referred to as the “Princess Leia side-bun look” in our V2 review.

The bulk serves a purpose, in that it’s mostly padding. There’s a solid inch of foam on each ear and nearly as much on the headband, and the Kraken Ultimate is damn comfortable as a result. I think I’ve used the word “pillowy” in the past. But there’s no avoiding the fact it makes the wearer look ridiculous, even for a gaming headset. Other headsets have done more with less.

Apart from the silhouette, the Kraken Ultimate is an attractive device. The combination of black leatherette and black aluminum is still a huge improvement over the cheap toy-like Krakens that Razer made prior to 2016.

This being Razer, the Kraken Ultimate also adds more RGB lighting. When I first pulled a Kraken V2 from the box, I assumed the perforated grill on each ear would light up. That wasn’t the case then, but it is now. The Kraken Ultimate features what Razer calls “underglow,” but that’s just a fancy way of saying that the whole ear lights up now. I’m surprised it took this long, honestly. 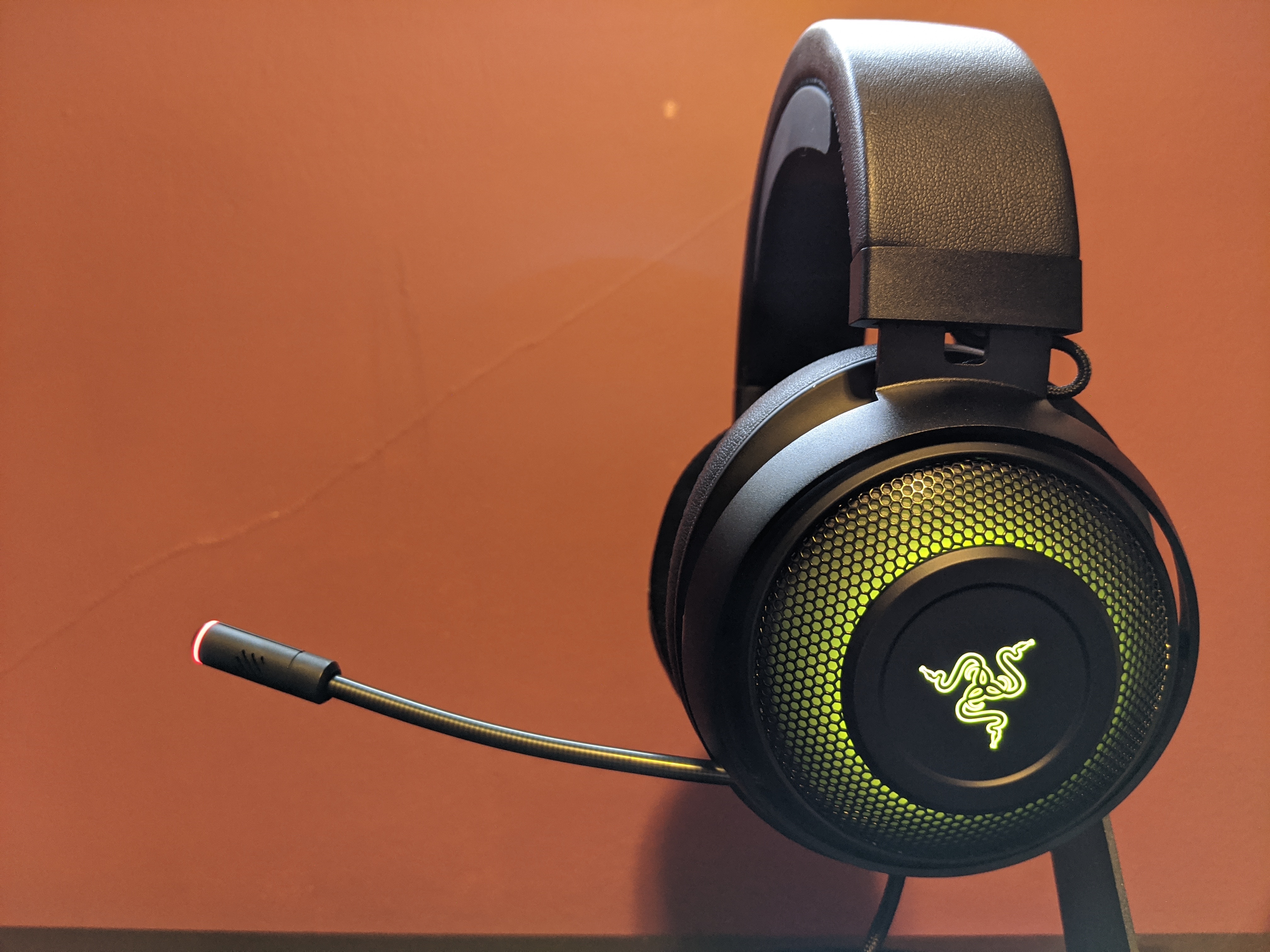 Inside the ears is another change: cooling gel. First seen on the Nari Ultimate, Razer’s gel-infused earpads help mitigate heat buildup—for a while, at least. The cooling effect only actually lasts for 20 minutes or so, after which the Kraken Ultimate functions about the same as any other headset. But hey, it’s refreshing when you first don the headset, and staving off heat for 20 minutes is useful for short-burst gaming sessions. (Per usual, you can put the gel pads in the fridge to increase the duration of the cooling effect.)

The most important addition though—and no, I’m not being sarcastic—is that Razer added a built-in volume knob. That’s the Kraken Ultimate’s biggest selling point, in my opinion. The Kraken V2 had no volume controls at all. The Tournament Edition did, but they were relegated to the aforementioned control box, a clumsy solution. But the Kraken Ultimate? The Kraken Ultimate integrates a volume wheel into the back of the left ear, and one that automatically adjusts the volume at the OS level. Finally.

It’s the Kraken Ultimate’s one major design change—but sometimes you only need one.

I had high hopes donning the Kraken Ultimate for the first time. Razer made a big deal about the “custom-tuned” 50mm drivers, and having been disappointed by the Kraken’s sound in the past I was ready for a change. 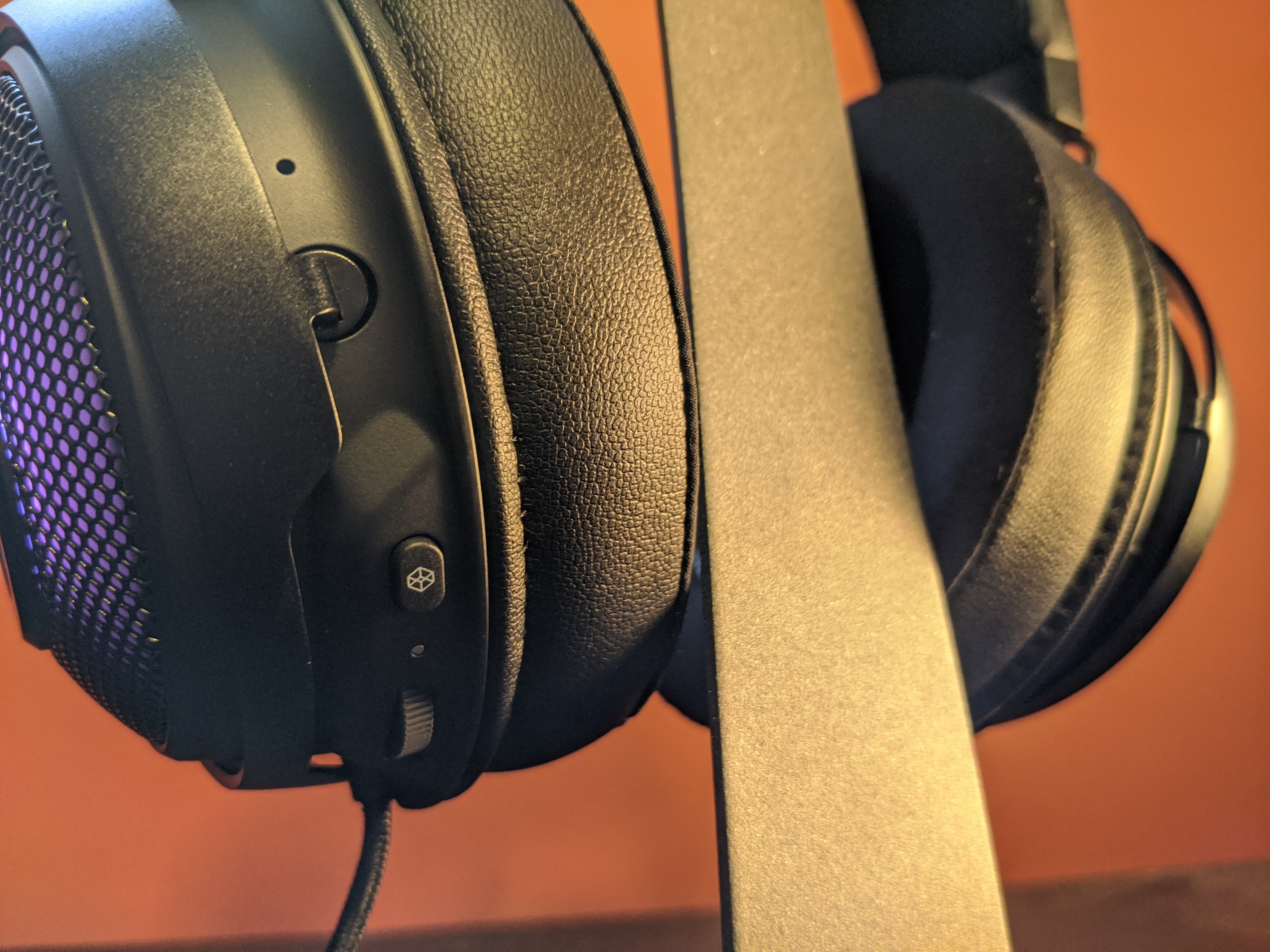 There are a few issues, to my ears. First and foremost is a sort-of muffled quality to music listening. Razer’s stereo mix sounds small by modern standards—like headphones, not speakers—which leaves instruments jumbled atop one another. The problem is less noticeable in games as there are typically fewer noise sources occurring at any given moment, but I assume you won’t use the Kraken Ultimate for games 100 percent of the time.

The Kraken Ultimate also leans heavily on the upper-mids and treble range. This is Razer’s preferred sound, and it does make footsteps, gunshots, and other tactical noises pop. It’s harsh after a few hours though, and softening the sound by adding more bass only gets you so far. Yes, doing so gets you a better headset, but still not a great headset.

Razer’s saving grace is that it has one of the better software-driven surrounds in the business. Again, either a lot has changed or nothing has, depending on your frame of reference. The Kraken V2 was released right after Razer’s acquisition of THX, and thus relied on a generic 7.1 profile for surround sound. Last year’s Tournament Edition added support for THX Spatial Audio though, and the Kraken Ultimate makes it official by including a toggle button above the volume wheel.

THX Spatial Audio is still no replacement for a proper 7.1 system, but it sounds pretty decent in Battlefield V and such. I don’t use it much, but I do love that Synapse allows me to specify which programs should activate surround and which should remain stereo. Spotify? Always stereo. Games? Probably THX. It’s seamless, which is great because I hate how most headsets require me to manually toggle it on and off. Usually that means I forget it exists. 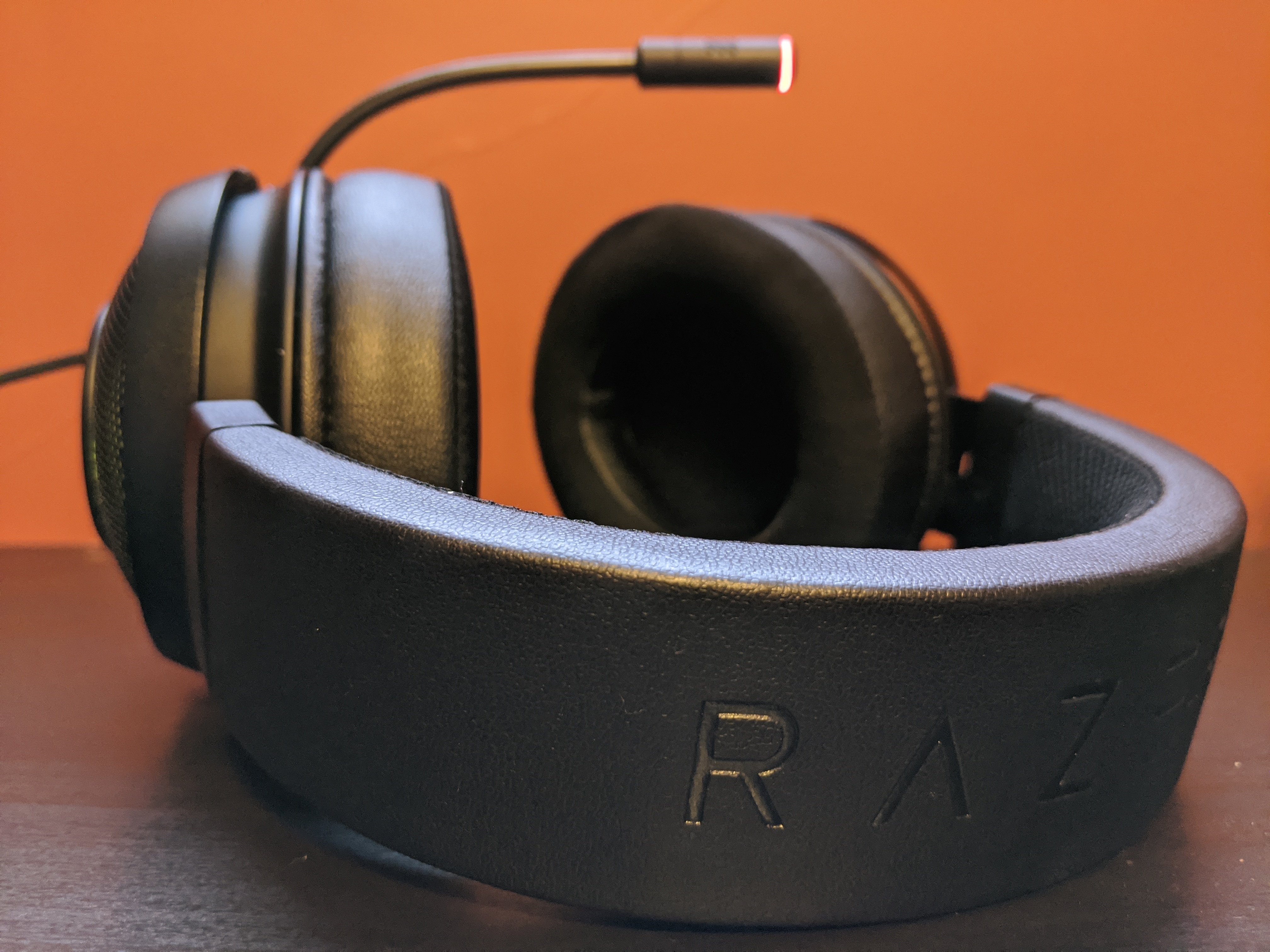 Lastly, the microphone. As far as I can tell it’s the same slinky boom mic used by the Kraken V2 and Tournament Edition, and it’s fine. I like that the mute function is on the mic itself, but the bar’s been raised in recent years by so-called “broadcast quality” microphones like that found on Corsair’s Virtuoso RGB. Razer’s is disappointing by comparison—but hey, it works, and the Kraken Ultimate is only $130. You can’t have everything at that price.

I think Razer needs to work on the Kraken’s sound though. Like, really work on it. The Kraken’s seen incremental improvements to audio fidelity over the years, but never enough to compete with the frontrunners. And sure, people like Razer. They like the brand. They presumably like the Kraken. But when you can get a HyperX Cloud Alpha for under $100 or a Logitech G Pro X for the same $130 price as the Kraken Ultimate, why would you opt for the one that sounds worse? You wouldn’t—or at least you shouldn’t.

The Kraken Ultimate looks pretty good, sounds pretty good, and is priced pretty good. It shouldn’t be your first choice, but you can’t go wrong with it either.

Don't miss a deal at Ancestry
Best offers at Currys
Discounts, Sales and Deals at Groupon
Save your money with TalkTalk Phone and Broadband
Online-Shopping with Udemy
Best products at O2 Mobile
Latest Posts