Raspberry Pi 4 review: The most powerful Pi ever stakes its claim on the mainstream desktop

Not a serious desktop replacement

I won’t lie. When I heard that the Raspberry Pi 4 Model B would – according to its creators – deliver “desktop performance comparable to entry-level x86 PC systems”, I experienced a frisson of nerdy excitement.

The Raspberry Pi’s lightweight design has tended to restrict it to hobbyist projects and IoT roles, rather than primary desktop or home server duties but the Raspberry Pi 4 Model B is arguably the most significant upgrade in the platform’s history. Could the humble Pi really be about to conquer the desktop?

Raspberry Pi 4 review: What you need to know

The Raspberry Pi 4 Model B is, physically, almost identical to last year’s Pi 3 Model B+, but the hardware has been updated in several ways. In place of the old HDMI socket it now sports twin micro-HDMI ports, capable of driving a pair of 4K displays at 60Hz. The power socket has also been upgraded, to a modern USB Type-C connector and two of the four USB ports now support SuperSpeed USB 3. 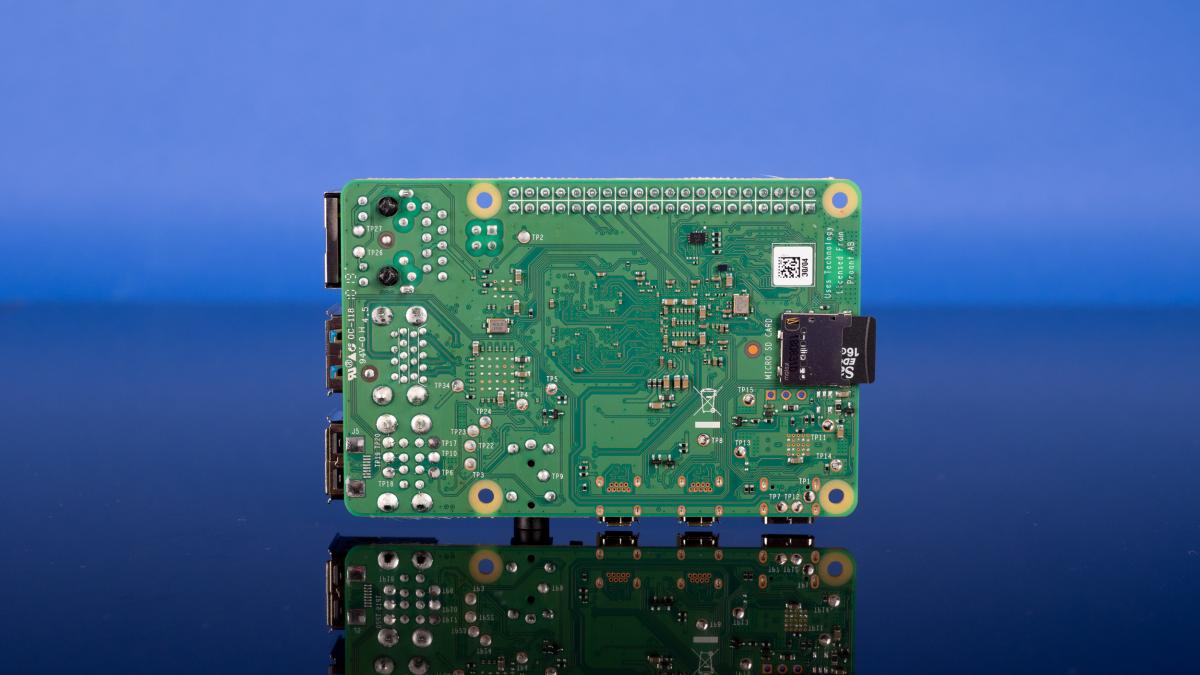 Inside, the Pi 4 gets a more powerful CPU and, while 1GB of RAM remains the default, for the first time you can optionally specify 2GB or even 4GB of RAM. All told, it’s a package that addresses many of the limitations of previous Pi hardware.

The standard Raspberry Pi 4 comes with 1GB of RAM and costs the same as the Raspberry Pi 3 Model B+, which means you can expect to pay around £34 for the bare board. The 2GB and 4GB versions should come in at around £44 and £54 respectively.

If you don’t need all the power of the new Pi, the cut-down Raspberry Pi 3 Model A+ is still available for just £23. No doubt this will be replaced by a Raspberry Pi 4 Model A at some point but, if previous releases are any guide, that might not happen until the other side of Christmas.

Even dinkier alternatives include the Raspberry Pi Zero WH and the nostalgic BBC micro:bit, both available online for less than £20. Or, more powerful contenders include the Asus Tinker Board (yours for £60 with 2GB of RAM) and the beefy Intel-based Udoo X86 II, which can be had with 4GB of onboard memory for around £230.

One glance and there’s no doubt about it: this is a Raspberry Pi. It comes as a bare board, retaining the familiar 85.6 x 56.5mm form factor, the platform’s signature 40-pin GPIO connector and a microSD card slot for system storage.

But it’s far from a case of same old, same old. For a start, the Raspberry Pi 4 Model B, at last, brings SuperSpeed USB to the Raspberry Pi platform. Its two USB 3 ports are limited to 5Gbits/sec but that’s still an order of magnitude quicker than the legacy USB 2 ports that sit next to them.

The built-in Bluetooth module, meanwhile, has been upgraded from version 4.2 to version 5; the dual-band 802.11ac Wi-Fi controller remains unchanged, but the Gigabit Ethernet connection is no longer capped at 300Mbits/sec, as in the previous generation, and can now send and receive data at a full 1,000Mbits/sec. In combination with the arrival of USB 3, this opens new possibilities for using the Pi as a networked storage host. 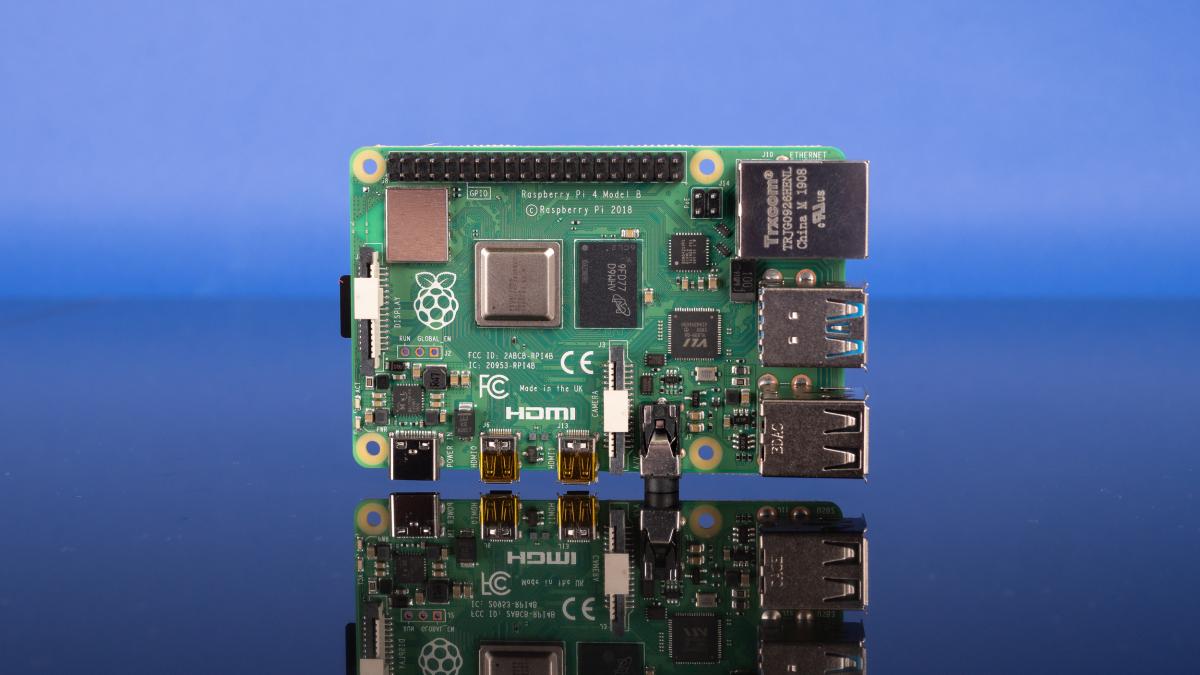 A few other tweaks mean that the new Pi won’t work perfectly with cases and accessories designed for older models, but we the changes are worth it. For one, the arrival of twin micro-HDMI ports, in place of the old full-size HDMI connector, means you might need to invest in a new cable but it also means you can now effortlessly set up a dual-display configuration, with resolutions up to 4K at 60Hz supported.

The micro-USB power connector has been replaced too, by a USB Type-C socket. That’s a good call, as the older port is no longer conveniently universal and it should be easier to find a Type-C power supply with enough juice to keep the Raspberry Pi 4 Model B running at full speed.

That brings us to the core upgrade. The Pi 4’s 1.5GHz Broadcom BCM2711 processor might not sound like a huge step up from the last generation’s 1.4GHz BCM2837, but clock speeds don’t tell the whole story. The older model was based on the mid-range ARM Cortex A53 microarchitecture, while the new one uses an A72 design that’s optimised for performance.

This gives the Raspberry Pi 4 Model B a substantial speed boost over previous models, as we’ll see below. It also means you get a more powerful GPU than ever before, which supports OpenGL ES 3 graphics (up from the older ES 2 standard), and gains the ability to decode 4K H.265 video at 60fps, on top of the older Pi’s support for decoding and encoding H.264 streams.

To top it all off, the additional RAM options provide headroom for bigger, more demanding tasks – although note that the memory modules are soldered onto the board, so you can’t start small and upgrade later. 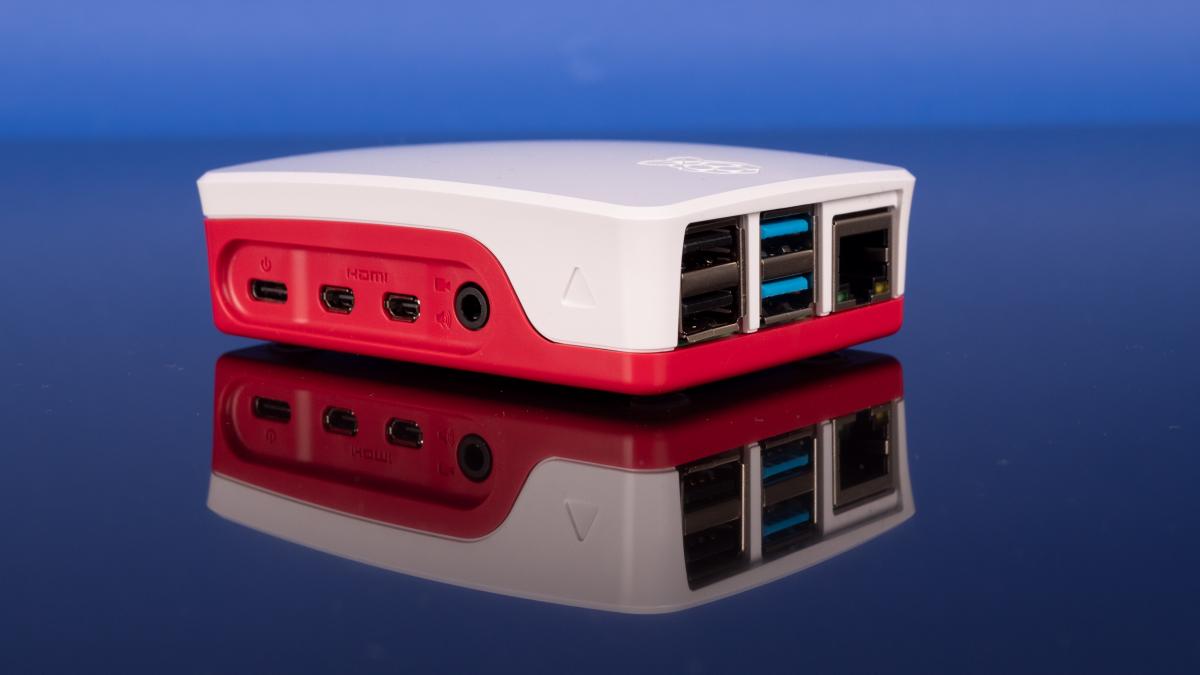 The Raspberry Pi 4 Model B is certainly faster than its predecessors; the latest synthetic benchmarks show major improvements in almost every type of operation. It’s a much bigger step up than the previous progression, from the Raspberry Pi 3 Model B to the B+.

So far, so good. However, as I’ve mentioned, this upgrade isn’t just about number-crunching. The Raspberry Pi Foundation has been talking up the Raspberry Pi 4’s potential as a general-purpose desktop and, so, alongside our usual set of tests, I also tried running our standard desktop benchmarks, using the native versions of ImageMagick, Handbrake and VLC that are included with the latest release of Raspbian.

Here the results weren’t entirely encouraging. While the Raspberry Pi 4’s CPU has its strengths, the system as a whole clearly isn’t designed for chewing through large datasets. The Pi 4 scored just 4.9 in the image-editing test, 8.3 in the video-editing test and 7 in the multitasking test, for an overall score of 7. To put that into context, our baseline PC (a Core i5-4670K desktop) processed our folder full of images in 1min 44secs, while the Pi took around 35 minutes.

These results come with a few footnotes. First, it’s worth noting that I carried out this test on the 4GB version of the new Raspberry Pi; when I attempted it on a Raspberry Pi 3 Model B+ with 1GB of RAM, the benchmark crashed owing to lack of memory. 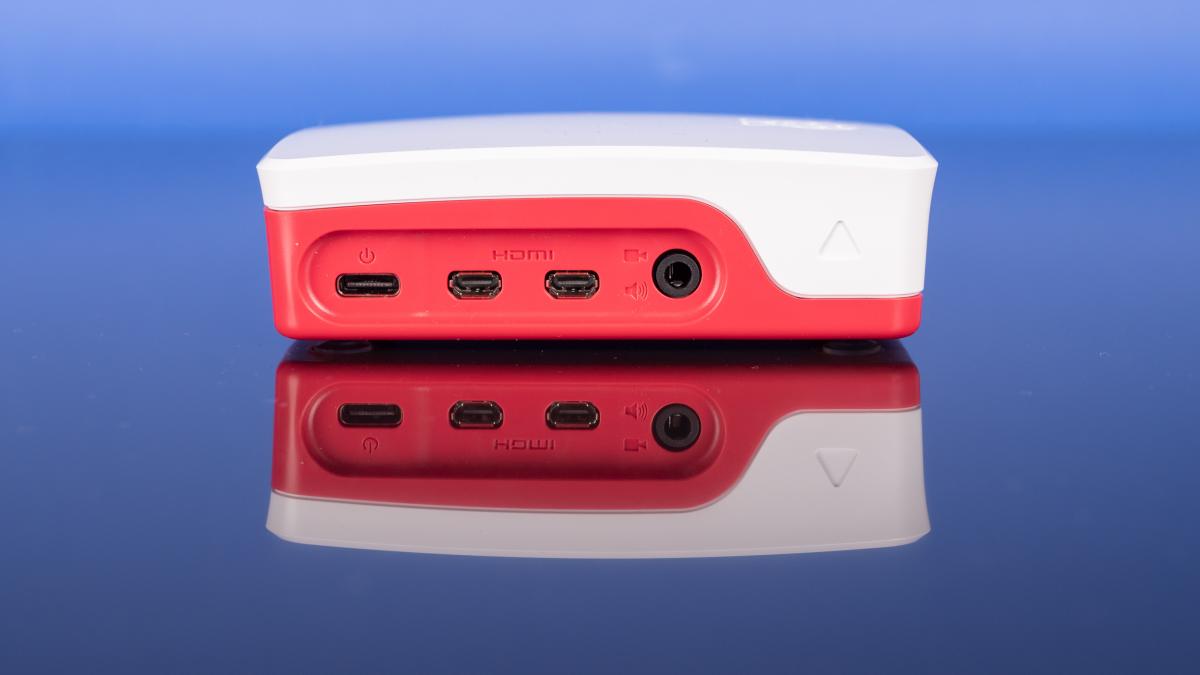 I should mention too that, while I made sure to launch each benchmark from a cool state, the Pi gets hot quite quickly under this sort of intensive load and the thermal throttle warning popped up several times during these tests. The Pi doesn’t come with a heatsink or fan, but you could evidently improve performance for this type of workload by adding one. You still wouldn’t get anywhere near to the performance of a typical Windows desktop, though.

I found myself also wondering whether things could be improved by reducing the Pi’s reliance on low-bandwidth microSD storage. Since the Raspberry Pi 4 gives you the option of connecting high-speed external media via USB 3, I experimentally tried repeating the image-editing test with the source and destination files located on an external SSD. In the event, this made very little difference: the test score was lifted only fractionally to 5.3. 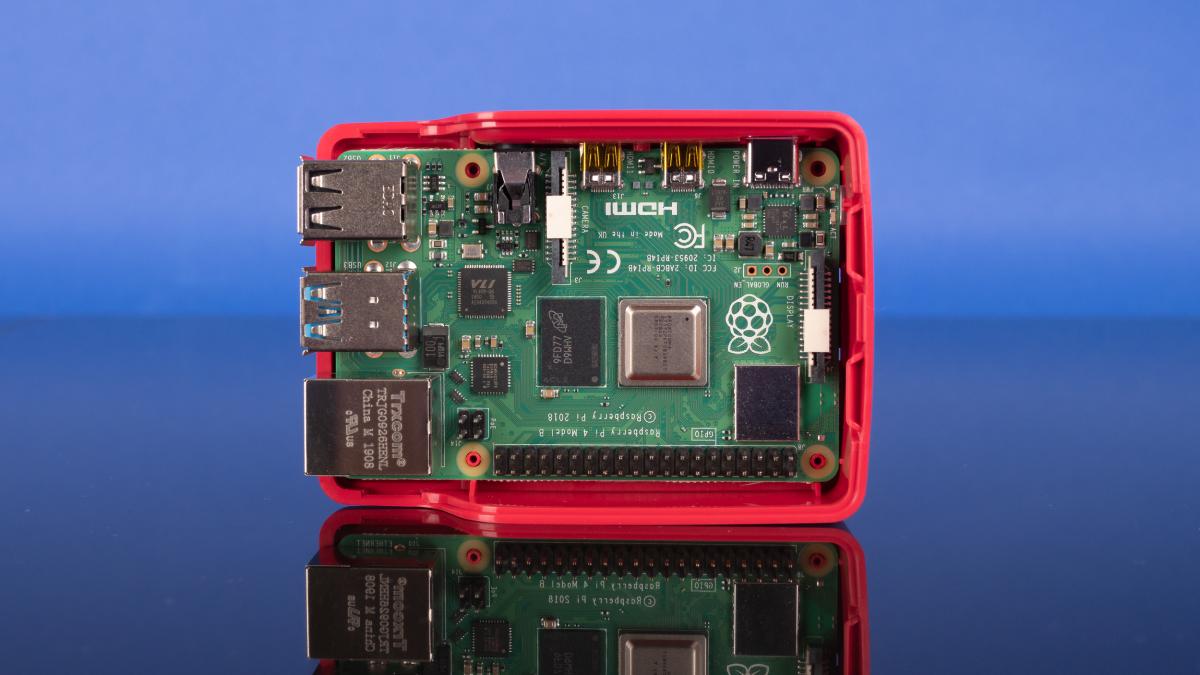 Is the Raspberry Pi 4 Model B viable as a desktop PC? Well, perhaps. As you move around the Raspbian desktop everything feels slick and responsive and the enhanced video hardware lets you enjoy HD movies on one monitor while you’re working on a second. If you go for the 2GB or 4GB model you can open a decent number of browser tabs too.

Yet while this is the fastest Pi ever, it’s still far slower than a mainstream desktop. That may not be apparent when you’re writing emails or composing clerihews in LibreOffice but kick off a medium-weight workload – such as editing a photo, encoding an MP3 or Zipping up a bundle of files – and the performance gap is unmissable. It may be only a few generations before the Pi really can be called a mainstream personal computer but we’re not there yet.

So let’s set aside such unrealistic ambitions. The Raspberry Pi was originally conceived as a fun, accessible and, above all, affordable platform for programming, home automation projects, or simply tinkering with Linux. The Raspberry Pi 4 Model B does all of that in a package that’s slicker and more versatile than ever, for the same rock-bottom price as the original model.

Look at it like that and it’s impossible to feel disappointed. No, the Raspberry Pi isn’t ready to replace your main PC but, on its own terms, it’s a fantastic update to what was already an irresistible little computer.

Don't miss a deal at Newegg
Best offers at Udemy
Discounts, Sales and Deals at Marks and Spencer
Save your money with Groupon
Online-Shopping with O2 Mobile
Best products at House of Fraser
Latest Posts