Want to use smart home tech to automate your watering, system but you’re not in love with the price tag that comes with top smart sprinkler controllers? Check out the Rachio 3e, a stripped-down version of the Rachio 3, that costs just $130—$60 less than the current price of the eight-zone version of its more sophisticated sibling.

It’s the same hardware (the only visible difference is that the 3e is gray while the 3 is white), but the capabilities of the 3e are a bit more limited. What do you not get? Support for HomeKit, integrations with a lot of smart home gear (including Rachio’s own Flow Meter), and the Rachio Yard Map, which lets you graphically set the boundaries of your lawn. The Rachio 3e’s Weather Intelligence feature (which automatically skips watering on wet days) is less hyperlocalized, and there’s also no 16-zone version available, as there is with the Rachio 3.

Admittedly, you’re not missing out on a lot. HomeKit adds little to the Rachio experience, and I’ve yet to find any legitimate need to sync my sprinkler controller to my smart lights. Also, the 3e does still support Alexa and Google Assistant as well as IFTTT, so if you really need to integrate it with another device, you can probably find a way to make it happen. Other than these few missing features, you won’t find any other major differences between the 3e and the 3—although Rachio warns that future features developed for the 3 might not be extended to the 3e.

I did have some unusual setup hiccups with the 3e. While the wiring of the sprinkler leads was as simple as it is on the standard Rachio unit—the 3e uses the same easy clip-on system for your wiring—the app struggled to register the unit wirelessly. Scanning the bar code with my camera didn’t work at all, and it took several tries of manually entering the unit’s serial number before it connected to the Rachio app. It took another four tries from there to get the unit to connect to my Wi-Fi network.

As well, somewhere along the way, the wizard-based setup routine died, and I later had to manually enter all the information about my watering zones in Rachio’s settings instead of following the usual guided tour. For a seasoned Rachio user like me (this is the fifth model I’ve tested), it wasn’t difficult to figure out, but new users may be stymied by what can be a fairly steep learning curve.

Other than some setup headaches, I encountered no trouble in day-to-day use, from scheduled waterings to manual runs, as the 3e is indistinguishable from the 3 within the Rachio app. And Rachio continues to update its app regularly, taking baby steps toward making the system easier to use by un-burying the most commonly used features. 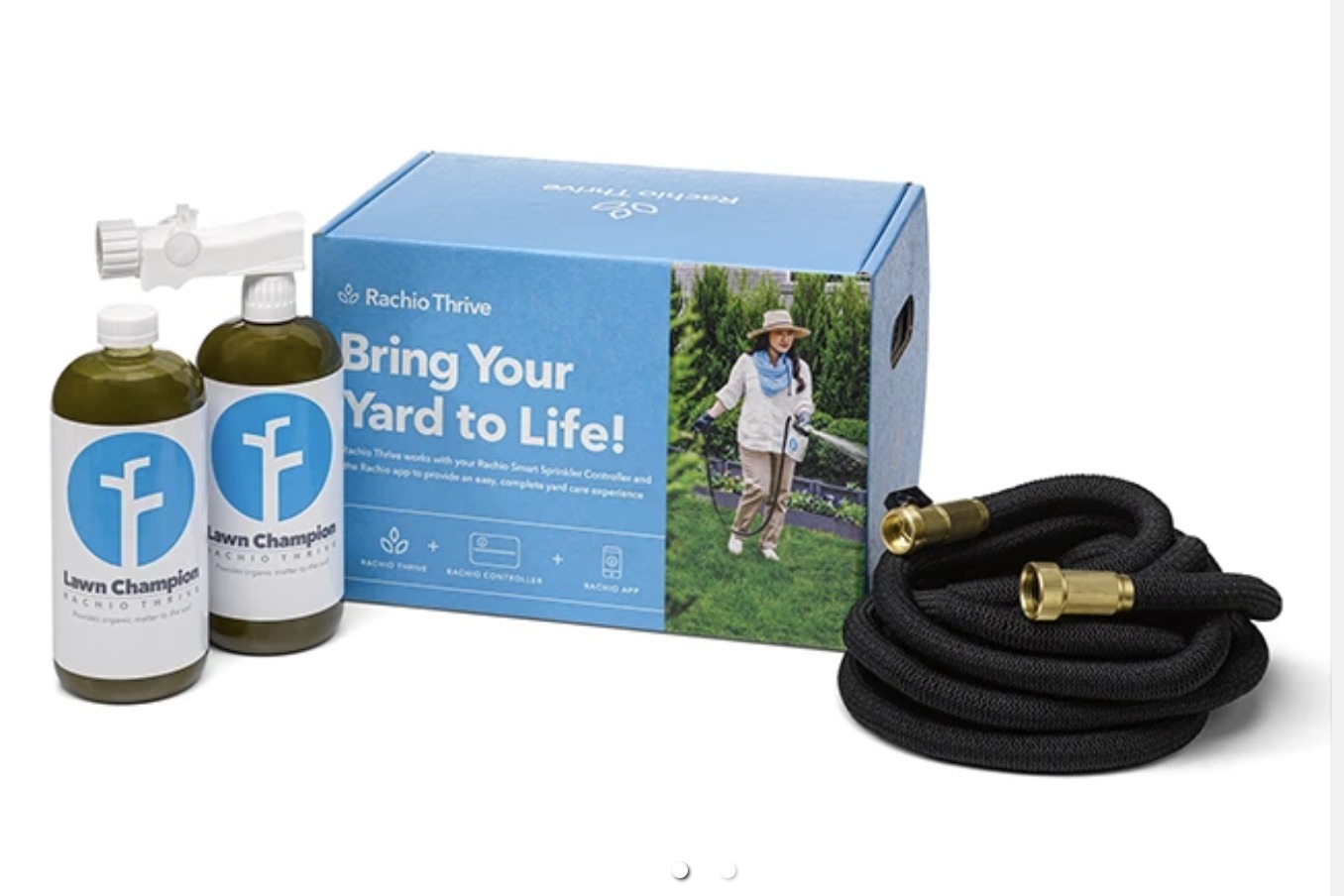 The other new feature withing the Rachio ecosystem—whichever model you have—is the introduction of Thrive, a completely optional, subscription-based liquid fertilizer concept. With Thrive, you plug in your address and outline the shape of your yard on the Rachio website. The company crunches the numbers and determines your soil type based on your location, then sets you up with a kit that includes an expandable hose (up to 100 feet in length), applicator nozzles, and several bottles of Lawn Champion, its homegrown fertilizer which looks a lot like the “green juice” that you’d get at Whole Foods. Lawn Champion isn’t your typical fertilizer; it’s a natural, kid/pet-safe product that includes “microalgae and other nutrients [that] feed healthy microbes in your soil to create a living environment plants love.” So, better than Brawndo (despite the absence of electrolytes). 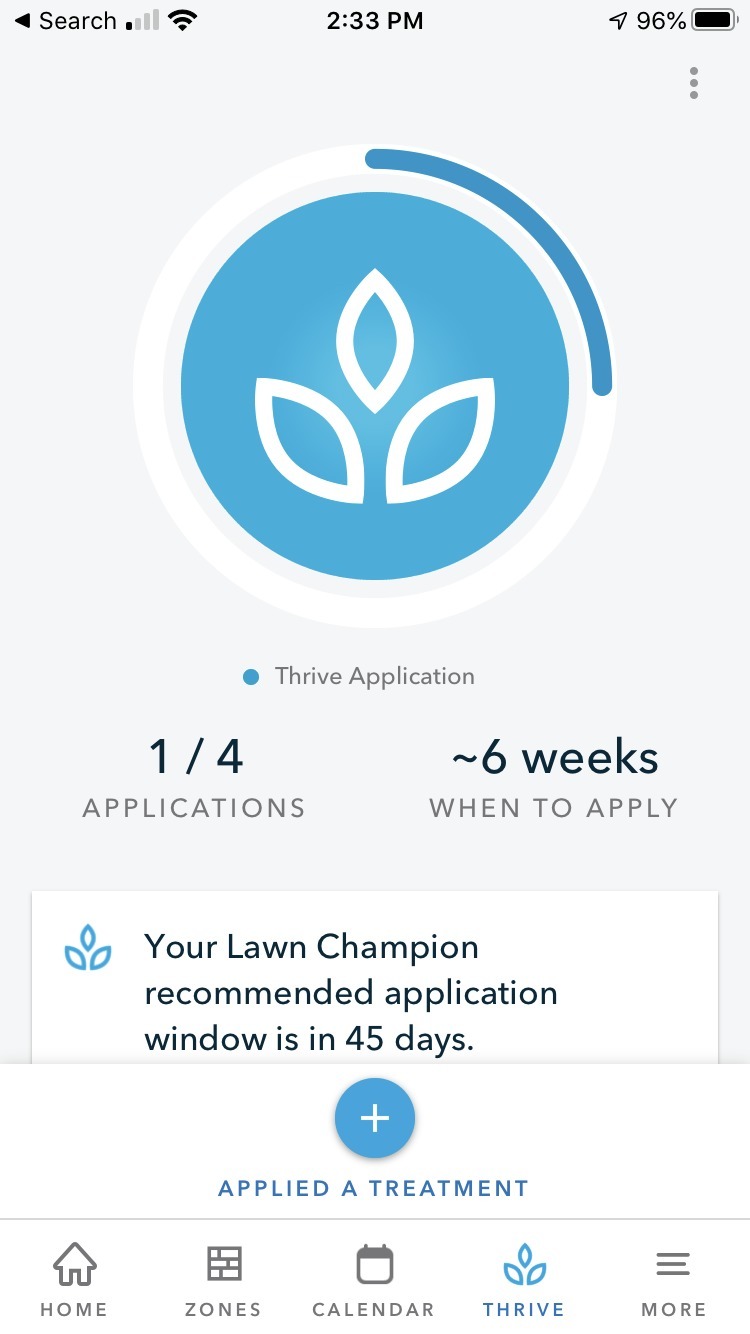 Thrive is built into the Rachio app, which alerts you to apply the stuff to your lawn roughly every 45 days. This is easy to do: Just attach the hose to any outdoor spigot and connect the applicator to the other end of it, then “paint” your yard. The only trick for my home was that my watering zones are spread out piecemeal over an acre of land, and while the expanding hose is of high quality, there was just no way for me to reach all of it, even if I moved the hose around to various spigots on the property.

Thrive subscriptions are priced depending on the size of your yard, and you’ll need to use Rachio’s online calculator to get a customized quote. I ran a few sample yards and found that, for a small lawn (1,500 square feet), a 90-day supply (two vials with treatment every 45 days) will run $104, then $85 for each 90-day shipment that follows. For a very large yard (11,000 square feet is the maximum size allowed), Thrive quotes $190 for the initial 90-day subscription, then $155 for each subsequent 90-day shipment. No matter how big your yard is, the pricing seems on the high side. (You can also purchase your replenishments in advance as part of a 30-week supply that contains five vials instead of two.)

How well does Lawn Champion work? A week after applying it to a wide range of plants, trees, and shrubs, I can’t say that I notice any definitive difference in my garden, though it’s still early in the season. If things change dramatically—and especially if things start dying—I’ll be sure to revisit this review later in the summer.

Rachio strips down its model 3 and slices a third off the price tag; you probably won’t miss the features that got axed unless you need to irrigate more than eight zones.

Don't miss a deal at Argos
Best offers at Sky
Discounts, Sales and Deals at Microsoft Store
Save your money with Surfdome
Online-Shopping with EBay DE
Best products at Bodybuilding
Latest Posts