The Q90 by Powkiddy is yet another portable device for lovers of handheld retro gaming emulation. Priced affordably at $36 on Powkidy.com (sic), it comes with some nice features and a nice build quality. But like all the products on the market today you still have to deal with some quirks. This tiny handheld emulator is worth checking out, especially given its price, though it falls short in some key places.

In my opinion the real competition in this $30 space is the PocketGo, which I reviewed last year and continue to use even though I own more powerful hardware. The Q90 boasts a number of upgrades over the PocketGo and should be considered when looking for such a small and cheap device. 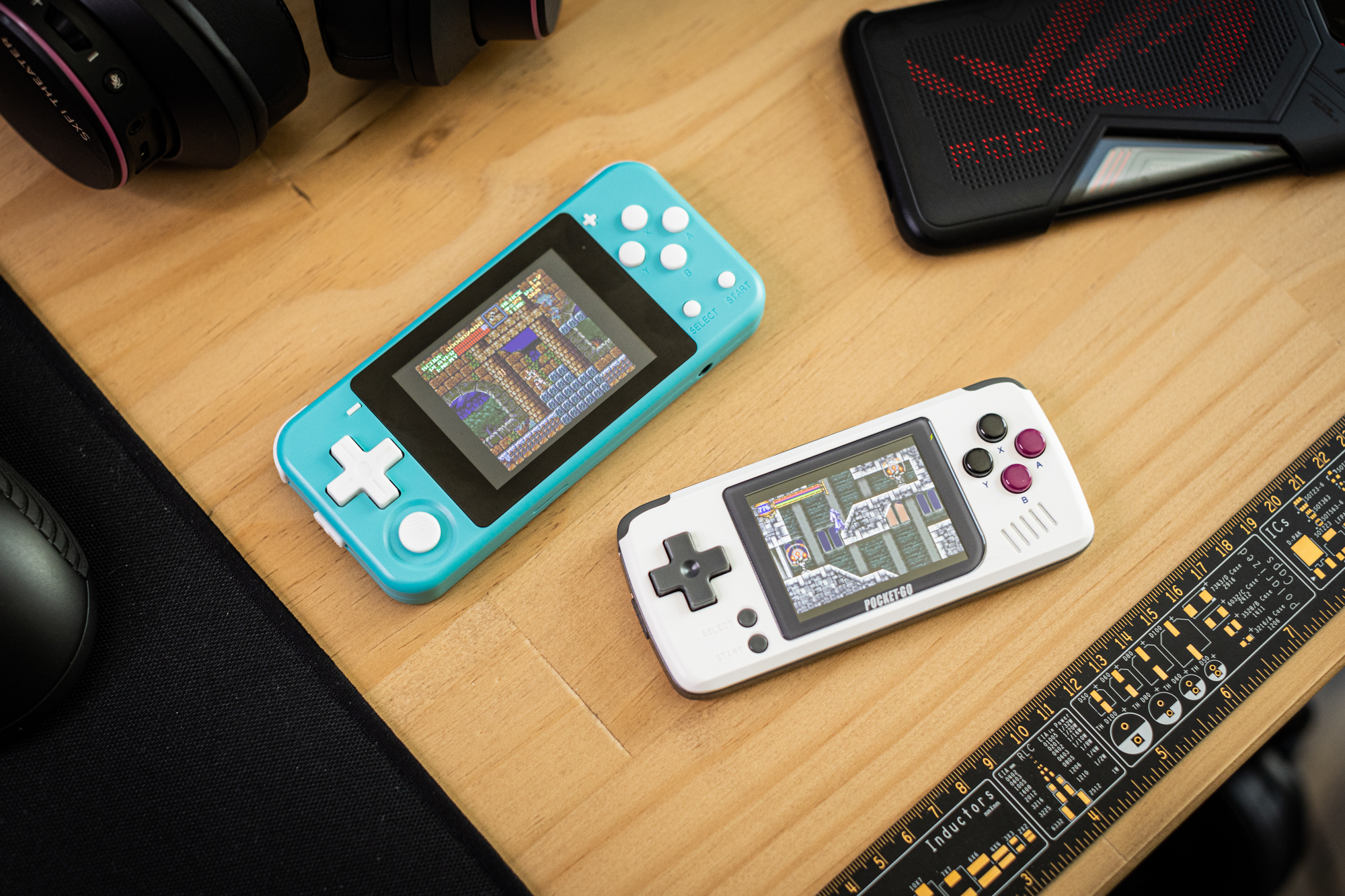 The Q90 improves upon the PocketGo in overall size. The PocketGo is super-small at roughly 12.5 x 5.5 x 1.5mm. While that petite size helped with portability, the device could cramp up my hand after long gaming sessions. The thicker Q90, at roughly 13.8 x 6.5 x 1.8mm, helps for those longer gaming sessions but is still small enough to throw in a pocket. When it comes to physical size I give the edge to the Q90.

When we get to the screen, bigger isn’t necessarily better. Both devices feature a 320×240 IPS panel, but thanks to the bigger size of the Q90 the screen is bigger, too—3 inches diagonal, vs 2.4 inches on the PocketGo. While that difference doesn’t seem like much, that extra half-inch or so does ease eyestrain over time.

Other than the size, however, the PocketGo’s screen is vastly superior: brighter, sharper, and with better off-axis viewing angles. Unless you must have a larger screen, the PocketGo wins here. 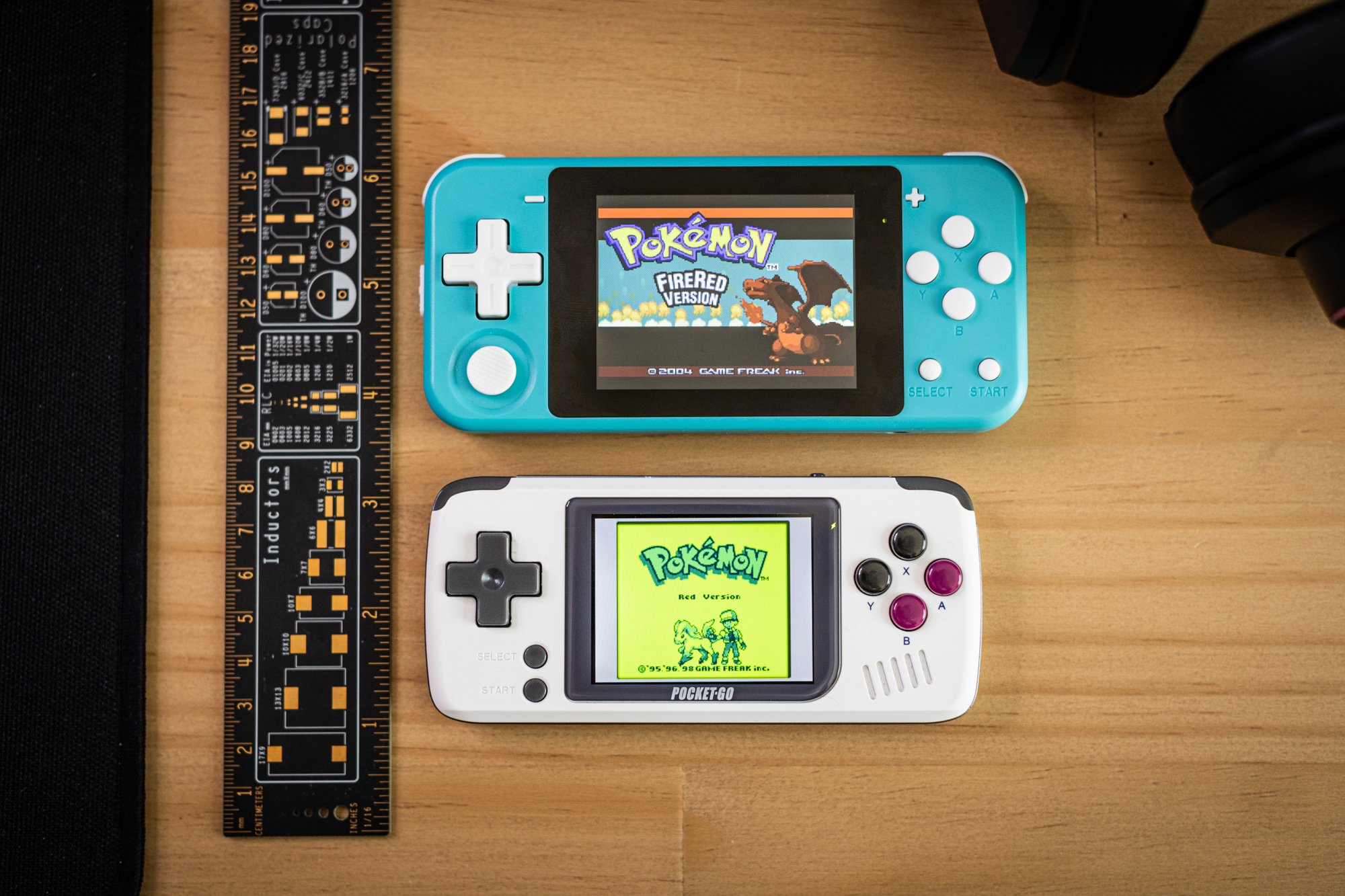 When it comes to inputs we see a few notable differences. In the Q90’s favor, it charges via USB-C, a welcome upgrade to the Micro-USB on the PocketGo.

The rest of the picture is more problematic. The buttons and d-pad on the Q90 are squishy and feature sharper edges, compared to the PocketGo’s clicky feedback and rounded edges. I’ve preferred clickier controls, so there is some subjectivity here. However, I also wasn’t a fan of the Q90’s thumbstick (on the left side) for use in supported games. It’s of the sliding variety, which means there is very little travel. Resistance is tight enough that it’s hard to slide in a smooth fashion.

In the audio department, both feature a 1/8-inch headphone jack. The Q90 has stereo speakers where the PocketGo has mono, and that seems like a plus. Unfortunately the Q90’s speakers are located on the back of the device, so the sound moves away from you, and can also get muffled by hand placement. The PocketGo is the better option if you don’t want to use headphones. 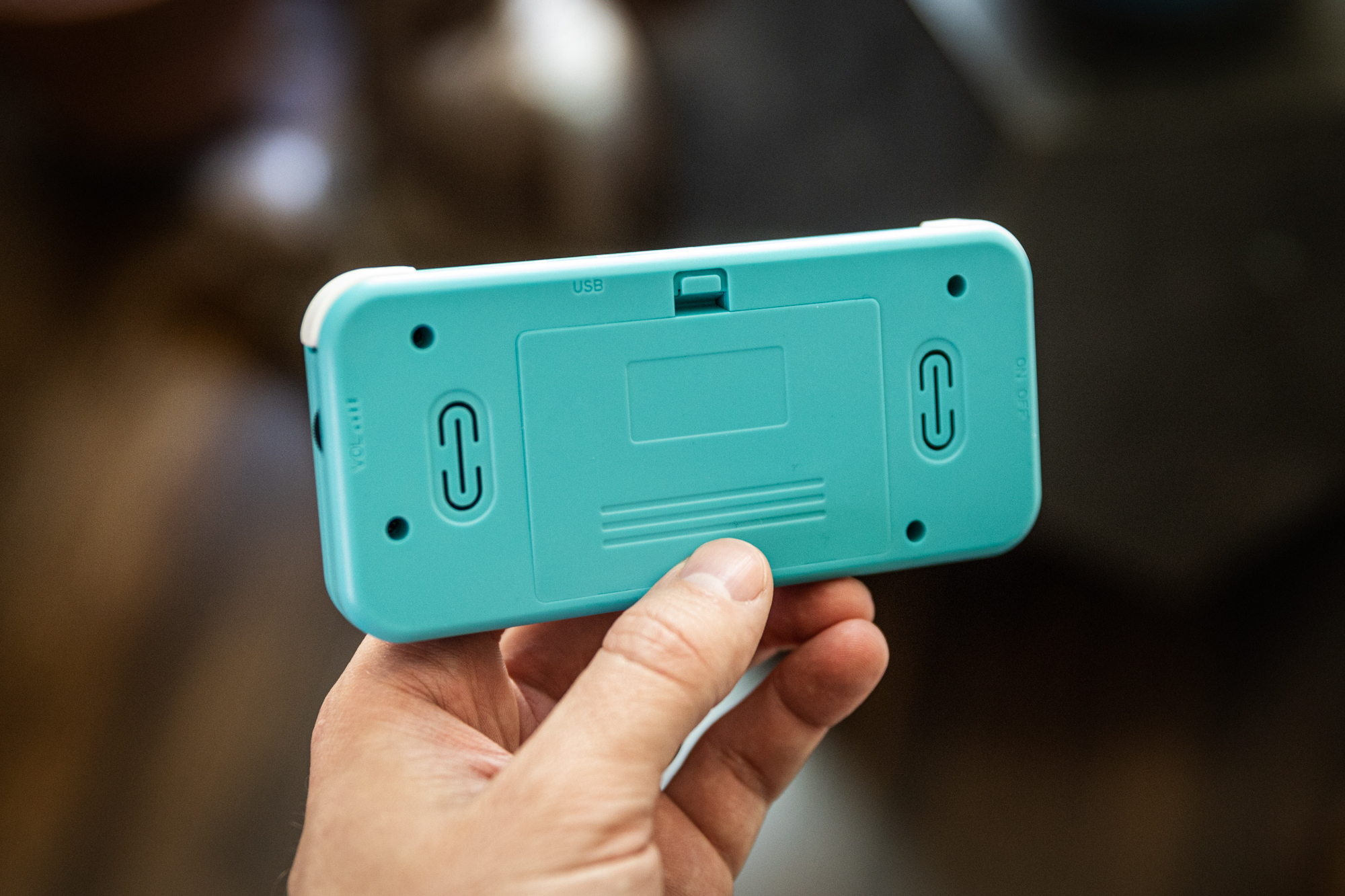 The Q90 does have a larger battery than the PocketGo at 1500mAh versus 1000mAh. While the larger screen negates some of those gains, the Q90 still lasted longer, so it earns the battery advantage. On top of that it’s easily replaceable compared to the PocketGo, which is always a plus in my book.

When it comes to hardware I think there are some great advantages the Q90 has over the PocketGo, most notably the larger screen, bigger battery, and more comfortable dimensions. But the PocketGo is superior when it comes to screen quality, button feel, and speaker placement.

The amount of emulators the Q90 supports is staggering (as with most of these devices), with support for GameBoy, GameBoy Color, GameBoy Advance, NES, SNES, Master System, Genesis, PC Engine, Neo Geo, Playstation 1, and more. Unfortunately performance in most of these emulators falls behind what you’ll experience in the similarly priced PocketGo. 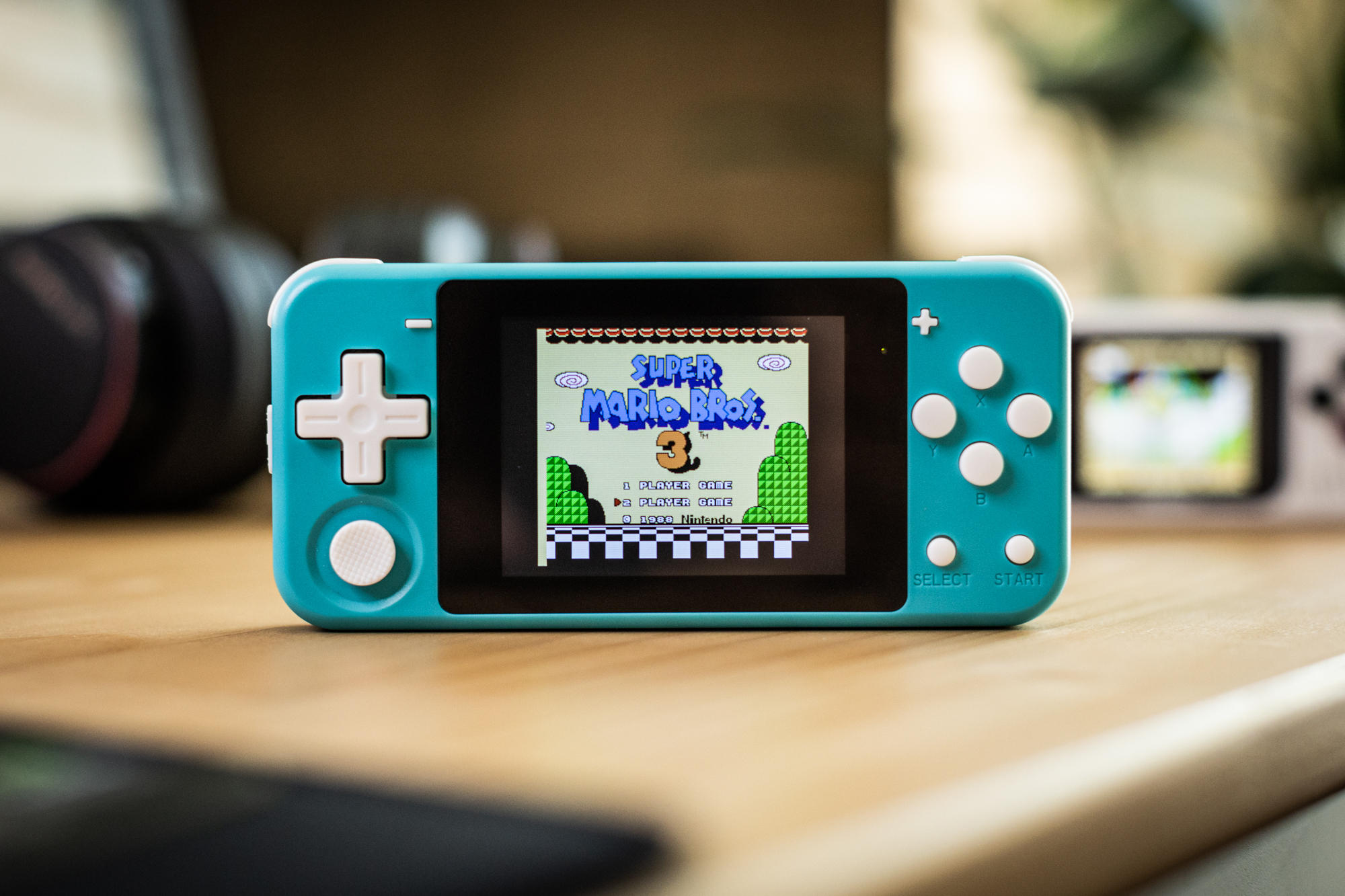 Both handhelds feature the AllWinner F1C100S CPU, which means more intensive SNES games like F-Zero ran at at stuttery, low frame rates that were nowhere near playable without tweaking in the emulator options. Same goes for more complex GameBoy Advance games like Metroid: Zero Mission and Castlevania: Aria of Sorrow —there were problems with screen tearing and audio drops in its default configurations.

For the most part 16-bit and below is a nice experience if you don’t expect emulated perfection, and I’ve been able to enjoy countless hours on the go. The PocketGo isn’t light years ahead of the Q90 on performance, but overall the older device gave me fewer hiccups and a smoother experience in many of my favorite games.

While the Q90 comes with a PS1 emulator, it’s rough going, with too many problems to list—I didn’t have a smooth play session with any of the games I tested. Even keeping my expectations low, Powkidy’s decision to include hardware features like an analog nub and rumble support probably drove up the cost unnecessarily. While I’m glad the option is there in case you are curious, I would turn toward more powerful hardware for a better 32-bit and beyond experience. 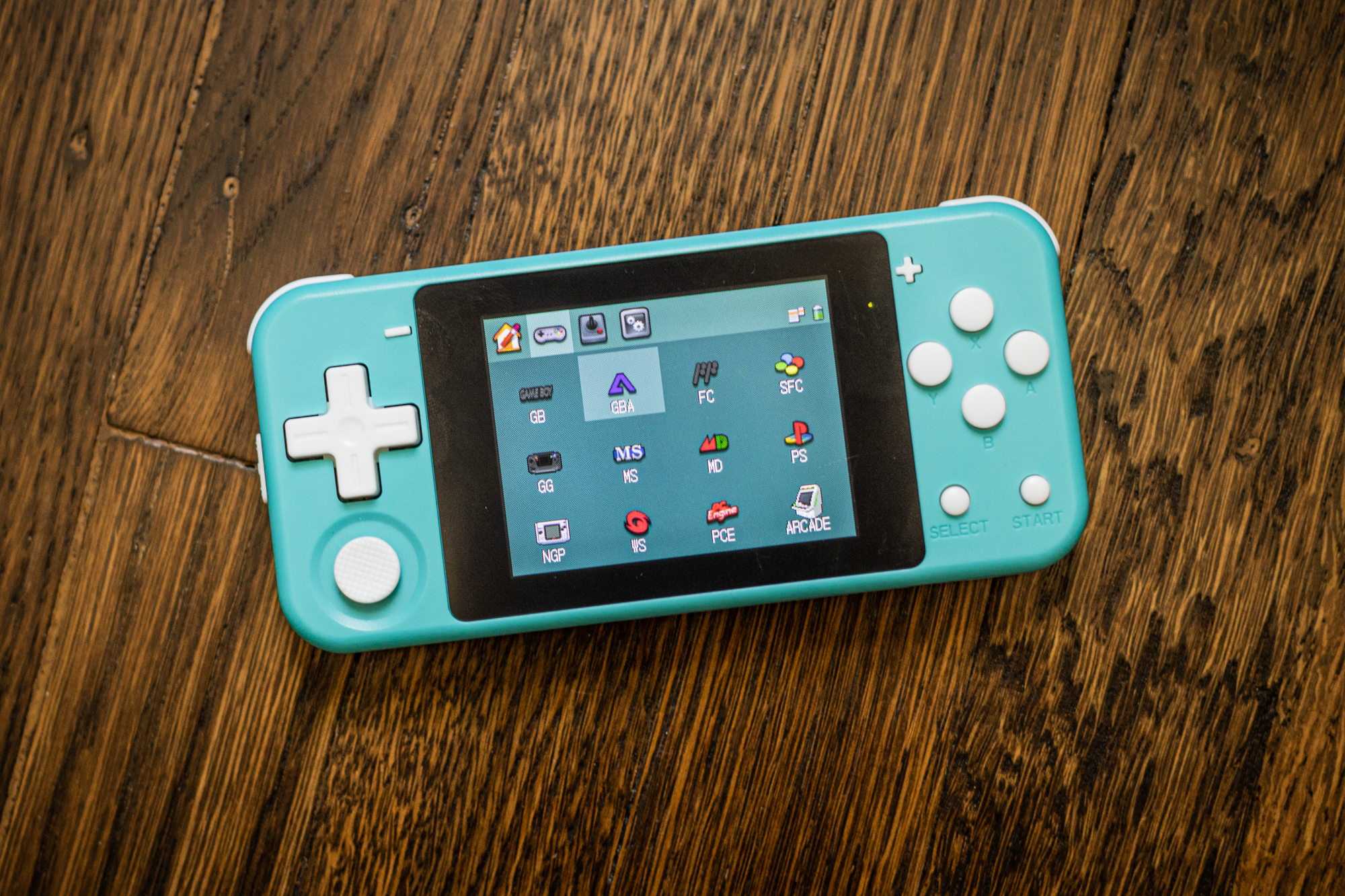 The Q90 ships with the NXHope emulator software as its front end. It’s fairly easy to navigate if you’ve used one of these portable emulators before. Button configurations change depending on context, so there is a learning curve. Overall, however, it’s equal to the front end of the PocketGo in almost every aspect, including an unhelpful battery status icon and complications with getting ROMs onto the device.

When it comes to performance there is plenty of fun to be had on the Q90, but for almost every game I played on both systems the PocketGo was the superior performer. If you are looking for the best performance, pick the PocketGo.

The Powkiddy Q90 has some great things going for it, including its cute design, larger screen, and more comfortable grip. It’s worth a look if you want a small portable emulator that has plenty of power to play most retro games up to the 16-bit era. But if you can tolerate the smaller size, I still think the PocketGo is the better option despite it’s age, because of its smoother overall performance and better hardware.

The Powkiddy Q90 is an affordable and attractive retro gaming emulator. Its larger display and overall size make it comfortable to use. It’s an option worth considering for 16-bit games, but its sketchy performance on 32-bit games limits its value.

Don't miss a deal at Newegg
Best offers at Vimeo
Discounts, Sales and Deals at O2 Mobile
Save your money with Sephora
Online-Shopping with Groupon
Best products at Adobe
Latest Posts